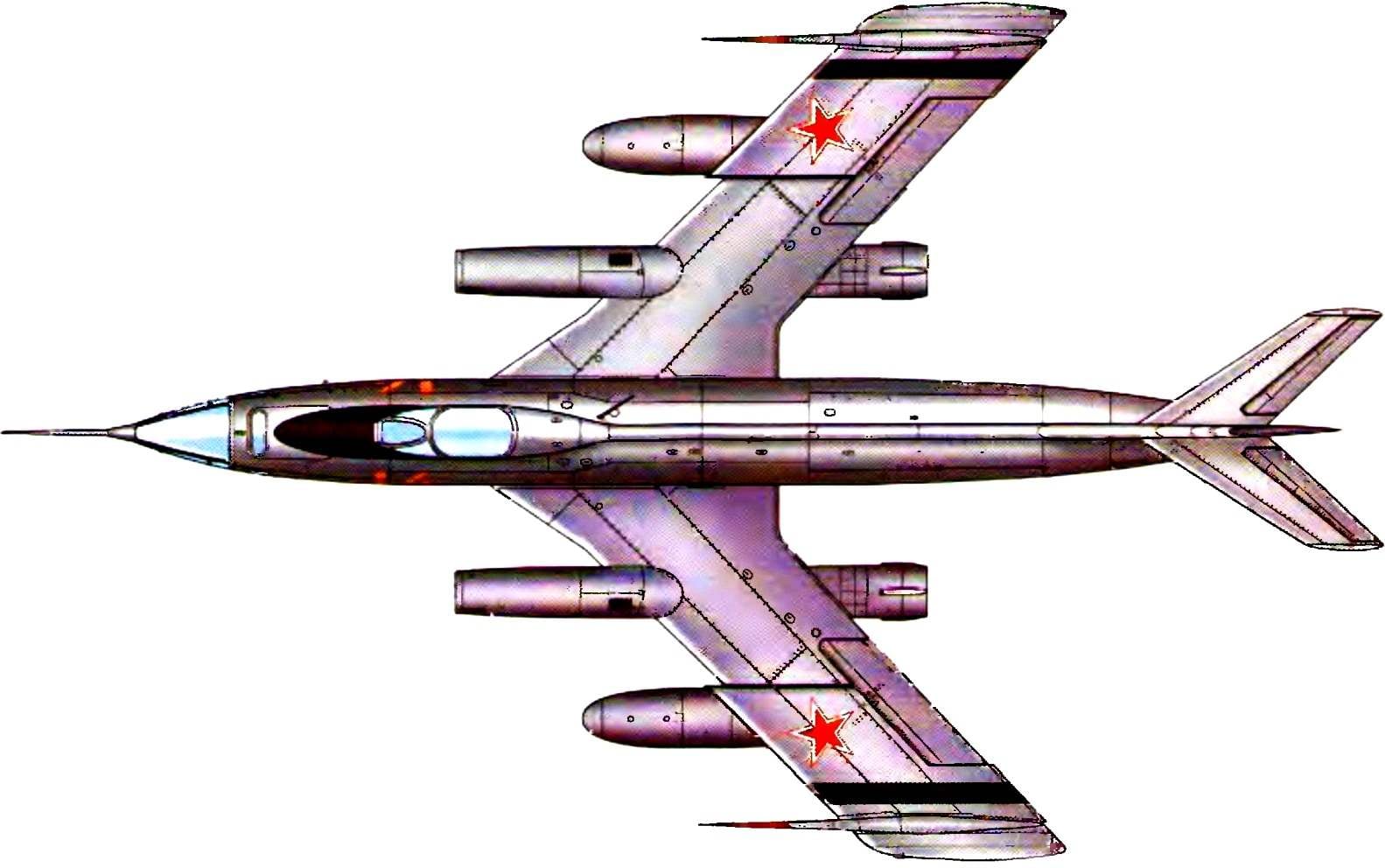 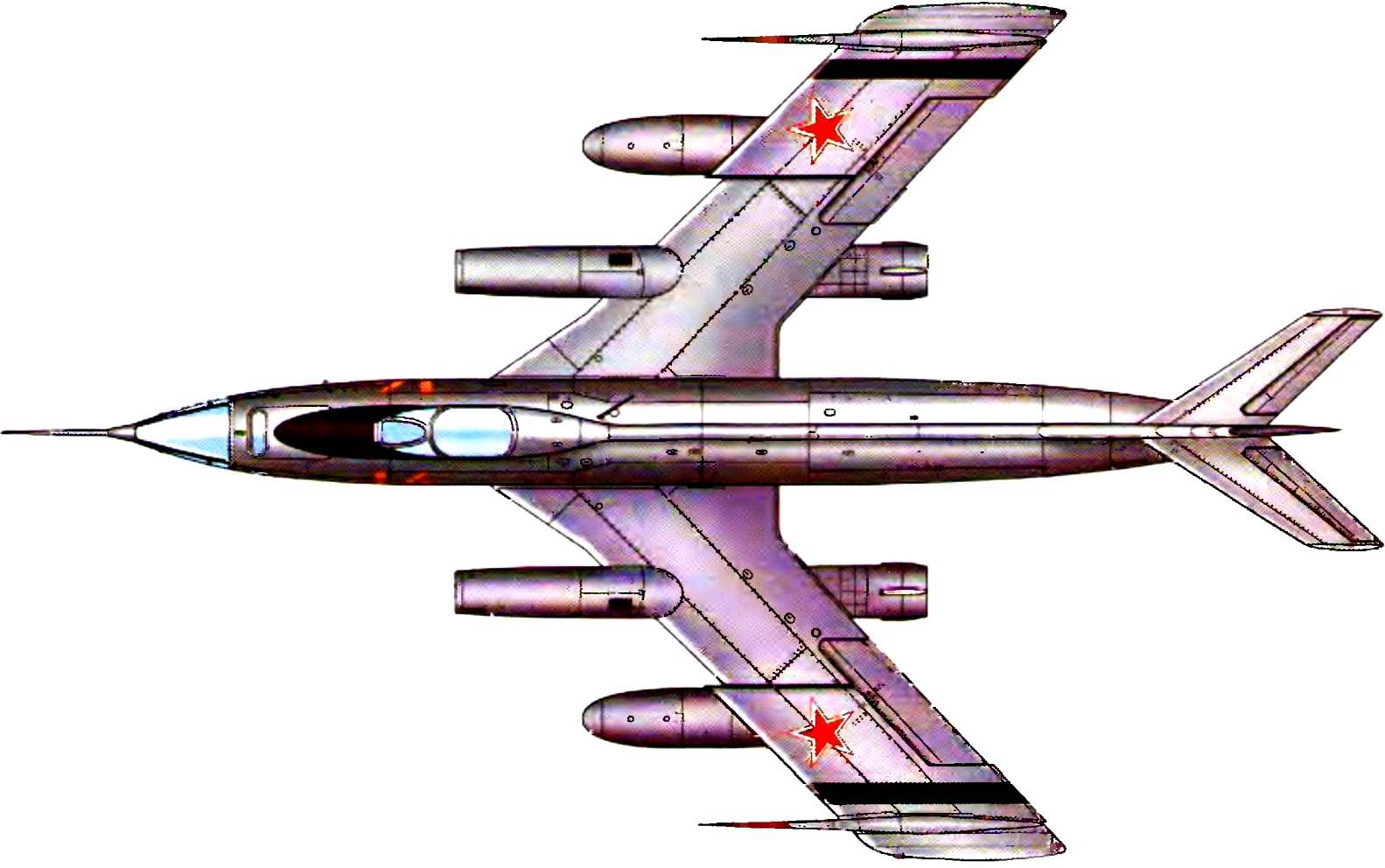 When creating almost any plane is always a desire to expand its functionality. So, the fighter may eventually turn into a fighter-bomber, a passenger airliner into a cargo and training aircraft in the attack.
Was no exception and loitering interceptor Yak-25. Large volume of the fuselage occupied by the radar gun, allowed to place it in the bow of the Navigator, and if the “press the” fuel tanks, it is possible for the cockpit to make a good cargo Bay for reconnaissance and bombing armament. So interceptor “120” became the reconnaissance Yak-25P bomber “125B”. But time passed, and the military needed a modern front-line supersonic car — the interceptor and scout. The basis for their development was the decision of the Council of Ministers of the USSR № 616-381 of March 30, 1955
The first of them received the OKB designation of “121” and in the series — Yak-27. Second — scout-fighter “122”, the future Yak-27R. They had a common airframe and were calculated under the RD-9. 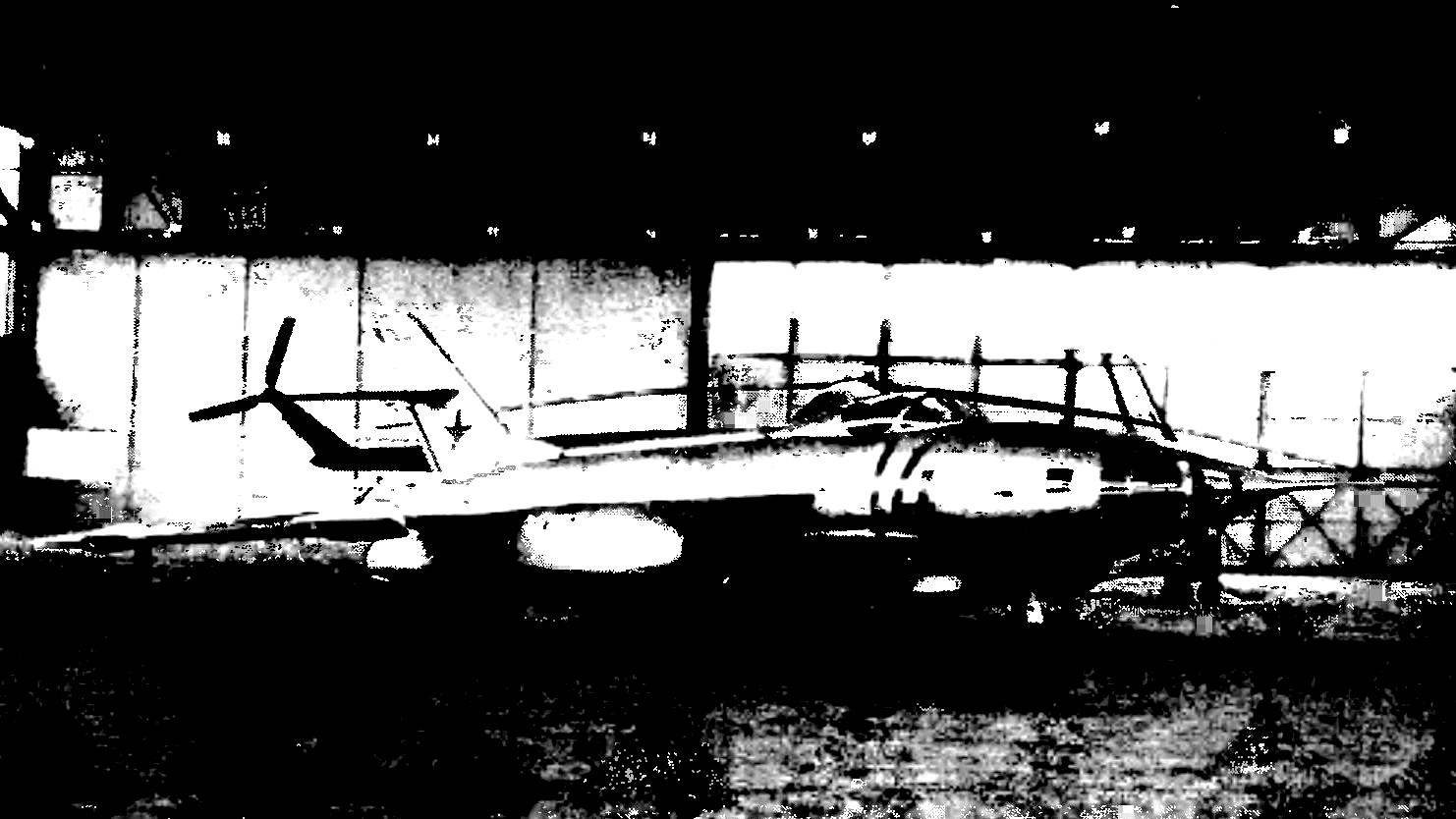 The reconnaissance plane Yak-27R in the exposition of the Monino air force Museum.
Loitering fighter
According to a government document, the interceptor, developed on the basis of the Yak-25M, was to reach a maximum speed of 1300 km/h at an altitude of 10 000 m, to get this high for 2.5 minutes, have a practical ceiling 16 000 — 17 000 m and fly at a distance up to 2000 km, while maintaining navigational reserve of fuel. The aircraft was required to install two guns caliber 37 mm, with a total capacity of 200 rounds, and 24 unguided rockets (NAR) the ARS-57 or two turbojet projectile TRS-190. In December 1955 the car you have to present at a joint with the customer of testing.
To achieve such performance was possible only by increasing the thrust and reducing drag coefficient. Since the main component of drag at supersonic speeds is a wave, then reduce it by increasing the sweep of the wing or decreasing its relative thickness. In OKB-115 new wing was designed in a hurry, without the necessary amount of research in design Bureau and TSAGI, while increasing its angle of sweep and reducing to 4.2 — 5% relative thickness. This progressive constructive solution in the domestic aircraft industry, as it turned out, for a long time delayed the time of finishing machines.
Prototype double fighter-interceptor Yak-27 was built in December 1955, It was equipped with engines RD-9AK thrust 3250 kgf (with afterburner), and two guns of 30 mm caliber. Factory testing of the airplane (the leading test pilot of the G. A. Tinyakov and tester, K. B. Bekibaev) was held from 25 Dec 1955 to 25 April 1956, They showed that the flight characteristics of the Yak-27 mainly correspond to the instructions, with the exception of speed, does not exceed 1235 km/h (M = 1,15). The flight duration was three hours at an altitude of 12 000 m.
The parameters remained as in the Yak-25. In the forward part of the fuselage placed the modified radar sight “Falcon-M” (“Sokol-2”). The plane was equipped with standard navigation and communication equipment, in particular radio RSIU-4, automatic radio compass ark-5, radar interrogator-responder, SRZO-2 and marker receiver MRP-48П.
That summer, the Yak-27 was demonstrated at air parade in Tushino, after which NATO experts have given him the code name Flashlight-C, which means “beacon” or “torch” (choose what like).
In 1956 began the factory tests of the second instance of the interceptor, but with uprated engines RD-9F and designed for the suspension of two guided missiles. From its predecessor the airframes were reinforced wing and adjustable stabilizer. Compared to the first car to maximum speed without missile armament increased to 1400 km/h service ceiling brought up to 17,000 meters, the flight duration up to 2.5 hours.
During the tests, the interceptor has identified the Aileron reversal associated with insufficient rigidity refined wing. To increase means to increase the mass, which in turn would lead to lower performance. This task was solved by other means. With the wing removed the cantilever flaps and ailerons moved closer to the center. In addition, imposed additional speed restrictions. This work was performed in accordance with the order of the State Committee on aviation technology (GKAT) No. 622 dated 20 December 1956
It should be noted that in the same year, under the leadership of N. V. Grigorieva, studies were conducted on the deflection of the thrust vector of the engine to increase the ceiling of the plane. With this purpose made nozzle for nozzles with fixed angles of deflection of the jets, but in flight it’s a novelty, and not checked.
In 1957, at the Saratov aviation plant started the production of a pilot batch of Yak-27 with a modified wing, and the first machine flew pilot M. M. Chuvin.
January 31, 1958, during a routine flight accident the Yak-27 (serial No. 0103 with modified wing), released 30 December 1957 and fighter jet flown by a factory test pilot A. I. Grishin (Navigator Petlyakov). When landing, the aircraft was in a descending tray, the air hitting a pole tram wires and break the wires of the telephone line and landed before reaching the airport. After three and a half months the same pilot on the Yak-27 (serial No. 0203) due to false alarm of “fire left and right thrusters” landed with landing gear. 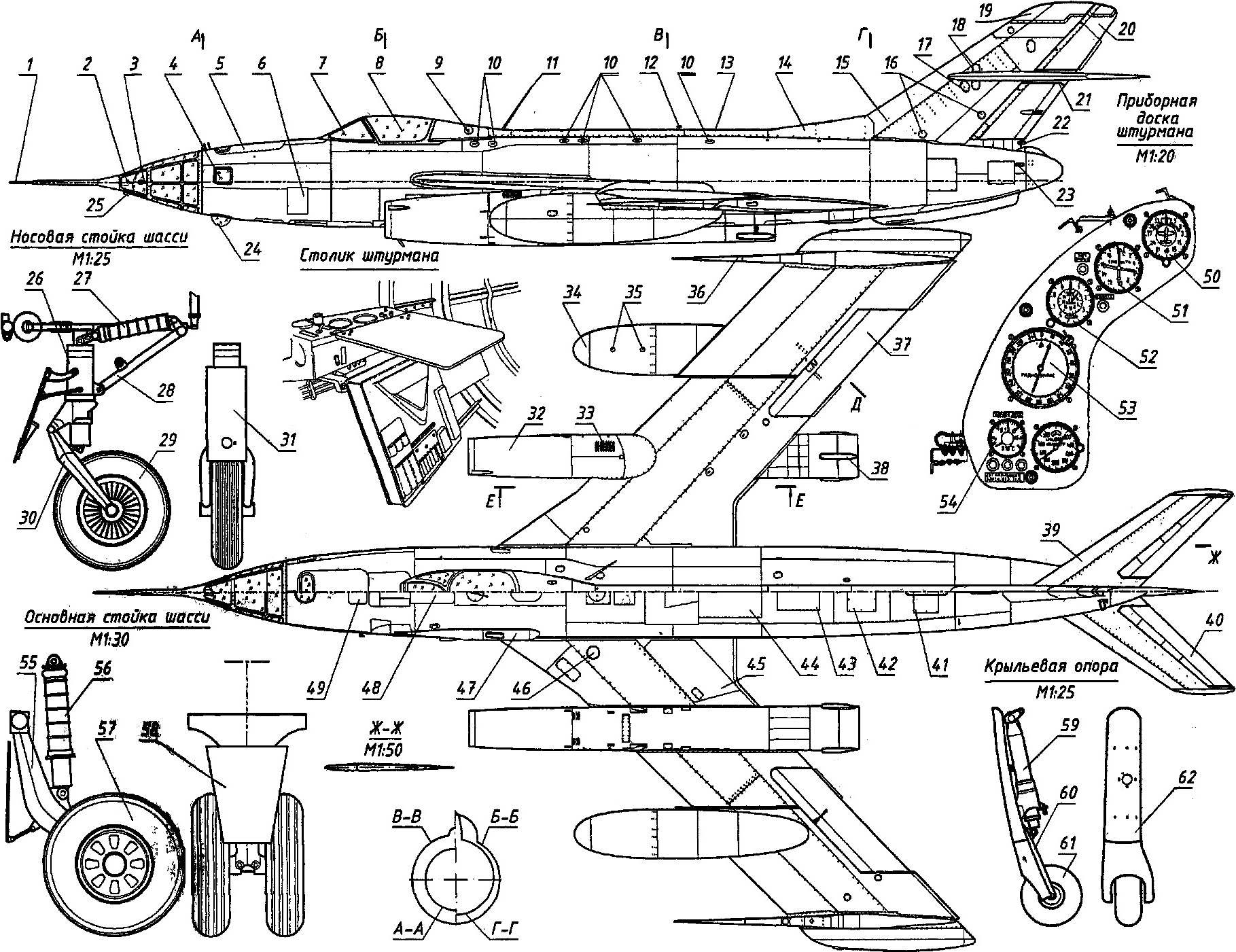 The Yak-27R from the TV intelligence apparatus “Burevesnik”.
According to the results of state tests, experts recommended to launch the Yak-27R in series production, but with the removal of the defects.
In the spring of 1959 the air force Institute for control tests showed serial Yak-27R (serial No. 0102) manufactured by Saratov plant № 292. Compared with the prototype of the Yak-27R with tail number 02 for serial car in the rear fuselage mounted brake parachute PT-5240-57 with the dome area of 15.5 m2, removed the back seat of the Navigator and perekomponovkoy some equipment. Then mounted the device mechanical lock of the nose landing gear lever in the cockpit, a whip antenna of the command radio RSIU-4B placed on the keel, instead of a radio altimeter low altitude RV-set RV-2 changed the location of the antennas of the responder identification SRO-2. On the right side of the fuselage appeared a stub antenna connected radio 1РСБ-70M.
On serial Yak-27R blister viewfinder PV-2 was moved closer to the Cup seat of the Navigator 32 mm, installed more convenient ejection seat for the Navigator with the modified harness system, hydraulic motor GM-08 in the structure of the permutation stabilizer was replaced by the GM-36.
To increase the range in 1962, the aircraft with serial No. 0710 equipped with hardpoints under the wing of two resettable in flight fuel tanks. The car has passed the tests, and external fuel began to set on the scouts, from 14 series.
The production Yak-27R was carried out in Saratov from 1958 to 1962 and During this time has built 165 aircraft.
Basic data of aircraft-Yak-27

The Yak-27R started in the 47th separate guards reconnaissance regiment (ograp) at the airport Shatalovo in Smolensk region. The main event in the 47th ograp in 1960 were military tests of the Yak-27R, held from April 10 to October 1.
According to the results of military tests, the customer made a comment, inviting industry to equip the Yak-27R radar gun RBP-3 and night equipment illumination purposes. The design Bureau of A. S. Yakovlev tried to solve the problem, but to equip the aircraft with such systems is not reached through no fault of OKB reasons.
After the 47th ograp Yak-27R mastered several regiments. The last aircraft was seen in flight in the mid-1970s To the present day survived only five Yak-27R. One of them are in Monino air force Museum and Khodynka in Moscow and three in Germany. 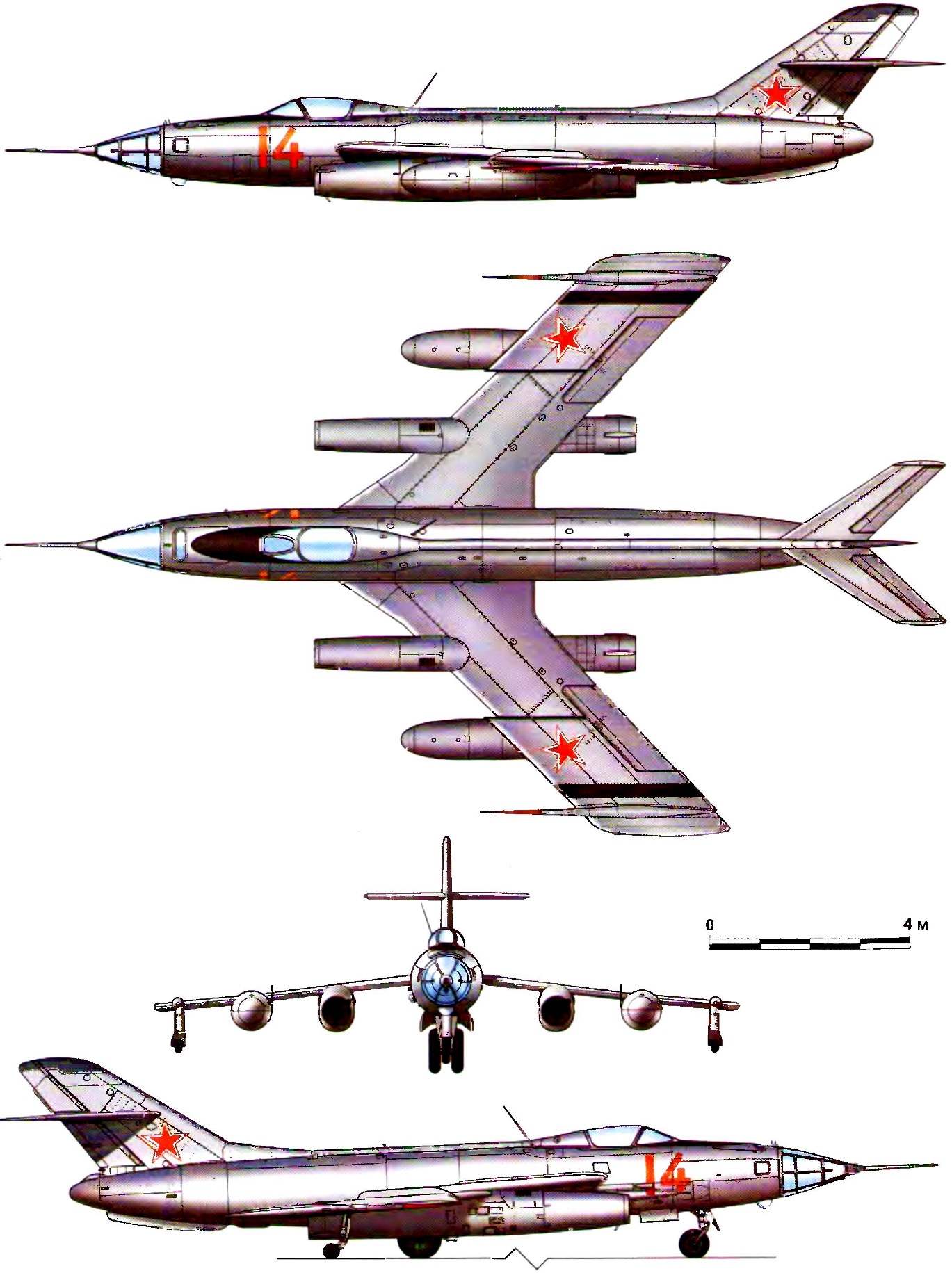 The reconnaissance plane Yak-27R.
The first domestic supersonic reconnaissance aircraft, the Yak-27R was after the Il-28R next step for transition to the air force on more sophisticated machines Yak-28R and MiG-25RB. Although the aircraft did not fully comply with the requirements of the military early 1960s, but he did the most important thing — it is a good school and we have the necessary experience of hundreds of specialists of the air force, which subsequently make it easier to learn new scouts Yak-28R.
N. YAKUBOVICH