The Grumman F6F HELLCAT. Analysis of the results of air combat in South-East Asia with the participation of the new Japanese high-speed fighters allowed American experts to draw a conclusion about necessity of creation in the US carrier-based fighters with higher performance. Orders to create prototypes were issued to multiple firms.

At the end of June 1941 the order received and firm Grumman: she was instructed to modernize its fighter F4F WILDCAT. It was assumed the construction of two prototypes under the new 14-cylinder radial engine Wright R-2600 CYCLONE takeoff power HP 1622 the First of the prototypes XF6F-1 was supposed to equip with engines R-2600-10, and the second XF6F-2 — improved version with a turbo R-2600-15.
When creating a new aircraft design team of the company under the leadership of L .The Grumman and W. Swindler made to the layout F4F many changes and new technical solutions.
Thus, the weight of the fighter has increased 60 percent compared to the F4F, which forced designers with the aim of preserving maneuvering characteristics to increase the wing area. The car received the fuel tanks of greater capacity and enhanced service. The cockpit was raised and is positioned over the fuselage fuel tanks, which improved the overview of the front hemisphere.
Fly the first prototype XF6F-1 was performed on June 26, 1942 S. converse, the participant of fights on the Midway. In his report he pointed out the need to install a new engine Pratt and Whitney R-2800 power 2028 HP instead of the Wright R-2600 CYCLONE. Engine R-2800 has passed successful tests on the first copies of the Corsair fighters, and it was installed on the prototype of the XF6F-3, test flown on 30 July 1942. The first flights showed that the aircraft as a whole was a success, and it launched into serial production.
The construction of the second prototype XF6F-2 was delayed, and its first flight took place only on 7 January 1944. One of the two prototypes XF6F-1 with the engine R-2800-27 and four 20 mm guns, designated XF6F-4, was test flown on 3 October 1942.
Immediately after the start of serial production of aircraft F6F-5 two of them were equipped with four-bladed propellers and engines Pratt and Whitney R-2800-18W takeoff power 2129 L. S. the First of these experimental machines — XF6F-6 — flew on 6 July 1944. The fighter showed the highest rate of all the prototypes and production F6F—671 km/h at a height of 6710 m. the Second instance flew on 30 August 1944.
After comparative tests it was decided to start serial production of the XF6F-3, fully met the requirements of the customer. The contract for serial production of the aircraft, the designation HELLCAT, was signed with the firm even before the start of flight testing — may 23, 1942.
Preparation for serial production was deployed in long island in August 1942. Installation of the ramps began in October and, without waiting for completion of the work, started assembling planes HELLCAT.
The first production F6F-3 was collected at the operating enterprise of the company Grumman in Bethpage. In parallel with the serial production were conducted and army trials. In one of such flights have the first production F6F-3 HELLCAT in developing aircraft carrier landing broken landing hook. This accident forced the engineers to strengthen the attachment of the hook, and then having trouble with it never happen again.
In the production process in the design of the aircraft was continuously altered. Thus, the antenna of the radio installed without tilting, the barrels of the guns closed profiled fairings, removed the bottom fold of the cooling channel of the engine. 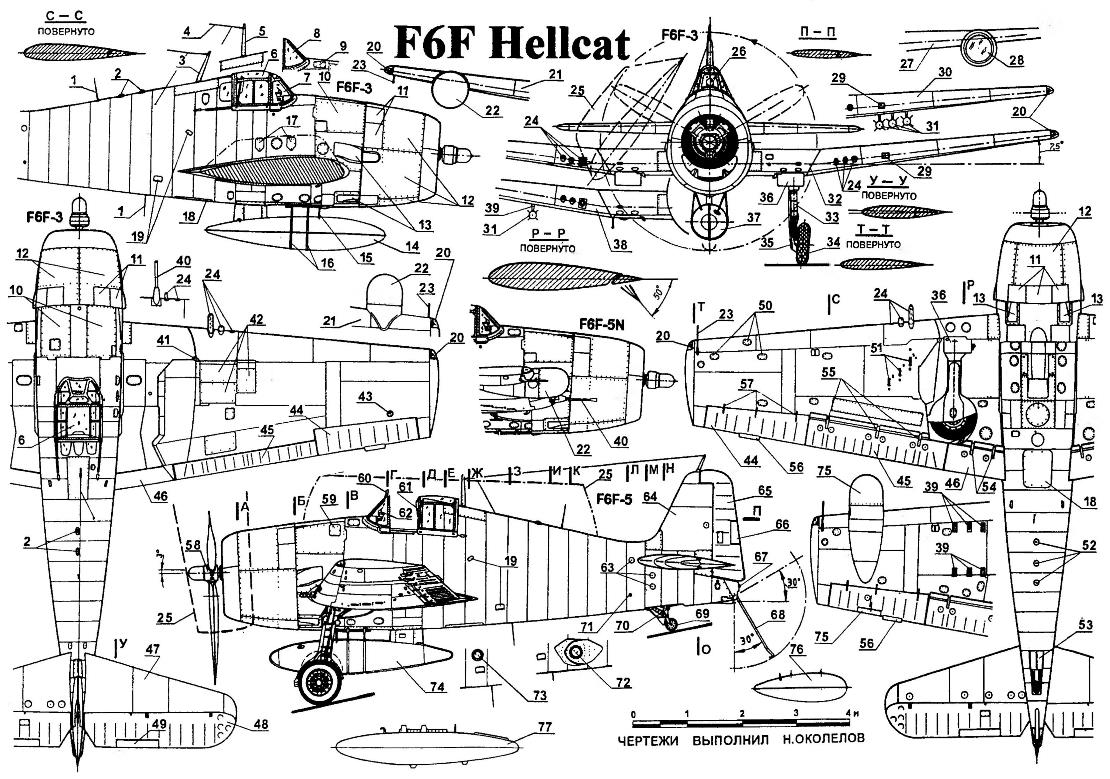 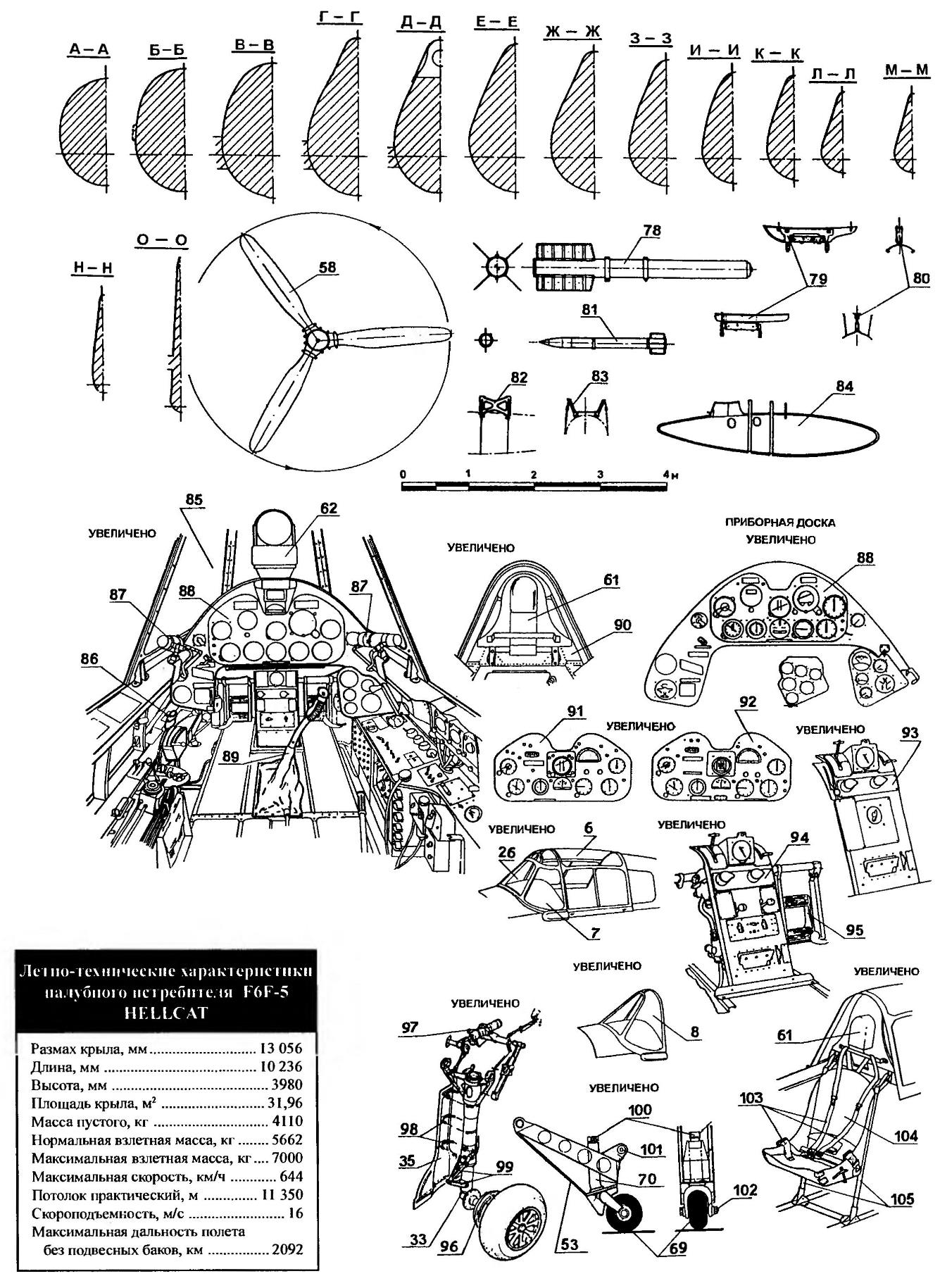 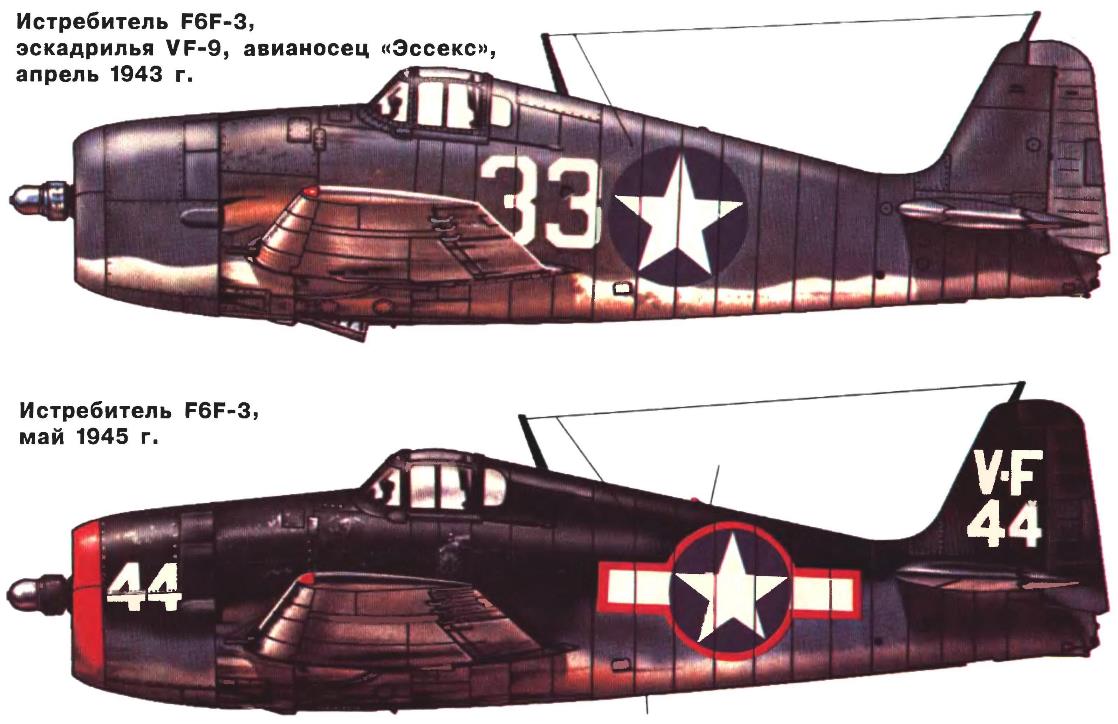 Control system — with classic handle and pedals. On the handle was located the trigger of the machine guns, dropping bombs and launching missiles. The plane was equipped with autopilot GR-1.
The power plant consisted of 18-cylinder air-cooled engine Pratt and Whitney R-2800-10W starting capacity of 2028 HP engine Axle was rejected down from the axis of the aircraft three degrees. Motor mount was attached to the armored power frames. Before the frame was located PROTEK-based oil tank. The engine has closed dural quick release hood. At the top of the hood was a sash to adjust the cooling of the engine.
The fuel system includes two main fuel tank for 331 l in the center section and the reserve tank capacity 284 l under the cockpit. In addition, under the fuselage could be suspended a fuel tank capacity of 568 L. also on wing pylons could fix two tank for 379 L.
The oil system consisted of a tank with a capacity of 79.5 liters, pump, two return pumps, oil cooler and electric control system oil temperature.
Radio TR1196 or SCR522A working in the ranges of short and ultrashort waves, installed in the radio compartment behind the cockpit.
Takeoff and landing gear is a tricycle landing gear with a tail wheel and landing GAK. Cleaning and release of the main landing was carried out by hydraulic cylinders. Alarm system of the landing gear is pneumatic. Depreciation racks oil.
Brake main wheel — hydraulic. Cleaning and release of the brake hook — hydraulically.
The primary armament of the aircraft to six wing-mounted 12.7-mm machine guns with ammunition 200 rounds each. When installed in the wing, two 20mm cannons, the ammunition was 250 rounds per gun. To report attacks on the left wing was mounted shot-method. Under each wing console, if necessary, installed launcher guides for NUR caliber 127 mm or 298 mm. in addition, the plane could take up to three bombs of 454 kg each.
N. Food reserve was, A. CHECHIN, Kharkov