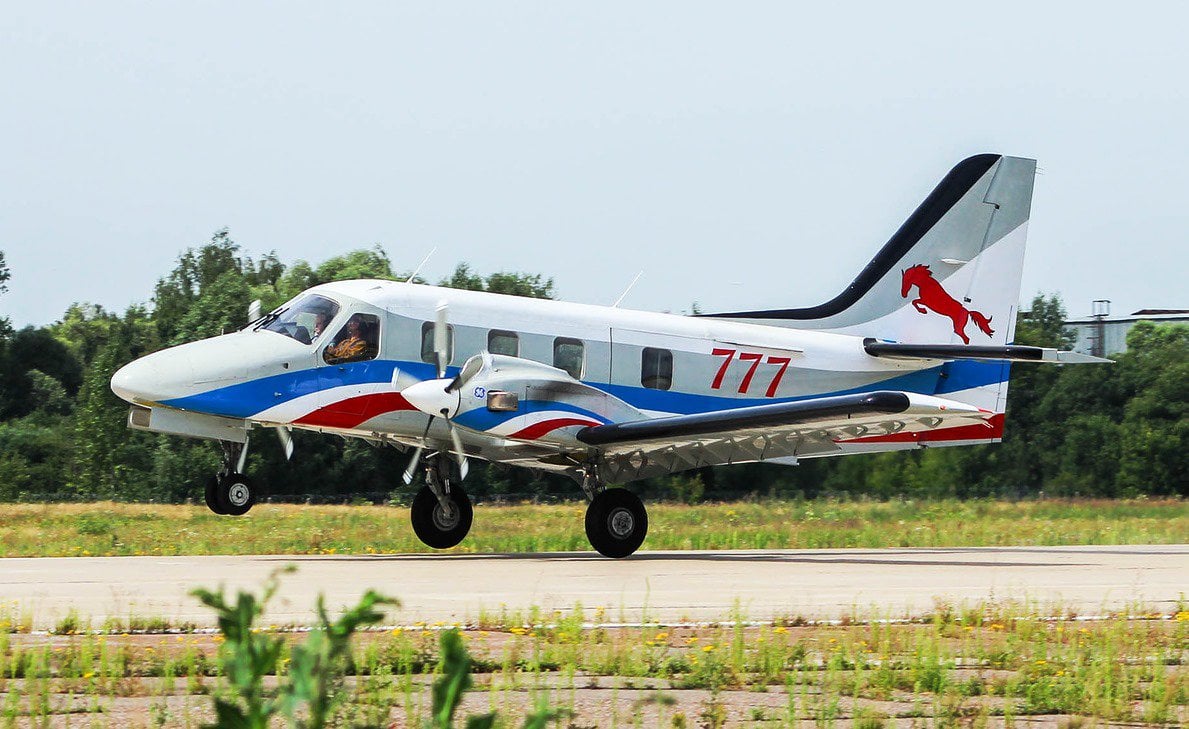 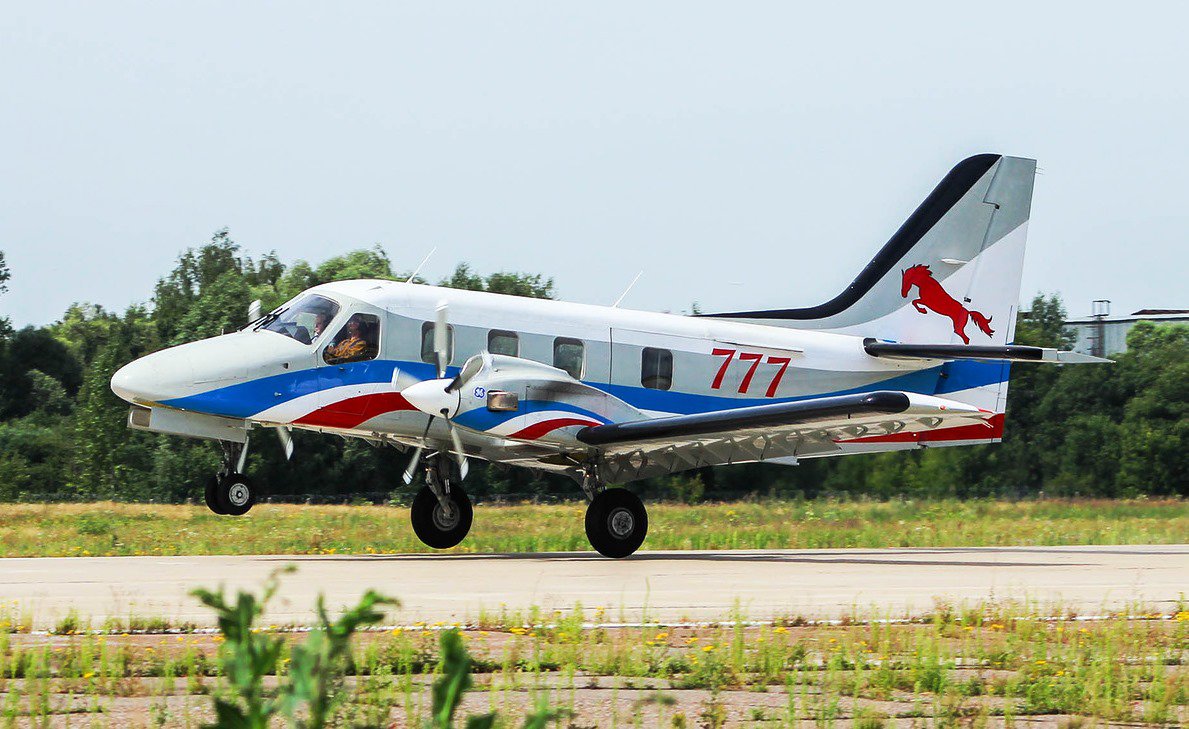 The plane “Rysachok” (including the “extra long” variants) – has a simple and technological design of cheap aluminum alloy. The manufacture and Assembly of all modifications are performed in the same process a snap, with up to 90% shared parts and the same percentage of the total components of finished products, including engines and avionics. The cabin unpressurized, with a sliding back passenger door of large dimensions.

“Rysachok” designed as a cantilever monoplane with low wing, equipped with retractable tricycle landing gear with tires of large size.
The plane was developed based on the requirements of operators in different countries of the world, which will significantly increase production and expand the geography of deliveries of aircraft.
“Rysachok” is equipped with two turboprop engines type Н80 rated at 800 HP General Electric company (USA).
Basing on unpaved airfields “Rysachok” is equipped with a wheel, and in winter ski gear.
Aircraft “Rysachok” in various embodiments will have a takeoff weight of from 6000 to 7200 kg, a cruising speed of from 250 to 400 km/h, altitude up to 3000 meters. The length of the standard route when performing regional transportation will be up to 400 km to 1200 km with one or two landings (without refueling). 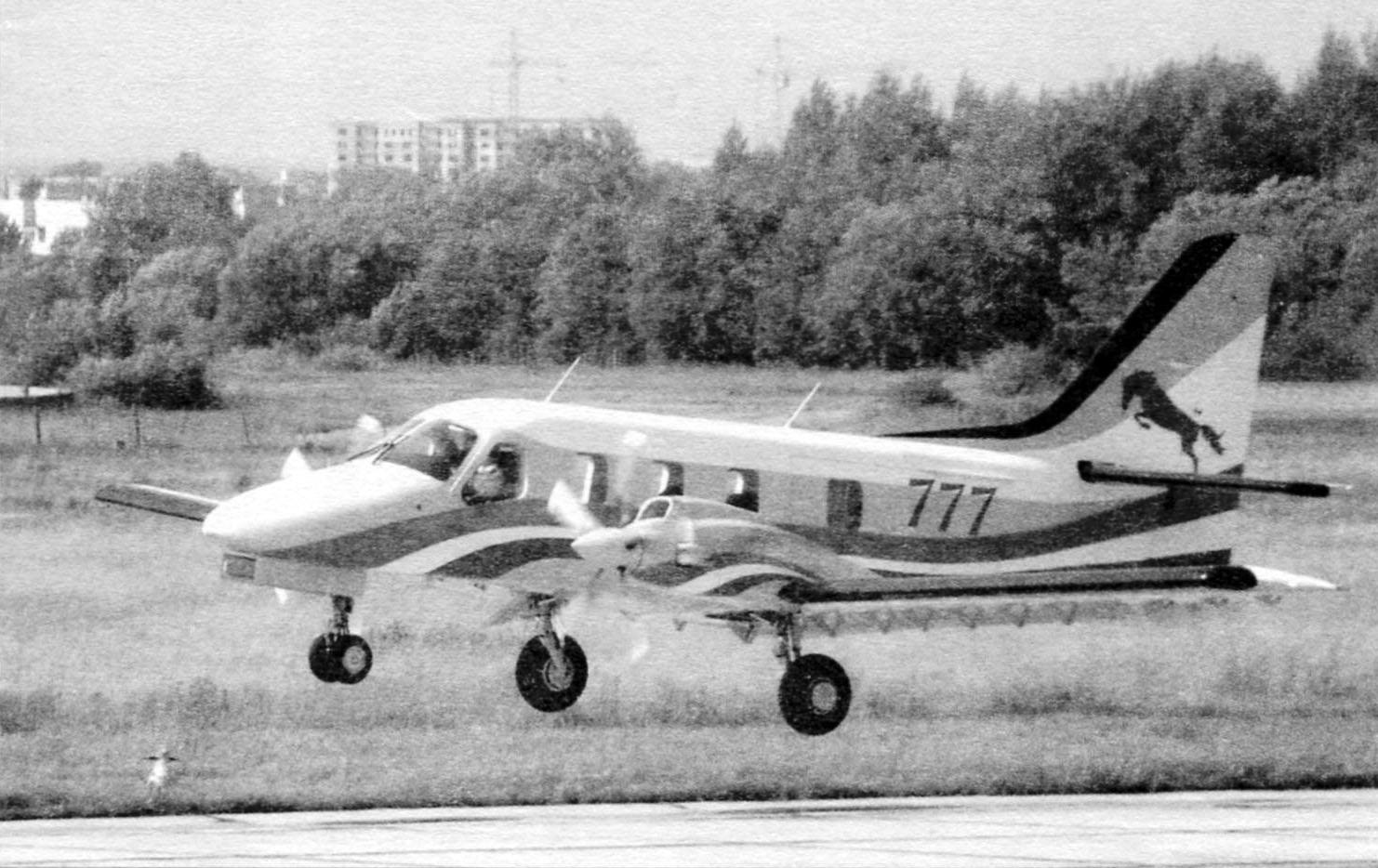 Light multipurpose twin-engine turboprop aircraft “Rysachok” during flight tests
“Rysachok” 10 places intended for overhead lines with low passenger traffic and is adapted for very short and high altitude airfields and for operation at high ambient temperature. For use in patrol, an educational-training, armed and other special options are preferable to 10-seater aircraft.
For overhead lines with a big boot and a long enough runway, the most economical would be to use 19-seat aircraft. For conventional airfields, which constitute the majority in Russia, the best would be 16-local option. The planes of this dimension, apparently, will make up a large part of the Park light twin-engined multipurpose aircraft.
“Rysachok” will help to revive Russia’s regional air transport system that existed in the Soviet Union, when the An-2 aircraft from any of the regional center perform daily dozens of flights connecting with him all the district and many rural elementary prepared airfields with runways. On the same plane with minimal alteration of the salon in one day can be passenger, cargo, ambulance, patrol flights. 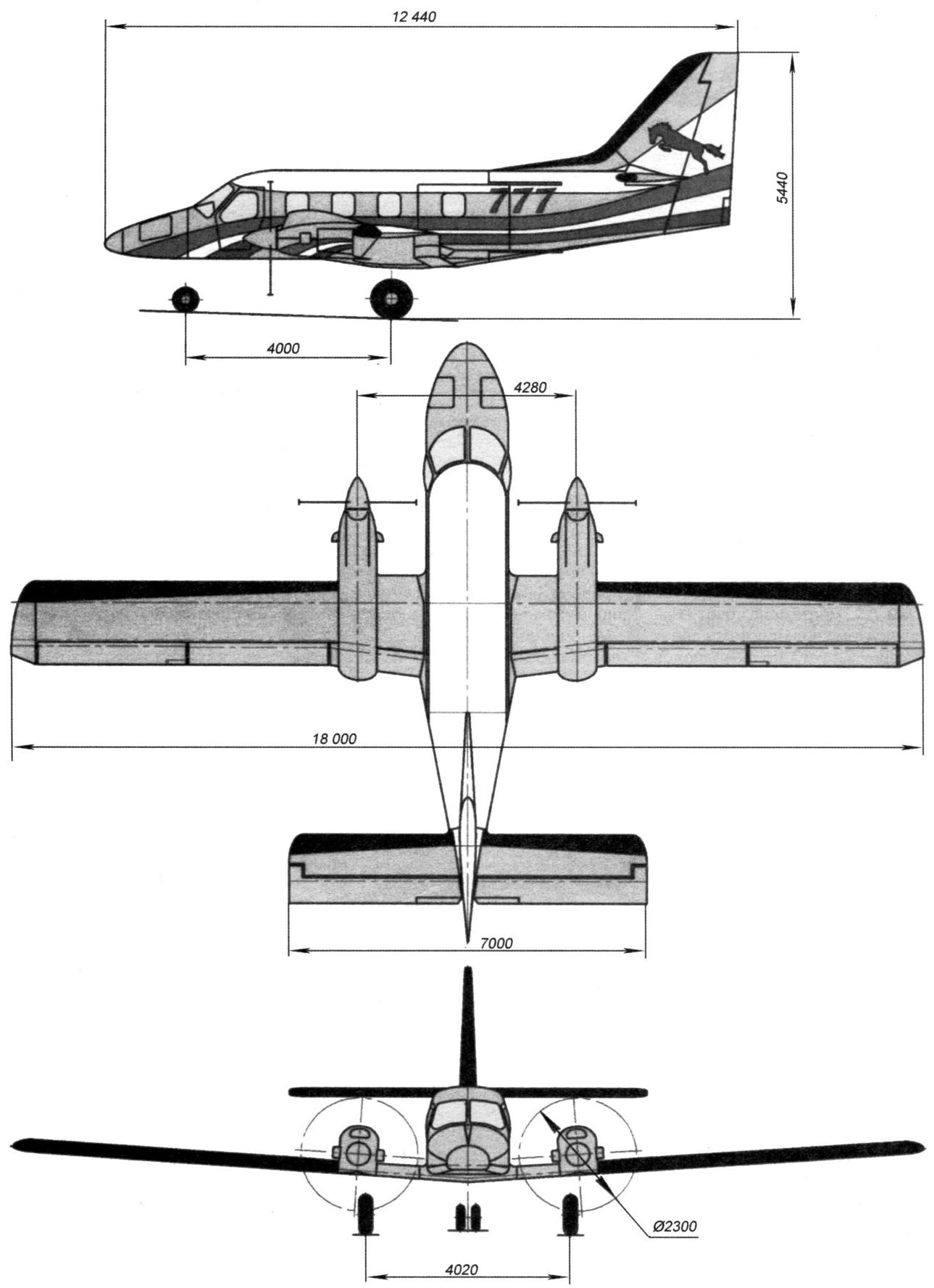 The plane “Rysachok”: General view and overall dimensions
The plane “Rysachok” can replace the An-2 not only in the regional air transport system, but in flight schools. However, as modern aircraft, it has much better flight characteristics: high rate of climb and cruise speed, longer range and flight duration with the same commercial load.
Operational and technical requirements for a light multi-purpose aircraft determined the following features of the aerodynamic layout and design of the aircraft:
Highly energy efficient -higher than aircraft of a similar class that allows you to operate it with a very short unpaved runways, take off and land on the high ground. In addition, this provides a good maneuverability required for regional aircraft.
High elongation of the wing ensures high aerodynamic quality of the aircraft and maximizes payload capacity, range and duration of flight.
The large wingspan ensures minimal heeling and turning points when the failure of one engine in the air that the pilot can easily fend off with the help of rudders and ailerons in flight, on takeoff and landing, gives you the opportunity to continue or abort the takeoff. 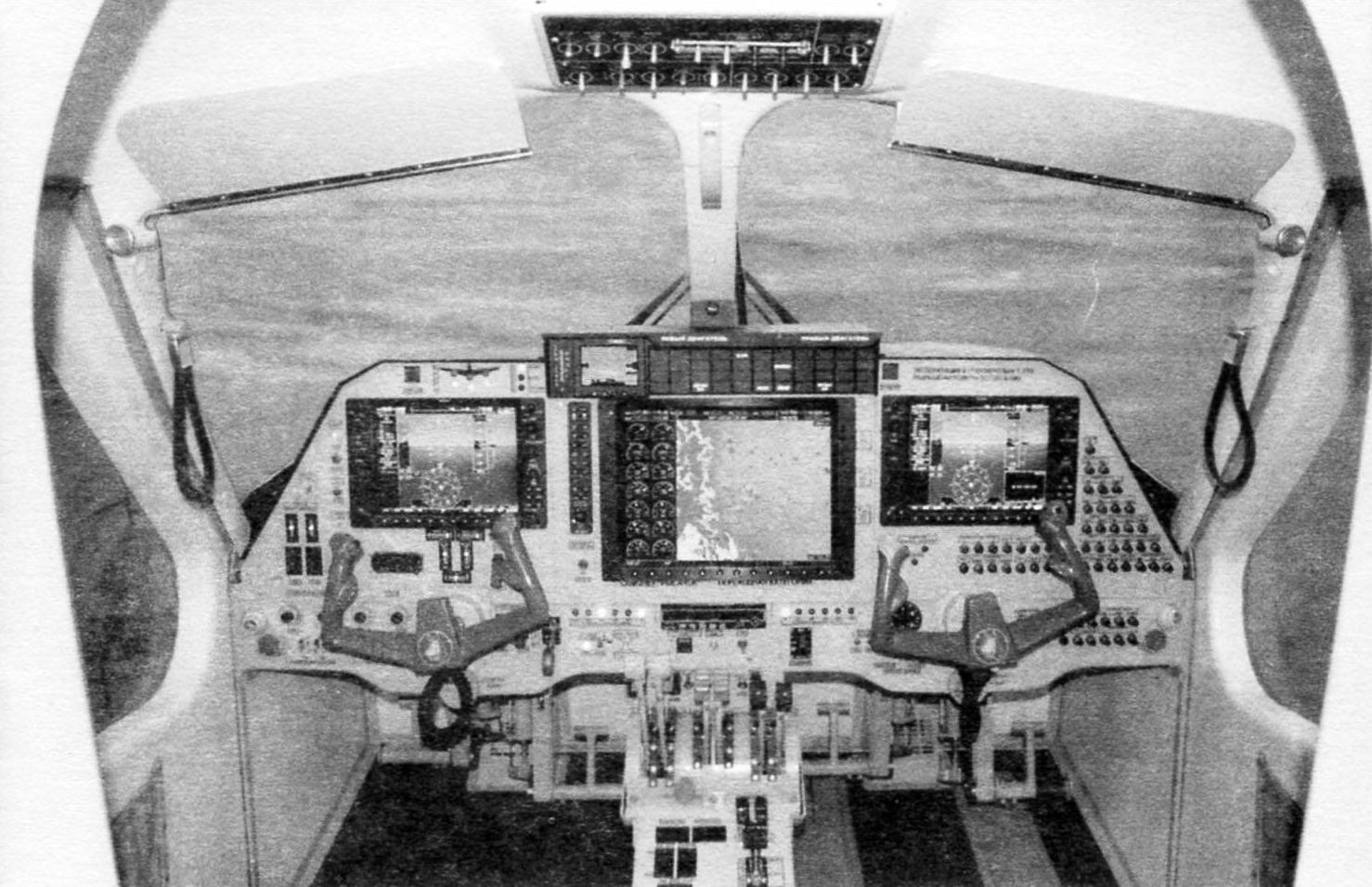 The cockpit: the instrument panel and controls 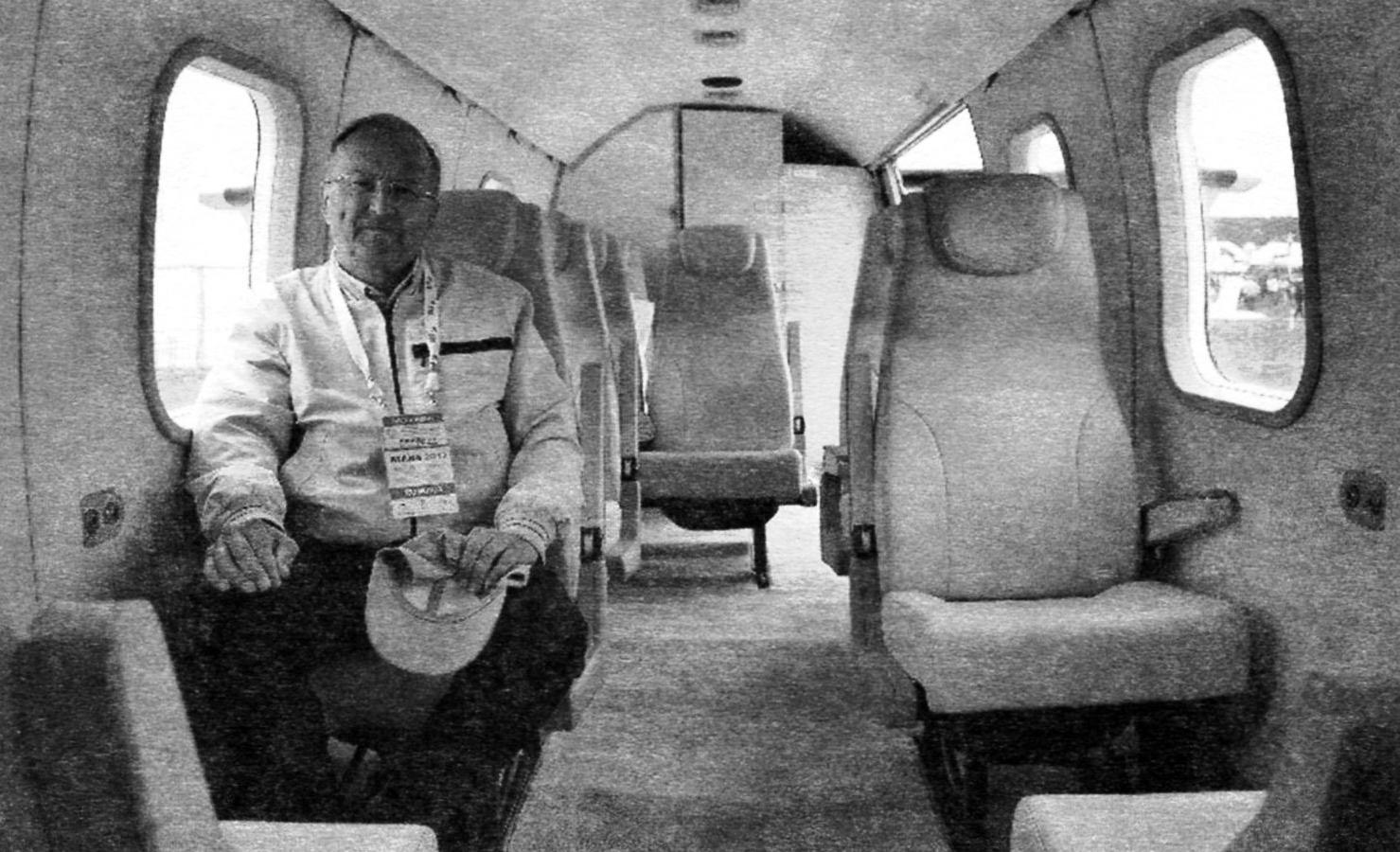 10-local option interior: a pair of front seats deployed “against flight”
Wing without narrowing safe determines the nature of stall of the aircraft. When the speed drops to the stall-nose down and again accelerates with no tendencies to stall on the wing and the transition into the spin.
The profile of the wing P-301М-15 provides an aircraft wing very high load-bearing properties, excellent characteristics when stall and spin, it does not require the installation of the slat.
Due to the large elongation of the wing, the maximum lift over drag ratio is realized for angles of attack corresponding to flight at speeds of about 1.3 V‘s. Therefore, the second modes of flight the aircraft was virtually absent, the highest rate of climb is realized at the minimum allowed speeds.
Horizontal tail the large area provides a range of operational balance from 15 to 50% of the mean aerodynamic chord that with the stock covers all options of the aircraft.
The vertical empennage of increased area and large developed down the rudder provide stability and controllability of aircraft at high angles of attack at the stall, and the recovery of the aircraft from a spin. 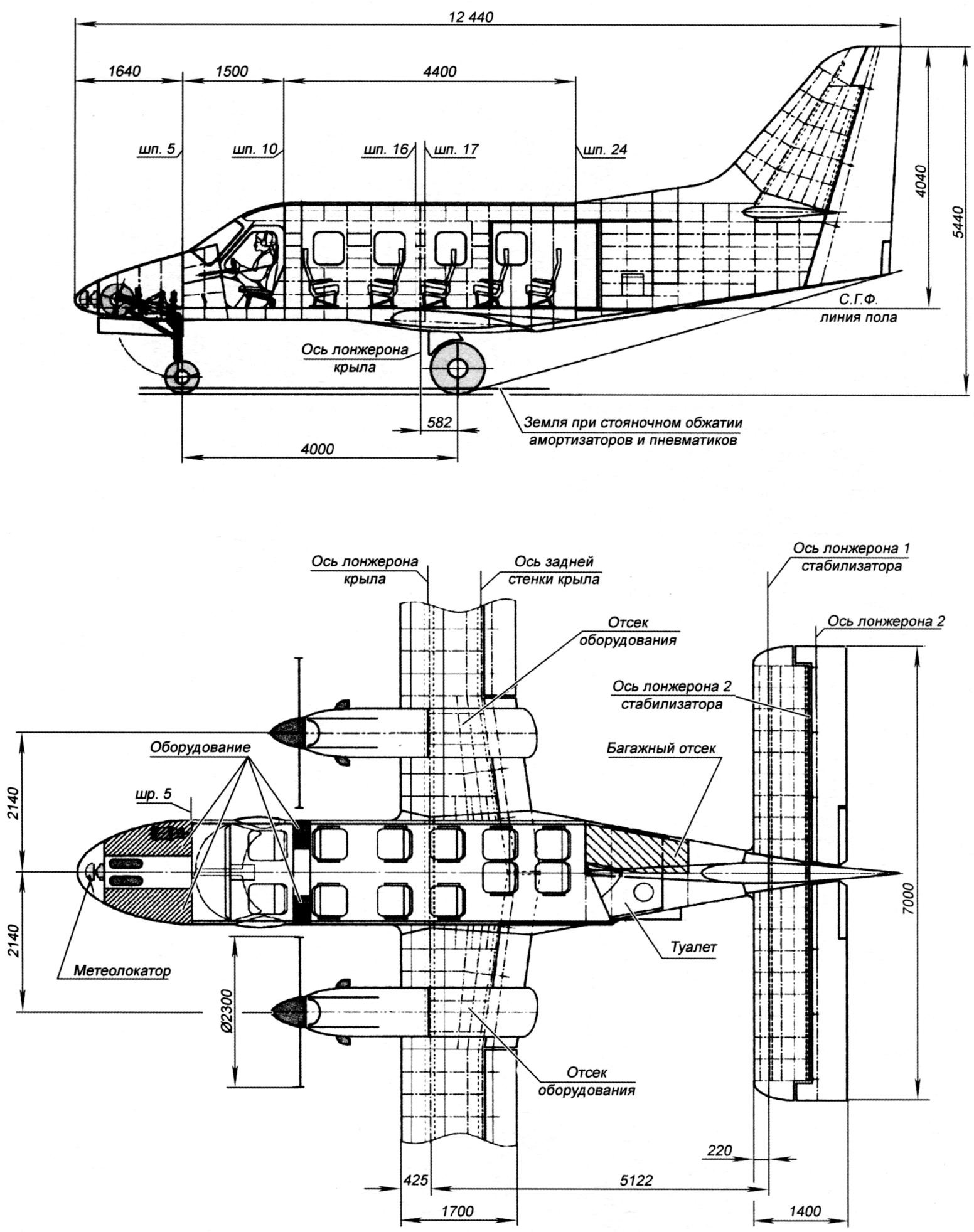 The lineup of aircraft “Rysachok”
The engine air intakes located above the engine nacelles, raised high above the surface of the aerodrome, have special dust device provides the operation of an aircraft on ground elementary prepared airfields.
Five-blade propellers of the type AV-725 provides reduced noise and vibration.
Retractable landing gear with low pressure tires of large size enables to operate the aircraft on unpaved airfields with low density ground and unprepared sites. In winter it is possible to replace the wheels on the skis.
The cabin is unpressurized, so to fly at an altitude of 6000 meters the machine is fitted with an oxygen system for all crew members and passengers, while passengers using devices such as “cannula”.
Anti-icing system consists of: pneumatic tread on the leading edges of wing and tail, electric heaters of the blades of the propellers, heated engine air intakes and defrost the windshield.
MAIN CHARACTERISTICS OF AIRCRAFT “RYSACHOK” 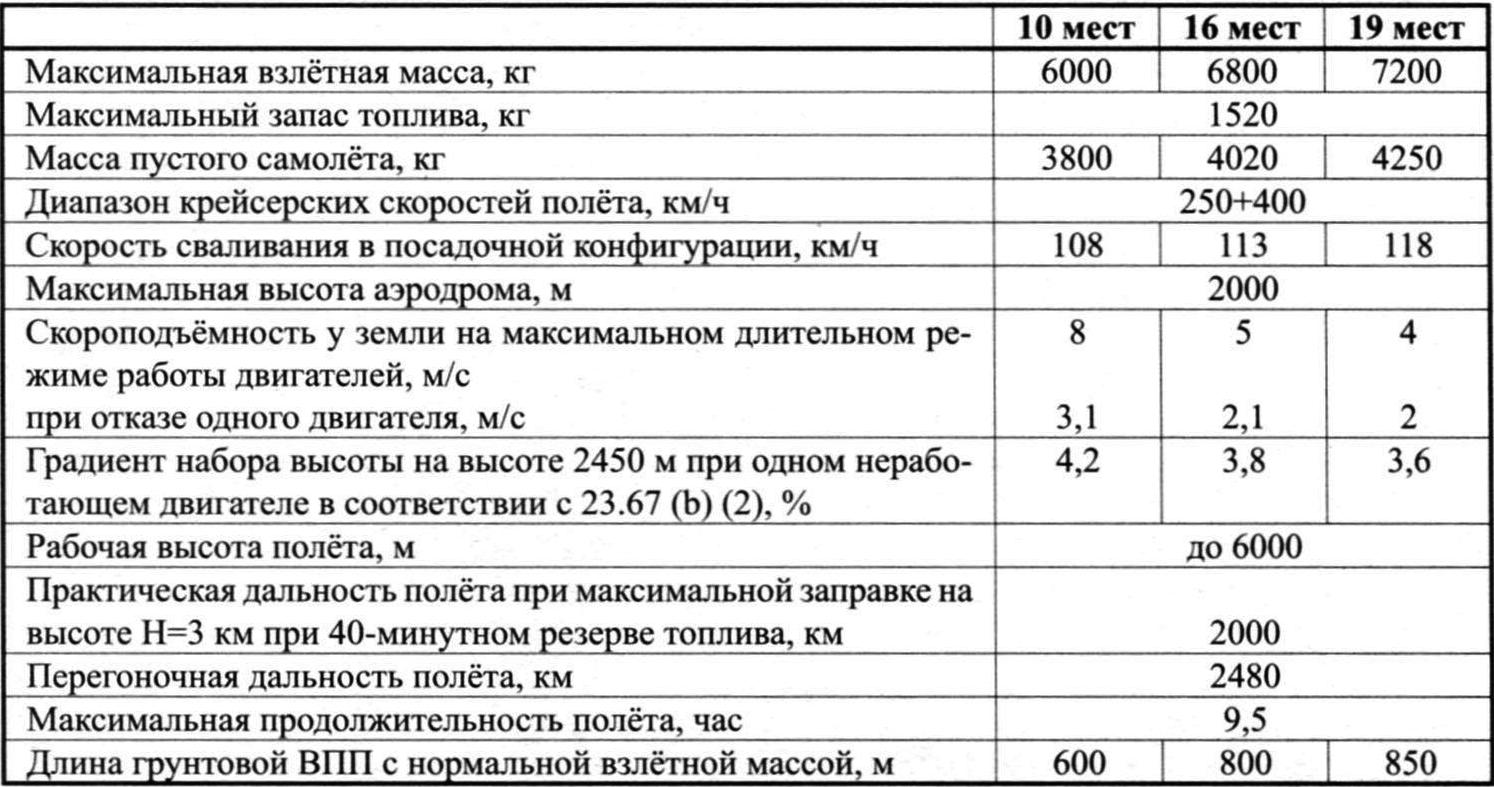 THE GEOMETRICAL PARAMETERS OF THE AIRCRAFT “RYSACHOK” 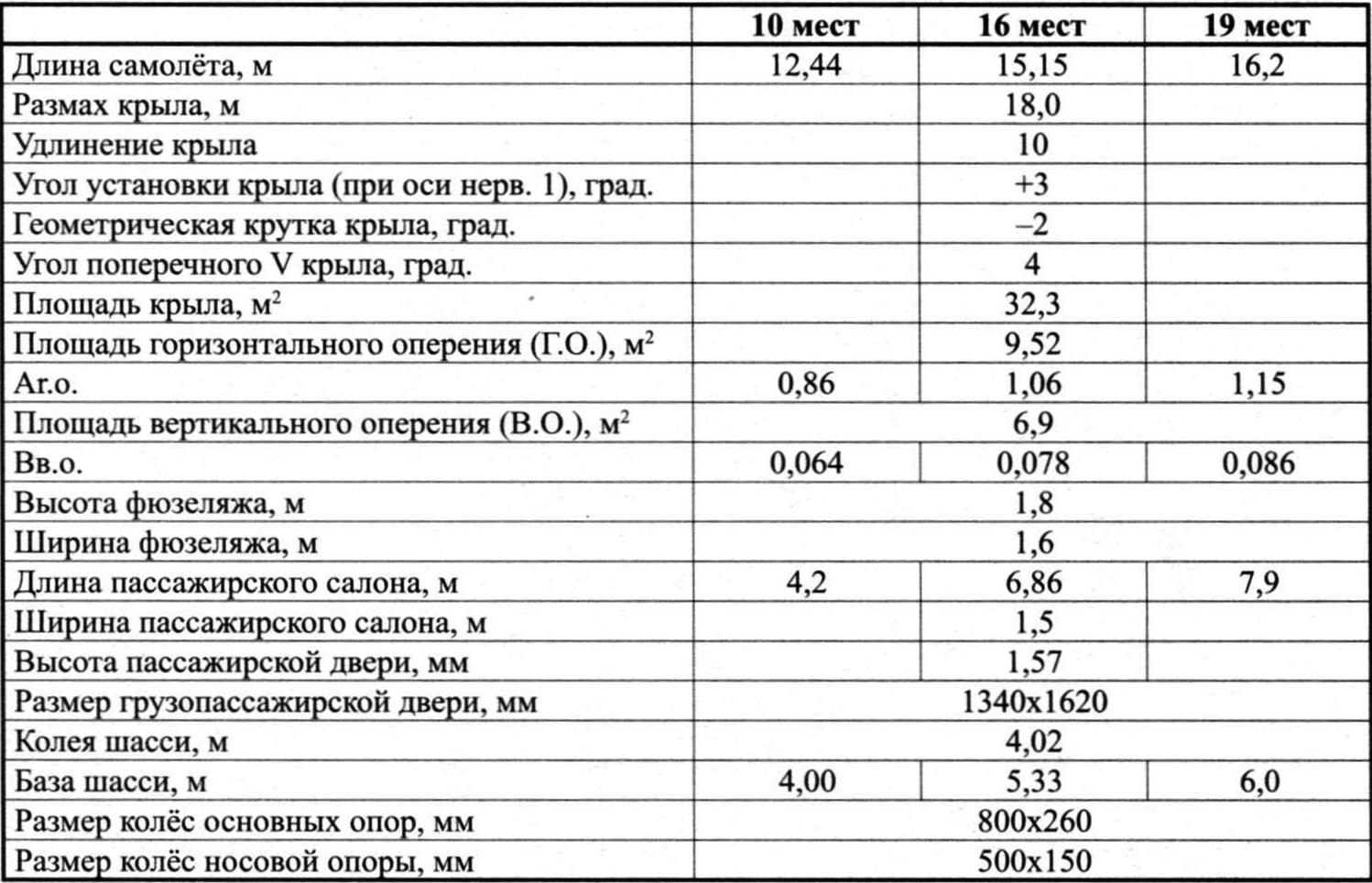 The aircraft has modern avionics, “glass cockpit,” the weather radar. All this allows to perform flights day and night in adverse weather conditions in all climatic zones of the world.
The plane is designed in accordance with the requirements AP-23 to the aircraft computer (transitional) categories, based on American and European standards. This ensures the aircraft, its systems, engines, equipment, components, ground support and repair, as well as ekspluatatsionnaya documentation standards ISO, GOST, industrial standards, OTT PERFORMANCE VS HA and other inter-Agency and sectoral normative documents in force in Russia. The level of noise generated by aircraft on the ground, meets the requirements of AP-36 and Annex 16 of ICAO.
Regular operation of aircraft with a maximum takeoff weight to be provided for airfields with unpaved runway in soil strength or rolled snow only 5-6 kg/cm2.
Light twin-engine turboprop aircraft “Rysachok” is designed to perform various aviation activities, including:
– transportation of passengers with Luggage;
– transportation of cargoes;
– aerial patrols of the state borders, forests, power lines, oil pipelines, highways;
– stretcher patients, accompanied by a paramedic in the ambulance version;
– anti-terrorist operation (with the installation of light weapons);
– Avialesookhrana, including patrol, forest fires, dropping fire;
– aerial photography;
– environmental control;
– the dropping of paratroopers;
– training and training of pilots;
– search and rescue operations.
The plane “Rysachok” can be produced is extremely uniform in three versions:
1.10-seater aircraft “Rysachok” (basic variant – low, two turboprop engines, short runway, 10 passenger seats or cargo up to 2000 kg, a high cruise speed and long range flight.
2. 16-seater version of the aircraft “Rysachok” – from the base case differs only in a longer fuselage. The aircraft is certified for the carriage of passengers and cargo.
3. A 19-seater version of the aircraft “Rysachok” – from basic and 16-seater variants has even a longer fuselage. This is the most economical model of “Rysachok”. And this plane can operate from unpaved airfields. 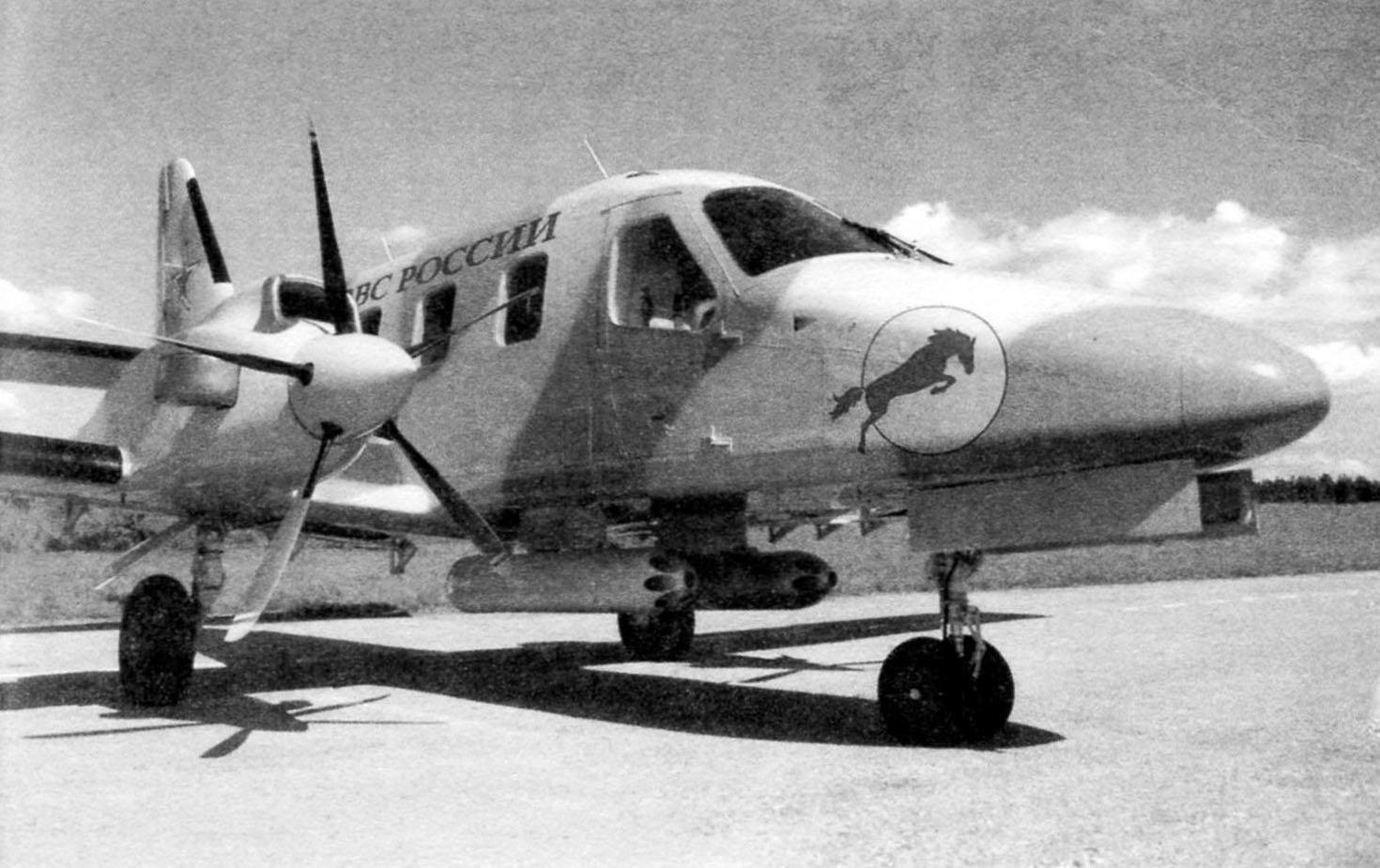 Option patrol and reconnaissance aircraft for the Russian air force 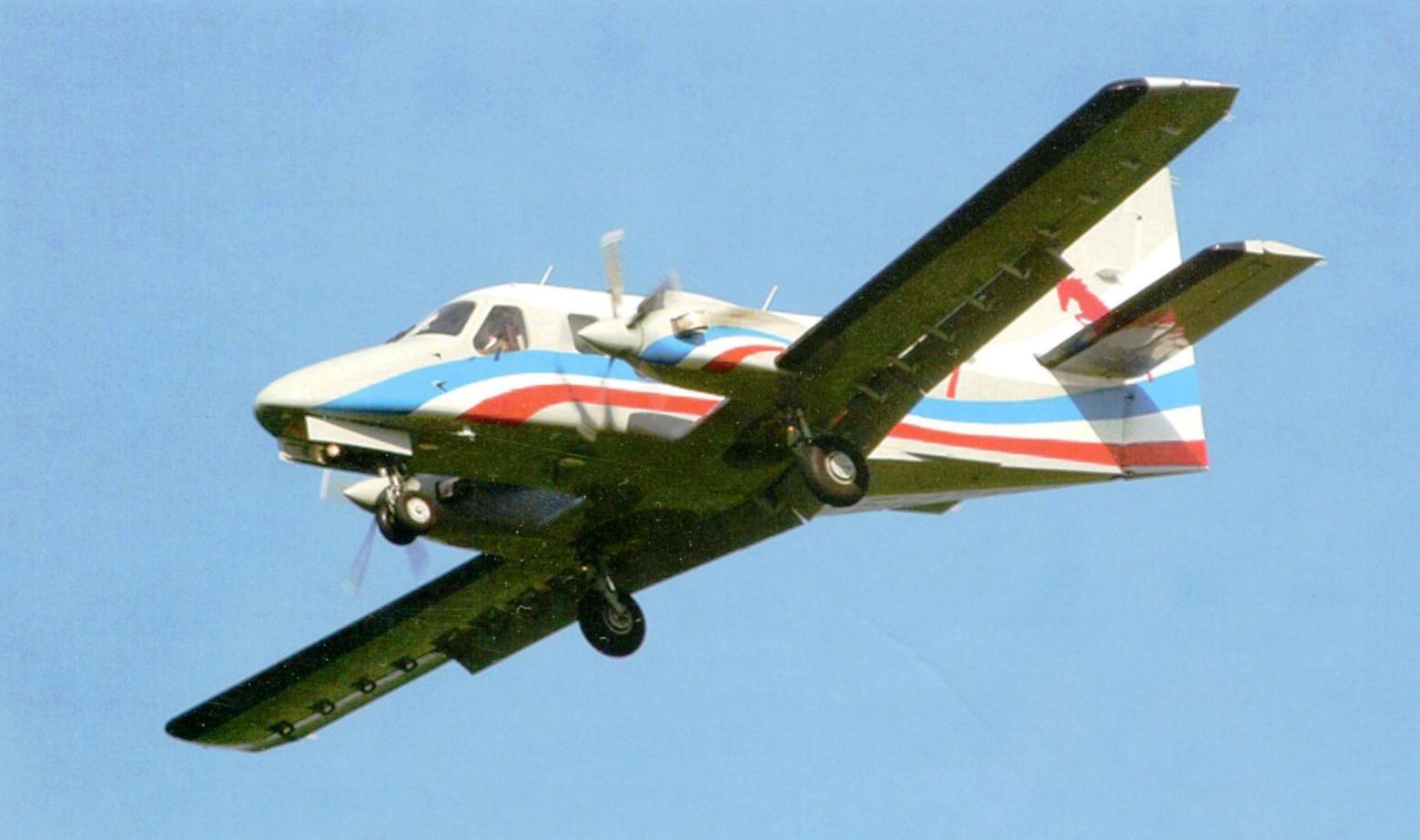 The first prototype of the multipurpose light aircraft “Rysachok”, developed by the Russian firm “Technoavia” in-flight at MAKS-2011. The city of Zhukovsky, Moscow region 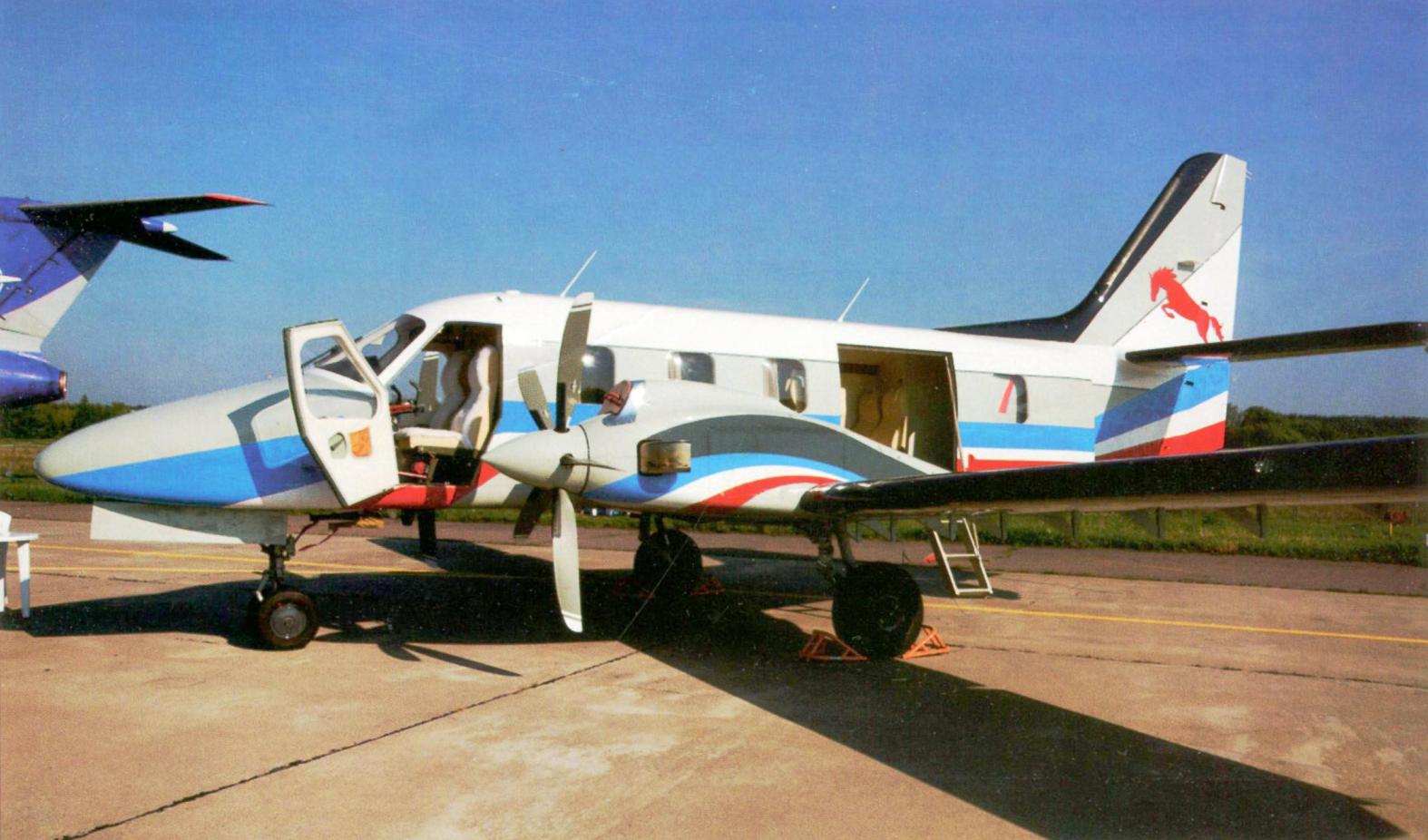 “Rysachok” wide open: open the door of the commander of the aircraft (the right door for the second pilot also available), wide the cabin door behind the wing (or cargo compartment, depending on the destination) shifted ago
The plane “Rysachok” provides:
– the opportunity to continue the takeoff and flight failure of one engine;
– high security, including during a forced landing outside an aerodrome or on water.
RESOURCE AND SERVICE LIFE OF THE AIRFRAME, ENGINES, PROPELLERS
The plane “Rysachok” is the assigned resource is: 15 000 flight hours, 30,000 landings, the service life is 25 years. The initial assigned life of 4,000 flight hours, 8000 landings. Resource components (excluding engines and propellers) for the airframe.
TBO engines GE Н80 and propellers AV-725 – 3500 flight hours, the service life between repairs and the number of overhauls of the engines is not limited.
Operation of the airframe and avionics are carried out according to the technical condition, planned repairs is not provided.
Vladimir KONDRATYEV