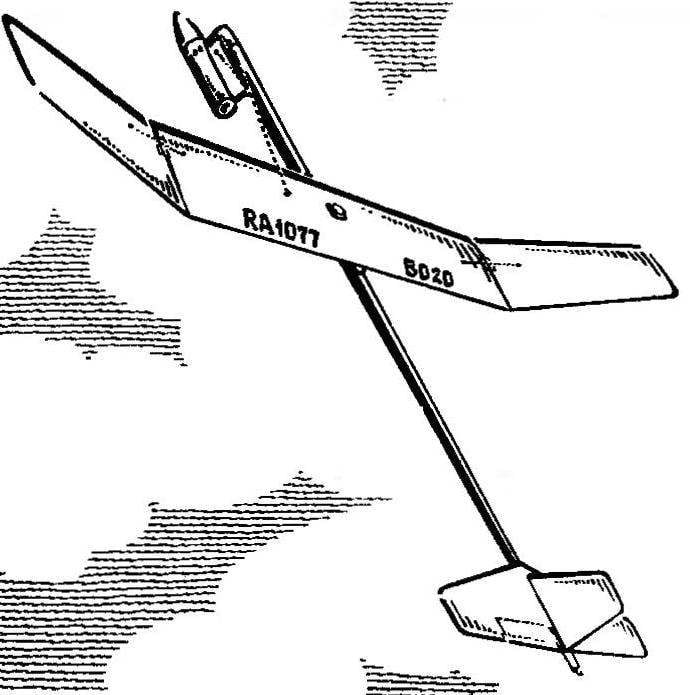 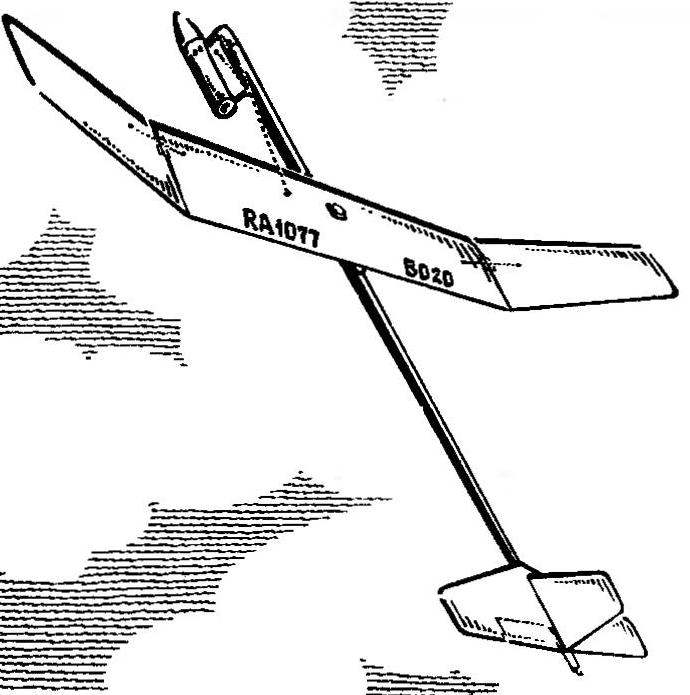 For the past three years an enviable stability in the class 84В shows Moscow racemode-sheet O. the ravens. It was not the case, so he did not became the winner. So the next championship of Russia, held in Orel, Oleg took the second place. To a large extent the key to this is the reliability of sports “projectile” rocket plane. N addition to the model, there is absolutely oryginalny automatic forced landing. I hope that this design will interest our readers.The proposed model is a bright representative of the so-called “Moscow” scheme raketoplana. Fuzuli — tapered beam of plastic. Its manufacturing technology Tenova. On the mandrel of variable cross section with a diameter of from 4 to 8 mm is wound first single steklotarny layer with a thickness of 0.06 mm, then the first layer of carbon fabric with a thickness of 0.12 — 0.14 mm and the second, just a length of 160 mm. then applied another two layers of glass, all carefully vyshkurivaetsya. The weight of finished beam is obtained in the range of 1.5 g.
In the forward (wide) beam end glued the fairing of lime. At a distance of 120 mm from the front NRA beams mounted vtmenu attachment point of the wing, machined aluminum edges, and glue to put the base plate of balsa with a length of 62 mm and a width of 7.5 mm. the mount consists of four parts: bushings, bolts, washers, and nuts. VSV them, except for the washer (it’s silicone), machined from duralumin with a high surface finish.
The pylon — shaped bapinova plate 4 mm thick, size 46×10 mm — is glued to the forward fuselage. The pylon is made of a 4 mm hole for the rod determinator. From below to it is attached the container MRD, made of two layers of glass on the mandrel with a diameter of 10.5 mm. In the front of the pasted fake fairing, which drilled eight holes for gas exhaust when triggered, expelling charge mrad.
Wing with dual angle “V” consists of a center section and two “ears” (consoles); it is made of balsa plate with a thickness of 3.5 mm. the Profile is PLANO-convex. The center section in the form of a rectangle 270×62 mm, the trapezoidal shape, their length 130 mm, width from 62 to 50 mm, the minimum thickness is 2 mm. noncola Hinged to the center section made of nylon fabric with a width of 20 mm, pasted below. 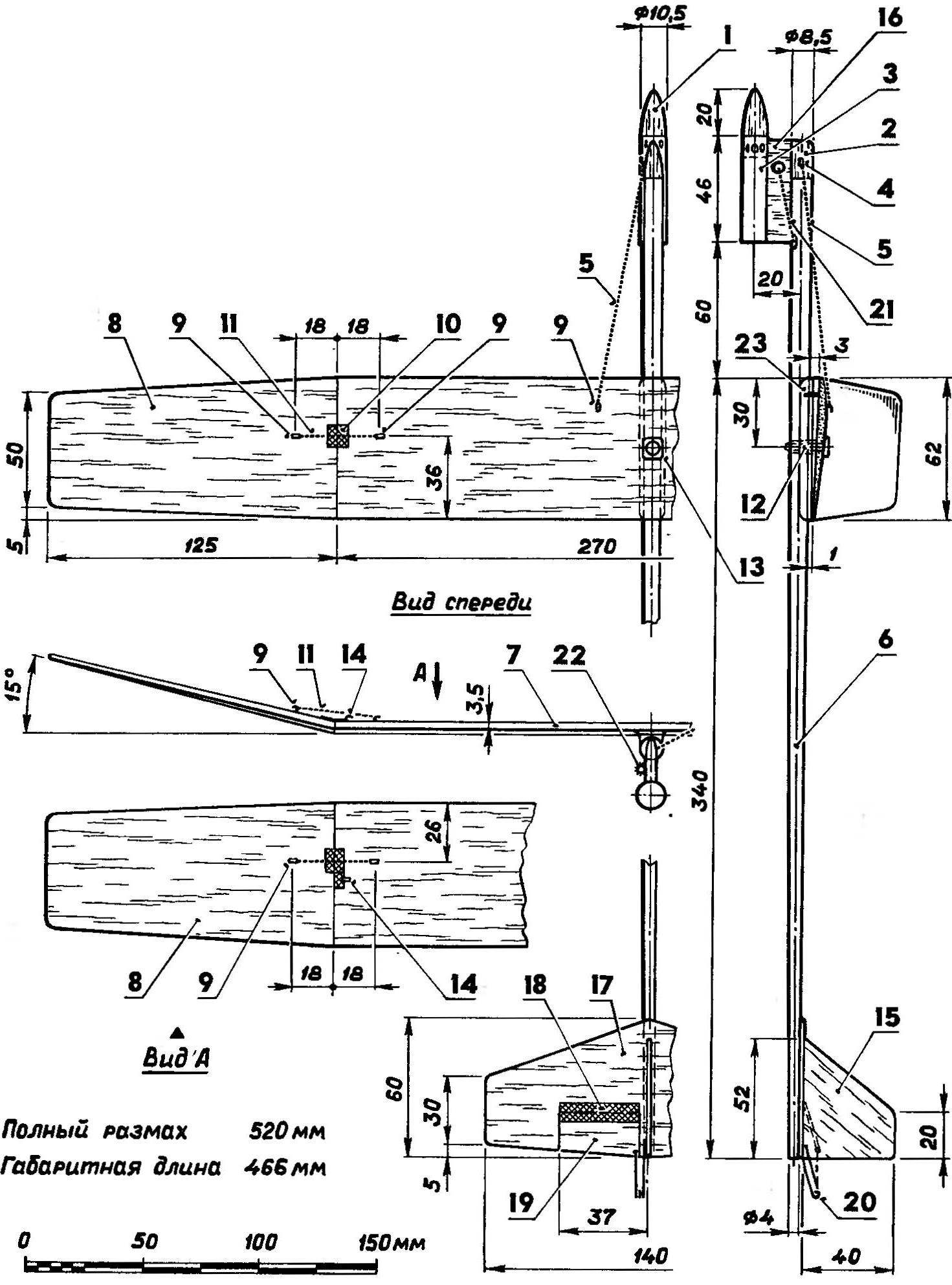 Rocket glider O. Voronova:
1 — cone container, 2 — fairing of the fuselage 3 — the container mrad, 4 — hook fastening elastic return of the wing 5 — the elastic return of the wing, 6 — fuselage, 7 — center section, 8 console (“ear”), 9 — hook attachment bands, 10 — reinforcement plate 11 and the elastic return of the console, a 12 — node wing mounting, 13 — strengthening of the fixing unit, 14 is a hook attachment wing in the folded position (for takeoff), 15 Kil, 16 — pylon 17 — stabilizer, 18 — hanging of the landing flap determinator, 19 — landing flap, 20 — torsion of the landing flap, 21 — pull determinator, 22 — wick, 23 — emphasis of the wing in the expanded form (planning).
In the active phase (on the rise) “ears” are folded down, and the center section is rotated 90 degrees and placed along the fuselage. When planning the console back to its original position by elastic bands, fortified between the hooks on the center section and “ears”. Where you touch the gums strengthened by overlays of fiberglass with a width of 5 mm. the Angle “V” is created by processing the end surfaces of the center section and consoles. ,
In the middle of the center section bottom is glued the pylon balsa plate with a width of 8 mm. the Difference in the thickness at the leading and trailing edges (2 mm) creates the necessary installation angle of the wing. For fixing it to the fuselage in the middle of the center section is made a hole (for a screw diameter of 2 mm), reinforced with top and bottom pads made of carbon fiber. To install the wing insert the bushing into the fuselage, the combination of holes and threaded bolt. Bottom put on a washer and tighten the nut. To launch the model rocket glider wing (with folded “ears”) is rotated 90 degrees counterclockwise and in this position the locking thread passing through a hook on the right side of the center section and holes in the nose of the container mrad. In flight, when triggered, expelling charge thread burn through, the elastic return of the wing expands in a planning position, almost simultaneously deflected up and console. Further rotation of the wing (when viewed from above) keeps the focus of the double wire 0.5 mm in diameter and glued to the center section at a distance of 8 mm from the leading edge.
Tailplane (stabilizer and fin) are made of balsa plate with a thickness of 1,5 mm. glue the Stabilizer to the beam on the resin N-153, the keel is epoxy resin. After cutting out the shape in terms of their surface is treated with sandpaper and varnish. The stabilizer on the left side in the back make the scrape under braking (landing) flap, which is made separately. Pivotally attach it to the stabilizer on the sticky tape “ORACAL”. Deviation up to 25 — 30 degrees is accomplished by torsion bar mounted at one end in Kiel, and the other in the rear edge of the flap. Here tie one end of the rod determinator (thin steel wire of diameter 0.3 mm). Pass it inside the fuselage, bringing the other end of the pylon. To it solder the hook-to install thread with a wick. The wick is placed on the right side of the pylon, paste over it with a thin glass fiber for thermal protection.
Before starting in the hole on the pylon threaded thrust of determinator, side tie and thread the wick and light it. In flight (after correct time) the wick burns through the string, the pull is released and the torsion bar deflects up landing flap, and the model switches to the parachuting mode with plasma rotation. The center of gravity of the model without an engine located at a distance of 30 mm from the leading edge of the wing. The mass of the rocket is 22 g. it Starts from a launcher of the type “Piston”.