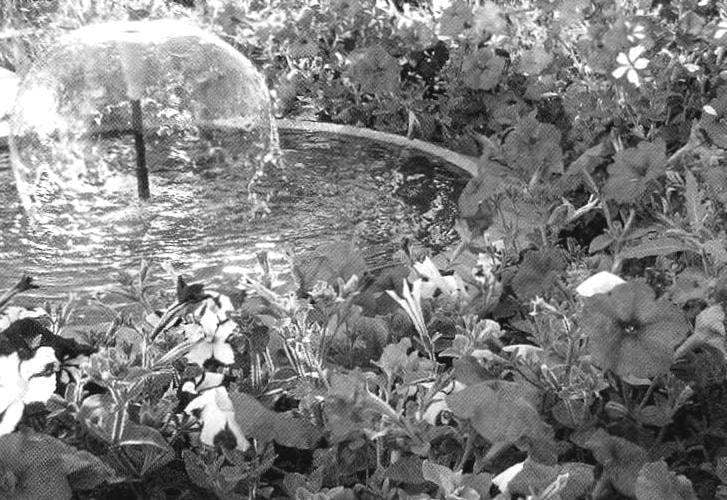 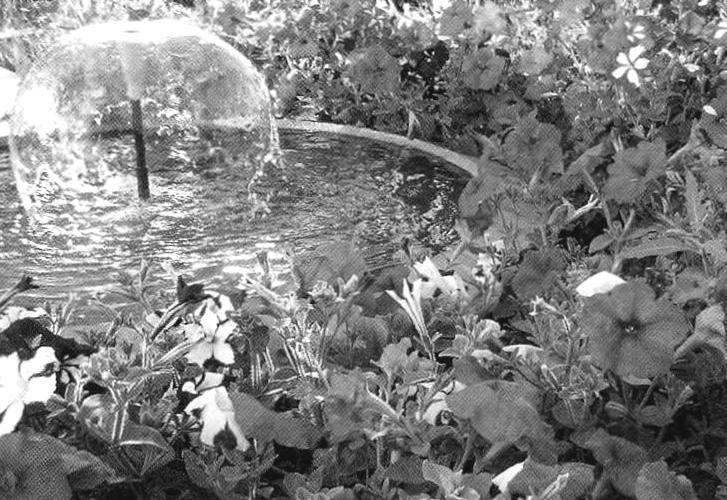 On March 8, at the holiday table with the whole family dreaming about summer red: it would be good for the plot, in the garden-the garden to break a flower bed, but the other is to build a fountain. The wife suggested a place for the beds in the foreseeable space in the middle of the infield, is at the fork of three roads, or rather on the site where three garden paths, next to the Apple tree-Ranetki. Son suggested this place to build the fountain, and beds to choose another appropriate place.
Undoubtedly, the flowerbed is a decoration of any country, garden or vegetable plot. But I will not yield to her in this fountain. Thus, the final word remained with me, and I really did not want to upset his wife or son. And then came the idea to do a combined construction of the fountain with a flower bed (or a bed with a fountain) — which I immediately shared with the household and for clarity even made a sketch. The idea was supported by both parties, and I had to select and prepare the materials for the construction of small architectural forms (as professional builders and architects call such structures).
An equally important issue in the preparation of the construction was the selection of the pump. But when he came to the store and consulted with managers, it turned out that for me this question has long been decided by professional designers — sales were finished fountain pumps, with different capacity and with numerous attachments, creating a variety of “torches”. Among several selected pump brand FP-28 Gardener company in China, probably because of cheap price.
Its power consumption is only 28 watts, but the performance is enviable — 900 liters per hour. And the height of the pressure up to 1,6 m. the Case is made of hard plastic with a supporting suction cups on the bottom. Weight — 1.5 kg. the Pump is provided with a long reliable cable to plug into the domestic mains voltage of 220 V.
The fountain pool was supposed to build a concrete monolith. But one day, going to the buddy driver”trucker” on a visit, saw his old workshop, standing idle, a large tire from a wheel of the truck KrAZ. And then the thought came to me — to accommodate her under the pool. Of course, from tractors K-700 tires even more, but this was quite appropriate. Buddy is not only not greedy, but, as it turned out, was even glad to be rid of such a “rarity”. 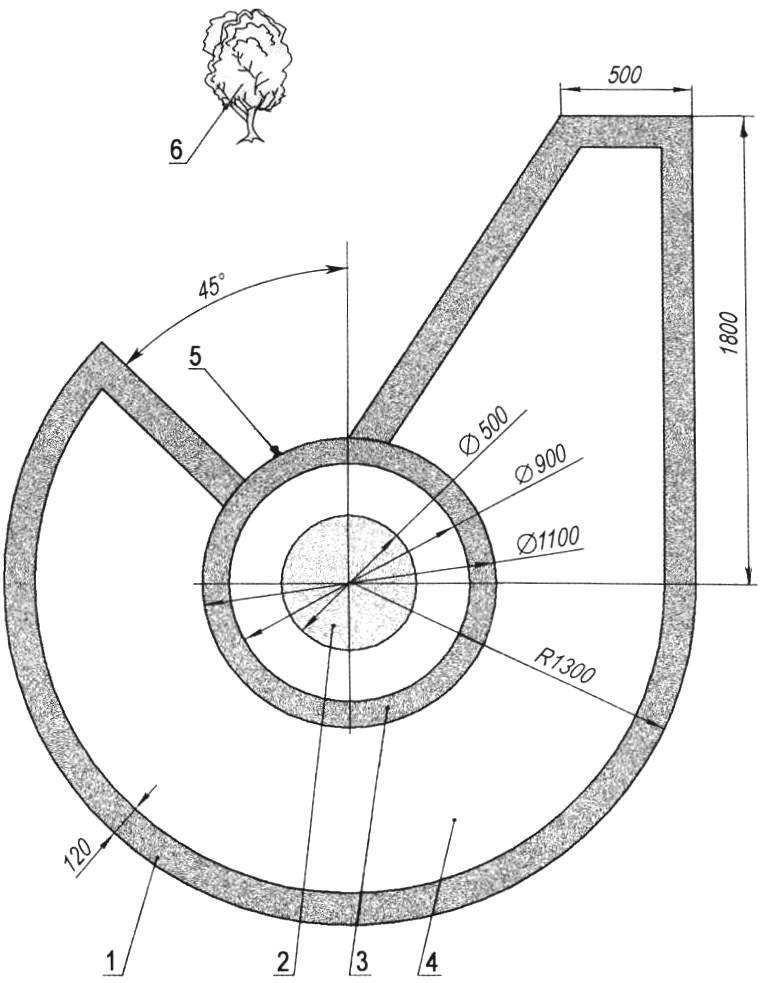 A flower bed with a fountain pool:
1—the base of the structure (ground); 2—pillow pool (river sand); 3—the Foundation of the pump (in situ concrete); 4—pool fencing; 5—Foundation masonry fence beds (peschanoozersky mortar with reinforcing mesh); 6 — bed protection; 7 — upper screed (sand and cement mortar with reinforcing mesh); 8—floor pump (tile); 9 — outlet; 10—the fountain pump FP-28; 11 water; 12—nut G1/2” with extended spacer (2 sets.); 13—cap (cap nut G1/2”); 14—spacer (soft rubber s3)
For fencing flower beds chose stoneware, so-called one and a half brick (height 90 mm, not 65, as in ordinary single), only to put it involves not “Christmas tree” (edge angle), and the usual “chain” laying (overlapping seams) with thickness of a half-brick.
Warm April day with his son set to work: made the markup and shovel removed the topsoil in a circle the outside diameter of the tire in the place where was located the fountain pool. Is removed vegetable layer filled the bed of river sand and watering it with water, compacted by hand tamper.
Before you lay the tire in place, she carefully cut the razor-sharp knife-joint in a circle one Board to the protector. Even in the tire at the edge of the treadmill cut out a small hole under the drain-pipe. The fitting produced from the cut half-inch pipe with the appropriate thread on both ends. In the lid secured one of its ends by a pair of nuts and bolts with extended washers, screwed from different sides of the shell and the other end drowned out acorn nut with a strip of soft rubber of a thickness of 3 mm. 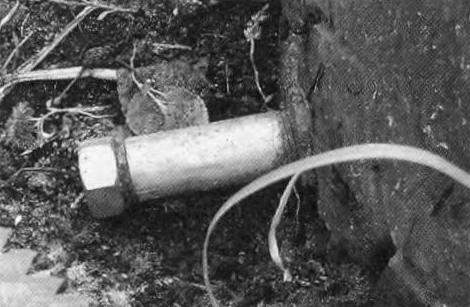 Outlet water from the swimming pool
Then, after putting the tire in place, make sure that the fitting is a little bit above ground level (adjacent platforms around). It will need in the operation of the fountain to drain the water from the pool by gravity. Then poured a concrete mixture volume in the middle of the tyre (the Foundation of pump) to the edge of the left side, and the center put a smooth tile. After a couple of days, when the concrete is frozen, its surface (except tiles) “salesny” — jammed the pure cement paste.
But it was too late. And after pouring concrete rammer walked around the perimeter of the flower beds. In this configuration, the fence was chosen such, that the bed was not narrowed converged here garden paths, and even to have an inclusive approach to pool and drain the pipe-fitting. The entire band the base of the future of masonry (and the reason the builders are called the supporting soil under the Foundation structures) paved with a layer of strong mortar with reinforcing mesh. After the lunch break began building the brick wall thickness of half-brick and a height of two bricks with ligation and mortar “raked joint”.
After laying the eggs around the perimeter, on the top of it put another layer of strong mortar with reinforcing mesh as the base. Only the cement for the final layer used white, sand and light. 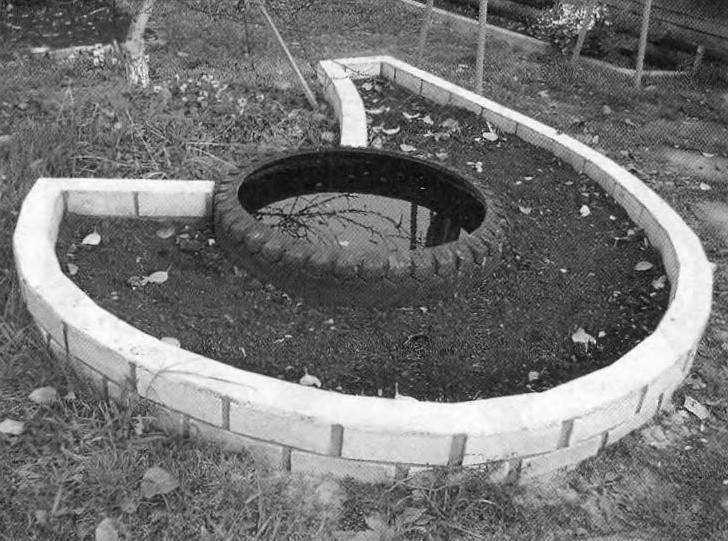 The construction of the garden beds with a fountain is complete! Left to plant some flowers and wait for summer
Filling flowerbeds with vegetable soil, produced only a few days, when the white grout is top of the screed finally solidified. And in the end still covered the surface with whitewash.
A little later the wife planted flowers, and I set the pool pump.
In the summer it became clear that fountain with a flowerbed become a real “center of gravity” — a place of leisure for the household. Have to build a sofa.
A. MATVEICHUK, Zavodoukovsk, Tyumen region.