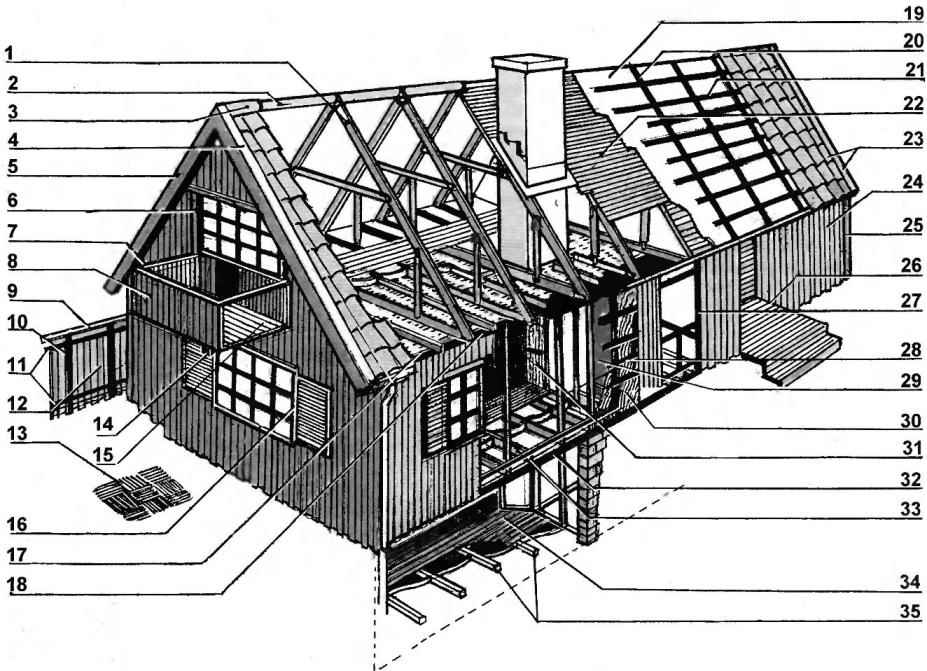 Finnish design houses have established themselves as comfortable, warm and resistant to seasonal phenomena and time. About the peculiarities of laying the basements and foundations of such country houses Builder says Finnish Pentti Jormanainen.
Do you know how are called the parts house? If not, carefully review Fig. 1.
And what determines the strength of the structure? It is known that the load that can withstand bearing and protecting designs of the house are due to natural phenomena under the influence of its own weight structures and are associated with the operation of the building. The various types of loads and impacts experienced by the house, as shown in figure 2.

The choice of method of laying and the Foundation of the device is exposed to the frost depth in this area and the total load used in house building materials. For example, a house built of wood, allows for a much greater draught of a Foundation than a house built of brick or stone. 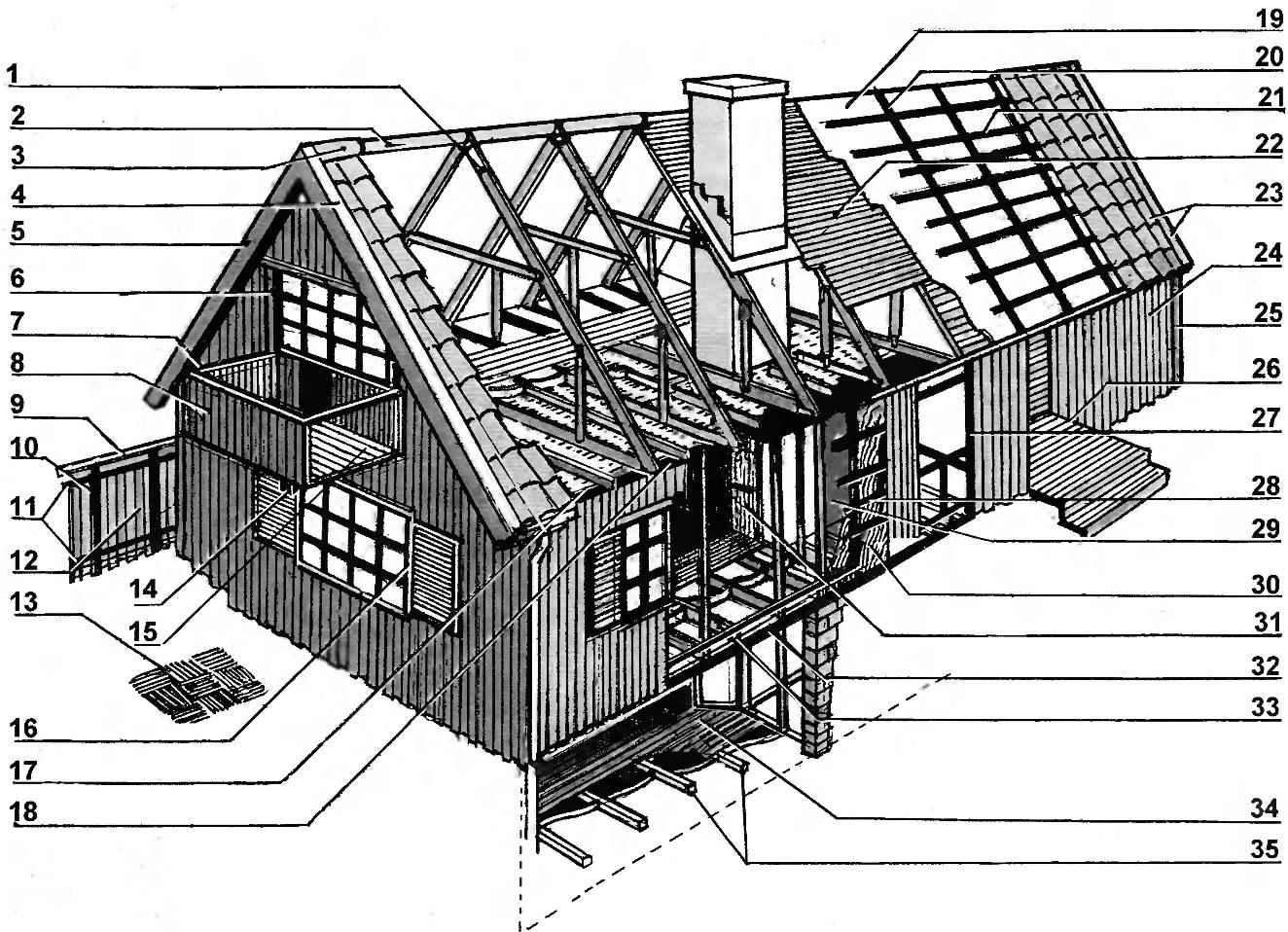 4 — side boards of the cornice;

5 — the front Board of the cornice;

11 — the horizontal slats of the fence;

12 is a vertical plank fence;

14 is a cantilever balcony;

30 — film to protect it from draughts;

When the device of foundations a Foundation is the ground located above the freezing depth. Between the base and the slab provide insulation. In this case, as well as collapsible soils as the Foundation of small houses use solid load-bearing concrete slab (Fig. 3) fixed beam, which is placed around the perimeter of the building. 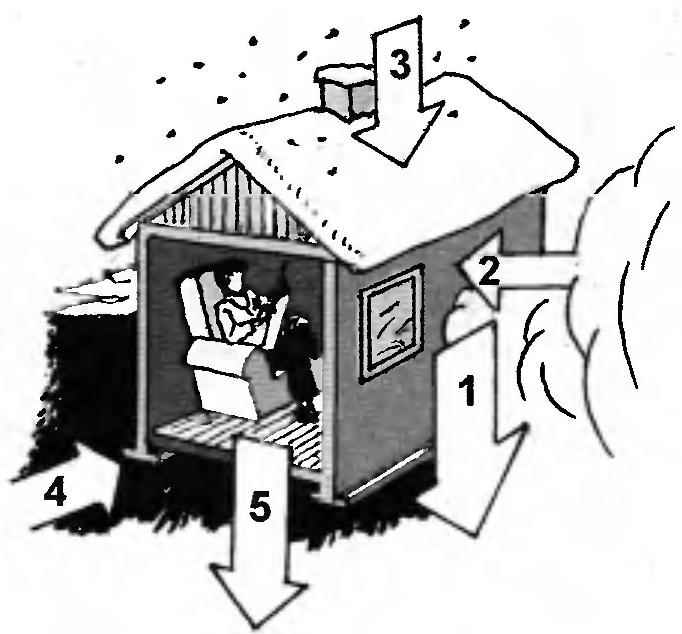 Fig. 2. Loads acting on the building:

Insulation of Foundation suit on the outer side of the base (Fig. 4). As a finishing coating the outer surface of the cap can, for example, use of asbestos-cement or thin concrete tiles. In Finland sell special blocks with an exposed surface of the cap, which consist of concrete slab elements and the outer jacket made of cellular plastic. During the molding of the blocks in the factory plastic elements serve as a form to obtain the desired outer surface. 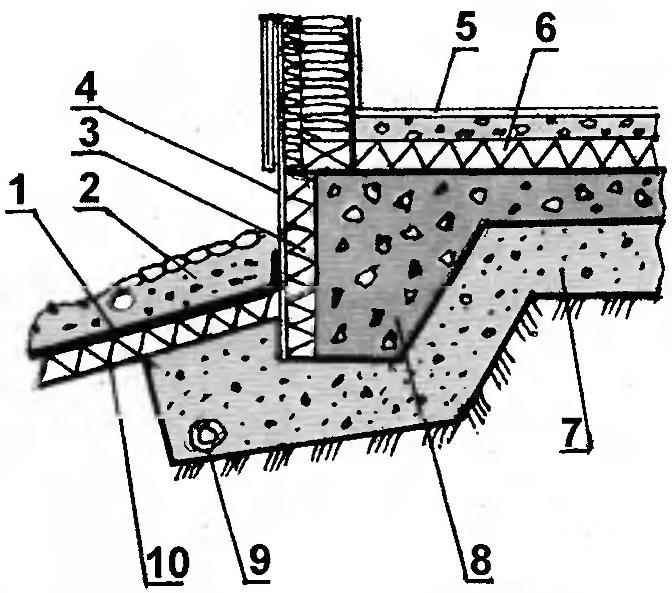 Fig. 3. Node low-depth Foundation in the form of a solid monolithic plate:

4 — external finishing layer of the cap;

10 — layer of insulation (laid around the building)

Shallow foundations with the underlying layer, which ukazyvayut on the surface of the earth can be done in the form of a tape carrier base and a separate floor construction (Fig. 4). Then the basement slab and basement can be built from concrete or blocks. The concrete slab should be cast in place together with the I-beam around the perimeter of the building and to insulate the outside of the special insulating material (Fig. 3). The base plate is cast directly on the bearing soil. Can be used for this blocks or slabs of cellular concrete or other light materials, which are placed on the surface of the substrate, using a levelling mortar. 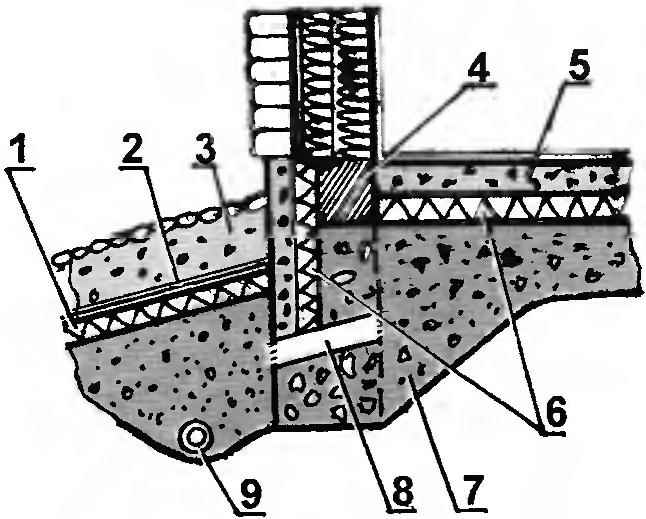 Fig. 4. The device node low-depth of the strip Foundation:

They are used in the Foundation below the freezing depth. In this case, simultaneously with the Foundation, you can build a basement under the house. 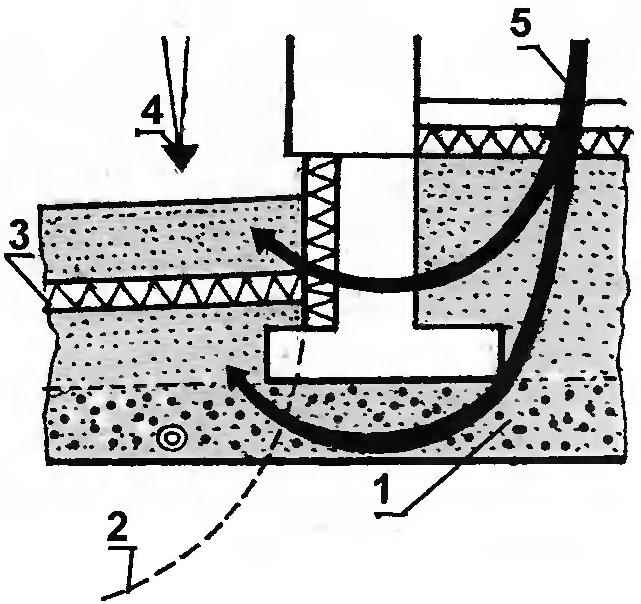 Fig. 5. Buried under the basis applied compacted layer of gravel below the elevation of the soil at low temperatures from damaging the Foundation:

5 — the direction of positive temperatures

Construction of a basement and a strip Foundation can be made entirely of concrete (Fig. 6B). Strip foundations are also often constructed of lightweight concrete blocks or slabs (Fig. 6A, B). The ceiling over the basement can be cast-in-place or monolithic cellular concrete with the use of plates or blocks (Fig. 6A) or may consist of special designs (Fig. 6B).

A Foundation of concrete blocks:

In the Foundation of special concrete basement blocks:

6 — unit base of the Foundation.

They are used in the case when the surface area is not smooth, and under the building don’t do basements. To their dig trenches or individual pits. Columns can be put in place of bricks or blocks. Ground beam does not need to be isolated unless necessary. The space between the floor of the building and soil can be filled or left blank. The design of the first floor in such cases is arbitrary: you can use concrete blocks, cellular concrete blocks or foam concrete, flooring of wooden beams or monolithic concrete slab

PROTECTION OF FOUNDATIONS AND BASEMENTS FROM FREEZING

When constructing building foundations should provide measures to protect the grounds from freezing. The depth of frost is influenced by the climate (temperature, snow depth), type of soil and the internal temperature of the building.

Frost-free grounds are the rocky soil, coarse sand and gravel. The freezing of the moraine deposits is variable. It is clear that for frozen soils the foundations should be laid below the freezing depth of soil.

The soil beneath the building, have the simultaneous effect of external cold air and the heat coming from the building.

Insulation reduces the influence of low temperatures on the base of the building. It can be stacked on the external side, both sides or in the construction of the basement inside the Foundation wall. The best results are achieved if the insulation is on the outside of the Foundation.

Around the building, the insulation is usually placed within 1 m around the Foundation. It lay at a depth of about 30 cm so that it was with the slope of the walls of the building (Fig. 3).

As insulation used various insulation materials (including plastic) with a density of not less than 20 kg/m3 and, if possible, with minimal (less than 2%) degree of hygroscopicity (vlakovo-gamemost). The thickness of the protection depends on the material. So, plate of porous plastic has a thickness of 5 — 15 cm, and made of light gravel — 2 to 3 times more.

The insulating material must possess not only good insulating properties but also conform to the standards of strength. Therefore, when choosing a material it is necessary to consider perceived them load.

The best time for laying of insulation — after the device strip Foundation, Foundation slab was installed and laying of the drainage channel. After finishing these works, you can immediately start leveling the surface. To make the insulation easier if in the period of excavation in the upper part of the trench to leave the necessary space with a depth of about 400 mm. width of about 1200 mm (Fig.7). 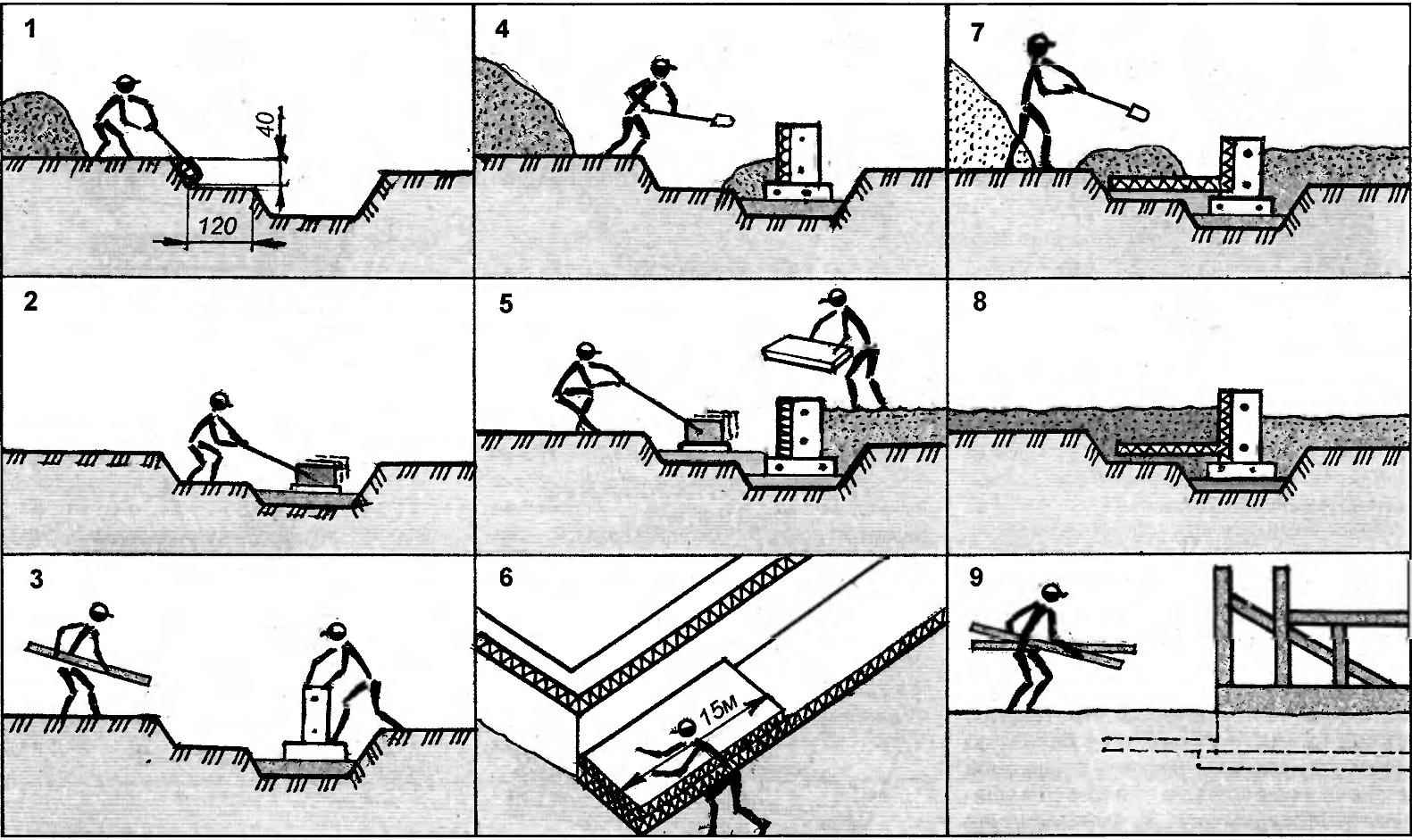 Fig. 7. Progress of works on the structure and insulation of the foundations (best works on laying of insulation to start immediately with the preparation of the base of the Foundation):

3 — laying the concrete blocks of the Foundation;

8 — the alignment of the ground;

9 — installation of the frame house

Once done drain the device and its protective layer, the trench along the strip Foundation or basement filled with gravel to the level of the laying of insulation. It is expedient to provide two layers of insulation, each of which stack plates or sheets overlapping or edge to edge, if the thickness of leaves longer than 5 cm Plate is mounted with a slight slope from the house, and on it to protect it from moisture on top of waterproofing in the form of a plastic film, etc. In the corners of the insulating layer may be thicker than usual.