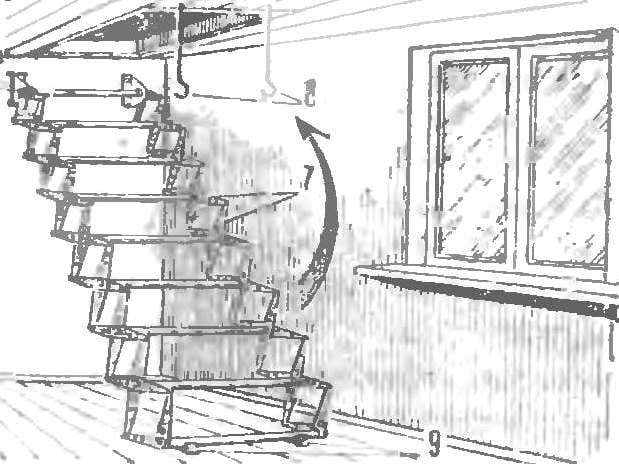 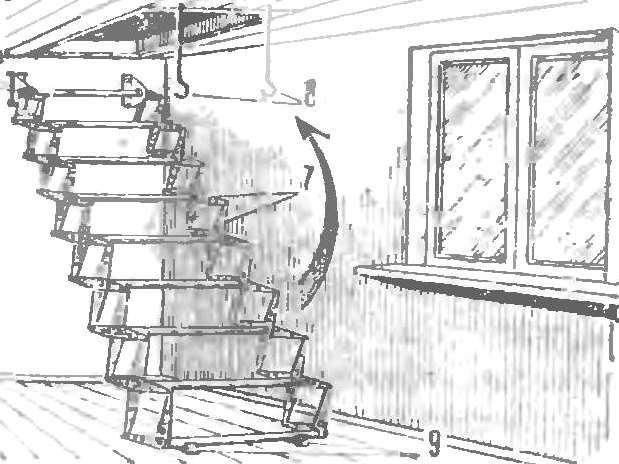 In the cottages to place a convenient staircase to climb to the loft difficult. And the output, it turns out, there is. He is to use long-known designs parallelogram mechanism which is sometimes used for attachment of the wall lamps. Only in our case we need two such devices, connected by rails. It is convenient to use as rungs of a wooden rolling pin. At their ends, holes are drilled where the glue is placed on the metal studs. The ends of the amplified thin aluminum rings. Step of the steps is selected so that would the stairs were easy to climb and big and small.

The upper crossbar is mounted on two brackets from a steel angle, which are attached by large screws to the wall under the hatch leading into the attic.
At the ends of the rods protruding from the brackets, put the short links of the parallelogram mechanism made like the long links made of aluminum strips with a minimum thickness of 5 mm. they are drilled through-holes to facilitate; the strength of the St does not suffer. The links are placed alternately on the axis of the rail, then screwed the nut. Between the links are connected pivotally by bolts or rivets.

The folding ladder:
1 — crossbar, 2 — aluminum ring, 3 — bracket, 4 — link internal short, 5 — external short link 6 — pin-axle 7 — long link, 8 — hooks for “ladder” in the retracted position, the 9 shoes.
Folded design hang on in advance set in the ceiling hooks. In the “straightened” position our home ladder rests on the two small Shoe nailed to the floor.
A. ALEXANDROV