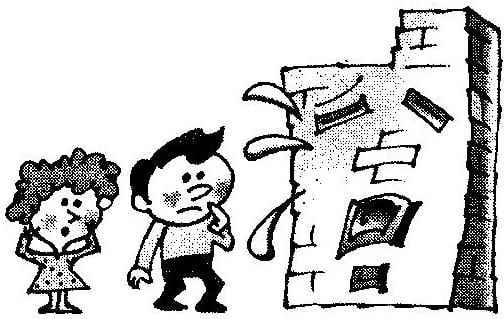 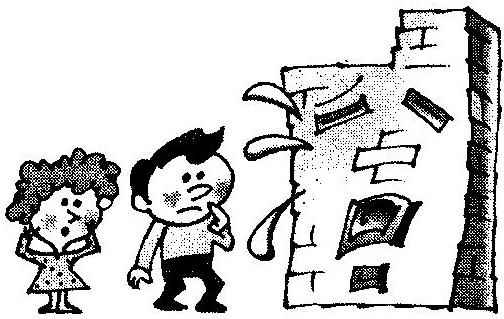 Along with gas stoves and fireplaces for many gardeners often pay tribute to the various kinds of furnaces — heating and cooking options to traditional Russian. Especially in homes year-round. It is understandable: it is nice in the cold of winter to bask in the breathable warmth of the bed.
Where heating is mainly firewood, furnaces often suffer from one very serious drawback: they are condensed, that is, their chimneys accumulate a black liquid with a specific smell, which is formed by deposition of water vapor and steams of resinous substances on the walls of the chimney. Over time, the condensate permeates the masonry stove, it becomes raw and black, begins to break down, and pull flue gases to decline. Moreover, the odors are so strong that in some cases, staying at home becomes unbearable.

On the outer sides of the furnace spots appear, the stripes are black, and sometimes a large part of the furnace becomes black. If the brick is soaked in shallow, it is best to cut and plaster such places cement mortar. But most often the clutch replaced because in the first condensate appears at the top of the furnace and the bottom of the tube, i.e. the attic or the floor — there, where does the furnace itself.

Even in the dry fuel has a small amount of moisture. In addition, contained in the fuel hydrogen, two parts by weight of which are connected with one weight part of oxygen also form water vapor.

Flue gases with low temperature and a certain amount of water in vapor form, passing through the channels of the furnace and the tube cooled in contact with cold walls of the pipe, and settle on them, the drops drain downwards. The abundance of runoff depends on the amount of condensate.

The available water in the hot (flue) gas is better vaporized, the temperature of the latter must be elevated. The well-heated walls of the pipe the settled drops of water quickly evaporate.

Established practice, that the normal temperature of the exhaust from the furnace gases before entry into the tube of about 123° — 140°C and at the exit from the chimney into the atmosphere — 100°C. If the flue gases from the upper flap (see Fig. 1) reach a temperature of about 250°C, condensate never, improves traction, furnace heat faster, while consuming less fuel. 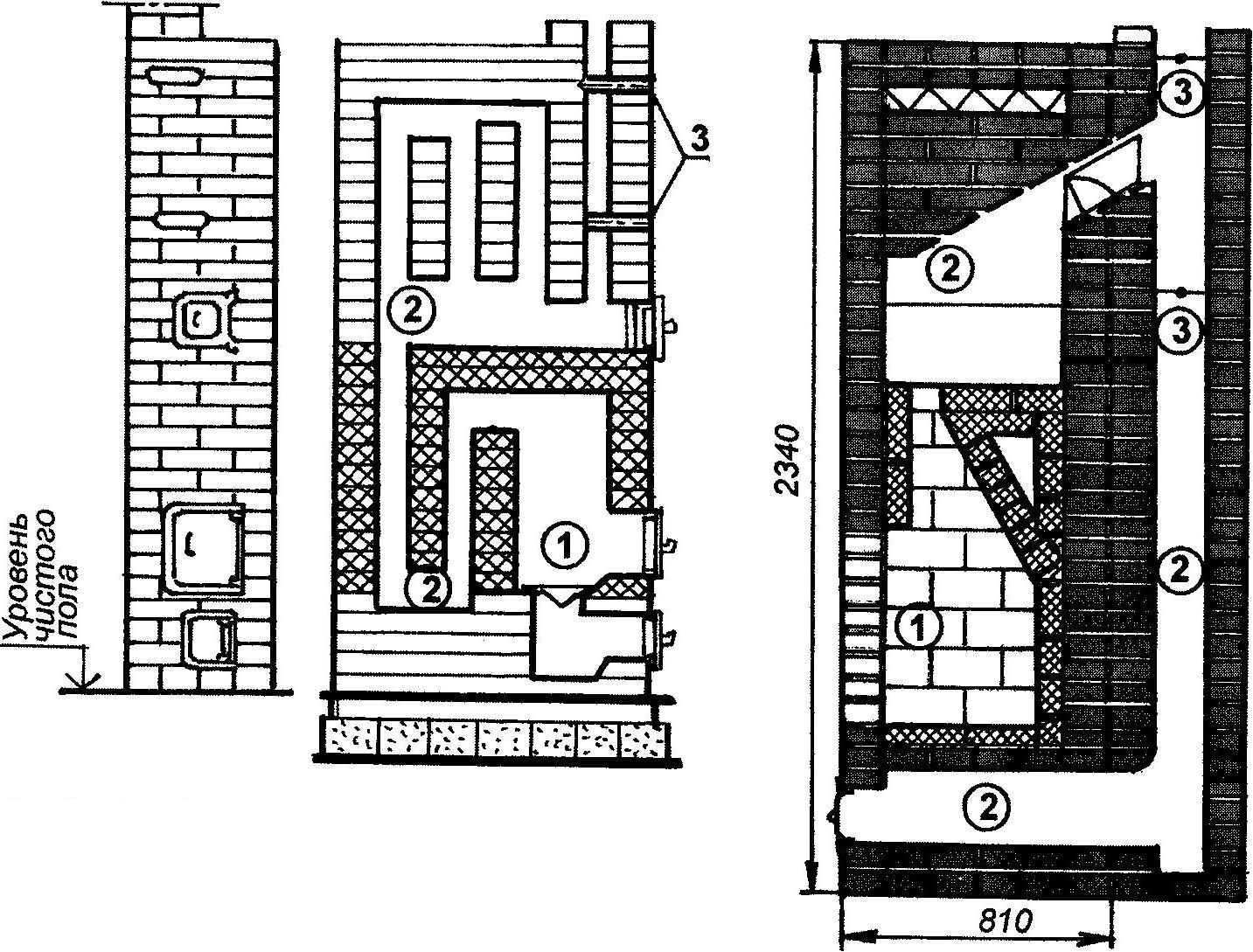 Fig. 1. Oven (front view and section). The right shows the cross section of the fireplace: 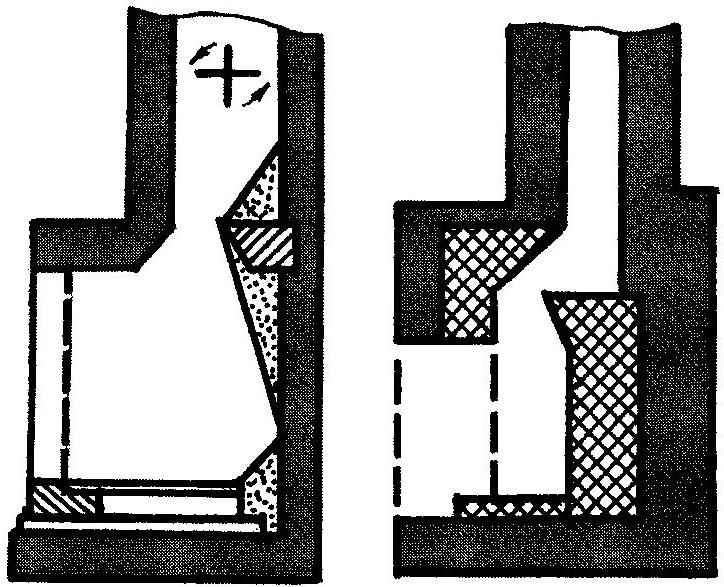 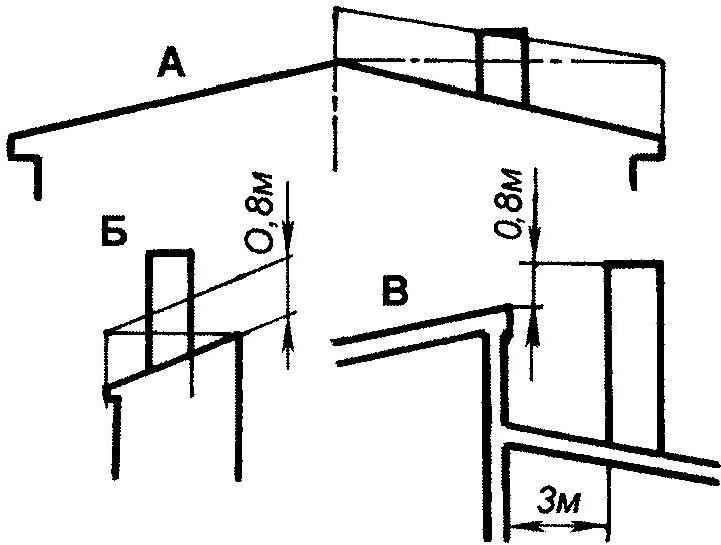 Fig. 3. Size of chimneys over gable roof (A) single (B) and roof with ledge (In) 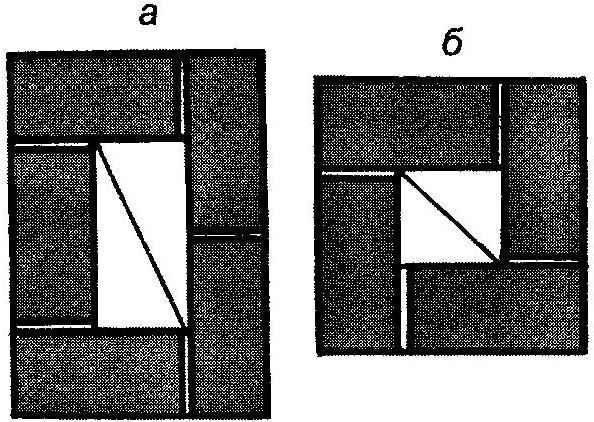 Fig. 4. The cross section of the chimneys:

Fig. 5. Insulating thickening in the wall of the chimney 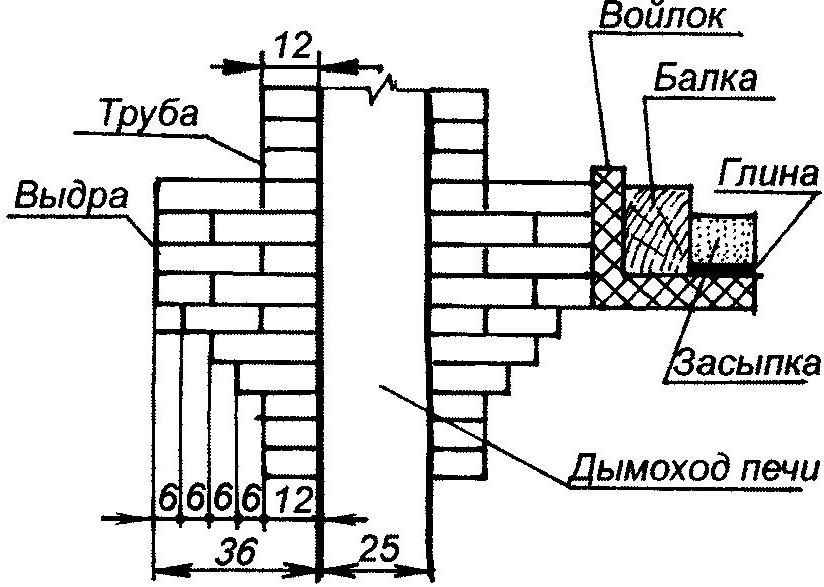 Fig. 6. The device otters (the junction of furnaces and tube) 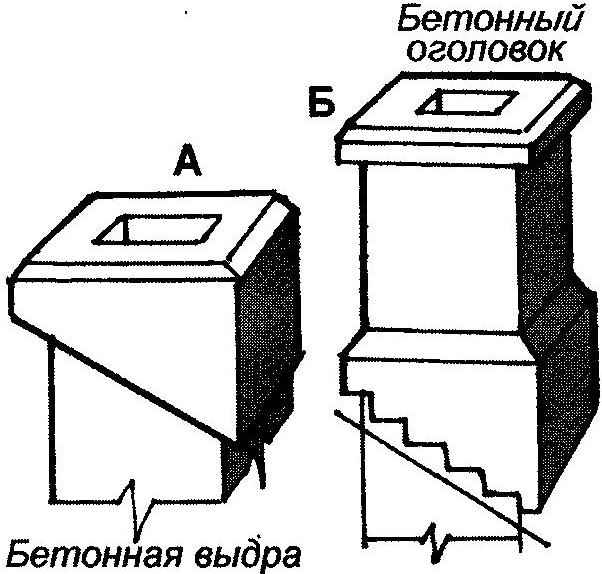 It is noticed that in the warm season or the condensate is not formed, or formed in small quantities. In the condensation the greater role played by many features of the device of the oven: dimensions of the grate, the level of the floor, the device of a hearth of the Russian furnace, the dimensions of the channel, wall thickness, length and height of the chimney, the temperature of its heating, humidity of fuel used, the temperature of the exhaust gases and even the number of flues in a furnace.

Various cracks in the pipe and the furnace through which cold air enters, also contribute to the cooling of hot gases, cooling pipes and condensation. When the cross section of the channel above the pipe required for a given furnace, the flue gases rise through it very slowly, and the cold outside air cools them in the pipe.

A great influence on the thrust force, that is, the output of flue gases, have the smoothness of the walls of the chimneys. Smoother than they are, the stronger the attraction. All the roughness in the pipe reduce thrust and hold myself to soot.

The height of the chimney must be at least 5 — 6 m, considering from level salnikovoy the camera or the hearth of the Russian furnace. The thickness of the masonry walls of the pipe should be performed in polkirpicha (12 cm): thinner walls heat up quickly and cool down quickly, which leads to the formation of condensate. These pipes should be insulated (see Fig.5 and 6) fireproof insulating material (slag wool, glass wool, teploobmennye plates, etc.).

Sometimes to improve the draft in the furnaces is necessary to shift the pipe, reducing the dimensions of the chimney (see Fig.4).

With the same purpose, reduce or increase the height of the pipe on the roof (see Fig.Z). Do this until until I get a satisfactory result. And the pipe above the roof during the inspection can not be put out of brick, and to make the size of the channel from a roofing steel square, which will be brick lined within the attic. The pipe lift or lower when testing, achieving the best results and determining its height above the level of the roof, then finally lay out a tube of brick.

In places, narrow chimneys should be stesyvat or lay angles (see Fig.2) to provide a more smooth transition of the gases; they must be well rounded and the best possible level that they were smoother and less destroyed from the heat.

WHERE THE WIND BLOWS?

A thrust in the pipe is also affected by the wind. Better when it blows horizontally: to meet the pipe, the flow is deflected upwards in the direction of the outlet pipe, where the air is discharged, and better gases out of the chimney, as if sucked from him. If the wind is blowing at an angle down, it blows (knocks) gases in the tube, and the thrust is reduced to a minimum.

To reduce the wind effect on coming from the chimney gases, it is better to cover them on top of the metal caps-umbrellas with sloping planes. Hitting on them, the wind deviates from its original direction and does not fall into the pipe. In addition, the cover protects the top tube from the weather, and her wall from wetting and erosion by rain jets. In a wet pipe thrust is greatly reduced.

IN THE OVEN PUT?

An important role plays the process of combustion. Wood ignites at temperatures below 300°C, coal — at 600°C. the Normal combustion process occurs at a higher temperature: the tree is at 800 — 900°C, coal — at 900 — 1200°C. Such temperatures provide continuous combustion under the condition that air (oxygen) is supplied without interruption in the required combustion quantity. When it is fed too much, the fire will cool down, and burning to worsen, since for a good combustion requires a high temperature. You should not use the stove with an open firebox.

In the complete combustion flame color is straw-yellow, and the smoke white or nearly transparent. In this case, almost no soot is deposited on the channel walls of the furnace and pipes. In case of insufficient oxygen supply to the furnace fuel burns down not completely, the wood to smolder or burn with dark red flames, and out of the pipe is black smoke, which carries with it a tiny unburned fuel particles. In this case, the channel walls of the furnace and in the pipe these soot particles are deposited and quickly clog them.

Soot produced from different fuels, but most often from one in which there is a resinous substance (softwood, birch, especially the bark, coal and especially liquid fuel). Besides that it clogs the channels, soot can burn, and it is dangerous in the fire relation. When applied, dry aspen firewood for fuel, almost no soot is deposited. Therefore, when the furnace is recommended periodically used aspen wood at least once a week, better yet two, and if three great. The soot from this fuel is gradually burned and the chimneys cleaned. The only drawback of wood such that they “shoot” (clap, and sparks).

WHAT IN THE ATTIC?

You should pay attention to the insulation of the attic space and there are pipes. The attic should be relatively warm, then the tube is not so easily appeased. This is a mandatory requirement to combat condensation.

Condensation contribute to the so-called hog (rocker arms) in the attic. In addition, they are unsafe in the fire relation. So hog it is recommended to arrange indoors.

Winterizing the pipes in the attic of the produced slag wool or glass wool, of which sew thick (2 — 4cm) “quilts”, and using the same thread. The pipe is tightly wrapped in these blankets. Can be made on the basis of the slag plate (1 part of cement and 3 to 4 parts of slag sand). These plates are the right size with a thickness of 3 to 4 cm fastened with clay mortar to pipes, good joints accurately.

A few words about the furnaces themselves. There are multi-channel furnace or a demon-channel, with large internal teplovosprinimajushchimi surfaces. In such furnaces the hot gases give up a lot of heat, and flow into the tube chilled, forming a large condensation. The fault is not so much the potters, how many tenants, demanding to lay down the stove with a large number of channels “for warmth”.

Remodel or rebuild of the furnace is necessary in order to increase the temperature of the exhaust gases. This is achieved through the following measures: reduced internal teplovosprinimajushchimi surfaces of the furnace or device in small Windows-holes from the firebox to the last and penultimate flues.

For adjustment of such furnaces have to dismantle part of the chimney masonry from the front side or another, often from both sides, and after correction of the lay so that the repair area was no different from the previously completed masonry.

For example, when the furnace has seven chimneys, in order to eliminate the condensate, one or two channel (last or penultimate) or only one of them is turned off, overlapping the top and bottom than the higher temperature exhaust gases.

These channels can not be disabled, and to arrange the firebox to them small Windows cross-section is approximately 5×5 cm They lay out a square brick to their area was not less than 25 cm2. This method is also reliable’ as it increases the flue gas temperature to normal: a trickle of hot air from the firebox into the channels, raising the temperature. Practice has shown that the greatest effect is a minor reduction in the channels, and the other two (last two) raise a window from the firebox.