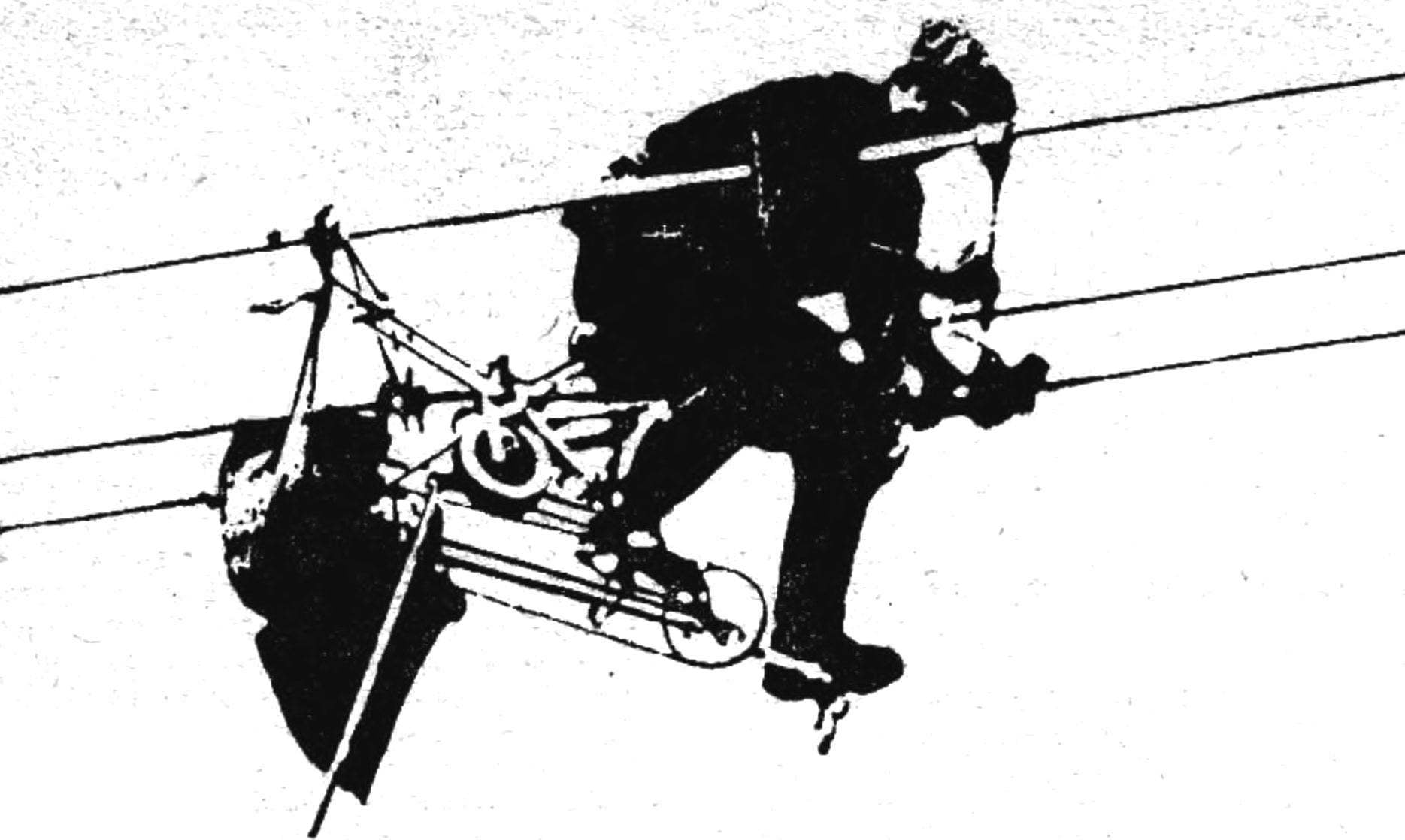 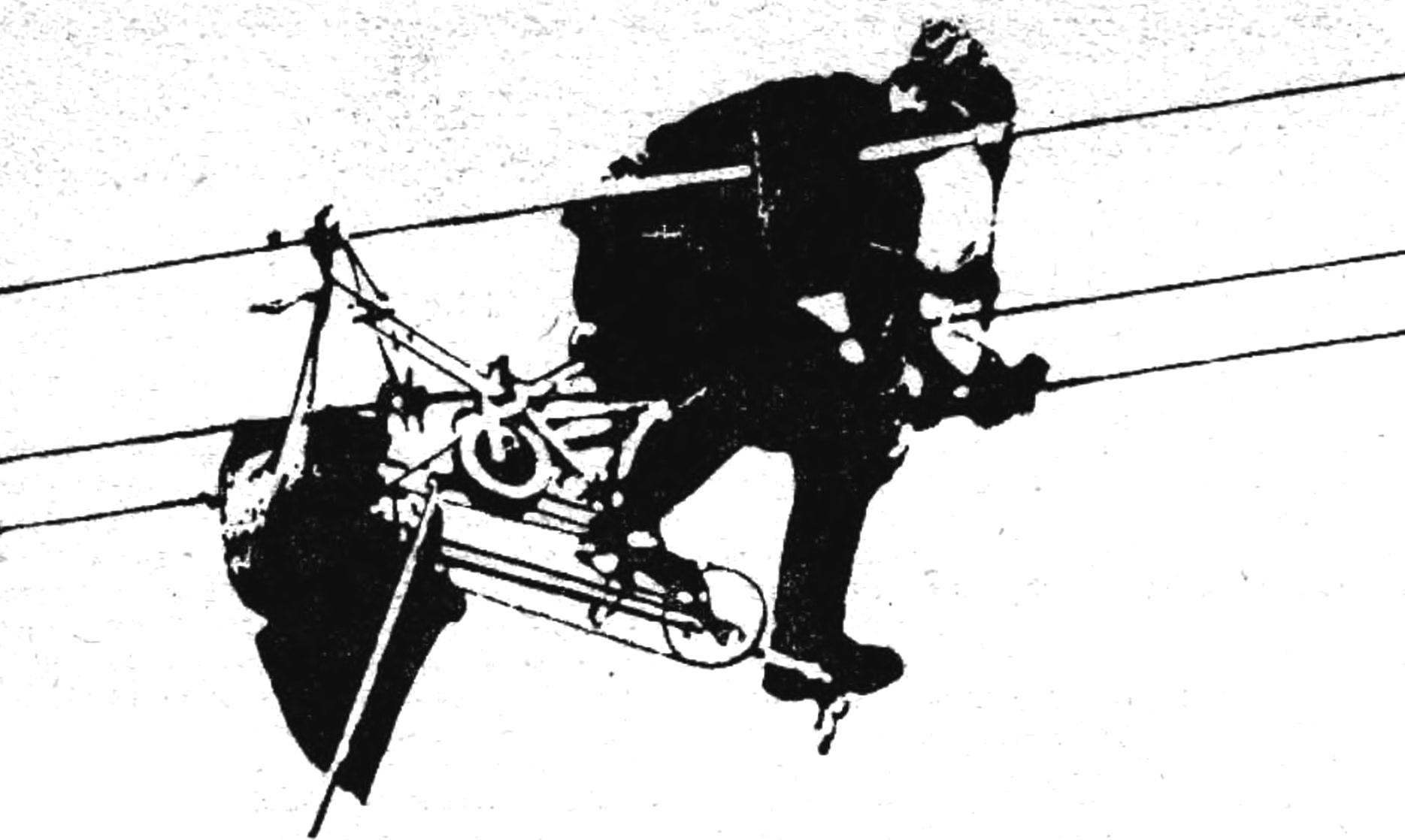 At the construction sites of the Baikal-Amur mainline and KAMAZ, large and small Komsomol — everywhere can be used a variety of mechanical AIDS created by the innovators of the construction sites and shown recently at the Exhibition of achievements of national economy of the USSR.
There were organized intersectoral thematic exhibition “Small-scale mechanization in construction”, which demonstrated hundreds of various manual machines, simple appliances and devices. Use them not just to reduce the share of manual labor on construction sites, but also increases productivity, improves quality, improves production standards.
Some of the exhibits in this exhibition we offer young innovators construction projects, members of the NTTM.
WORKS SHOT
It is said that when the first in Russia, the Builder decided to build a home, it is pulled along the tops of the nearest trees — “build” them, hence the word “build,” and this, as we would say today, bearing frame hung panel — paws coniferous trees. Such walls are easily passed through even the wind.
In our days, when one of the earthquakes in Japan pushed modern high-rise buildings, they were unharmed boxes, like bricks, turned to the other side. This strength brought into the construction of reinforced concrete, replaced wood and brick.
However, the same strength turns against the Builder when you need to, say, punch a hole in the floors or just to attach things to the wall, for example, to hang the battery of steam heating. Those will require not only a tool of the hardest metal, but also a great strengthening attached to it.
This explains why in recent years on construction sites has been applied as an unprecedented tool — gun Builder, assembler. The powder cartridge it shoots fasteners nail the dowel, indicating the initial velocity 500 m/s as military bullets. A series of such shots can be quickly nailed to the wall of any mounting brackets and other installation details. However, like with real bullets, there is a danger of ricochet.
Leningrad branch of the Institute “Vnipipromtechnologii” developed an improved version of this tool — pyrotechnic mandrel ODP-4M (Fig. 1). It is designed for the same building cartridges In-7 In-8 In-9, however, the peculiarity of its construction eliminates ricochet. Much lower and the volume of the shot. But most importantly — high productivity tool: using mandrels you can easily score up to 300 fasteners nails for a change, attaching electrical or plumbing equipment. And last but not least, it is convenient to operate, because the bar is small — 215X57 mm. 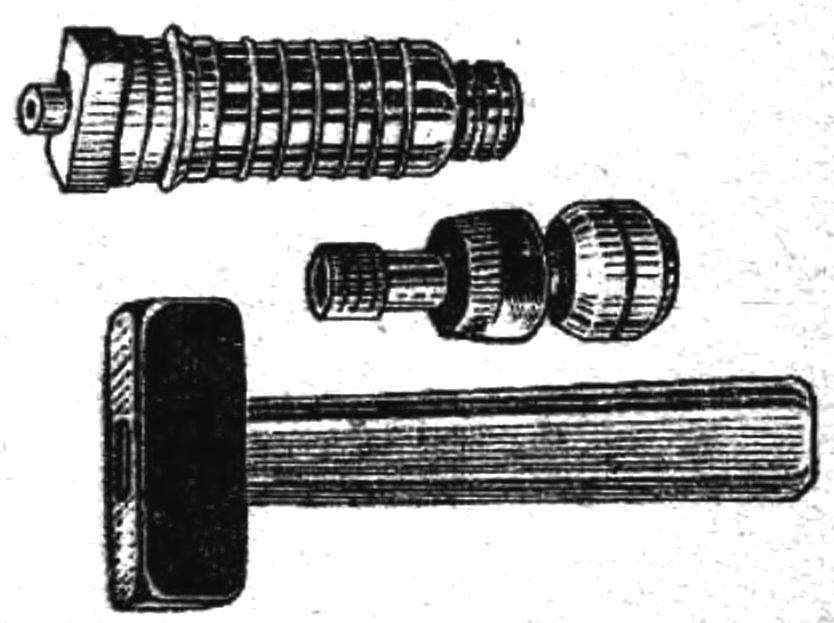 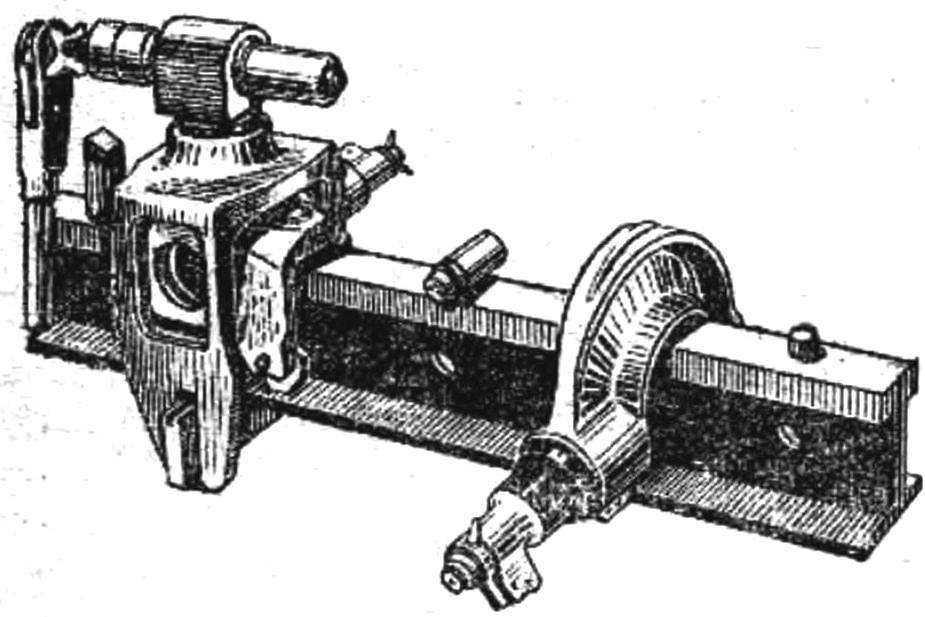 Fig. 3. Pyrotechnic drill (right) and relisorm.
For punching the same holes in hollow-core slabs floor slabs innovators of the Moscow SU-56 A. Martynov and V. Pushkin designed pyrotechnic shock column. It is indispensable for the wiring and suspension fixtures, as the device does not require scaffolding or podmostej and greatly increases productivity.
The column looks similar to the kind of the gun (Fig. 2): a long tubular rod, at the end of which is fixed a barrel from a construction gun. The column does a one shot hole with a diameter of 20 mm and plates with thickness up to 50 mm. Weighs “the gun” fitter 8 kg. It is easy to construct and can be manufactured in the workshops of the mounting preparation of the site.
Another profession a shot — electrical work. Author’s certificate No. 155205 noted an improved pyrotechnic press for processing cable ends that are created in construction and commissioning management in Leningrad. It is also a very compact device in which the energy of powder gases presoviet the ends of the aluminum cables. Set of interchangeable nozzles allows for solid compression to make the ends of the cables needed to connect the form. With this press you can also connect the core wire. Productivity per shift — up to 300 opressovannyh lived cross-sections from 25 to 240 mm2.
The most amazing powder tools are the builders of Railways. For them, the innovators of the suburbs created devices to handle the rails laid (Fig. 3).
The first of these tools is dropbolt-2 — no need to have different devices for the formation of the bolt holes at the ends of the joined rails. It resembles a large C-clamp with a built-in pyrotechnic cartridge. The charge rifle blank cartridge in one moment pierces a hole with a diameter of 30 mm and a metal thickness up to 16 mm. Per hour of powder thanks to this “drill” is possible to do up to 50 holes.
The same basis and in another unusual contraption could be called a powder with a hacksaw, as it allows you in one minute “cut” the rail. This pyrotechnic relisorm PR-1A, intended for the preparation of the end of the rail when laying the railway track or the welding of rails in the scourge. Externally relisorm similar’ large bench vise, tilted to the rail and clutching to him the powder head. The minimum length of the break-off end is 250 mm. the Effect is achieved thanks to the energy of powder gases that tell of the power head load equal 30-40 so one break is enough, two shots; charge — rifle blank cartridge. Interestingly, relisorm deform the end obtained: the maximum surface roughness of ±5 mm. device Performance — 15 breaks per hour.
CYCLING THROUGH THE WIRES
It looks like a circus. However it “performs” is not an artist, Builder, installer of high-voltage lines. He takes a strange looking Bicycle with small wheels without tires, rises to the high voltage line pylons, and setting the bike on one of the three wires going to it high above the ground, twisting pedals and stopping from time to time for the execution of invisible operations from the bottom (see photo in header).
Isn’t that amazing? It was created in the Leningrad branch of the Institute “Orgenergostroy” especially for remote mounting struts on the lines of three wires. Called just, business-like: mounting cart Mr-155A (Fig. 4). 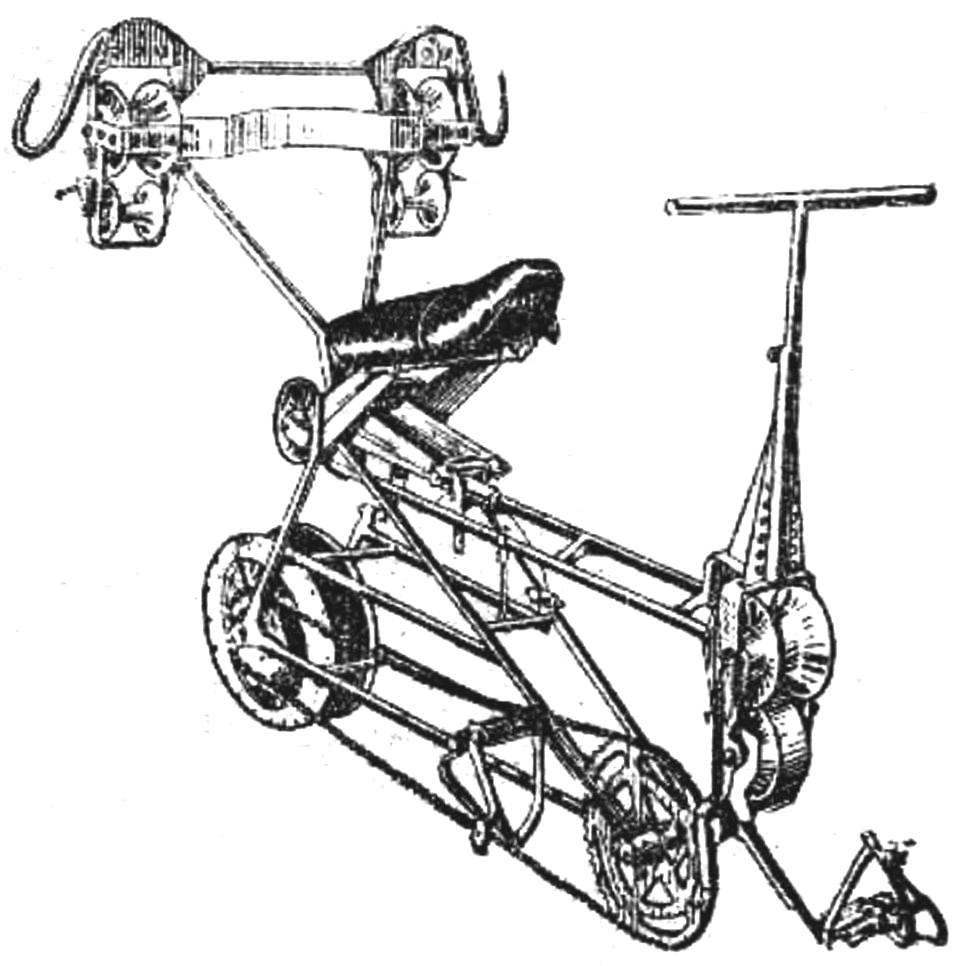 Fig. 4. Bike fitter power lines.
It is a lightweight structure consisting of four welded frames made from hromansilevyh pipes. The frame is pivotally connected. They fortified five rubber rollers, four of which are driven, and one presenter. These roller wheels trolley supported on all three wires, what provides balanced load on each of them and stores the expected location of the wires in the corners of the triangle.
Leading ice rink assembled on a rear Bicycle hub, which allows you to slow down on steep portions of the wires. Truck is also equipped with eccentric clamp — Parking brake double action. Drive truck — foot, is a chain-type Bicycle. Unusual transport spider-man manufactures the Moscow mechanical plant trust “Energomechanical”.
Metal openwork support electrician climbs the twists of rungs like a ladder. And what about when these poles are reinforced concrete pillars? Tested the old nails used on wooden poles, are powerless: they are the cutting edge will not hold on the concrete surface, as it can’t really get in there.
Designers of Gastrojejunal of Ministry of construction developed, and Odessa mechanical plant produces a special soft claws for lifting of reinforced concrete poles (Fig. 5). They are a personal device for work of the installer on the conical and cylindrical concrete piers and interlocking and communication.
New claws represent the Crescent grips, instead of the tip from which rubber areas are well kept on concrete surface. 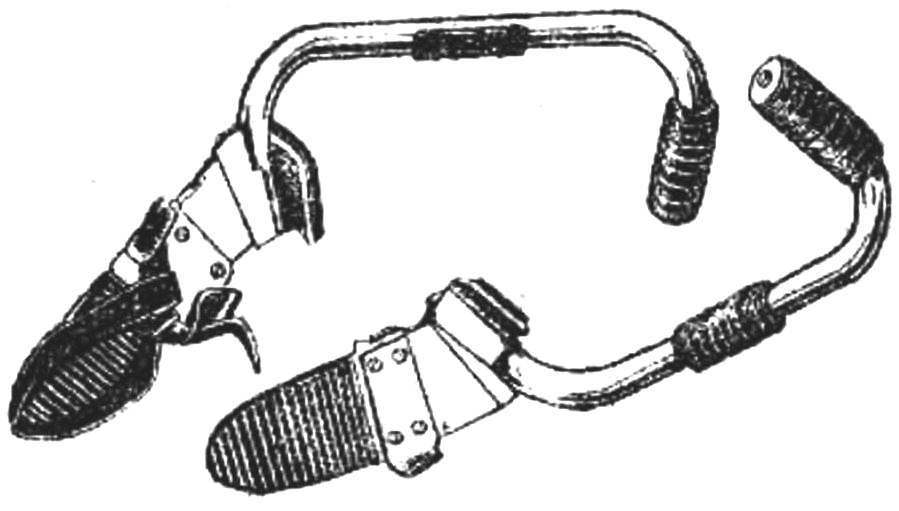 Fig. 5. Soft claws.
Fig. 6. Key… for insulators.
The claws are made from aluminum alloy D16T. They are suitable for use on reinforced concrete conical poles Ø 170 mm (at the end), cylindrical Ø 200.
Arsenal electricians-riggers complete with original key for screwing of insulators in the hooks and pins (Fig. 6). Until now, it had to do simply that easy, especially in the winter.
Key, created at the Moscow mechanical plant trust “Energomechanical”, consists of a system of pivotally interconnected levers — rods. The curved rods and their Coupling form a vicious circle capable in turning the handle to decrease, clamping the insulator, or to increase, freeing it.
Simply turn the handle counterclockwise, as the levers diverge, and the key is freely mounted on the insulator. When you push the handle on the key firmly covers the two rubber insulator levers, and the’re in for a easy on the base — hook or pin.
In the folded position the key occupies little space; it weighs only 0.7 kg.
WINCH POCKET
Central design Bureau of Gastrojejunal minmontazhspetsstroj USSR developed manual lever winch with a pulling force of 1.5 tons (Fig. 7). Its dimensions are just 60X160X310 mm, weight 15,7 kg. it is Intended for lifting and moving loads I not only vertical, but also horizontally, for the installation, handling and repair work in various sectors of the economy.
The winch consists of a traction mechanism, telescopic arm, of the working rope with a hook and clips for storage of the cable. The moving part of the traction mechanism accommodated in a closed housing that provides the necessary security. 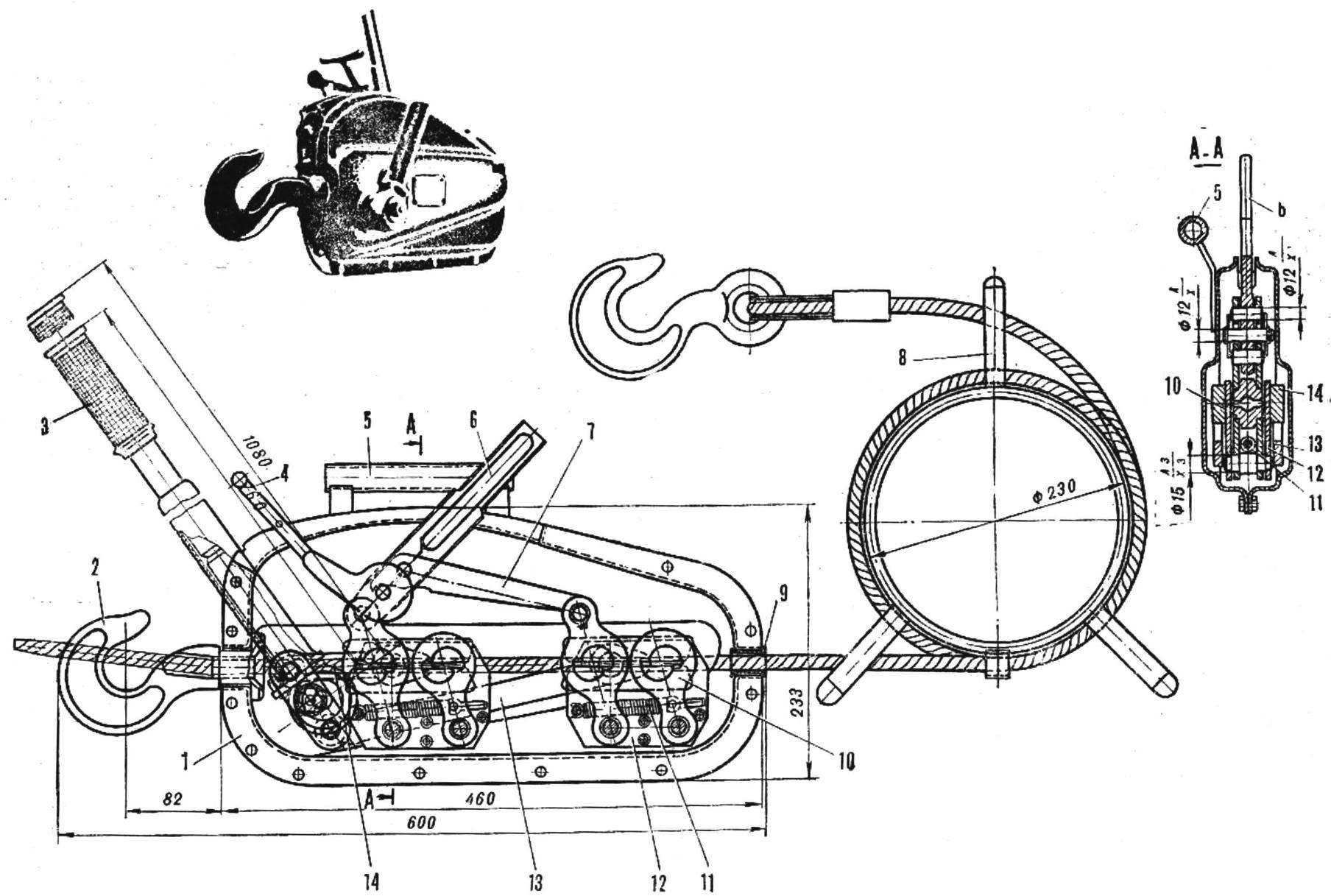 Fig. 7. Portable winch:
1 — body of the winch; 2 — hook; 3 — telescopic work arm; 4 — arm breeding of binding posts; 5 — the handle of the winch; 6 — lever reverse; 7 — thrust lever reverse; 8 — yoke with rope; 9 — sleeve; 10 — the binding posts of seizures; 11 — spring load binding posts} 12 — clamp; 13 — thrust lower (two); 14 —upper pull (two).
The principle of operation is simple. In effect it provides a lever stroke, which fits the tubular lever, increasing the applied handle force. Harness rope through the traction mechanism by two special clamps, which alternately hold the rope with a force proportional to the load, promoting it with the shipment.
During operation the hoist is suspended over the available on the barrel hook. Using the pulley, you can lift loads whose weight exceeds the pulling force of the winch. In accordance with the ratio of pulleys changes the speed of lifting or lowering a load. Rope diameter — 12mm, length — 12 m. serviced by one worker.
The winch is simple and device fabrication, Small size and weight makes it easy to work with, can be used in confined spaces, at low altitude. The winch can be included with spare tools and accessories (SPTA) transport and other machinery. Suitable for the elimination of blockages and accidents, easy for loading and unloading.
Another similar mechanism has a towing capacity of 3 t. It is somewhat bigger, a bit heavier: it weighs 52 kg, the Manufacturer of the winch — Tuapse machine-building plant named XI anniversary of the October revolution.
A. E. VOLKOV, engineer