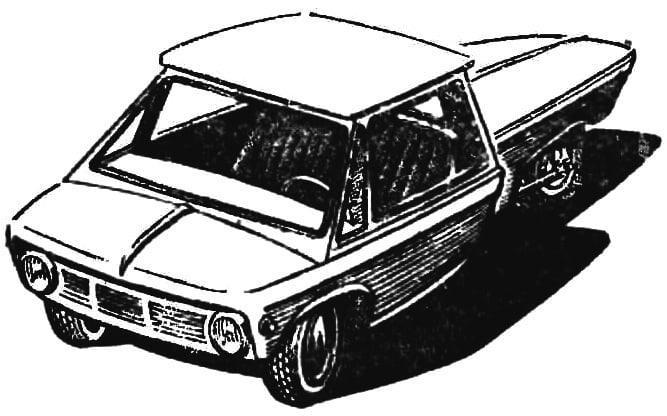 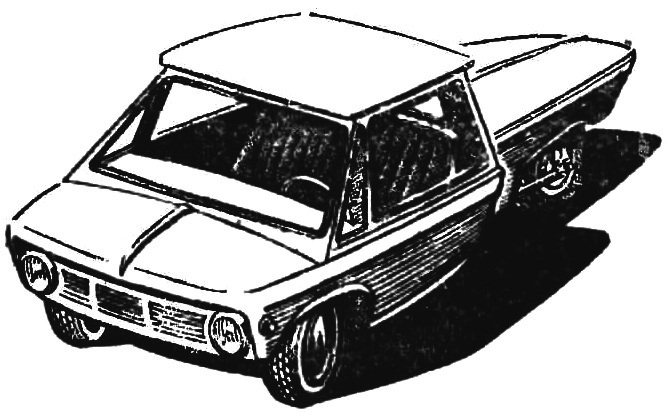 Probably not be an exaggeration to assume that at least half of the permanent readers of the “Modeller-designer” wants to make their own car. In the following constructions as the power unit it is proposed to use a rear axle of the scooter with all its nodes completely and without alterations.
Autoroller you can build on the base of the scooter. He will combine as signs of the scooter: two wheels, a control of a motorcycle type, light weight and dignity of the car: a semi-enclosed housing, relatively more than motor scooter, comfort, attractive appearance. The advantages of the new machine can also include good braking performance and more than the scooter stability, so that the center of gravity of the structure is below.
A distinctive feature of autoroller is the presence of two retractable lateral support wheels which allow the machine to stand upright in the Parking lot and maneuver at low speeds, for example at intersections.
DESIGN. Autoroller consists of a frame of scooter, an elongated plug elements and housing.
BODY. To ensure lightness, rigidity and ease of repair housing autoroller it is advisable to make the method of veclachi of fiberglass or normal tissue on epoxy or polyester resin. In the manufacture of several autorollers recommended “matrix” method of veclachi. It allows you to obtain the nearly finished enclosure surface finishing in this case is almost not required. However, the matrix surface must be extremely flat and smooth.
If autoroller is expected to produce in a single instance, it is better to use method of veclachi “model”. 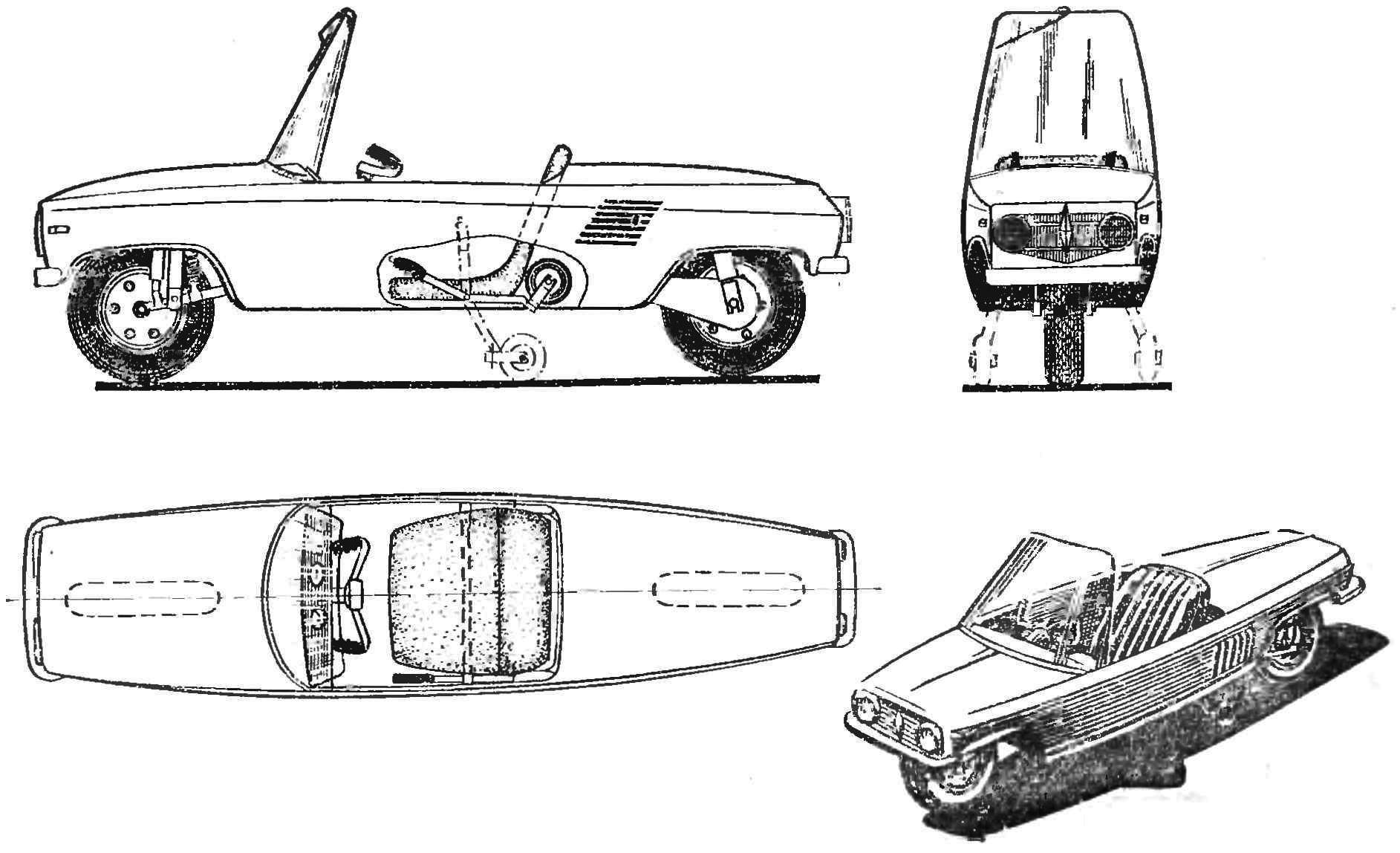 AUTOROLLER
Technology veclachi of the case are well known, it has been variously described in the pages of our magazine, collection of “Boats n yachts” and other periodicals.
After vyklicky surface level using the epoxy putty, treated with sandpaper and primed.
FRAME. For its production requires several sections of pipe hromansilevyh Ø30X1,5 or Ø3ОХ2. Design of plug-in elements depends on the type of remodel scooter.
STEERING — motor type. The stress from the handlebar to the fork is transferred via two odobleja levers and thrust are supplied with leveling tender.
SIDE SUPPORTING WHEEL. you must run the retractable side in a special niche, like aircraft chassis. The lift arm and release the wheels should be equipped with a locking mechanism. excluding spontaneous return of the wheels to the transport position. Wheels must be swivel (piano type) and provided with return springs, providing the setting wheel to position “heading up”.
All other details of autoroller used ready — from the available nodes of a scooter, with a corresponding adjustment in place.
The above proposed design or an old Vespa can be rebuilt in a more comfortable car — tricycle. The conversion will be to install the front axle from motorized С3А or С3Д and manufacture of cabin interior. As the power unit and the subassembly is used, as in the previous car, the back of the scooter. 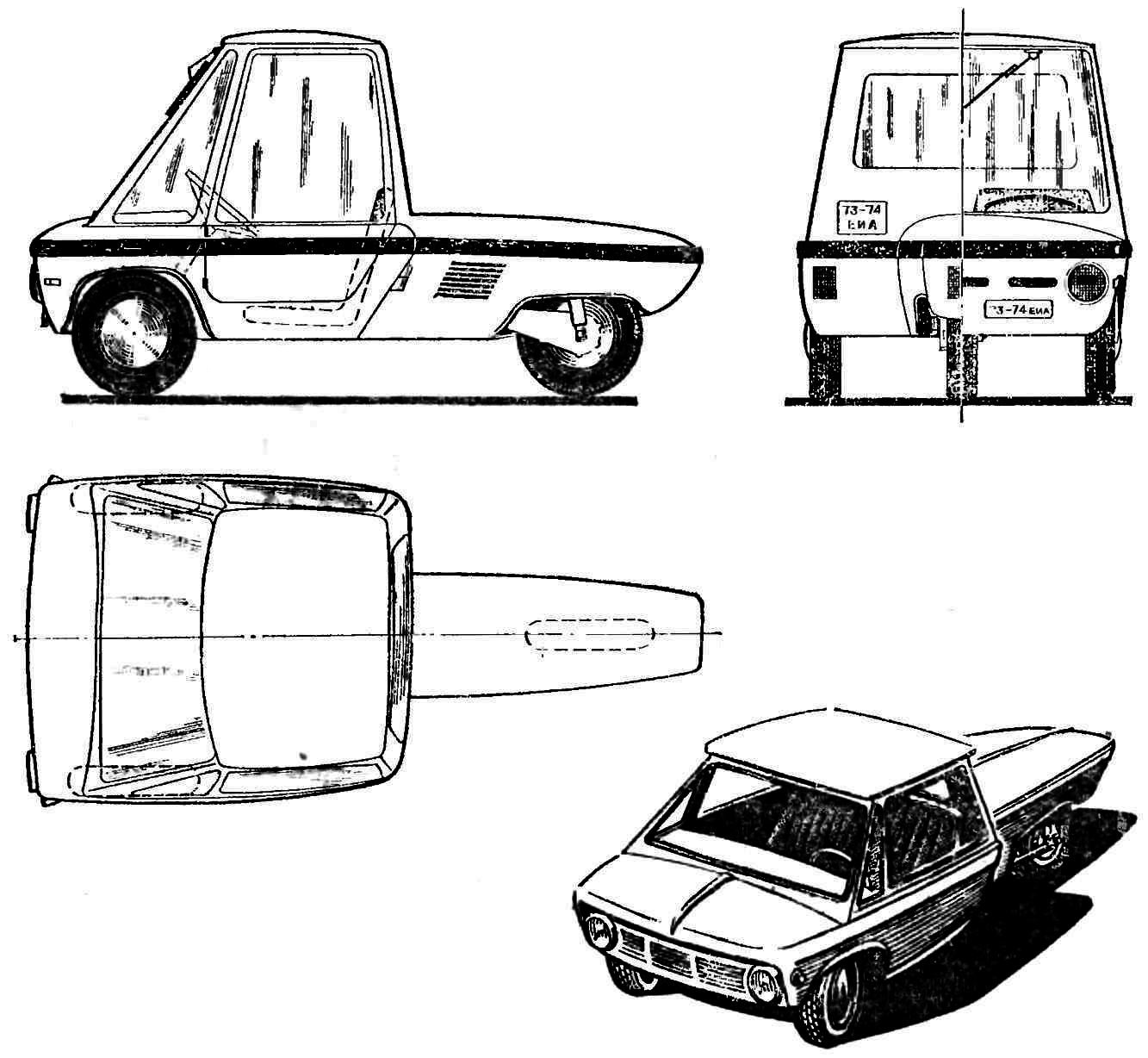 TRICYCLE “PEAR”
Designing a three-wheeled vehicle, most motorists leave his case open or provide a light tent, which violates proportion and impairs the appearance. If the tricycle to run in “classic” form of car, with hardtop, microcomputers would not look dynamic. Obviously, tricycle scheme imposes some requirements on the form of the body.
The car is the passenger cabin plus the power plant. So, perhaps, these very different components and not to combine body, and functionally separate? If the salon is separate from the power plant, its production will be simplified, and reduces the cost.
To increase the rigidity of the structure interior can be done odnodolnym. Moreover, the entire cabin can be made of wood — longitudinal and transverse sets, plywood paneling with inner and outer sides followed by pasting fabric on epoxy resin and is laminated on the “jackass” of fiberglass on epoxy or polyester resin. If You are interested in fishing, the feeder can watch here.
The articulation is the back of the scooter with the front axle of the sidecar is, in fact, the only complex operation. Manufacturer of cabin tricycle, although it will be quite time-consuming stage of construction, requires no special skills. The implementation of the hood for the power unit of the tricycle — operation, in General, equivalent to the previous one. However, if you were to convert autoroller, as the casing you can use the rear part of his body almost without alteration.
I. EVSTRATOV, engineer