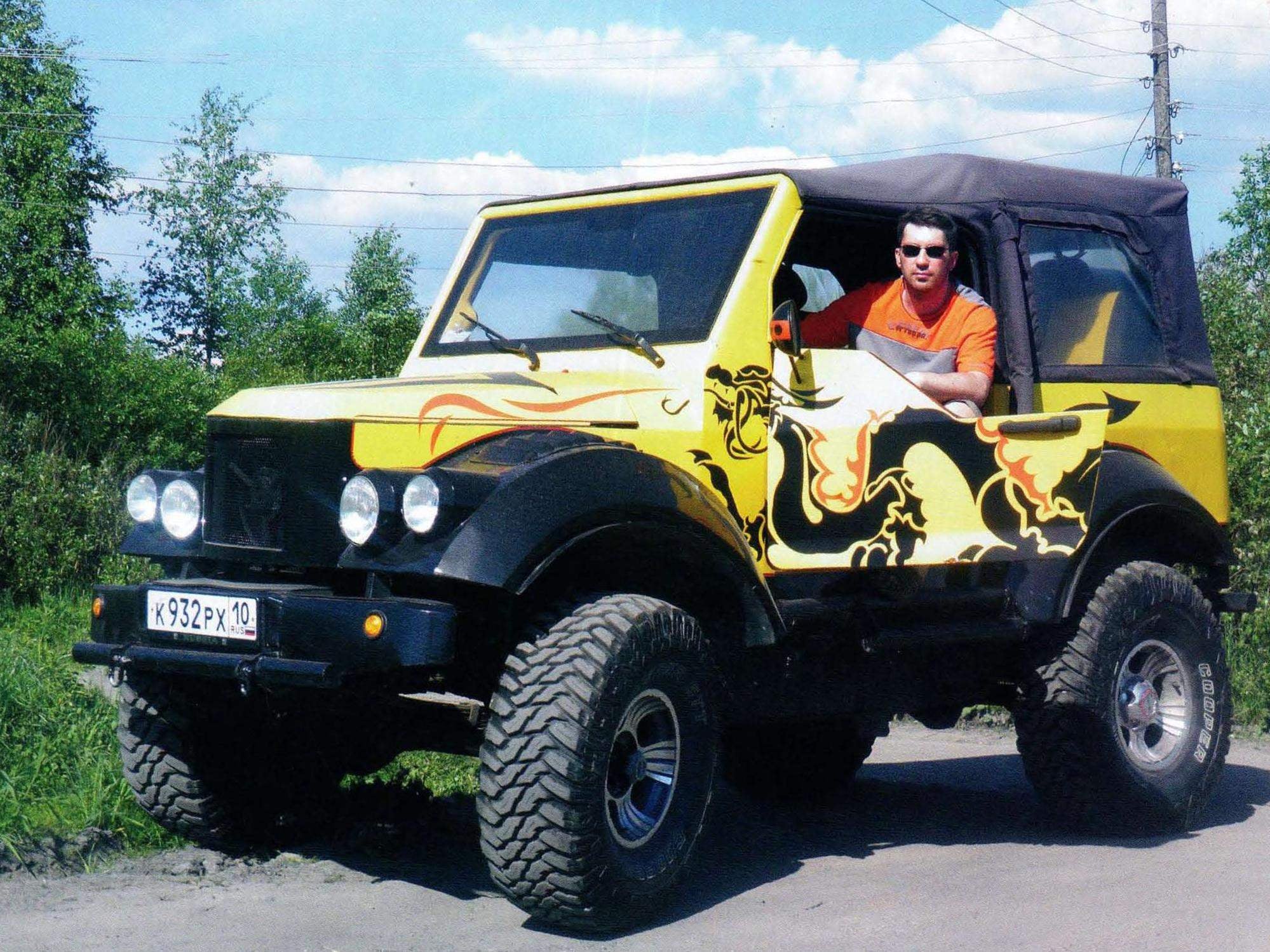 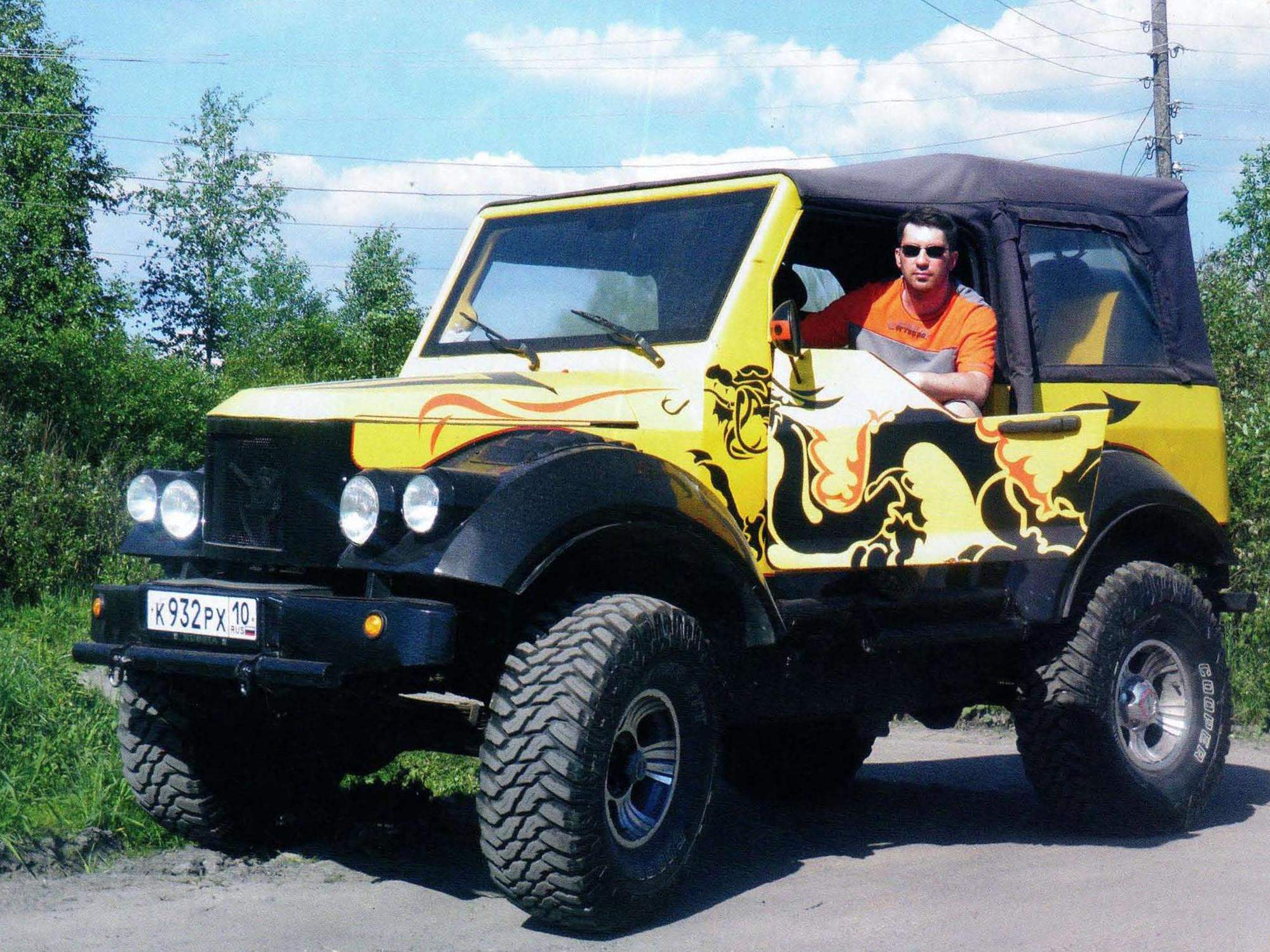 The idea of building this car because I and my household are very fond of active rest and travel to native places. And not only where there are roads, and often where they are not. The basis was taken of the legendary Soviet car GAZ-69, but rather the UAZ-69 – the car was designed in Gorky (now – Nizhny Novgorod), but there was manufactured a short time, and then its production was transferred to Ulyanovsk. Machine release in 1969 was purchased by me in 1983. But trains on her for a few years, I realized that the car does not meet modern requirements, and therefore decided to upgrade it!
In the beginning was the idea: to replace the motor is more powerful and interior is equip with comfortable seats and stop there. But he had only to get down to business – and by mess, screw it.
It was planned that the new car will have to overcome not only the “steep” terrain, but a decent distance. According to my ideas, the new car had to have good throughput, reliability, be easy to operate and repair, comfortable, and, of course, original. But because the work began with sketches and drawings which delineated the design (its appearance) and even the name – “ginger”. Drawing with a computer program project “future machine” – took over!
And I must say, over the “69th” had to work hard. But first he was almost dismantled to the last bolt, went through the axles and transfer case, so that later there no more to climb, replaced all bearings and seals main transmission and axles.
The frame is primarily cleared from rust. It remade the mounting brackets of the engine, shifted back mounting crossmember transfer case (RC), set the dampers from Oise (instead of standard lever), have replaced many brake parts (pads, brake master and wheel cylinders, pipes), trevisiol remaining. All rubber seals were replaced with polyurethane. Installed new fuel and exhaust system mounted electric motor. 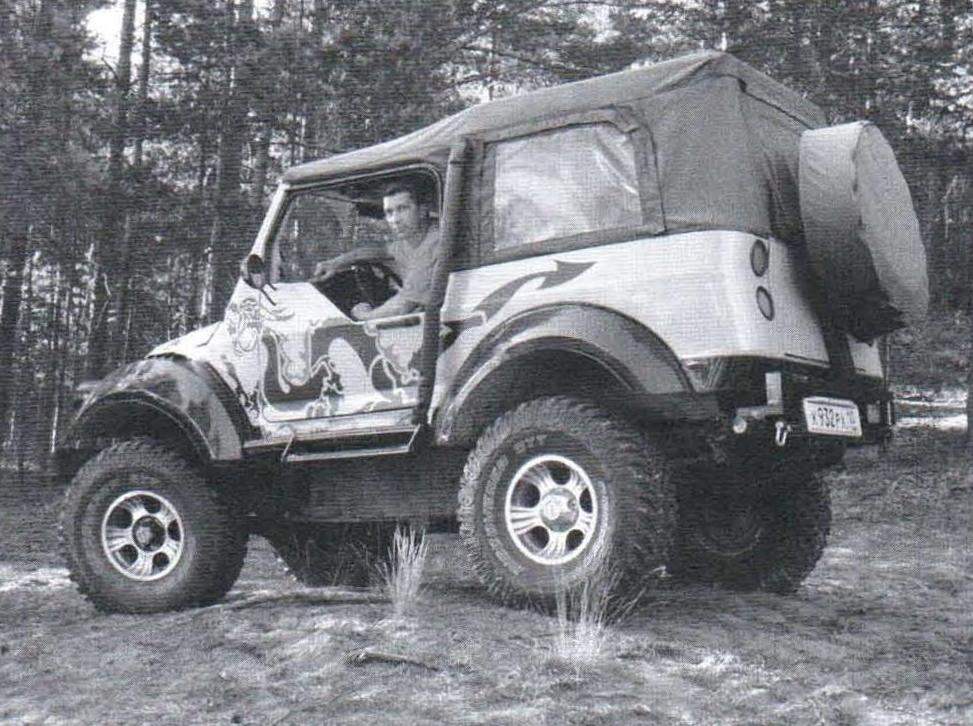 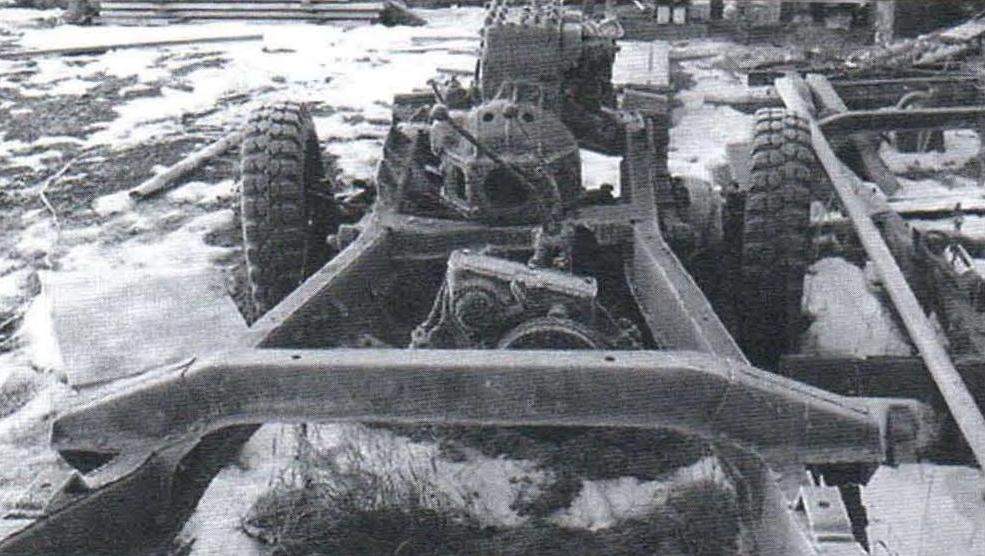 How it all began: from the UAZ-69 was used the frame, axles and transfer box
Regular engine was replaced by a ZMZ-402 displacement of 2.7 liters and power 100 HP – it is unpretentious (runs on gasoline AI-92), quite reliable and has good traction at low revs. The motor was not new, but serviceable (it was possible to buy a more powerful “406 y”, but it the maximum torque you have at higher rpm than the “402-go”). Initially there were problems with large consumption of fuel. To reduce the “appetite” of the motor, installed a better carb “Solex”. The engine became easier to start in any weather, decreased fuel consumption, improved thrust at low engine speeds. Instead of two regular tanks installed a new one with a capacity of 75 liters under the sofa rear passengers.
Just picked up and more effective work tools: a powerful generator – from Audi, the pump Gur from “Ford Transit”, the cooling fan from the GAZ-3110. The clutch mechanism and the box changes gear (transmission) set from GAZ-3102.
The motor does not fit under the hood “of ‘ 69” and its support is also not the same. Had to make new brackets for engine mounting to the frame and move it back to 150 mm. It is “pulled” for a change in appearance of the machine. For optimal operating conditions of the engine mounted blower motor from the “Volga” GAZ-3110 and mounted louvers-vents on the front wings, which are connected to the engine compartment and pull the heated air. 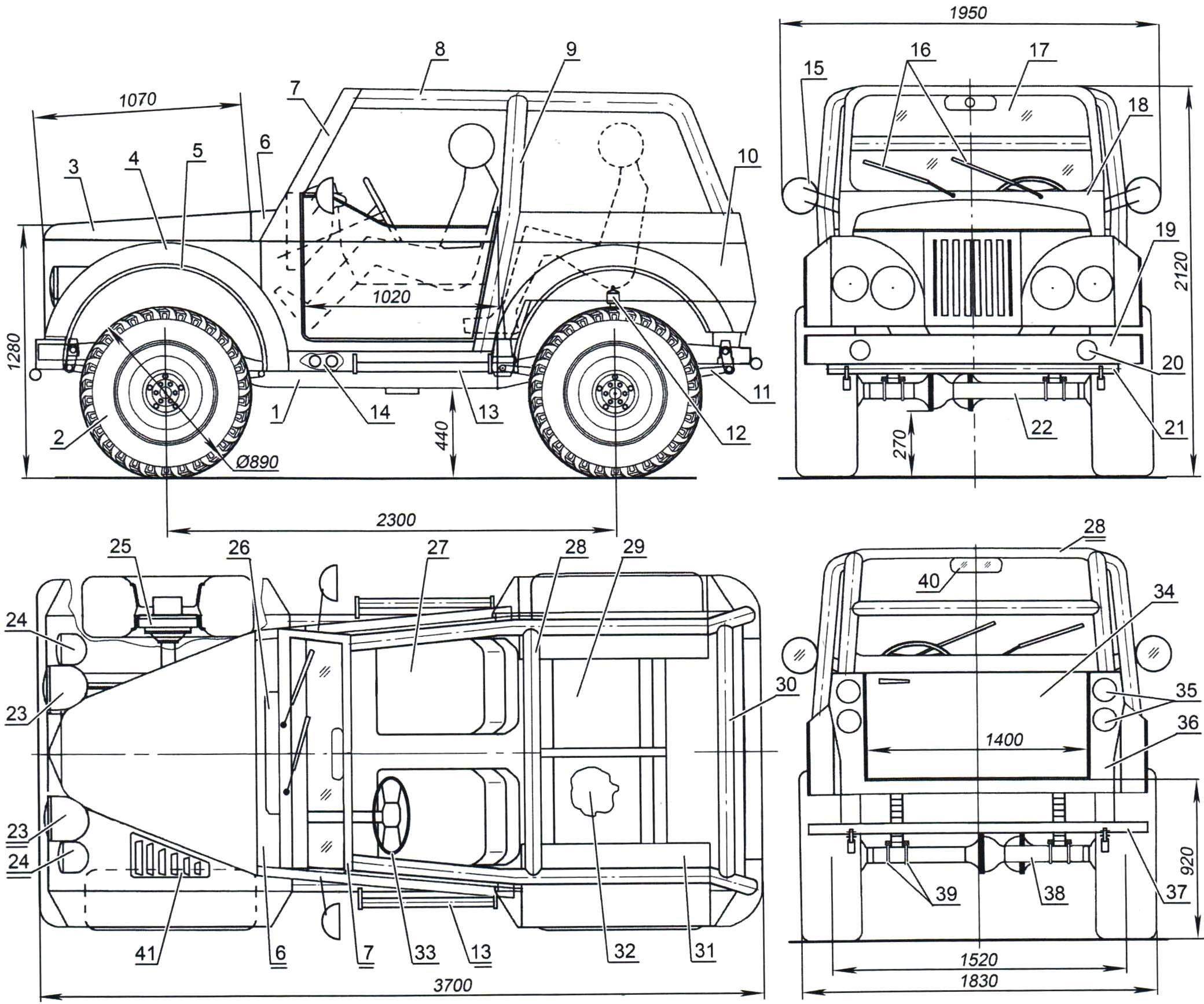 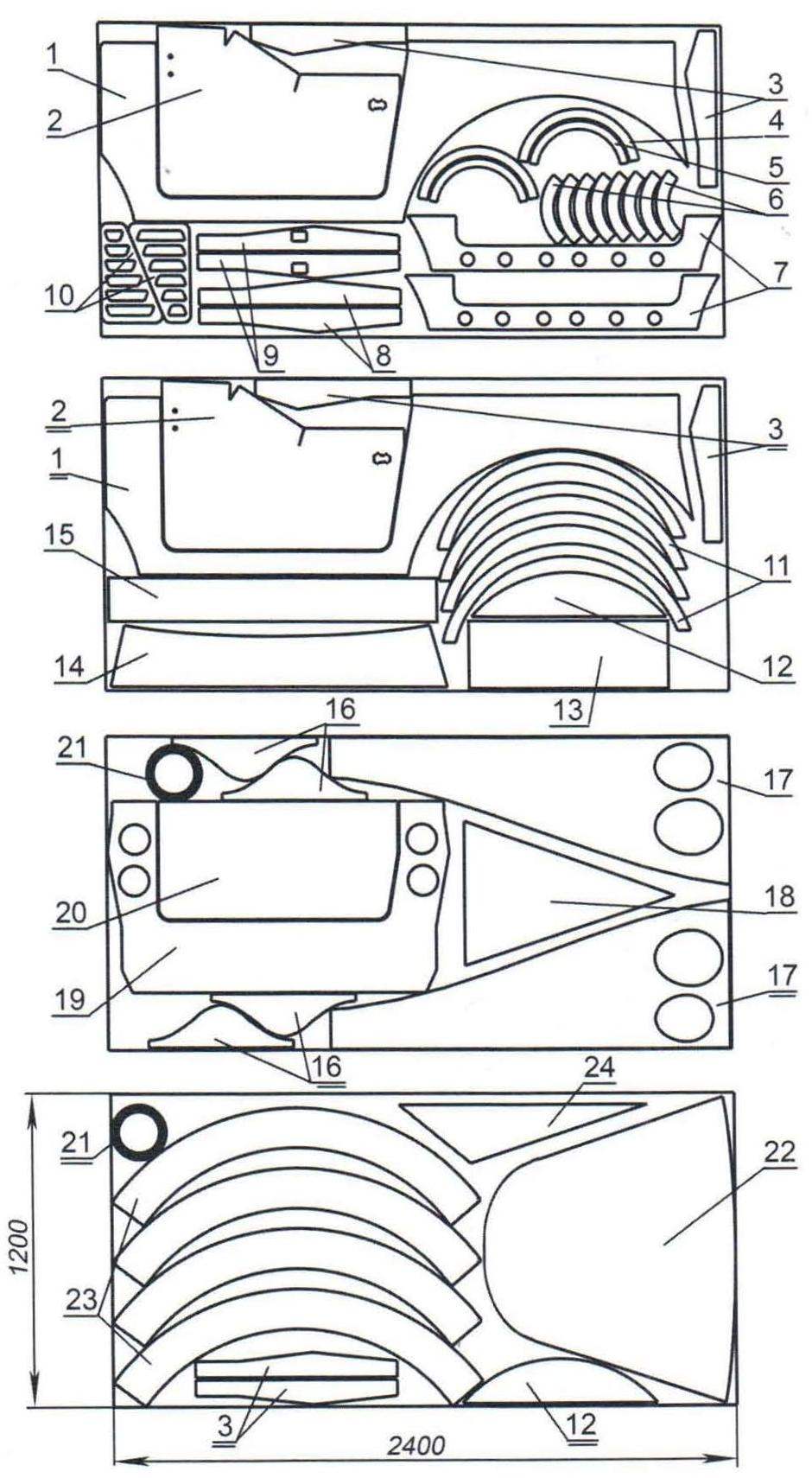 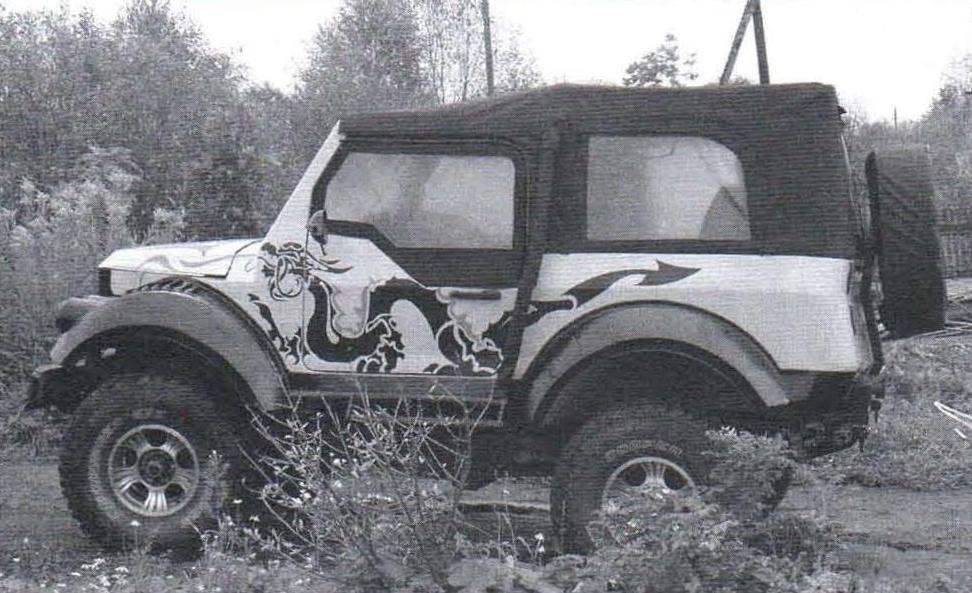 Jeep “ginger” under the awning and a spare tire 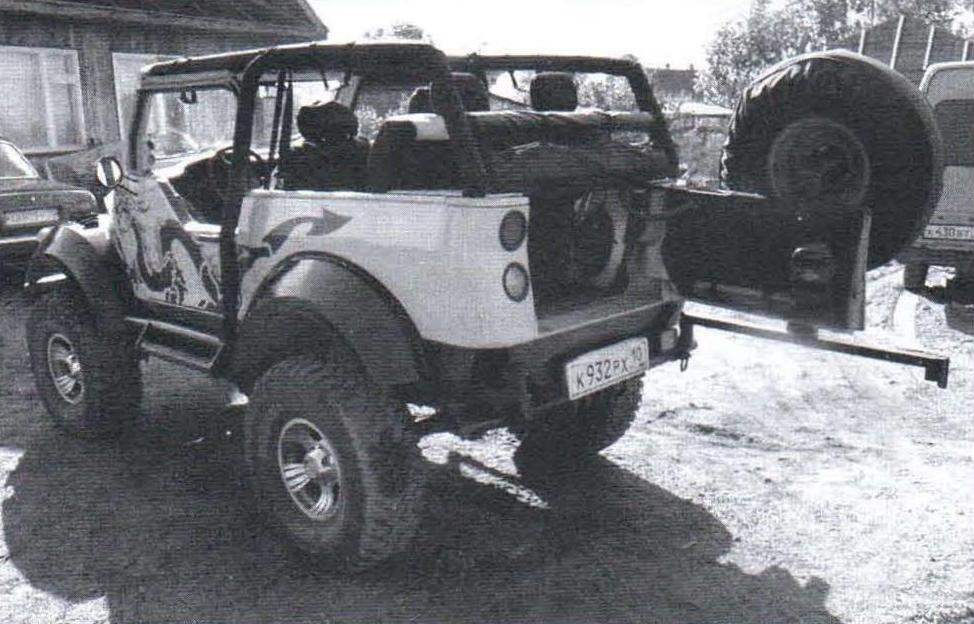 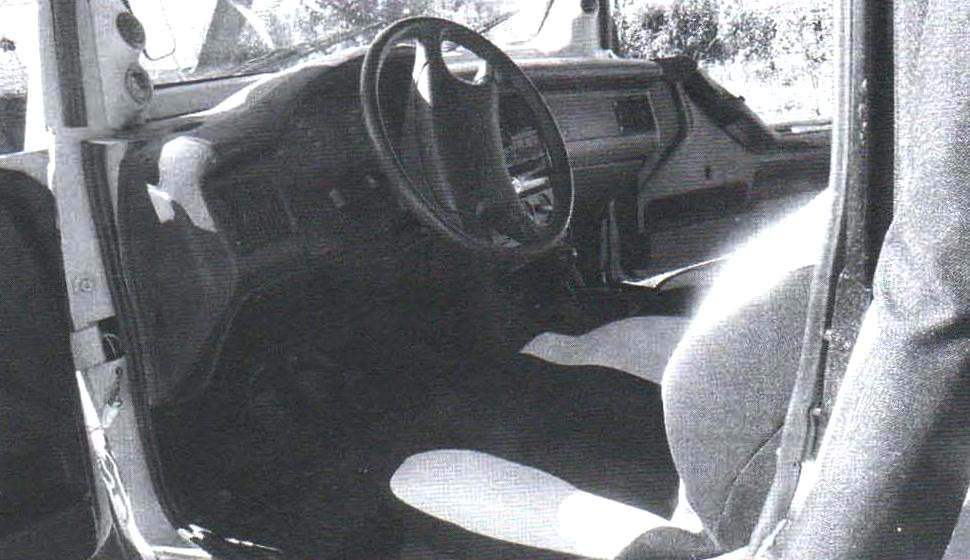 The driver with the dashboard, steering wheel and seat from the car “Audi-80” 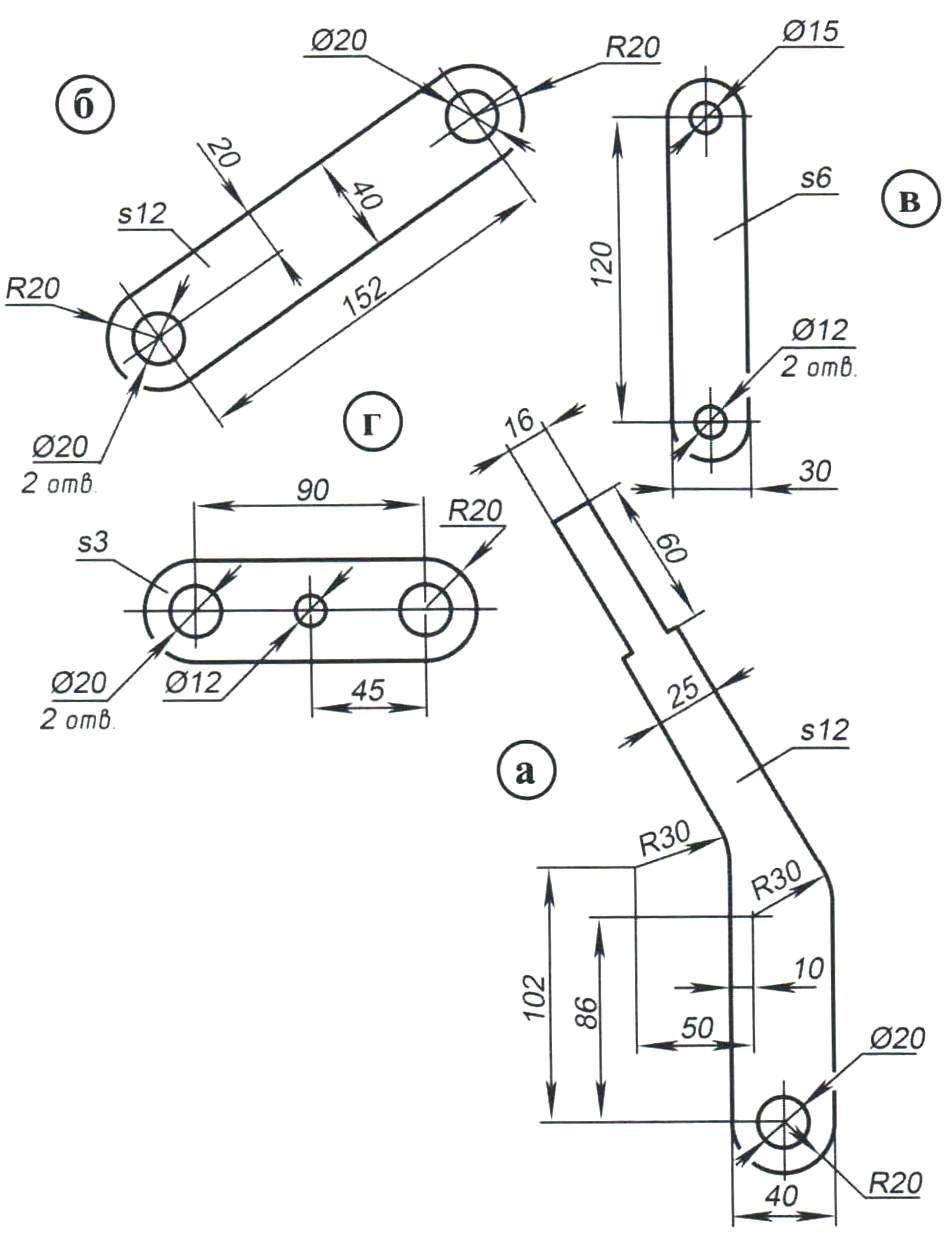 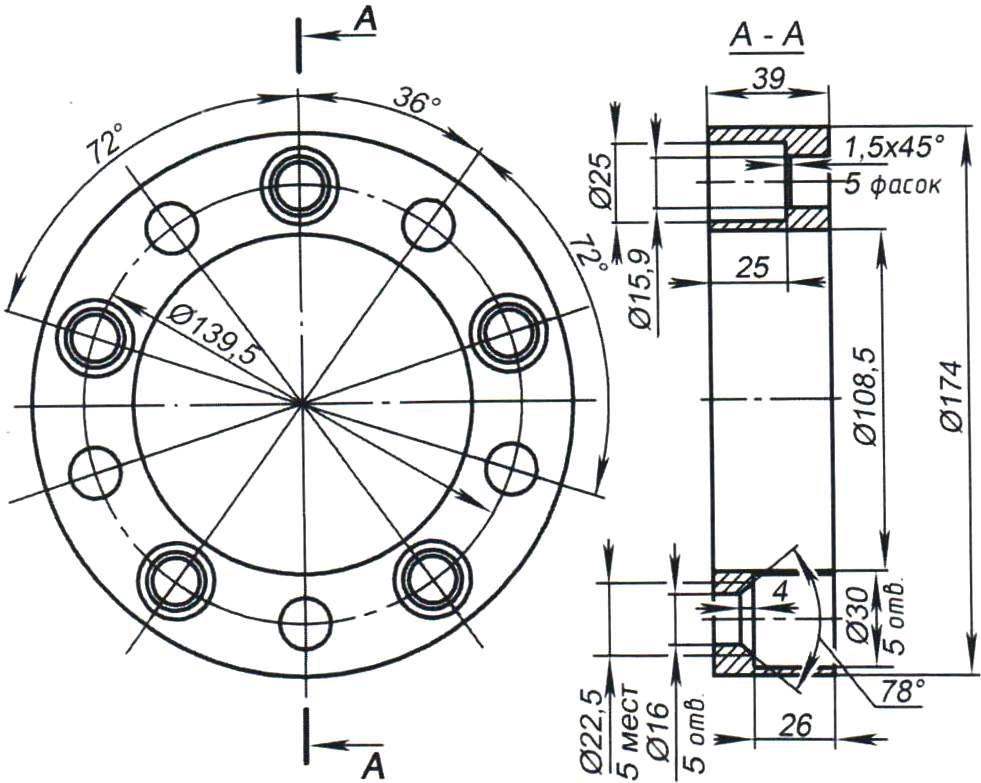 Wheel spacer between the brake drum and the wheel disk (4 PCs.)
Unit rotary crosshead (“gate”) the spare wheel on the amplifier rear bumper:
1 – reinforcement of the rear bumper (steel pipe d62x2,5); 2 – bracket (2 pieces, see drawing amplifier rear bumper); 3 – pad (2 PCs., see drawing amplifier rear bumper); 4 – supporting strut (steel pipe 40×40); 5 – cross arm (channel No. 6); 6 – handle (steel pipe 20×20); 7 – bushing joint (steel pipe d30x2); 8 — shaped Central strut (steel tube 60×30); 9 – washer of fastening of a spare wheel (steel sheet s6); 10 – axle hinge pin
Due to the installation of new and longer transmission from the car “Volga” GAZ-З102 had to move the regular transfer case (RC) closer to the rear axle and even change its angle of inclination. This led to the alteration of all universal joints: interim and bridge. Cardan rear axle is pretty short, as a result of increased angles work frogs. To mitigate the interference between the bridge and the spring mounted corner spacers. The front propshaft had to step up. Intermediate cardan shaft was made of a composite: one part (the one closer to the CAT) – from the cardan shaft GAZ-3102, and the other (“handout”) -GAZ-69 with transition the puck between them.
That machine was easier to manage (or rather, almost not to impact the steering wheel in rectilinear motion), I changed the “Castres” – the angle of inclination of the axis of the pivot (or axis between the centers of the ball joints the knuckle in modern cars) to the vertical by drilling other holes for fastening the steering knuckle to the stocking of the bridge. Between them now put the spacer turned on a lathe. Installed the steering damper. To increase the stability of the expanded track. And to have not strain much and leg – mounted vacuum brake booster (WCF) from Audi.
Due to the reconfiguration of the machine (moving units) weight distribution became more evenly than the “69”. Not to shift back control arms RK from their usual place between them had to do the scenes. RK left the staff, as it has the largest gear ratio in low gear, which is important offroad. All rubber products suspension was replaced with polyurethane. Changed as Castres and installed a rubber with a diameter of inches running 35 “Cooper discovery STT” increased stress during rotation of the steering wheel. “Cured” is installing the power steering (Gur) from BMW E36, it is optimally suited to GAZ-69. However, I had to change the shape of the Pitman arm of the steering shaft in the forge and mount the adapter plate to the frame of the WTP and strengthen the latter, well, to make the adapter hoses under the pump from “Ford” to the Guru from BMW. Also installed the steering damper. Fuel tank 80 liters -homemade, made from sheet steel and is mounted under the sofa rear passengers. Brake system dual circuit, with vacuum booster from an Audi. Since the machine is quite high – increased track due to wheels with negative departure (- 20 mm) and the annular spacers 40 mm thick between the brake drum and the wheel disk. Front axle mounted mechanical hubs. Lever shock absorbers were removed and in their place welded brackets shock absorbers from the UAZ-469. Machine to adequately behave on the road, put gas-oil shock absorbers “Plaza” from the UAZ-469. The wheel (from Audi) with Gur coupled through two drive shafts in the bearing intermediate support.
When the preparatory work was done -took up the body.
As mentioned previously the car wanted to make an original and at the same time recognizable, so to speak, the current vision of the old GAZ-69. So how to alter regular body conceived modernized way had no meaning, I decided to make a completely new body. For him it took steel sheets with a thickness of 1.2 mm and 2 mm. “Deuce” – on the floor, a 1.2 mm – for all other body parts. And long winter evenings “now”: cut, bent, squeezed. The body is welded in two months. Then came the coating, preparation for painting and painting itself. As it is all done – I remember like a nightmare, but when everything was installed at the place turned out to be quite good.
The GAZ-69 is a very narrow side door (while driving especially), so for the convenience of landing both doors were enlarged and hanging on a front body pillar on the bearing “monopole”, the door locks are electrically operated. Torpedo and tunnel – “Audi 80”, front seats – “Audi A8” with electric drive of change of position, rear sofa – “Mitsubishi-Pajero”. Also installed a powerful heater from Audi, now even in severe frosts in the car warm. All wiring is also taken from Audi. Large front headlight (high beam) – GAZ-69, small (low beam) – VAZ-2106. Signal lights, “blinkers” and marker lights from an American truck “inter”. In the back of the body, in the floor, made in the recess. At first was stored in the spare wheel, and then – tent (made only a year). In the side compartments of the stored tool. Tent – material “Oxford”, insulated — lined on the inside with jacquard fabric. Floor is covered with automotive carpet. But even for the comfort of the driver and passengers with powerful stove from Audi – now and in the winter, the cabin warm! 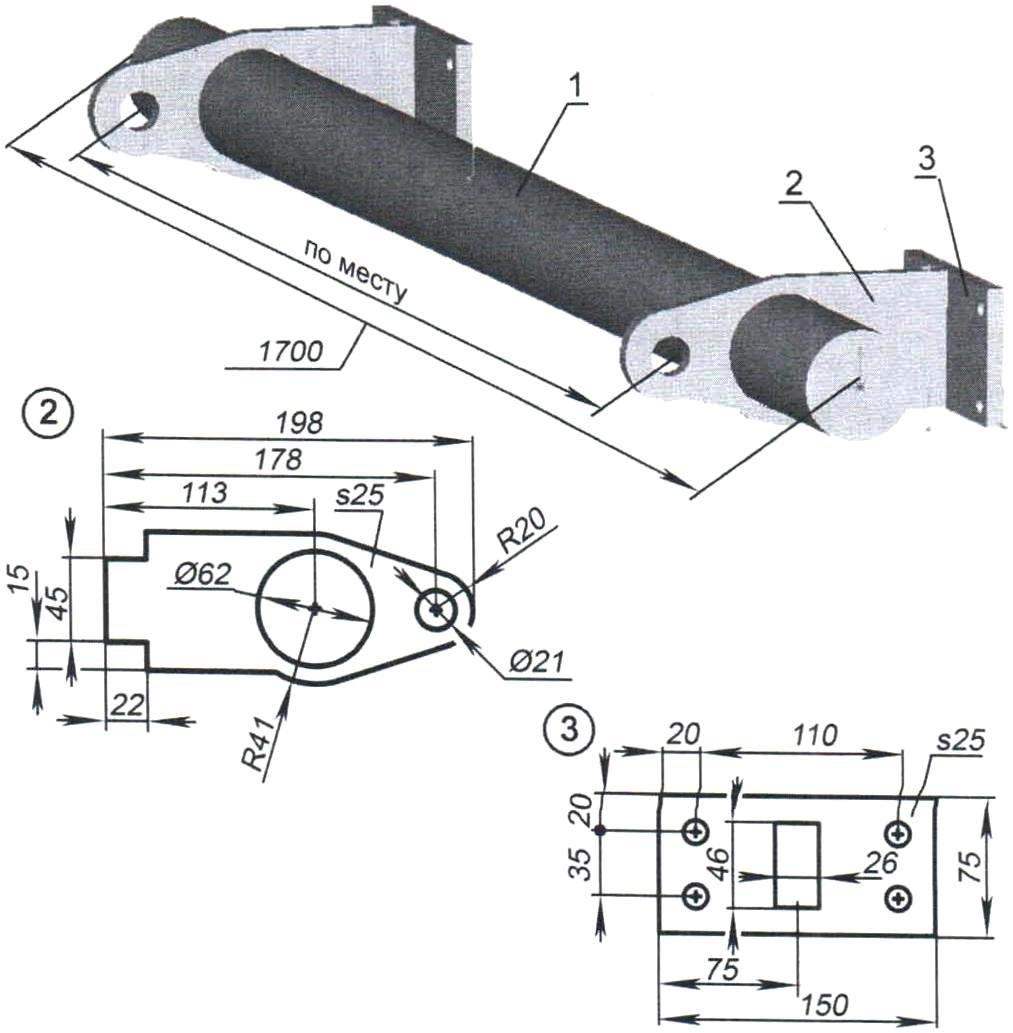 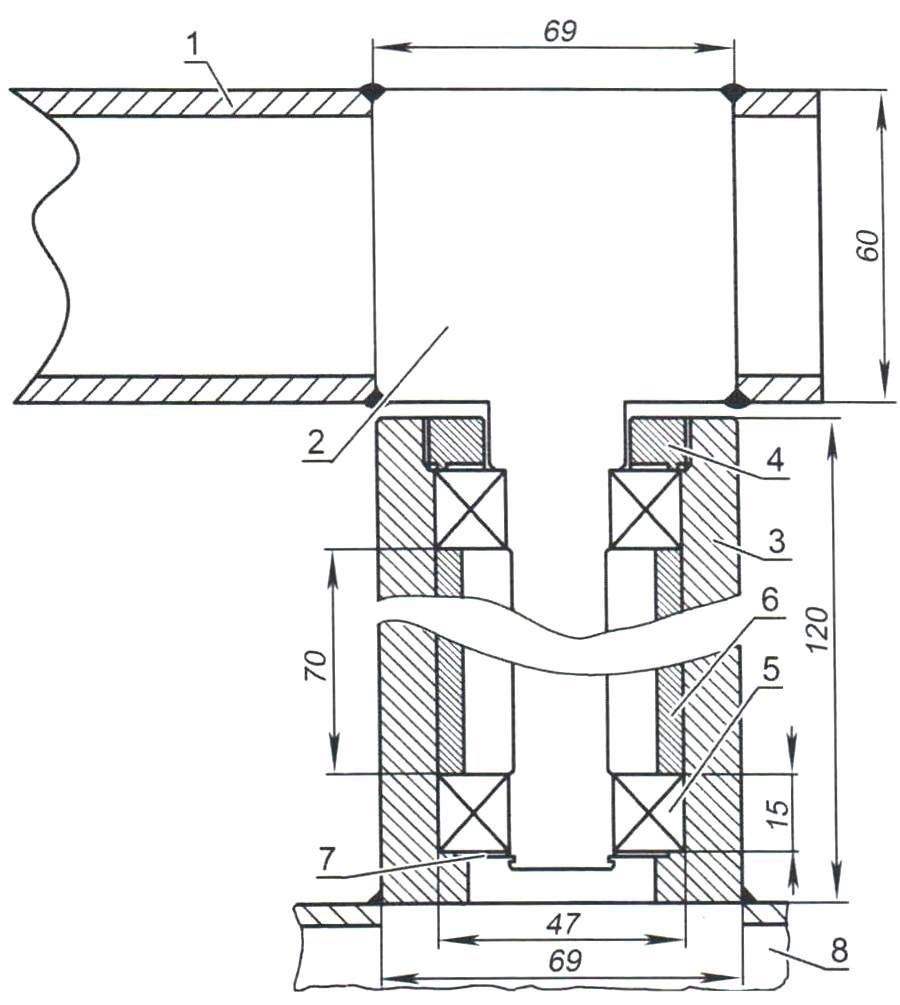 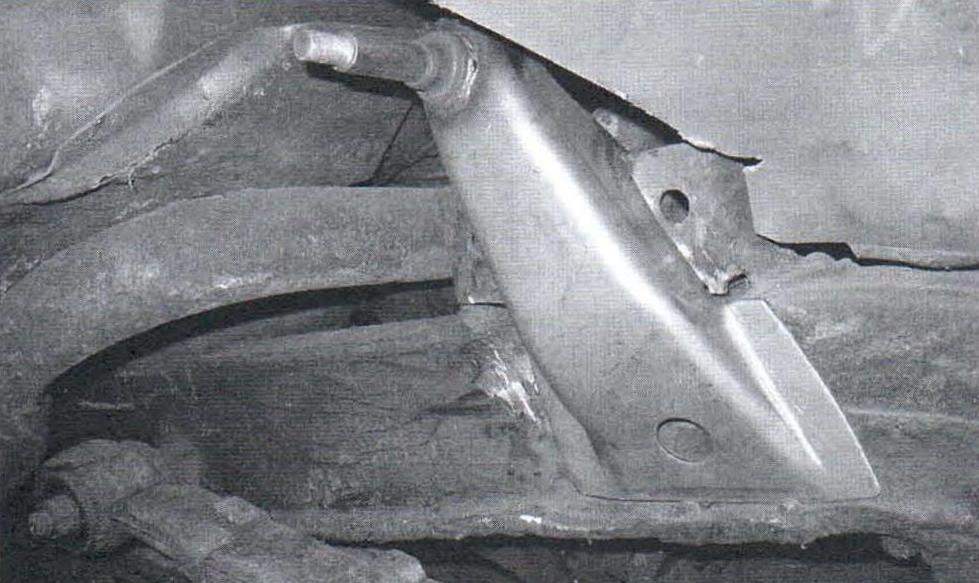 New bracket from UAZ-469, welded to the old frame of the UAZ-69 to absorber Plaza
Back door – also expandable, are suspended on bearing “monopati” electric castle. For the spare wheel produced a “gate” (turning the console) with the castle, here also hung a pouch for bait.
The rear door mounted amplifier low frequency power of 1 kW. Also made good audiopreparation. Installed head unit mp3 with USB, 4-channel 2-component speaker system midbass -4, 4 tweeters on the catwalks on the side of the body and a subwoofer with bass reflex. Windscreen (laminated), custom made in Saint-Petersburg and glued to the frame.
Safety frame, consisting of uprights, longitudinal members and cross members made of pipe outer diameter of 50 mm. Pipe frame covered with artificial skin. Installed reinforced bumpers and sills; pan of the engine, the bottom of the fuel tank and the muffler is equipped with a protection made of sheet steel 2 mm thick.
The construction of the car is finished in December 2010, the Car was comfortable and very passable. Thanks to the motor which pulls very well at lower levels, are almost like the machine (you don’t have to pull the “stick” change gear). Successful and suspension – for the broken primer is like on asphalt.
All design changes made to the vehicle passport (PTS).
Now often asked to carry the wedding, just to be photographed next to a car or drive one. But mostly the car is used for its intended purpose – travel and stay active!
Yu MÄKI, s o l o n e C, Karelia