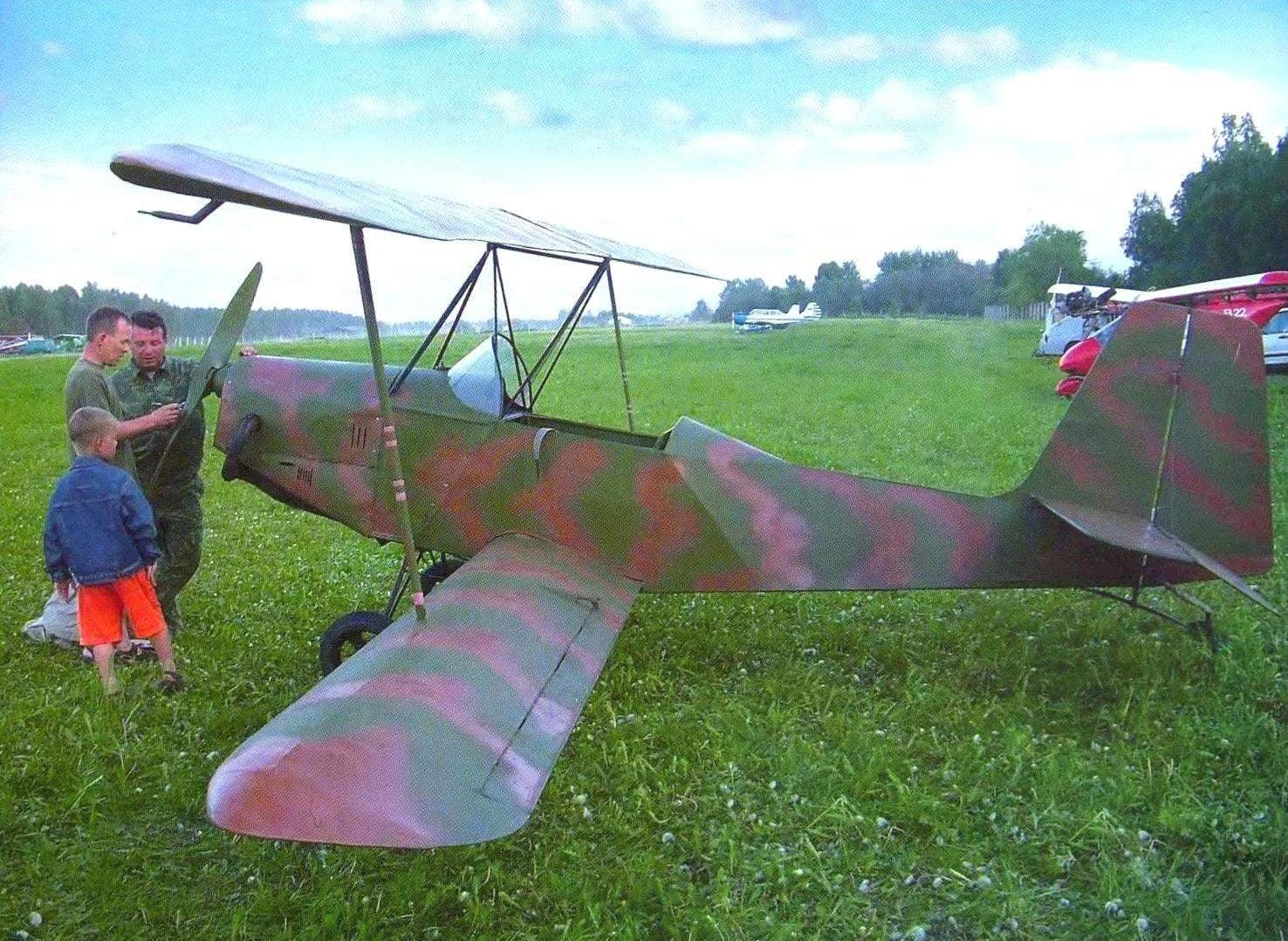 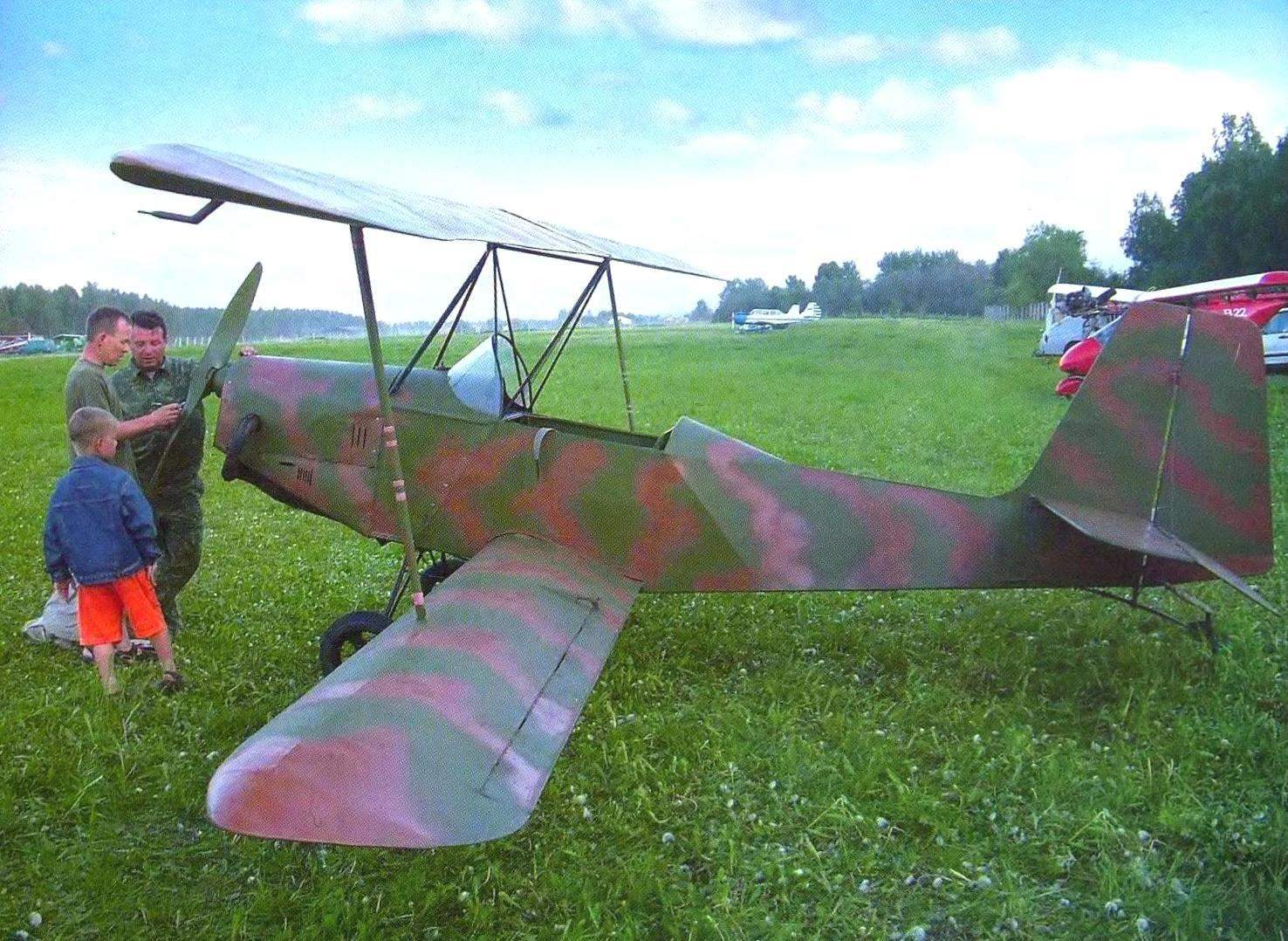 Build your plane — it was my dream since childhood. However, to implement it I was able not too long ago, although the way to heaven paved in military aviation, and then — on deltaluca. Then built the plane. But the lack of experience and knowledge in this matter and gave the result — the plane never took off. Failure is not something to discourage the desire to build aircraft, but cooled the ardor thoroughly — it was a lot of wasted time and effort. And to revive this desire helped, in General case, when the opportunity came up to purchase some inexpensive parts from decommissioned aircraft An-2, known more popularly under the name “Maize”.

And purchased something only the ailerons with trim tabs and flaps. But have been you can make wings for light aircraft-biplane. Well the wing is almost polsamoleta! Why did you decide to build a biplane? Yes, because the area of the ailerons for the monoplane was not enough. But for the biplane — was enough, and the wings of An Aileron-2, even a little shortened. The ailerons are only on the lower wing. They are made of twin trimmers ailerons of the aircraft An-2 and suspended from a wing on a conventional piano hinges. To improve the efficiency of control of the aircraft along the trailing edge of the ailerons on top of glued wood (pine) triangle rails with a height of 10 mm and covered with strips of fabric sheathing.

The plane was conceived as an educational-training, classified as ultralight vehicles (UltraLite).
By design, the aircraft is a single single-strut biplane with a tricycle landing gear with steerable tail wheel. To pick up some prototype failed, and therefore decided to design and build according to the classical scheme and, as they say motorists, without additional options, that is, in the simplest version with an open cockpit. 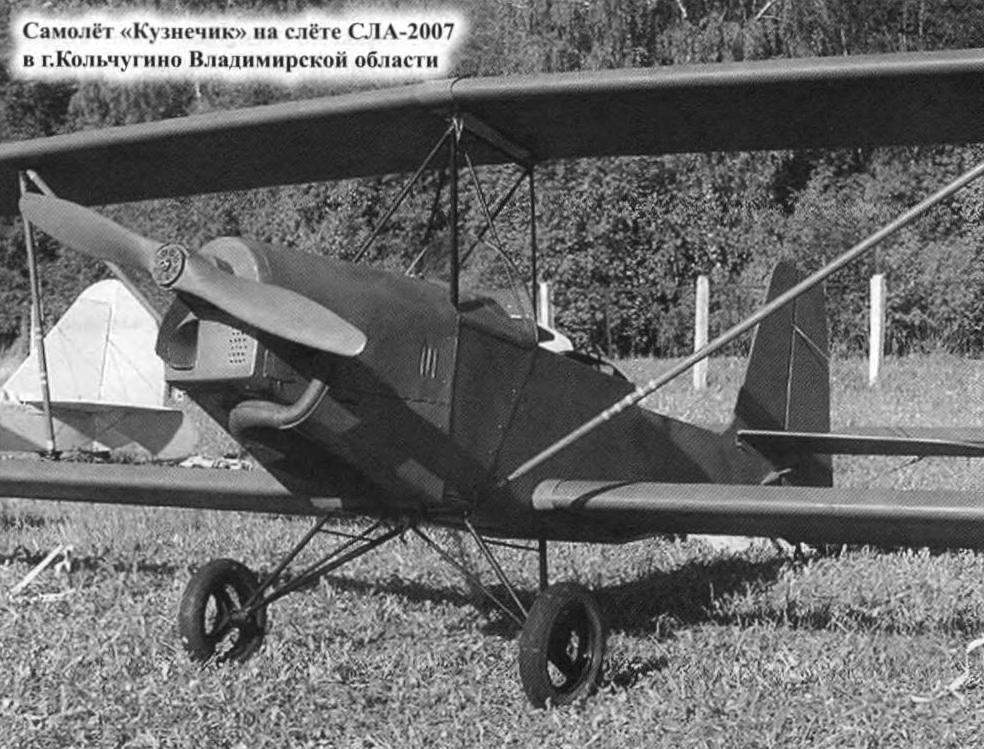 The top wing “Grasshopper” is raised above the fuselage (parasol) and fixed just ahead of the cockpit on a support made of duralumin tubes (rods from the ailerons An-2) in the form of a sloping pyramid. Wing — separable, consists of two consoles, the junction between which is covered by the overlay. A set of wing — metal (duralumin), lining — plain finish emelita. The tip and root parts of the wings are also trimmed with thin dural sheet. Console upper wing is additionally supported by struts extending from attachment points micrylium struts to the lower longerons of the fuselage. The air receiver pressure is fixed at a distance of 650 mm from the end of the left cantilever of the upper wing. Console lower wings are also detachable, is attached to the lower longerons of the fuselage (at the sides). The gaps between the root portion and the fuselage are covered with linen (soaked Amalita) samisami, which are attached to consoles on the sticky tapes of the brambles.
The mounting angle of the upper wing is 2 degrees , the bottom is 0. Cross V top wing — 0, and the bottom one is 2 degrees. The sweep angle at the top of the wing is 4 degrees and lower 5 degrees.
Upper and lower console of each wing are connected by struts, done like the struts are of duralumin tubes from rods control aircraft An-2.
The frame of the fuselage — truss, welded of steel thin-walled (1.2 mm) pipe outer diameter 18 mm. It is based on four spar: two upper and two lower. On the sides of the pair of spars (one upper and one lower) are connected by an equal number and equally spaced uprights and struts and form two symmetrical farm. A pair of upper and lower spars are connected by crossbars and yoshikami, but their number and location at the top and bottom often do not match. Where the location of the crossbars and the uprights match, they form a frame. On top of the front rectangular frame welded of the forming arc. The remaining (rear) fuselage frame — triangular, isosceles. 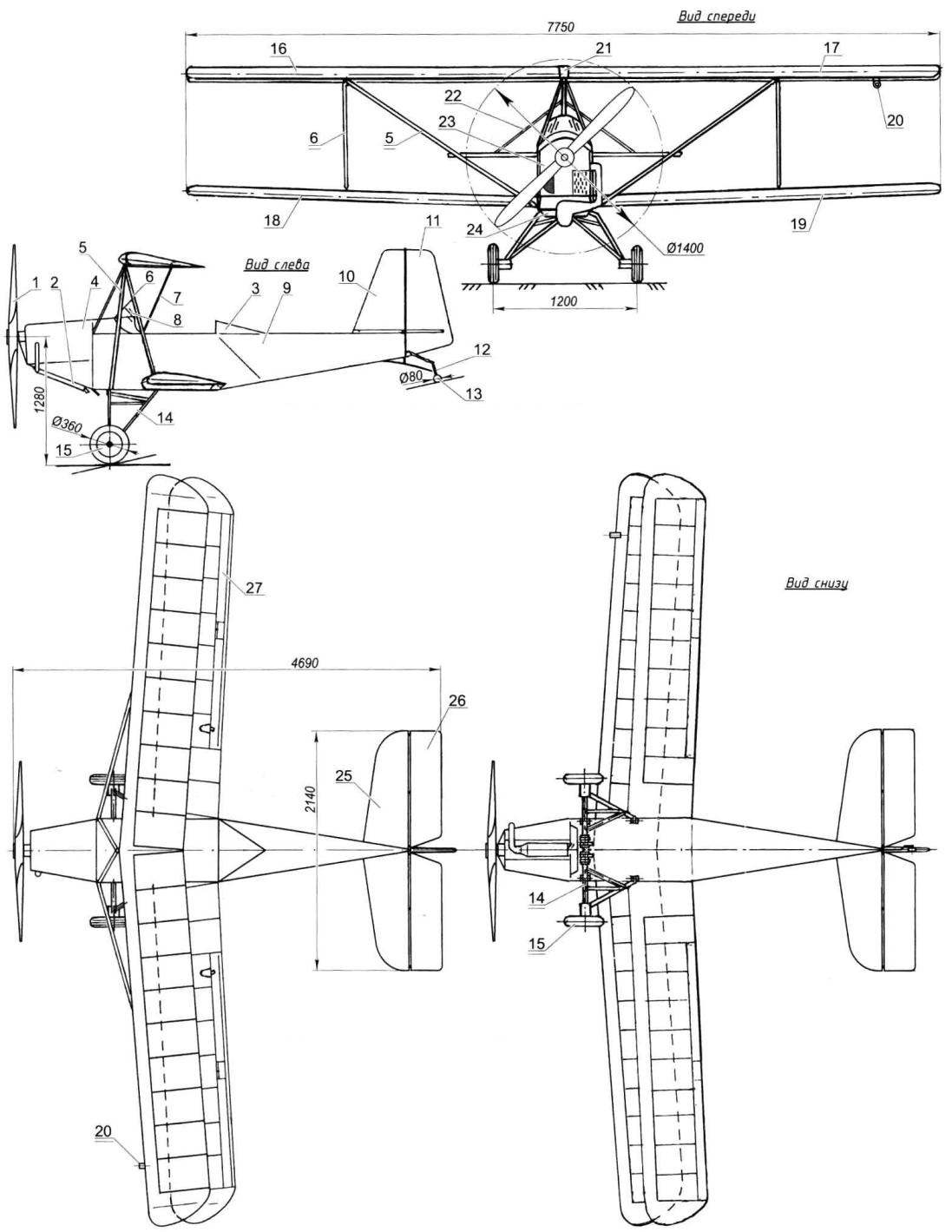 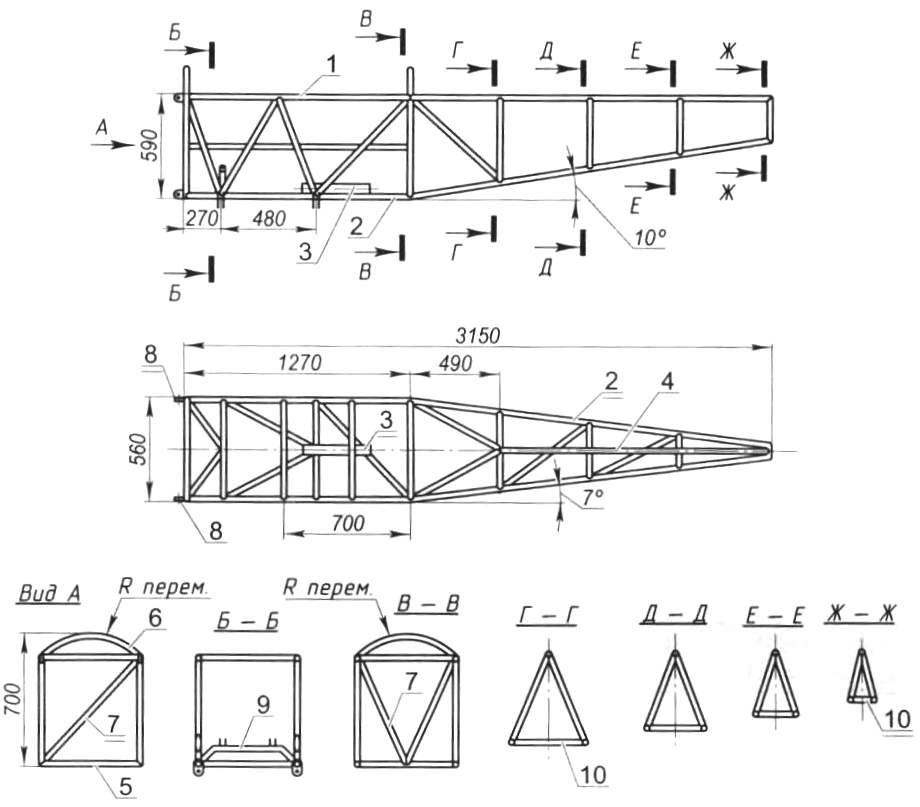 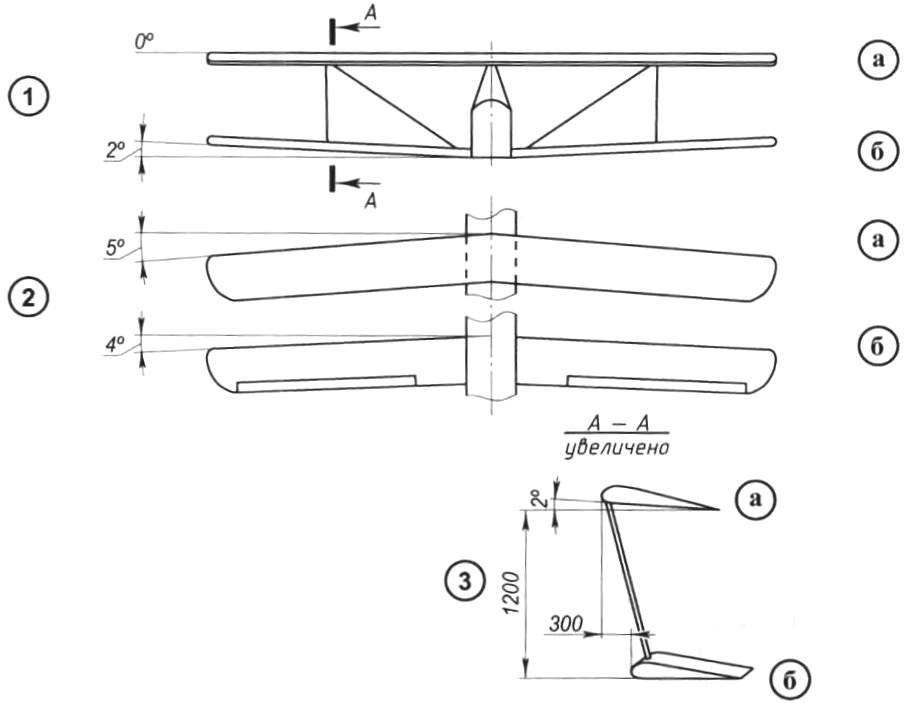 The angles of setting the wing panel (a — upper wing, b — lower wing):
1—cross-V; 2 — swept wing; 3—angle
Frame covered with unbleached calico, which was then impregnated with “Amalita” home — made celluloid dissolved in acetone. This cover is well established among Amateur aircraft designers. The front part of the fuselage (or cabin) on the left on the flight side panelling and slim plastic. Panel — removable — for easy access on the ground to controls in the cockpit and under the engine. The bottom of the fuselage is of duralumin sheet thickness of 1 mm.
The tail unit of the plane is classic. All items are flat. Frames, keel, stabilizer, rudders and height of the welded thin-walled steel pipes with a diameter of 16 mm. the Fabric covering to the parts of the frame are sewn and taped seams optional strips of the same coarse calico impregnated with Amalita tissue. The stabilizer consists of two halves that are attached to the keel. To this end, over the fuselage via the keel near the front edge of missing the stud of the M10, and the rear edge of the — tubular shaft with a diameter of 14 mm To the root the terminals of the halves of the stabilizer welded lugs with shaped grooves for installation of the horizontal tail at the required angle dependent on the mass of the pilot.
Each half fits over the lug on the stud and tighten the nut, and tube the rear edge of the — axis and is attracted to the keel by a brace made of steel wire with a diameter of 4 mm.
From the editor. To exclude inadvertent rotation of the stabilizer in flight is appropriate sectorial groove in the ears perform a few holes for the pin.
Now the plane is propeller driven installation engine the Ufa engine plant UMZ 440-02 (such motors plant complements snowmobiles “Lynx”) with a planetary gearbox and two-bladed propeller. The engine capacity of 431 cm3 40 HP with speeds up to 6,000 per minute air-cooled, two-cylinder, two-stroke, with separate lubrication, running on gasoline, starting with AI-76. Carb — К68Р. Air cooling system — although homemade, but effective. Done in the same way as aircraft engine “Walter Minor”: with the intake in the form of a truncated cone and baffles on the cylinders. 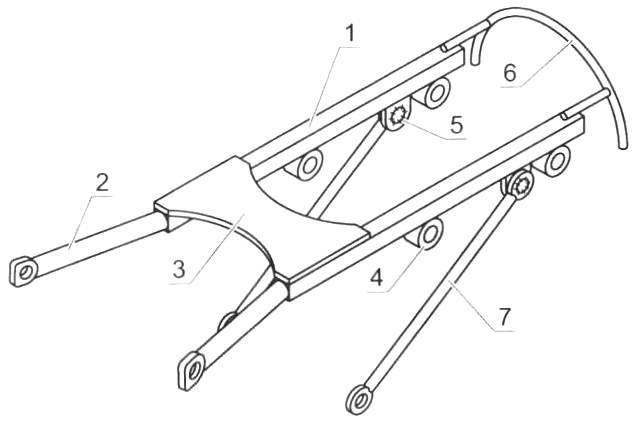 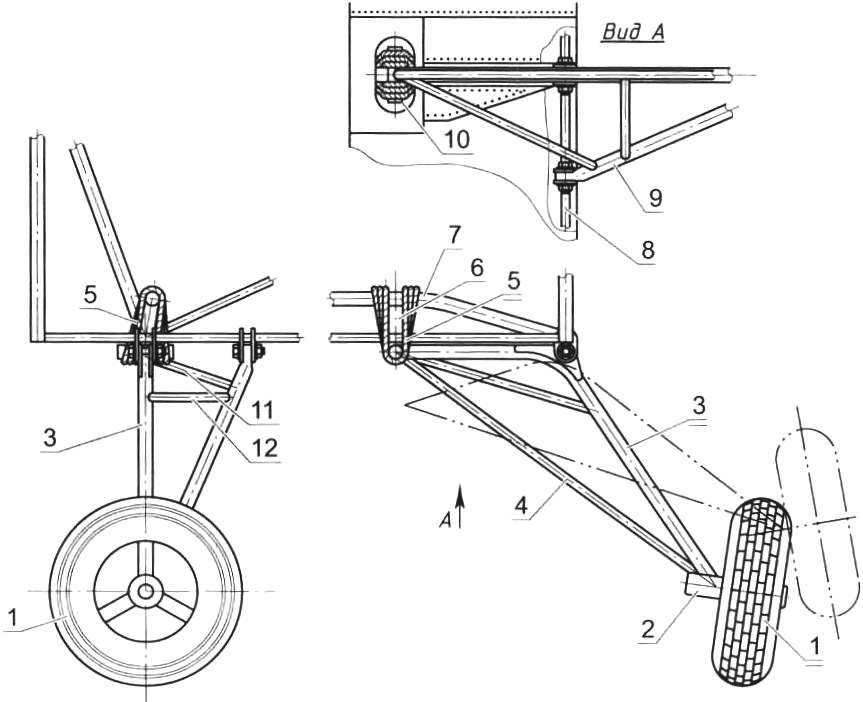 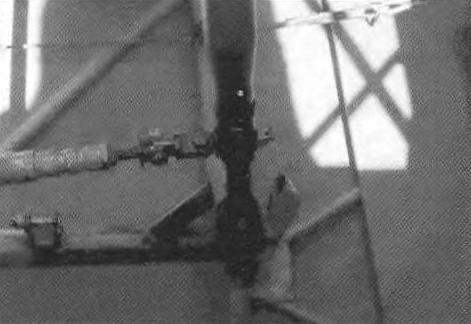 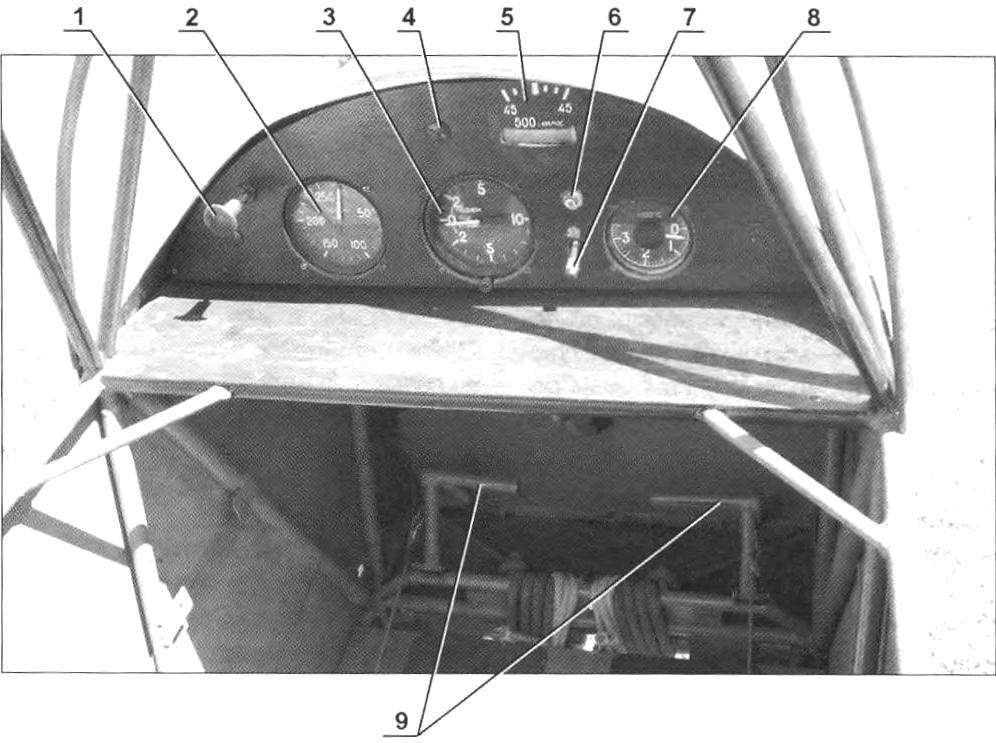 The dashboard (clearly visible at the bottom of the pedals control the rudder and tail wheel on the trapeze and rubber recoil absorber of the main landing gear):
1 — handle throttle control of the carburetor; 2—pointer horizontal velocity; 3 — variometer; 4—the screw of fastening of a dashboard (3 PCs); 5—indicator turn and slip; 6—light alarm of engine failure; 7—toggle switch ignition; 8—temperature sensor of the cylinder heads; 9 — pedal control rudder
Earlier aircraft was the upgraded engine from outboard motor “Whirlwind” with a capacity of only 30 HP and a V-belt transmission (ratio of 2.5). But with them the plane was flying steadily. But pull two-blade monoblock (pine parklea) makeshift screw with a diameter of 1400 mm and a step of 800 mm has not been changed, though I plan to replace it more appropriate. Planetary gear reducer with a gear ratio of 2.22… new engine got from some cars. The muffler for the engine is made from two-gallon container of foam fire extinguisher. Also the fuel tank capacity of 17 litres — from the tank to the old washing machine — it is made of stainless steel. Installed behind the instrument panel. The hood is from sheet aluminum. It is on the sides of the grille for output hot air to the right and another access hole with a cover for the withdrawal of the cord with grip — they are starting.
Rotor installation suspended on a simple Motorama two consoles with the struts, the rear ends of which are fixed to the uprights of the front frame-the frame frame of the fuselage.

The engine UMZ 440-02 from snowmobile “Rys” fits the contours of the fuselage and provided good plane flight data
Electric aircraft — 12-volt.
The main landing gear are welded from lengths of steel pipe with a diameter of 30 mm, and their struts from tubes with a diameter of 22 mm. Shock — rubber cord wound on the front of the pipe racks and the trapezium of the frame of the fuselage. Wheel main landing gear — a non-braking with a diameter of 360 mm from the mini-mokiki, they have a reinforced hub.
Back support is the shock absorber spring type and the driven wheel diameter of 80 mm (from the aircraft ladder).
Control ailerons and Elevator — tight, from the handle control of the aircraft through the thrust of duralumin tubes; rudder and tail wheel cable from the pedals.
The construction of the aircraft was finalized in 2004, and his experienced pilot E. V. Yakovlev. The aircraft underwent a technical Commission. Have made quite a long flight in a circle around the airfield. Fuel capacity 17 litres is enough for about an hour and a half flight, taking into account air navigation stock.
Very useful tips and advice during the construction of the aircraft gave me two Eugene: Sherstnev and Yakovlev, for which I am very grateful.
Performance characteristics
Empty weight, kg……………………………..110
Speed, kmh:
maximum…………………………………110
cruising……………………………..80-90
takeoff…………………………………………..50
landing………………………………………55
stall………………………………………45
The wing area. m:……………………………9
Engine power, HP…………………….40
Fuel capacity, l………………………………….17
The flight duration, h…………….1,5
Operational overload………+3/-3
S. SENUKOV, Ivanovo