The speed of fast motor vessels — boats, scooters and even simple boats — are growing. This is logical not only in sports but also in everyday operation of such ships, because the increased speed of some vehicles inevitably make others, at this stage, lagging, or catch up, or to go from the arena, replaced by a more reliable, fast and economical. But the growth speed on the water is not as painless a process as it might seem at first glance.
It is determined mainly by the reduction of hydrodynamic resistance and then at a certain speed the turn — transition from gliding to flying in the vicinity of the surface of the water. However, if the planing people can operate the vessel using conventional steering devices operating in the aquatic environment, the first attempt to break away from her showed that this new mode of movement requires a fundamentally different management systems, and while they are not fraught with many hidden dangers. Browse through the pages of history of the struggle for the absolute world speed record on water. While challengers to his conquest did not come off from the surface of the water, all went well. And none of the riders did not know that we are approaching the moment when the record will have to pay their own lives…
The first victim of speed became a British engineer Donald Campbell, a hereditary racer, the eldest son of the famous champion Malcolm Campbell, the Creator of the boat with the romantic name “Blue bird”. But if Campbell is the father of his “Blue bird”, as expected, brought happiness, then Campbell is the son she killed. However, it was a different “bird”. Donald Campbell built a boat of essentially new type: aviation turbojet engine, only the old name remained, obviously, is based on luck and racing luck. But happiness at this time has changed the land: in one of the record arrivals jet Blue bird pulled away from the surface of the water, flipped in the air and buried under the rubble of the designer.
After Campbell such disasters started to happen more and more often. Many famous athletes have died, and not solved the reasons for the failure. One hundred th it is obvious that without serious research and development work to move forward is impossible. To explore the dark spots in the behavior of “flying boats” were involved in the largest scientific power, uses the most modern computer technology, sophisticated instrumentation facilities, means of kinofotostudii experiments. The result was not long in coming: the main causes of accidents on water has been solved, and the designers got the opportunity to continue working on further improvement of the “flying gliders”. It turned out both for the study of modes of flight at low altitude and training of the drivers of new mode of transport requires a special test set-up, flying benches and machines-fitness equipment. 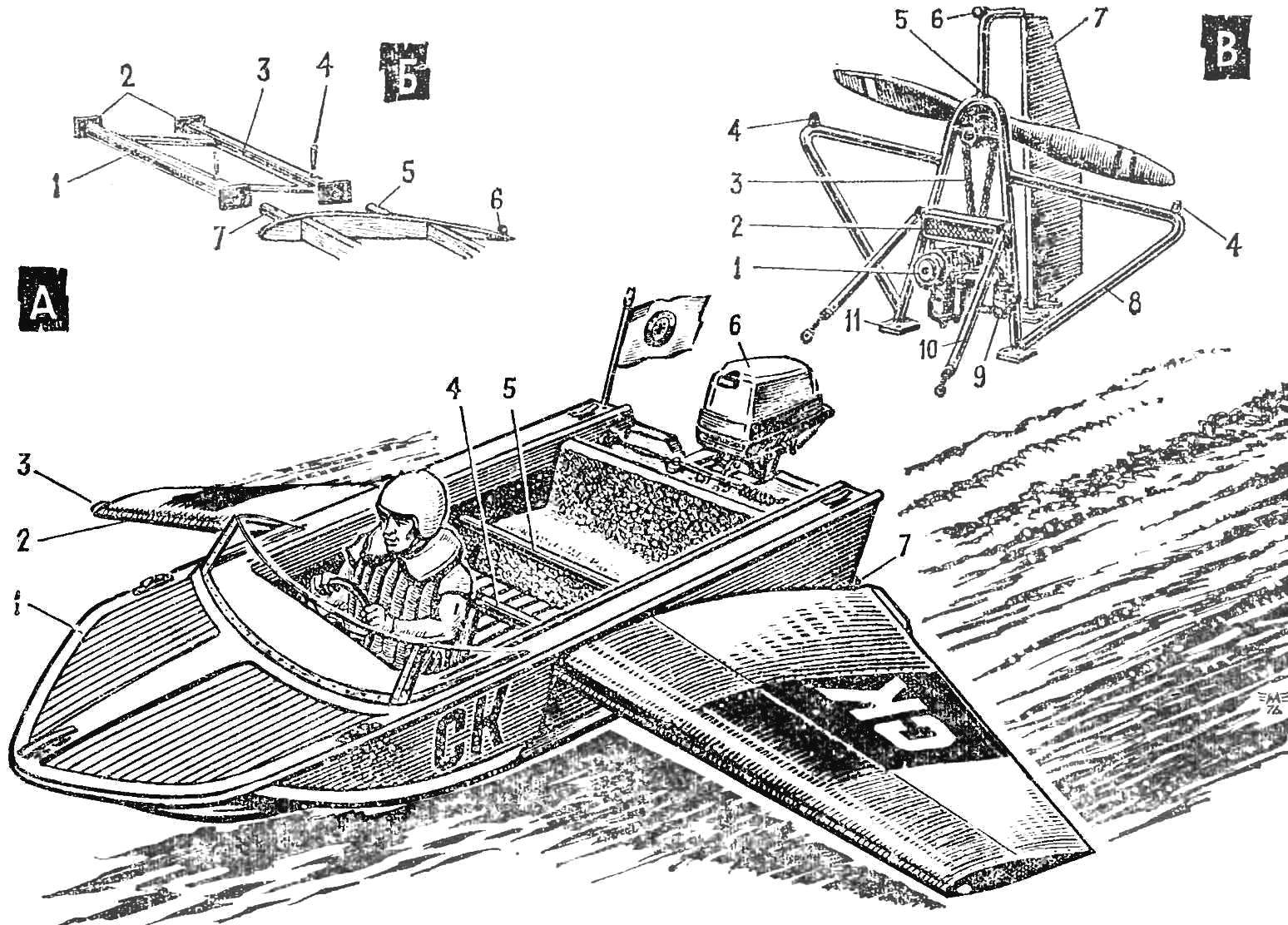 A — wing system in combination with an outboard motor:
1 — the case of the “trimaran”, 2 — a add-on console wing; 3 — Parking light (left — red, right — green); 4 — front spar center section, 5 — rear spar of the center section; 6 — outboard motor 25-30 HP; 7 — the attachment point of the trailing edge of the wing to the body;
B — the design of the power frame of the wing:
1 — front longitudinal; 2 — flange to the sides of the hull Motorboats; 3 — rear spar; 4 — tapered bolt; 5 — the tubular tip of the rear spar; 6 — the fixing unit of the trailing edge of the wing; 7 — tubular tip of the front spar;
In — propeller unit with a propeller:
1 — the engine (power head outboard engine “Vikhr-M”); 2 — vodoradiatora; 3 — chain transmission from the engine to the propeller; 4 — position light fencing propeller (right — green, left — red); 5 — tube frame; 6 — mast-head light (white); 7 — aerial rudder; 8 — enclosure of the rotor; 9 — a broad tank of system of cooling; 10 — brace motor; 11 — basic heel motor.
Such a stand, created by the students of Bauman Yu. Makarov, V. by Anikin and A. Sobolev, was exhibited at the NTTM-76. About it today, say the authors.
The main goal that we have set ourselves is the creation of a rescue tool, able to quickly assist the sinking or in distress on the water people and with a minimum loss of time to bring casualties to the shore for emergency treatment. Of course, such a device can be used for communication. It seemed to us that with the help of simple attachment of the wing device can be given a completely new quality to almost any commercially available our industry to ship — be it a boat or a boat.
For starters, we chose as the basis for the hull of boats from fiberglass, hull “trimaran”, known as “Crystal” (this boat was produced in small series businesses Emptied). It set lukosiene the sagittal plane (in plan) shape having a large negative V, and submerged trailing edge (General view shown in figure 1, the scheme is in three planes, figure 2). While the boat itself is not subjected to any major alterations, except for strengthening the transom and plate bosses for mounting the motor.
During the test we were supposed to try out two versions of the propellers — first water, then the propeller, driven in both cases sigovoe head outboard motor “Whirlwind-25”. In the first case, the control is performed by turning the entire motor, and the second by air the helm area of 1.2 m2, located directly behind the screw.
As mentioned above, at high speeds and many boats have a tendency to break away from the water and go into airplane mode at a very low altitude, determined, as a rule, the immersion depth of the water screw (in case of installation of the propeller, this height can be much larger). Very often ships with water propellers, jumping out of the water, keep moving, and does not touch the water, as experts say, — “one screw”.
But such a movement is almost uncontrollable and even dangerous. We have developed wing system, thanks to its special shape, makes flight near the surface of the water more stable and, most importantly, self-regulating: if you have any roll on the descending wing is growing rapidly the lift and straight flight itself is restored. Because of this self-regulation eliminates the need to install ailerons of the aircraft type, and the management of such a vessel does not demand long training of the driver. 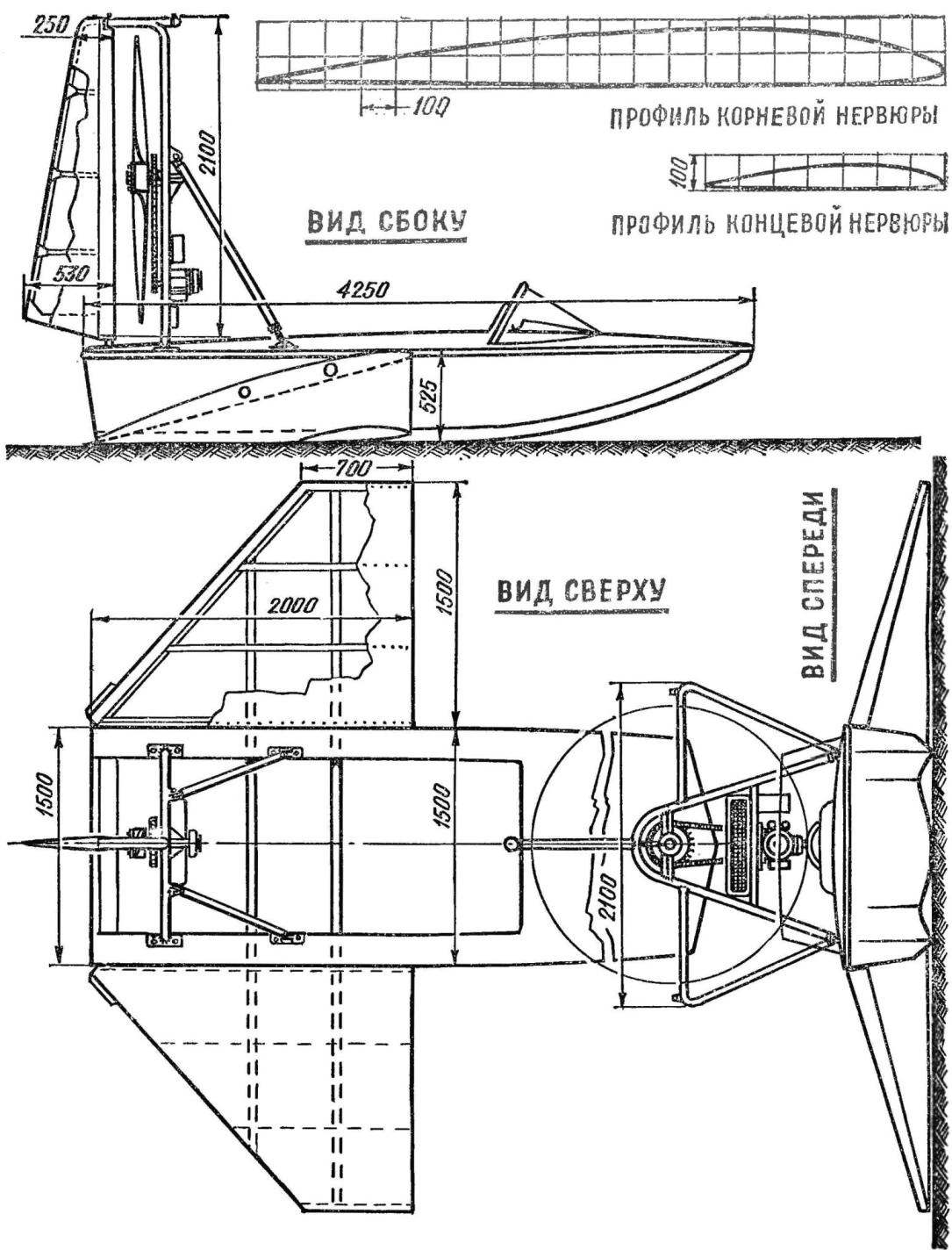 Fig. 2. Boat on the wings.
He popet (in the case of the conventional outboard motor) is as follows: in a static situation, it is normal for lees boat, the trailing edge of both planes is immersed in water to a depth of 80-100 mm; when pulling away and at speeds of 20-30 km/h these submerged areas of the wings create additional hydrodynamic lifting SIPU, contributing to a “floating” boat; at the same time on non-immersed part of the wings there is no aerodynamic lifting force, and when the boat air speeds of about 50-55 km/h the gap between the wing system from the surface of the water. The narrow gap formed between the trailing edges of wings and water, facilitates the flow of the oncoming flow along the hull, thereby increasing the lifting force, “villariva” wave and is jet. The boat takes off and continues to move at 0.3—0.5 m, using the effect of dynamic air cushion.
From the above it is clear that the most advantageous for a quick takeoff is the movement against the wind — in this case, its speed is added to the boat speed and the required air speed is achieved faster. If you install outboard motor fly height is adjusted automatically; as the propeller out of the water it can be reduced, since the propeller thrust decreases. This interdependence facilitates the management apparatus and allows to hope for a wide spread in the near future “flying boats” with outboard motors.
Propeller unit with a propeller significantly expands the scope of the “flying boats” as they become independent of water and able to continue Pope over virtually any underlying surface, be it sand, wetlands, moth holes rivers or ice. The altitude can be increased (with the described wing device) to 1-1. 5. M.
Designed and built by us propeller installation consists of a si-bark head outboard motor “Whirlwind-25” with chain transmission to the propeller. Reduction of 1:3, which maximizes the use efficiency of the screw. Because the motor “the Whirlwind” has a water-cooled, it had to be equipped with vodoradiatora and the surge tank with a capacity of 2 L. as vodoradiatora you can use the oil cooler from the car “Moskvich-412” or one of the available range of automotive water heaters, installing it so that it is blown air flow from the propeller.
Providence tests on the water showed that, in General, hinged wing system is justified. But that doesn’t mean it should be copied: early to speak about it, because the concept of flying at low altitude have not yet found wide application and technique it is not sufficiently studied. Our work is giving only the starting data for further experiments.