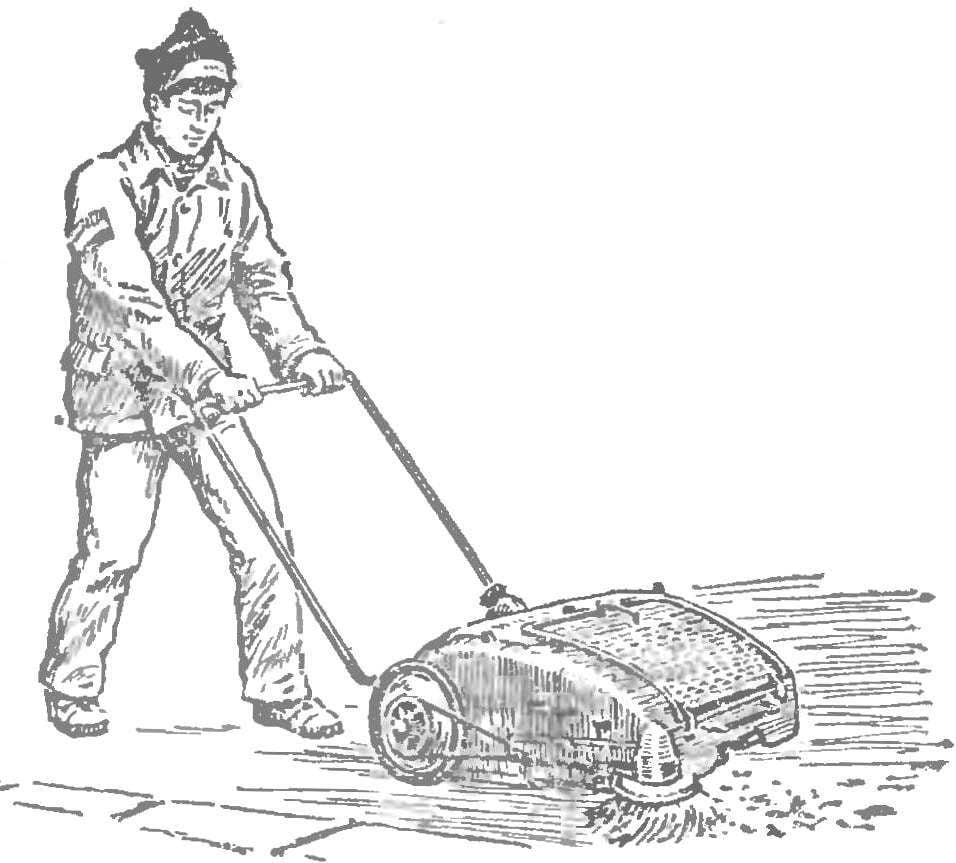 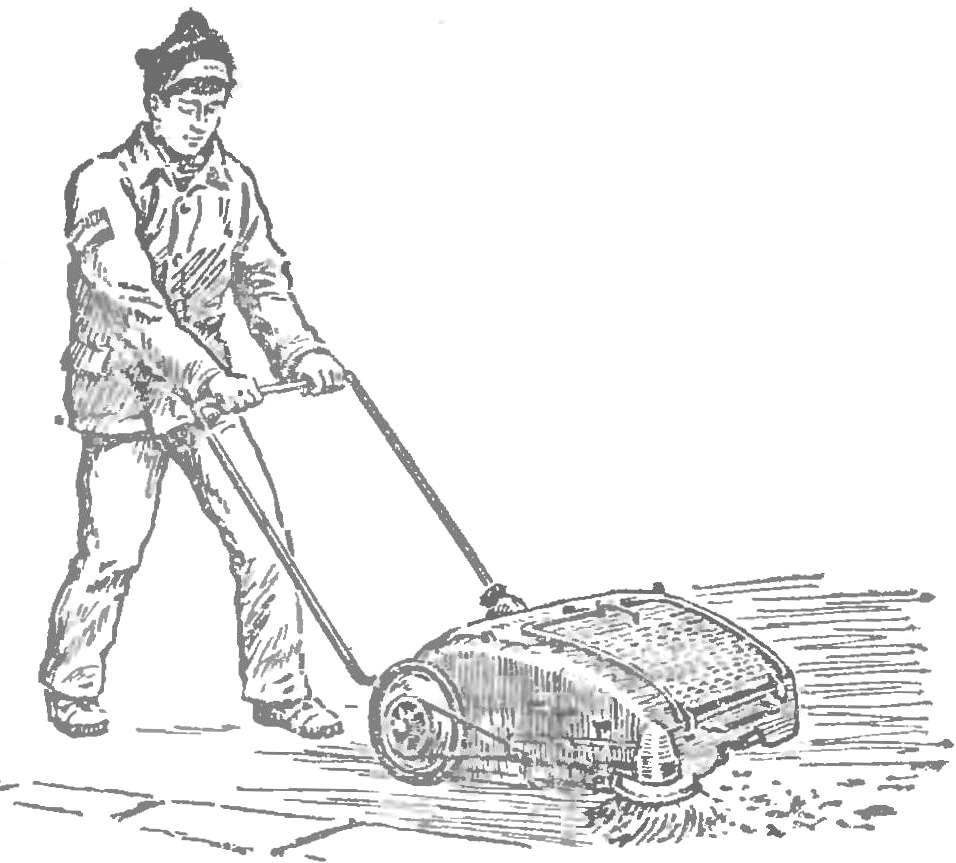 In the “M-K” No. 4, 1982, an article was published in which there was a talk about a club for young technology house management № 8 of the city of Vitebsk, about the fun and useful machines that are created by its members. Among the most original devices was mentioned and mechanical sweeping machine MPM-1.
It was conceived as a means of facilitating the hard work of cleaners and janitors. Under the leadership of V. M. Neboraka in charge of the club, MPM-1 was built ten Skole-ing in age from 13 to 16 years. Ego Sasha three — Ludwi Cove, Odnoralov and Slepnev, Kostya Abramov, Gregory Alekseev, Edward Zubritskii, Sergei Razumov, Dmitry Roshchin, Andrew Sochivko and Victor Kharitonenkov. All of them were awarded medals “Young member of the USSR national economy”, as their mechanical broom has made an impression not only on the Republican exhibition in Moscow at the main exhibition of the country.
SIMPLE AS TWICE TWO
“But it’s cleaner!” — it SAC exclaimed one of those present at the first test just riveted and not painted MPM-1. Sampling was carried out directly in the workshop of the club littered the classroom floor.
Drove the car back and forth and gasped, her PI mote, even from the cracks between the boards swept clean! Calculated per hour using the MPM-1 can be removed indoor or outdoor area with a size of 50X50 m — two and a half thousand square meters. Hand-broom or a broom is hardly possible!
I must admit that when the car was opened and showed the CE device, at first there was a feeling of light disappointment. MPM-1 was seen as a complex unit, stuffed with tricky mechanics. But inside of a drum with brushes Yes, the bunker with dust. Really, it’s simple as ABC. In addition, many details of the car looked familiar, have often encountered. 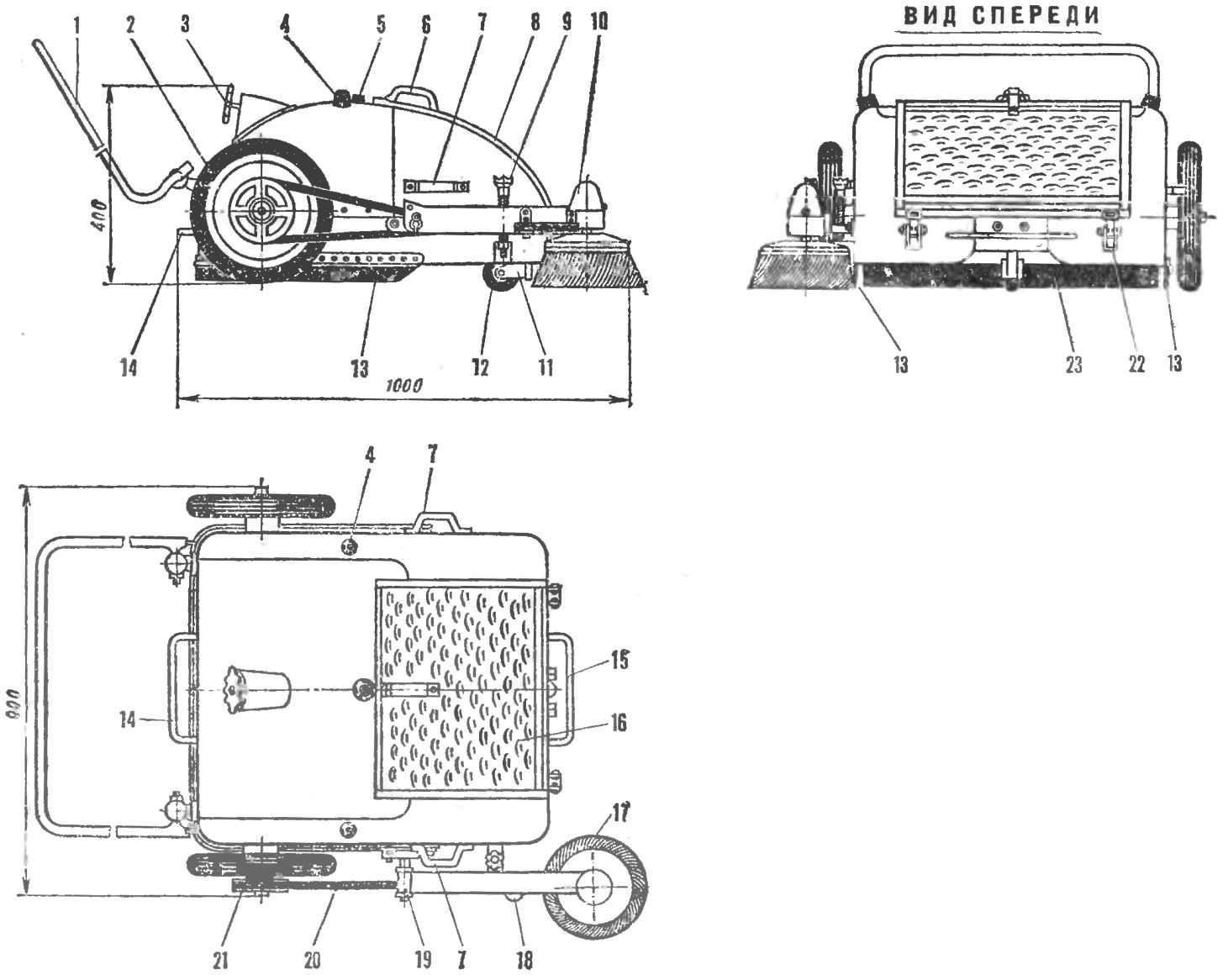 Mechanical sweeper:
1 — swivel handle drive, 2 — wheel, 3 screws lift brush drum, 4 — support arm, 5 — rubber foot grips the hood, 6 — handle of the hood, 7 — stick container, 8 — bonnet 9 — screw lifting curb brush, 10 — cover, 11 — took, 12 — front wheel 13 side rubber cuff, 14, 15 — clamps to carry the car, a 16 — mesh filter, 17 — curb brush, 18 — roller, 19 — axis console, curb brush, 20 — V-belt drive, 21 — pulley 22 — cap lock, 23 — rubber valve-podberscek.
The way it really was. V. M. Neborak touched a certain part, and called: sprocket, chain, wheels from children’s bikes, only the spokes removed and replaced with discs from electromyographically, pulley from a washing machine; gear — large hand drill; drop arm of the actuator and the frame elements (tubes and angles), from cots and children’s sleds; and here in hull design used elements of street lighting, motorcycle fenders, plate, sheet aluminium; bunker carved riveted to the zinc trough; the front wheel from the truck; all the knobs — window; brackets and cap locks from boxes with the devices; mesh dust bin from the loudspeakers; and finally, brushes for sweeping floors.
SO, KONSTRUKCJA
Chassis MIM-1 tricycle. All wheels are independent from each other, although the back and sit on the same axis. Right the drive. When driving the pulley via the V-belt through a system of rollers, hidden in the console transmits the torque of the brush border, and that throws debris from the baseboards or the curb on the course in front of the car. The speed of rotation of this brush depends on the rate of movement of the machine itself, and friction force on the floor from the height of the brush above it, an adjustable screw on the console. If necessary, the brush border can be excluded from work, relegating the console to a vertical position.
Inside the machine there is a brush jam. It consists of two cheek — aluminum plates connected on the sides four horizontal pipes. The top two play the role of a frame, the lower axes: one rotates the carriage (here sit still wheel and a large sprocket), the other rotates the drum brush. These axle — bearings.
From the drive wheel sprocket chain transmits motion to the intermediate unit, and the brush drum. For one turn of the wheel scrolls the last four times. 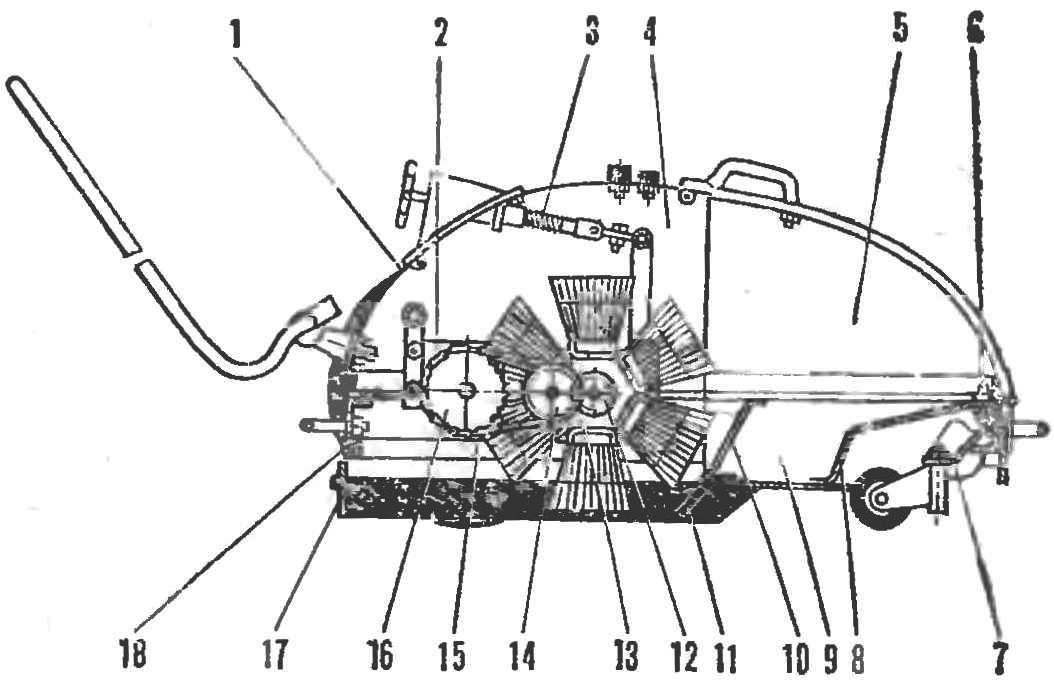 Device MPM-1:
1 — upper trim, 2 — cheek brush-carriage, 3 — the lifting mechanism of the brush drum, 4 — side cladding, 5 — a removable container, 6 — pin retainer (2 PCs.), 7 — bracket front carrier wheel, 8 — the front wall of the hopper, 9 — bunker, 10 — rear wall, 11 — rubber valve-pick-up 12 — gear brush drum, 13 — brush-type drum, 14 — intermediate unit gear-star, 15 — circuit, 16 — sprocket, 17 — rear rubber cuff, 18 — tube frame.
The drum consists of an angular frame with fixed on it 12 brushes. The friction force their pile on the floor is governed by the mechanism, the control screw which is placed into the body of the machine.
In front of the MPM-1 is a removable container. It is mounted in a three channel bracket and fixed with two pins inserted in one of them. On top of the container is closed by a bonnet which is held in place by swivel locks. At the bottom of the container has a dust hopper with a capacity of half a bucket, a niche for freely oriented front wheels and rubber valve pick-up. Latest installed slanted and flowing debris under them when the machine serves as a shovel to the brush of the drum, threw the debris into the hopper. The air, driven brushes, goes through the mesh of the hood. Under it placed flannelette filter, so even the smallest dust does not penetrate to the outside. Bottom working volume of the machine seal rubber cuffs, side and back.
Weighs MPM-1 of only 25 kg, which allows the two teenagers easily carry it around.
A. TIMCHENKO