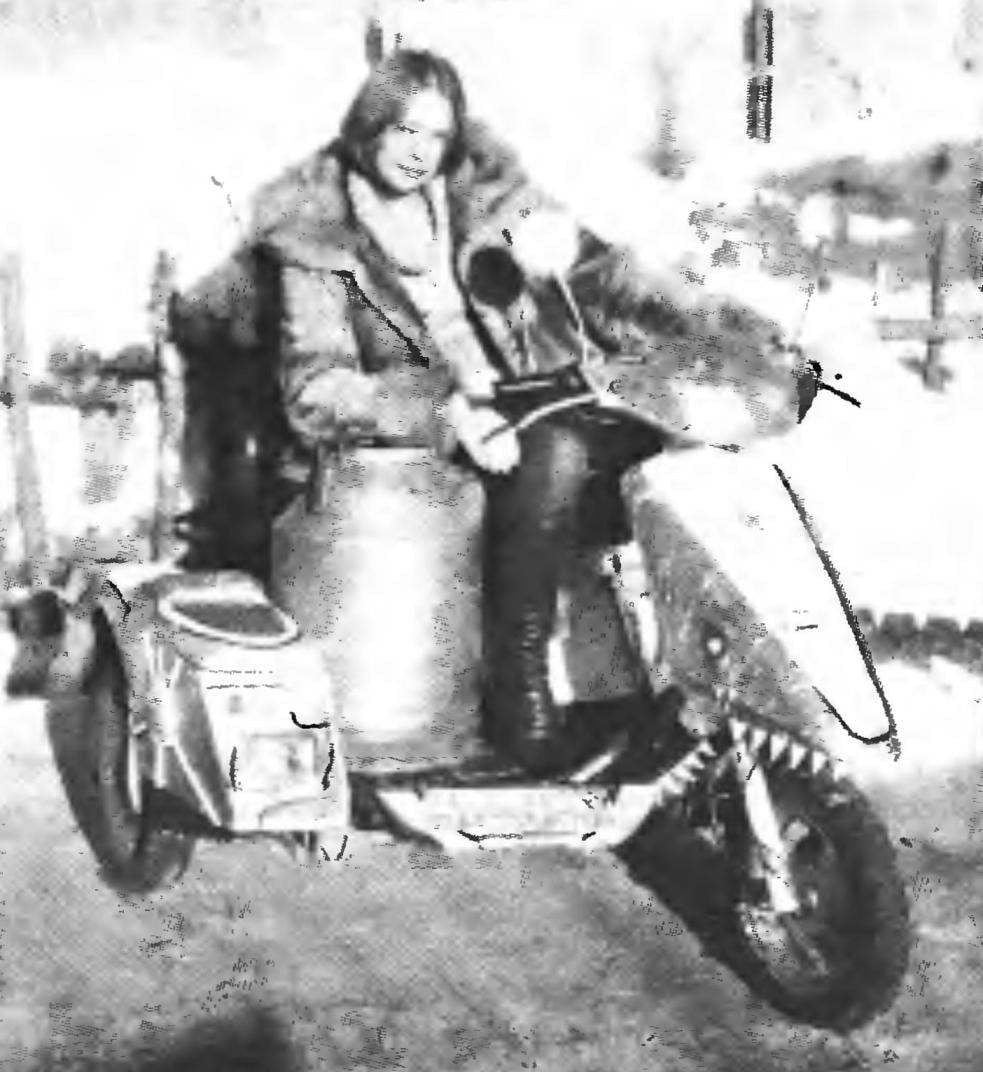 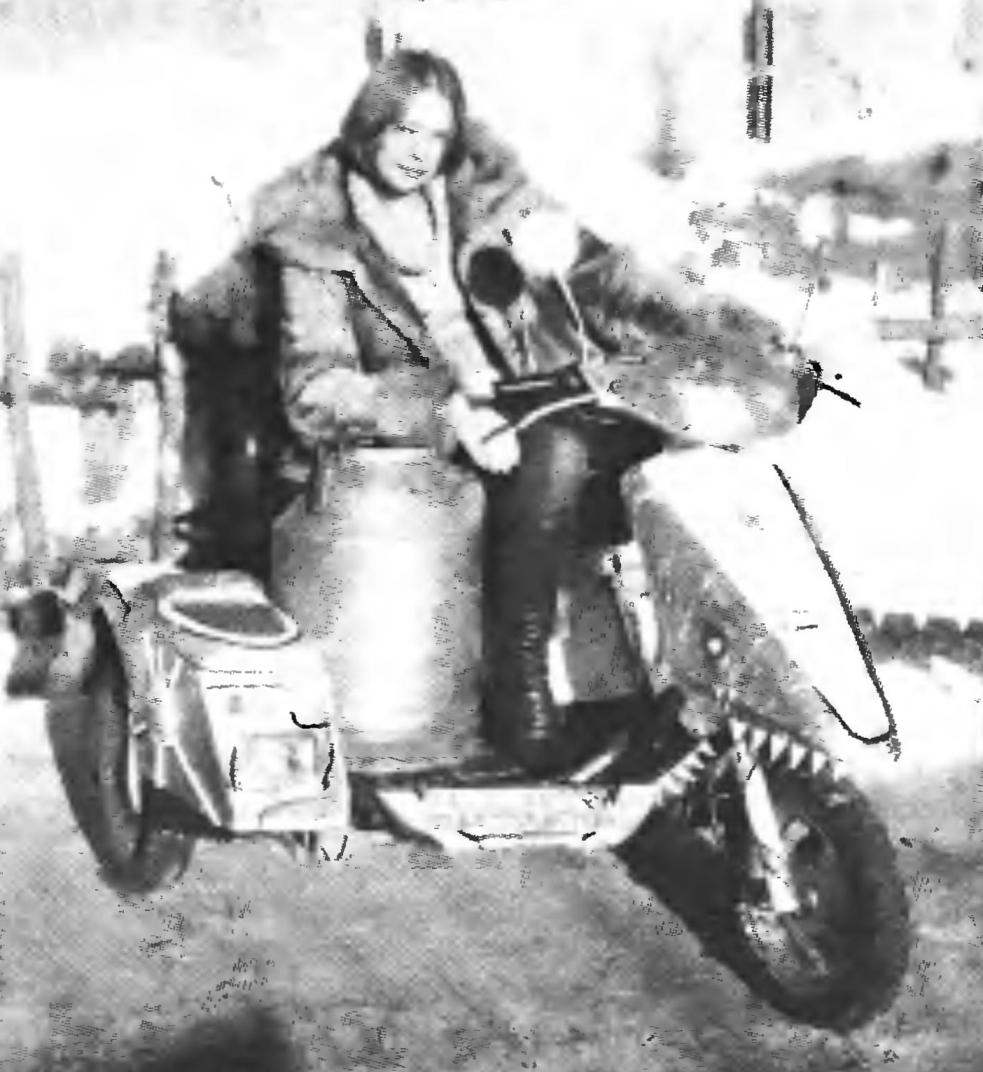 I’m a longtime admirer of the magazine “modelist-Konstruktor” and subscribed to it for many years. Then, due to financial difficulties had to deny yourself this. But since last year started to write again. I am glad that, as before, in publications find lot of useful information.

Currently I live in a rural area where to ensure the existence of no small tools So difficult, turning the garage into a workshop, collect here the necessary support for rural labour arrangements.

Great help on the farm was literally restored by me from scrap a few years ago mini-mokik of AMANA, which is equipped with a side cargo trailer (or sidecar, as often called in the people) own design.
The trailer is a frame with wheel and cargo platform on it without the “cradle”. Although there is nothing stopping the platform to equip the removable seat—back strength to carry two people (driver and passenger) at the mini-mokik is enough. As for loads, I translate them on it right up to 120 kg, including a lengthy (up to four metres) timber and lumber. Looking ahead, I note that to date, has already produced four cargo mini-mokik: one for himself, in case of breakdown and lengthy repair of the first, and two more on order for friends—this technique turns out to be in demand.
Fundamentally the design side of trailers are similar, but the materials are different—one even used ready duralumin frame from the external fuel tank of the aircraft, which went almost without alterations and in its pipes is composed of motor (from the “Ural” and “Izha”) ball bracket that was welded to the tubes of the frame of the mini-mokik. 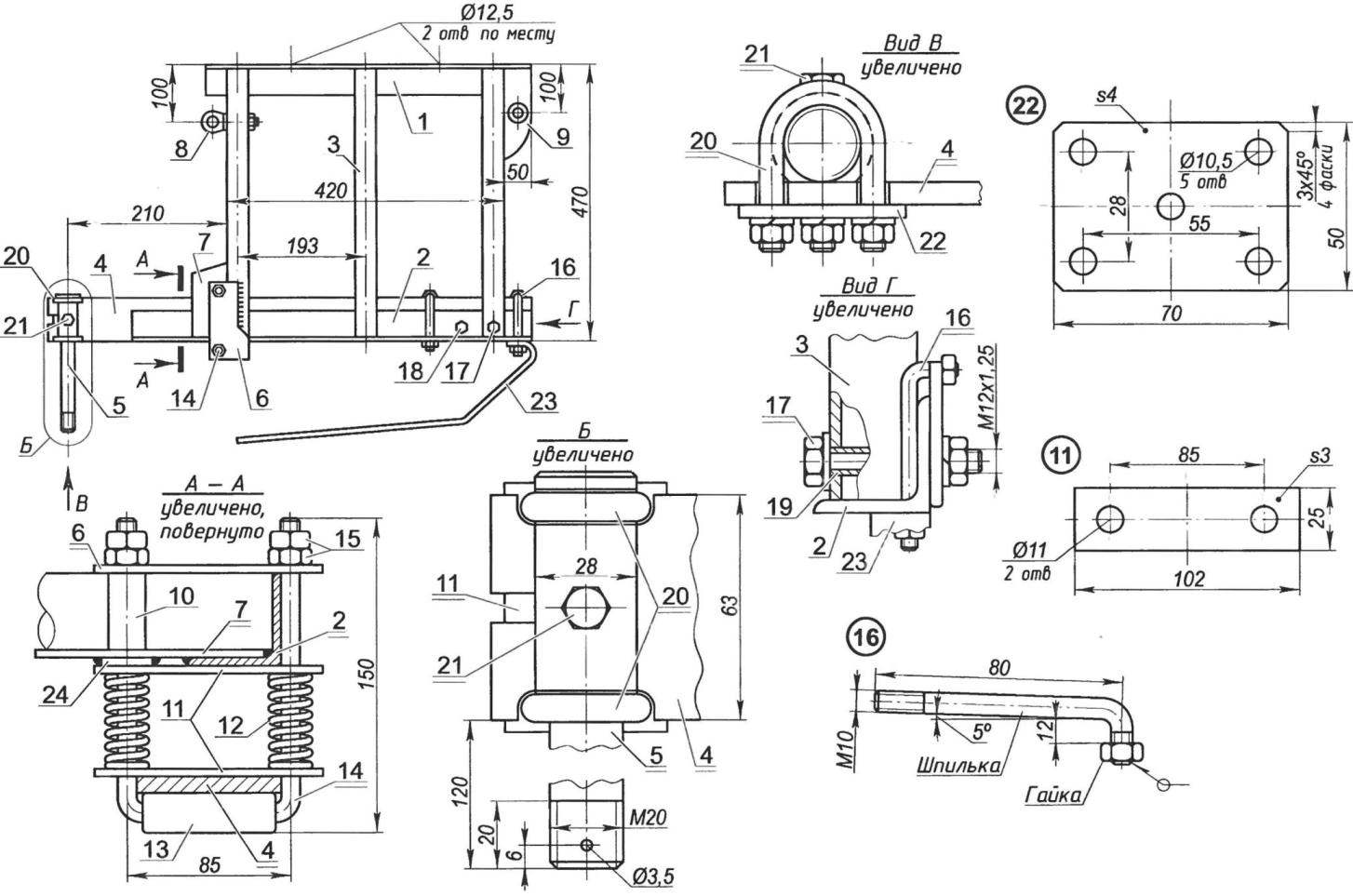 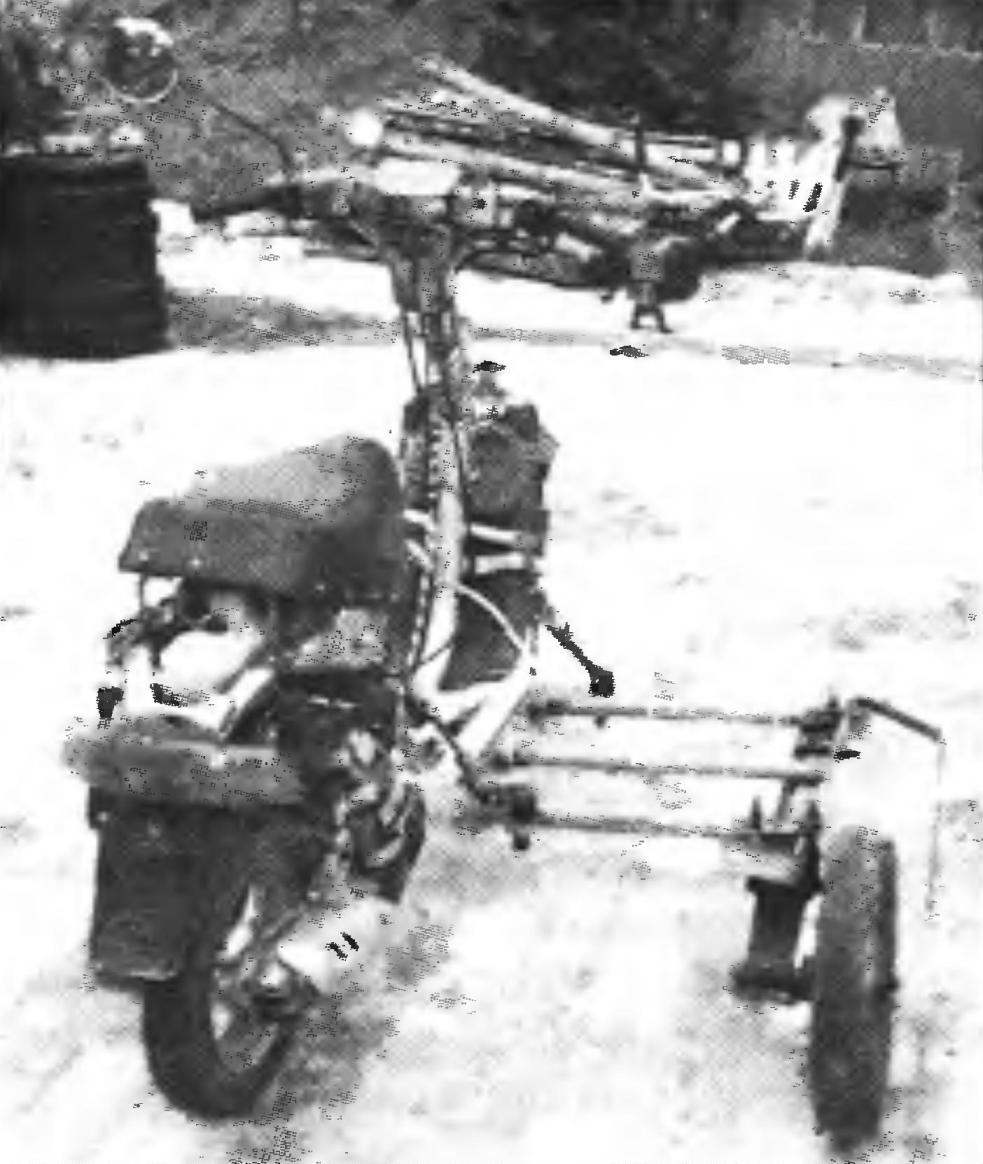 The frame side of the trailer with a mini-mokik 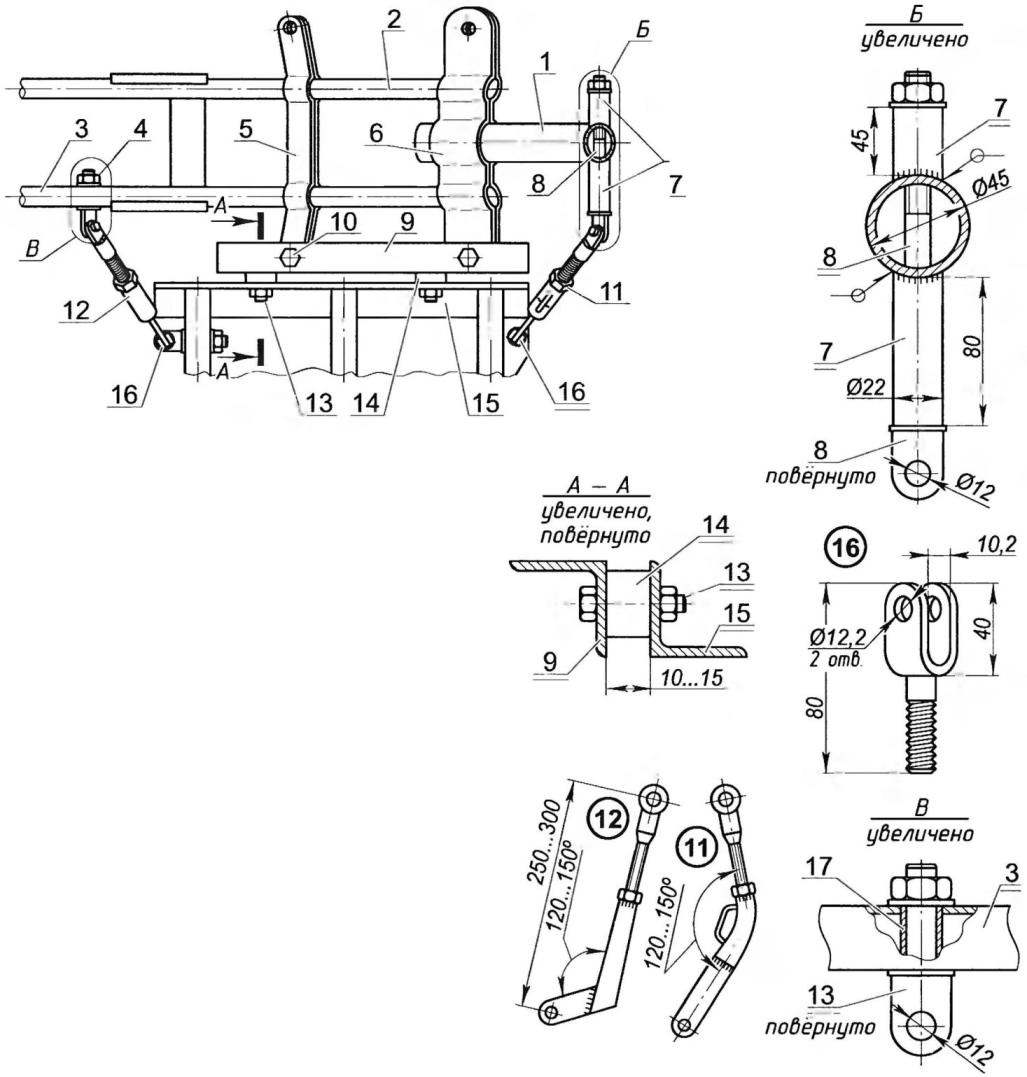 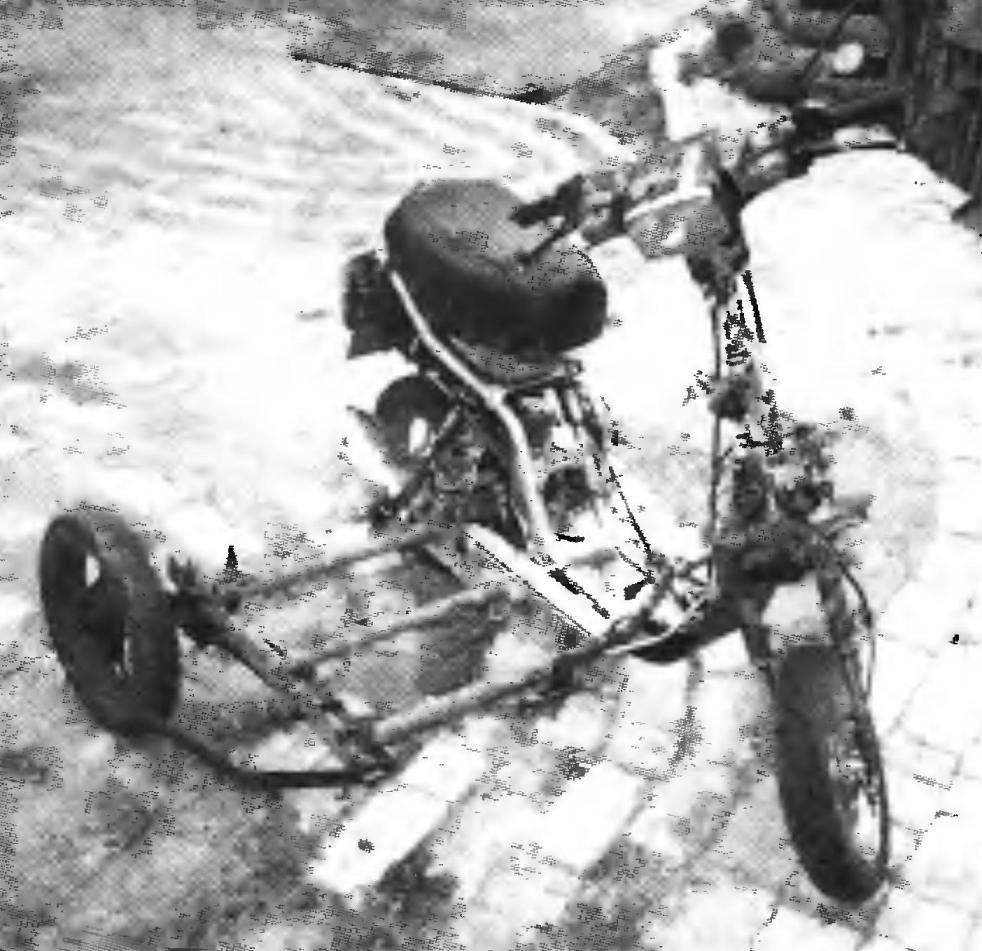 Truck chassis of the vehicle on the basis of mini-mokik
For readers of the magazine give the description and drawings of the trailer, made of the most common and abundant materials, which can be connected to almost any mini-mokik no alterations last only equipping “the tractor” tow bar Yes preveiw to the tubes of his frame a few Ushkov for the struts attachment of lanyards.
Described side frame of the trailer is welded, rectangular and consists of two side members (longitudinal strength elements) and three crossbars. The side walls are made from angle steel rolling corner № 4,5, and crossmember—from a round pipe outer diameter of 34 mm.
For the suspension wheels used a single leaf spring section 63×8 and a length of 680 mm from the truck, pulling it using the bolts at one end to a longitudinal member of the frame and at the other end mounted to the axle, attaching it with two step ladders M10. To do this, the spring had to cut a few shaped grooves that were carried out on a desktop circular saw (called home masters of just a “circular saw”), replacing it with a circular saw blade for cutting abrasive circle. By the way, “circular saw” was replaced by me several machine tools (sandpaper, milling and even turning)— it handled all the metal parts. For the transport of heavy cargo in addition between the spring and the frame put two normally stretched coil spring.
Wheel for trailer size 3.00×10″ used from another mini-mokiki and the hub is adapted from a motorcycle “Ural”. Wheel cut the center hole with a diameter of 58 mm, and the hub cut off the sides (flanges with holes for spokes) and wail it in the wheel disc at the place of the removed Central part. Additionally, the hub has strengthened the three spokes of steel strip 30×4 mm section, preveiw their ends to the wheel rim and the brake drum. The axle is machined on a lathe from steel rod with a diameter of 28 mm. wheel travel when empty the trailer is about 40 mm and, when loaded, about 15 mm. 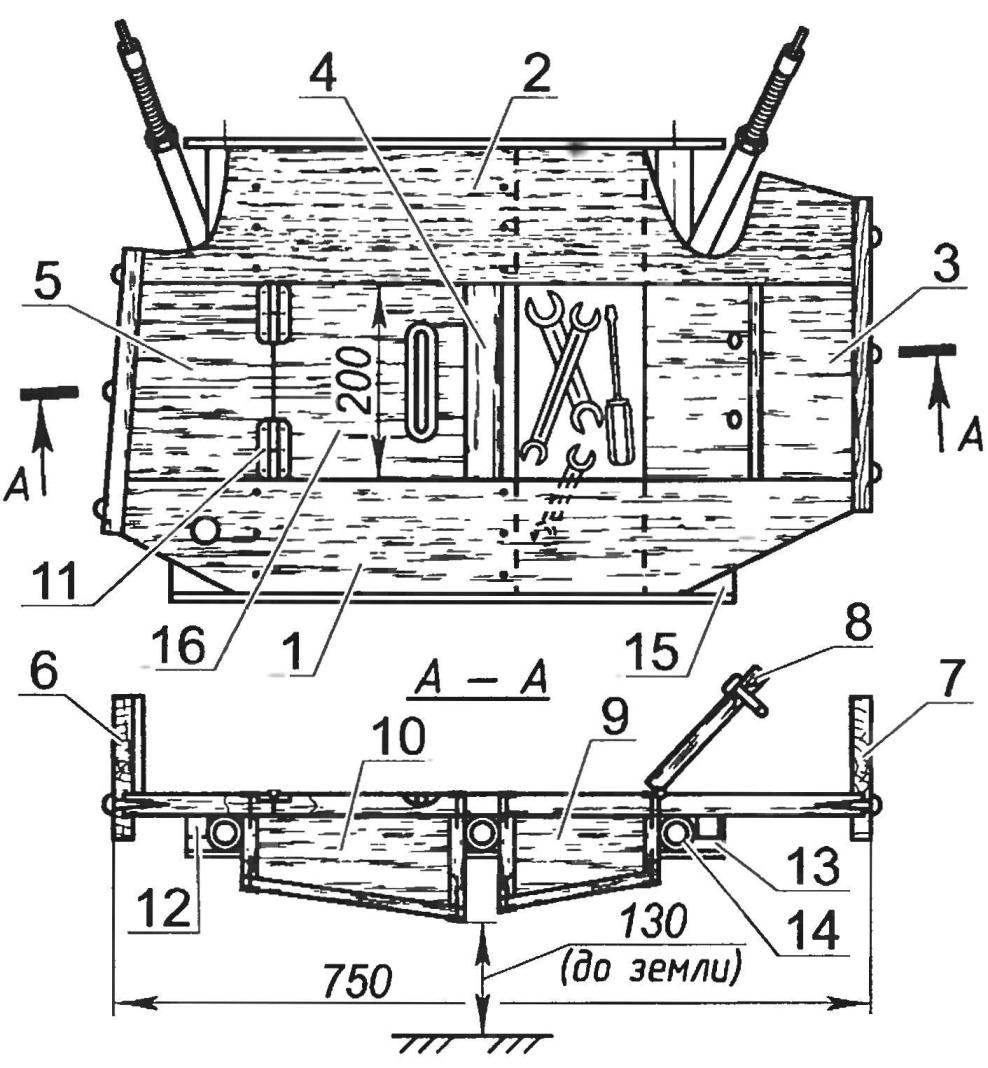 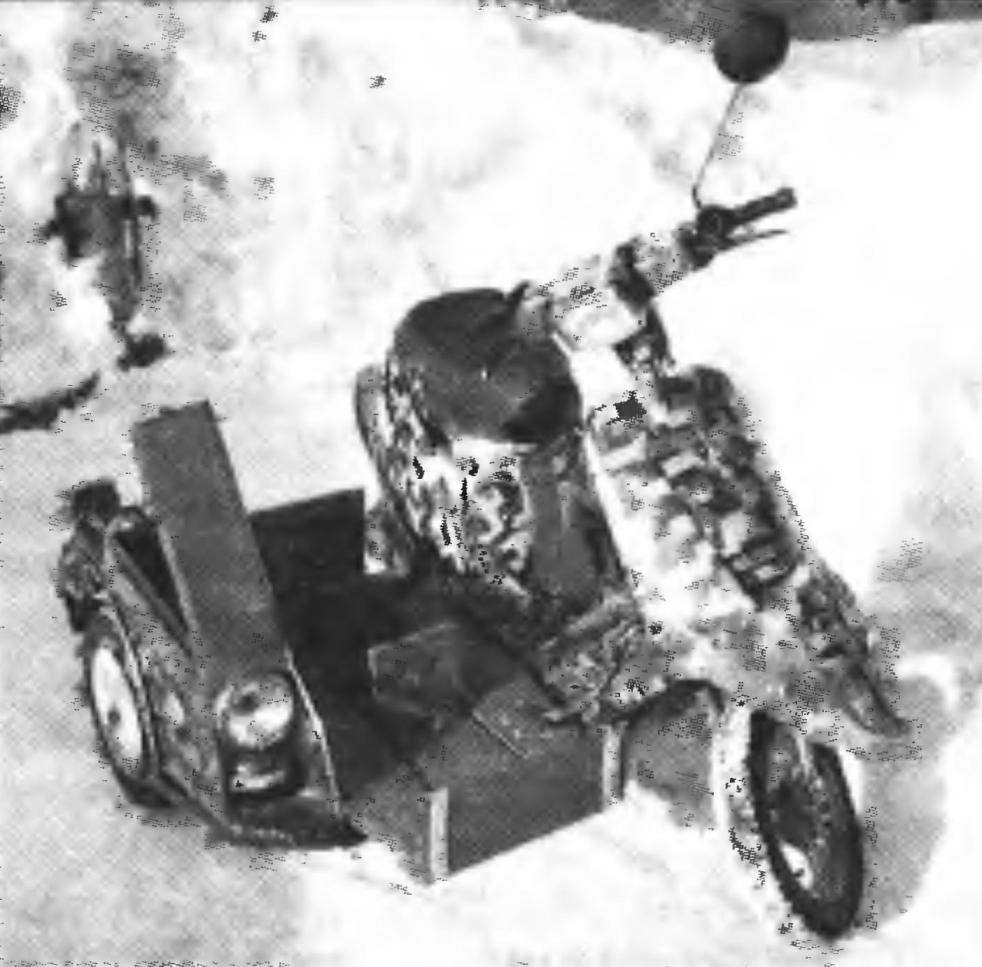 Mini-mokik with truck side trailer 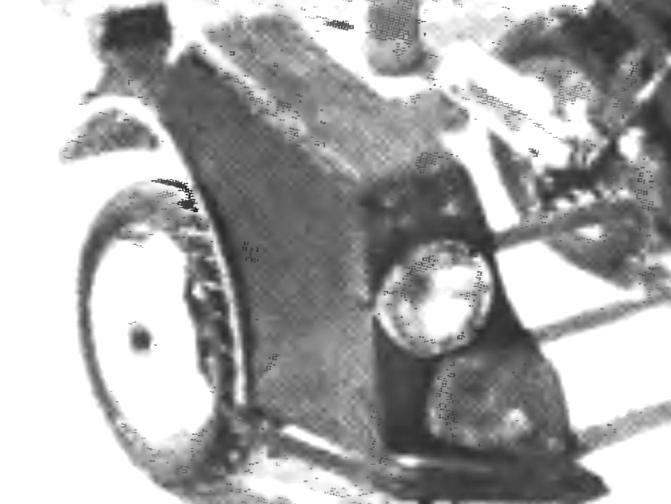 Suspension side of the trailer. Box of spares and wing are in a single unit
Fender (mudguard) to the wheel made from the halves of the rim the same Izhevsk motorcycle wheels. That half was cut even in half, but now along. In locations of holes for the spokes cut out triangular pieces. On the anvil aligned Central part to a right angle and riveted steel 0,8 mm strip to both sides (arcs) of the rim rivets with diameter 4 mm. To the frame wing is attached on the brackets from steel strips. The front bracket together with the outer side rail is the lower rail of the box of spares, and part of the wing—part of the bottom (or rear wall). The box itself is wooden, made of planks of 25 mm thickness. the Top box is covered with a lid, made in the form of the armrest: the Board is covered with foam rubber and is upholstered with leatherette.
From the same Board thickness of 25 mm are manufactured and trailer. It also has two tool kit, made in the form of grooves. They are closed with covers hinged flush with the platform. Handle covers made utaplivayutsya. When mounting the platform boxes are inserted between the cross members and longerons and serve as stops, not allowing the platform to move neither forward nor backward (right-left platform don’t allow to move the vertical wall parts of the spars) without any additional fastening. And this, in turn, allows you to quickly remove the platform from the frame of the trailer. On the platform in front and behind are arranged the removable borders, and because the trailer can carry even a small piece (crumbling) loads. For bulk cargoes on the platform, put a suitable container, and the water I drive in large jars.
Mount the side of the trailer to the mini-mokik is a left longitudinal-to-longitudinal traverse attached to the frame of the tractor on the right side, and posts-lanyards. The traverse is made from the same area as the longitudinal side frames of the trailer, only installed a shelf up. The yoke mount to the frame is carried out using a pair of special clamps made in the form of counter braces with welded thereto threaded studs of the M12 bolt. For lanyards in the tubes of the frame are drilled corresponding holes or welded lugs with the same hole.
The turnbuckle adjusts the angle of the camber side of the trailer relative to the plane of symmetry of the mini-mokiki, making it easier to manage mini-mokik on the turns. To save the already small usable area of the platform of the trailer lanyards made curved. The angle of convergence of the same wheels that eliminates “cravings” of the trailer to the right is regulated with the help of rubber washers-bushing, insert between the left side rail of the trailer and the traverse.
If necessary, the side of the trailer quickly (it takes about five minutes) and easily detaches.
Fully manual control (all controls on the mini-mokiki focused on the steering wheel) and three points of support provide the opportunity to use it even a person with a disability of the lower extremities.
The trailer is equipped lighting signalling devices (brake, tail and turning lights) from a motorcycle “Ural”, which allows you to travel on a cargo mini-mokiki and on public roads. Well, the driver’s “rights” to control such a vehicle (with engine capacity up to 50 cm3) are simply not required. 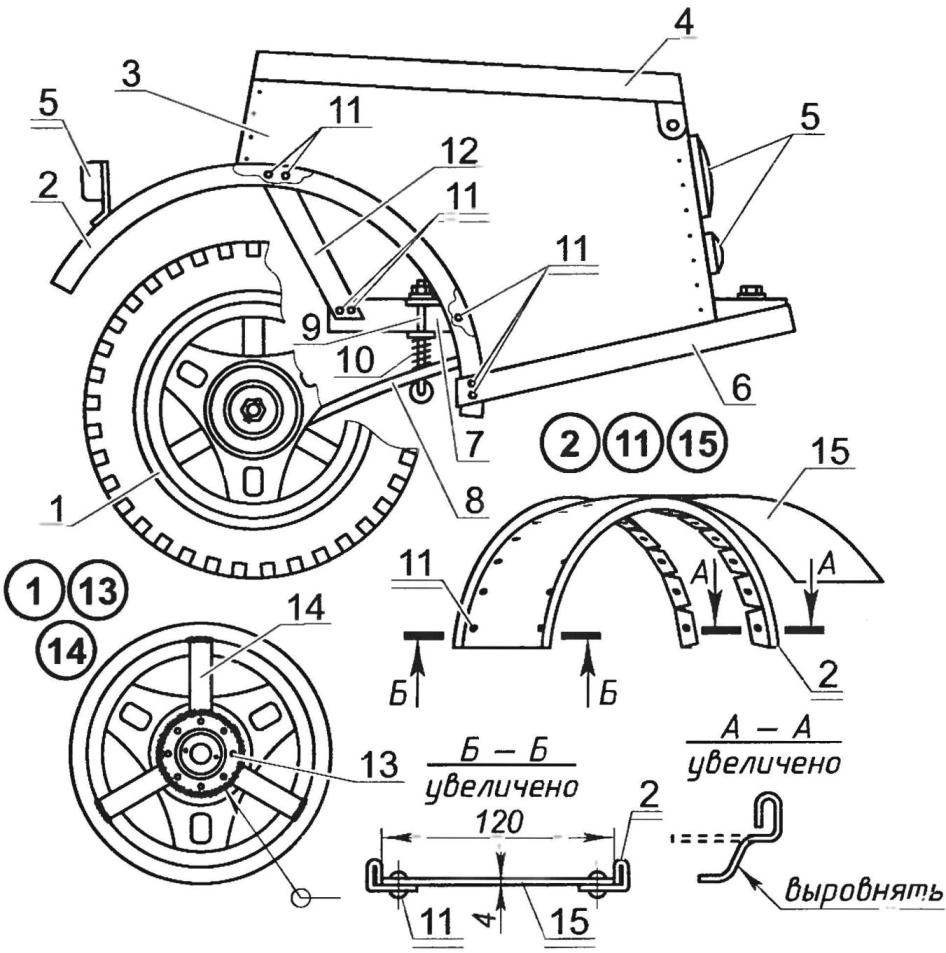 Out of the woods with firewood for groomed winter road
On one mini-mokiki, to increase ground clearance (clearance) to the feathers of the front fork welded an extension tube (length about 50 mm). Did the same thing with the rear shock absorbers, although it was easier for them to be replaced by longer ones. But at that time I had no such, and then left as is, because breakdowns do not happen
It would be unfair not to mention “acquired” mini-mokik in the modernization of the disadvantages. So, significantly increased the consumption of gasoline, often have to change the piston group of the engine, harder to wear out the tires. But the long-term operating experience shows that these costs are more than compensated. With a sharp turn to the right, there is a risk of stalling on the side, which, however, is characteristic of all motorcycles with the lateral trailer.
In four years of operation hitting 3800 km. Annually harvested through mini-mokik to 12 m3 of wood. In one year moved on it in four months, about 12 tons of bricks from a distance of 2 km, loading at one time from 30 to 50 pieces. In General, he works like a dray horse.
G. ZARANKIN, POS’yanovka, Primorskiy