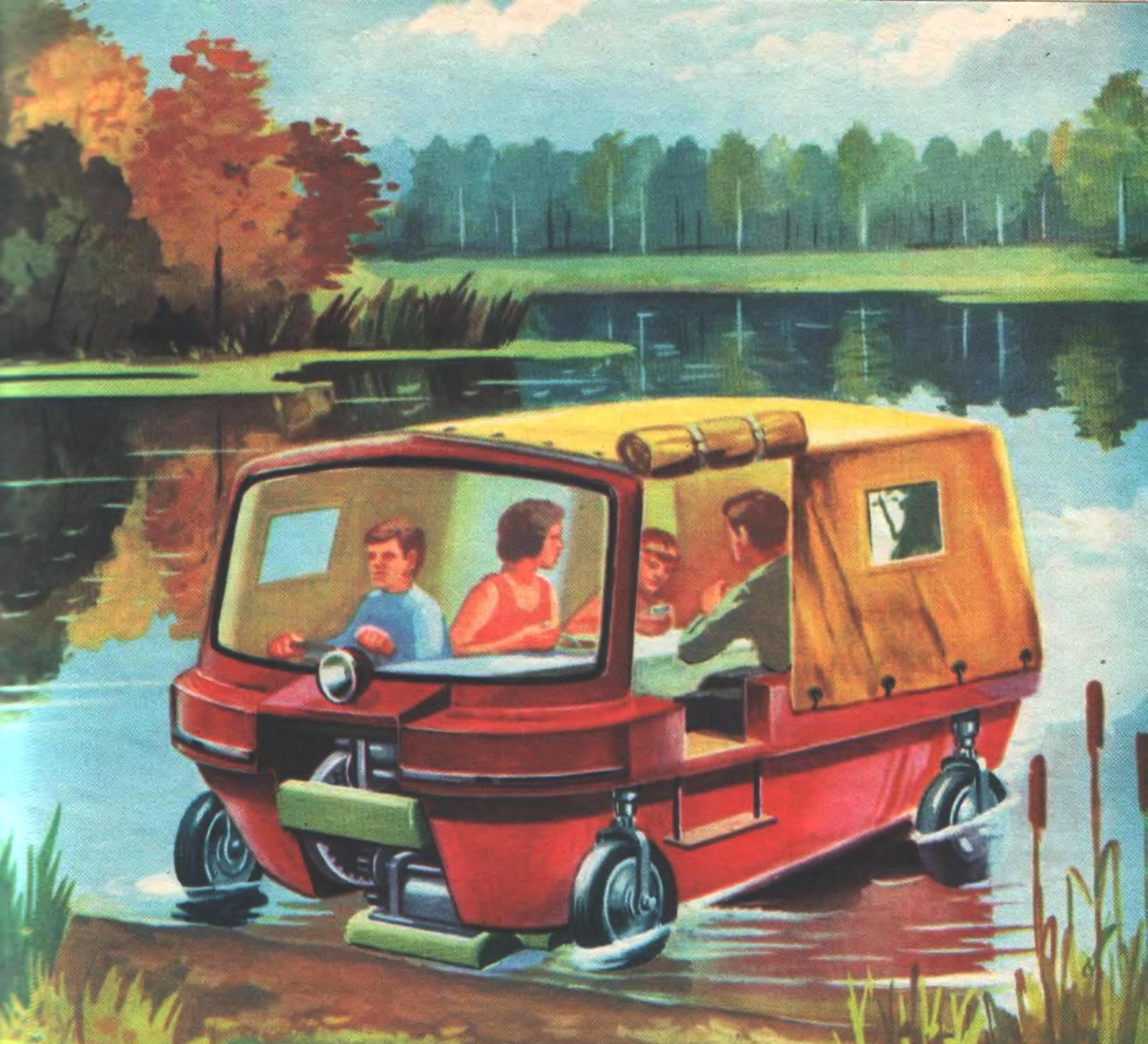 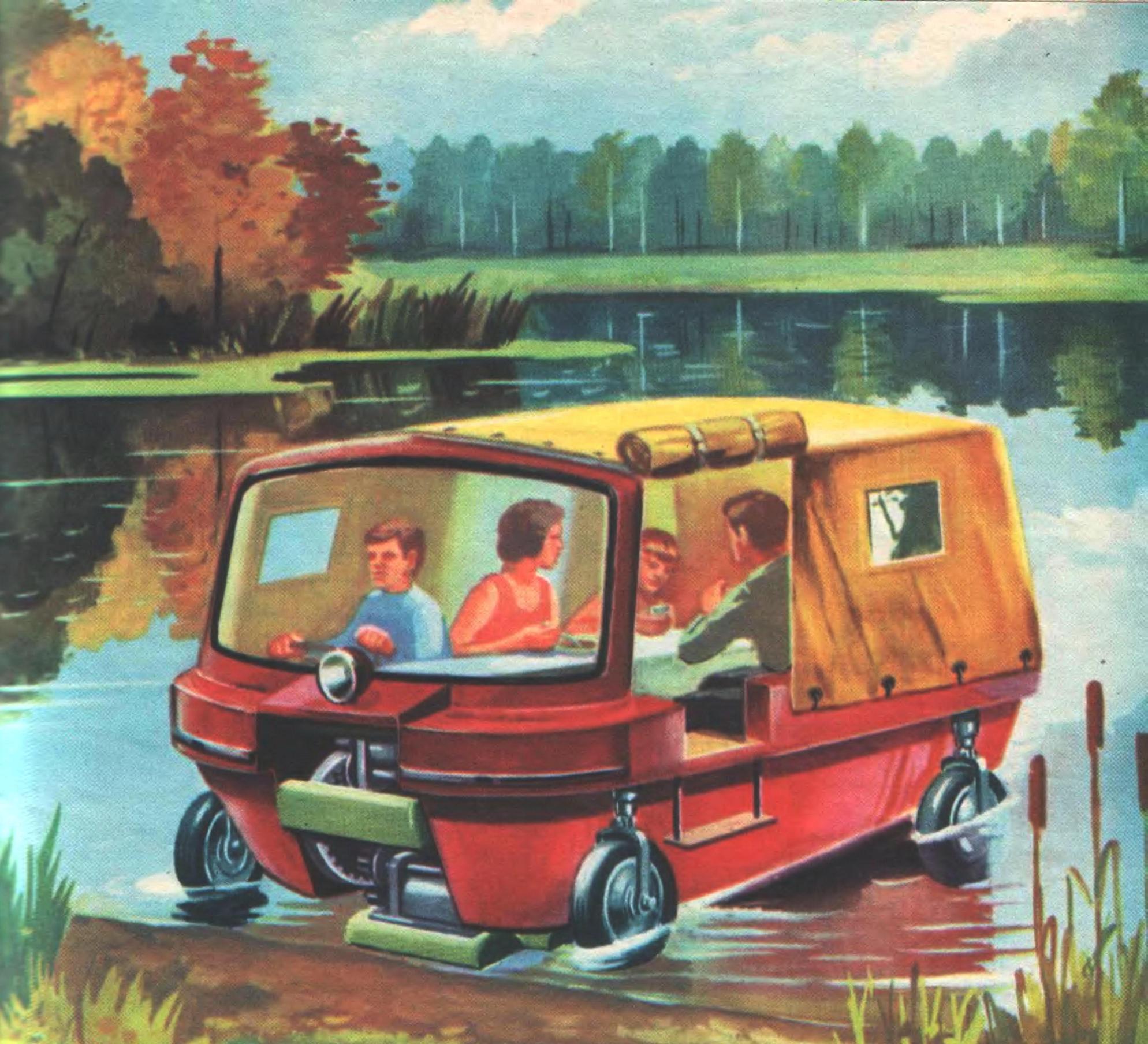 We have already talked about a jeep-climber, which could become a new kind of mountain transport (see “M-To” No. 12 of 1974). But machine-controlled trucks will be able to find application in the polar regions — to move through the ice zamorochena fields, and on water. At first, perhaps, as a small vehicle polar explorers and, later, as special cargo trasport type “water — ice” for the developing regions of Siberia and the North.
However, it will in the future. And while the weighty word would tell the designer. But in order for the enthusiast. who dares to start a new era of propulsion, it had a practical meaning, the author proposes to build and takovym the engine of the country-amphibious for the whole family on the water. And here is a lot of room for” technical searches and finds.
For mobile giving, obviously, not important speed, and hence the capacity of the energy source. It is important without the hassle and fees to move anywhere, combining the delights of a leisurely hike through the forests, hills, rivers and lakes with ease the car transporting all the necessary equipment.
The size and traction of this car-the tent will depend on the size of your family. They can increase how by increasing the length of the rails and the installation of additional support elements and connection of several such compartments in a rigid or flexible construction. However, the length of the first hardly advisable to take more than 4-5 m, otherwise, it will have to do is too strong and therefore heavy. The width and height of the entire structure does not have to be large to ensure the possibility of movement in the woods.
To begin, obviously with the design of the track — supporting element, and selection of its engine. The starting figures include data for drive trucks electrofly: the power of motor is 180 watts enough to be moved horizontally 500 kg of cargo at a speed of 1.2 km/h Voltage of 6 V or 12 V can be submitted directly into the guide: it is safe, and leakage energy in water is small.

Fig. 1. Diagram of a cross-country cottages-tent:
1 — the boat-the float hull; 2 — rigid sleeves (e.g., of duralumin area); 3 — pillar; 4 — electric motor; 5 — reducer; 6 — inflatable pillow; 7 — clamping roller with the plate spring; 8 — a leading rink; 9, 10 — jambs and cross-beams rigidly mounted boats; 11 — lateral support wheel (swivel); 12 — shocks of the supporting wheels; 13 — the hard part of the body.
The longitudinal dimensions of the tracks should be such, that bend the rails to fit in them for at least 5 pieces, — in this case, traction will be added at the bends when the focus of the tracks into each other almost without loss. When using electric motors, the diameter of which is small, this condition allows you to place the whole propeller is not in the girth of the hull, as on the model, and between the boats of the housing in the casing, the upper plane which can serve as a table or bed.
The design of the trucks themselves may be obviously any. The main thing here is to pull and grip with the guides provided Slobodyan tracks on the vertical sections of the guides.
The model showed that when the friction engagement in order to avoid distortions of the support elements they should be four-wheeled leading or at least in the pressing rollers; the gear teeth, when the slip rollers, you can take the simplest two-Wheeler scheme. Power supply to the motors of the trucks can be made through isolated from each other the rails and sliding contacts made of brush motors.
For cushioning and propulsion as devices for its interaction with the surface the way it is best to use a simple inflatable cushion mounted on the outer side of support elements. They can be made, for example, from road or motorolleri chambers placed in strong covers.
Turns machines with one centrally located hard the engine can be carried out using rotating pairs of lateral supporting wheels or skis.
As a source of electricity for low-speed machines can use a low-power portable benzoelektrosila produced to charge batteries and power mobile cinemas, or to make such power itself, combining in one unit the engine Motorboats, moped, scooter or fuel pump multiple car generators. To compensate for irregularities of the load and the selection of different modes of engine operation it is also desirable to install multiple switchable batteries.
The mover is activated by the supply voltage on the rails. The movement on the reverse is performed by switching the polarity of the voltage.
To select various modes of operation of the engine at the lower, working, and rest, idle, part guide, it is desirable to apply different voltages: nominal and increased, for example doubled. (In the simplest case you can do one of the voltage value.) It is obvious that these parts of the guides then must also be performed isolated.
When filing on a blank part of the guide is increased tension such as from two series-connected batteries, the return of the trucks will occur with much greater speed (crossing of the motor mode it is not dangerous here, because the load and time small). Then almost all of them will be concentrated at the bottom: this will provide maximum thrust and fluidity. 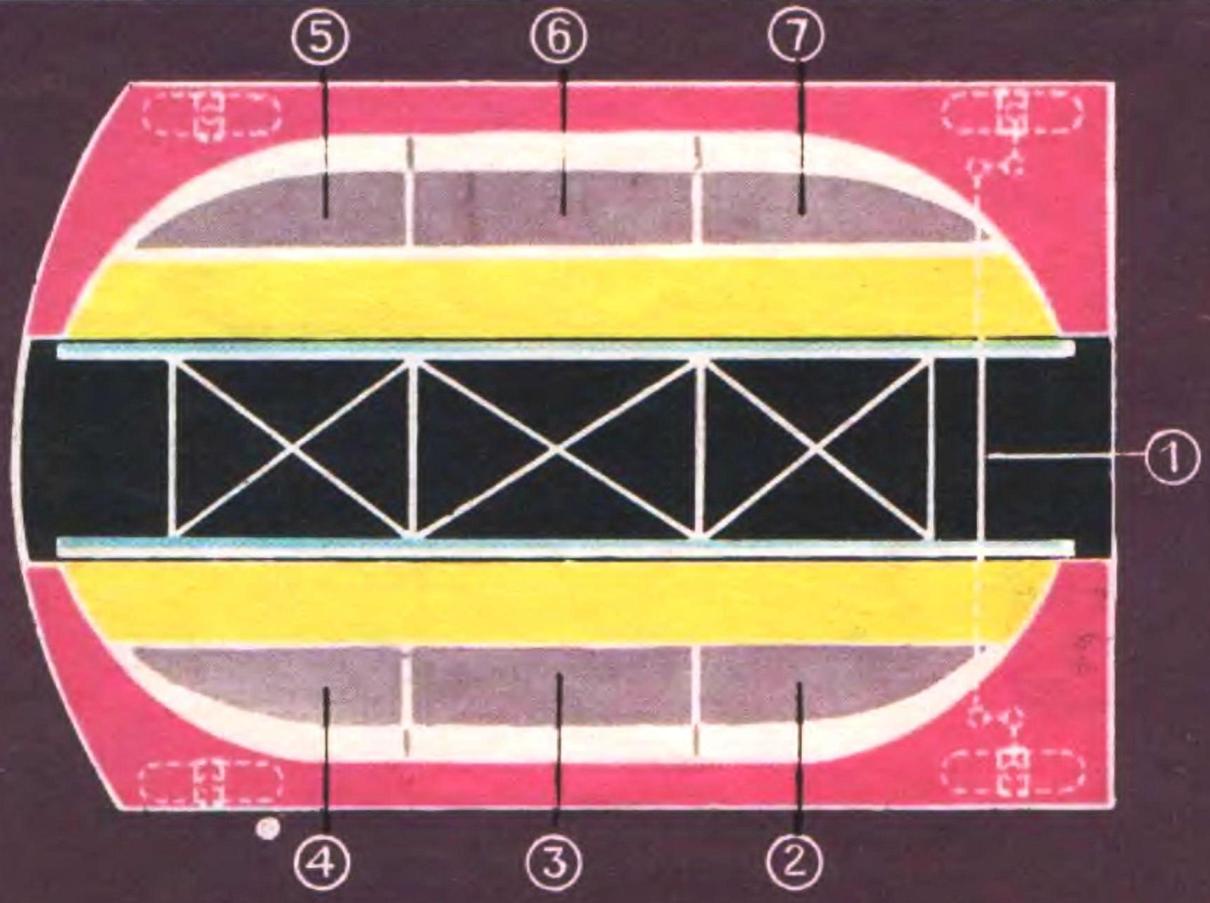 The plan is the hard part of the case:
1 — tie rod for pivoting the auxiliary wheels 2, 7 — compartments of benzoelektrosila and fuel, 3, 6 — blocks of buoyancy (foam), 4 — compartment food and equipment, 5 — compartment of the battery and the tool.
With a weak resistance movement (smooth road, gentle slope, good slide) you can go to the most economical jerky nature of the movement. For this is enough for the working part of the guide to apply is increased, and the idle — rated or reduced voltage. In this case, almost all the tracks will focus on the blank part of the guide, and by working they will move in turn with great speed, giving the car a vigorous push.
On a gentle descent all the tracks can be stopped at the upper part of the guide by lowering the voltage on them to zero: the descent will be carried out on the supporting skis or wheels without loss of energy. In the same way can be carried out and tow your car tent.
On a steep descent when you need braking, the voltage can be removed, on the contrary, with the working part of the guide, and the blanks left by the nominal, reduced or increased. The truck with Noah difference frequency will go to the working part of the guide and coming into contact with the surface of the slope, forced to work their electric motors in the mode of the generators charging the batteries at the same time carrying out effective braking of the machine. Of course, to make this possible, not only motors, but the gear must be reversible, that is, not to be a worm or wave which, it would seem most appropriate to apply for large gear ratios. It is possible that the propeller can turn into a source of electricity to charge the battery and when attaching the car-tents on a fairly fast river against the current, for example, during night stop.
The displacement of the boat hull and the total weight must be designed so that the lower part of the guide was in the water, and the top — above the water. In this case the supporting elements will work as the blades of the oars, and the solid disks are rotating wheel — like steering wheels that ensure efficient movement and turning in the water. The transition from the movement by land to float and back does not require any preliminary preparation.
These are briefly the main considerations for the construction and possibilities of using Amateur designers only one, simple, option mover truck with two rigid guide along the longitudinal axis.
It is hardly possible even to enumerate all the other variants of this engine. Yes, and we should not deprive the interested reader fun to make up and manufacture has not yet made a car. Specific implementation, the number, configuration guides and supporting elements, connection rails to the body and each other type of engines, propellers, speed modes support elements and devices of their interaction with the surface or environment, the ways of energy transfer on the support elements and management are the parts, changing and combining various options which you will be able to get the car, climb mountains, striding on the moor, racing across the steppe (using high-speed linear induction motors with rotor plates of the support elements for air or magnetic levitation), floating and even flying.
And these machines will be.
Because in the age of the most varied and complex machinery, it is absurd to rely on the ancient wheel or caterpillar: is it time to abandon them or leave them where they are supposed to be — on the tarmac road.
It’s time to move on. The path is open.
Who will step first?
L. SUKHANOV, engineer