When winter comes, most cyclists have to put their cars on a trick. Snow and ice make the bike unusable for trips: narrow his tires are not suitable for winter conditions — it’s not skiing. Why not actually put skis instead of wheels? Then roll the machine can be operated all year round.
This design created and protected by the copyright certificate № 971374. The device was reflected in the title: willigerod. It is possible not only to move down from the hills, but after the skiers Hiking in the snow.
Willigerod, a General view of which is shown in figure 1, is made on the basis of the standard bike. Its main elements: frame, front and rear supports, brackets, front steering ski and a rear supporting ski-followers.
Frame — from a sports bike “Start-highway”; it only replaced the connecting rod hub. Suitable frame road bikes and children’s type “Eaglet”. In this case, the specified dimensions of parts necessary to make adjustments. 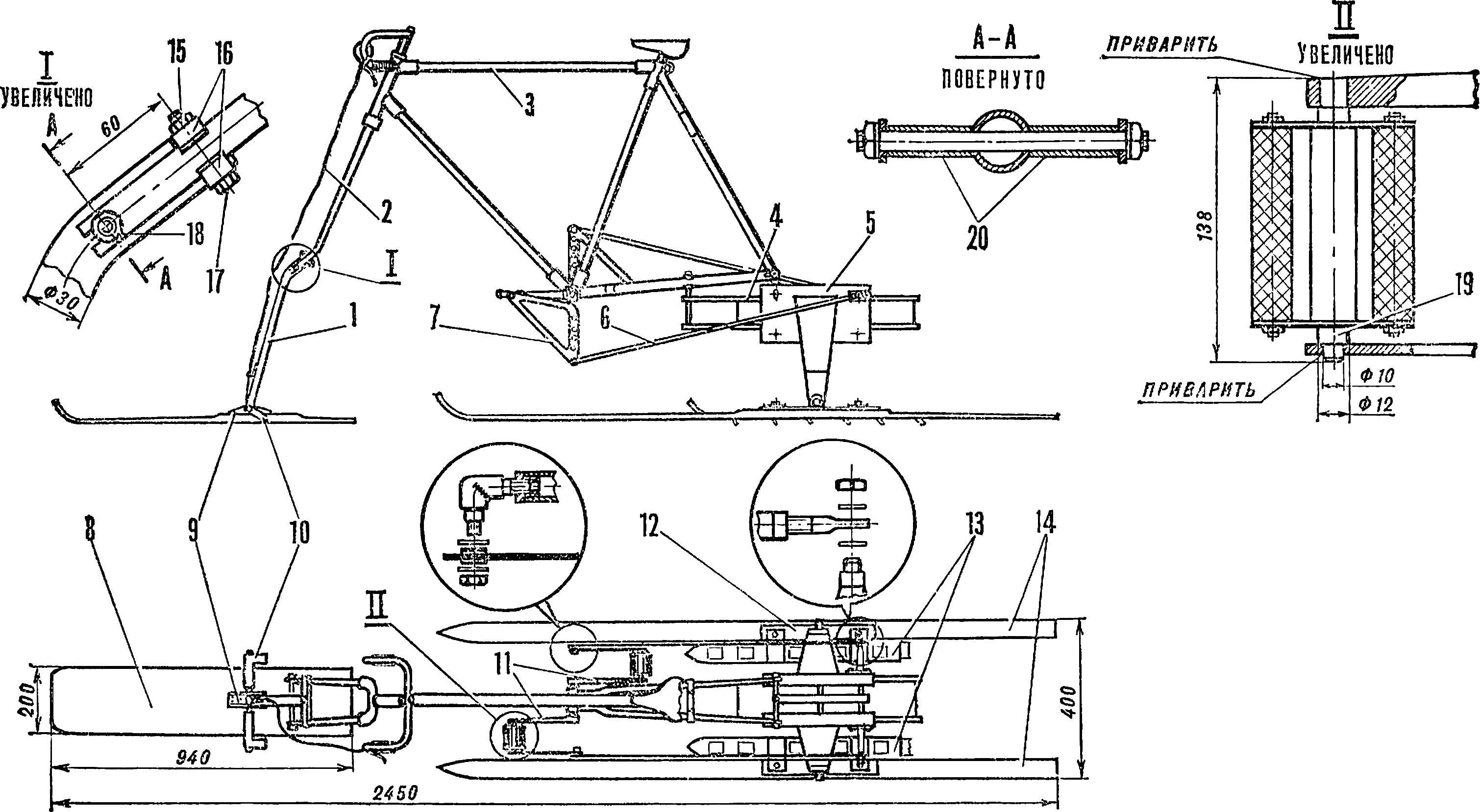 Fig. 1. Willigerod:
1 — front support 2 — lock brakes, 3 — frame, 4 — bracket 5 — rear bearing, 6 — rod, 7 — lever, 8 front ski, 9 — front panel, 10 — brake, 11 — rod, 12 rear panel, 13 — ski-followers, 14 — the back of the ski, 15 — nut 16 — plate 17 — bolt 18 — axle 19 — the pedal, 20 — bushings-spacers.
Replacement connecting rod node is that instead of the usual install connecting rods with elongated axes of the pedals: here the levers are mounted ski-pushers. Standard details for new rods can be purchased in stores, spare parts, or use from the old bike. The threads in the pedal hole crankset worn down, they stick and it is welded to the axis of the steel rod Ø 18 mm. After installing the pedals on the axis of the set and is also welded to the levers. They should be oriented so that the line along which the openings were perpendicular to the rods and passed through the axis of rotation. This arrangement promotes the most efficient allocation of effort when riding. The material of the ski levers-Cam followers — steel sheet thickness of 4 mm, welded in them sleeve can be cut from a suitable tube.
Front support of willigerod, which is a curved metal tube Ø 30 mm, is attached to the steering fork in two places. The main burden falls on the axis of the steel rod, whose ends are tapped M8. Two sleeve spacers of a metal tube fixed support in the middle fork. To exclude side shifts the ends of the clamping fork plates are made of sheet metal with a thickness of 2 mm, recurved.
The front support is attached to the ski at the axis of the steel rod Ø 8 mm on both ends which drill hole Ø 1,5 mm under the cotter pins. The axle passes through holes in the support, the lining and the brake. Strip of sheet metal 2 mm thick; on the ski it is secured with six screws.
The brake consists of two elements, having in cross-section G-shaped and located on both sides of the lining. To bring the brake into action is the lever and the brake lock the rear wheels. Its braided throttle cable rests in the corner, secured by two screws M3 ka front support.
In order to villagewide you can ride on groomed track, but in virgin soil, the specific pressure on the snow, must not exceed 16 g/cm2. Based on this value and the maximum weight of the rider, calculated bearing area. Due to the design of the Bicycle frame, the front and rear skis have the same load. Thus, the bearing area of the front of the ski willigerod intended to be virgin, must be equal to the square rear.
The front ski is made of boards. To make it possible for technology, not just described in the “Modeller-designer”. For the best sliding to the bottom surface of epoxy resin glued plastic.
The tree is not the only material for romance. Can be used sheet metal, 2 mm thick, for example, duralumin. In this case, it is necessary to provide stiffening ribs, for example corners, installed on the studs.
The design of the bracket willigerod clear from the picture. Guides him from the metal tube Ø 16 mm, bent in the shape of the letter p. Material spreaders — steel wire Ø 4-5 mm. the Horizontal bar of the same bar; they are welded to the struts and prevent deformation of the guide with the occurrence of bending forces. Studs machined from steel rod Ø 10 mm. Plate made of sheet metal with a thickness of 5-7 mm. In the inclined recesses in which are clamped the pipe bottom fork of the Bicycle frame. 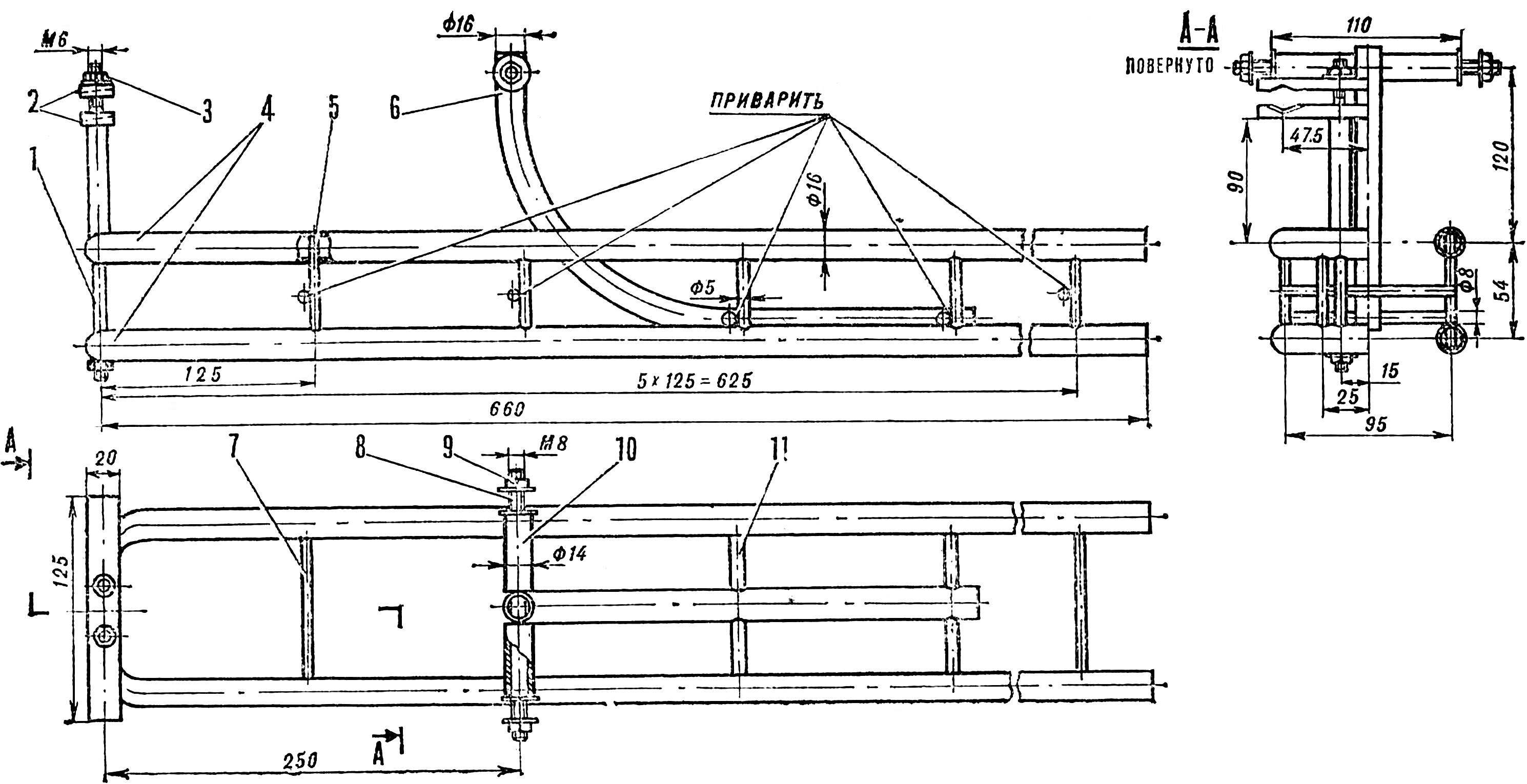 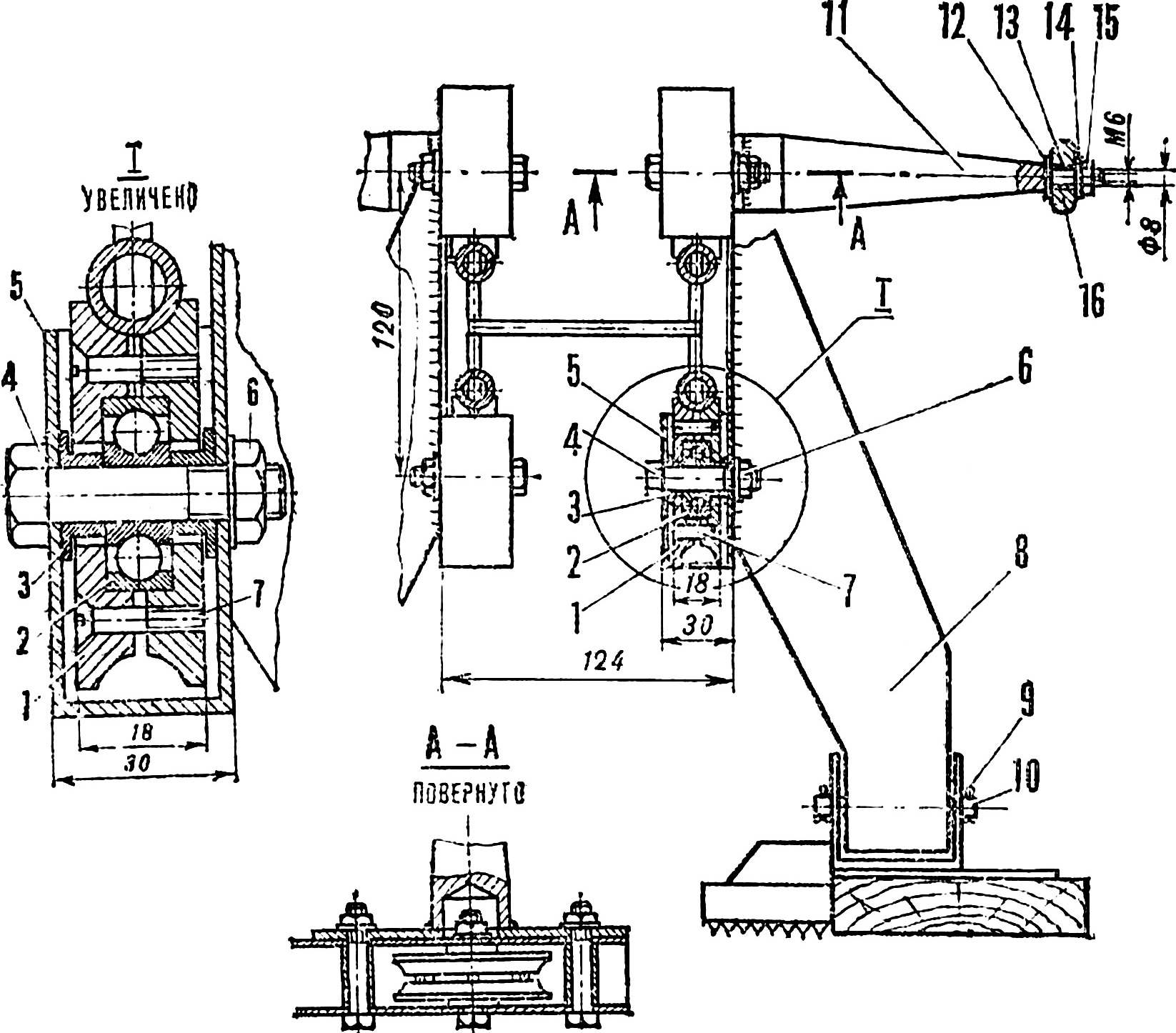 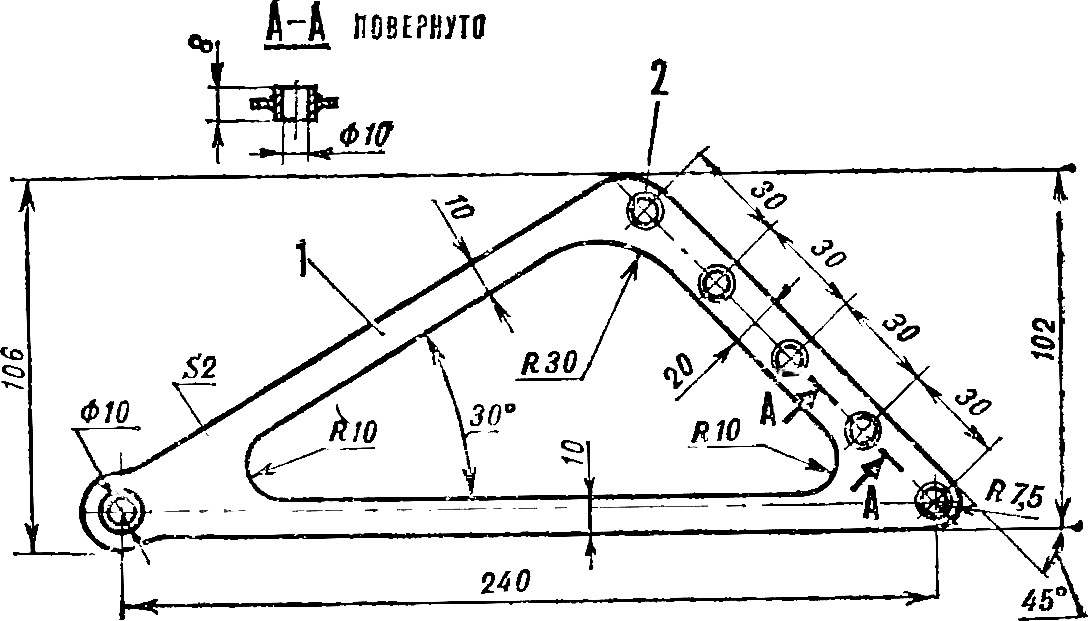 Fig. 4. Arm Assembly:
1 — lever 2 — sleeve.
Console bracket is made of metal pipe. Set the console ka two steel crossbars-bars Ø 8 mm, welded to the struts. In its upper part is drilled a hole for the axis, manufactured and installed in the same way as on the front bearing.
Box back support is made of sheet metal with a thickness of 2 mm. of Their principal dimensions In mm. 280Х185Х30 boxes placed on four rollers, each of which consists of two halves connected to each other by screws M6. Set the rollers on bearings No. 200. Bushings-spacers, machined from steel rod Ø 18 mm, prevent the bearing roller from the lateral shifts. Material for the rollers can be used not only steel, but aluminum or bronze.
To eliminate the possibility of a descent of the upper rollers from the rails, it is necessary to provide possibility of adjustment in height. To do this, the holes for the upper bolts it is better to make an oval.
Console rear strut their bases are attached to boxes with M6 bolts. To avoid deformation of the walls of the box when tightening the nuts between them, it is advisable to introduce a sleeve cut from a metal pipe. Console machined from bar Ø 30 mm; these are welded plate thickness of 2-3 mm, in which holes and inserted the bolts.
Front rear supports, which is a welded construction made of sheet metal with a thickness of 2 mm. Preferred method of attachment of the strut to the box — welding. But you can also use a threaded connection on the four M6 bolts.
Axis and the front support, made of steel rod Ø 8 mm with holes for cotter pins.
Material lining the rear of the ski is a metal sheet with a thickness of 2 mm. they drilled 12 holes Ø 3 mm and 2 holes Ø 8.5 mm, and chamfer the latest chiseled bottom. Smaller holes are designed for screws with which the pads are fixed to the ski, more for M8 screws with countersunk heads. After welding the heads of the screws M8 welds cleaned.
Ski-pusher (Fig. 5) made of sheet metal with a thickness of 1-2 mm in the form of a box with a pointed and bent up front. All the elements of the ski are joined by welding. At its upper and lower surfaces are cut out of the window. In the upper Windows are provided stops the rotation of the cleats. The latter are made of metal plates with a thickness of 10 mm. They are mounted on the ski, hinge, axis — steel rods Ø 4 mm, the ends of which are drilled holes Ø 2 mm and a depth of 3 mm. After it is installed on the ski of their flare.

Fig. 5. Ski-pusher:
1 — skiing, 2 — axis, 3 — grouser, 4 — comb 5 — bracket.
To grundsatzen M3 screws that attach the comb from a sheet metal thickness of 2-3 mm. On the combs, and grantsearch, cut the teeth are triangular in shape. The angle between the forming of the top is 60°. The height of the teeth of the cleats — 6 mm, combs — 4 mm.
Brackets, attached to the plate by M8 screws, ski-pusher is connected with the supporting ski, the plane of the slide which must be below 5 mm.
As a carrier the rear of the ski, we use the standard “Forest”, they are only slightly cropped.
Ideally, the functions of the pusher and the base of the skis have to carry one item. This design can be recommended, for example, for children with willigerod.
For the manufacture of rod connecting the lever with the console back support, used a metal pipe of Ø 16 mm and a length of 600 mm. At its ends are mounted with round nuts M8 flange. They can be machined out of rod Ø 15-16 mm. to eliminate the cranking and axial shifts, the nuts must be secured, better welding.
With the lever rod connects an l-shaped bolt, bent from steel rod Ø 10 mm; bending place obvalivautsya (before you bend the rod, place the bend saw a round file, the deepening). The part of the bolt, which enters into the sleeve on the arm, is processed identically to the console end of the back support. On the other threaded M8.
Console rod connects the adjusting bolt M8; hole it rastaquouere to Ø 10 mm. If the hand is not standard, make it yourself, privaris to washer stud or grub screw.
Technique ride villagewide kitsch is no different from a Bicycle. Moreover, since it is more stable bike, then learn to control it much easier.
When pedaling the rear feet with skis, moving on rollers along the guide rails of the bracket, making a reciprocating motion. When ski-pusher begins to slide back, combs clinging to the road surface and the lugs coming out the bottom of the Windows, rested in the snow. Slide stops and willigerod takes a step. Its length corresponds to the diameter of the circle described by the bushing, which is inserted l-shaped bolt. When sliding forward lugs are hiding in, ski-pusher. Sticking them on the snow is thrown through the upper Windows. Limiters eliminate the ceasing of the cleats.
On villagewide even untrained people can easily reaches speeds of 8-10 km/h of Course, for the trained athlete is not the limit. If someone would be hard to pedal, it is possible to shorten the step. However, after that drop the speed, but will decrease and effort.
The maneuverability of willigerod small: turning radius is 2 m. Therefore, it is better to travel on a relatively flat and straight tracks on the frozen river beds, channels or clearings.
Each occurrence of willigerod is a constant concern. People come up, ask about the design and capabilities of the machine. Many people light up the idea to build such a snowmobile for yourself or your children. I hope that this publication will help them to produce their own willigerod.
L. GORYNSKI, A. KOROTKOV