Weather did not spoil the young glider pilots. The sky is high and blue, as it often happens in Lithuania at this time of year, gray and low down over the green field airport. Strong gusty wind ruffled over the hangar zastiranny rain striped “stocking” of the determinant of the direction of the wind. Chief judge of the competition Mr. Canario and then looked at the clouds, thinking, not whether to cancel flights. And even newsreel cameramen from Perm, arrived to make a documentary about his countrymen, the young athletes from the city of Lysva, are unable to resist the complaints about bad weather, because color film, as is well known, loves the sun…
And yet V USSR championship in gliding among boys was a success! Not only for the winning team from the small Lithuanian town of Kedainiai, where the aerodrome, then this is not, and the guys use a normal field that is allocated to them under the airfield farm. Managed for the owners aviation technical sports club of the city of panevėžys, brilliantly organized competitions and expose their two teams, one of which took third place. Of course, managed to champion — smiling high school senior girl Gintare Bukauskaite and her coach Isasa of Rimkevicius. Appreciated it and the audience — lovers of air sports. Here, as in the detective, lined up all the laws of the genre, until the last exercise it was impossible to determine the winners. Leading teams closely followed one after another, in the final swapped places. A surprise was the fact that “silver” was won by the team from the city of Arkalyk in the Kazakh SSR, because this region is still “Terra Incognita” on “planar map” of the country.
Even those who have not borrowed prize-winning places (in the competition was attended by 46 young athletes from 12 teams of the RSFSR, Lithuania, Armenia, Kazakhstan), was satisfied. The guys were able to share even a small flight experiences, make friends, and most importantly — to fly. 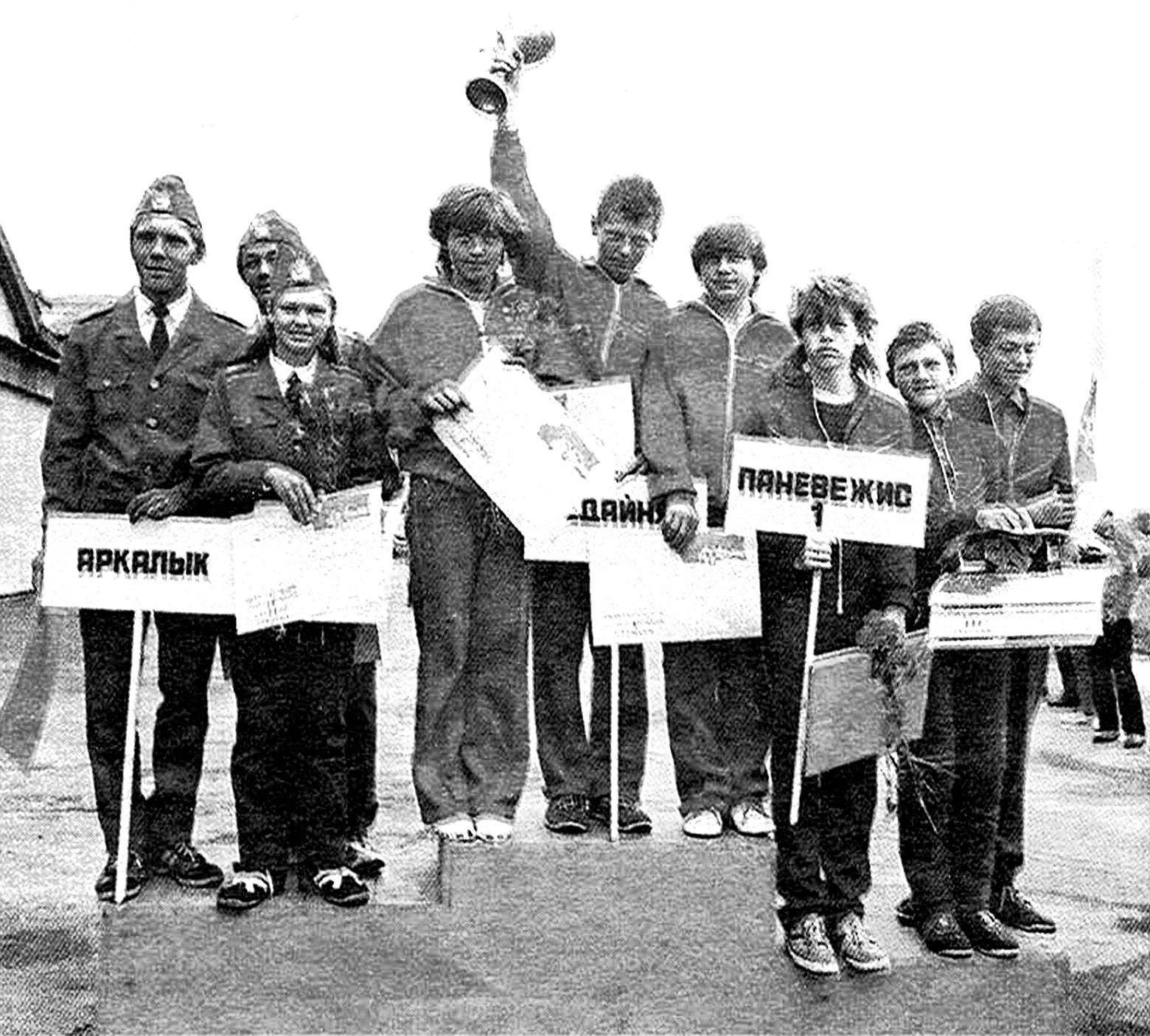 On the podium — winning team.

The cadets UPS must fully understand aerospace engineering, to resolve in the process of operation failure.
Competition in Panevezys was not only a celebration, kind of childish glider festival. They highlighted and problems, which, as in the adult gliding, have accumulated a lot. One of them gliders for beginners. “Strazdas” — they are equipped with school of young glider pilots at flying clubs — not without drawbacks, and the main thing — prohibitively expensive. They will cost 4 thousand rubles, although expensive for the airclubs of DOSAAF, prevents development of children gliding in breadth, to go to schools, Houses of pioneers, stations and clubs of young technicians… Young athletes from the city of kėdainiai, the happy owners of three gliders, two “Strazdas” gave the city in the face of a chemical plant imeni 60-letiya SSSR. But you must admit that, unfortunately, not everywhere there are such generous patrons. New mass glider LAK-16 free from many drawbacks of its predecessors, but its remotepoint leaves much to be desired. Minor damage easily derive paritel ‘ down. The competition in Panevezys none of them reached the final. Proved to be excellent glider talented Lithuanian designer Bronica Oszkinis — BRO-23. It is easily repaired, well run, well fly. Its construction cost the club four times cheaper. However BRO-23 exists only in two copies. It seems, to build a glider yourself is possible not only in Panevezys. Anyway, the time has come to release the winged machines for beginners in the form of a set of semi-finished products. And the price of this set below and a taste for technical creativity instills in children. And the desire to build gliders, airplanes, create, right, worthy of the same respect as the desire to fly. 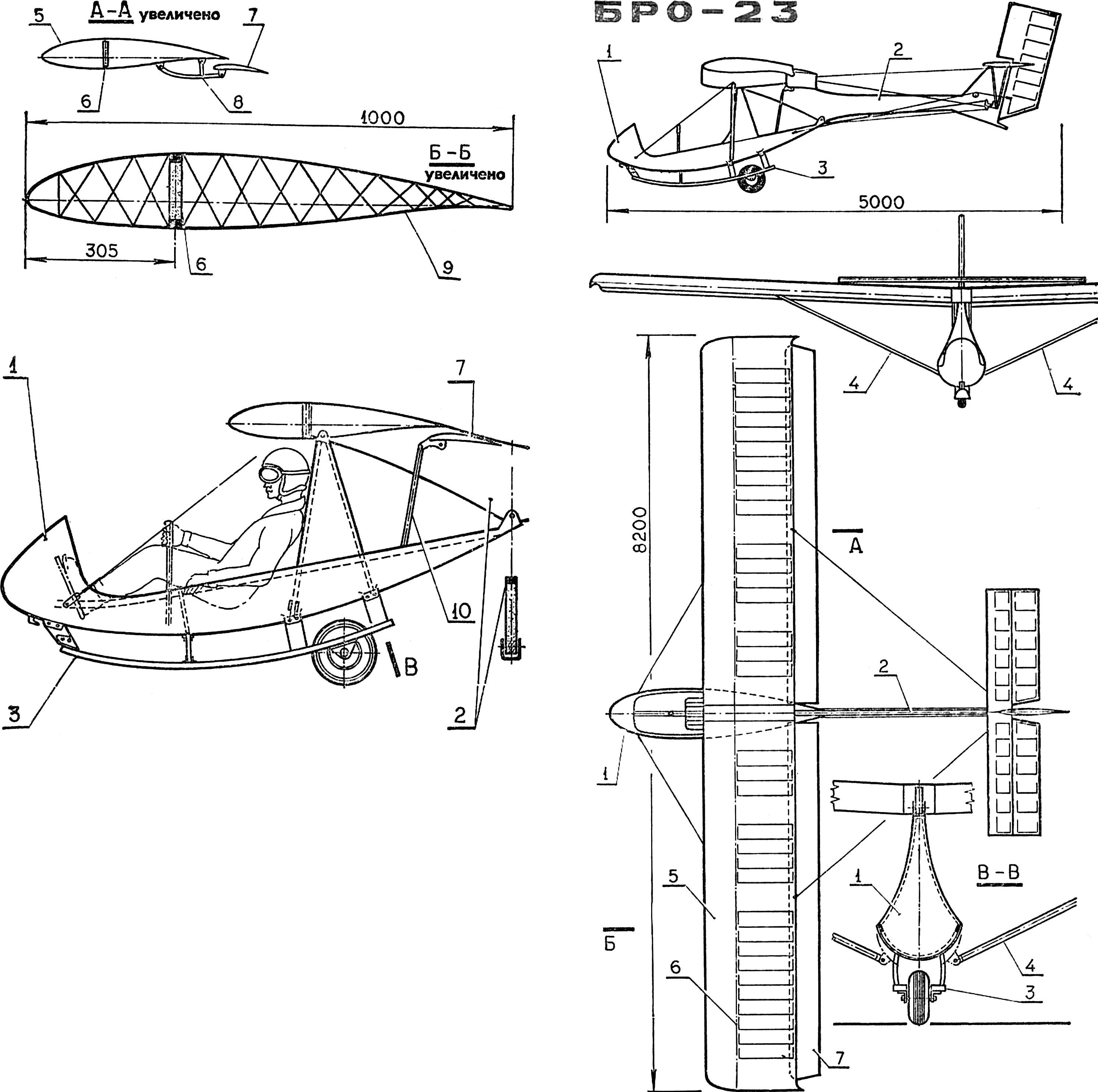