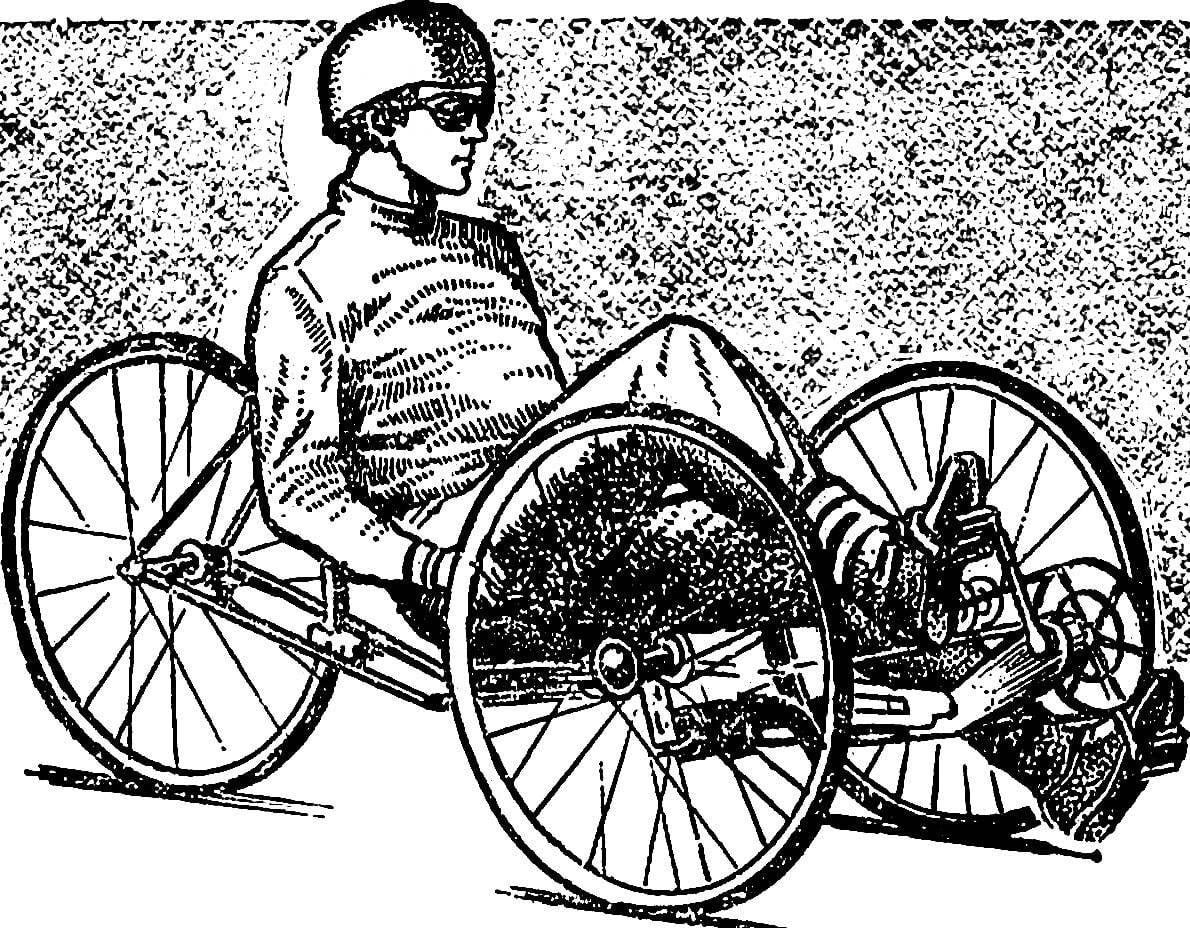 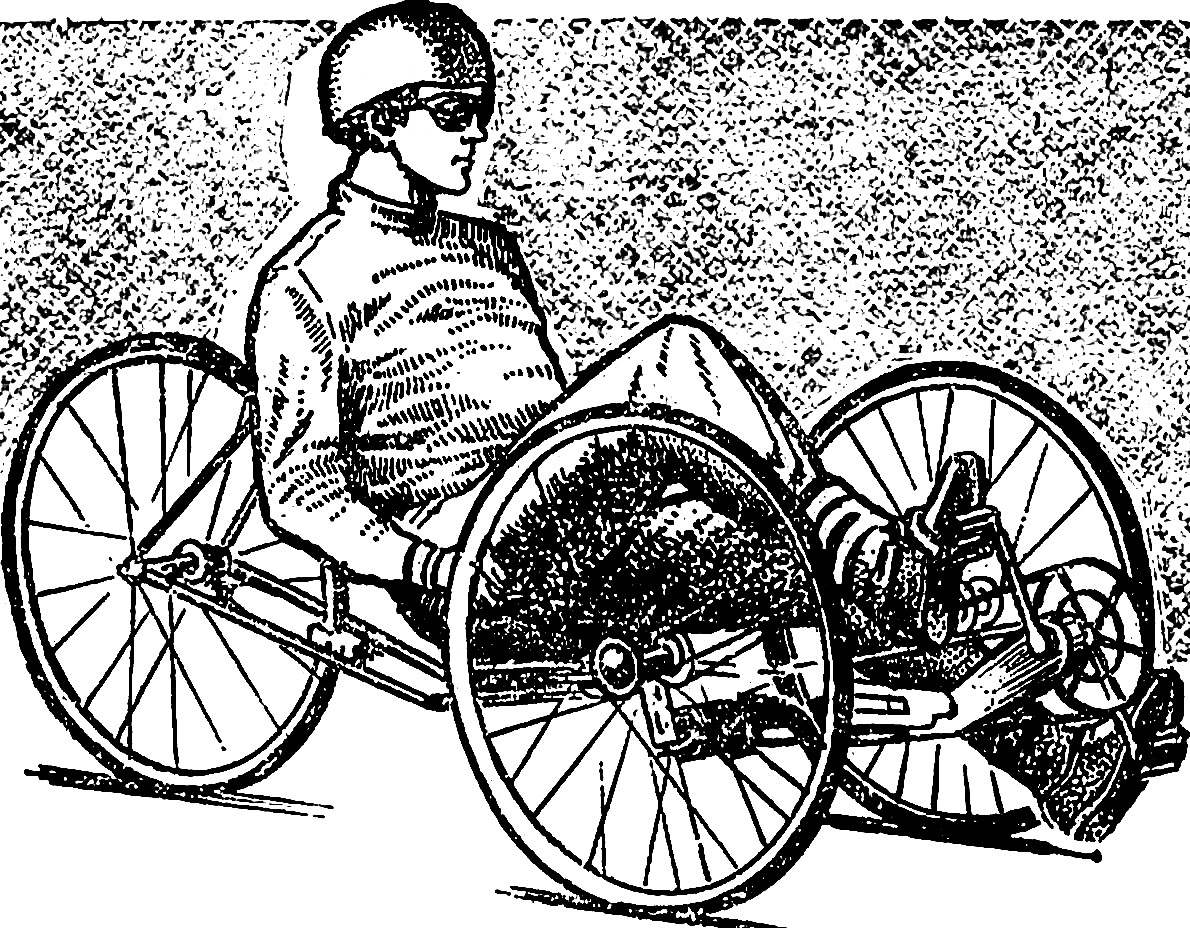 On the velomobile today know everything. Mention them in the headlines. Problems biomodov discussed in the popular TV show “you can”. And finally, cars with a muscular drive — the constant focus of our magazine: the trends, the most interesting designs and the makers of these devices repeatedly told on the pages of “M-K”.
Every year the growing popularity of this new direction of scientific and technical creativity. Increasing the number of its adherents. Striking confirmation of this was held in August of this year, the festival “the Golden ring-87”, organized by Moscow club of enthusiasts biotransport.
An extensive and varied programme of the festival of velomobiles. It included an exhibition of designs, performances, dvadtsatikilometrovaya race, a speed race for the record speed, and most importantly — the scientific and technical conference, which was held a serious and detailed discussion about the problems of development of muskurahaton, exchanged views on promising areas of the design. Completed the game in Moscow enthusiasts biotransport 880-kilometer run on the route “Golden ring”.
What structures was not at the festival! They differed from each other according to the number of seats and the number of “engines”, according to the number of wheels, which wheels leading; met open carriages and light cabins; one meant for business trips, tourism or sport. And yet, from the variety of designs to clearly distinguish three groups of machines: multiple tourist, single sport, and experimental vehicle for testing layouts, types of transmission, and ways of planting.
Transport with a muscular drive is known to be different from any other that operates normally at the limit of its capabilities, and especially energy. Therefore, the primary task of the designer of the velomobile is to avoid any inefficient losses — aerodynamics and friction. Some velomobiles, creating their cars, sometimes pereprodaet the way in which muscle force is transferred to the propulsion of the vehicle.
Analysis of a homemade recumbent gives you the opportunity to make a number of disappointing findings on the level of development of part of the development. Many have insufficient rigidity. This primarily relates to four-wheeled machines. The reasons are clear: the design of the rigid frame for four-wheeled machine requires special design techniques, increasing the weight of the device. That’s something I try to avoid their creators. Evident by the fact that most homebrew uses standard bike parts, it is not designed to work in such machines. Not by chance the best muscularity equipped with improvised wheels with bushings almost twice as long as standard, or with developed the hub of large diameter. Such wheels can withstand considerable lateral load — constant companions of velomobiles. Well, what about the tires? They’re also not designed to work in conditions of lateral loads, sometimes ripping off the turns the tires from the rims. All this must be considered when designing self-propelled vehicles that have to move not only the bike lanes but on roads where safety is paramount.

Quadruple recumbent enthusiasts the Minsk automobile plant.
Poor braking system and many velomobiles. But they should be no less efficient than cars and motorcycles. And if we are talking about traffic safety, it should be recalled that each musculorum needs to withstand not only static loads occurring in steady state motion on a horizontal surface, but also dynamic, appearing when breaking at high speed obstacles when driving on bends and when braking.
A few words about energy basics of designing vehicles with a muscular drive. Simple calculations show that the speed of 5-6 m/s (about 20 km/h) energy consumption in the movement of the velomobile with the midsection 1m2 on a flat surface not too great. For this purpose, the drive power should be a little more than 100 watts, which is quite capable of one person, much less two. But we need only increase the speed in two times — up to 35-40 km/h, or occur to the counter wind about 5-6 m/s, as the energy consumption will increase dramatically — now they will be 500 watts, and this power alone, even can “give” a very short time, tens of seconds. The same power you have to develop and when driving on minor — only ten percent — rise with a speed of 5 m/s (18 km/h).
That is why it is so important to each designer to fully imagine the energy aspects of the design. As shown by the Moscow festival, most of the authors of developments take into account the whole complex of the problems facing them. And many have successfully applied for the festival cars interesting design finds, valuable engineering solutions. 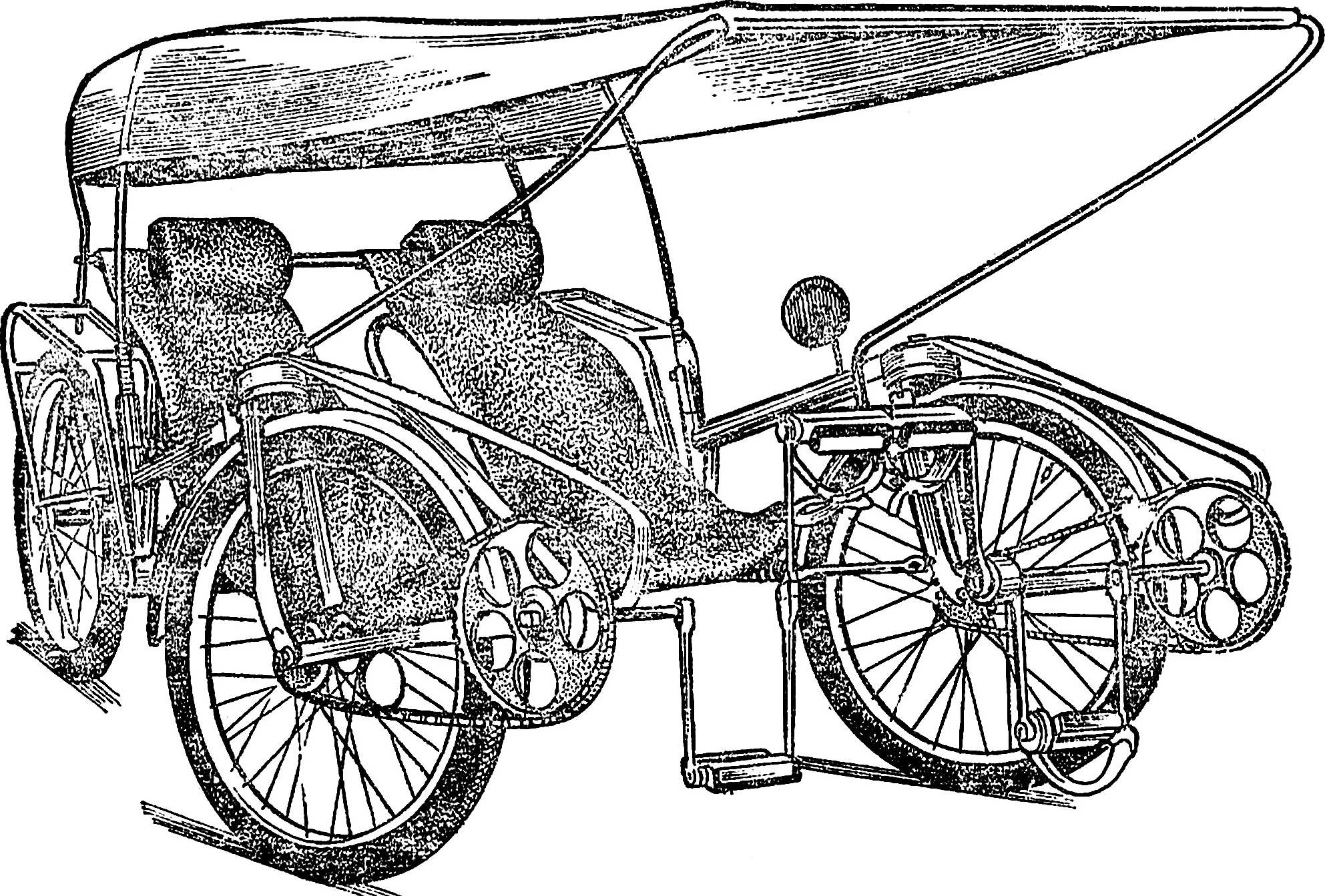 This double welfate created by E. Kargina from the city of Kazan, has the original front wheel drive: the crankshaft and the foot pedal actuator is here at the same time and the transverse thrust of the steering linkage.
Such a find was the rigid spatial farm-the fuselage of the velomobile “Romantic”, created by young designers from the city of Yoshkar-Ola. The use of lightweight welded tubular farm allowed it to accommodate both crew members, authorities and transmission parts and the location of the crew by the “tandem” reduced midsection of the machine.
Among the original decisions can be attributed to the wheel of high hardness and strength, designed by Muscovite Vladimir Nikitin for his sport recumbent. By the way, this recumbent holds the record speed in the hundred-meter land — 46.7 km/h. This velomobile is, perhaps, the most rational design — lightweight, durable, designed taking into account the requirements of ergonomics. And an almost unlimited choice of gear drive in relation to specific driving conditions allows to develop a speed close to the theoretically calculated. 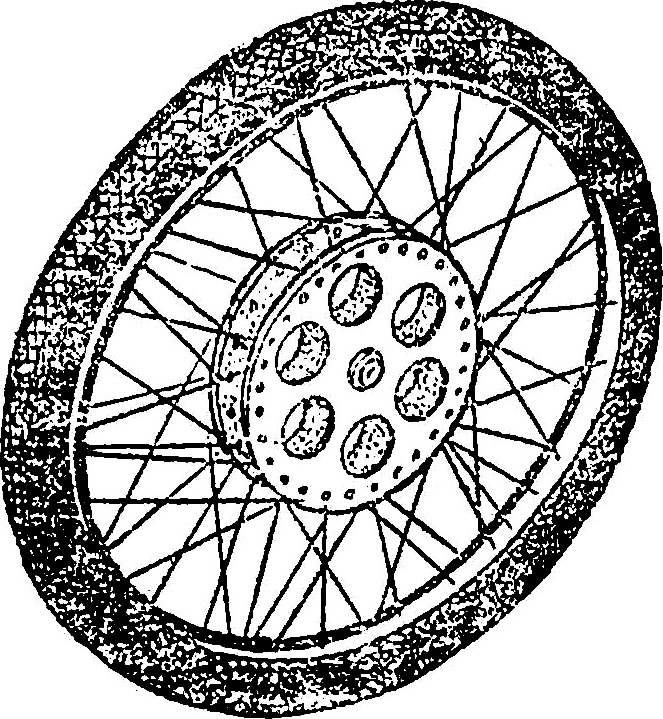 An example of a well-composed improvised wheel of high hardness.
Very interesting family recumbent, arranged according to the scheme 1+2 (an adult and two children). He created a Muscovite by J. Abdukarimova. This three-wheeled carriage, the rear “bridge” of which two children’s bikes (of course, without the front wheels) and the front wheel of a Bicycle “Kama” to the chain multiplier. Such transfer for many pedal cars-drive front wheel has already become traditional, although the use of it and brings some difficulties, in particular when making turns. 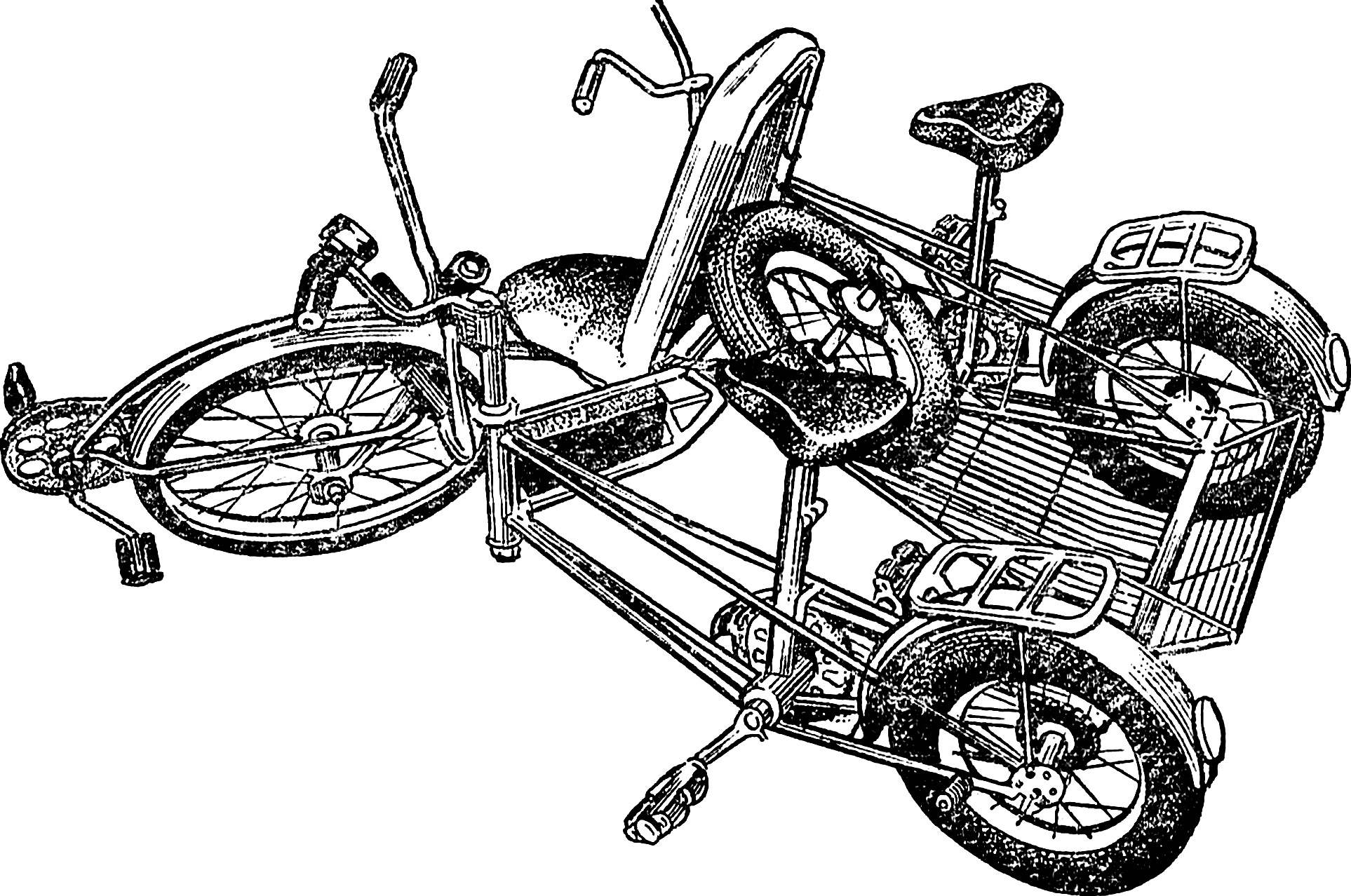 Family triple (adult and two children) walking muskurahat design Muscovite J. abdukarimova.
A lot of controversy in the homebrew caused the use of fairings. Many rightly argued that the positive effect will only be the case if the fairing is designed to meet the requirements of aerodynamics and ergonomics. Neglect of these laws will not allow you to create “aerodynamic” shell, and it can only serve as an awning from a rain and a headwind. According to the authors of the best devices, the development of any machine must begin with the study of the optimum fairing shape, and then just “snap” to it suspension, driveline and control nodes. 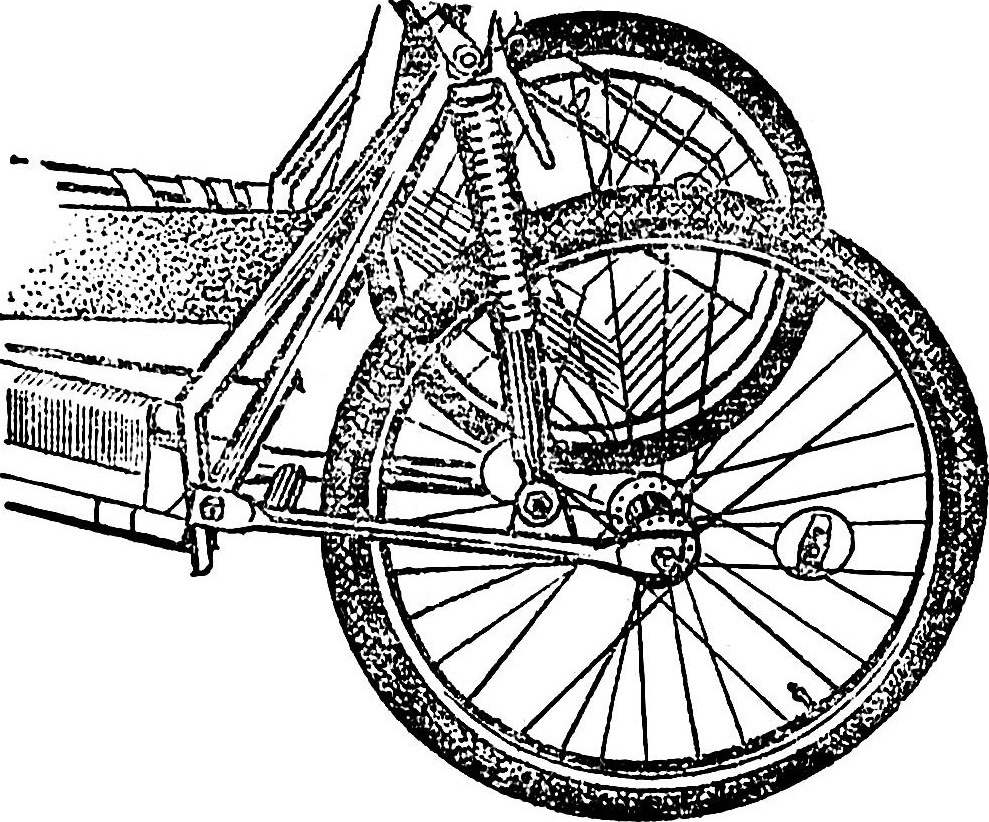 Increasingly, designers of velomobiles are used for wheel suspension spring shock absorbers.
Many interesting design solutions can be found on the exhibition of velomobiles. Among them are effective and derailleurs and lightweight powertrain, and equipped with shock absorbers wheel on suspension forks-levers, and easily collapsible apparatus…. And this is understandable — in motion enthusiasts biotransport currently, the process of accumulation of design experience and testing of the various nodes velomobiles, and most importantly — intensive searches of the concept of vehicles with a muscular drive.
I. EVSTRATOV