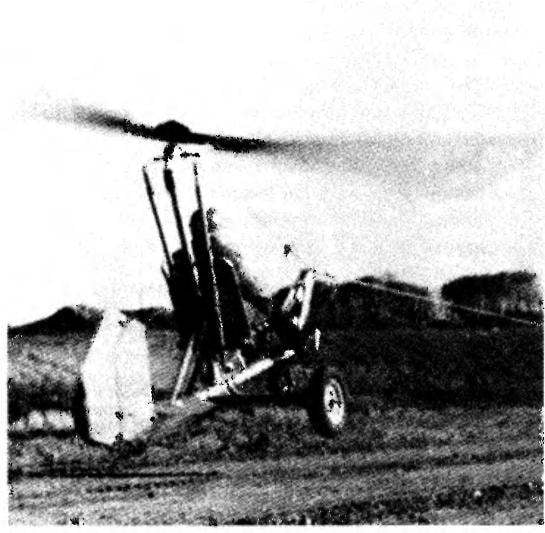 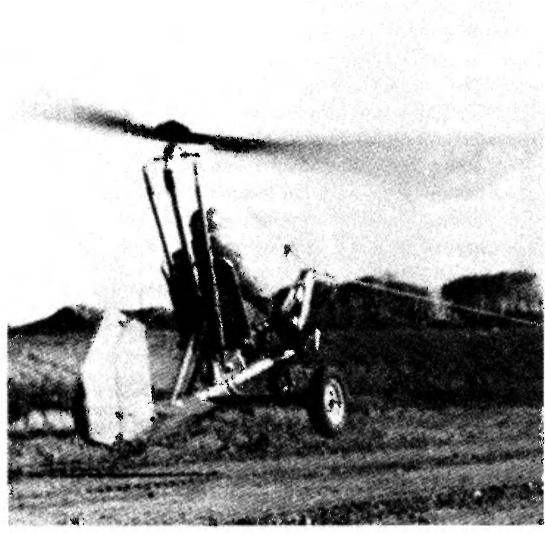 Who as a child dreamed of becoming a pilot, the conqueror of the fifth — the ocean air! A romantic nature will not abandon his dreams and in adulthood. And they can implement it: currently there is a wide variety of aircraft, which can fly even Amateur pilots. But, unfortunately, if these devices are prefabricated and offered for sale, the cost of them so high that most of them are practically inaccessible.
However, there is another way — independent production of reliable and relatively simple aircraft. For example, the gyro. In this article the description of just such a design that almost anyone involved in technical work. To build a gyroplane does not require expensive materials and special conditions —enough space in the apartment, just family members and neighbors did not object. And only a limited number of design details need turning.
Enthusiast who decided to make the proposed aircraft, I would recommend at first to collect the gyro-glider. He rises into the air by a tow rope attached behind a moving vehicle. Height of flight depends on the length of the cable and may exceed 50 meters. After climbing to such a height, and reset the cable pilot gyroplane is able to continue the flight, gradually decreasing at an angle of about 15 degrees to the horizon. Such planning will allow the pilot to develop the management skills required in free flight. And to them he will be able to start if installed on the gyro-glider engine with a pusher propeller. However, no changes in the design of the aircraft is not required. With an engine the gyro will be able to reach the speed of 150 km/h and climb to a height of several thousand meters. But about the power plant and its placement on the aircraft later in a separate publication.
So, the gyro-glider. The basis of his three dural bearing component: keel and axial beams and mast. On the front of the keel beam is steerable nose wheel (from the little micro-car sports-card) are equipped with braking device and the axial ends of the beam — side of the wheel (of the scooter). By the way, instead of wheels you can install two float if there are flights on tow behind a boat. 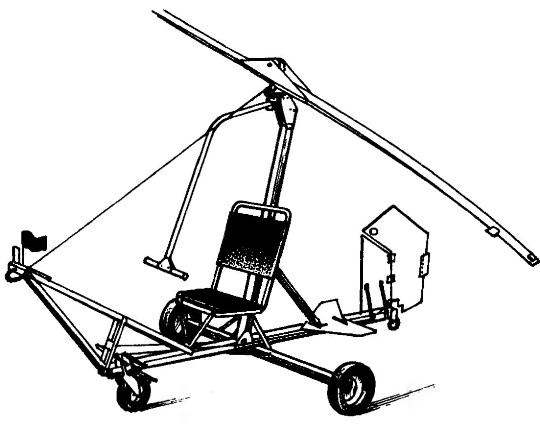 General view of the autogyro 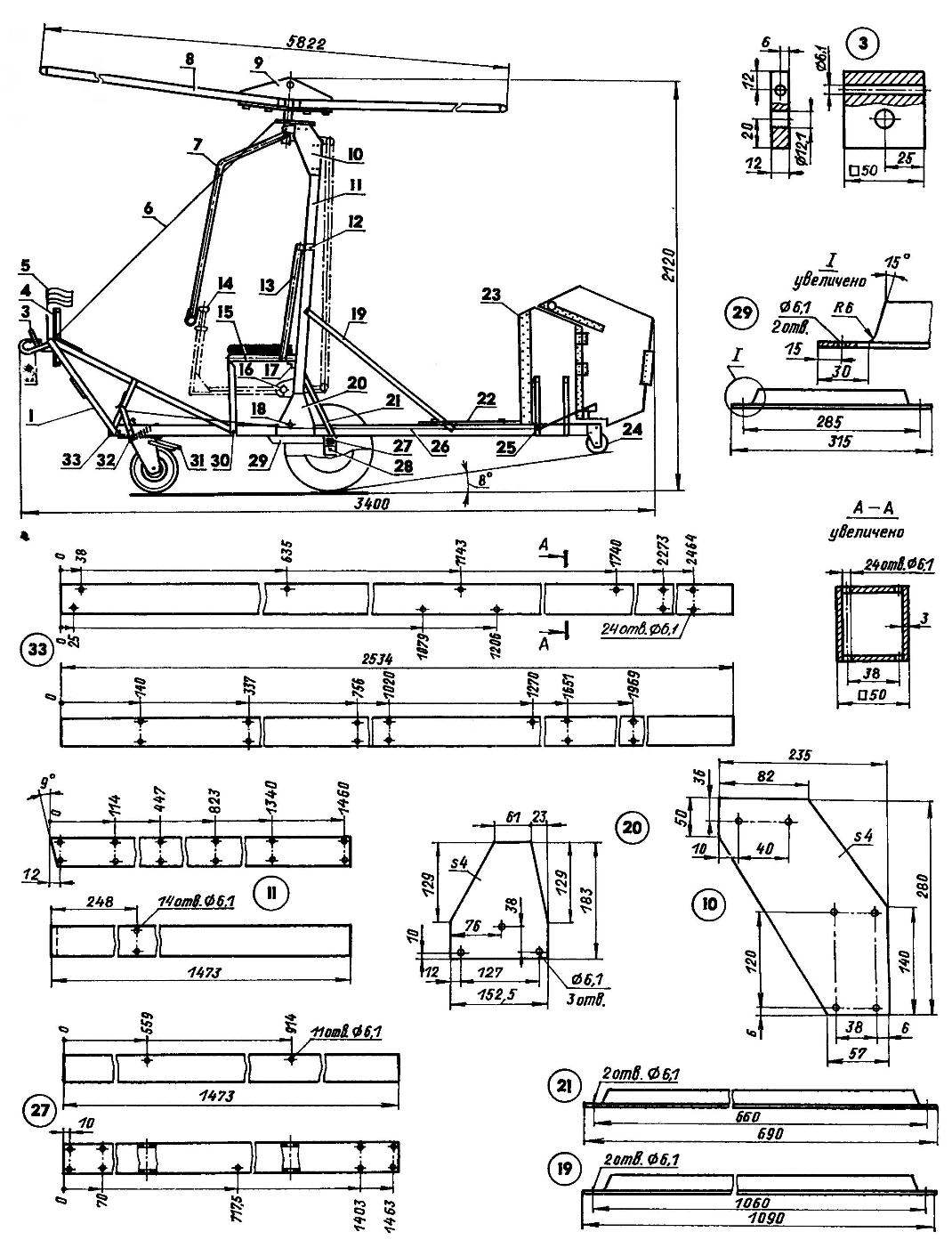 The layout of the autogyro:
1 — farm; 2 — tow hook; 3 — yoke mounting the towbar (D16T); 4 — airspeed indicator; 5 — the indicator side of the demolition; 6 — stretching (steel wire rope d2); 7 — handle; 8 — blade rotor; 9 — rotor head rotor; 10 — bracket rotor head (D16T, the sheet s4, 2); 11 — mast (D16T, pipe 50x50x3); 12 — mounting bracket of the seat back (aluminium, sheet z, 2); 13 — seat; 14 — “airplane” version of the control knobs; 15 — seat frame; 16 — bracket “airplane” control knobs; 17 — bracket for seat mounting; 18,25 clips cable control wiring (4 PCs); 19 — brace (D16T, area 30×30, 2 PCs.); 20 — an arm of fastening of a mast (D16T, the sheet s4,2); 21 — upper brace (steel, area 30×30, 2 PCs.); 22 — horizontal tail; 23 — vertical tail; 24 — the tail wheel; 26 — the left branch of the control wiring (cable d2); 27 — axial beam (D16T, pipe 50x50x3); 28 — fixing unit axis side of the wheel; 29 — lower brace (steel, area 30×30, 2 PCs.); a 30 — seat prop (D16T, area 25×25, 2); 31 —brake device; a 32 — foot unit; 33 — keel beam (D16T, pipe 50x50x3)
There, on the front end of the keel beam, installed farm — riveted corners of duralumin and reinforced rectangular sheet pads triangular design. It is intended for fastening of the towing hook which is designed so that the pilot, pulling the cord may at any time be disengaged from the towline. The farm also augmented navigation devices — simple homemade indicators air speed and side drift, and under the farm — pedal Assembly with cable runs to the wheel direction. On the opposite end of this beam is installed empennage: horizontal (stabilizer) and vertical (keel and rudder), as well as safety tail wheel.
In the middle of the keel beam located mast and workplace pilot — seat with the car pristinely straps. The mast is attached to beam two duralumin plate brackets at a slight angle to the vertical back and serves as a basis for rotor two-blade rotor propeller. The mechanism of the rotor mast is also connected by a similar plate brackets. The screw rotates freely and spins up due to the incoming airflow. The rotor axis may be tilted in any direction using the handle, conventionally called “deltalina”, which the pilot adjusts the position of the gyro in space. This control system is the most simple, but differs from the standard used on the vast majority of aircraft that when moving the handle from the autogyro itself is not reduced, but rather gaining height. If desired, you can install and “airplane” control knobs (in the picture it shows the bar-point-shooting). Design naturally becomes more complicated. However, to choose the type of management is necessary even before the construction of the gyroplane. The alteration is inadmissible, as the skills acquired with “deltalina” handle, when switching to “airplane” can give an unwanted result.
In addition, when driving on eamle pilot foot controls nose wheel, and after takeoff, when the growth rate becomes effective tail — also feet and rudder. In the first case, he steers, alternately pressing the right or left foot on the corresponding shoulder of the cross member of the brake device on the wheel; the second on a particular pedal connected cable runs with driving directions.
The braking device is applied during the landing on runway. It is also not very complex. Pilot heels presses the clutch (or, simply a wooden Board) to the bus wheels, causing them to RUB against each other and thereby dampens the speed of the aircraft. The most simple and cheap!
Small weight and dimensions allow gyroplane to carry it even on the roof of the car. The blades are thus disconnected. They are installed on their workplace just before the flight.
THE MANUFACTURE OF THE FRAME
As already mentioned, the base of the frame of the autogyro are keel and axial beams, mast. They are made of duralumin tubes of square section 50×50 mm with a wall thickness of 3 mm. these profiles are used in the construction of Windows, doors, shop fronts and other elements of buildings. The variant of using box girders of duralumin angles connected by argon-arc welding. The best option material — D16T.
All the holes in the joists, mark so that the drill just touched the inner walls without damaging them. The drill diameter was chosen so that the bolts MB was a hole as close as possible. The work was carried out solely by the electric drill — use manual for these purposes is undesirable.
In the drawings coordinated most of the holes in the parts of the frame. However, many of them swirlies in place, such as plate brackets, I-beam connecting the keel with the mast. First, right bracket, bolted to the keel beam was drilled through holes in the base pressed to his mast, then screwed the left bracket and also drilled, but after a prepared hole of the right bracket and the mast. 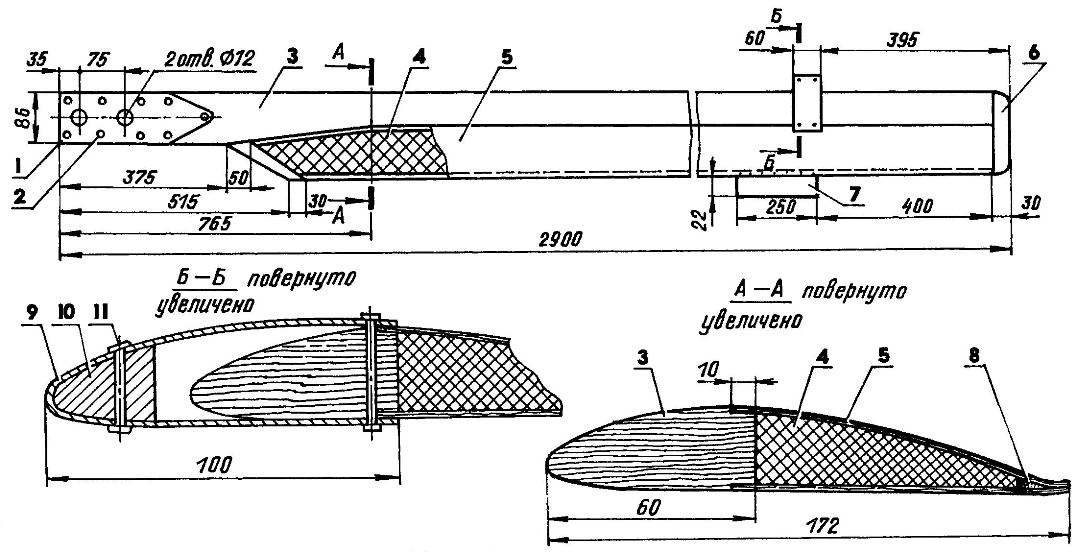 Pattern the toe of the blade profile

Template the top of the blade profile

Gluing sheets of plywood on a mustache 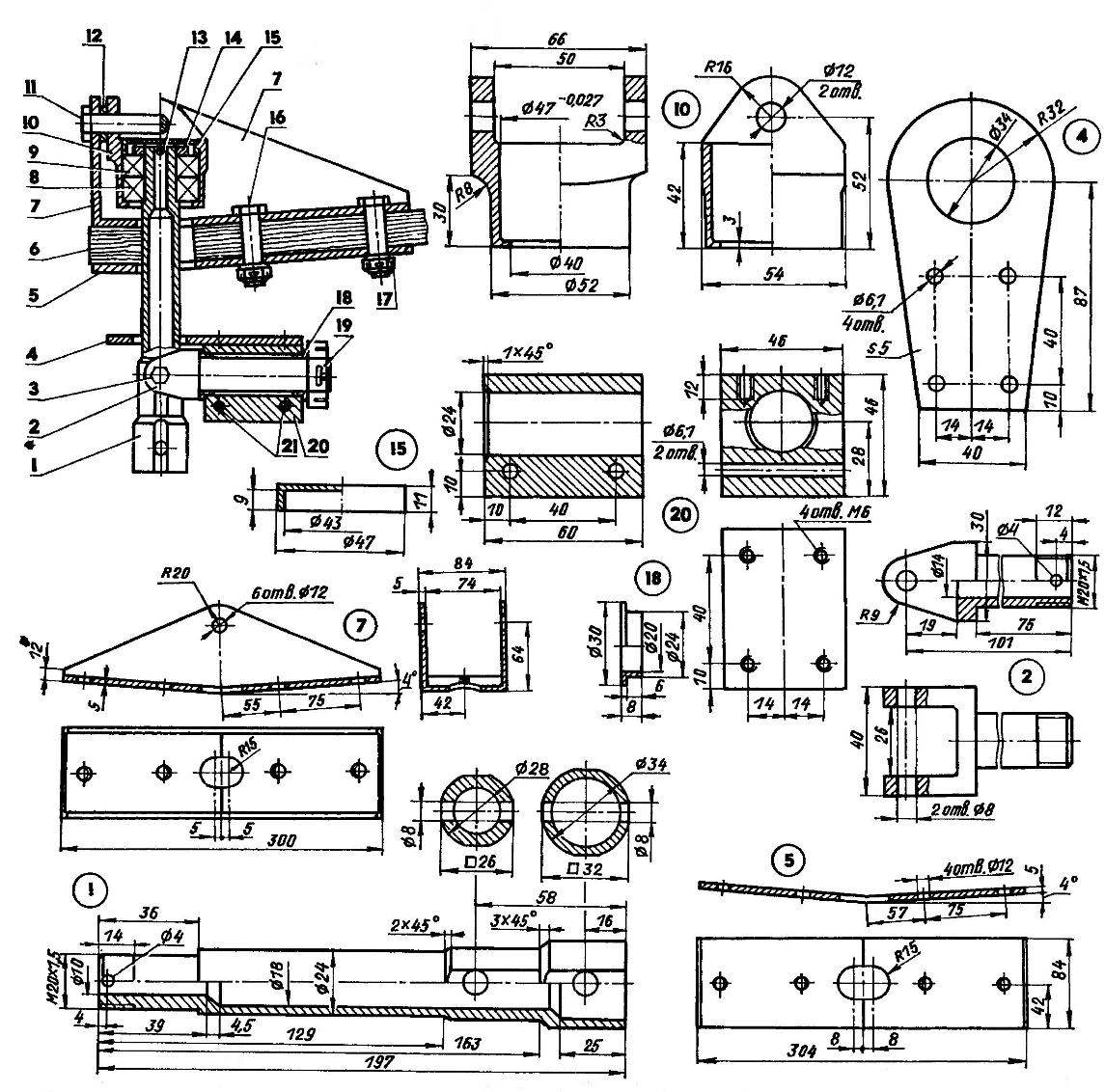 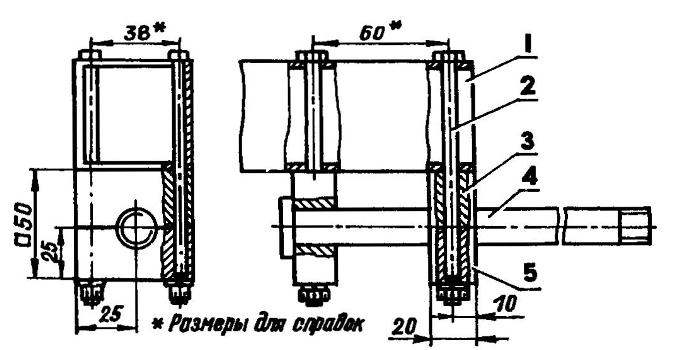 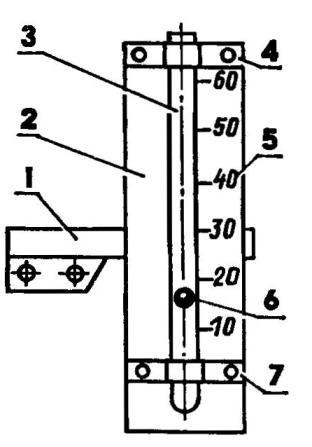 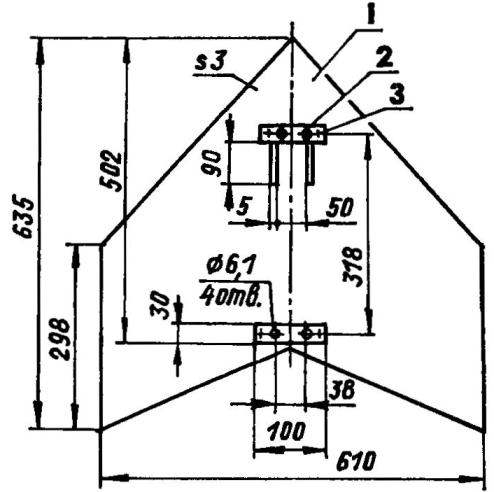 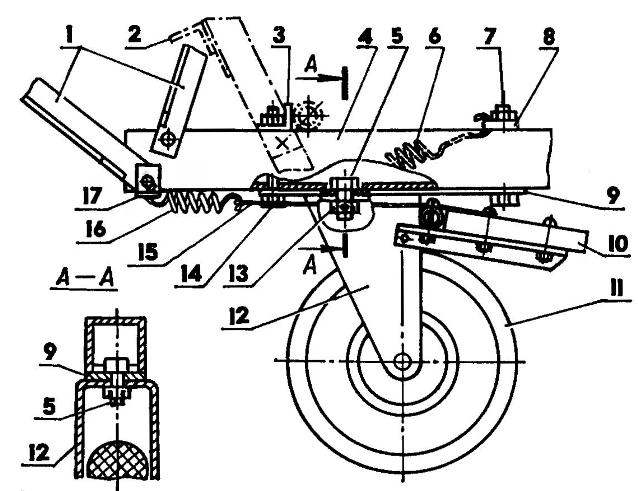 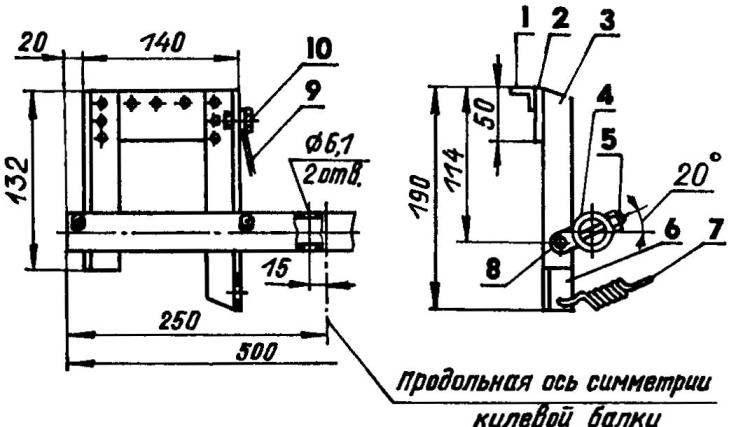 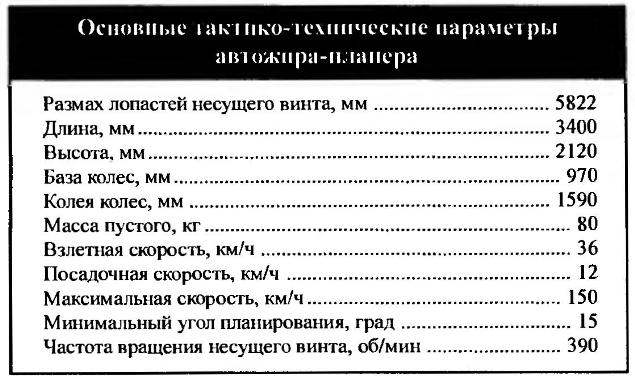 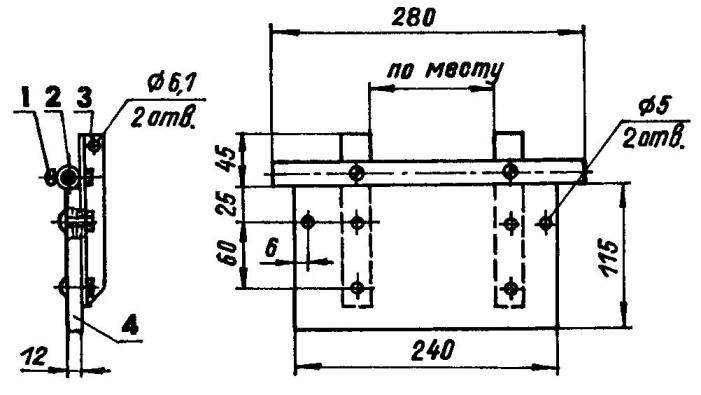 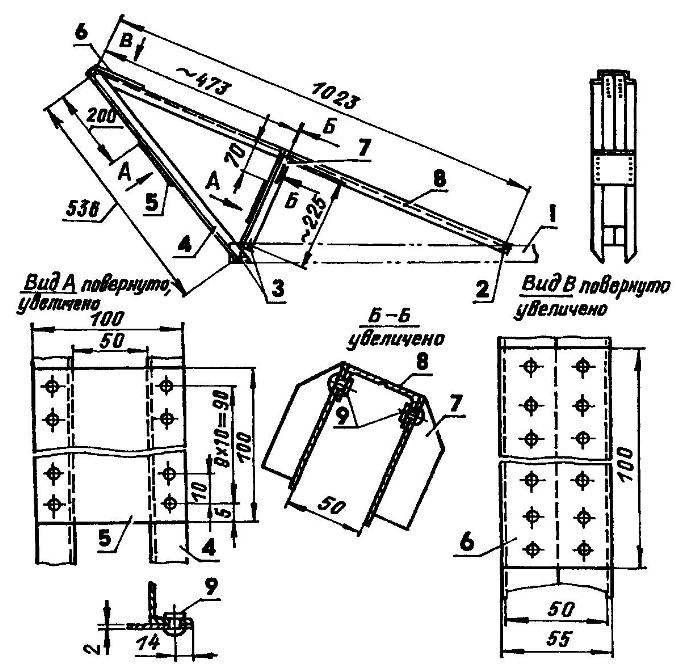 Braking device:
1 — bolt M5 (6 pieces); 2 — cross (D16T, pipe 12×2); 3 stringer (D16T, area, 15×15, 2); 4 — clutch
THE PRACTICE OF PILOTING
As in flight involves not only a pilot, but the driver of the car, then they must be full interoperability. Best of all, if the car, except the driver, will be another person who will be able to follow the flight and take all the signals of the pilot (reducing or increasing speed, etc.).
Before the flight, once again check the technical condition of the gyro-glider. At first use a relatively short towline length not exceeding 20 m. be Sure to warn the driver that should accelerate smoothly and in any case not to brake sharply.
Check the gyro against the wind. Spin the rotor with your right hand and wait until he starts to gain momentum at the expense of the air pressure. If the wind is weak, give the driver the command to move at a speed of 10-15 km/h on the airspeed indicator. Continue to help the rotor by hand until unable to do so.
As acceleration is acceptable with the rotor all the way back and give the driver the signal to increase the speed to 20-30 km/h. Controlling the nose wheel, move the car in a straight line. When the wheel comes off the ground, move your feet on the pedals. By manipulating the control stick, hold this position of a gyroplane, so he moved only on the side wheels not touching the ground nor the nose nor the tail. Wait until the increased air speed will not lift the gyro into the air in this position. Adjust the height of the longitudinal movements of the control stick (the rudder is not effective because the glider is towed on a rope). In flight, do not allow slack in the tow rope. Do not put the bends at high speed.
Before planting, line your position behind the car, until he reached the end of the runway. Gently tilt the rotor forward and fly at a height of about one meter. Maintain this position small “twitching” of the control knob. (In General, unlike the control plane, the gyro motion of the handle should be smooth and sharp, it literally jerks.)
Signal the driver to reduce speed. When he does, push the rotor fully back. Rear wheel gyroplane must first touch the ground. Keep the rotor is deflected back to prevent slack towline. General description, allow the vehicle to turn and move with him to the start. Keep the position of the rotor such that it continued to rotate. If flights will be no more, put the rotor in a horizontal position and when the rotational speed will decrease, stop by his hand. Never leave seat until the rotor turns, otherwise the gyro can fly without you.
Gradually, with the development of piloting technique, increase the length of the towline up to a hundred meters and climb to a higher altitude. The last stage of development of the autogyro flight will be a free flight after-Ceplene from the towline. In no case do not reduce in this mode, the air speed is below 30 km/h!
With a height of 60 m distance free flight can reach 300 m. Learn to make turns, to climb to a higher altitude. If you start with hills, then the range can be kilometers.
R. MERKULOV, air force Colonel, retired, Professor