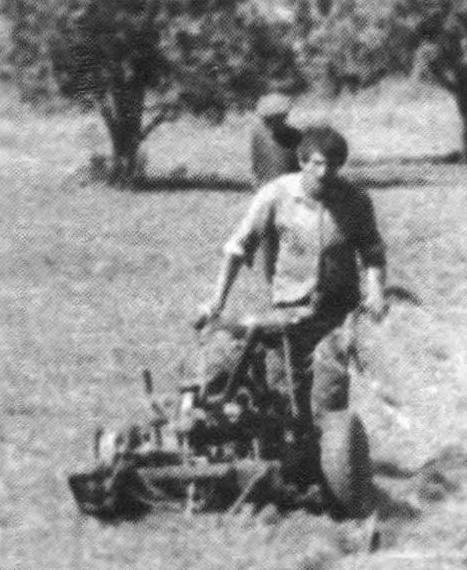 I’m a physics teacher and a faithful subscriber of the journal “modelist-Konstruktor”. Write and assemble a binder began while still a student in 1980. Thanks to him I became one of those whom the people called “avid homebrew”. One of my first designs was a mini-tractor “Gerez”, built together with the guys from the circle of technical creativity, which was led by part-time. Mini tractor took first place in the Republican review of technical creativity of pupils. Engine — motorized С3Д installed across; the gearbox from the car GAZ — 51, rear axle — from “UAZ”, shortened. At the mini-tractor 20 gears: 16 forward and 4 backward speed from 1 to 52 km/h. Its own mass of 500 kg can pull the truck with load up to 1200 kg.
Live in the village, know the burden of farm labor and therefore have set ourselves the task to mechanize it as possible. In some measure I succeeded: on his farm have a mower with an engine from a motorcycle “Voskhod” and the tractor with the engine from the T-25, another homemade technique.
The two-wheeled mower. The bridge from the cargo scooter Muravey engine from a motorcycle “Rising”. The design is a little complicated but the performance is high and mows good.
Tractor — the most significant of my homemade. It was built about 10 years ago and still serves me faithfully. The tractor is assembled on the basis of units of obsolete equipment: transfer box from his GAZ-66, gearbox and rear axle (it is shortened) is from the GAZ-51, front (also leader) — hybrid bridge “Volga” and “UAZ”. Has hydraulics for the operation of the suspended system with a homemade double-hulled plow.
My wheel tractor is a powerful and almost not inferior to the patency of the crawler. Especially valuable is its ride quality in a mountainous area on the slopes. Its own mass about one and a half tons it can be towed by a homemade single-axle truck with a lifting capacity of two tons.
A. GADZHIEV, S. Kurakh, Dagestan