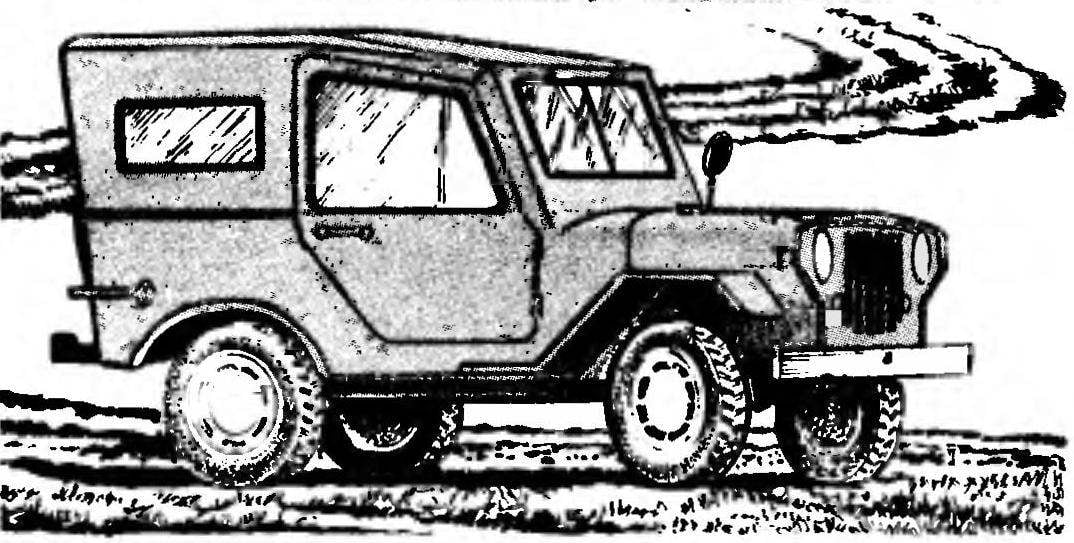 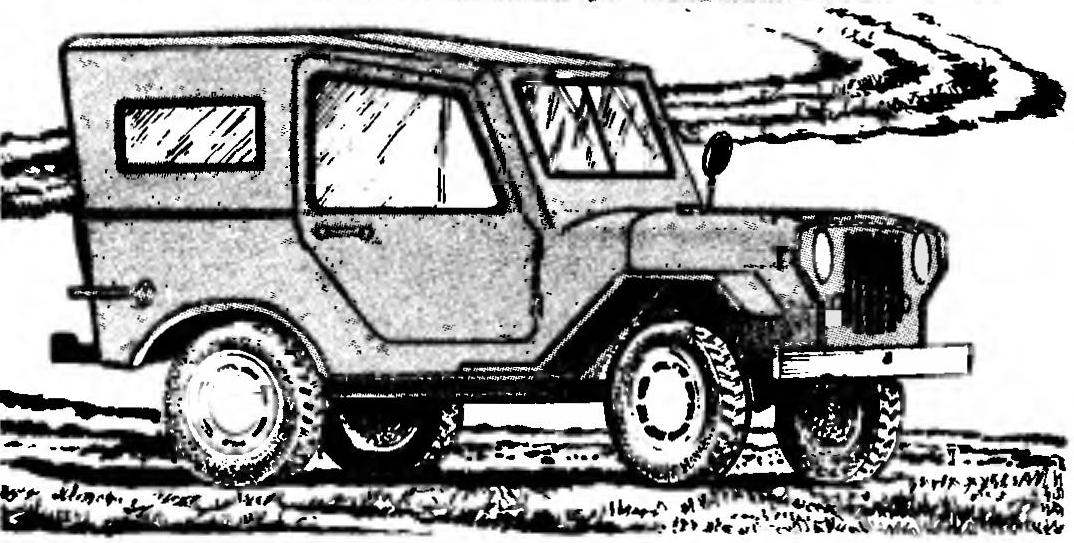 The vehicles of the “jeep” has always attracted Amateur by automakers its pronounced functionality: as they say, a jeep is a machine “advantage.” And, of course, the plainness of the external forms and the complete absence of surfaces with double curvature — and therefore, easy manufacturing of the body from any sheet material, ample inner space. In short, the machine with the appearance of the jeep will always be preferable for those who starts creating his very first vehicle. It was decided to develop a car like the jeep. However, the portrayal of the machine was that the plainness of its external forms is only apparent, and create a truly original body is very, very difficult. All of my “designer” refinements led eventually to the appearance of the paper machine is clearly artisanal. In the end had to turn to classical models by taking as a basis the famous “jeep” of the forties. In fact, I do, in General, a layman in design, to compete with the professionals who created a kind of reference appearance of this vehicle.
Your car I intended to design with the extensive use of components and assemblies motorized FDD. Mapping its track and the track of the station wagon revealed a conversion factor of size, then on the drawing Board appeared the outline of my car, almost repeating an appropriate scale and contours of the prototype. However, to my great regret, to make a mini-jeep scale copy of the “jeep” failed: size of wheels, anthropometric parameters of the driver and passengers, the location on the car engine and other units — all forced to make new adjustments to the design. The result was a car made, in essence, “based on” the legendary jeep, which got (maybe somewhat strange for such a machine) the name “Elf-TX”. It’s something I want to present to the readers of the journal “modelist-Konstruktor”.
A few words about the technical data of my replicar (the so-called machine, copying the outward signs of vintage cars). “Elf-kind” is a four seater two-door car. Structural diagram — front-wheel drive car frame design with a rear engine forced air cooling working volume of 350 CC. the car Body is a combined wood-metal. The front and rear axles of the mini-jeep is almost the same — both made with the front axle of the sidecar FDD. The front axle of the jeep, however, has changed considerably in order to organize the front-wheel drive. How it happened is shown in the drawings of my car.
The frame of the machine consists of four major units: Central, front, rear and subframe for the engine mounts. Central and front nodes of the frame are made of welded steel tubes with a diameter of 45 mm, rear — out of pipes with a diameter of 25 mm, the subframe is made of steel channel bars 40×60 mm and steel strips with a thickness of 3 mm. of the Central, front and rear nodes of the frame are docking stations that allow using nuts and bolts to put them together with front and rear in a single unit, as shown in the drawing frame. Subframe, welded steel channels and parts, bent from sheet steel, is mounted in the front of the frame connecting on three sites — two of them are located on the front aspect of the frame, and one on Central. The installation subframe is carried out with the use of rubber gaskets, to some extent reduces the influence of engine vibrations to the frame of the machine.
Rear axle of the jeep is, as already mentioned, the redesigned front axle motorized FDD, which allowed to make a car with similar suspension front and rear wheels.
Front axle is a leading. In combination with the front engine, this arrangement has proved to be very successful. Here and more intensive cooling of the engine, and a more rational use of the volume of the car, and is much more reliable motor control with short and rigid rods instead of cables. And the maneuverability of the cars with front-wheel drive is slightly higher than that of the leading vehicles with the rear wheels.
The drive from the main transmission to the front wheels is via cardan shafts with hinges of equal angular speeds, which were designed using the universal joints from the steering shaft of the vehicle ZIL-130.
The wheel is also motorized from the FDD, and the only difference from regular — advanced 40 mm rim, which allowed to improve the patency of the machine. 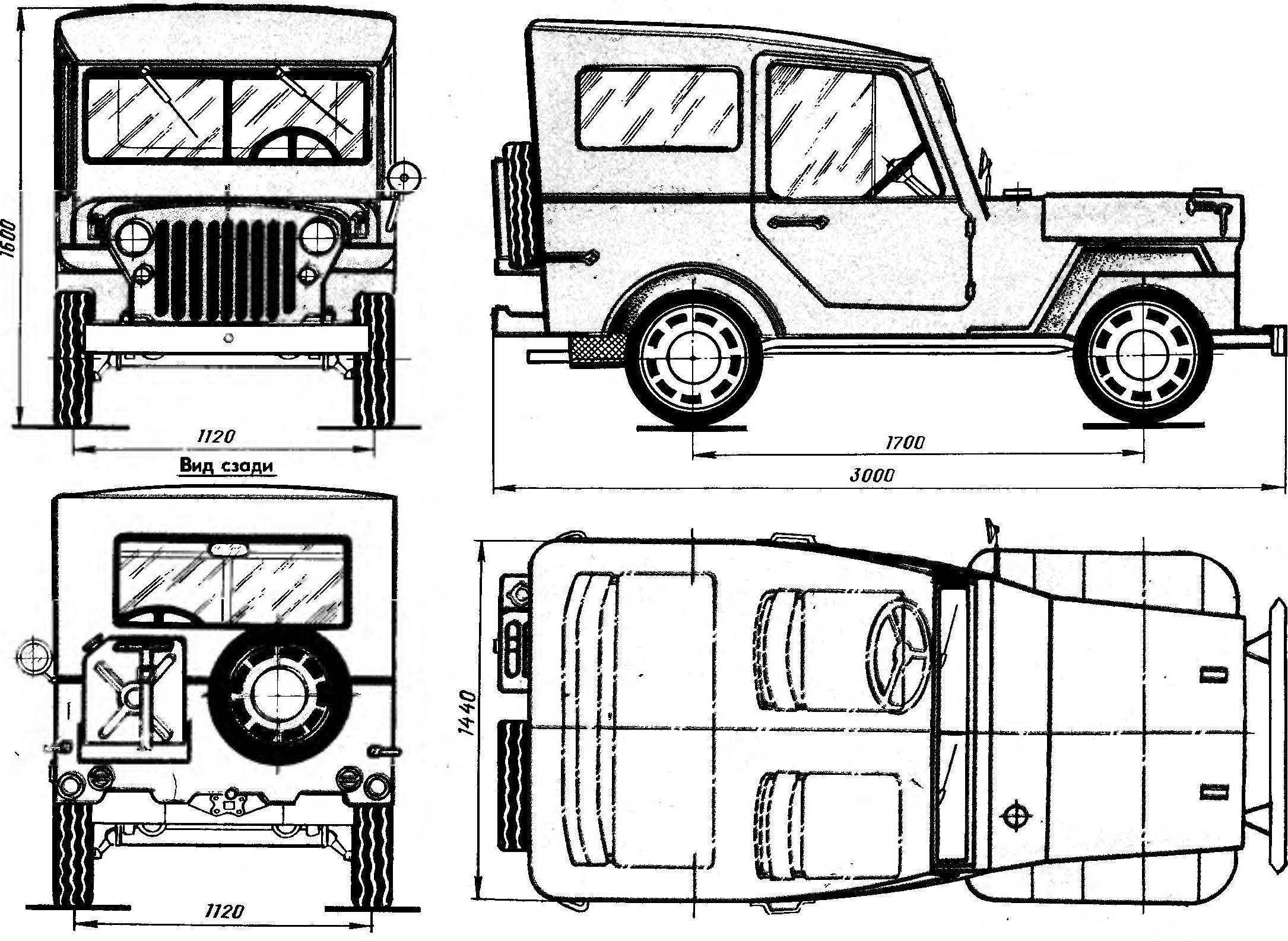 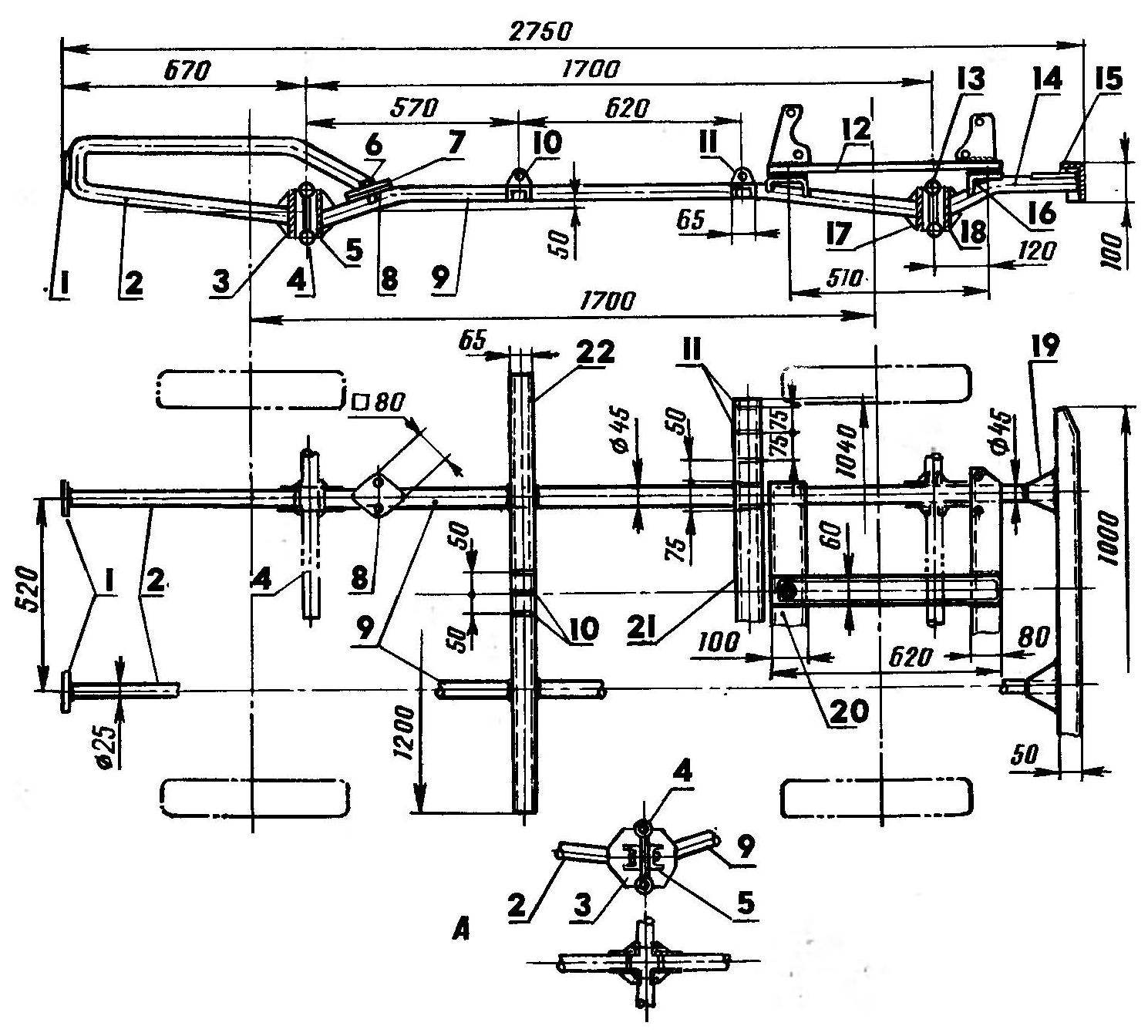 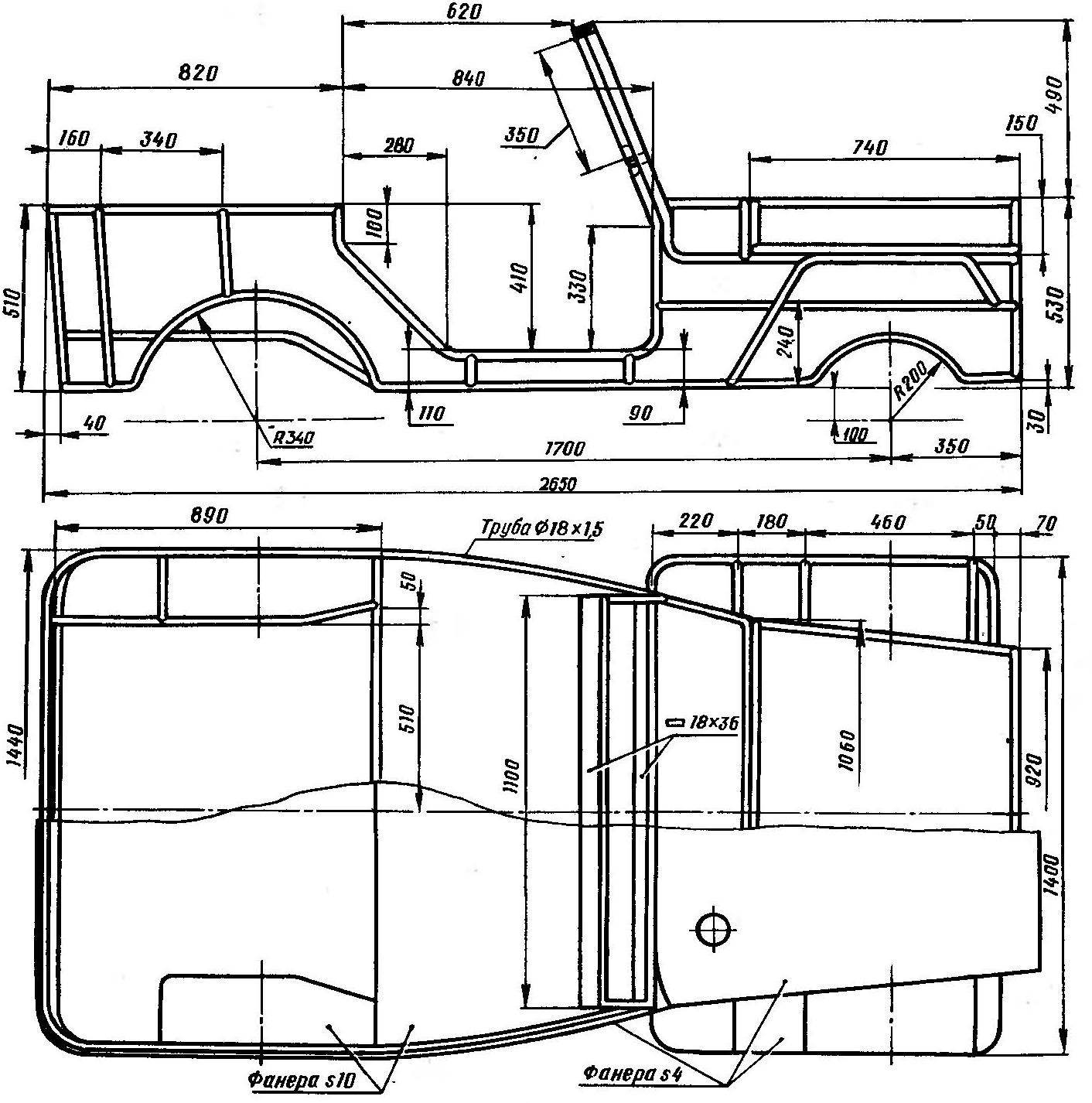 Fig.4. The body of the mini-jeep “Elf-TX”.
The frame is welded tubular steel, diameter 18 x 1.5 mm tube of rectangular cross section 18 x 36 mm (crossbar of the windshield frame). Sheathing — plywood, 4 mm thick, fixed to the frame by screws M5. Floor is made of plywood 10 mm thick.
Body “Elf” mixed construction with steel tubular frame and plywood sheathing. For the frame used tubular billet of diameter 16…20 mm with wall thickness 1,5…2 mm. welding — gas. For installation of the framework it is desirable to use the simplest slipway, which represents a portion of a smooth floor with a neatly drawn on it planned projection of the frame. As preparing the elements of the lower part of the frame they are fixed on the floor and slightly primatyvajutsja welded to each other. For fixing elements of the upper part of the frame used wooden trestles, nails and a soft binding wire. In the Assembly process was carried out constant control of the geometry and if necessary the alignment of the frame. The final fusion joints was carried out a short symmetrical “steps”: the seam on the right side — symmetrical seam on the left side, and so on until the complete frame.
Turnkey frame sheathed with plywood with a thickness of 4 to 6 mm. Fastening it to the frame screws with thread M5 (head—, “secret”). For cladding surfaces with a large curvature of the veneer workpiece is preferably pre-soak in water.
Ready body shpakljuetsja and is covered with a layer of fiberglass in epoxy, then re-puttied with epoxy putty, vyshkurivaetsya, primed and painted. Experience has shown that while it is best to use alkyd enamels that do not require drying, special thermo cameras.
The removable part of the body also has a tubular frame with plywood lining of the sidewalls. However, this technology cannot be utformat the lining of the roof which is a surface of double curvature. To create the shell of this form, Amateur automakers usually use Boobs or matrices, which is a task very time consuming (this technology is often used in the manufacture of small series of a few cars). For vyklevyvanija just one roof makes sense to use a simplified technology of manufacture of convex surfaces, which at the time was mentioned in the journal “modelist-Konstruktor”. I will repeat briefly some of the stages of this curious technology.
After welding the frame of a movable part of the body top frame — the one that is the perimeter of the roof, is plastic wrap is tightened and secured on the frame of adhesive tape-adhesive tape. Further, the frame flipped, and the film laid out a small piece of fiberglass impregnated with epoxy binder. The computation should start from the conditional center of crisenoy panel and lead to the periphery, pressing a shaped area flap of polyethylene film and on top of it — slide, dry river sand In this case it is necessary to control the curvature of the roof surface, defined by gravity and elasticity of the plastic film, achieving a redistribution of sand across the surface of veclachi receiving shell to the desired shape. After curing, epoxy adhesive film is removed and the roof prepared. It remains only to paint. If necessary (if the roof turned out to be not rigid) shell enhanced pasted on the inside of exterior stringer of wooden slats with cross-section 20×20 mm.
Side removable parts of the body are covered with plywood just as it was done on the main part using screws “countersunk” head. The doors also have a tubular frame and plywood sheathing.
The body is glued from the inside with packing or construction foam, and then upholstered with artificial leather. The door from the inside also filled with foam, and then sew up the 3-mm plywood and faux leather.
All three car seats home-made, welded steel pipes with a diameter of 20 mm. frame covered with a rubber strip, cut from an old camera truck, on top of the tape is glued to the foam and then cushions upholstered in artificial leather. Right front (passenger) seat is secured so that it could swing forward for landing passengers on the rear seat.
Control system — automotive type. Steering type FDD, the brakes also motokrosove, hydraulic, with drive to all four wheels. The right of the driver are mounted two handle — switch gear box and reverse gear. Drive them to the appropriate units using push-pull rods. Rigid rod connects the pedal also clutch with the appropriate mechanism. The throttle of the carburetor — combo: hard pull and the rope in budenovskoy shell.
Electric “Elf” made the type of motorized FDD. Lights — scooter Tulitsa, front position (“turn signals”) — a motorcycle IZH, rear “dimensions” in conjunction with “turn signals” and stop the lights from an old truck. As it turned out, this set of lights corresponds to the appearance of the prototype of my mini-jeep “jeep”.
Igor KARAMYSHEV, engineer