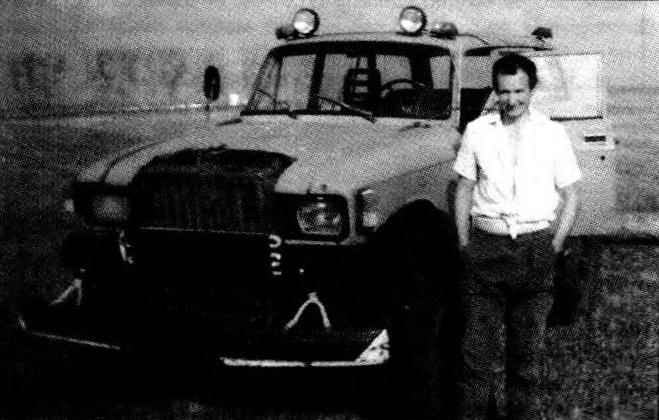 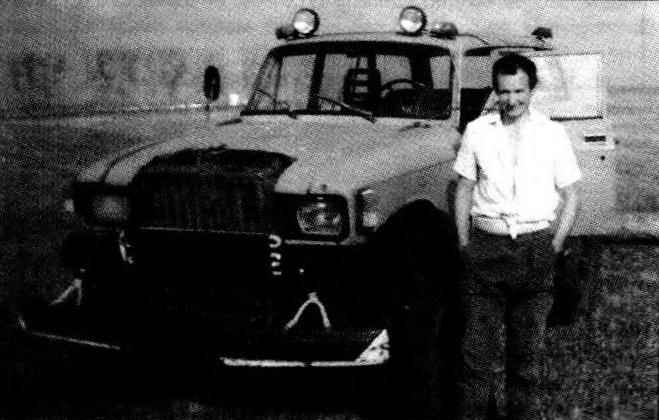 Dear editors of the journal “modelist-Konstruktor”. Your journal I read from 1988 (I’m now 33). By profession I am a mechanic, own a welding business, and to all, a big fan of technology. Using published in the journal of the technical development of Amateur designers, he built three mini-tractors. It was found and used some of their technical solutions, for example, a tractor equipped with gidroksila.

The magazine also inspired the construction of the car high (maybe even higher) permeability.

“Jeep” (now call my car in the village) to do that I started a few years ago, not so long ago tried it on the go. Maybe “to do” — too loudly, because I was mostly collected as the vehicle is assembled from ready-made components and assemblies (reviewed or repaired) from the old production cars. My task was to pick up these ready-made mechanisms that could trouble-free to operate, without harming each other, and connect them together.

With the problem I seem to have managed, as by subjecting the machine to a severe test, walking on it “in the valleys and on the hills”, was pleased with her.

The body was taken moskovichevskoe from 21403 (type universal). Think he is better suited to the appearance of cars of class “jeep” than body type sedan or hatchback, and the boot volume of the wagon is such that allows it to fit in the large spare tire, but other driving tools: the Jack, the cable, the tool, and just some baggage.

The chassis of the machine is almost complete (frame, wheels, suspension) — truck terrain GAZ-6З. About this Rover — the conqueror of off-road of yesteryear remember is that the elderly and young — perhaps only experts in the history of technology. It was established on the basis of the legendary post — war home country roads- truck GAS-51, so in many ways was similar to him. The GAZ-6З, unlike the prototype, both bridges were leading, but the rear axle was only one wheel on each side.

Tire wheel with cameras had to be replaced — regular rubber though survived, but time has lost its elasticity and is chipping in places. Instead, a good fit tires from GAS-66.

To fit the base of the wheels under moskovichevskoe body mounting brackets rear springs, and with them the leaf springs moved forward.

Frame GAS-6З had to be reduced to 710 mm, so it is not too were behind from the body. The same shortened rear driveshaft. Then cut the subframe along with parcopa and crosshead reset at the end of the cut frame. The rear suspension removed podreczniki and springs left eight sheets, and in front — only seven. That is enough even with a full complement of passengers and loaded “under an outset” is the trunk. In addition, the front shocks now brought under I-beam front axle and fixed it there inverted ladders. This has allowed some to reduce unwanted height in salon “jeep” of the driver and passengers. The truth is, exactly the same it was necessary to consolidate and rear springs. But this would require significant modifications to the underbody, as under it I installed the gas tank.

Engine. His selection was the problem. A regular motor is not preserved, and if you put a modern high-speed, the speed of larger wheel will be too high. Riding on low gears heralded high fuel consumption. To address these shortcomings was only possible complication of the transmission — it was necessary to install and dual. 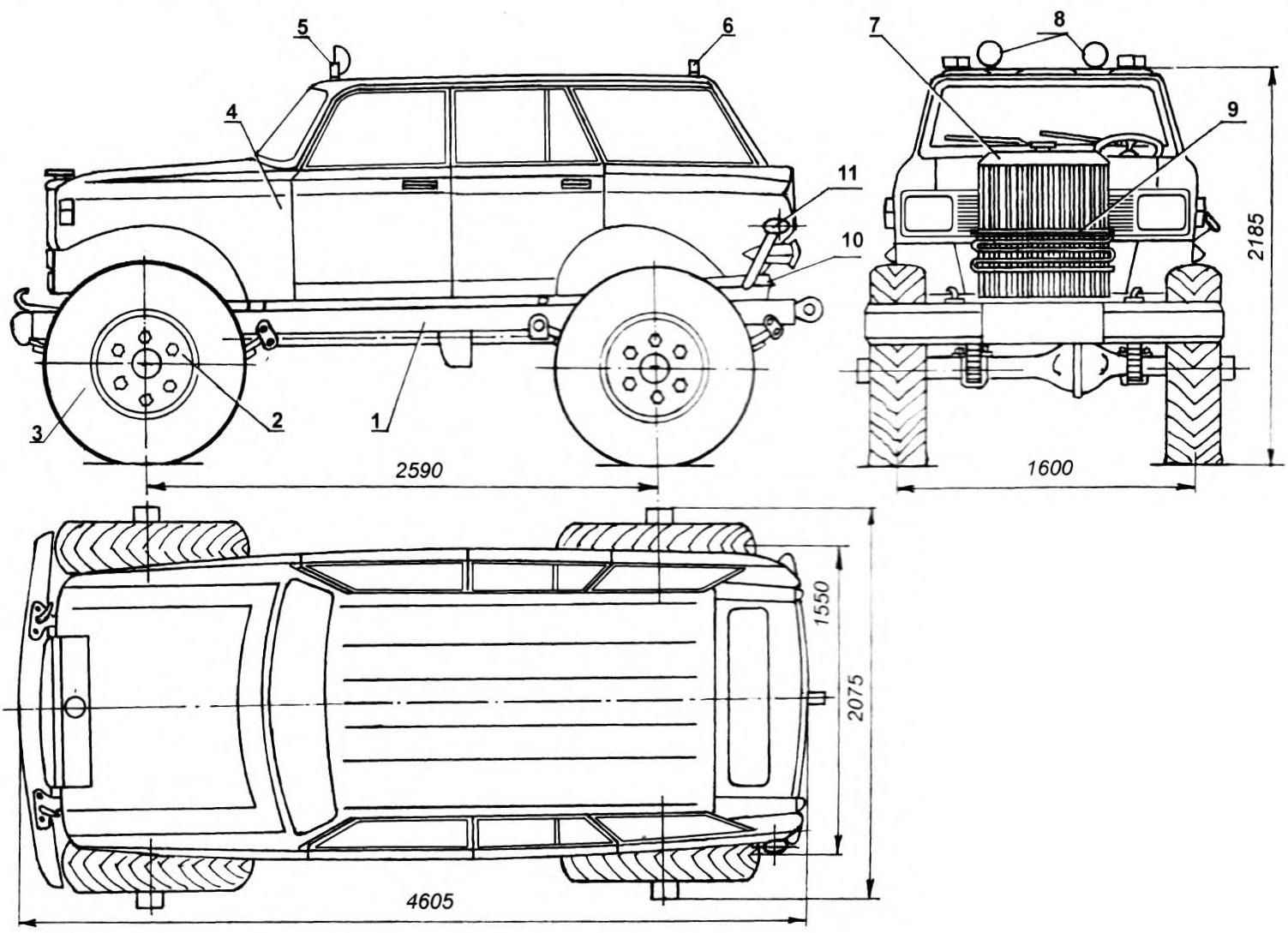 “Jeep” with a body of a passenger car “Moskvich-21403”, like station wagons and chassis of the truck, all-terrain vehicle GAZ-63:

Transmission “jeep” (all unspecified positions are from the GAZ — 6З): 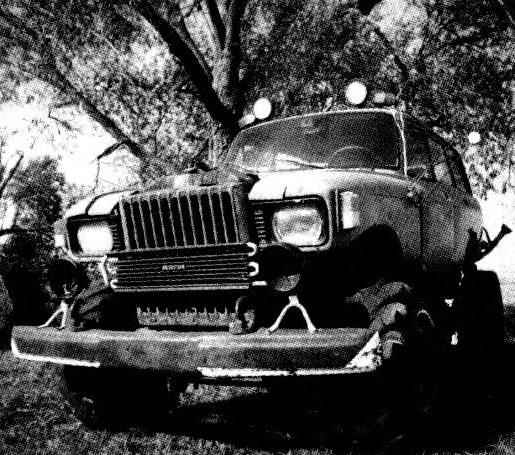 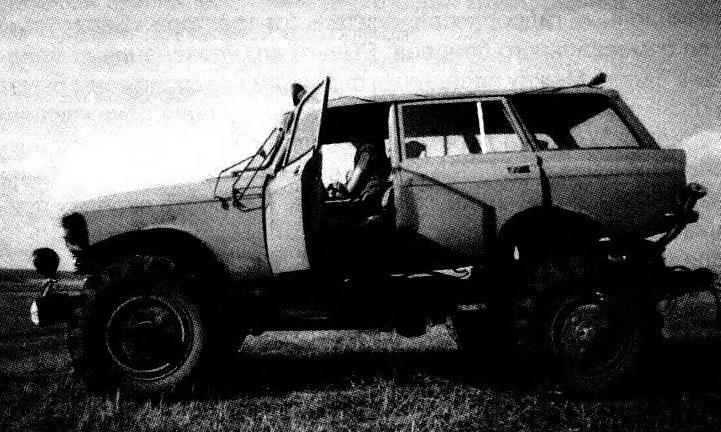 In the end still managed to find a slow speed motor from a car the same era — army GAZ-69. He was a good fit for the powertrain GAZ-63 was in fact put. say, on this machine the engine from “Victory”. However, the engine GAZ-69 is smaller (with only four cylinders, not six) and weaker, but of power (52 HP) for my car is enough — she can pull a still and trailer with a payload up to 3 t But the size of motor required the alteration of the legs of its fastening to the frame. Still had to make additional holes with a diameter of 10.5 mm in the flange of the clutch housing and the corresponding threaded holes M10 in the rear wall of the cylinder for a more reliable joining of the engine and transmission.

All components and assemblies of the drivetrain: clutch, transmission, transfer case, driveshafts, axles to the main gear — native, from truck-terrain vehicle GAZ-6З. Apparently, the machine was made once the conscience — in addition to the sealing rubber cuffs to change anything and was not necessary. Brake system with all mechanisms is also established. Staff and steering. Only the steering column is moved further from the front wheels, and steering shaft lengthened and made with a u-joint.

Even heat sinks — liquid cooling of engine and oil all from the same GAS-6З. Install them in the engine compartment moskovichevskoe body was impossible, so I had to sacrifice appearance and cut the front part of the body and the hood, and redo the last opening on the back. Now the hood “alligator” type, that is, the front rises and leans to the windshield.

The body of the “Moskvich” to the frame GAS-6З attached at four points, two behind and two in front. Back to each longitudinal frame fastened with bolts M16 for the cradle, and the cradles welded to the cross member inch pipe up the entire width of the frame. Through the appropriate hole in the crossmember and the longitudinal members the body is joined to the frame with four bolts M14 — two on each side.

In front of the body laid on another cross made from sections of channels 8 and welded in a rectangular pipe. And moskovichevskoe body, and gazovskih frame cross member attaches too M14 bolts (two each side).

On the frame under the body fixed three-section four-position directional control valve (tractor “Belarus”) for tipper trailer. The levers of his administration displayed in the salon. Between the front seats is located the gear shift lever front axle and the lever downshifts. Gear shift along with handle their shift is just in the place where they were supposed to be moskvichova box. The transmission is attached to the crankcase PTO with oil pump NSH-10 for the hydraulic system.

That this, in General, a simple design of my SUV.