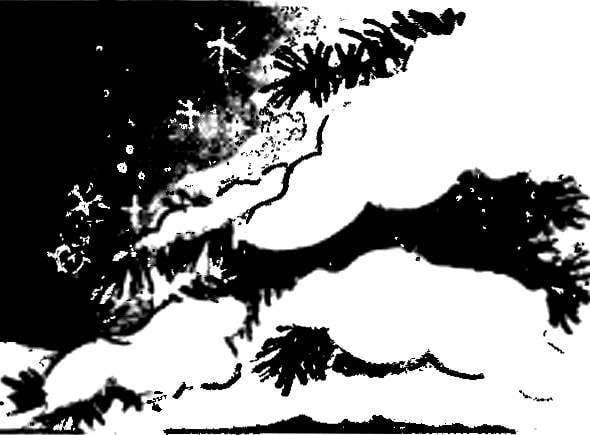 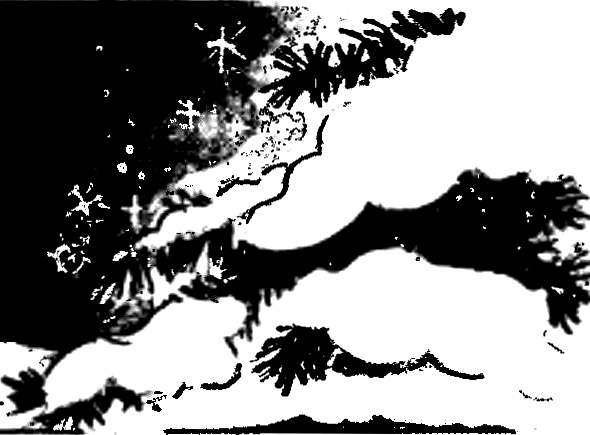 Every year with the arrival of winter in edition beginning to receive letters in which readers expressed legitimate confusion about unreasonable, in their view, the energy consumption of household refrigerators. Indeed, at a time when the window — bitter frost home refrigerator with a rumbling absorb all the new kilowatt hours of electricity to lower the temperature inside the refrigeration Cabinet two to five degrees Celsius and inside the “freezer” — to minus ten or fifteen. However, today few people remember that in the houses built before the war in the kitchens was located built-in wardrobe-fridge, which is a niche in the outer wall, which with a few holes communicating with the outside air and had a thick door with insulation. Of course, this refrigerator was not very reliable: when you thaw frozen foods melted, and in extreme cold turned into ice blocks that freeze should not.

Of course, you can equip this chill Cabinet is quite simple temperature controllers developed by our reader Yu Riabokon, which uses the effect of water expanding when it freezes (see “M-K” №8, 1991). However, such a controller will not save the products upon the occurrence of a thaw. That is why many authors propose variants of combined devices that combine the advantages of electric refrigerators and cabinets that use outdoor cold.

For example, one such proposal. Our reader N. Soprunov, resident of the settlement Coastal the Samara region, informs that with the purpose of increasing resource and energy savings, he combined the cavity of the refrigerator “Saratov” with a street atmosphere. For this purpose, the side wall of the housing to cut a hole for the pipe with a diameter of about 20 mm, and the cut off corners of Windows, as shown in the figure. Rubber tube to reduce heat loss he wrapped cloth and on top — polyethylene film; one end of the tube inserted into the hole in the side wall of the refrigerator, and the second brought out the window. The cracks around the tube sealed. According to the observations of N. Soprunova, this modified refrigerator was much less activated when the same position of the thermostat controller. When the temperature of the air outside becomes positive, the tube is sealed with a cork.
We believe that the effectiveness of the use of “gratis” cold could be even higher if it ensured at least a minimal convection of the incoming cold air. For this we need to cut at least two holes in the fridge, output two tubes, providing one of them a simple baffle, allowing for any wind to provide sucking action of the air through the cavity of the refrigerator. And the tube for air supply could be more. 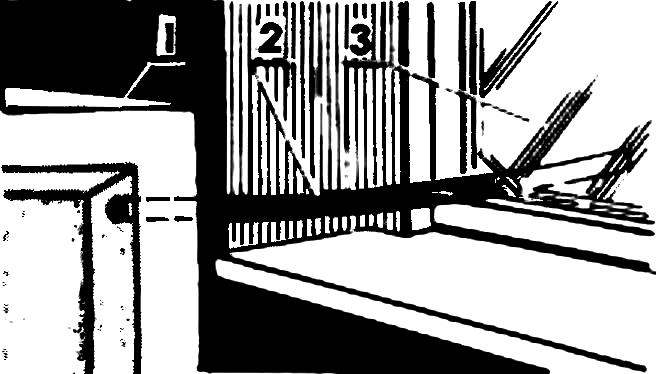 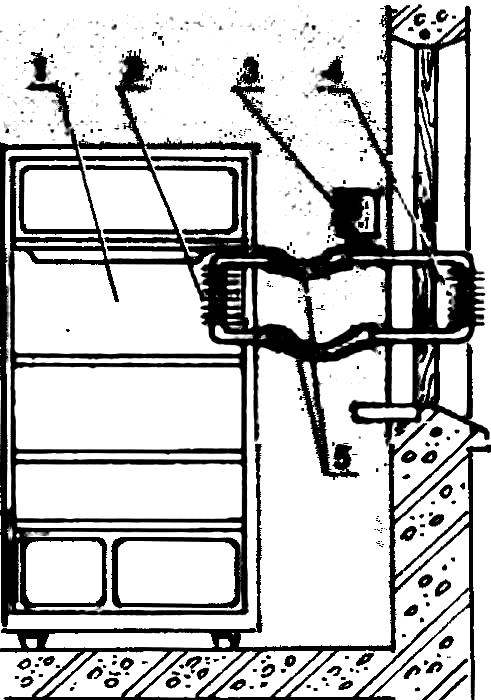 Modernization of domestic refrigerator by using liquid cooling of the refrigerating chamber:
1 — freezer, 2 — additional cooler, 3 — expansion tank 4 — street radiator, 5 — connecting the hoses.
In a different approach to this issue Leningrad A. Chizhevsky. In the cold season it translates your fridge for winter operation; however, external cold air is used to cool the condenser and compressor.
To arrange such a cooling, A. Chizhevsky mounted on the rear wall of the refrigerator open top box-shaped casing. To the bottom of the casing summed up the duct — corrugated hose. Forced-feed into the casing cold air ventilator: intake its the hole using the same hose connects to atmospheric air, a delivery — tube reaching to the casing. As a fan node is used from miniature vacuum cleaner “Breeze”, consisting of the motor and the impeller. To reduce noise from the fan, it is closed insulating box. But in principle the same purpose the fan can be set and the window, protecting, of course, from rain. 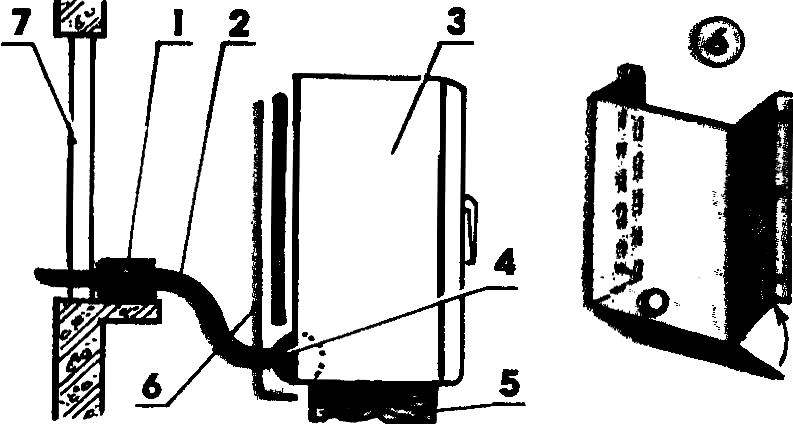 A method of increasing the efficiency of the refrigerator due to the cooling of the condenser, the compressor and outdoor air:
1 — fan, 2 — connecting hose, 3 — fridge, 4 — compressor, 5 — stand, 6 — housing, 7 — window.
The refrigerator is installed near a window, on a stand with a height of about 0.6 m that allows to reduce the length of the duct and reduce the loss of cold.
A fan motor connected parallel to the electric compressor of the refrigerator and is switched on only when the compressor. intensively cooling it, and the condenser cold outdoor air. According to A. Chizhevsky, the compressor was much less likely to be included, and the total power consumption (including the consumption of its electric fan) fell slightly. This should increase the resource of the refrigerator — because it is determined by the operating time of the compressor unit.
In the summer, when the outdoor temperature exceeds the temperature of the air in the room, the fan stops and the casing is removed, or it only folds the bottom.
According to A. Chizhevsky, the advantages of such an improved household refrigerator can be attributed to the fact that he became a permanent source of clean heated air, which is important in winter, especially in the kitchen.
Definitely option A. Chizhevsky preferable to one that offers N. Soprunov. The fact that the message of the cavity of the refrigeration Cabinet with the atmosphere will cause a change not only temperature but also humidity. In a domestic refrigerator, the air is usually dry (moisture like wimobaiausy and settles on the evaporator “the freezer”), while on the street, even in cold weather the air is quite humid. All this can cause excessive frosting “fur” to “the freezer”.
There are shortcomings in the design of A. Chizhevsky. First and foremost — the presence of the blower motor. Not too wise to take the savings of kilowatt-hours, spending for that same electricity. Even in the case when the balance is in our favor. The solution here is not too complicated. It is necessary to refuse from the blower motor. The condenser is heated to very high temperatures, and this will allow for convection cooling of this element of the refrigerator; it is only necessary several times to increase the cross section of the pipe, the inlet of the cold air, or, in the end, lay a few of these pipes.
It is possible to offer another option for increasing the efficiency of the refrigerator. The first two were based on such a heat carrier as air, however, it is possible to bet on non-freezing fluid such as antifreeze. In order to ensure the cooling cavity of the refrigerator, you will need two radiator: one must be placed in a refrigerator and the other on the outside, for example, on the frame of the window. The radiators are connected to rubber hoses and fill with antifreeze. When the temperature outside is lower than in the refrigerator, chilled antifreeze will sink, displacing less cold liquid in the street the radiator. The temperature inside the refrigerator will fall and this will greatly reduce the frequency of the thermostat and, accordingly, the total operation time of the compressor.
It seems that environmentally friendly ways to use the “gifts” of heat or cold may be asked a lot. We encourage our readers to share their developments: among the hundreds of thousands of our subscribers certainly there are those who have been already using more efficient methods of energy saving. We will be happy to provide them with our coffee strip.