Imagine: around the entrance waiting for us miniature car a nice modern shape. Let’s do a small trip. The door swings open, as usual, and gently rolled back, releasing a wide opening for planting. Installed on hinges of the seat POPs out, we get them directly from the pavement, and they can easily occupy the same position.
It is possible to go. But look: in the cockpit not usual for all controls and devices — they are replaced by a single lever and a few buttons. The driver slightly deflects the lever and the car smoothly and quietly moves off.
Bursting out into a broad Avenue, our crew is not inferior in speed to its neighbors — an ordinary car. Although we have not heard the usual rumble of the engine, not smell of gasoline and exhaust… You guessed it — a miniature electric vehicle that for many is still only a fantasy.
Interestingly, in fact, the electric car almost the same age as diesel. At birth, at the end of the last century, it developed even more rapidly than other types of vehicles. Suffice it to say that the electric vehicle in 1899 for the first time broke the 100-kilometer line speed, reaching unprecedented for those times the numbers: 106 km/h But too high were the main disadvantages of this machine: large mass, small power reserve even at a low average speed. There was another, serious and powerful rival a car with a gasoline engine. About the electric car long forgotten.
Remembered about it only in 60-ies, when there was, especially in the capitalist countries, the so-called “problem of transport in big cities”: poisoning the streets of the poisonous exhaust gases of automobiles, is not illegal dump on the road — so many of them.
Needed a new, silent and compact vehicle specifically for cities that were not allocated in the atmosphere of settlements harmful gases. This tool aims to become electric car.
In our country, many designers in recent years are working to create various kinds of electric vehicles for the city. Amateur automakers are able to provide in this important work is invaluable in the power that their electric cars can embody the original decision, to become a testing laboratory for scientists.

Fig. 1. Diagram of urban electric vehicle (side view front).
The electric car provides great opportunities for technical creativity, and its development and construction are not associated with great difficulties and costs. The machine can be made on the basis of standard electrical equipment and components from conventional cars. It is distinguished by extreme simplicity in manufacture and in operation. The size of the electric car may be small: in fact the battery is easily placed under the seats, and a smaller gasoline motor.
Here is one of possible options is quite simple and miniature electric vehicles. It is suitable for trips around the city for hours without intermediate recharging of the batteries and is designed for the average family consisting of two adults and one or two children, that is, the number of seats corresponds to the formula “2 + 2”.
In the electric vehicle, no complex units, even the drive from the motor to the drive wheels can be simplified. Front and rear axle, suspension, brakes, wheels, steering column from a regular used car or microcar. To control used two pedals; one connected with the rheostat and changes the movement speed, the second brake pedal.
Batteries you can use standard lead acid, voltage 6 or 12 V. These batteries are inexpensive, reliable and simple to use, but have two very significant drawback — a large mass and low energy intensity (i.e. the energy produced per unit weight, the average 18-25 W•h/kg). A very promising Nickel-iron batteries, which are compared to the lead much longer service life and less weight, their energy intensity is 23 to 30 W•h/kg. Other types of special batteries with high energy capacity at low weight, has not yet emerged From the experimental stage. Almost all the electric vehicles manufactured even at the factory, now supplied with lead batteries.
Batteries — the heart of the electric vehicle and at the same time the weakest of his place. After all, the characteristics of the electric — power reserve, dynamics, speed, weight — depend primarily on them. Due to the low intensity of each battery is necessary to increase their number, which in turn leads to an increase in machine weight and reduce the reserve of speed and dynamics.
It is therefore necessary to reach the minimum weight of all components and the body of the electric vehicle. Existing models the total mass of the battery is 50-70% of the total mass of the electric vehicle. 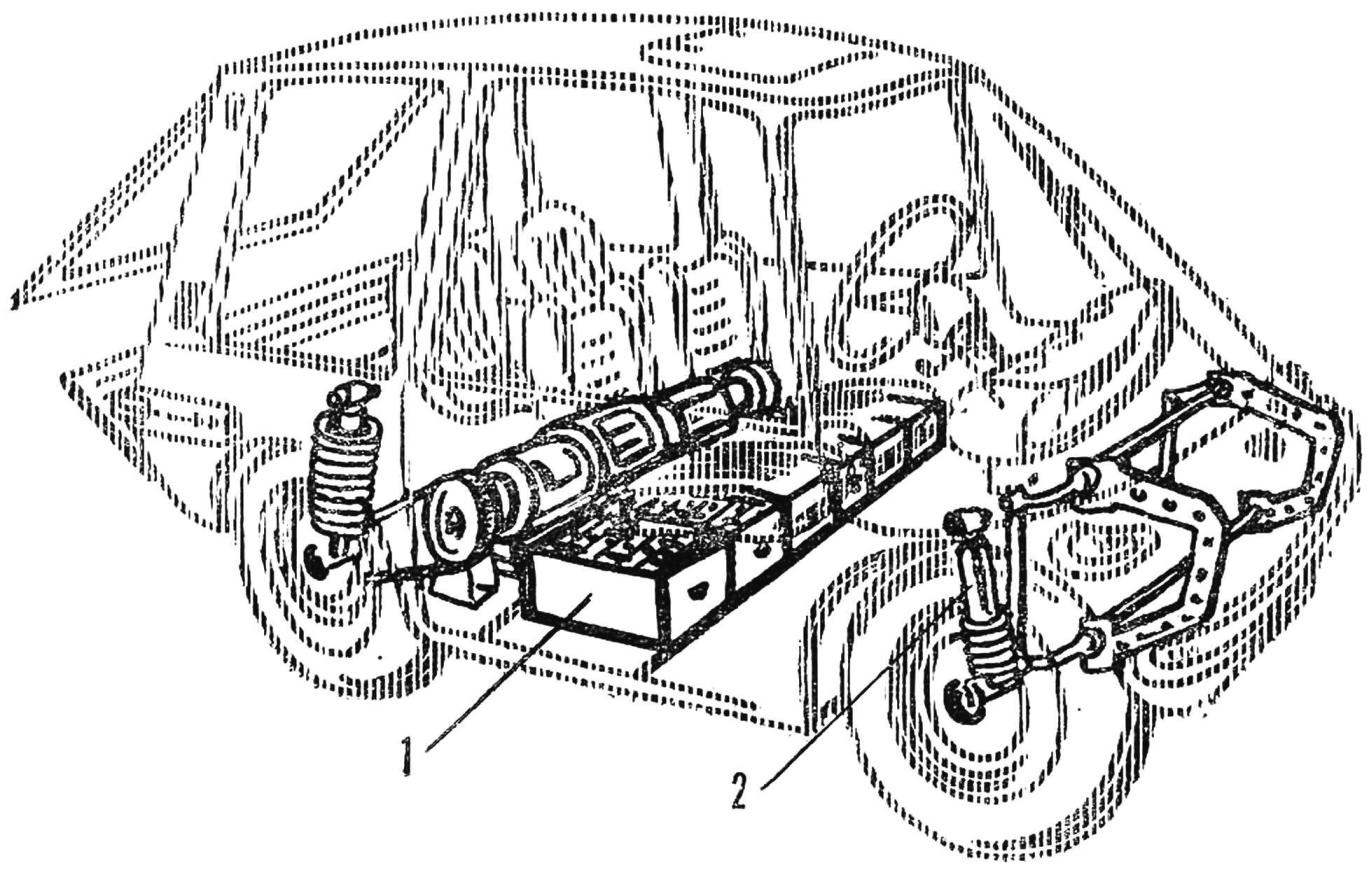 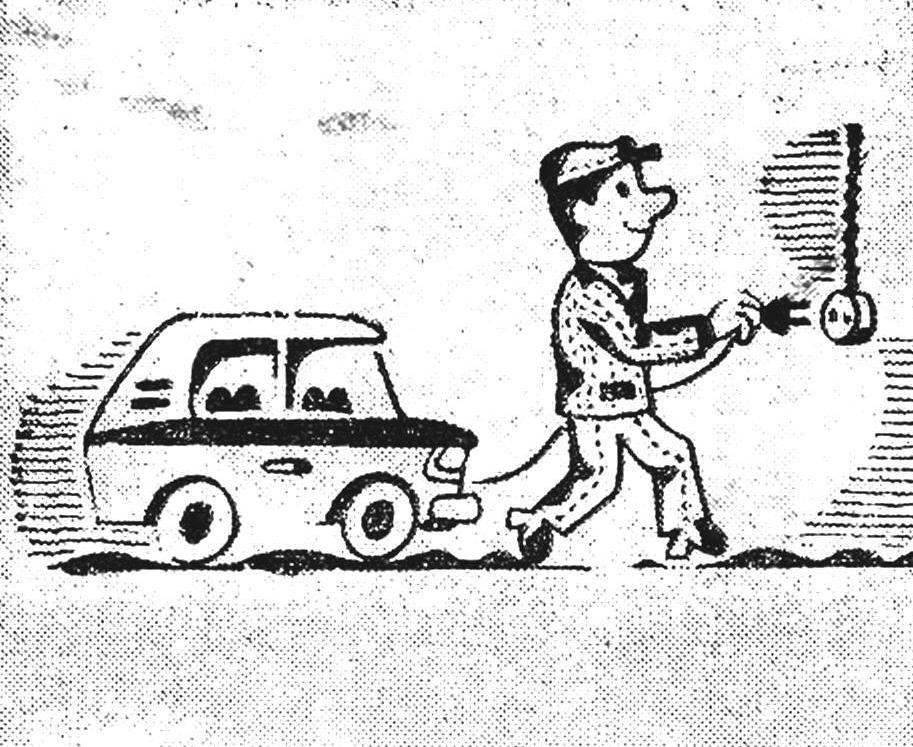 So, our electric vehicle designed. Here are the main options until only an estimate. Depending on types of used electrical equipment electric car at an average speed of 32-40 km/h should have a reserve of 60-70 km and a maximum speed of 65-70 km/h. the length of the electric car of 2.5—2.7 m, width 1.5—1.6 m, height 1.5 m. the Own weight of the batteries and depending on their number from 600 to 800 kg, the load of 350 kg. Theoretical acceleration of the electric vehicle from standstill to a speed of 60 km/h 10-12 s, which is considered quite acceptable for a modern and urban movement.
We have offered you a General outline of the device passenger electric car for the city; variations of the same design and can be unlimited. Initially, you experienced to do the easiest version of the electric, and then gradually complementing and modernizing it, come to the most optimal variant. So, ahead unknown road searches where Amateur designers can find interesting solutions. And the prospects are enormous: the creation of a special light and energy-batteries, light and powerful electric motors the minimum sizes which could be placed directly in the wheels, the creation of new electronic control systems for electric vehicles, the use of AC and convenient charging of devices using only one lever to control the speed and direction of movement of the machine as the electric car of the future, described at the beginning, the creation of durable and lightweight chassis, comfortable exterior modern forms.
Good luck, electric car!
E. KOCHNEV, engineer
THE COMMENT OF THE EXPERT
Problems of electric vehicles was addressed in the “Modeller-designer” in a time when (“large automobile” and was not involved in them. Then, electric cars were interesting cars-toys. In recent years the situation has changed. Electric cars are becoming more and more necessary. Therefore, the number of institutions and factories explores, builds and tests electric vehicles, launching the release of their experimental batches.
Does this mean that Amateur designers now have nothing to do in the field of electric vehicles? It seems to us, on the contrary, it is now possible to study, use and develop the accumulated experience of experts. Whiter — try to solve is not solved their problems.
And there are a lot of problems. Here and relief design of mechanisms and the body of the electric vehicle to reduce its mass, despite the presence of ka it heavy batteries and other electrical devices. Protection of people from shock — in fact the voltage can (depending on the type and number of batteries, their connections) to achieve 200-300 V. the heating Device body, the design legasey battery containers and many more.
Article E. Kochneva gives Amateur designers the essential ideas of the construction of the electric vehicle. In the future we will try to acquaint readers with the modern domestic and foreign electric vehicles: experimental, serial, and… Amateur. And such already is!
Y. DOLMATOVSKY, candidate of technical Sciences, head. the laboratory of the State scientific-research Institute of automobile transport