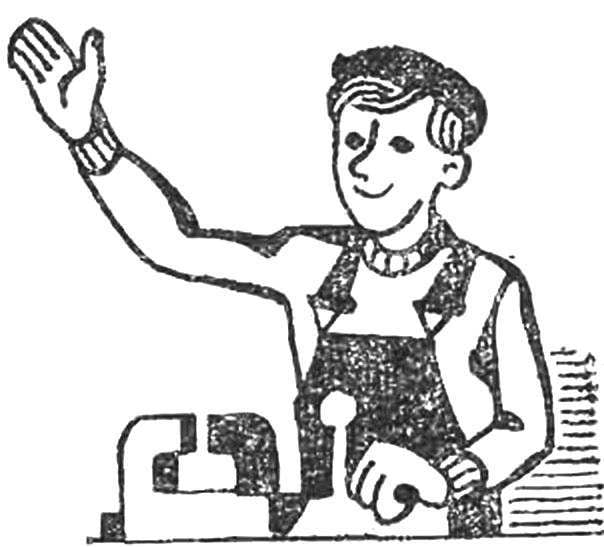 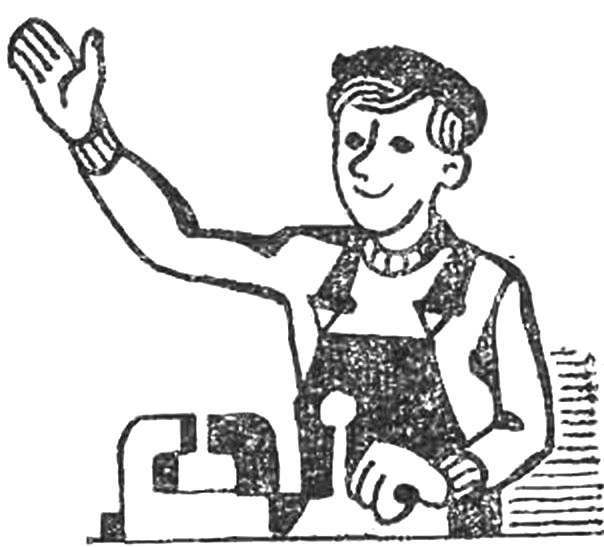 Great interest among specialists of national economy and young workers caused held at the VDNKH all-Union review of achievements locksmiths innovators. This eloquent entry in the guestbook of the show. “Note the great practical value is shown innovative proposals locksmiths, and especially to reduce manual labor, increase productivity and improve working conditions”.
Head BRISTI Mosquitoes, senior engineer Astakos, Chairman of the Board of innovators Fomichev;
the Moscow plant “Banner of labor”.
“I admire the locksmiths exhibition-innovators! How many here are shown useful and instructive for all who want to improve the culture of production, to increase productivity”.
Arkhipov, chief engineer of the Kurgan plant “Spetselevatormelmash”.
“Workers of the Mogilev plant “Strommashina” noted the importance of the exhibition fitters and innovators to exchange experiences”.
Deputy head of the tool shop Evdokimov.
Among his recordings — reviews locksmiths “Elektrostal”, representatives of Strelna manufacturing equipment plant, Kursk plant “Schetmash”, students of the Moscow road Institute, Kharkiv aviation.
Some of the interesting and innovative proposals we described in a previous room. Today we offer young innovators participating in the operation “Introduction” several of the exhibits of the show.
THE CRANE ON THE MACHINE. Locksmiths jokingly say that one detail in the beginning of the shift easier than at the end due to fatigue. Let raise for mounting to machine the workpiece even weighs less than a kilogram — per day these hundreds of grams may be too heavy weight.
This is why Leningrad innovators of the all-Union scientific-research Institute of abrasives and grinding decided to mechanize as upgrade parts for the machine, and its descent, after treatment.
This was developed for small-size universal lift PUM 200 is a miniature crane that can be installed on any machine (Fig. 1). 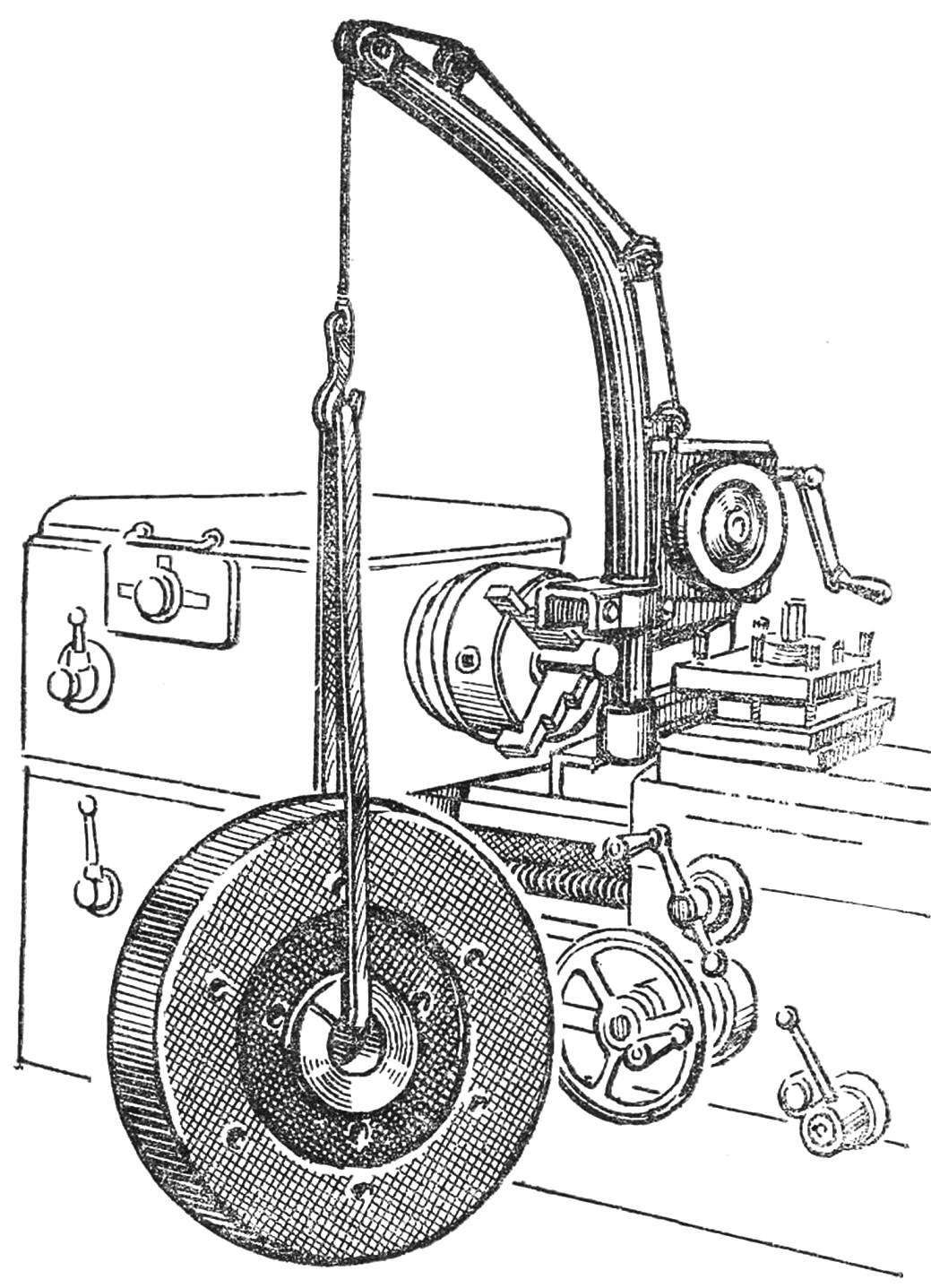 Fig. 1. Miniboden for machine tools
Lift is a small l-shaped tubular arrow with rollers, through which skipped the rope with the hook at the end. It is wound on a drum with a handle, located at the base of the boom. The force exerted on the handle of the drum, not more than 7 kg, but it is sufficient to raise the workpiece weighing up to 200 kg.
The simplicity of the design allows you to gotoviat and use PUM-200 not only companies, but also in terms of selskoy or mobile repair shop. The lift is reliable in operation and is indispensable where machine tools has no stationary lifting equipment! cranes, hoists, telphers. PUM-200 is especially convenient when repairing the equipment for disassembly and Assembly of machine tools. The use of the lift, replacing manual labor, improves productivity by 2.5 times.
“CLEVER” TOOL. Still was only one known key that allows you to tighten the screws of any size is familiar to all adjustable: it sponge can be diluted or, conversely, to close to the required size.
Innovators Vanina M. and E. Solntsev managed to produce an equally universal Allen wrench (Fig. 2). He alone will replace a whole range of old tools, usually used for repair and Assembly work. 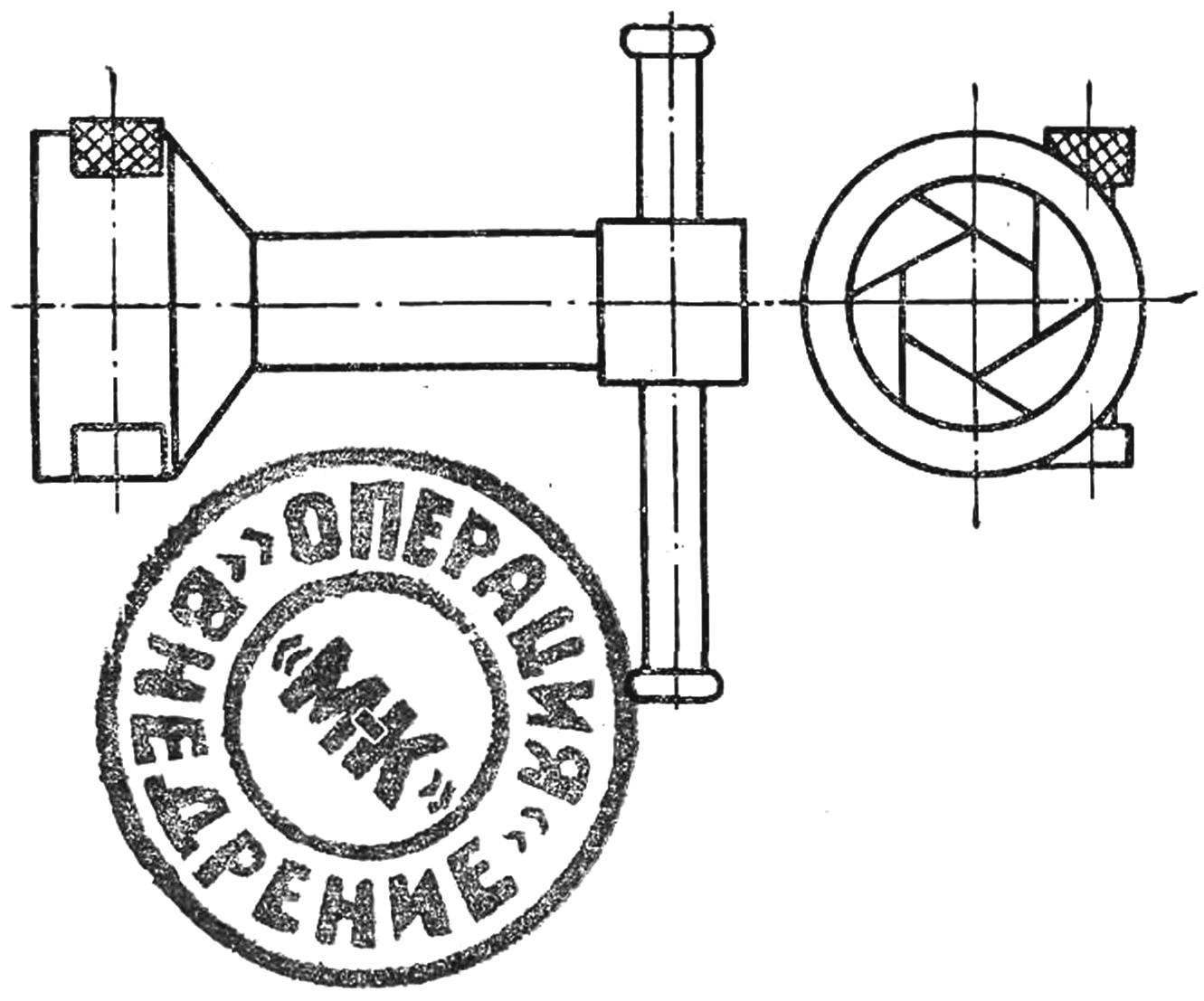 Fig. 2. Universal Allen wrench.
As the figure shows, the new instrument has a housing with knob ends, universal head, comprising incorporated in its round cage moving “crackers”, forming a hexagon. Rotating knurled head adjusting screws, you can reduce or increase clearance between the hex “breadcrumbs” depending on the size of the nut.
This key not only reduces the set of mechanical tools, but also increases productivity. Conditional economic effect of its implementation is about 500 rubles.
Even more savings — up to 1000 rubles — will use the other original key developed by the innovator Vladimir Kolesnikov (Fig. 3). The tool will be appreciated by those locksmiths who have to screw a large number of nuts or bolts in hard to reach areas — the so-called pockets. The fact that here the application of the usual standard keys difficult or unproductive. The new tool allows you to make an effort to it on the free space and passes it to the nut in tight spaces. 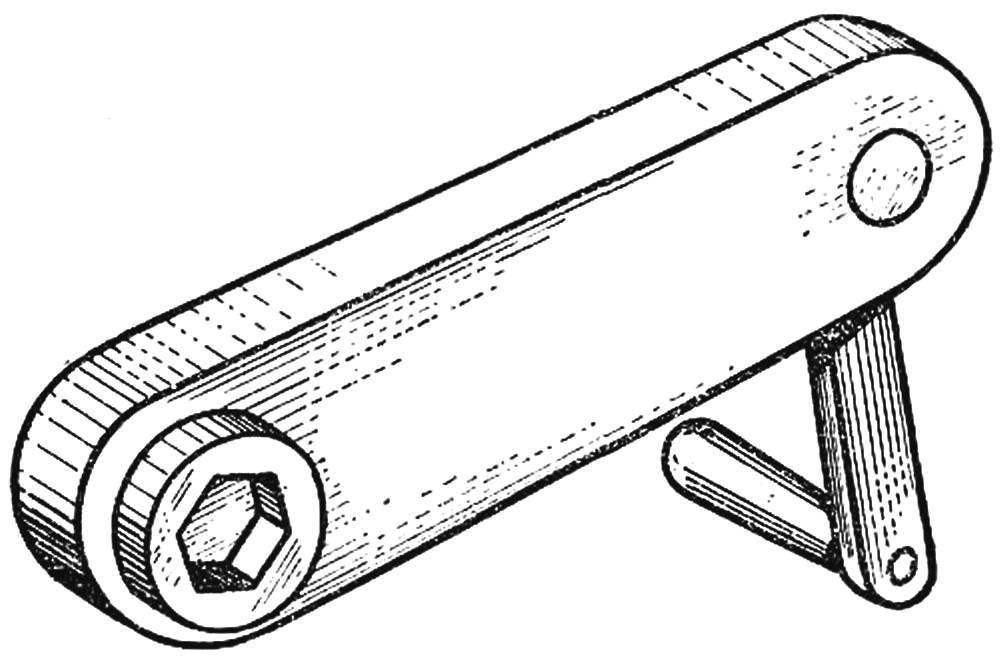 Fig. 3. “Remote” key.
For this complete case “remote” key has two pulleys, connected by a flexible element. One pulley has a socket for a nut or bolt head, is fixed on another rotary arm. This device is very convenient and quite sufficient for the preliminary tightening, final tightening is performed using the standard keys. With several times accelerates the process.
The same purpose is another innovative offer — inertial spillovers developed at the plant in petroleum engineering Petrova. It is known that the hairpin unlike the bolt has no head for screwing. Therefore, until now one of the ways in details was that created the temporary “head” of the end studs was davincibles nut, then the nut. After that, the screwing studs can run an ordinary spanner. This technology is not allowed to increase the productivity.
The new tool (Fig. 4) has two advantages. It has a replaceable head which screws onto the pin, and the lever with the balls at the ends, through which the one rotational effort is enough to account for the inertia of the balls stud was virtuales 6-8 threads. The use of sockets allows you to work with pins of different diameters. 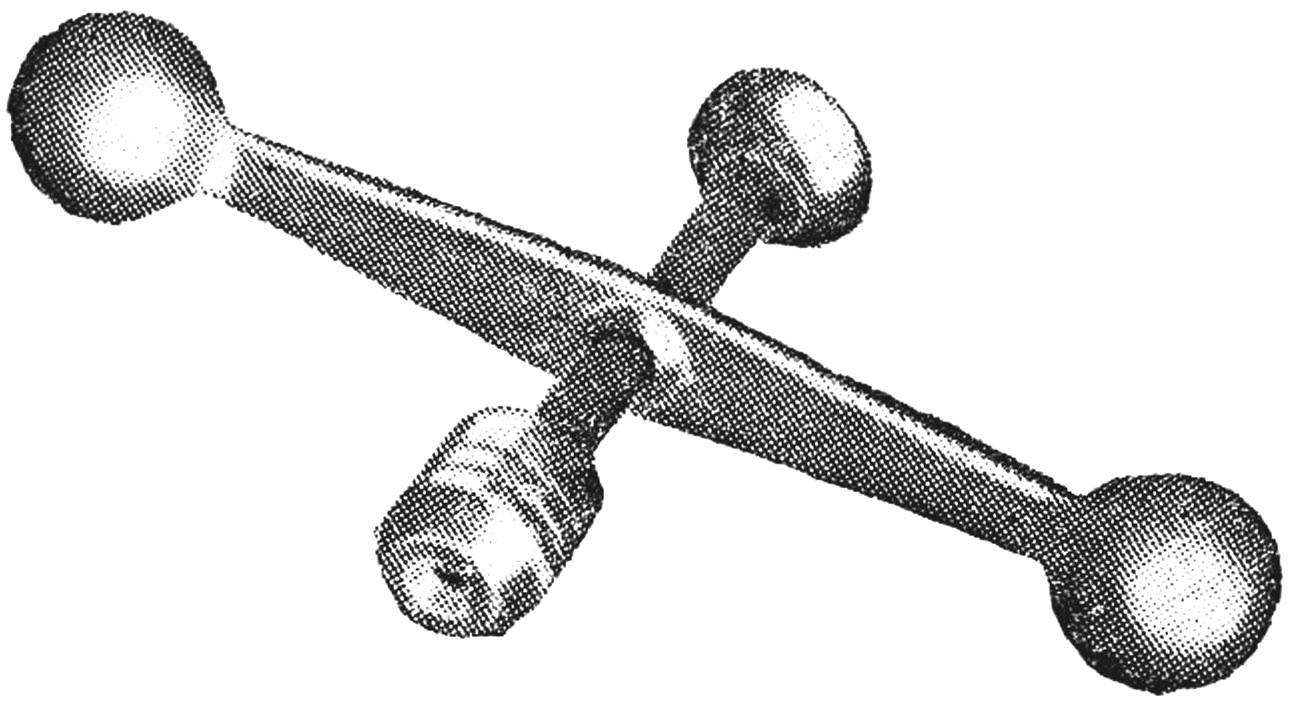 Fig. 4. Spillovers inertia balls.
When using inertial spillover increases productivity, facilitates and accelerates the process of screwing. The annual economic effect — 1200 rubles.
MAGNETIC “VACUUM”. In rare metal parts are not drilled holes. And if it is deaf, not through — not so easy to extract from it the rest of the trimmings. Usually it is removed by blowing the hole with compressed air. However, the chips at the same time, like shrapnel scatters in different directions, which often leads to injury.
Vitebsk machine-tool plant named after Kirov, this problem was solved using a pressure gun. Like a vacuum cleaner, it draws in the chip and stores it in a fabric dust bag (Fig. 5). 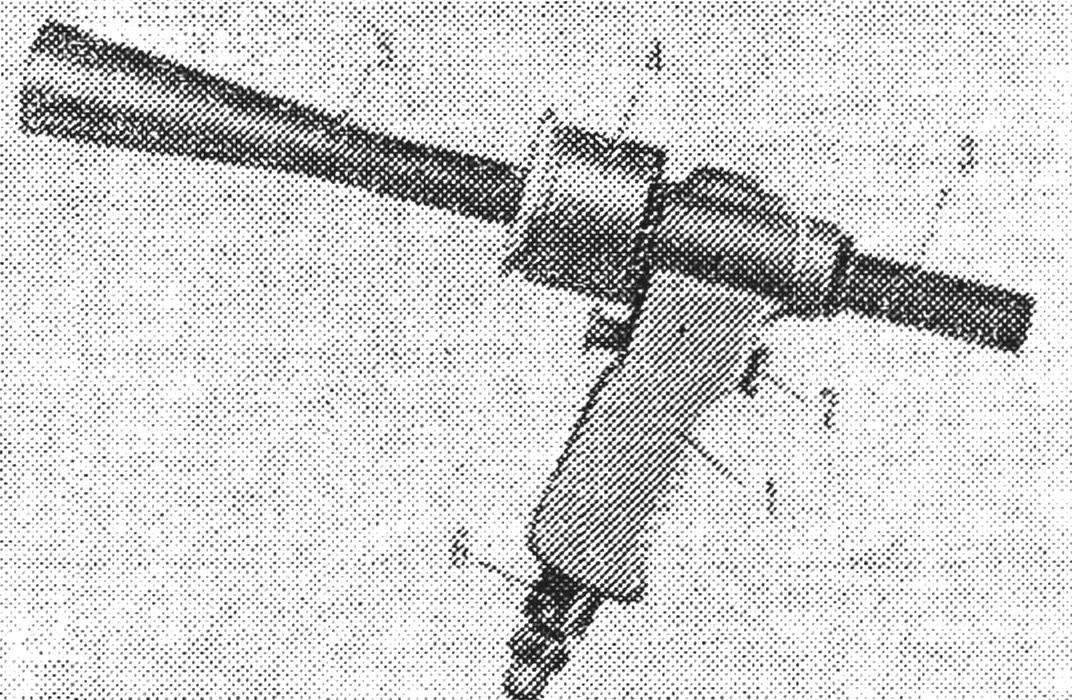 Fig. 5. “Cleaner” chip:
1 — arm, 2 — switch, 3 — suction nozzle, 4 — ring dust collector, 5 — breather 6 — fitting.
Working the gun from compressed air with a pressure of 6 atmospheres, the hollow handle of the tool 1 mounted switch 2, the suction nozzle 3, the ring for attaching the dust collector 4 and the breather 5. To the network the gun is attached through the nozzle 6.
Another very simple option cleaning holes found at the Zhdanov heavy machinery plant named after 50 anniversary of October. Here the same work is done by the magnetic pencil (Fig. 6). It consists of a column of the permanent magnet 1, is installed in a tubular housing 2. The thickness of the magnetic rod “cleaner” and its length depends on the size of the cleaned hole. 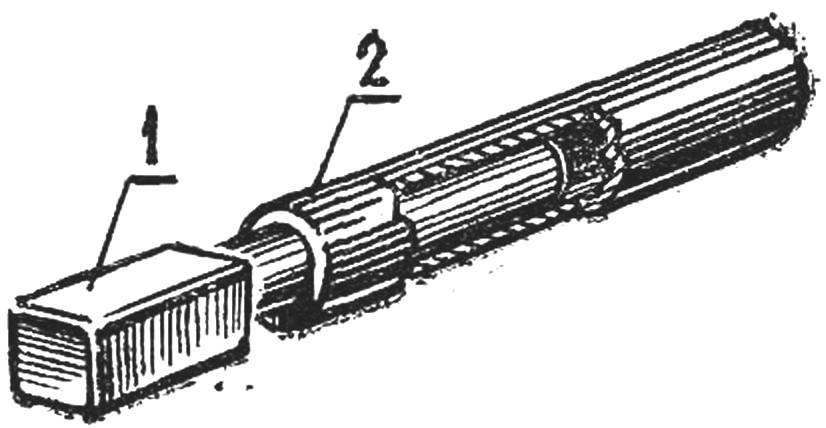 Fig. 6. Magnetic pencil:
1 — replacement the column from the magnet, 2 — tubular housing.
Despite its simplicity, the device also effectively — quickly and safely — remove chips. This eliminates breakage of taps, and increasing labor productivity by 1.5 times.
KNIFE FOR PIPES. Anyone who has had a hacksaw to cut the pipe, knows how difficult and time-consuming this operation. So understand the special interest that the unusual instrument, the pipe cutter is designed So Safranski, designer office snap Vitebsk machine-tool plant.
Fixture (Fig. 7) resembles a clamp, and acts on its principle, since the tube is clamped between the two working bodies, converging under the action of the screw. This cutting roller and two paper feed roller 3, mounted on the housing 2 and is compressed by screw 1. While rotating around the pipe through the roller 4, the groove under the action of the screw gradually deepens, until the pipe is cut.

Fig. 7. Knife for pipe:
1 — screw, 2 — body, 3 — paper feed rollers, 4 — cutting video.
With the introduction of cutter, improve labor conditions, it becomes possible to cut the ends of the pipes in the already collected nodes in trudnostyah. Productivity increases twice.