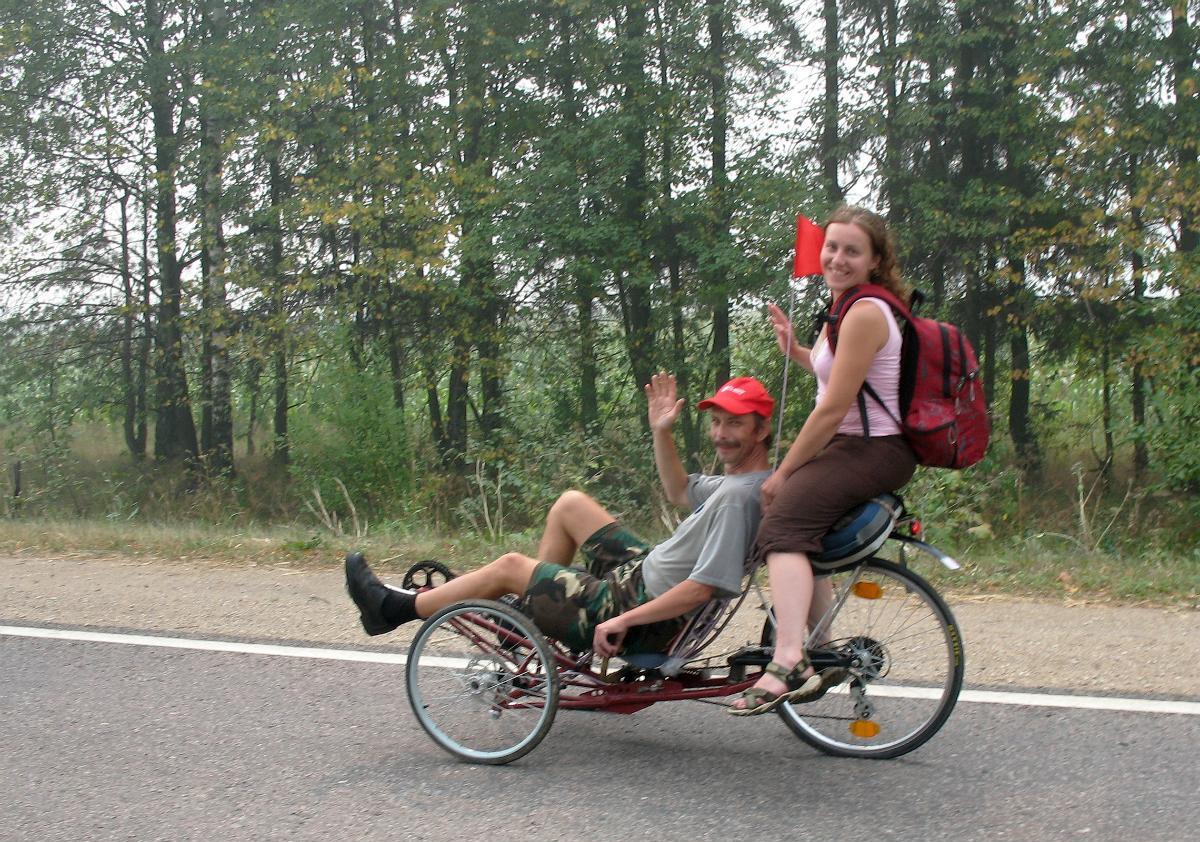 Today for all to see business people, lawyers and politicians. However, there is a sphere of activity for which time is not affected. In the General case it works, and in particular technical work. There are always people, which no adversity can shake their desire to Express themselves and realize their creative plans and projects. Often they are willing to sacrifice for his craft, his passion. And these people are not alone, their genuine enthusiasm is transmitted and other charges gives you the strength for the difficult creative process.
Such enthusiasts will be discussed. Introducing the team, specializing in the design and construction of pedal cars for various purposes. On the achievements of the club, which is called “Tourism and pedal cars,” says its Director Aleksandr KARPUK.
One warm August day in 1993 past me on the street silently and rapidly swept squat machine with pedal drive. After a few days I was able to meet with the designer of this device by Vadim Dunayev. After five minutes by a new form of transport, I realized that I could have a velomobile.
At the end of that year I began to work as the head of the circle of technical creativity. Gradually gathered in the circle of enthusiasts who designed and built our first pedal cars for everyday trips around town. 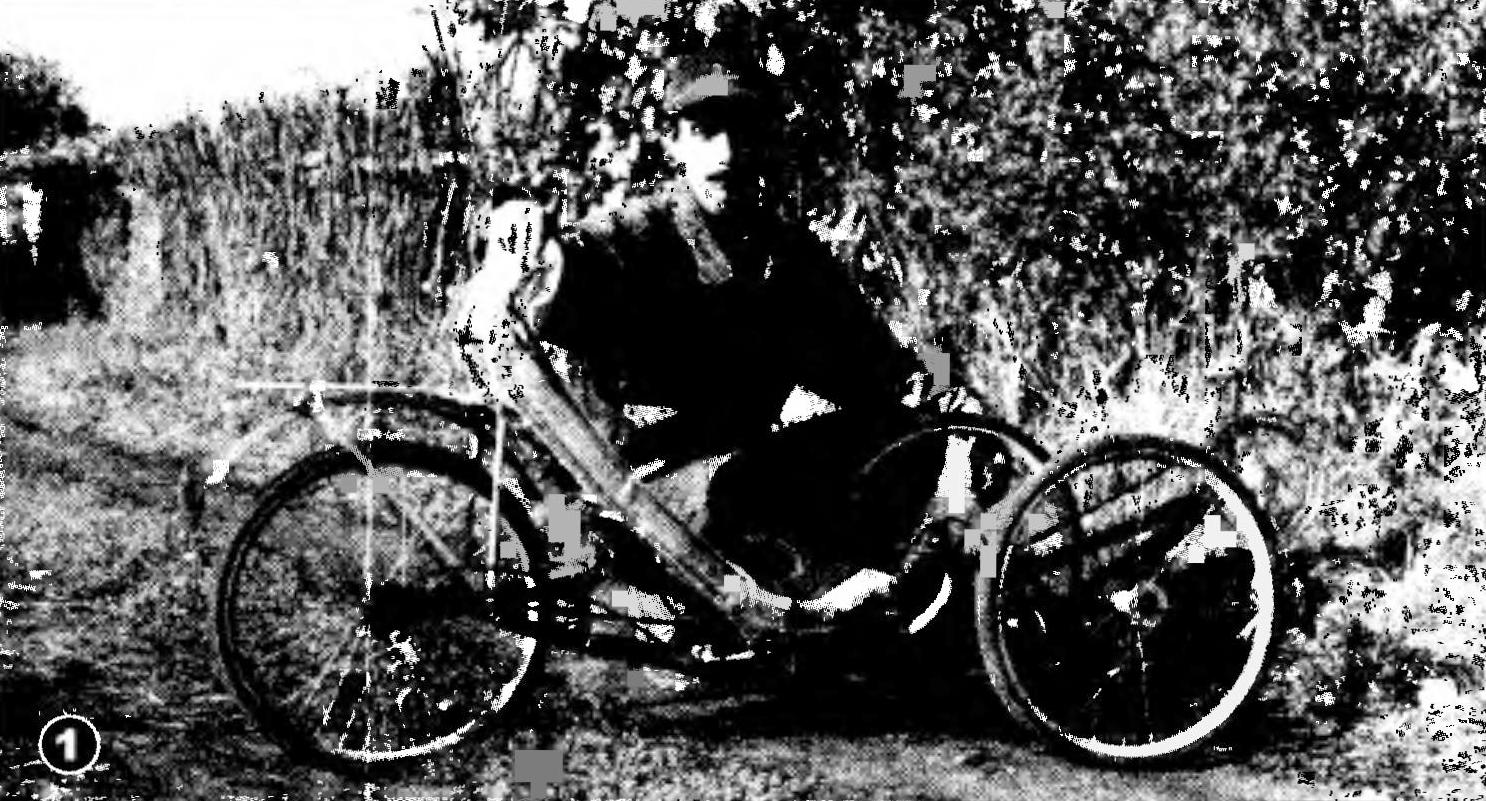 Universal recumbent (designer Aleksandr KARPUK) weighing 22 kg with a spatial frame of the rear suspension. The seat is adjustable for back angle and distance from pedals. The wheel under the seat facilitates the landing of the driver.
The clearance is quite small (105 mm) and no hanging of any protruding elements allow you to drive on many roads at high speed. Multiplying the intermediate transfer speeds of up to 42 km/h. front Track wheels 650 mm. Recumbent has a coupling device with the trolley, which is used to transport heavy loads.
The designer with his car participated in all club events. Total mileage since 1995 — about 12 000 km. 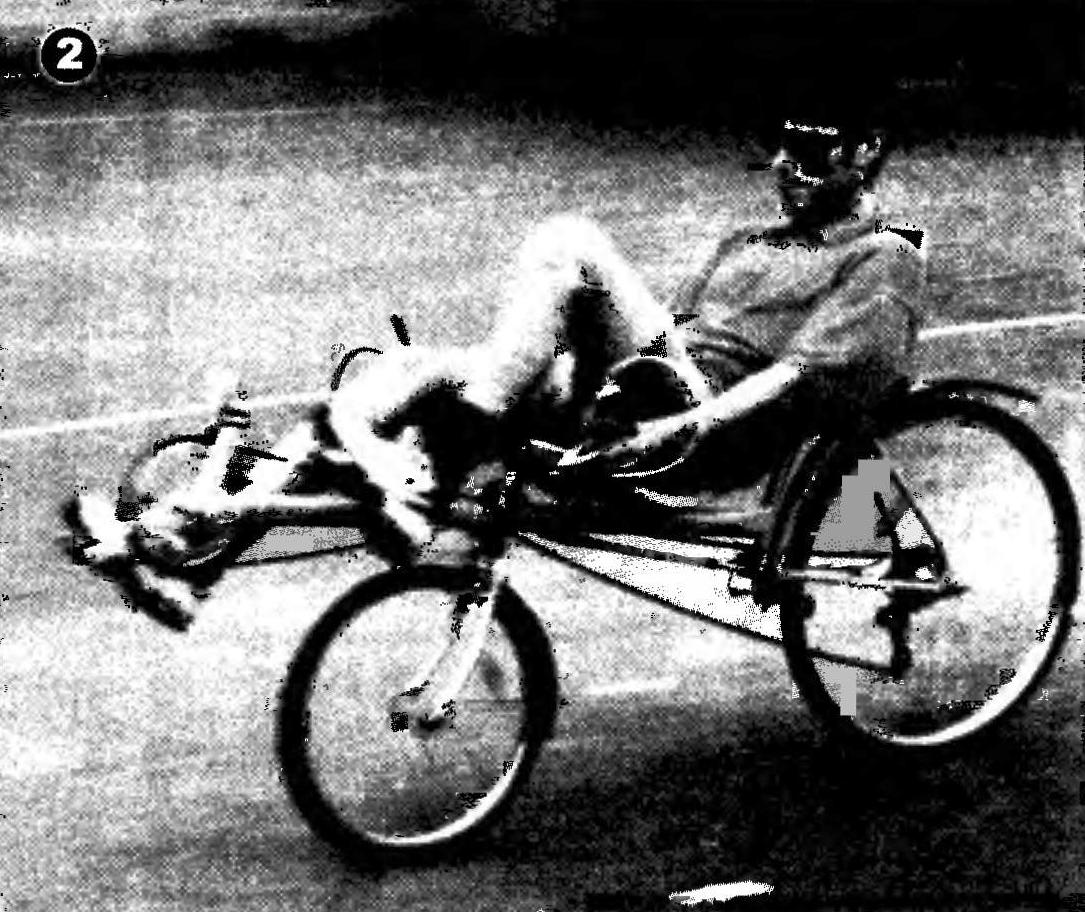 Two-wheeled recumbent (designer Vadim DUNAEV). This is a pure sports machine weighing only 14 kt. While its soft seat, thanks to an interesting technology, weighs only 800 g. the recumbent Speed of 50 km/h. suspension Stroke rear wheel 30 mm, but this is quite enough for comfortable movement with high speed on almost any road.
By the way, practice shows that learning to ride a recumbent is not necessary: control handle beginners of any age and physical fitness. And for admission to the wheel does not need rights, sufficient knowledge of traffic Rules.
After difficult not only for technical creativity, but for the entire country club was closed, we are at your own risk created a club called “Tourism and velomobiles” and have continued the begun business.
We wanted to create a simple, reliable, reproducible and meet the “Provisional technical requirements for velomobiles” machines. And most importantly, lightweight and compact, so you can raise them in a home Elevator and store in an ordinary apartment. Along the way, tried to generalize and systematize the design information about individual nodes and mechanisms of velomobiles.
I must say that in the Amateur building caught on two main schemes of single-karts
One of them is the scheme Mazurchak. So named by author, published at the time in the journal “modelist-Konstruktor” fundamental article, and then inspired many Amateur designers. The author in an accessible form has expressed his views on design and technology of construction of pedal cars with the front leading and the driven wheel. The simplicity and adaptability of such machines have many supporters. We also tested the scheme Mazurchak (photo 4).
Pedal cars, meet the second diagram (rear sprocket), is much more complicated, more expensive to build, but with much more comfort and opportunities for upgrading (photo 1, 2, 3, 5).
From the beginning of our fascination with these machines it became clear that with all the possible variety of forms any velomobile consists of a set of model nodes, which determine its speed and performance, reliability and durability. So a lot of time and effort in our circle of technical creativity spent on the development of the so-called “designer velomobiles”. That is, a set of model elements (quick release side wheels, steering blocks, suspension components, bushings wheels, carriages, intermediate gear, press rollers, etc.), which are suitable for installation on a regular bike. Even a newbie, using them can in a short time to collect a velomobile or similar car with a muscular drive. All devices in the photographs, assembled from such elements. 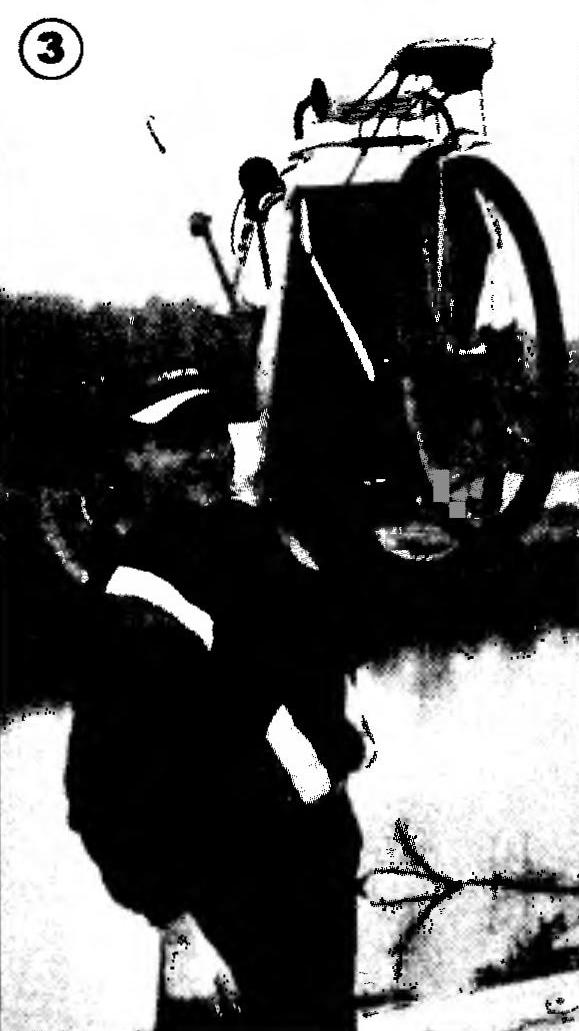 A good versatile velomobile(designer Vadim DUNAEV). Frame in the form of complex spatial farm withstands high loads. The seat is adjustable both in the distance to the pedals and backrest. Front steering with the handlebars, brakes, shifters, rear view mirror and an audible signal is very convenient. For landing on a recumbent wheel can be pushed forward.
Large-angle self-steering knuckles allow you to ride a recumbent freely without touching the steering arms, and to control only the tilt of the torso. That’s useful in long trips. Front track wheel Base 1050 mm 640 mm rear suspension travel 30 mm.
Recumbent assembled in 1995 and is widely used in almost all club events so far. 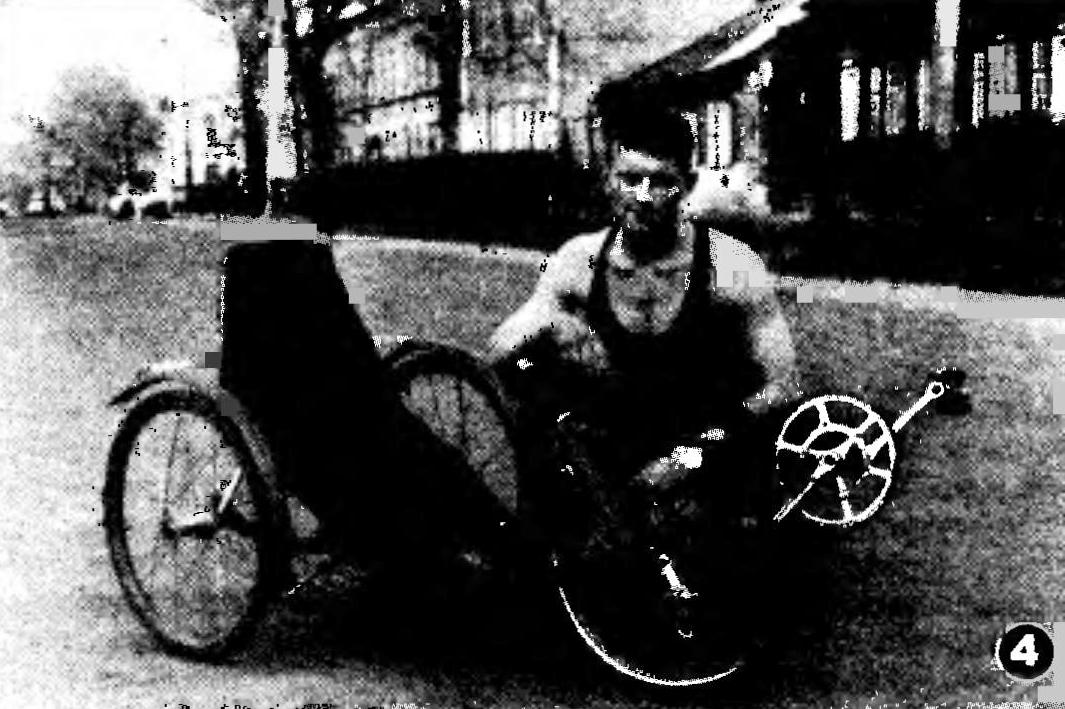 Front wheel drive recumbent (designer Aleksandr KARPUK). Simple, reliable and unpretentious machine weighing only 18 kg On it a driving wheel installed “Paterik” stars (14x16x18x20x22 of the tooth). Sprocket has 53 teeth. Maximum speed 45 km/h. rear Track wheel 640 mm.
Ideally located, the trunk can hold up to 10 kg of cargo. If you want to carry more cargo, recumbent hangs on a special trolley, which can take up to 100 kg. Recumbent — participation in all club events. Heavily used since 1996.
In the picture — the current owner is recumbent and an active member of the club Alexander SERGEYEV.

A sporty version of the velomobile (designer Vadim DUNAEV). The machine has a spinal frame of large diameter pipe with minimum number of welds. The seat is fixed, fixed, made, tight fit of the driver included in the power scheme of the frame.
In the pursuit of speed midship cross-section of the velomobile is reduced to a minimum, which front driven wheel pressed to the body (they track only 560 mm). To achieve minimum ground clearance (60 mm), in the chain drive applied to the dewatering rollers.
All this coupled with low weight (about 18 kg), a large number of speeds (twelve) and proper balancing allowed on good asphalt to reach the speed of 45 km/h. However, the low ground clearance and lack of suspension damping designs do not allow long ride with such speed.
Now our designers with their velomobiles are quite often invited to promote technological creativity and healthy lifestyles at various cultural events held in Tambov. The club members, guests and participants of many children’s parties, exhibitions and competitions.
With the growth of technical perfection of our designs were possible, and Hiking on the velomobile. The most successful of these was organized in collaboration with local “green”. The longest run under the name “the Green ring of Tambov region”, devoted to 200 anniversary of the Tambov province, was held in August 1997.
For twelve days running, a group of participants on the three pedal cars and one maintenance car covered about 1000 miles with no breakdowns and accidents, visiting almost all the major settlements of the region. Thousands of people not only saw the velomobiles, but also ride on them. Along the way, all along the route was tested a new way to assess the state of the environment biomonitoring method. After processing of the results was the map of pollution of the Tambov region.
In 1998, our pedal cars have been in the nearby regional center of Lipetsk. And a year later the group of five people on four pedal cars and one moped was capable and such a complicated route, as Tambov, Voronezh and Zadonsk — Lipetsk — Tambov length of about 600 km.
A. KARPUK, Director of the club “Tourism, and pedal cars”, Tambov