Invented and built unusual to our eyes the car of the students of the Moscow automobile and road Institute N. Belov, N. Dubinin, Yu Medovikov, A. Ortega-Gil and O. Khokhlova, under the leadership of Professor A. Narbut. In may 1983 they moved their offspring to the street, right on Leningradsky Prospekt. Drove along the facade of the MADI. The reaction of passers-by was clear — a genuine interest.
Central television in the program “This you” gave the opportunity to millions of fans of technical creativity to see design students and get acquainted with its device. And for those who are interested in “MADI-BC1” more deeply, we offer the description and drawings, prepared by one of its founders, now a graduate student Yuri Medovikov.
Passion for the pedal cars we have in the country is a new phenomenon. Demonstrations on them were first included in the program of all-Union festival of Cycling in šiauliai only in 1983. Participated a half dozen machines from the nimble Cycling card to the “Vilnius-82”. Was presented and our “MADI-BC1”.
It was designed as a sport, “BC1” in its name stands for “recumbent sports, first.”
Analysis of known structures has shown us — this is easier to do. And the results achieved there can be higher than on the road. However, we didn’t have to break records. Wanted to find out the advantages of pedal cars, so focused on the speed of 70 km/h is also quite high threshold.
This speed is achieved, firstly, by polulezhachee of landing a driver in the seat of the velomobile, which engages the muscles of the body, idle when riding sitting down. And secondly, thanks to the good aerodynamics of streamlined booths. But already at speeds of 30-40 km/h the air resistance increases so that the rider can not cope with it.
LAYOUT. We stopped for three-wheeled variant that can work without the shock-absorbing suspension. The wheels are placed as follows: steering in the front of the building, leading back outside. Of course, it is preferable to have them all on the outside, because the aerodynamics of a sealed enclosure better. Otherwise, there is the loss of inhibition in the cockpit of air flow. However, we had to sacrifice speed for the sake of simplicity.
Stability is not affected, since the center of gravity we have tried to position close to the back of DOS. In addition, the load on it is greater (about 70% of the weight of the velomobile has the rear wheels). Consequently, the thrust force and maximum speed.
A drawback of our scheme is that the PA chassis shaft needs to be differential, rather complicated. But we simplified the design, using standard Cycling one-way clutch.
Weight 63.5 kg. She has a sleek hull made of fiberglass, hinged transparent lantern. The rear part of it is made from the cockpit of the glider, the front is hand made. 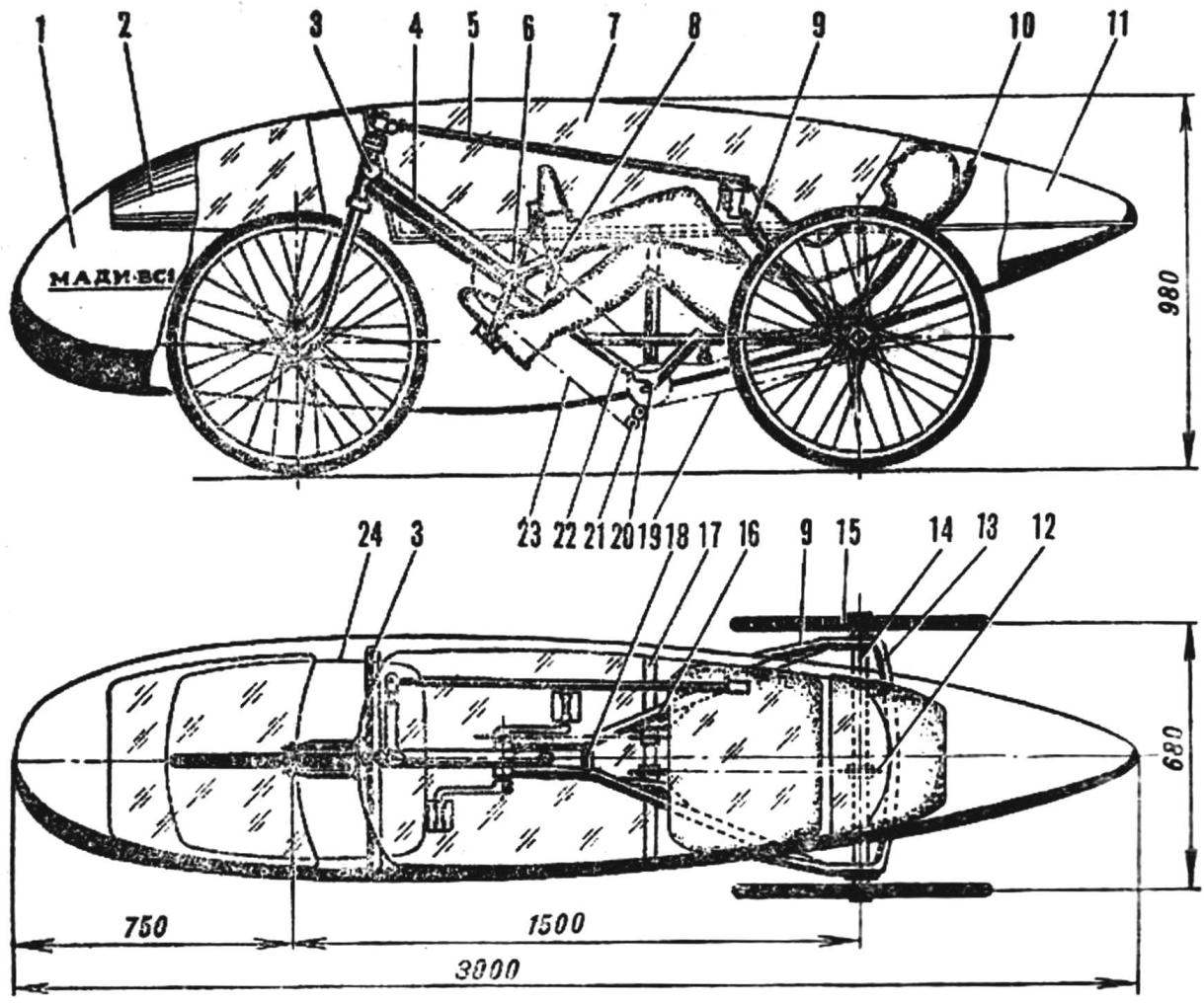 Fig. 1. The layout of the velomobile (the brake on the front wheel not shown):
1—the front of the cab, 2 —windshield 3 — horizontal shoulder mount, 4 — lower reinforced beam, 5 — track rod 6 — pedals, 7 — fold cover, 8—rear derailleur, 9 — pull fastening to cabin, 10 — headrest, 11 —rear of the cab, 12 —sprocket driven. 13—arc stiffness, 14 — way shaft, 15 —wheel, 10 — brace, 17 — mortgage crossmember Assembly 18 — spacer, 10 — back chain, 20 — the axis of the gear 21 are idler rollers, 22 male, 23 — front circuit, 24 — a cutout in the floor under the front wheel.
The chair is also plastic, consists of a backrest with headrest and seats that are easily removable, for example for the inspection of the transmission. The knees of the driver, reclining in a chair are at eye level. It would seem that they should close the review. However, nothing like this happens. I had to make sure not only our, but also on the Vilnius recumbent. Notice other obstacles, and the feet do not pay attention: flash your knees so that they can not be seen.
Cab floor is made cutouts for the driven wheel and chain transmission.
FRAME collected with the help of gas welding from parts bike “Sputnik”. Front fork left unchanged. To the steering sleeve is laterally welded to the tubular horizontal shoulders for attaching to the body.
Bottom beam connecting the steering and pedal bushings, reinforced with a section of pipe of the same diameter — the weight is great. From pedal bushings departs 150-millimetrovie piece of the frame that you saved to install it the front shifter.
Below the pedals, fork, rear wheel, only instead of axis at the end she establishes a mechanism of change of gear. For greater rigidity of the feathers of a fork around the middle connected by a spacer. From her back are pierced the wall of the cabin the large struts. It is welded to the bearing races. There are welded and pull the rear of the cab and arc stiffness.
There are still elements that connect the frame with the cabin, is a cage cross member. They depart from the rear of the plug, and repeating the curvature of the sides of the cab, adjacent to them. The crossmember for the” made in the side — bonded strips of fiberglass cloth impregnated with epoxy resin.
TRANSMISSION is made in the form of a double chain transmission Bicycle type. We stopped on. this drive because it was possible to use standard ready-made parts. This is a major advantage compared to the makeshift rope and swinging drive pedals. By the way, all record velomobiles equipped with a Bicycle drive.
Anterior branch transmission fully — pedal, a large sprocket, bushing rear wheels, the overrunning clutch with the “Paterikon” (a set of five stars) — from a sports bike. Sleeve coupling, however, differs in that to the left of its flange are welded one, leading the second branch of the sprocket with 28 teeth.
Small sprocket on the foot node (32 teeth) is taken from the “Eaglet”. Boarding her hole bored under the shaft of the pedals, and the body drilled five holes for the mounting bolts to the big sprocket. It expanded the gear range (from 0,375 to 0,137) and thus facilitated tro-ganie and move up the hill.
Despite the fact that the difference in the size of the pedal sprocket large (51 and 32 teeth), the front derailleur from a sports bike with a cable drive and a “lever” works well.

Fig. 2. Chassis shaft:
1 — the landing ring. 2 — hub (road bike), 3 — the bearing. 4 —ball cage. 5 —pull, 6 — sprocket driven, 7 — protective washers, 8 — hub, 9 — bolt, 10 — the shaft. 11 — sleeve bearing 12 — thrust bearing, 13 — finger running shaft, 14 — details of the overrunning clutch. 15 — angular contact ball bearing, 16 ~ cone washer 17 — nut and locknut.
Back — switch type “derailer”. Thus, we get ten transmission with extended range.
The posterior branch drive is a device for transmitting torque from the drive sprocket of the gear on the driven sprocket (14 teeth) chassis shaft. This branch has a drive roller tensioner. Appropriate, apparently, to install a washer, preventing the chain from falling not on one but on both sprockets.
SUSPENSION SHAFT (Fig. 2). Its design difficult. However, the most critical parts taken ready-made from bicycles. The shaft itself is a hollow pipe on which are fixed the driven sprocket and the wheel. Rotates in the clips is pressed into the bearings from road bikes (so you can use the one-way clutch). The coupling serves as a differential. Wheels from a sports bike.
STEERING. Instead of steering column reinforced lever and long tie rod (Fig. 3). Special attention was paid to the elimination of backlash in the joints.
A Bicycle brake such as tick-borne, but only on the front wheel. It is not excluded the possibility of its installation on the rear. 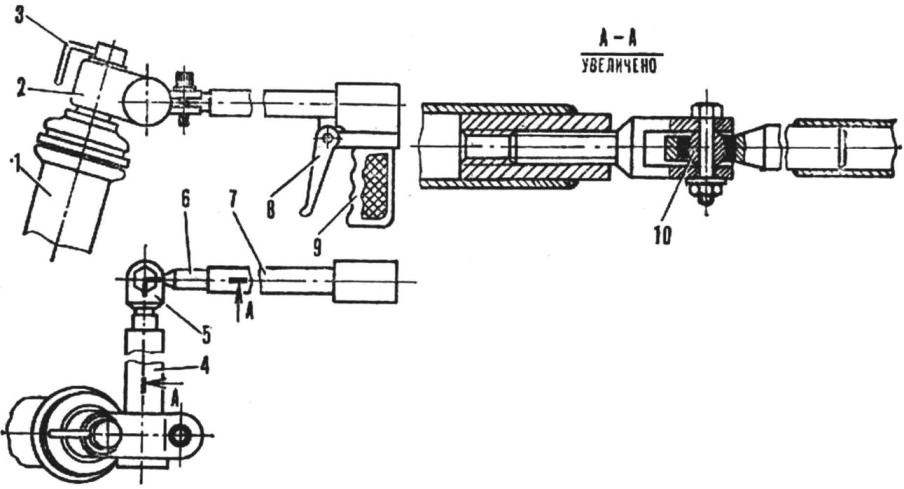 Fig. 3. Steering:
1 — steering column. 2 clamp, 3 — eaim. 4 — control arm. 5 — hinge, 6 — joint end, 7 — tie-rod, 8 — brake lever, 9 — lever control, 10 spherical joint.
As the speedometer used the Ergometer, purchased at the sporting goods store. On tests of “MADI-BC1” developed a speed of 59 km/h And already in the first races.
As you can see, the recumbent is quite simple structurally. It has good performance, stability and controllability.