For residents of the Urals, Siberia, North, Far East (that is, the most part of the country) the need for such a car, as the Rover is simply a vital necessity. The reasons are many: good roads are few, the terrain is rugged in the winter almost six months of deep snow, and in the off-season and even during summer thaw. To get a car, not afraid of off-road, always wanted me. Of course, corporate SUV, for example, “field” on the tires (this machine is already twice as expensive as usual) — I can’t afford. However, (probably from the perfectionism of my character) and a homemade all-terrain vehicle (one of those that often collect enthusiasts with their hands), and that the car is difficult to call, I, too, was not satisfied: I wanted to have something more.

The idea for the unusual design of the machine was born quite unexpectedly: I saw on the street standing by the car “Zhiguli” with him leaning against a wheel repaired near the GAZ-66.

Such wheels can ensure quality, which is easy to achieve high off-road capability: small specific ground pressure, reliable with them-grip tires, high ground clearance. But reasonable comfort would the vehicle body and its interior.

In addition, both part of the plan was quite feasible, since not associated with any deficit. After all, every day there are more older cars on which the owners are willing to give and inexpensive to sell. And in the hands of a machine can gain a second life: restore any domestic car from virtually scrap metal on the shoulder a lot of homebrew — it’s only a matter of time and money on spare parts. 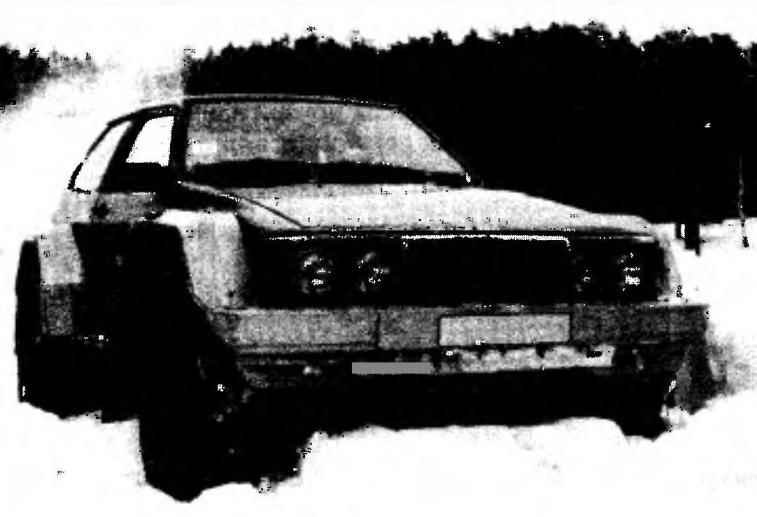 For me, the creation of the vehicle was more and test their own engineering skills. After the appropriate analysis (weighing the real possibilities) I decided that the most appropriate body for an SUV — from the car VAZ-2108. In fact, I got been refining the front part and the bottom (chetyrehdverny body would need a more significant rework). The engine compartment began to lengthen. It was demanded and wheels (larger diameter than standard) beyond the front of the envelope, and the engine, now located along the axis of the machine, like “Fields” and “classics”, instead of across, like front-wheel drive “eight”. But the appearance of the car is the lengthening has not spoiled — transverse weld seams were covered with new wings and bonnet. The last is taken from the old “Moskvich-2141”, respectively modified and aligned.

In the bottom of a cabin in the middle of the cut longitudinal opening, and above it is welded the casing, thus making the tunnel for the units and transmission units. Its dimensions are the same as the “Fields”, so the pattern of the scanner casing did spread noise insulation pads of this machine. The front body panel (between the engine compartment and interior) reinforced extra pads and braces.

Nakryski jeep (in pairs: front and back) — mirrored. For their manufacturing business:, cardboard templates, fit with the body edges were carefully shaped to its contours, and then on the templates themselves nakryski. They are made of cold rolled steel sheet with a thickness of 0.8 mm. was Bent by hand, so their surface is quite simple — conjugate plane. Rigidity is ensured by continuous (throughout their length) flanging of the free edge. The other edge (cut on lines) nakryski welded to the respective body “wasmerely” wings, after which some of the latest in wheel wells have been cut along the contour first.

Footrests (in the form also mirrored) is made of steel sheet thick 1.5 mm (flanged for rigidity). They are welded to the lower flanging available to the joints of sills and underbody. The pegs themselves are made with steps; ground clearance they do not reduce, and add. In addition, the steps cover the base space and create a more squat appearance to the vehicle. Below footrests are not slippery, their external edges are covered with rubber.

Bumpers, both front and rear made the entire width of the machine. Each of them consists of two emergency (car repair shops). The ends of the bumpers coupled with nacrelli.

The engine is from a passenger car VAZ-21011, deforsirovan to a compression ratio of 7.6, which allows to use low-octane gasoline A-76 and AI-82.

As already mentioned, under the bonnet from the VAZ-2108 engine now, unlike the standard, located longitudinally. To install had to fabricate from steel sheet 2 mm thick special transition subframe.

Drivetrain with its basic units and components — clutch, transfer case, driveline — used car Niva — VAZ-2121. Transmission (a four) from “Zhiguli” (VAZ-21011), “Niva” units it connects without alterations. Since the base machine compared to the “Niva” has increased, the propeller shaft from the transfer case to the rear differential had to install longer — from the car “Moskvich-412”. From the differential the torque is transmitted to the wheels of two axles of the car “Niva”.

Transmission from the front differential to the wheels — open shafts with hinges of equal angular speeds, too, from the VAZ-2121.

For pivotally connecting the rear axle to the body had the control rod to lengthen, making some of them insert or cook one of the two.

Wheel (that the motorists, and many professionals are often called discs) are taken from the old minibus Polish production of “beetle”. Their rims are worn (with the “departure” in the outer side) and welded another rim and improvised flare steel 2.5 mm sheet. Width of the new wheel rim is 254mm (10 inches), rim diameter — 457 mm (18 inches). The tires on them are fixed split rings, like on trucks. Bore holes in the discs are the same size and location, the “Niva”.

The tires themselves chamber, diagonal, high profile, low pressure (in front and 0.8 in rear — 0,7 bar). The size and tread pattern (“herringbone”) tires are the same. as the truck terrain GAZ-66.

Brakes — from the “Fields”, with no alterations, dual circuit with vacuum booster; front disc, rear drum.

Steering — Assembly: mechanism — from taxi GAZ-24 “Volga”, drive — UAZ-469. This combination is not caused by some necessity, just the knots I had in stock. 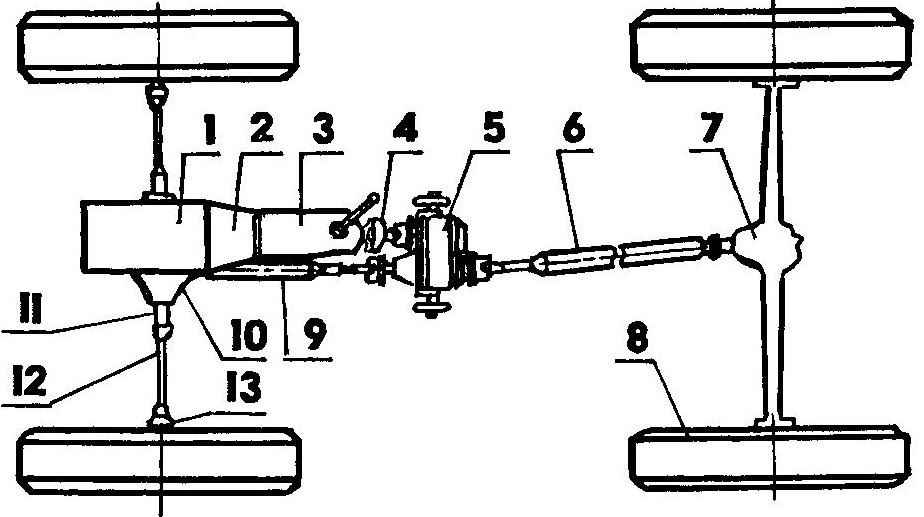 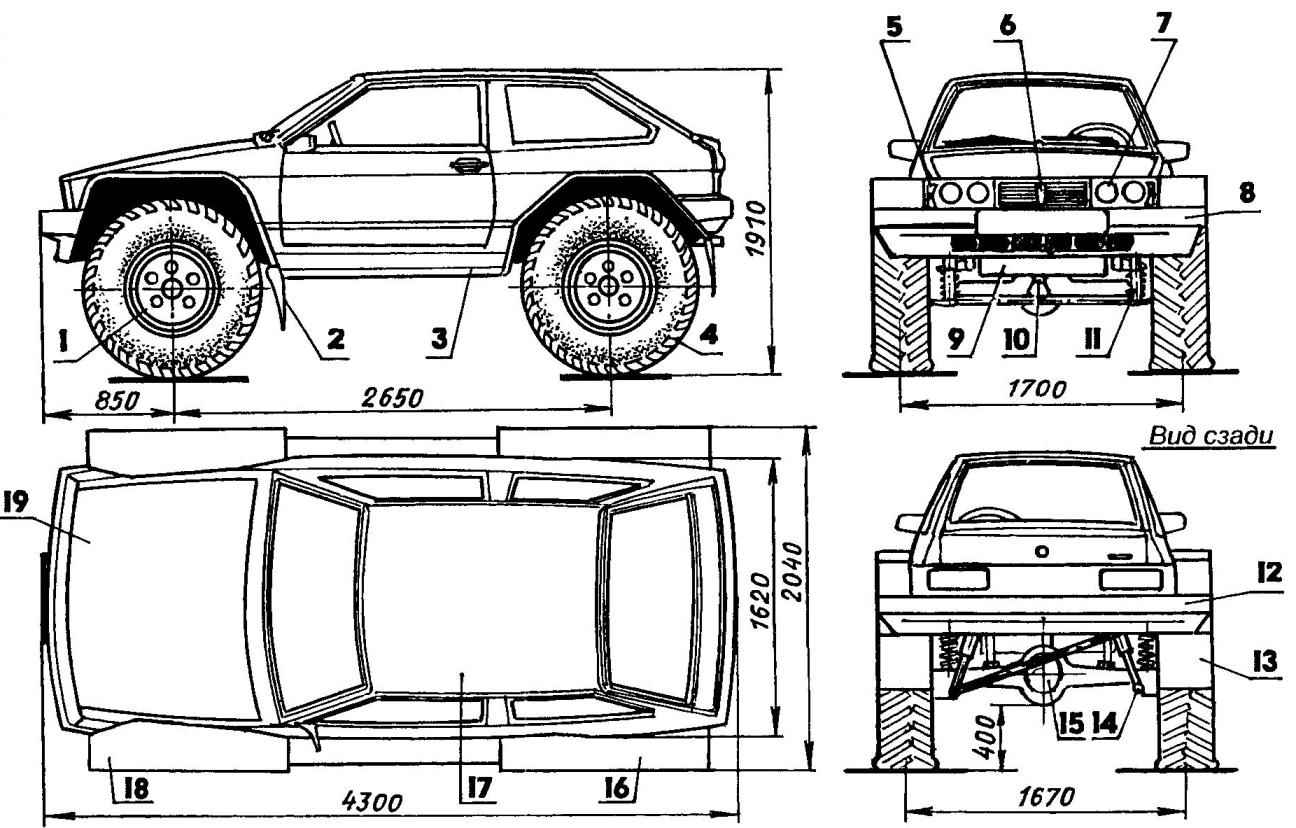 General view of the Rover:

Curb weight, fully fueled and fully loaded jeep all-terrain 1330 kg dimensions indicated in the figure the General form. The maximum speed compared to the base cars has decreased slightly and is around 120 km/h. But since the machine is designed for operation and off-road — even this much. But the throttle response is low: with a driver and a passenger, the car accelerates to 80 km/h in 35 seconds. This is due to the engine power.

Ground clearance (clearance) is increased and is 400 mm.

In addition to four passengers the car can carry another 50 kg of cargo.

The color of the vehicle is two-tone. The body is painted in its “original” cherry blossom, and bumpers, nakryski and footboard in light grey.