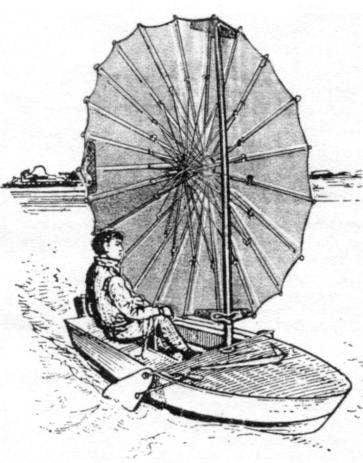 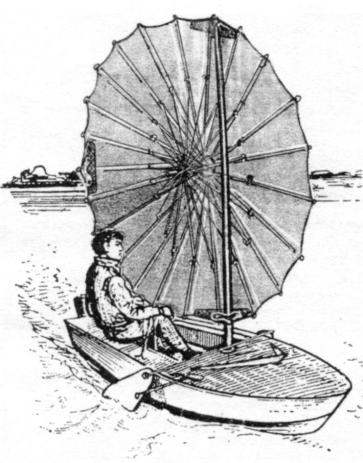 I think that the idea of using the umbrella as a sail come to mind to anyone who has solved it in a strong wind. However, the first whose attempt to use the umbrella instead of sail was in due time recorded in the journal “modelist-Konstruktor”, was Georgy Arbuzov, one of the pioneers of Windsurfing in the country and Chairman of the section of Windsurfing at the FPS of the USSR.
In the mid 1970-ies he made his sailing Board, but to test it on the water it was not possible – the mast was not yet ready. Then George instead of sails took a big umbrella, and it turned out that the windsurfer with this improvised driver demonstrates good driving performance. However, at that time the idea hard round sails further development has not got to competition was allowed only classical windsurfers. * * *
Meanwhile, many years later, the idea Arbuzov was implemented on a compact Dinghy (or rather, umbrella-bot) simplified construction. As the sails that use the sun umbrella with a diameter of 2 m and, respectively, with an area of 3,14 m2.
The body of the boat – wooden, with a frame consisting of three frames, the keel, a pair Besov and four stringers.
The frames are assembled from pine slats 25×60 mm section vpoldereva, and on the frame 1, the joints of the rails on both sides are reinforced by the brackets out of plywood with a thickness of 3-4 mm, and for frames 2 and 3 by a continuous lining of the same plywood.
Assembly of the frames is made on a sheet of chipboard with glued on it plazom sheet of drawing paper with the picture of the contours of atasamentul design, over which is stretched the plastic wrap to prevent gluing the wood parts to the paper. After mutual adjustment of all parts (brackets and zalivok) assembled frames with epoxy glue and screws-self-tapping screws. The fastener is preferably used with a protective coating – kadmirovannye or galvanized.
The frame case is going on a level floor – for example, on a sheet of chipboard of a suitable size. For a start it draws the trace of the plane of symmetry of the hull and the location of the frames, then use wooden braces and screws on a makeshift slipway the keel up part of the set frames. 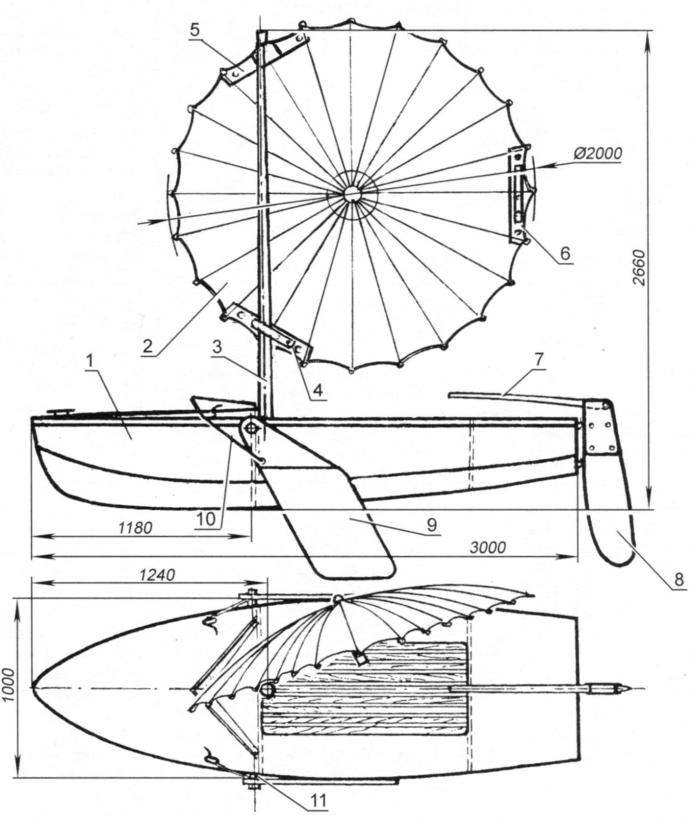 Walking umbrella-bot:
1 – body umbrella-bot; 2 – sail-umbrella (beach umbrella d2 m); 3 – mast (pine, bar 50×50), 4,6 – lower attachment points of the umbrella-sail; 5 – upper attachment point of the umbrella-sail; 7 – tiller steering system (beech or oak, block 30×30); 8 – steering pen (plywood s12); 9 – additional parts (plywood sl2); 10 – start-stop; 11 – cross member for mounting sverzov (aluminum, pipe d22x2)
First with epoxy glue and screws self-tapping screws fixed keel beams, consisting of two parts – the actual bar and stem. The stringers and the beams can best be customized and temporarily locking the frames in pairs – first upper, then lower and at the end of the beams. Final connection to the frames with glue and screws are also made in pairs, a thorough inspection of the symmetry of the frame at the completion of each operation.
After curing of the adhesive frame is aligned with a plane, rasp and sandpaper glued to plywood strips. Plating from the umbrella-bot and plywood. It should be noted that a standard sheet of plywood has a length substantially less than three meters, so you need to dock billet “mustache” on the length of about 50 – 60 mm with fixing them all the same epoxy glue. To avoid errors in the calculation of the shape of parts of the skin, should make them a cardboard pattern and only after a series of fits and fitting the outlines of the shell elements can be transferred to the plywood workpiece.
Sheathing the frame should be pairs of symmetric parts – both right and left sides, then right and left bottom leaves are constantly monitoring the symmetry of the body. Mount plywood pieces are epoxy glue and self-tapping screws.
At the top of the frame 1 with screws and epoxy putty fixed dural tube outer diameter of 22mm, intended for fastening on her side sverzov.
Deck umbrella-bot – of 4-mm plywood to the frame member it is secured with epoxy glue and self-tapping screws.
After the completion of the housing Assembly, the joints between the panels are filled with epoxy filler, then after curing, vyshkurivaetsya the entire outer surface. Inside the joints of the sheathing with the framing members are filled with epoxy filler, after which the body is covered with two or three coats of varnish parquet and painted with enamel.
In the transom Board at the level of the bottom glue two bottle from plastic bottles – using them will merge within the body water. The lower part of the cockpit was covered two floorboards (duckboards) grid of wooden laths with cross-section 20×80 mm, covered with two layers of varnish parquet.
Additional parts and steering feather is cut from plywood 12 mm thick. the Profile of all of them symmetrical – rounded in front and pointed behind. After processing and finishing viskazivaniya plywood parts are covered with several layers of varnish parquet, and then, after polishing, bright enamel.
The axis of rotation svarca is a steel stud with thread M14 on one of its ends; additional parts fixed on it between the two nuts and two washers. Fixing sverzov on the yacht is made by rubber cord shock absorber with a pair of hooks at its ends. To move additional parts does not pop up, they are attracted by a pair of Vertov installed on the deck ducks. 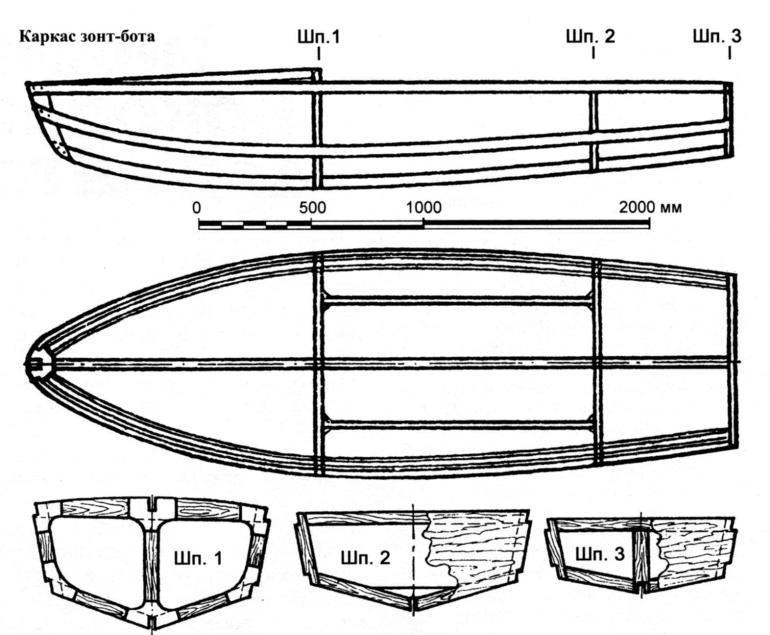 The frame of the umbrella-bot
Steering pen is mounted on the transom of the Dinghy using the simplest of loops, each of them consists of a bracket, bent from 6 mm steel rod in the form of the letter “G,” and the mate of the same rod, resembling a ballpoint pin with a ring. Hinges are fixed with epoxy glue in the holes in the transom and in the front part of the pen. Rumple, of oak or beech slats, with the tail feather it is connected with a hinge.
Mast umbrella-bot – swivel, pine, its length is 2600 mm, the diameter at the top is 30 mm – 50 mm. If the strength of the mast is insufficient, it makes sense to paste over it with two layers of fiberglass using epoxy resin. The supports of the mast on the umbrella-bot are the steps (stainless steel beaker with an internal diameter of 50 mm), mounted on the tail housing and yoke from a steel strip, fixed to the frame 1. Accordingly, in the lower part of the mast mounted spurs – a metal or plastic cap with an outside diameter of 48 mm, and in the area of the upper support clamp mast – steel belt with a width of about 50 mm. 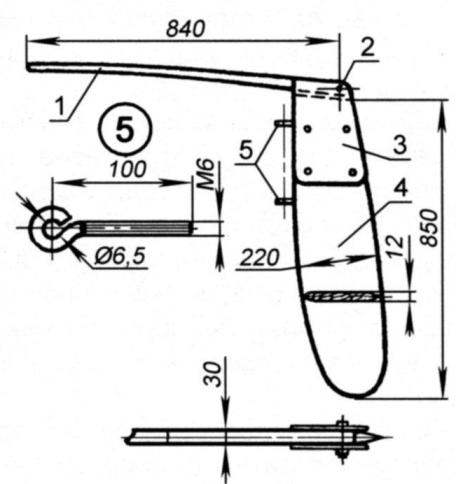 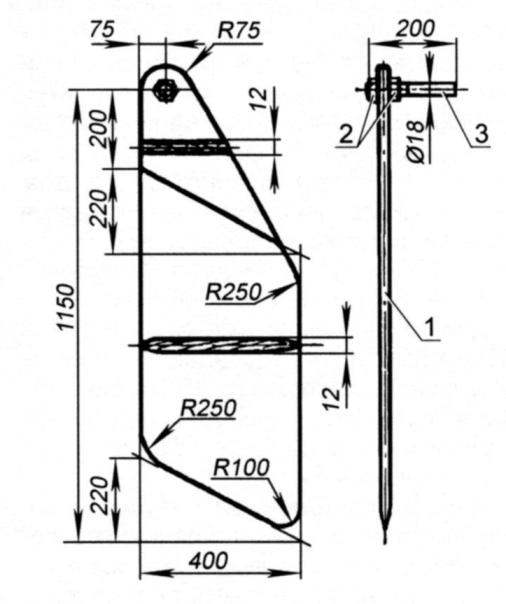 Side swiercz Assembly:
1 – swiercz (plywood s 12); 2 – nut M14; 3-svarca (aluminum, pipe 18×2)
As mentioned above, as the sails on the boat used a beach umbrella with a diameter of 2 m, which can be purchased at a sports store where camping equipment is sold, or ordered through the Internet.
Long leg-stand, the much needed beach umbrella, a sail is not required – it should be cut flush with the end moving the rack sleeve at the maximum opening of the umbrella.
The umbrella-sail has three knots attaching it to the mast. The top (hinge) of the host on which it is suspended to the mast, allows you to change the position of the umbrella-sail relative to the mast when changing tack. It consists of a pair of dural plates, mounted on two (or three) spokes of the umbrella with a few M5 screws with nuts, and U-shaped loop of steel rod of 6 mm in diameter, whose ends are pre-cut M6 thread. On the mast well secured counterpart of the node – hook is bent in the form of the letter G, on the “leg” of which is threaded M6. Each of the bottom nodes also consists of a pair of dural plates and clamps that hold the sunshade on the mast when changing tack. It should be noted that the lower nodes are used for the attachment thereto of the sheet – linen or synthetic rope with a diameter of about 12 mm.
When setting up the umbrella-bot the main thing-to combine the center of the sail (CPU) with the center of lateral resistance (MKS) unit. Note that the CPU of the dome of the umbrella is located at a distance of about 0.5 m from the leading edge. Well, CBS housing will need to be determined experimentally. This sailboat is arming surcame and tail feather and down to the water; around svarca to the side of the hull snapped Lin. When pulling the Lin perpendicular to the median plane of the boat, and it will move parallel to the longitudinal axis, the location of the binding line and is the center of lateral resistance. However, most likely, in tension Lin the housing starts to turn, and in this case, the binding line will have to shift and repeat the experiment as long as the body will not begin to move parallel to the longitudinal axis.
If it turns out that the CPU and the CBS of the case do not match, readjust the position of CBS can reject sverzov forward or backward. To change the position of the CPU deflection of the mast.
A well-tuned sailing ship must have a small tendency to operate (go luff) that helps with a sharp wind to transfer the boat to head to wind position – nose to the wind.
I. MNEVNIKI