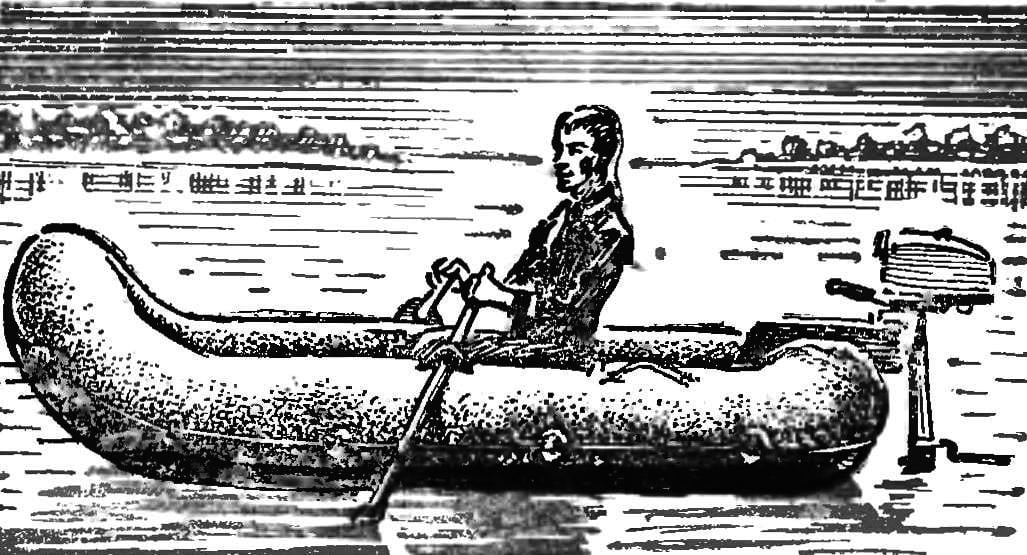 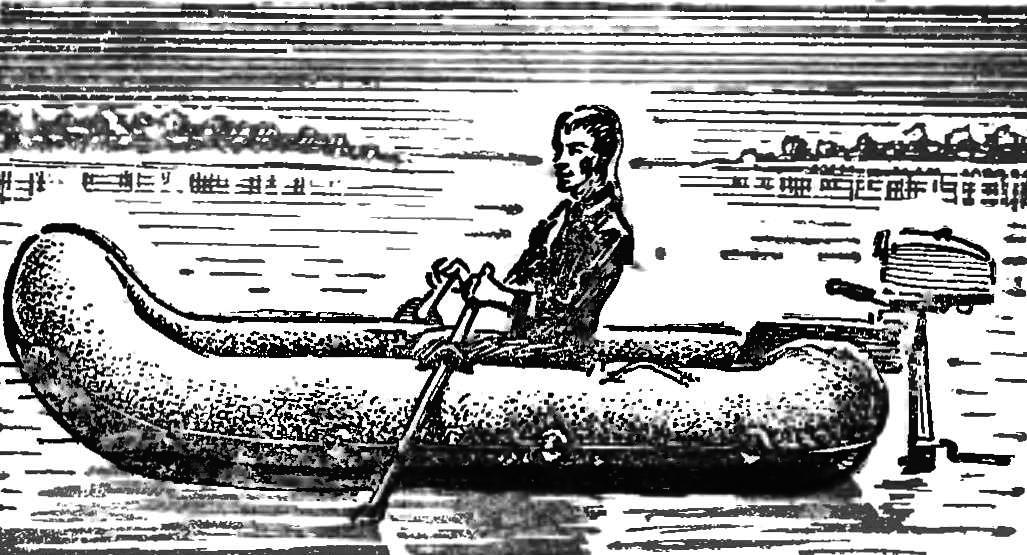 Tourists, fishermen, hunters and fans of water recreation dream to have a comfortable, not heavy, transportable boat. For this purpose, in my opinion, the most suitable rubber inflatable boat.
I bought this boat “Last-5” has a weight of about 18 kg, and picks up three. In calm weather and in light winds she glides across the water. But its lack — the big sail. Should the wind increase to only 2-3 points, and sail this boat with oars is almost impossible. Not to be a toy weatherproof, can be mounted on the boat, an easy outboard motor.
Figure 1 boat “Last-5” is shown with an outboard motor “salute”. The speed of her movements at medium engine speeds of the order of 8-12 km/h.
In figures 2-4, the fixture for mounting the motor to the boat. It consists of folding a fish, covered with canvas (tarpaulin), two brackets of duralumin angles, transom boards, rubber lining with tarpaulin and struts.
DESIGN
FOLDABLE FISH (Fig. 2) made of spruce boards with a thickness of 15 mm. the Outer edge has an oval shape. Longitudinal and transverse Board are fastened with screws with countersunk head. Big fish on line A—B is folded inward (as shown by the arrows). Hinges are three metal hinges. 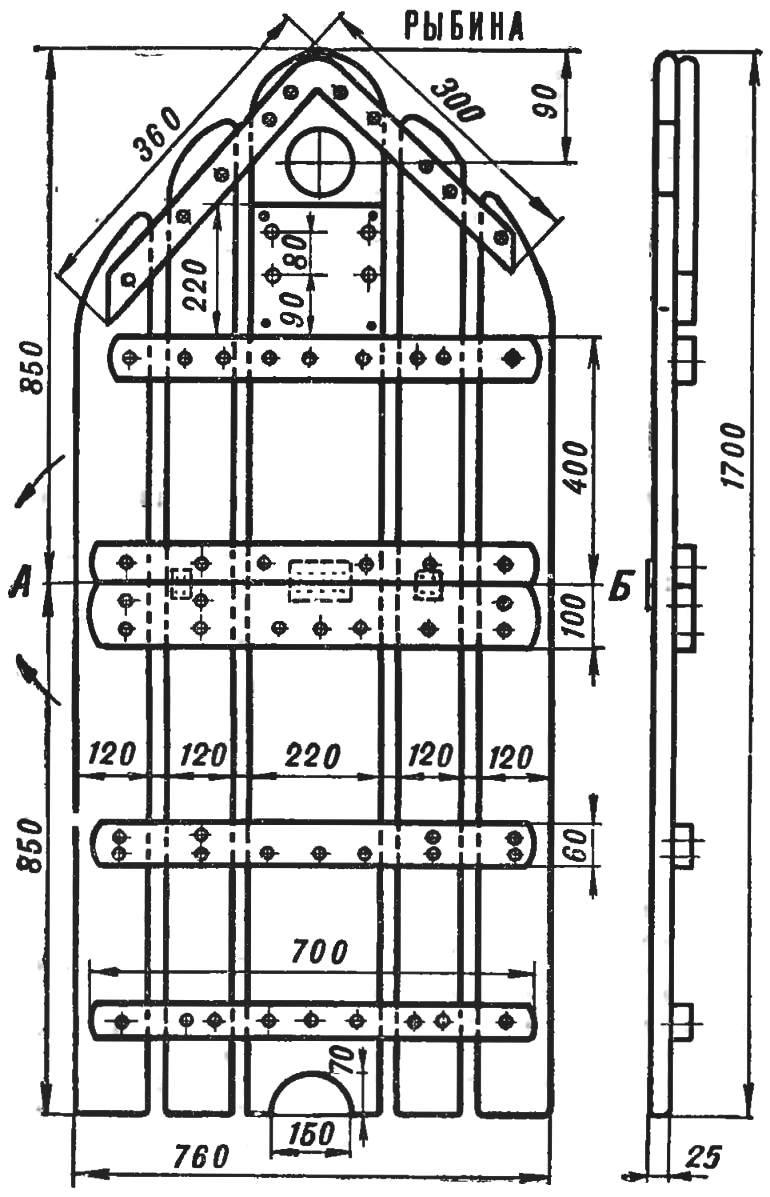 Fig. 3. Fish and bracket Assembly:
1-2 — parts of the fish 3 — tarp 4 — bracket
Pad for brackets made of spruce boards 220Х220Х20 mm, which is attached at the corners and in the middle of the screws. From the bottom part planted dural plate 220Х220Х1 mm. In the plate, middle Board fish and dural plate are drilled four 6 mm holes 0, through which bolts for mounting the brackets. After production of the fish is painted with oil paint, and after drying is covered with a tarpaulin (from the bottom) to protect the hull from damage.
Put fish in the boat, and after pumping the boat acquires greater rigidity, which allows even standing to throw the spinning.
BRACKET (Fig. 4) is made of duralumin angles 30x30x3 mm. as they are bent bad, but welding them is difficult, then the manufacturer should make angles not very sharp and to seal dural gussets thickness 2.5—3 mm. They are attached to the corners of the studs with oval head.
The fish brackets are attached with four bolts, length 45 mm. After Assembly, the brackets primed and painted with waterproof enamel.
The TRANSOM is made of dry spruce with a thickness of 40 mm.
To the outer part privernuty two screws of the steel lining of the same size with a thickness of 1 mm, painted with oil paint. The transom is attached to the brackets with four bolts 50X6 mm. 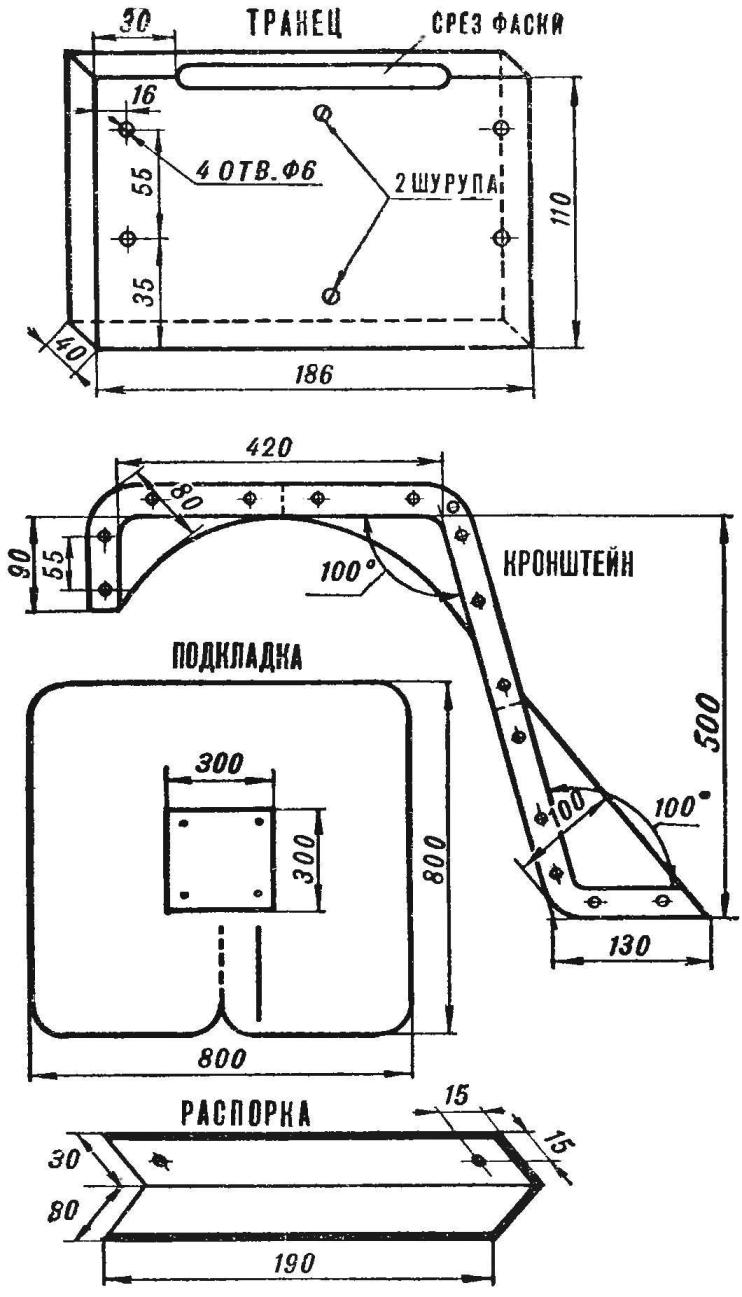 Fig. 4.
Rubber lining with tarpaulin shown in figure 4. It is made of microporous rubber 300Х300Х20 mm and is sewn in the corners of the tarp. It needs to be put under the bracket on the cylinder of the boat. It will protect the boat from pretyranny corners in heavy seas and protect the rubber body from falling gasoline or rollover of the motor.
The SPACER is made of duralumin angle 30X30X3 mm, length 190 mm. It is attached to the bracket in a horizontal part with two bolts 15H5 mm.
All the device is easy to manufacture, easy to install on the boat and ensures a secure fit outboard motor.
In conclusion, I want to say that after the installation of outboard motor inflatable boat turns into a full vehicle and the possibility of its use are expanding.
K. ANISIMOV