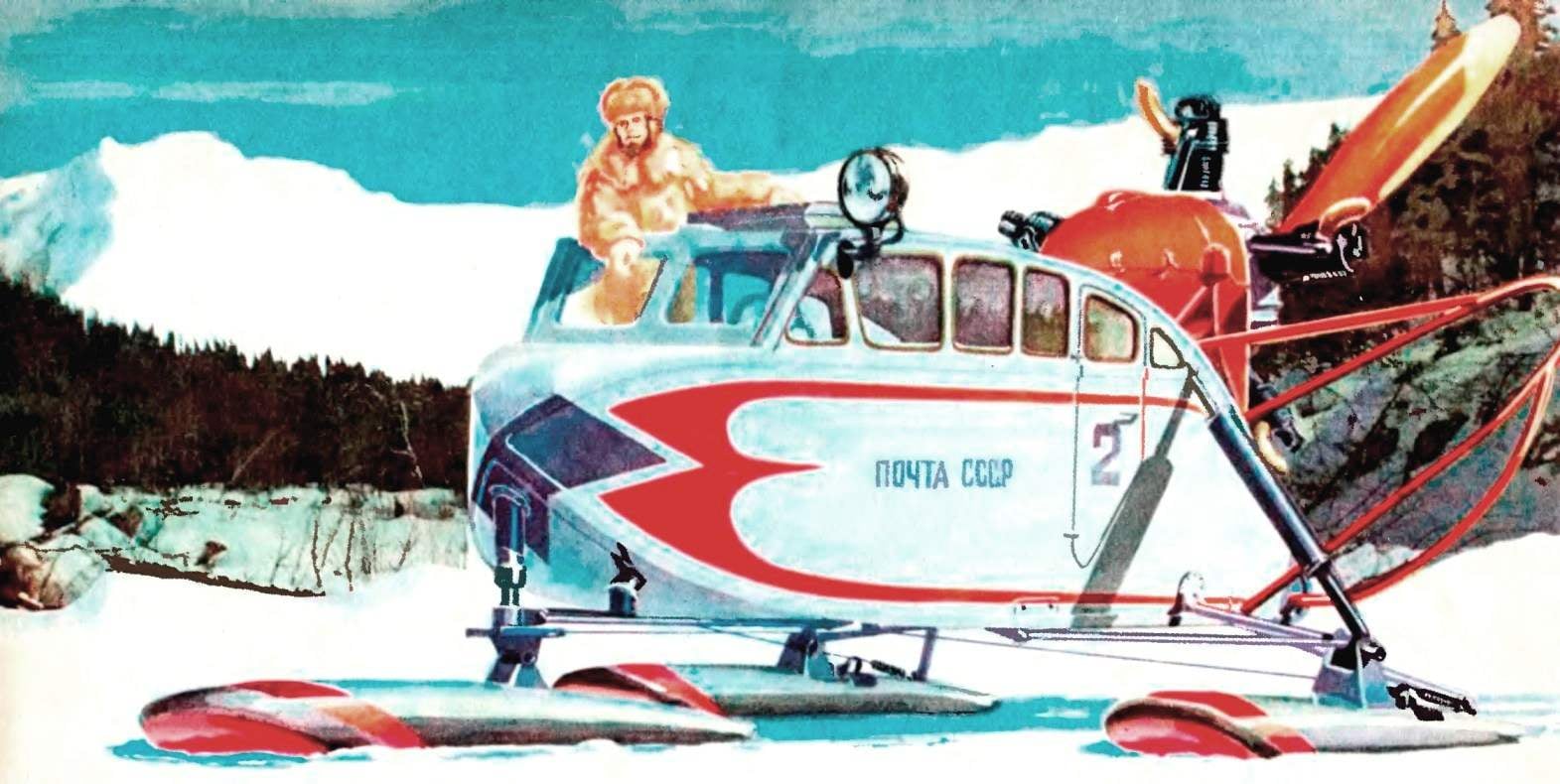 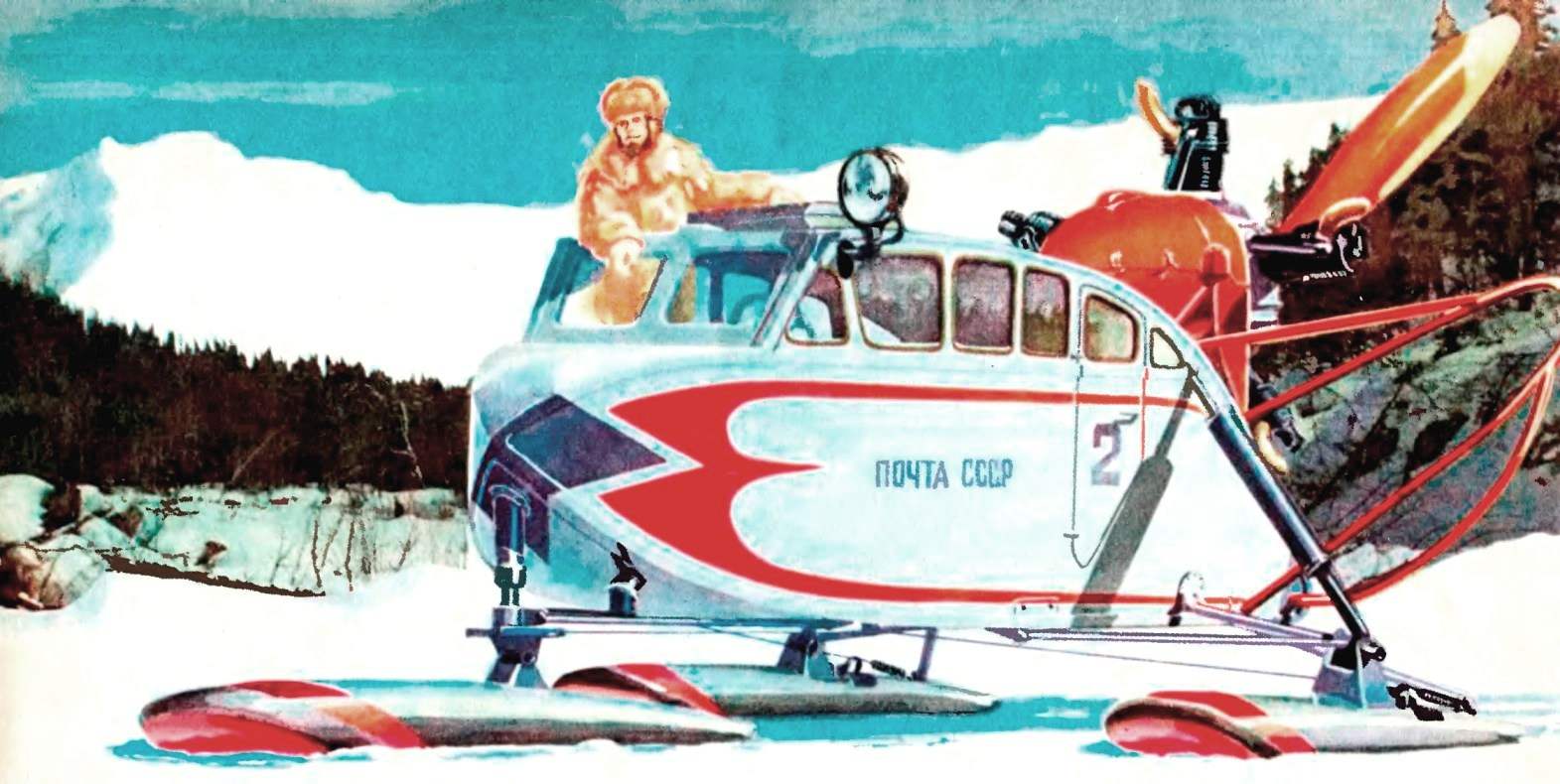 Copenhagen, 1934. International aviation exhibition. Among the machines for the development of the North paid particular attention to the snowmobiles of OSG-6. Comfortable and shared, they differed from the other designs of technology, a good layout. Powerful aircraft engine M-11 allowed them to reach the speed of 80 km/h.
…The way of the creation of OSG-6 was short. In 1932 at the initiative of the society “Avtodor” we section at the Institute of Civil air fleet was reorganized into the Department experienced the construction of gliders and snowmobiles of OSG. During the first year under the leadership of chief designer M. M. Andreyev has designed several types of machines. Next, 1933, the snowmobiles of OSG-2 participated in the Arctic expedition of the icebreaker “Krasin”. They transported food, equipment and people to the wintering grounds. Another car, OSG-4, quick and nimble, with a motorcycle engine, 18 HP, was used for reconnaissance missions.
Six of OSG-6 (later NKL-6) was the third car of the OSG.
It just so happens that fate was not slow to test this design, and in the most severe conditions — snowmobile participated in the campaign to rescue Chelyuskinites. The car was “used” to severe winters, abundant snowfall, and the people of the North got used to it, linking its appearance with the latest news, mail from the mainland. Upgraded several of OSG-6 for a long time worked in Chukotka in the area Wellen, serviced airfields.
In 1939 the war with the white Finns in the sled were patrolled individual sectors of the front, carried out the landing and combat operations. Some machines in this regard was fitted with a turret machine guns. Them to the advanced position of delivery of ammunition and food, evacuation of wounded.

The SNOWMOBILES of OSG-6 — military and sanitary options.
The snowmobiles of OSG-6 found application of n during the Great Patriotic war, especially in the snowy and cold winter of 1941/42. Assigned to the headquarters troops, they liaised with the combat units of the front, was used in the exploration, interacted with skiers-paratroopers, suddenly appearing behind enemy lines.
Like a snowmobile?
Body streamlined shape. Back in the form of a separate Assembly is a rotor group. This creates good conditions for cooling of engine cylinders, and the repair provides easy access to the units.
At the front right of the machine is a hatch with a hinged folding lid for driver and mechanic. In the closed position, the cover is fixed by means of guide pins. She closed tension lock from inside the cab. At the hatch on the machine footrest and handrail. The door into the passenger compartment on the left side. It is hinged and with a spring lock. 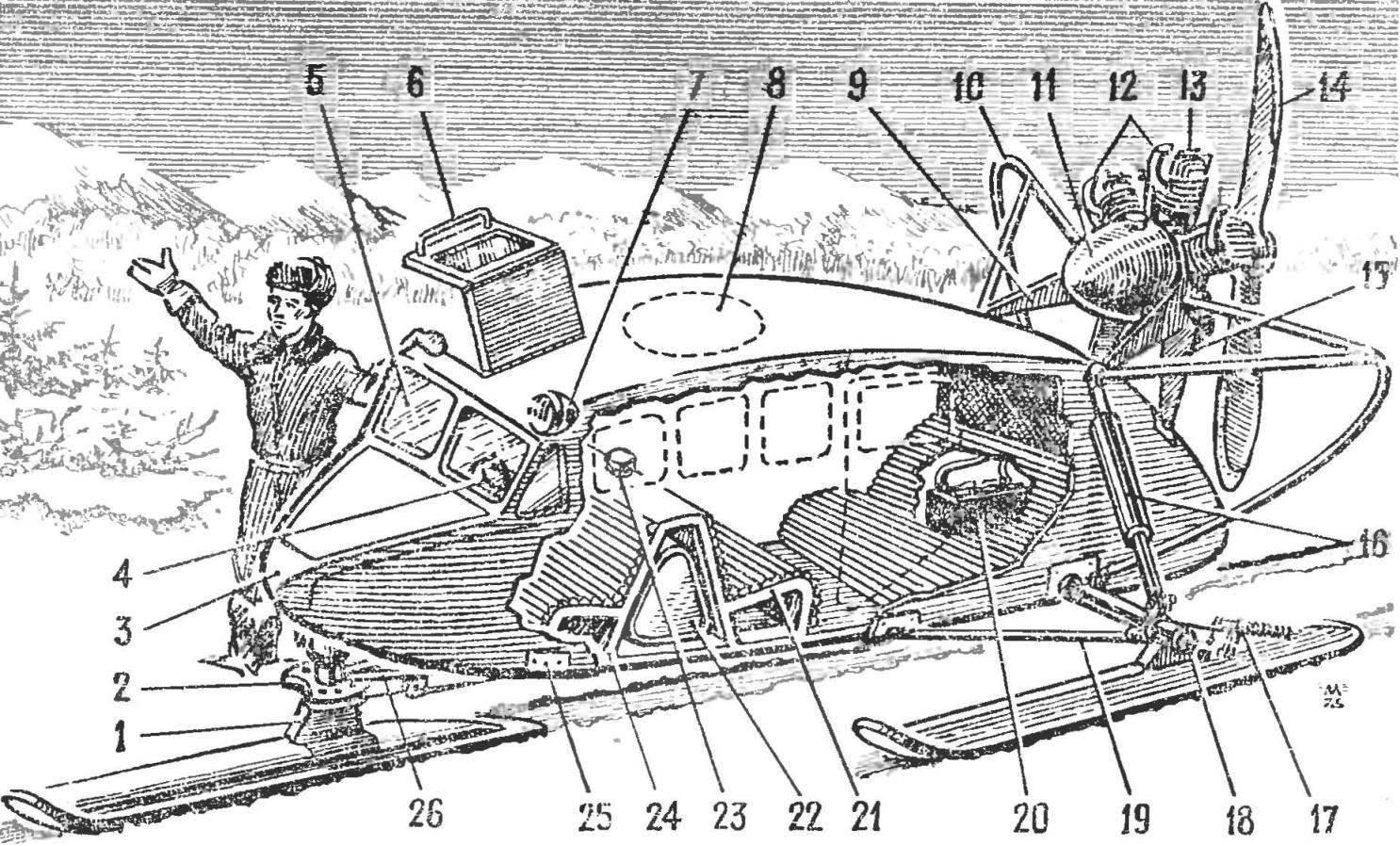 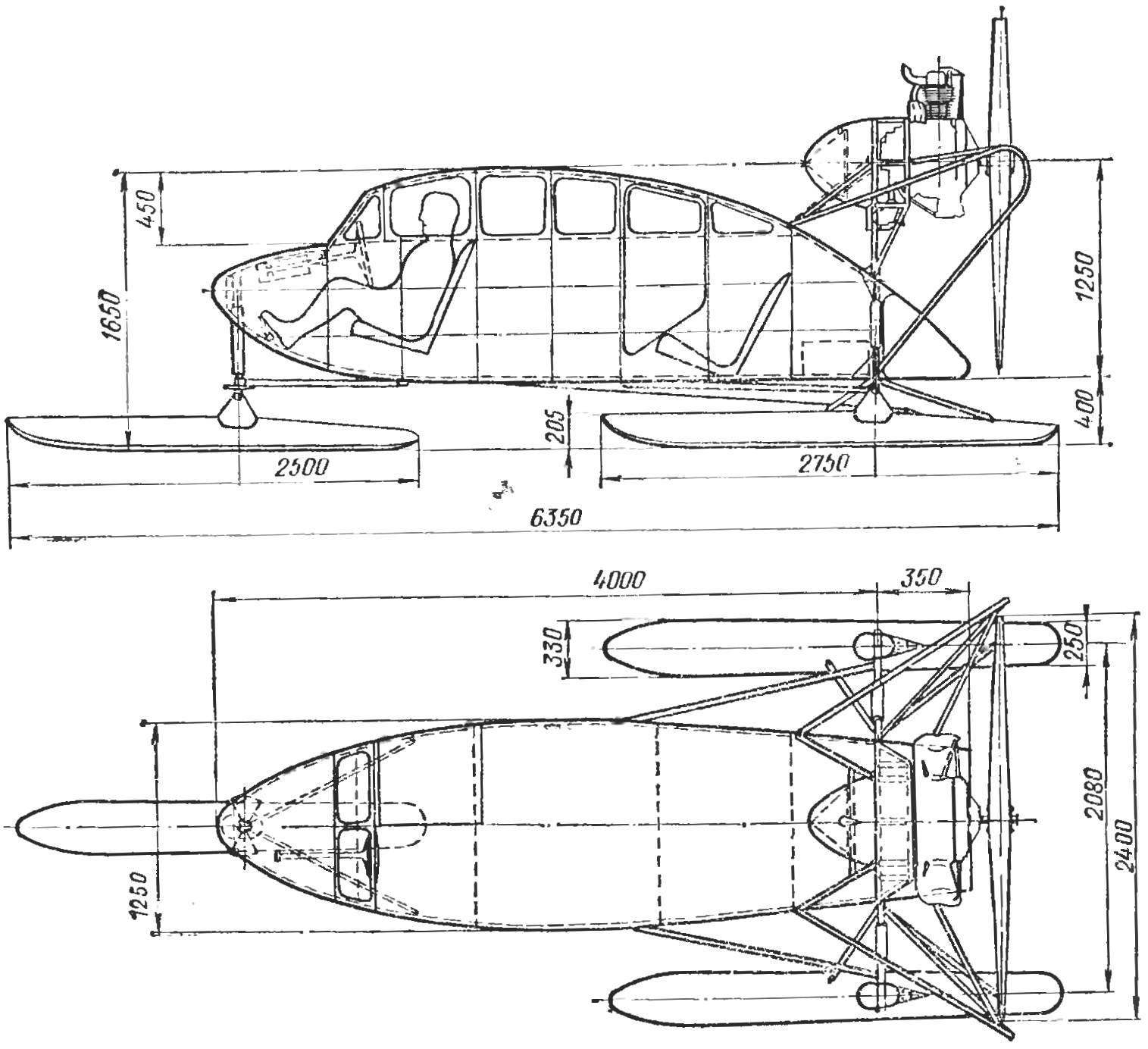 Fig. 2. Basic dimensions snowmobiles of OSG-6
Frame — wooden. Plating inside and outside is plywood. And clamping power units, suspension, chassis and engine setup — there is a reinforcing boss.
For greater rigidity of the enclosure in locations of cutouts for the driver’s hatch and machine gun turret reinforced edging. Outside painted and wooden slats.
Inside the cabin are covered with leatherette. Glass cabin (the passenger version) are closed by silk curtains. In the cabin, three double seat with soft leatherette cushions for six persons, including the driver. Gas tank placed between the backs, from the top they are connected by a wooden panel that has a hole for the withdrawal of the neck of the tank.
Unilateral control wiring, cable passes through the casing through the rollers.
Front ski swivel. Soft steering cable wound on a drum mounted on the tube of the steering column. The drum has a groove for the cable and the clamping roller to prevent slippage. From the drum the wire rope through the roller system suitable to the roller end of the rope attached to the rotary sector of the front speakers.
The snowmobile skis were installed in two types: wood frame, cigar-shaped and welded steel, banded area and having a concave upper lining. Both types of skis — from metallic steel or dural undercarriage soles, on which the center was established undercuts guides. 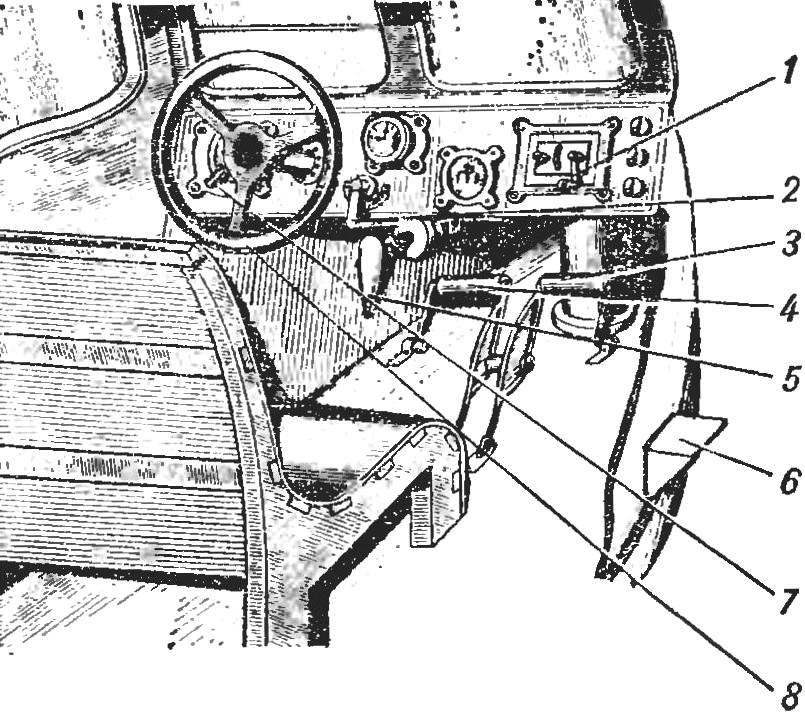 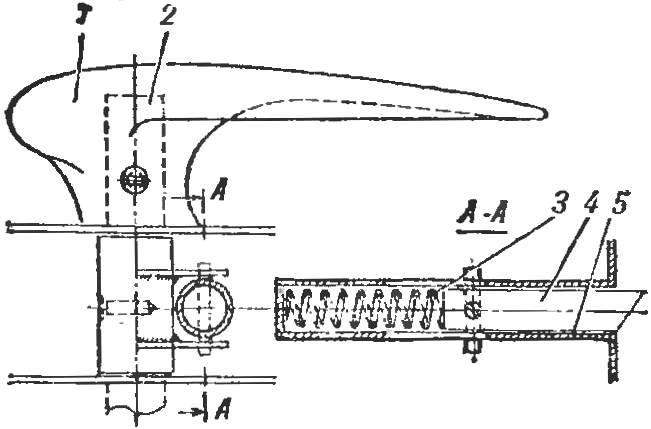 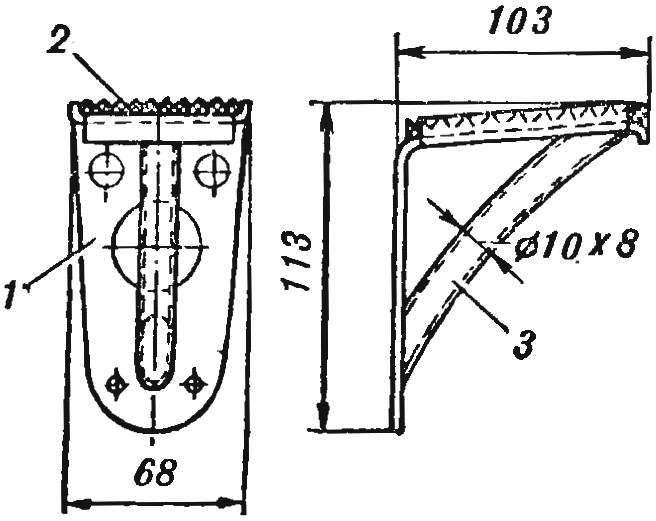 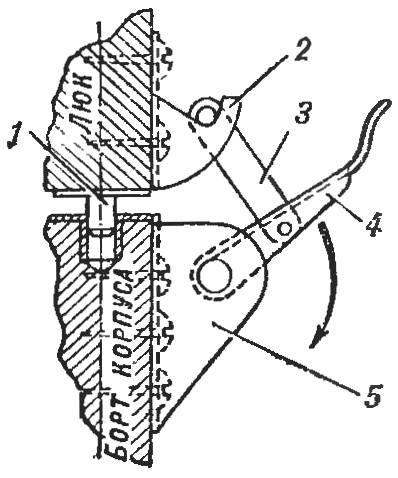 Fig. 6. Castle hinged hatch:
1 — pin, 2 — bracket 3 — clip 4 — tension and lock 5 — axis bracket
On the front of the ski undercut somewhat displaced relative to the suspension point of the ski to its tail. It is automatically returned to the ski when moving the sled to its original position along the longitudinal axis of the machine. Undercuts and prevent lateral slip of the machine, making it more stable on the move. Ski to mount them to the suspension of the snowmobile, put brackets — hog.
Rear suspension ski consisted of the right and left axle shafts attached to the power node on the body, and two unloading of the struts. One brace goes from the front of the site on the body to the lug on the washer that restricts the position of the drive pylon of the ski. The second brace — from the root axle to eyelet on the tail of the ski. To mitigate impacts when driving in hangers mounted spring strut.
As the brakes were used two steel pins inserted in the guide tubes, the linkage levers, which are mounted on the rear ski. Pressing on the brake pedal, the driver pins have advanced beyond running the sole of the ski.
The engine is mounted on a removable motor frame consisting of two curved tubes, the bottom part connected in two stable node And ending with ears. The ring formed in the front arc facing the motor, on the axis of the pipes are welded bushings for the mounting bolts of the engine.
On the transverse tube braces the motor frame is the oil tank. It has a fill tube with inlet and outlet fittings to connect the tubes coming from the oil pump of the engine, and the pipe heated (through it is fed warm air) from the engine. To protect the oil tank from hypothermia protected the hood a streamlined shape.
The exhaust system of the engine for the upper three cylinders consists of the individual exhaust stubs which have oblique cut aimed at the air flow. This ensures that the suction of the exhaust gases and facilitates the filling of the cylinder fresh working mixture. Exhaust pipes of the two lower cylinders pass through the casing of the heated air inlet to the carburetor. Preheating improves the performance of the engine during severe frosts, prevents icing of the carb. From casing heated warm air is supplied via an insulated tube to heat the oil. 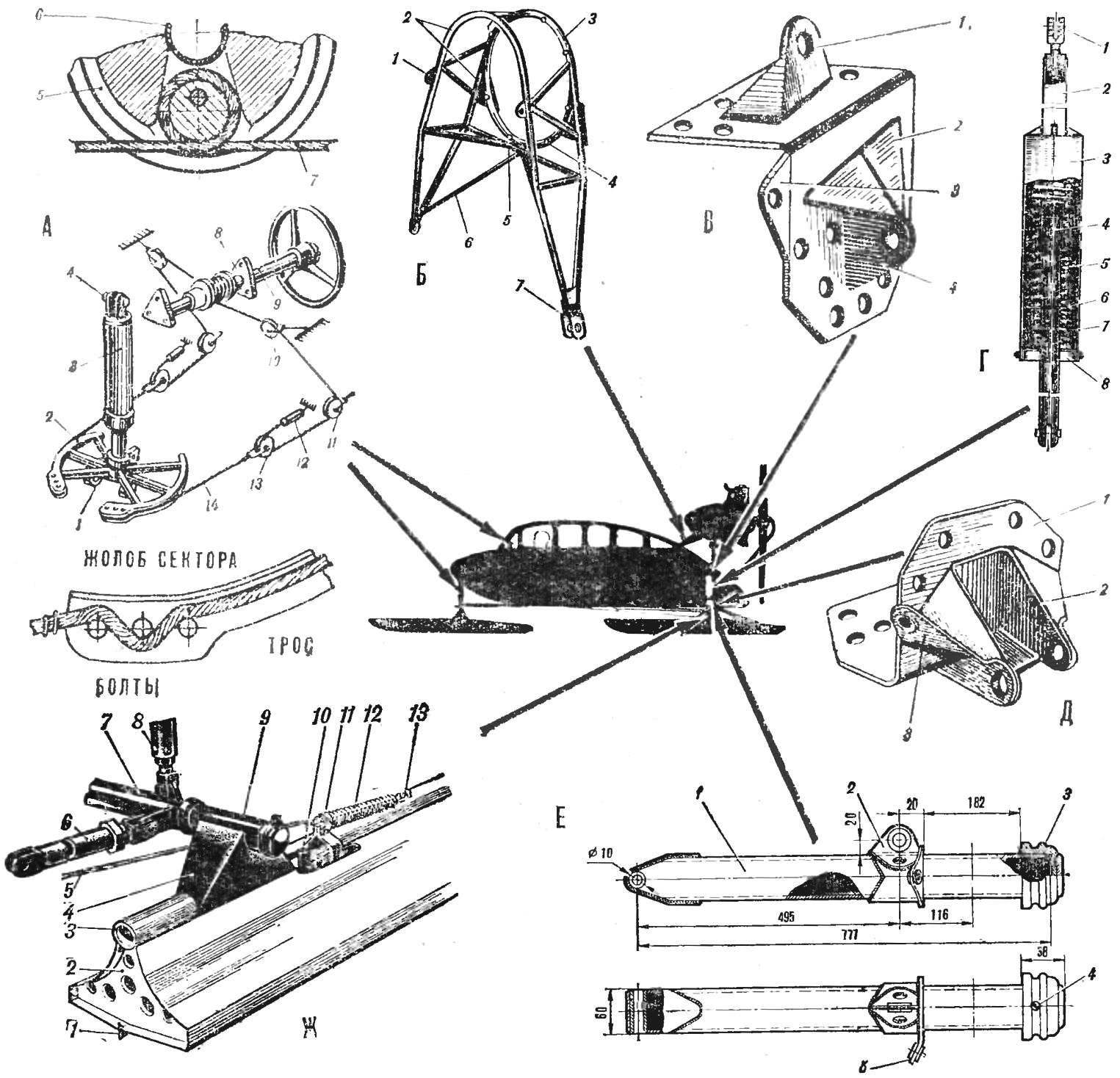 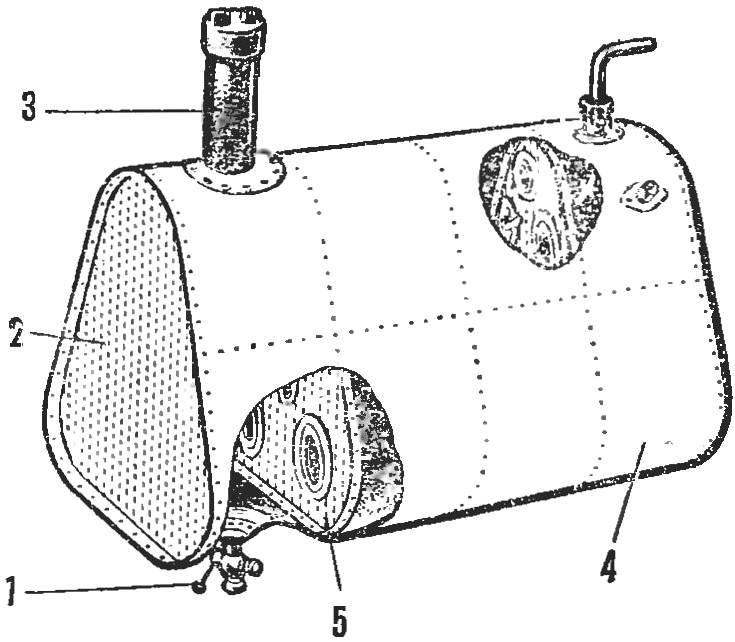