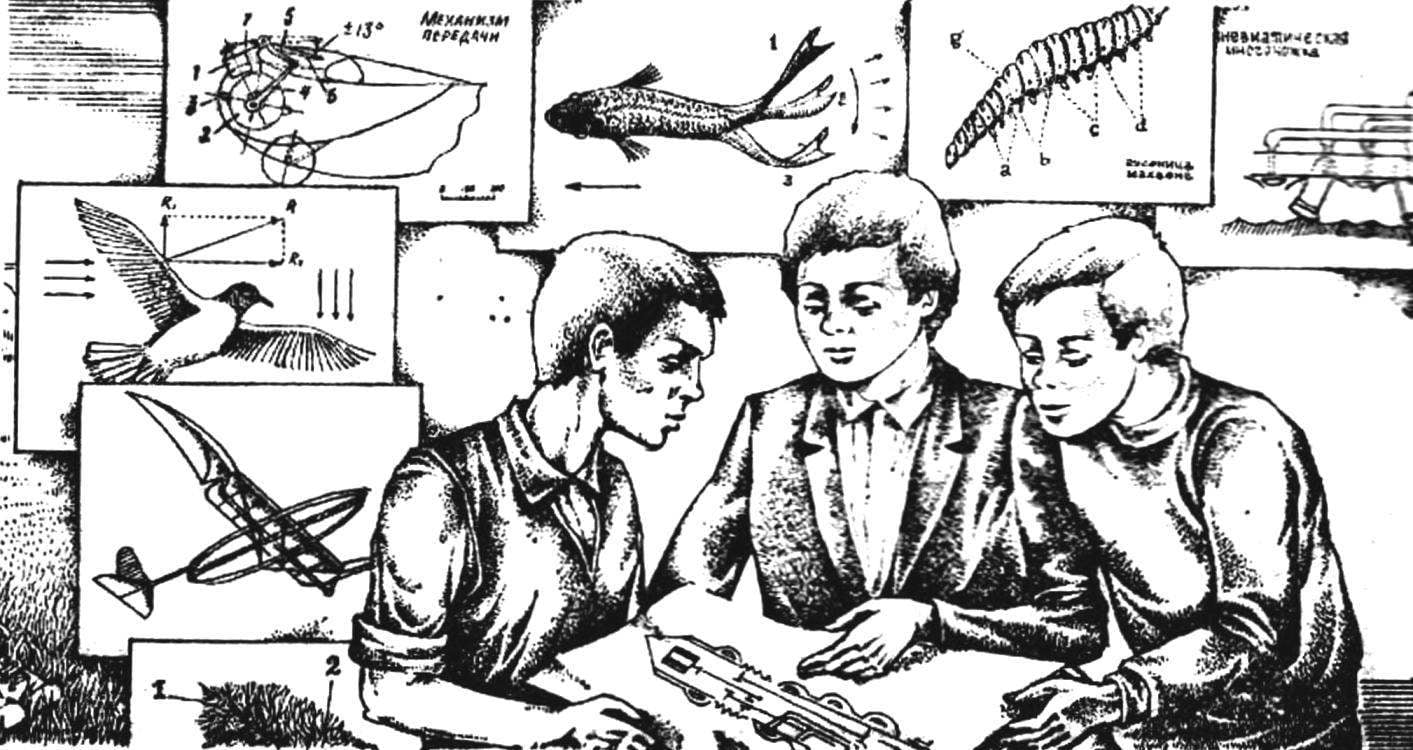 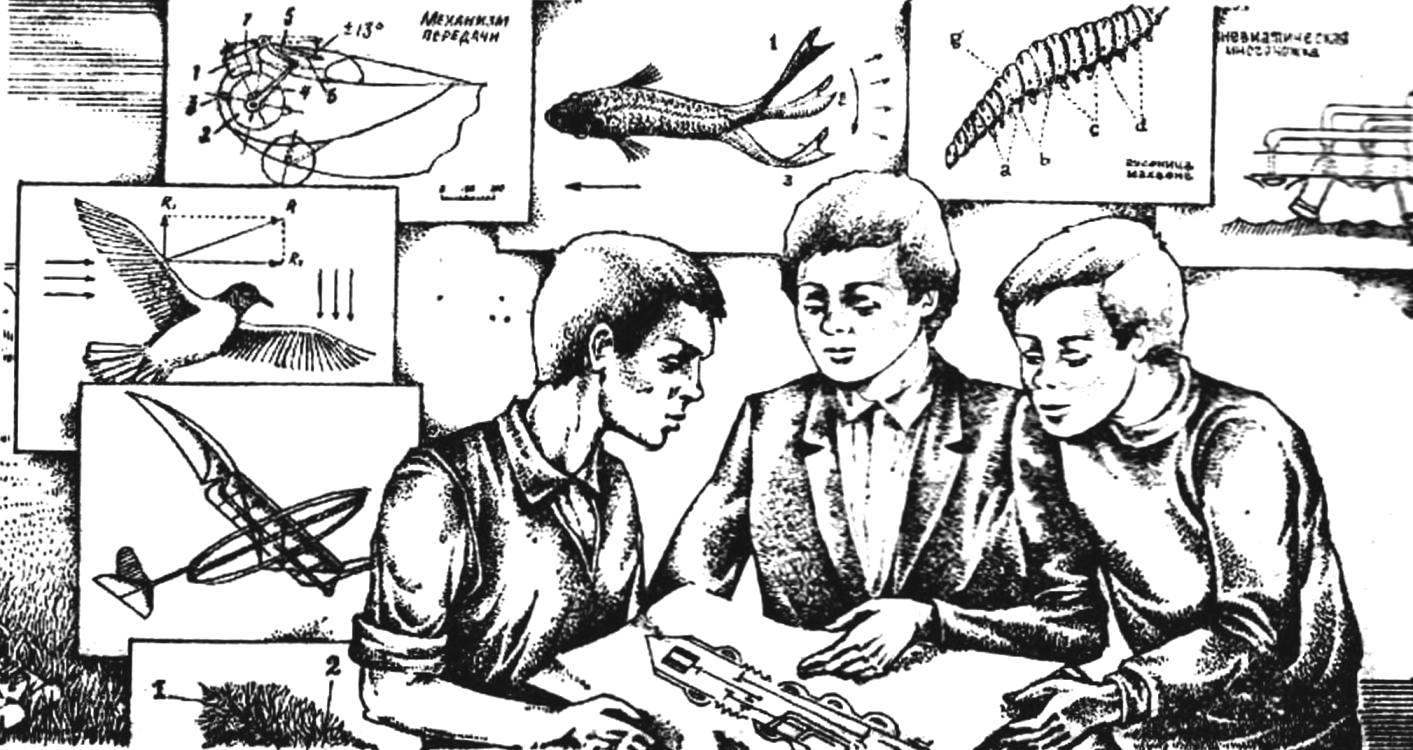 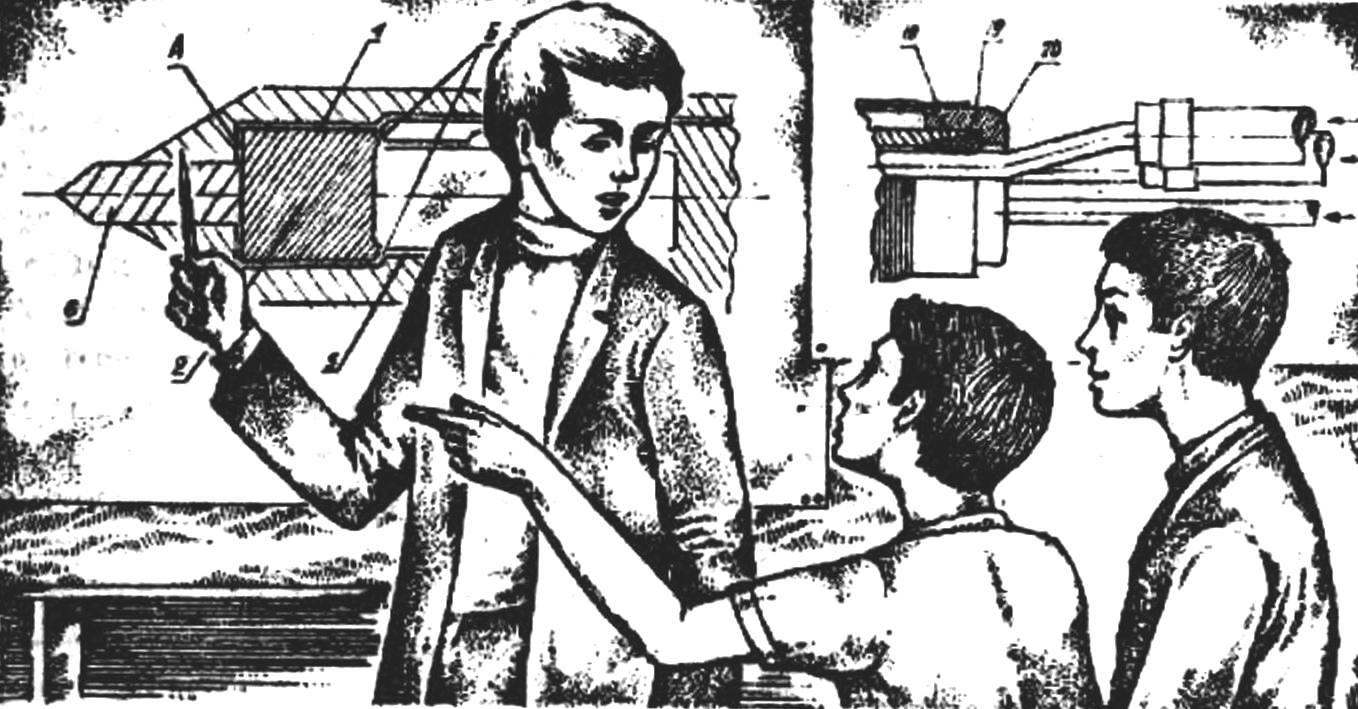 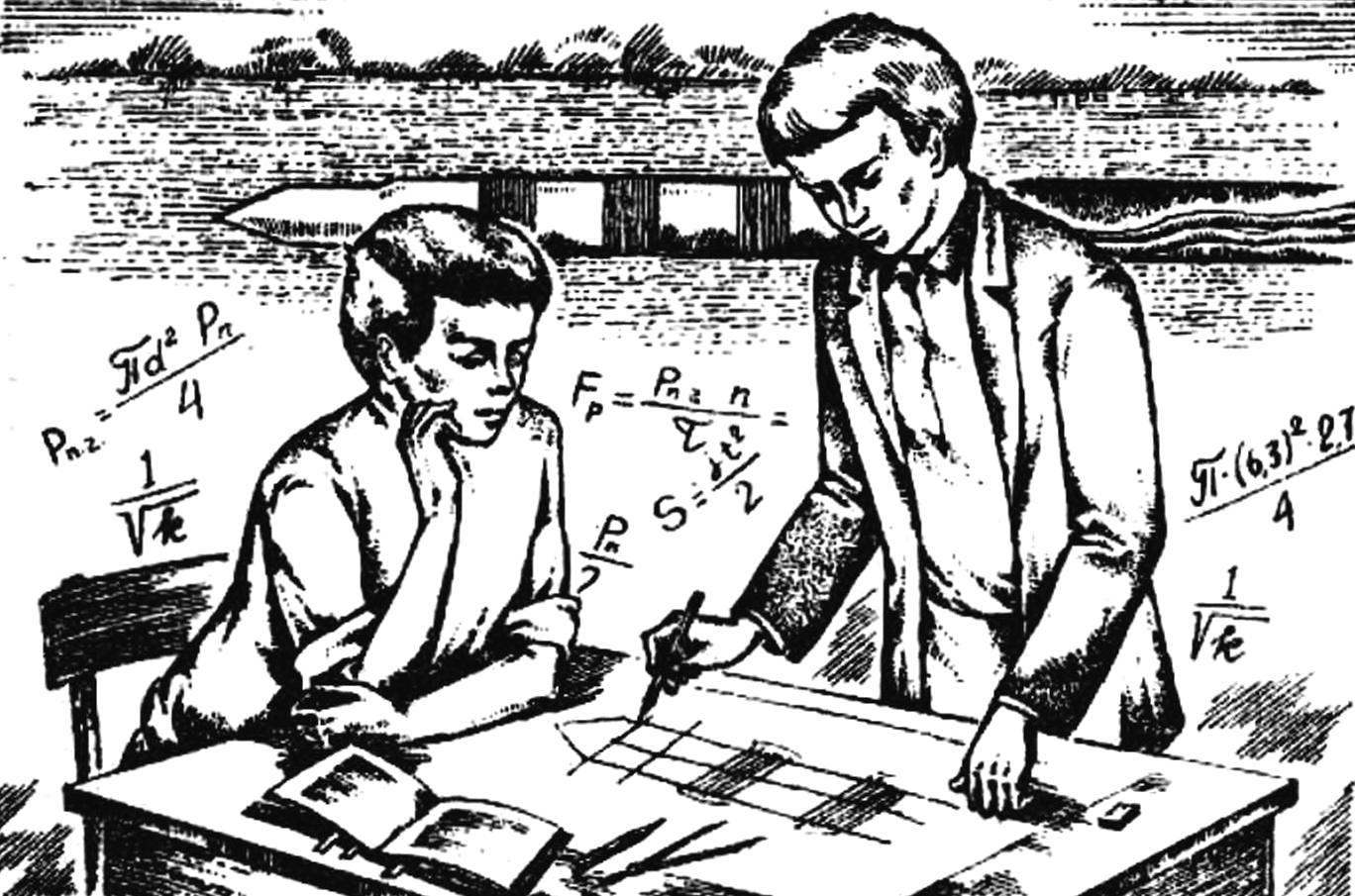 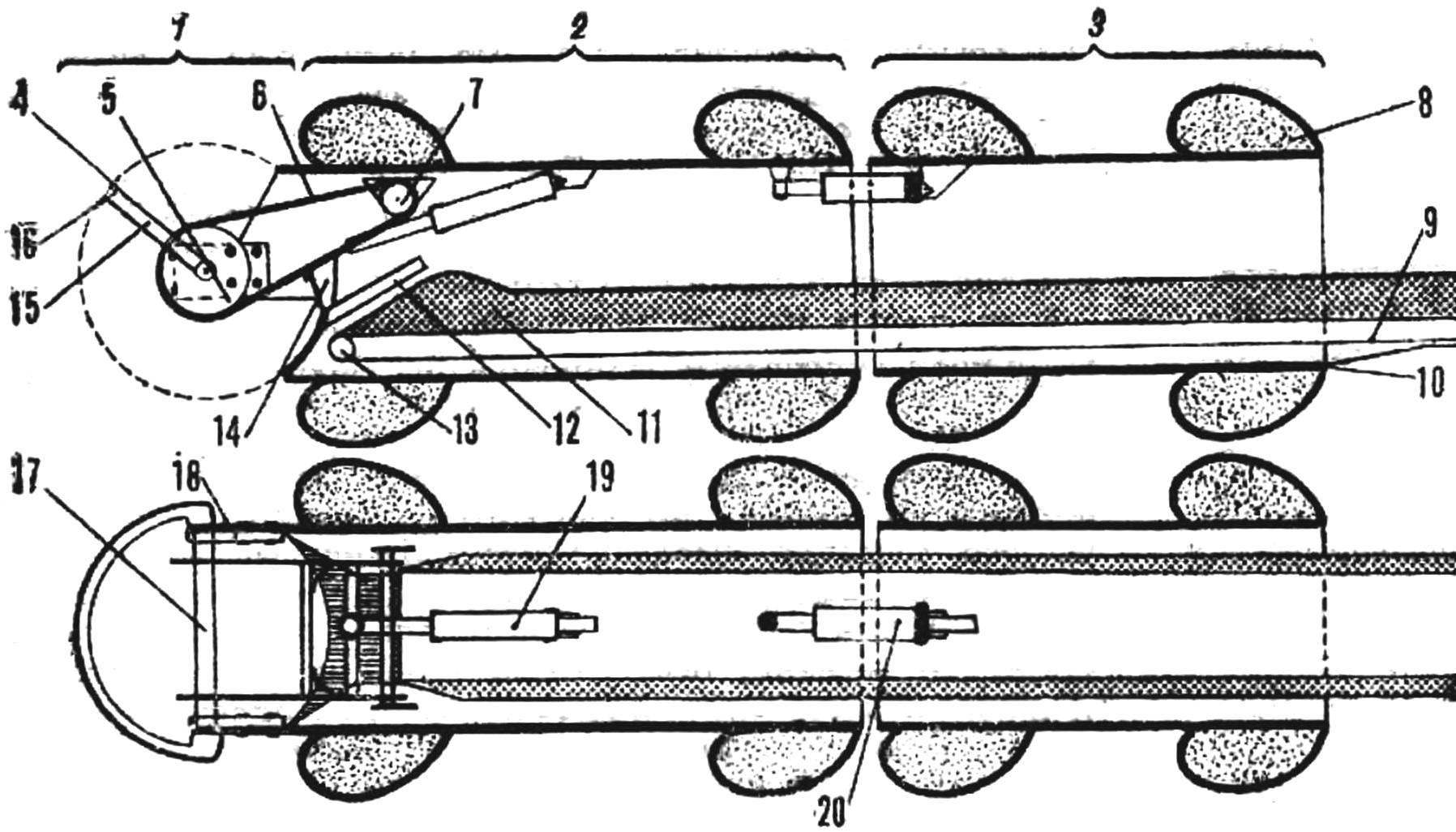 The scheme of the real device for tunnel lining:
1 — actuator, 2 first section 3 second section 4 — teeth, 5 — star, 6 — circuit, 7 — gear, 8 — elastic shell, 9—conveyor, 10—drive from the hydraulic cylinders of small capacity for conveyor (not visible), 11 — conveyor 12 — inclined plane, 13 — roller, 14 is a hinged plate 15 — the case of the knife, 16—, 17 — axle, 18 — bearing, 19 — cylinder of the cutting mechanism, 20 — main undercarriage cylinder.
The ultimate goal of such a search for all generations of students in the example were one and the same — unusual machine, a mechanical “worm”, an invention that can bring tangible benefits to the national economy of the country. Solved socially significant task, and around it was built the whole long-term work of the team of teenagers.
Of course, the relative completeness of the work required for the members here. Lubarsky has built a program of search, experimentation, and design so that before leaving school every young technician could see the results of their labor. Objects of design and construction in these cases were either stage model of a mechanical “worm”, or their individual components. The atmosphere of creative search, continuously supported in a circle by his head, stimulated the interest of students to the overall theme didn’t reduce the creative potential of the designers.
The contribution of each member of the society to the common Fund of ideas, projects and experiments is shown to the whole school, the most distinguished of the young technology are encouraged, which creates additional moral incentives for students involved in a circle of “Young mechanic”.
In the atmosphere of the succession of ideas of young technicians of several generations of the next replenishment mug — eighth grade, just come to school, decided to continue the work begun by their predecessors.
6. THE CREATION OF A PROTOTYPE
Now the head of the circle in front of the young designers were set another task: on the basis of the already achieved theoretical and practical results to create a machine suitable for underground work — piping gas and water lines, underground communication lines in hard to reach places (under houses, highways, etc.). Not excluded thus the possible use of a worm and an underground vehicle.
The club decided to design and build a machine that can lay an underground tunnel with a diameter of about 500 mm, to remove the generated ground — transport it to the surface.
Within one school year, the students completed the design and development of machines, consisting of several functional units. The following year, being the ninth-graders, they have already started the material embodiment of the project of the giant mechanical “worm”.
In the device — two sections, which are pivotally interconnected and serve as mounting frames (Fig. 4). In the head part of the first section is the working body, made (unlike the previous model, the head of a worm) in the form of a cutting mechanism. On the basis of carefully conducted by students of calculations it was shown that in such a large case diameter of the “worm” method of pushing an ordinary soil cone head is virtually unusable: it would take too much effort and, as a consequence, additional energy costs.
Active working body is a device, appearance and principle of action reminiscent of the massive jaw. It is pivotally mounted on the head portion of the machine and moves upward in an arc. Her teeth of solid steel welded to the corners with screws freely mounted relative to the housing of the knife. When the teeth are together, they can be replaced by disconnecting the pre-angles from the body of the knife, which is rigidly connected to the axle, rotating in bronze bearings. Axle mounted two sprocket converts the translational movement of the rod of the hydraulic cylinder through chains and additional gears in the oscillation of the entire knife.
When the movement of the head section knife cuts the soil and then, moving from top to bottom, raises it to the level of the inclined plane. It hinged plate, attached to the chains, delivers the earth onto the conveyor.
Young technicians found an original solution for the conveyor in the inoperative position it folds and takes up little space. This is achieved due to the fact that it is based on a wire frame with a rubber band. It turns out the original structure with curving edges.
In the working position the conveyor is translated by the first support rollers. While the paste special opens the sidewall and does not allow them to emerge; it turns out the groove, from which before the last roller where the conveyor closes, another insert removes the soil brought. The cylinders of small capacity, mounted on the housings sections or outside (on pillars), by using hooks on their stems and wire frame give the Transporter in motion.
Suspension of a worm is made on the basis of preliminary experiments conducted with models of elastic shells made from three car cameras. However, in the design of the machine the young technicians there was a proposal to protect the sheath from mechanical damage thin metal strips.
To the chassis is also the main undercarriage hydraulic cylinder moving section of the machine.
When the flow through the pipelines of the compressed air in the elastic shell of the latter under the action of excess pressure inflated and securely fix the section in the well. When such will be the rear section, the front with the working body with the main chassis of the hydraulic cylinder can apply forward — stroke are performed. Then is recorded for the front section, and moves back. Then the cycle repeats.
So a mechanical “worm” will work underground. 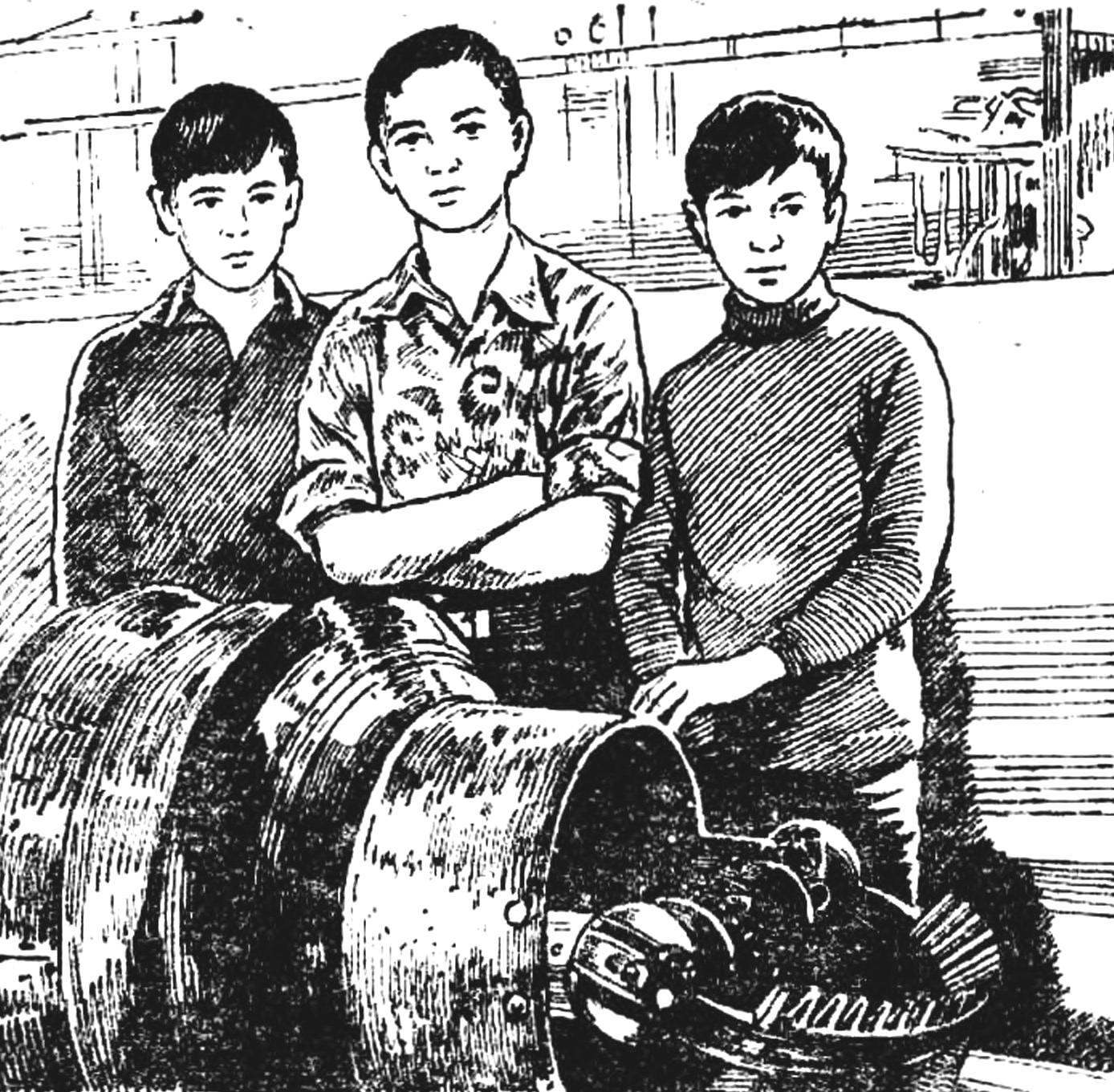 In a circle “Young mechanic” boarding school at KSU: a machine for tunneling and its designers.
Action hydraulic and pneumatic systems is provided by a compressor and oil pump. The cyclical action of elastic shells and cylinders is due to the software of the device located in the remote control.
Control over the direction of movement of a worm under the ground where young designers do using a narrow beam of light as well as for sinking of workings in the mines. To adjust the direction of the movement near the working body will be strengthened on the circumference of the three pneumonology by which the head part of the machine will be able to deviate in the desired direction upon command from the control >Board.
In conclusion, adding that the development of such an unusual machine, the project authors were able to consider issues of manufacturability of its manufacture in the school workshop. To this purpose it Provides for the application of a number of mechanisms already commercially available, mainly from agricultural machinery: that they were guided young designers, creating an entirely new car.
Of course, many of the details they have to do with their hands in the school machine shop. And those that will be unbearable for 8-9-graders, promised to produce an organisation — building trust.
In the first year of work on the “big worm” the boys in the school workshop manufactured housing sections and the head part of the machine with a working body (Fig. 5) and has embarked on the construction of the conveyor. Tests of this unusual device young technicians intend to carry out together with building trust. And if they show good results, the club will give their offspring this organization for implementation.
We followed the search and design students work from a choice of tasks for research to the creation of a prototype of the actual device. However, its construction is a creative process does not end. Experimental device must be tested in real conditions for which it was created. While it will surely be discovered some flaws and will need to be addressed, that is, to improve the design. Everything is a continuation of the process of technical creativity.
If the young techniques open the prospects for the introduction of the new devices (fixtures, apparatus, machines, etc.) in production, there is a need to design to technical documentation (drawings, diagrams, descriptions). This stage will be final for the complete process of technical creativity of schoolchildren. Often, however, school ends the invention at the stage of creation of experimental model of the device.
And sometimes the guys are building the prototype of the actual machine, based on mental modeling and conceptual sketches, bypassing the model experiments. This path leads to faster implementation of the idea into a real design, but the degree of confidence that the device will be operable, that the laws of nature, properties of materials, features of the scheme and its elements are considered quite true, in this case, obviously, will be less.
Depending on the specific conditions and opportunities technical circle any of these ways to solve the technical problem, the embodiment of in “metal” design ideas creativity in students is legitimate. But the most effective one which promotes maximum development of knowledge, creative search and creative work. It seems that we reviewed the system of organization of classes in the circle of A. J. lubarsky is one of the possible and, moreover, very effective options system group work with students on technique.