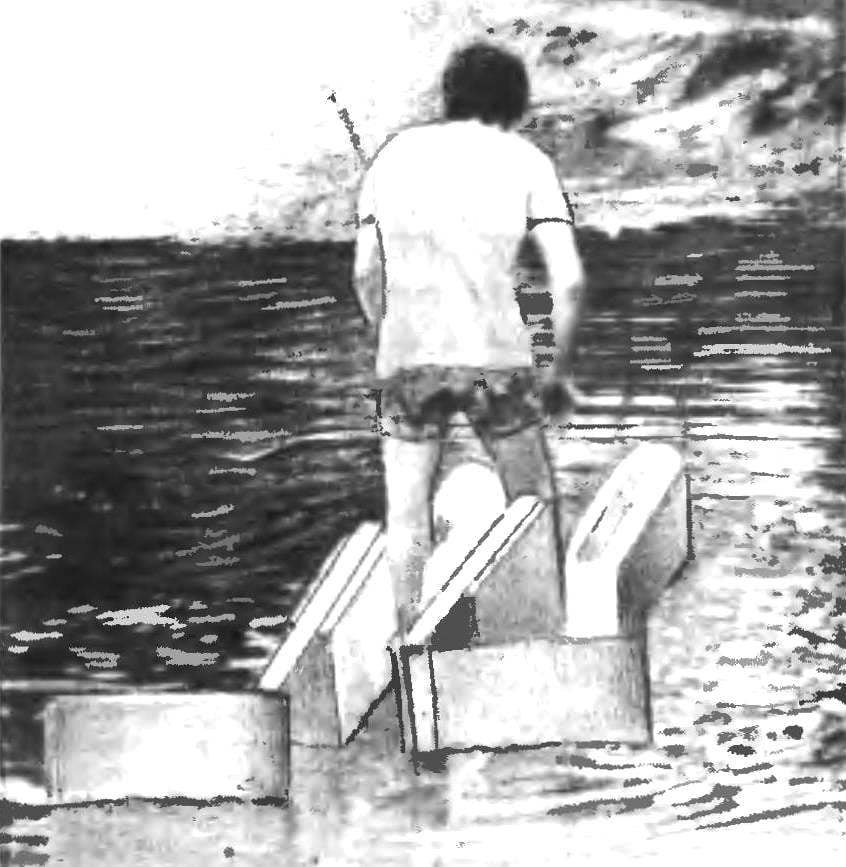 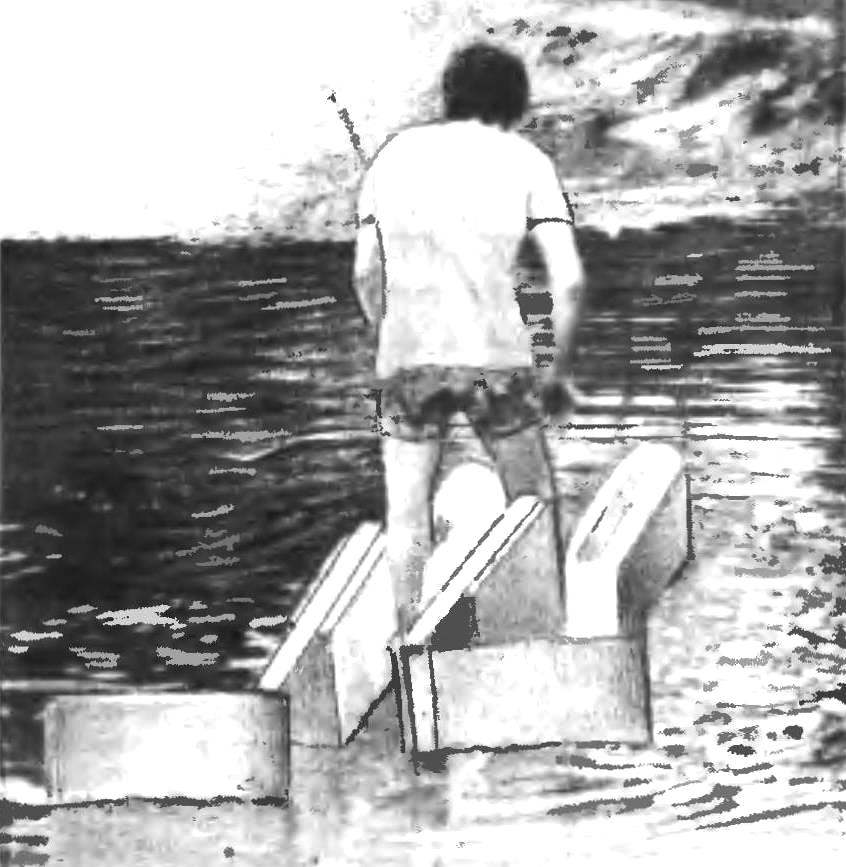 In the “M-K” №4 for the year 1989 was published an article devoted to the ski-Vodochody… I Read it and wished I still had not written to the editor, not shared with the readers of “M-K” for its development.

Of course, the idea of the ski-floats is not new. But enthusiasts of this “vehicle” they are constantly repeating the mistakes of predecessors. Therefore, almost all Vodochody seem more funny than enticing for samodelkina. About any “runs” on these skis, however. And the thing is that their designers did not think through what they are going to move, standing on these floats. And the major role they, as a rule, give the sticks with floats that are trying to push off from water. And it will agree, not very convenient. So before you start designing these skis, try purely theoretically to understand how they can move.

When walking on skis on the snow man had to push off alternately right and left foot, shifting at inching leg the whole weight of his body. Wherein the second ski moves freely forward. Similarly, in principle, should be the movement on the water. Shifting the body weight to one ski, the person should provide the maximum “grip” of the skis with the water. Free ski at the same time he needs seamlessly and with minimal losses to push forward. Having made a throw, skier redistributes your weight on both the float and the resistance to movement should be minimal. For the implementation of such a principle of the movement of the water can offer several options.

1. Ski-floats movably connected to each other so that they had the ability to move relative to each other only back and forward On each ski (on the right — right, left — left) are a kind of “paddle”. Stepping on the right ski, skier nakrekal the entire structure, with the right number of “fun” is in the water. This gives you the opportunity to take a full shock movement. Further, the person’s weight is redistributed on both skis, the “paddles” are on the water and a pair of skis has a minimum resistance. Then swing left leg, following the movement of the right, and the cycle repeats. 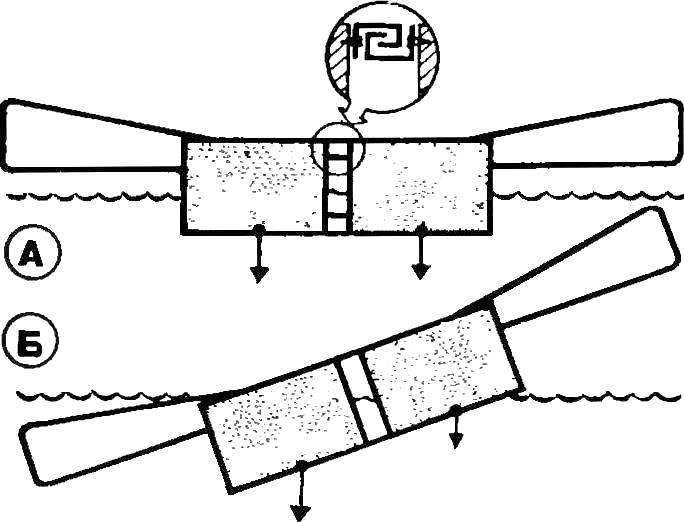 A skier is based on both the float, B is the skier relies on a single float.

2. The second possible design is similar to the first, but the skis are not linked. However, each also available in several cheerful. However, these paddle elements are not rigidly secured to the sides of the ski and pivotally on the levers. From opposite ends of the levers are floats. When diving, skiing, the float rises and lowers the respective paddle element in the water. The skier can only make a vigorous push a corresponding foot and then shifting his weight evenly on both skis to continue gliding. Then the weight is transferred to the other leg, again followed by a push, and the cycle repeats.

3. The third design has a non-uniform buoyancy along the length of the: front part of the ski — more, back less. When the skier leans on one float, that immersed in water unevenly, with trim on “poop”. In the water is a number of “fun”, mounted at the rear of each ski. 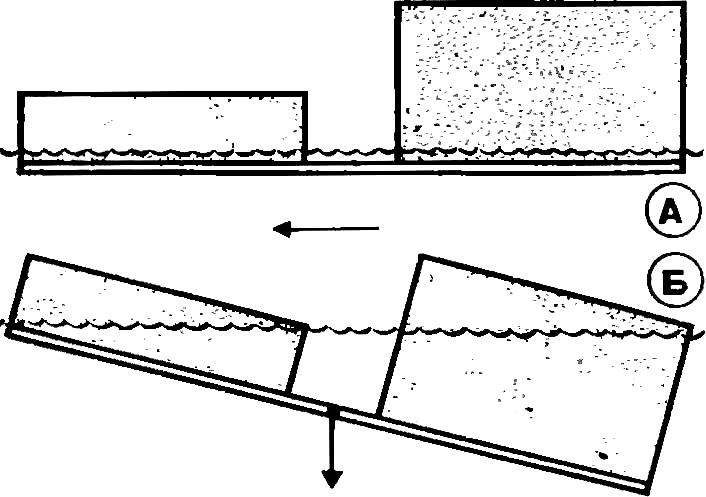 Option ski-Vodochody uneven (in length) buoyancy:
A skier is based on both the float, B is the skier relies on a single float.
4. From the previous project should be another option: attached to the ends of the ski fins. Such Vodochody allow you to move not only in a calm, but agitated.
Last year I tested two of the latest design. The skis I made out of sheet foam, securing it on a pine Board with a length of 2 m and a width of 0.2 m. At the rear of each ski was set to either “paddle” or rubber fins. Immediately I will say that the standard fins were not very efficient propulsion due to their small size. Respectively was a slight and speed of “running” with the propeller. Well, to move on skis with the “oars” can be more successful — the speed was 5 km/h was virtually the same as that of the pedestrian.

It should be noted that any poles with floats I when driving on skis don’t use.

The theoretical drawing of the float.
On the basis of acquired experience we want to formulate a number of requirements for ski-Vodochody.
1. Ski length should be 3…4 m. it is Desirable to make them foldable — this will facilitate and simplify their transportation.
2. The width of each of the skis should not exceed 200 mm — otherwise will have to stretch down, which is very inconvenient for traffic.
3. The shape of the ski makes sense to do as smooth, well-flowing and in the form similar to a canoe.
4. The displacement of each ski should slightly exceed the weight of the skier.
Well, now more about the design made me ski-Vodochody. Each of them is a float with a non-uniform buoyancy along the length; the tail docked by three “paddles”. The length of the float is 3.5 m, maximum width — 180mm, height in the rear 600 mm. total displacement of each ski is about 110 kgs. Note that ski-Vodochody require the sort of individual fit depending on the weight of the skier: the displacement of each of them should be 10…20% larger than the total weight of the skier and the ski.
Float skis constructively is a lightweight wooden frame filled with construction or packaging foam followed by pasting one or two layers of fiberglass. Thus prepared the floats are carefully vyshkurivaetsya and painted. Each it is desirable to determine a practical way of waterline: one of them is working, indicating the level of immersion skiing in the application of total body weight, and the other level with uniform support of the skier on both float.
As practically determined the most efficient level at which fixed “paddles”. By the way, to make them easiest from 5…6 mm plywood with subsequent impregnation with hot linseed oil and colouring.
I think that my experience will be useful for those who want to make yourself such here convenient ski-Vodochody. It would be interesting to know the opinion of these skis from the readers of “M-K”, which will take advantage of my recommendations.
My address is:
129081 Moscow, Clear passage, 22, room 24.
D. AVERCHENKOV