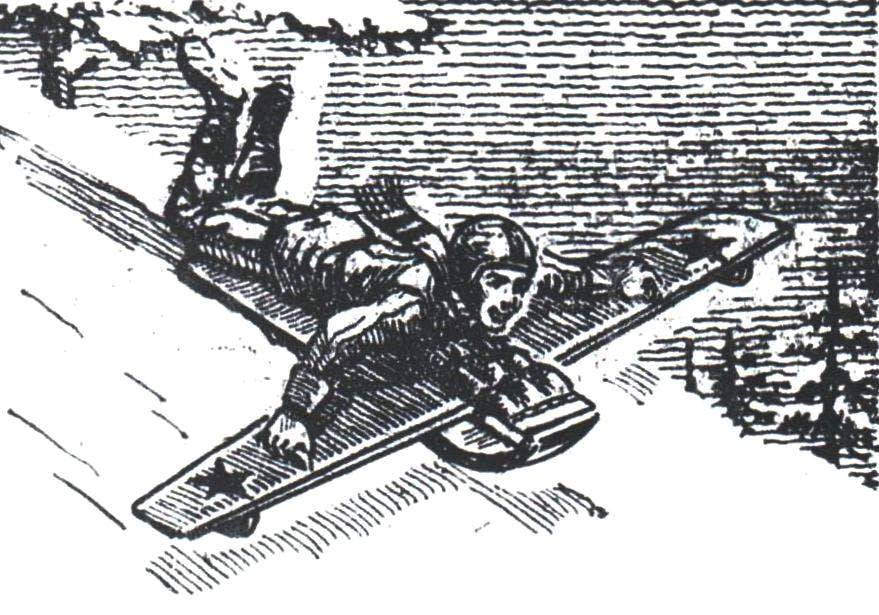 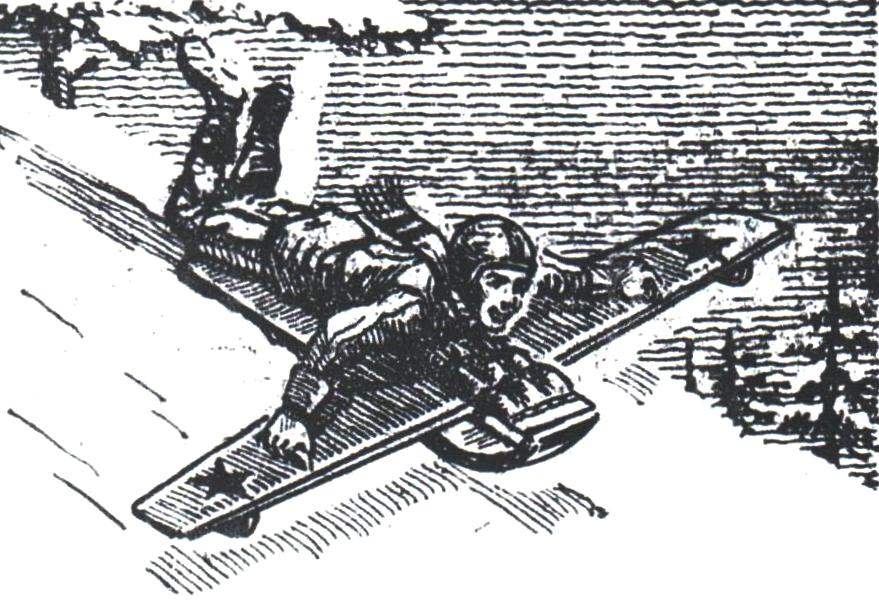 Needless to say that coasting on sleds is one of the most popular pastimes – a great form of active rest in winter. Is it because in different countries there are many quite different from each other types of sleds, from simple sieves, stuffed with straw, to multi-piece designs, the manufacture of which only a very good craftsman. Gradually transforming and improving, Luge has won recognition in the international arena and has long been included among the Olympic sports.

It would seem that for many centuries the builders of the sleigh would have to exhaust all their conceivable options. However, it will be about a sled that looks like a plane and give an entirely new feeling during the descent from the mountain, thanks to the soft suspension of the platform on which is located the athlete.
So the sled a plane, or a sled-the balancer (see Fig.), since the Foundation of mastery is the ability to maintain equilibrium, balancing the entire body. The platform on which the athlete rests, sprung shock-absorber of a motorcycle type that softens the bumps on rough tracks. For riding these sleds are best suited slopes that are generally used by novice skiers.
For the manufacture of sleds will need the following materials: lime, pine or spruce boards (for the manufacture of the wing and skiing) with a length of 1500 mm and a thickness of 25 mm with a width from 100 to 300 mm; leaf birch waterproof plywood size 1500x1500x3 mm, and furthermore, epoxy or casein glue, good sunduka hinge, two handles, and a pendulum absorber fork of the motorcycle or scooter.
The ski can be bent at the elementary device (the ladder), as shown in figure D. For this bow of the workpiece it is necessary to steam in hot water (this can be done in the trough, put on a two burner gas stove), and then, when the workpiece will stay in the boiling water for 15-20 minutes, quickly clip it in the bending fixture and tighten strong twine or clothes line. If the boards selected for the manufacture of skis, very dry and stiff, they are poorly to steam bending and can break. To avoid this, it is recommended that before steaming to make a fine hacksaw in the bow of the future ski longitudinal propyl, in which after drying of the workpiece is introduced a piece of plywood on epoxy resin. This simple operation will give the ski a high strength and shape consistency. 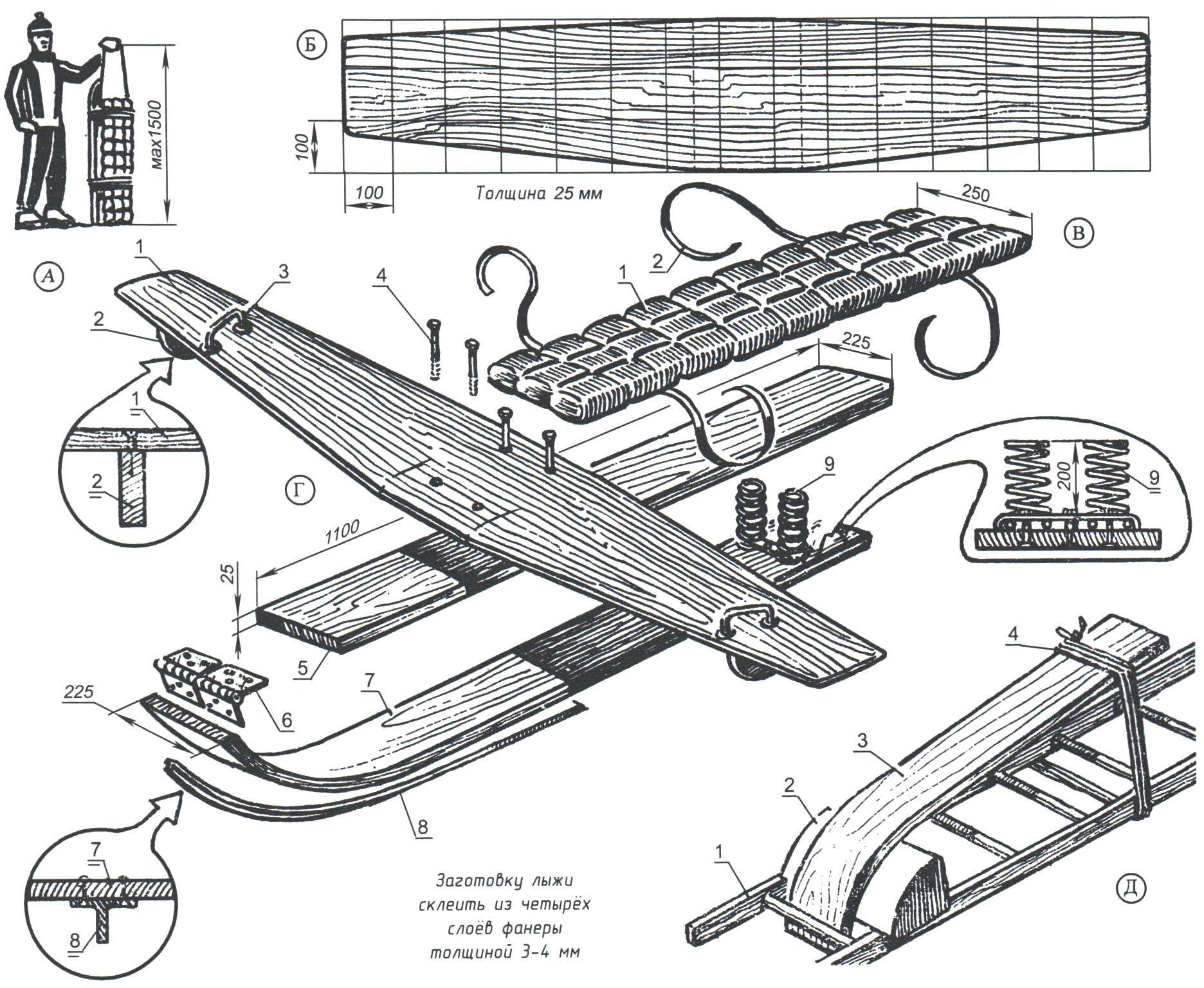 Sled-“airplane” – design and Assembly:
And the sledges Packed for transport urban transport; B – the contour of the wing span 1500 mm on the grid (in case of reduction for young children side of the square should make 75-80 mm); soft bedding: 1 – quilted changing Mat; 2 – ribbon for attachment to the Board (the length of the mattress should be equal to the length of the Board); Mr. the main parts and their arrangement: 1 – wing; 2 – underwing rails; 3 – handle; 4 – bolts connecting the wing to the Board; 5 – a Board; 6 loop connecting the Board with the ski; 7 – ski; 8 – metal undercut front of the ski (T-bar profile height 10 mm); 9 – damping Assembly of two coil springs attached to the ski and Board cross the M6 bolts through the steel plate; D – the simplest device for flexible sock ski: 1 – ladder; 2 – lining; 3 – processing of skis; 4 – a tethered cord.
In the manufacture of skis from planks of its front part should be steamed in boiling water; when gluing multiple strips of plywood there is no need.
The next stage is the manufacture of the wing. Its outlines are given on the grid (each square is equal to 100 mm). Making the wing drawing in full size on paper or plywood, it is necessary to connect the required number of existing boards (if there is such a wide Board to make the wing fit on her completely). Game wing precisely, on a carpenter’s table or focusing astrogate his right and left half in the drawing (see Fig. B). Carefully crafted with a file and sandpaper the wing is impregnated with hot linseed oil and covered with bright paint so that the sled would stand out better in the snow.
Fabrication of the platform on which is placed athlete will not cause difficulties: it is a pine Board size of 1200x30x25 mm, laminated for greater strength plywood, 3 mm thick At the bow, it connects to the ski with conducing loop, and in the middle podrazdelyaetsya spring or a motorcycle shock absorber. In a pinch, you can use the chip flat automotive leaf springs or inflated soccer ball enclosed in a canvas case; there are many different solutions. It is important only that the shock-absorbing element had a reserve to absorb shocks when riding from the mountains. Therefore, under static load (influenced only the weight of the athlete) a shock absorbing element should not “squander” to the end.
The location of the handles, and underwing skates are set individually. To do this, arms outstretched, to lie down on the sled and to determine the most comfortable position for the hands.
The last step of fabrication of the pillow, on which rests the athlete. At its core may be foam rubber or quilted with cotton wool (for example, a piece of an old jacket or blanket). The outer case should not be slippery, otherwise it will be difficult to control the “plane”. During operation of the sled it also emerged that in the heavily-Packed snow or hard crust ski there is sometimes skid, and the design becomes unmanageable. In these cases, useful metal comb (“undercut”) fixed to the sole of the ski. It can be manufactured from steel of area 10×10 mm or a little smaller (it will have “scalloping” the regiment to prepare a file to a height of 5-8 mm). The undercut to the ski it is necessary to strengthen as much as possible – it is best to use M4 screws with countersunk heads.
Technique drive has features that the athlete will feel after the first runs. The ability to maintain balance in people is different, it depends on the condition of the vestibular apparatus and reaction speed. So if one pilot offered beautiful sled from going down, the other is less prepared – long “pick your mountain” before you master the secrets of mastery. In all cases it is necessary to remember one mandatory rule: first, “to start” with small slides, and only having mastered the simple slopes, go to steeper slopes. With a sharp touch of snow by the end of the wing, the sled can instantly turn around and throw the rider.
During transportation to the subway or commuter train wing it is necessary to Unscrew and fold sled in the package, as shown in figure A. For this purpose the bolts that connect the wing with the ski, you should pick up a set of wing nuts.
G. MALINOWSKI