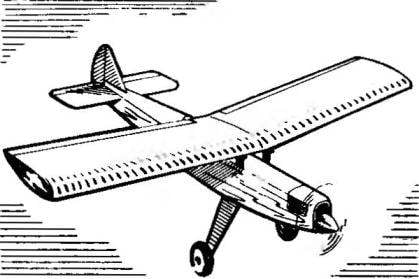 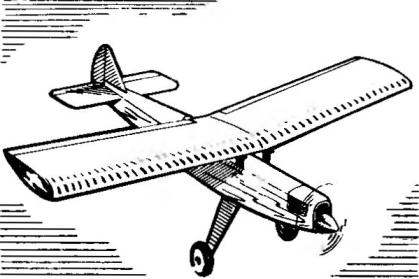 Despite the popularity of radio controlled model airplanes-srednevekov, the attention of designers-modelers often drawn to the now obsolete scheme. And this is understandable — after all, the “big” aviation, such machines include a spectacular cabin aircraft, starting with the domestic Yak-12 and ending with dozens of options American Cessna.

Do not sidestep this scheme and the designers of “small” aviation: on model market you can find many Western kits parcels kits parts RC vysokopreosv. It is considered that for the training of the model is needed primarily increased resistance roll, which supposedly ensures the application of the scheme to “high”. However, allegations of high resistance training models and support through the use of the above-mentioned scheme is quite controversial, however, model-vysokopilya appear again and again.
Paying tribute to the “retro” style in modeling, we offer our readers a successful, in our opinion, the development of radio-controlled models, built on a rare in the modeling scheme “parasol” (its main feature is the location of the wing on struts above the fuselage). Such a solution simplifies the manufacture of the apparatus for eliminating multi-part cockpit and at the same time makes the microplane fashionable retro style.
The main tasks that were solved in the design of the proposed model was maximum simplicity of construction, strength of all the main elements, technology, and the creation of a small unit mass. Test the constructed model showed that all these problems were solved adequately — and this despite the use of only domestic materials (balsa needed only for rudders). In addition, the flight once again confirmed that the parasol is very good for training purposes, especially in calm weather. Under such atmospheric conditions, the model literally conquers the pilot for his ability to slow steady flight and good response to rudder.
The basic data model
Wing area……………….33,6 dm2
The area of the city on………………………7,9 dm2
Total weight…………………….1900 g
Specific load of 56.5 g/dm2 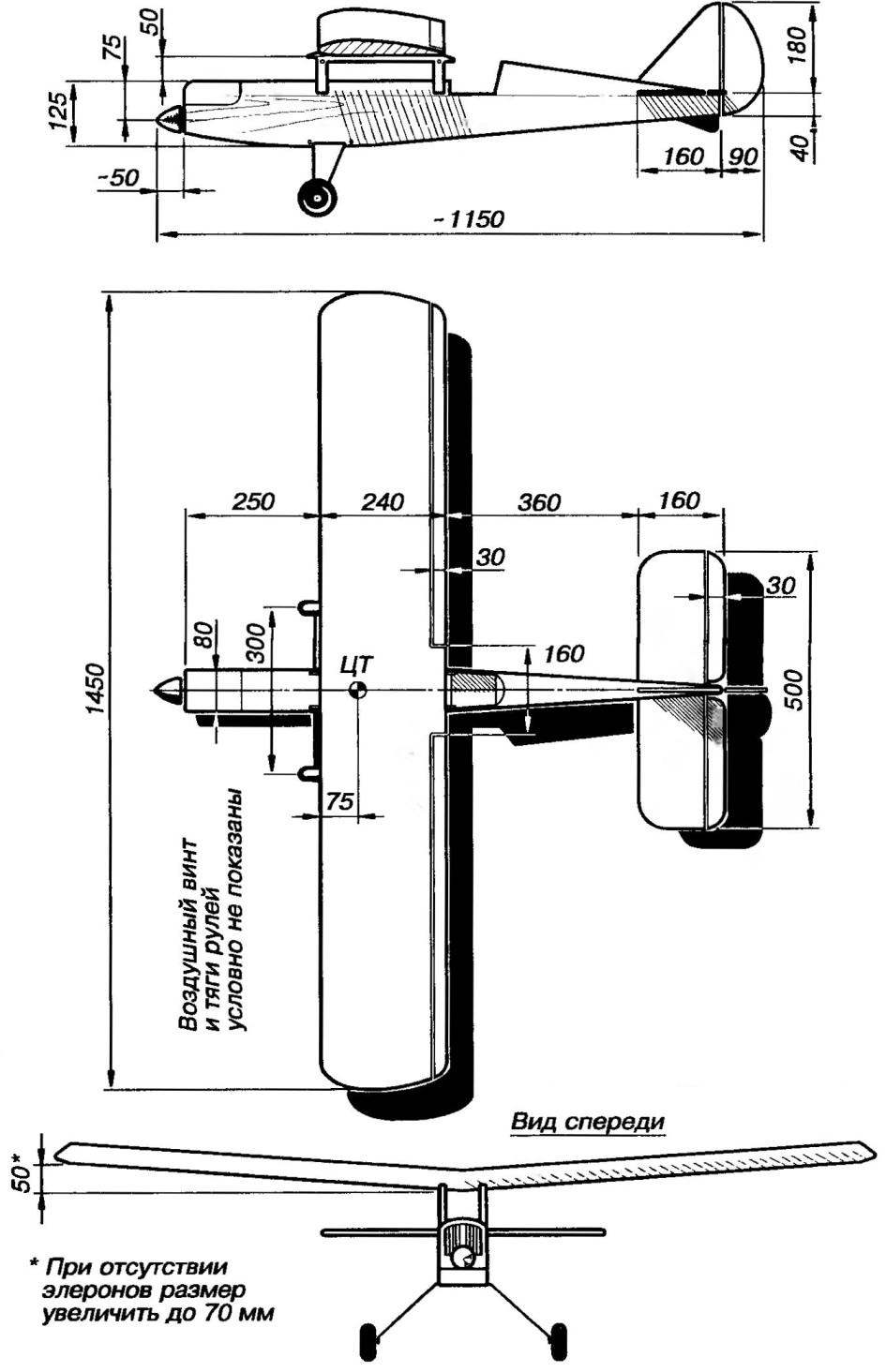 Training RC model airplane under the engine a working volume of 6.5 cm3. 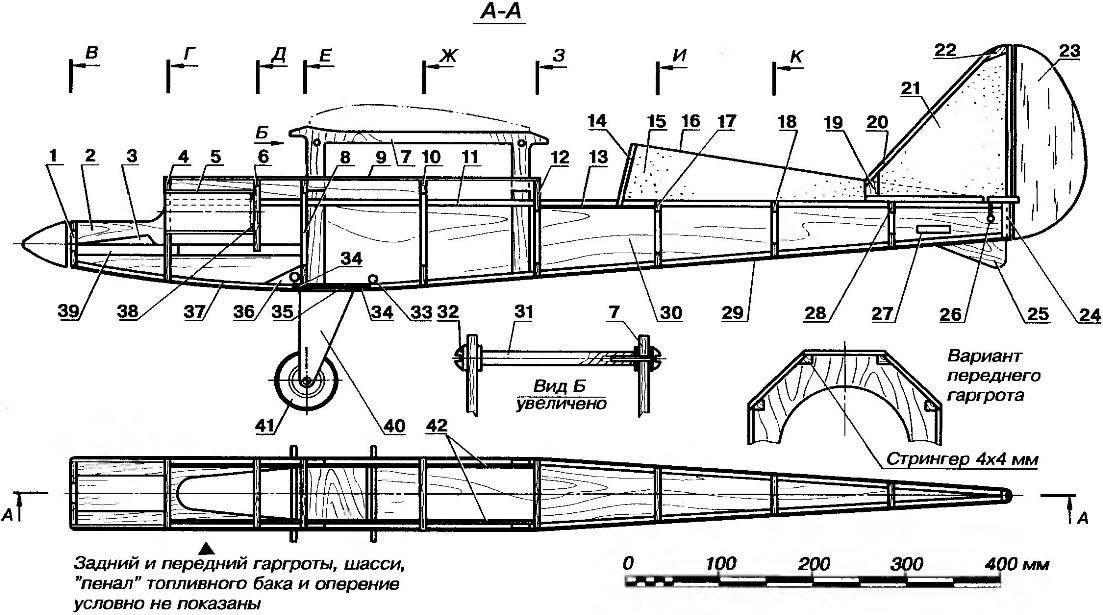 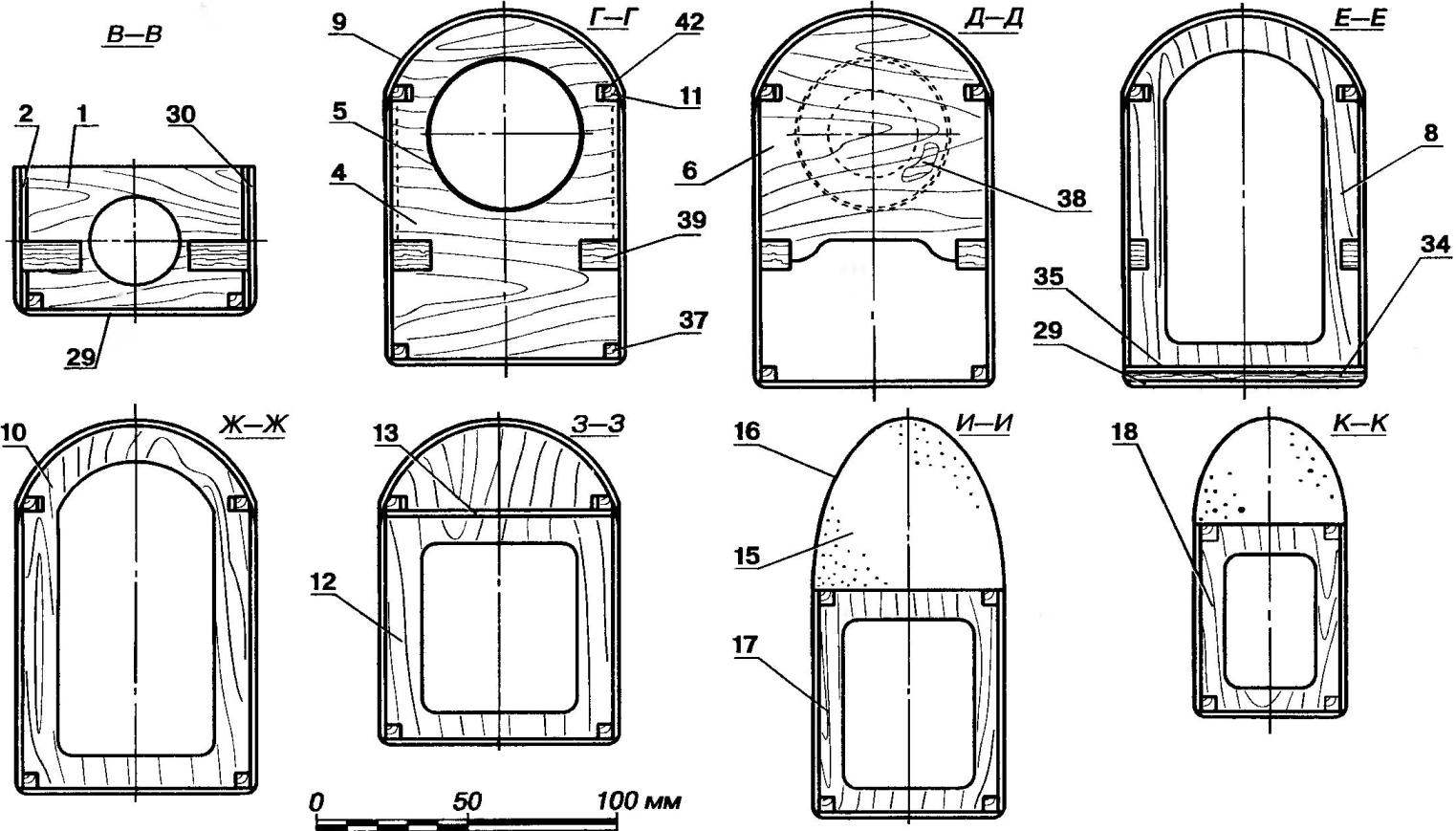 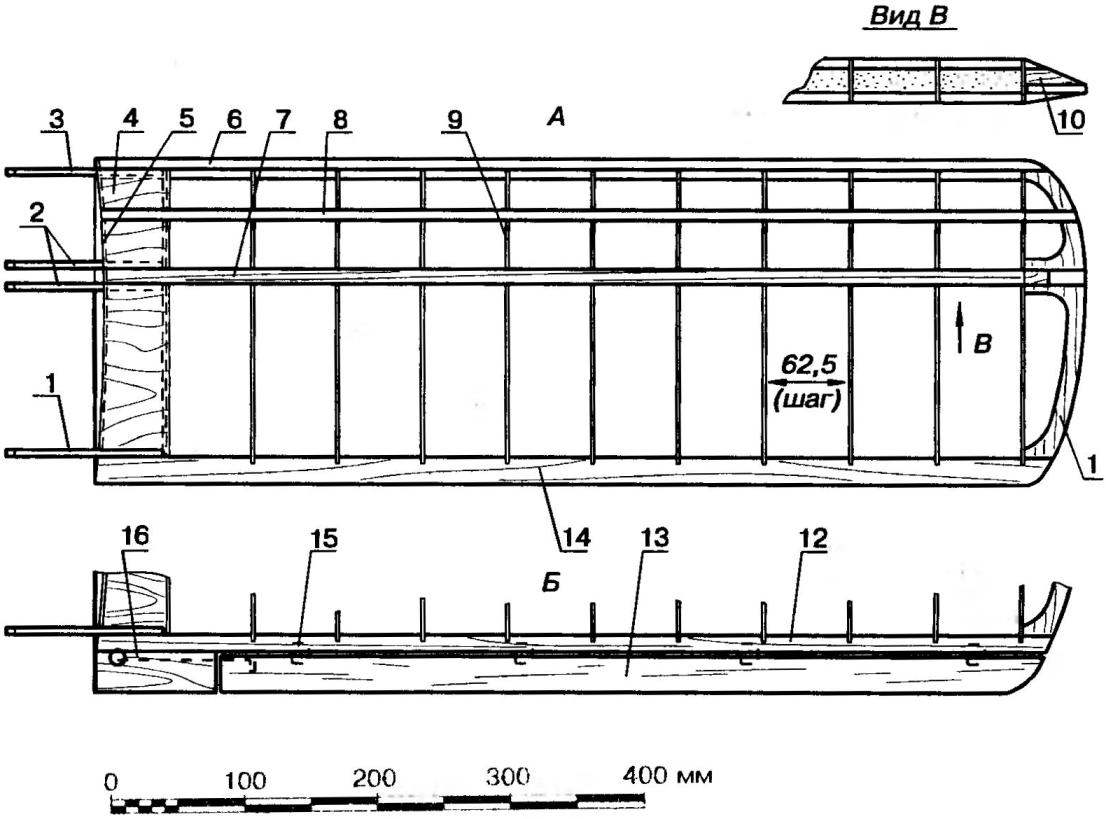 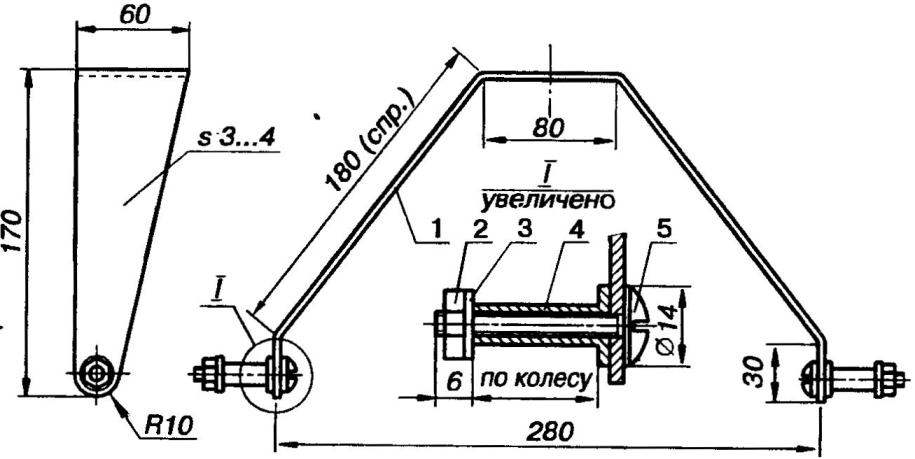 Landing gear:
1 —bracket (made of anodized aluminum, the sheet s3…4), 2 — nut M4 3 — puck, 4 — bushing-nut-threaded, 5 — M4 special screw (St3).
Fender classic design and construction, going it of the two symmetrical halves on a flat Board-the slipway. Profiling close to more than well-known “Clark”, providing good flight characteristics in a wide speed range and soft stall characteristics. The relative thickness of the profile is such that it allows no doubt about the stiffness of the consoles to use and more convenient than in modelling of the fuser for covering all bearing surfaces. Special explanation as beselerallee option wing and elerony, is not required. Note that in the presence of ailerons after Assembly of both consoles in a single wing in the Central area should be made a “pocket” to accommodate the additional steering of the machine. When picking a model by using short wires and auxiliary (safety) connector connects to the receiver. After covering the wing are thoroughly checked for the absence of twists or symmetric, if they are set. Most beginners simply do not know what to obtain good stall characteristics can be used to tighten the ends of the wings relative to the Central section by the angle around minus 1°to 1.5°. On the other flight characteristics such twisting is not affected, except that it may require a small trim of the rudders (in the upward direction).
The wing is attached to the front of the fuselage with a rubber band,moving through the front and rear hook-shaped ends of the rack.
The front chassis is bent from a pre-sawed to the desired shape of the plate (tempered aluminum) with a minimum thickness of 3 mm. When the width at the base about 60 mm, the rigidity of this stand will allow even a very rough landing without having to each time had to edit the flattened plate. If available will be only semi-solid material, suggest to increase the thickness stands up to 3.5…4 mm. Wheels are standard, with a diameter of 60 mm.
The final stage of production models external finish. If you want you can zakoptelova engine, with the square exhaust ports on the cowl for the cooling air needs to be slightly larger than the area of the inlet. The paint scheme — any provided that of difficulties in determining the position of the model in the air even over large distances will not (a desirable contrast-color color separating not only the top and bottom of the plane, but the right and left sides of at least the top).
Before the first test flight, besides the usual “set” mandatory inspections (the reliability of the instrument, the charge level of batteries, etc.), it is necessary to control all of the installation angles of the tail, wing and engine (the stabilizer and wing to “zero”, and the angle of attack of the wing measured from the bottom forming a flat profile in the Central part, the axis of the engine crankshaft needs to be tapered down at 5°…7° right and 1.5°. The angles of deviation of the rudders are selected within the following limits: the ailerons to 15° to both sides, the elevators so the rudder is at 30° to both sides. Alignment of the model have to be specified on the drawings, and the wing, as already mentioned, there shouldn’t be random and the more asymmetric twist. Of course, when the first flight is highly desirable, the presence of experienced/pilot who I can trust to fly and the initial trim of the model.
V. ZAVITAEV,
master of sports