Popular Yugoslav magazine “ABC-technology” in its two hundredth issue published material chief editor Vekoslava Bosnar about the amazing sled, designed by fans of the snowy slopes.
As in the southern country, fanned by the warm winds of the Adriatic, also like to ride a mountain on sleds? Love! And even come up with their design is such that it can find application we, the northerners, on the slopes of the Russian mountains.
We chose one of the most interesting developments is published by Vekoslava Bonaros is quite complicated. It will have to mess around thoroughly, but the pleasure of skiing on snow toboggan promises to be above average.
So the sled!
Speed run is much higher than that of the conventional sled. Besides, he is able to slip right off the whole family. The design uses parts from bent wood, so the work should begin with the manufacture of the bench. 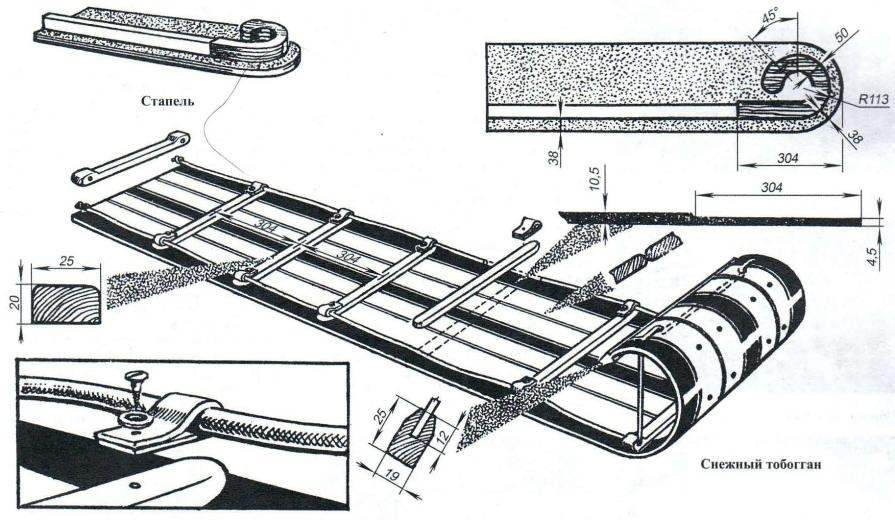 The slipway is a plywood or a wooden Board of thickness not less than 20mm (this is useful for drawing Board). It fixed the wooden block section 50×75 mm length 915 mm, and a part that is intended to bend the front part of the rails-ski tobogganing. It can be cut and pasted together from four to eight layers of plywood with the subsequent joint processing in the dimensions indicated in the figure.
Runners-skis (7 pieces) best done of ash. Before bending the ends need a good steam and boiling water (duration of exposure not less than two hours).
After curing, the workpiece is removed from the boiling water and by means of clamps fastened in the stocks. To release these parts from the clamps are used only in 24 – 48 hours.
Toboggan run you will also need 6-8 oak bars section 25×20 mm and a length of 440 mm.
ASSEMBLY OF THE SLED
The finished skids are placed on a flat surface and drill holes for screws through which the transverse bars are privernuty to the runners. Place joints of rails-ski and cross enhanced by casein glue. The distance between the crossbars shown in the picture.
Front runners United by a rail having a longitudinal groove. To the cross bars by screws privernuty leather clamps (via skips rope with a length of 4.5 – 5 m). In front it passes through the holes in the skids.
Color. The sliding surfaces should be twice (intermediate drying) is impregnated with hot linseed oil and then beeswax. Toboggan is painted with bright enamel paints.
V. BOSNAR