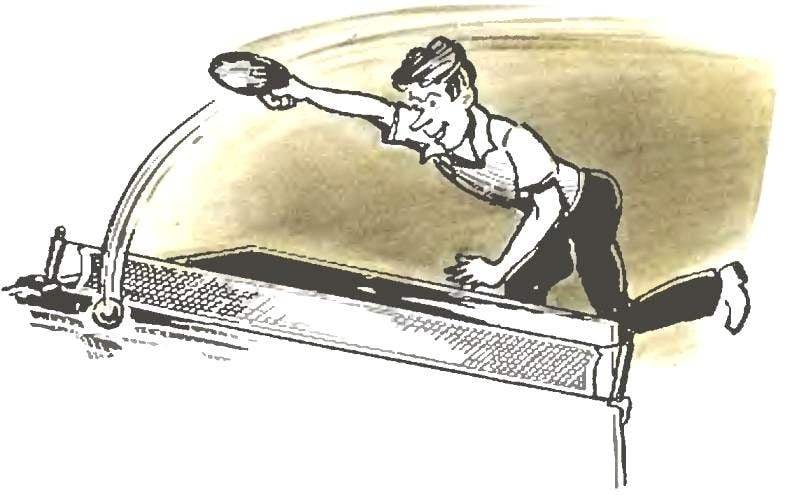 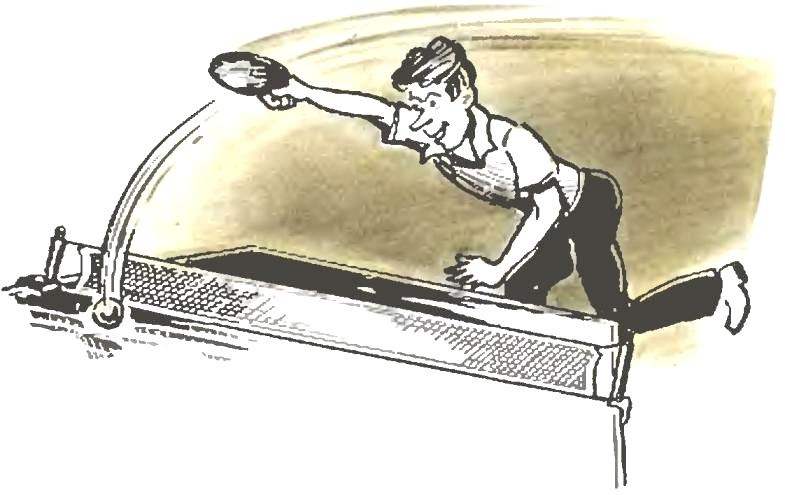 Well the chess — Board with Fi!urami doesn’t require much space, can even be pocket, can not be said about fans of table tennis: they require at least a little, but the room, the main area which is a table (very disturbing in the non-playing time). The proposed design solves this problem — after play the table can be compactly folded. Moreover, from below it is mounted a small cart on wheels furniture, allowing you to easily move the folded table in a convenient storage place.

Like most collapsible or folding options, the design also consists of two separate halves, the border of which passes under the net. The main difference from the existing tables in the solution of the medium supporting portion abutting one-half and them folding. Despite the apparent abundance of details, all designed simply.
The base of each half of the table — frame, which supports its own half of the countertop. At the junction of the frames and palustrine embedded card loops; they allow the table to be folded, with the lowering of the joint. This is prevented in the operating position attached pivotally to the frames of the folding supports are resting in the cart.
To the sides of the truck from each side frame depart articulated struts, usilivayuschie support stiffness in the working position and serving as a kind of guide when folding. They thus rested in a triangular limiters — rails attached to the frames closer to their junction. Thanks to them, ensures the stability of the folded halves of the table in a vertical position.
All of these structural elements – wooden, made of planks and strips with thickness 20 and 30 mm. the Only part of the bar 50×50 mm main legs of the table. They need to say, as they are not attached to the frame and is also formed. 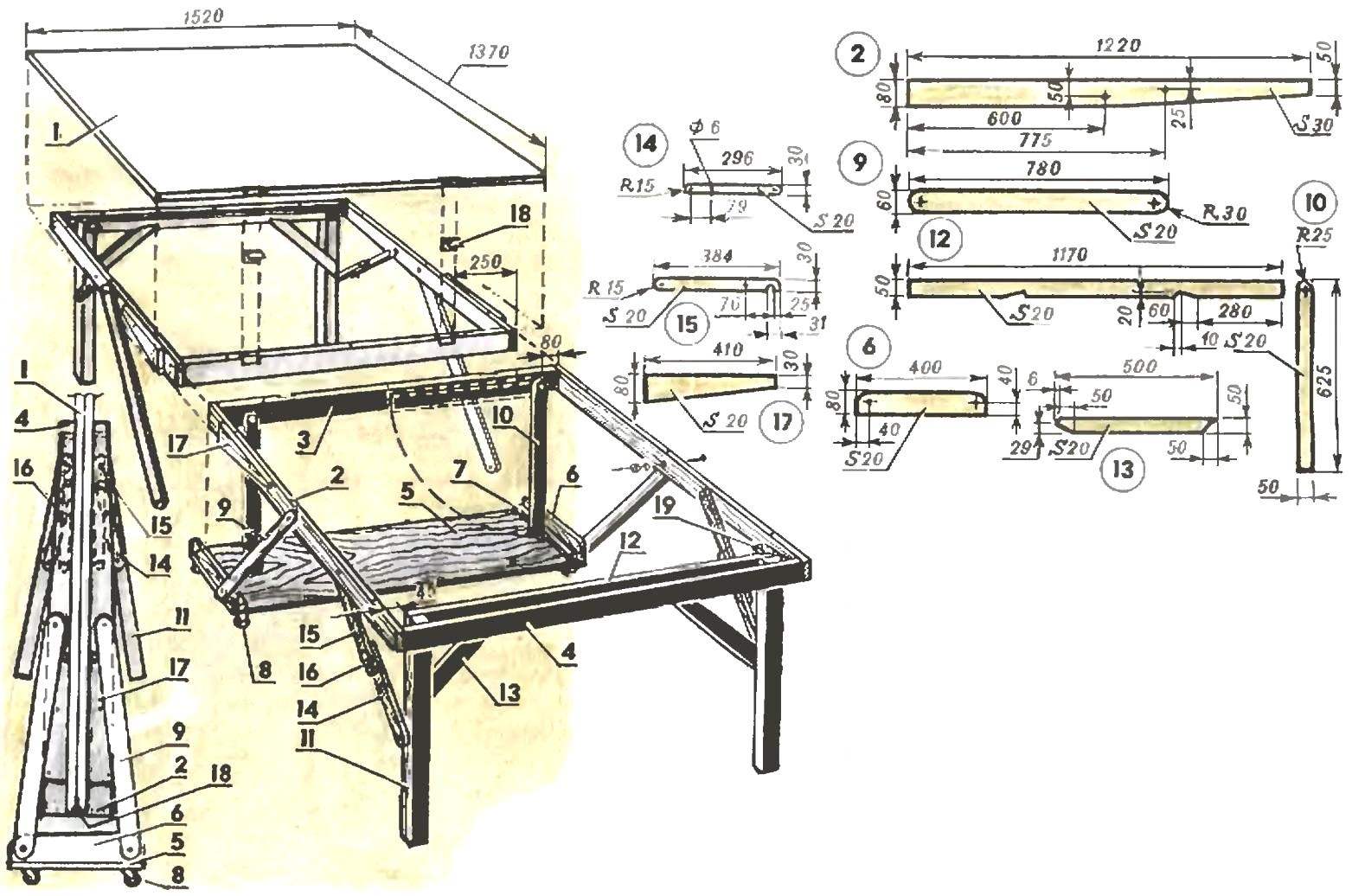 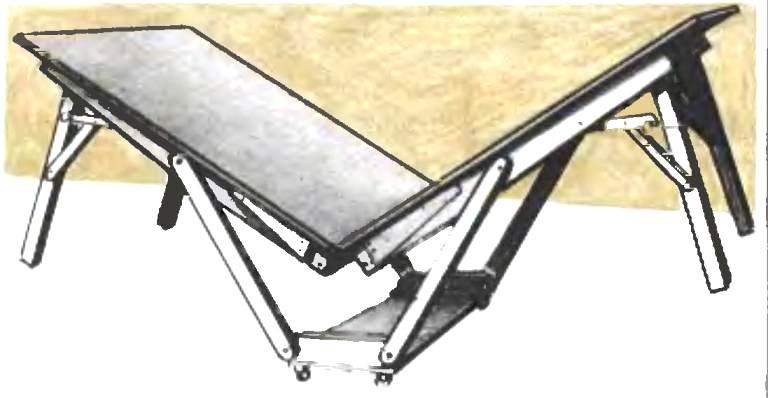 The initial time of folding table. 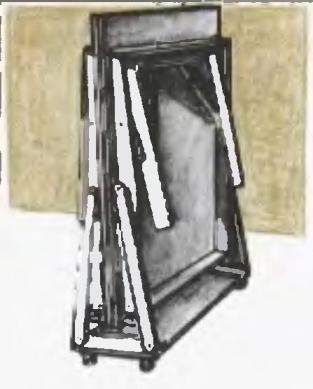 The table folded on its own cart.
The legs are separate independent nodes table, each of the end sides. Each node is a P-obrana design that includes two legs and attached the top of the crossbar, which rested two feet coming from padmasini of the wooden slats. The resulting rigid support of the table is flush to the frame, but is attached, as already mentioned, not to her, but directly to the top (using two card loops) — have the opportunity to develop.
To the legs on the sides of the hinged strut, each consisting of two strips 20 mm thick base and the retainer. Last longer is primary; at one end it is attached to the frame and closer to the key, which has additional fixing its end a hook, the engaging pin screw main rack. Struts when folding the table are in mutual engagement to form a rigid strut, not giving the legs even to stagger, and even more emerge in case of accidental push of the table during the game.
Finally, a few words on the countertop, or rather, of its halves. For they fit a sheet of plywood with a minimum thickness of 12 mm or chipboard. Mount to the frame with screws with the heads wpoty. After careful grinding with emery surface is covered with a nitro – or oil-based paint of black or dark green; the contour of the tops of white paint is done narrow band.
According to the magazine “Earmaster” (Hungary)