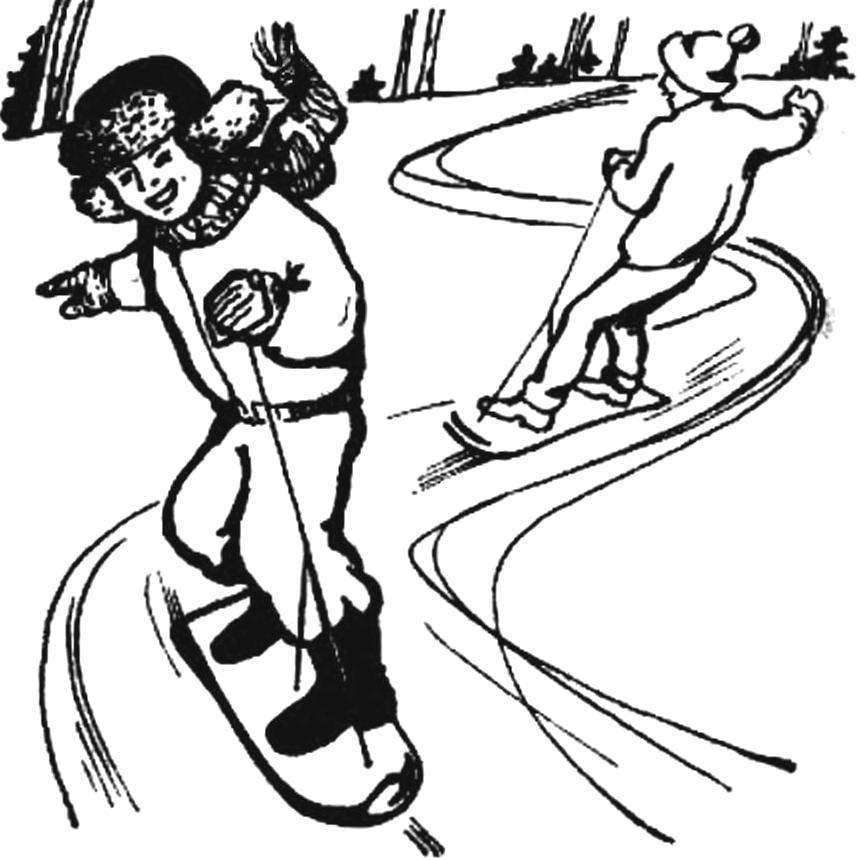 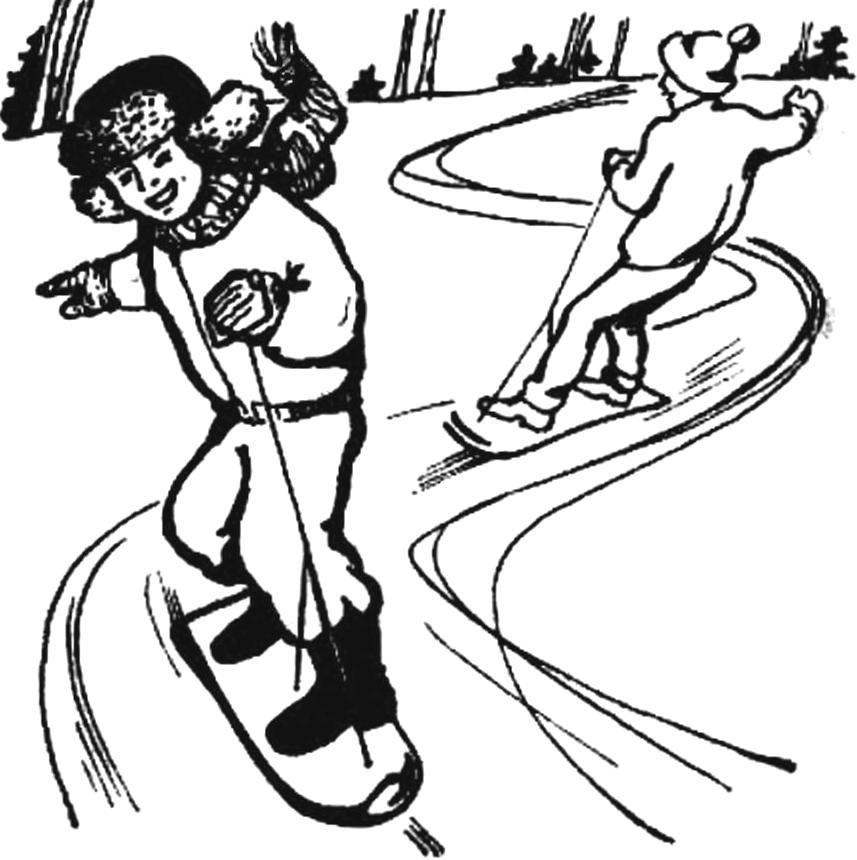 On the opposite slope of the ravine, where a tower stretching up gold under the bright winter sun the trunks of the pine trees, down the skier. He rolls down the fresh, the night fell and now fluffy clean snow. Here he turned sharply across the slope, holding up a snowy trail, I stopped for a second. And down again again towards. Steep sharp turns, dive and stop. Skiing will not do so, even on the mountain, even on a solid Naste. Yes and it is something special — that a back, face to the slope. Everything he gets is free and easy, only one little tilt of the body, it seems almost effortless…
Came down, lifted his little snow surfer, and upstairs again to the pines and the sun.
That did not come up for skiing the mountain: sleds of various designs, skibob, mini-skis, about all of them, regularly tells the magazine. In recent years, many began to get involved in a land surfer who was called “skaterboard” roller Board. However, to ride it only on hard surface: concrete or asphalt. For the winter time of year meant snow surfer who resembles, especially in management, skaterboard.
Snow surfer — short and wide monalisa, plastic or wooden. The front part of it, as expected, cool rises, slightly less bent, the heel; from the middle of the ski is significantly expanded. In cross section it is an inverted trapezoid, as this form of sliding surface allows you to make turns or to slide down the mountain on the side, while the descending slope is used the entire area of the ski.
Along the bottom of the structure are eight metal edge: six internal and two on the lateral side members, and extending part of the fortified in two rows. Crashing in the snow, the edges do not allow the ski, for example, when driving across a slope to slip down; this is especially effective on hard — Packed or icy slope. To improve the efficiency of the braking edges back row are at an angle to the longitudinal axis: the inner have an angle of five degrees, ten. It would seem that the edges, especially the rear, need to do is curved in an arc corresponding to at least the minimum turn radius of the skis, however, as practice shows, it is permissible setting a straight edge. 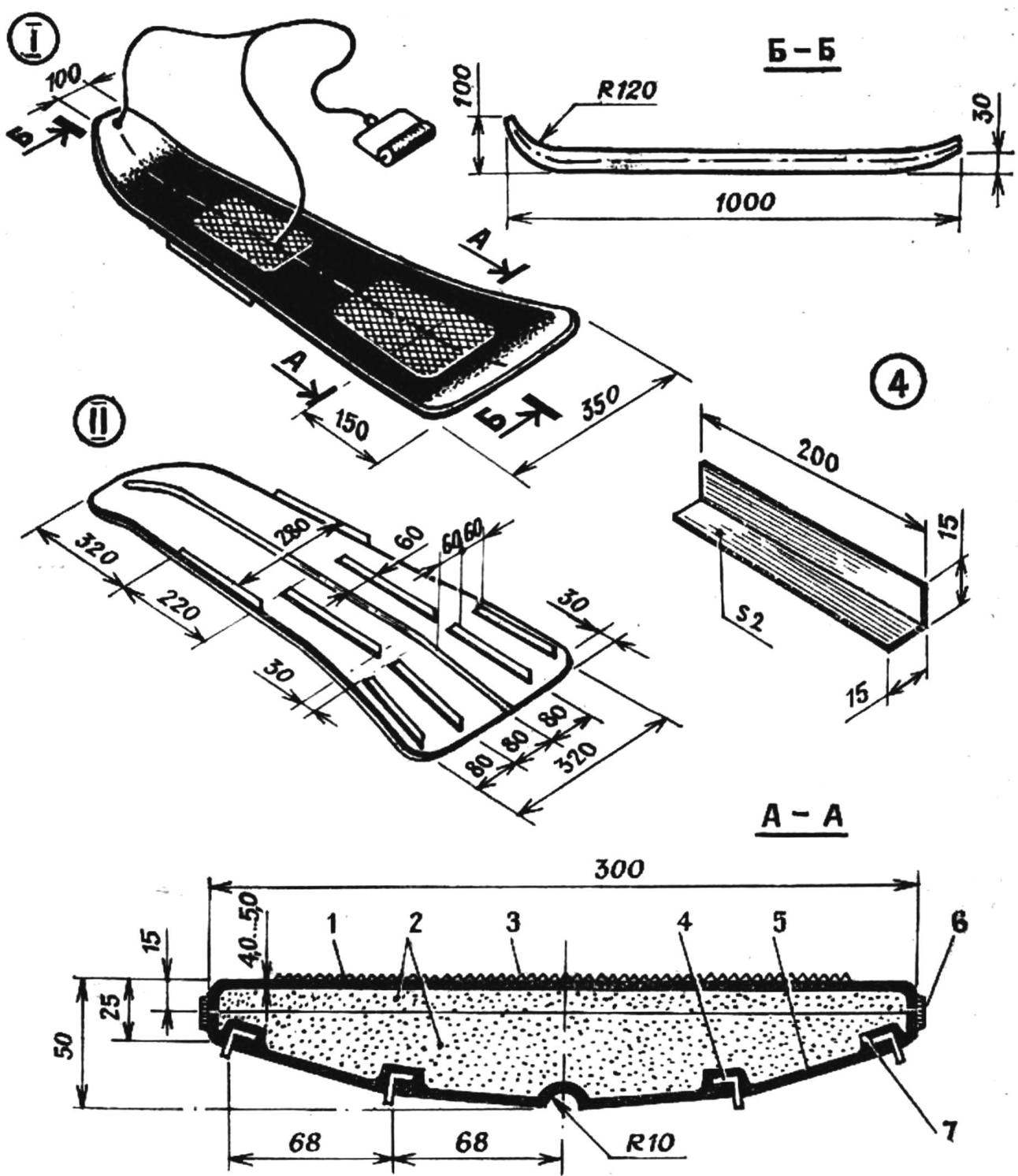 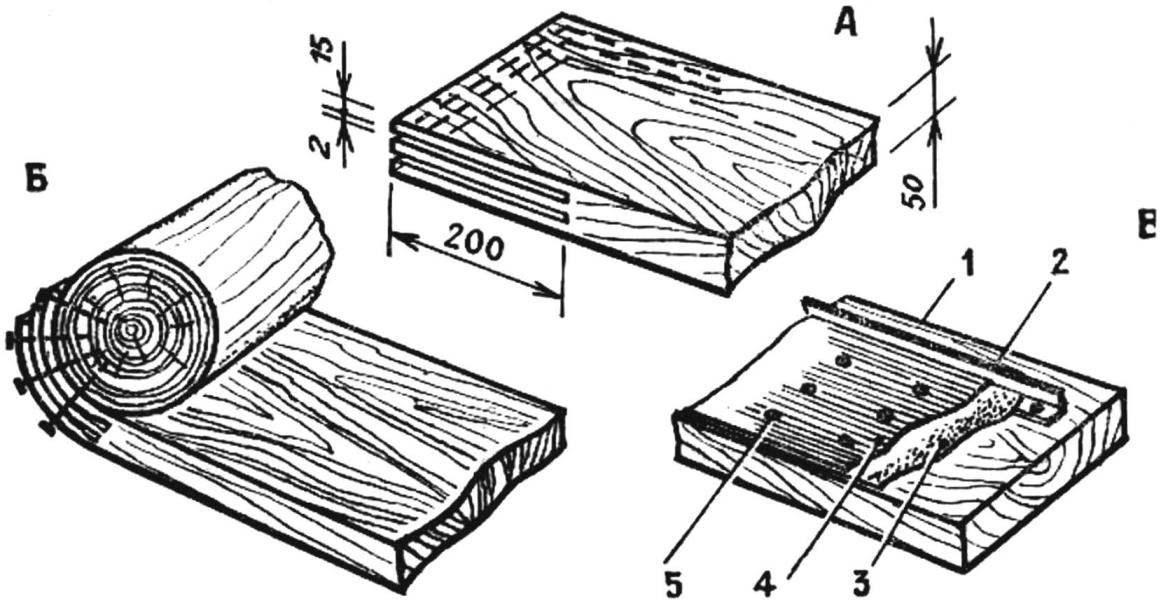 Manufacturer of wood monoskis.
A — preparation of a sock skis for bend B — bend formation on the boob, In the manufacture of a sliding surface of the ski:
1 — body, 2 — edge, 3 — plastic spacer 4 — leaf sheets, 5 — mounting screws.
Along the entire monoskis — in the middle of the sliding surface is a groove, stabilizing its position when moving on straight courses.
To make snow surfer can matrix method using fiberglass and epoxy resin: this technology has become fairly widespread and well known.
The edges of stainless steel should have T – or l-shaped profile. This feature affects primarily the design of “idiot” and due to the presence of shallow grooves on the ground of their subsequent gluing. So that the edges are firmly retained in the body of the ski, did not stagger and did not drop out, it is necessary to serverlet each of them for several holes and paternot strands of fiberglass, which are then embedded in the grooves.
First vyklevyvajut both halves of the shell thickness should be about 5 mm and tightly glued in them for the epoxy pieces of foam; the protruding material is cut flush to the heated wire. The subsequent operation is the gluing of both halves and gluing the seam tape. It is recommended to use fiberglass with the thickness of 0.4—0.6 mm and put it in 10-12 layers with an overlap of 3-4 mm, and you can take pieces of any length.
Of wood to make monaliza even easier, but it will be slightly heavier. The only difficulty here is the formation of a front of the curl. You can just “dissolve” toe in several layers with cuts and steam them in water, and boiling for 2-3 hours, and then dried on the profile blank with the given curve. After that they performed gluing: be sure to water-resistant glue. 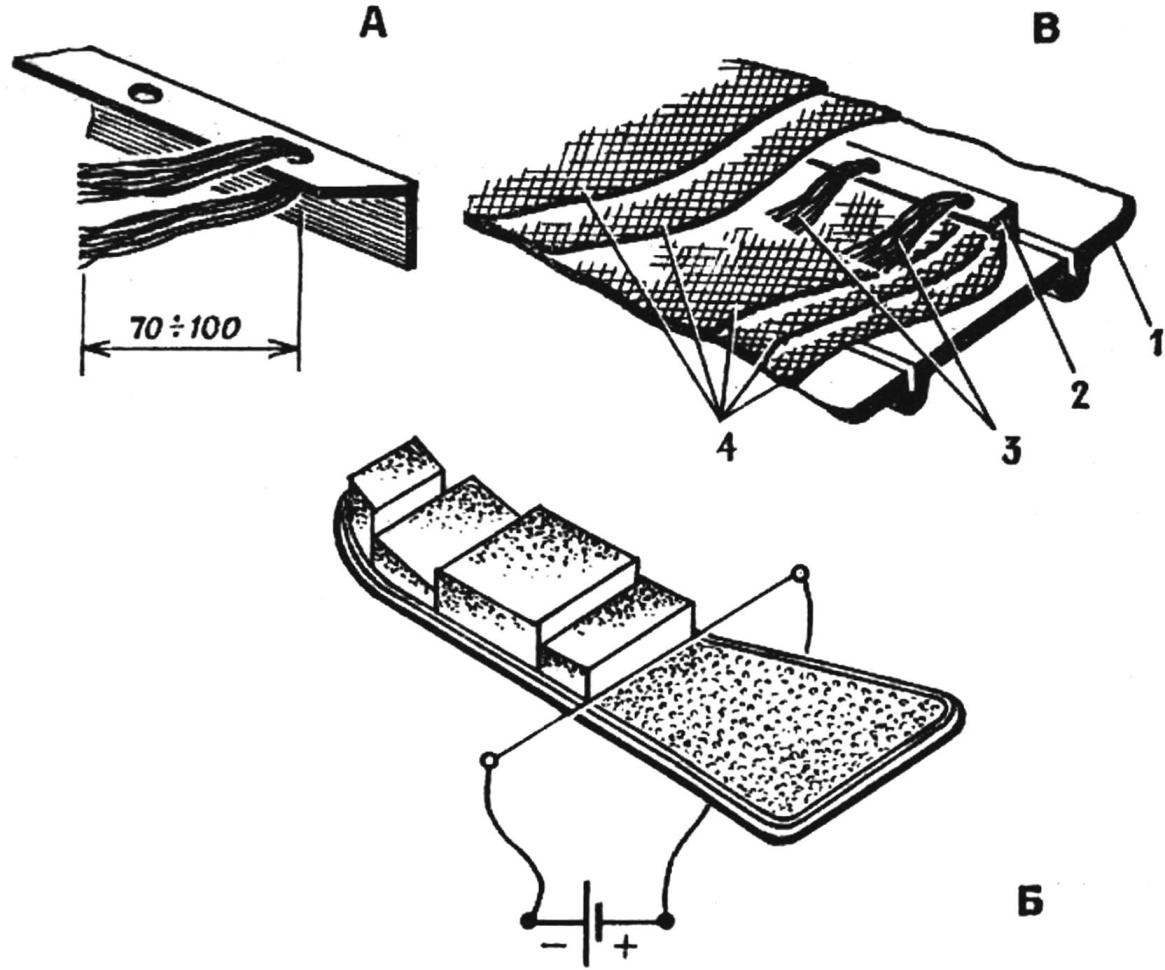 Sealing edges in the case:
A — cut B — cutting of foam by string, In the sealing of strands:
1 lower paleobiology, 2 — edge, 3 — strands of optical fiber, 4 — elephant fiberglass. 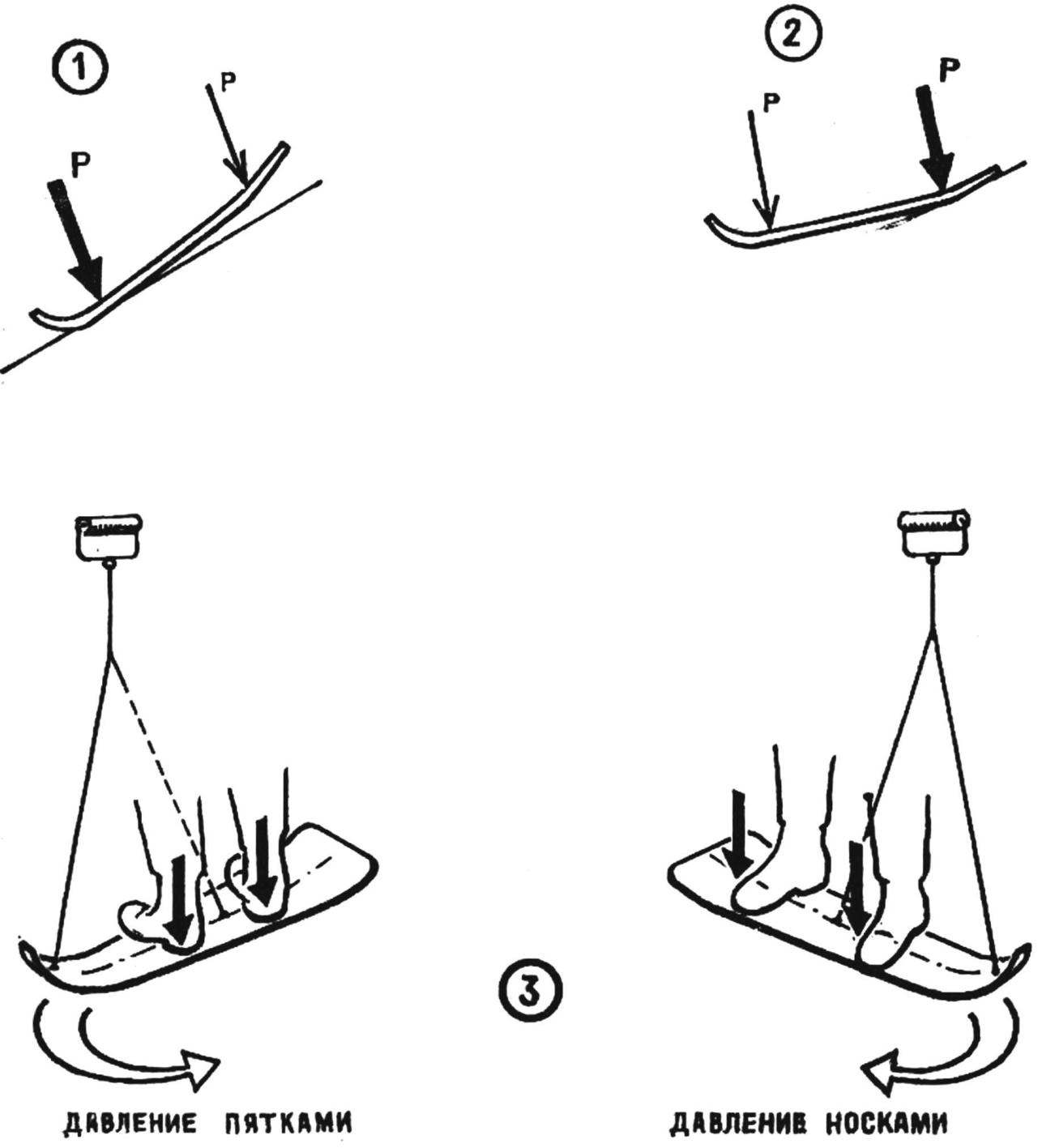 Management techniques monaliza:
1 — acceleration, 2 — slow motion 3 — execution of turns.
The lower sliding surface is coated with plastic and upholstered with tin or sheet aluminum. On the support platform from above glued corrugated (rubber) coating.
Learn to control snow surfer easier on a gentle slope. Stand on the ski and to set the speed slightly shift the body weight forward. Keep the legs relaxed, slightly bent at the knees and trying to absorb the irregularities of the slope. To brake, shift the body weight back, then fanning the edges will create additional resistance to movement.
When turning to increase the pressure of the toes or heels on the other side of the skis where you want to turn.
Stand on monolize helps pull rope with a wooden handle is attached to the toe and in the center at the reference sites. Holding the “reins” vnatyag, easier to maintain balance on “runaway from-under feet” exercise equipment, and it is easier to “travel”.
Yu. a. ZOTOV, N. SHERSHUNOV