The now familiar story on television in winter — the removal of a detached ice floe ice fishing fans. Almost every year we show how MOE specialists, helicopters, boats or ATVs to the rescue of hapless fishermen.
Such incidents are not uncommon in the freezing waters of the country. Moreover, fishermen often go on the ice even in the car, constantly risking to fall and lose if not life, then at least the car.
I also go fishing, not only in summer but also in winter. However, unlike other fans to sit over the hole with a fishing rod in his hands, certainly free from troubles. My vehicle not only will not sink, but is unlikely to fall through the ice. For this reason I built a Rover, so he brought me not only to the pond, but back to the house.
In truth, this is my second pneumatic. The first was bigger and roomier (description of its design was published in the journal “modelist-Konstruktor” No. 1’2000. — Ed.). He fully satisfied my needs. However, I once again had to come first for a pencil and paper and then for tools.
To design and build a car smaller and simpler forced me to the price of gasoline. Compare: large all-terrain vehicle during a fishing trip burned six or seven liters of fuel, and the small — on the same road — just three liters.
Moreover, the “kid” unsinkable, because afloat keep it sealed housing and wheels-Pneumatics. In water it can move due to rotation of the front leading tires. However, slowly (due to small precipitation along the axis of the wheels), but it is true. Tried to attach to the front wheels at the side of the blade with different configurations however a noticeable speed increase is not found. More efficient propulsion would have required serious complications and worsening of the design.
In the end I decided not to redo anything and was comforted by the fact that the Rover I need more for riding than for swimming.
Since then two years have passed. The Rover operated is quite intense, however, special claims at me to it no machine the only drawback is the lack of reverse, which, however, kompensiruet its good maneuverability.
The mass of the vehicle is approximately 320 kg; max speed 40 km/h; fuel consumption — about 7 liters per 100 kilometers.
This is the design I put up for the readers of the respected journal.
It uses many assemblies from production vehicles, with no alterations.
Attentive eyes will notice in the pictures the lack of any sizes in those places, which shows these units or where valid (at the discretion of the manufacturer) intervals between them. Let those wishing to make a similar design have the opportunity for improvisation, because everyone has their own stock of parts.
So a new Rover was spending less fuel, I did it single and with engine capacity of 12 HP from the cargo scooter. The Rover has a “breaking” that is an articulated two piece frame. By themselves, these parts being separated, to work, of course, can not. However, for the sake of convenience of further description let’s call them the towing vehicle and body functions.
The body of the truck and the body is assembled from veneer sheets with a thickness of 12 mm on the frame of aluminium area cross-section 15x15x2,5 mm. Plywood sheets riveted to the frames using strips of rubberized fabric for sealing.
Hood, top of cab, body cover and all wings of the ATV — made of fiberglass with a thickness of 1 mm. the Top of the cab in the summer is removed, and remains one windshield.
In the body of the truck (mostly in the engine compartment and less in the cab) hosted a transmission frame, welded various steel profiles. In front of the frame, relatively speaking, bumper steel area, to which it is attached (the five M6 bolts) to the front of the machine engine compartment. Between the bumper and channel beam welded shillerovsky same adapter, bent from steel sheet. On the beam there are four platforms to install the motor with the engine. Then the frame goes into the design, already from the welded steel pipe of square section with shelves, on which bolts fixed the two M10 bracket intermediate gear (top) and two bracket differential (bottom). On the same part of the frame there are two more bracket: plate (welded) for the brake master cylinder and spatial (screwed with four bolts M8) — for the steering mechanism of the car “Zaporozhets”.
In addition, the frame is welded to the flattened ends of the two tubular support legs for mounting to the floor of the engine compartment (on the sides) and bracket for mounting to the front wall of the cab (rear). All the fasteners, here bolts M8, two and five respectively.
In addition to the engine, intermediate gear, differential, master cylinder and steering gear, the transmission frame is the tensioning device of the secondary circuit of the transmission. On the frame there is a special platform with two holes.
At the bottom of the front wall of the cabin features a cut-out sizes mm. 270×155 It is made so that when installing the transmission frame in the spatial housing of the tractor the bracket for the steering gear on the end of it and a part of the differential was in the cockpit. Then from the side of the cab cutout was closed convex process lid of galvanized iron. Cover — six screws.
The engine for this vehicle taken from a cargo scooter TMZ-5.403 “Ant” along with its engine frame. In the absence of the factory motor is quite applicable and homemade equivalent It is in this case given his drawing.
On the output shaft worn sprocket (z = 14). Primary chain with a pitch of 12.7 mm is aimed at the intermediate gear with the driven sprocket (z = 42, a motorcycle “Rising”) on the shaft. The backlash of this chain is selected by rotation of the nut of tensioning bolt on the motor frame, causing the engine along with the engine mount shifted forward.
There, on the shaft of the intermediate gear, and is the unit of the two leading stars (z = 11). Secondary circuits with step 15,875 mm, they are connected with a slave sprocket (z = 42, a motorcycle “IZH”), mounted on the box “Zhiguli” of the differential is a planetary gear.
For tensioning the secondary circuit has a device with two asterisks (z = 11), moved a special court transmission of the frame.
Box differential sealed casing. In a box filled with the mixture of grease “ciatim” and transmission oil. The mixture was diluted cream until thick, to preclude leakage across the clearance between the axle shaft and the frame.
In a box of regular differential bearings replaced by a 207-e planted on the cervix through the thin wall transition sleeve. Housing for new bearings is made of flanges, cut from the ends of the old beams of the rear bridge Lada. Bracket transmission frames each fastened with four bolts M10. 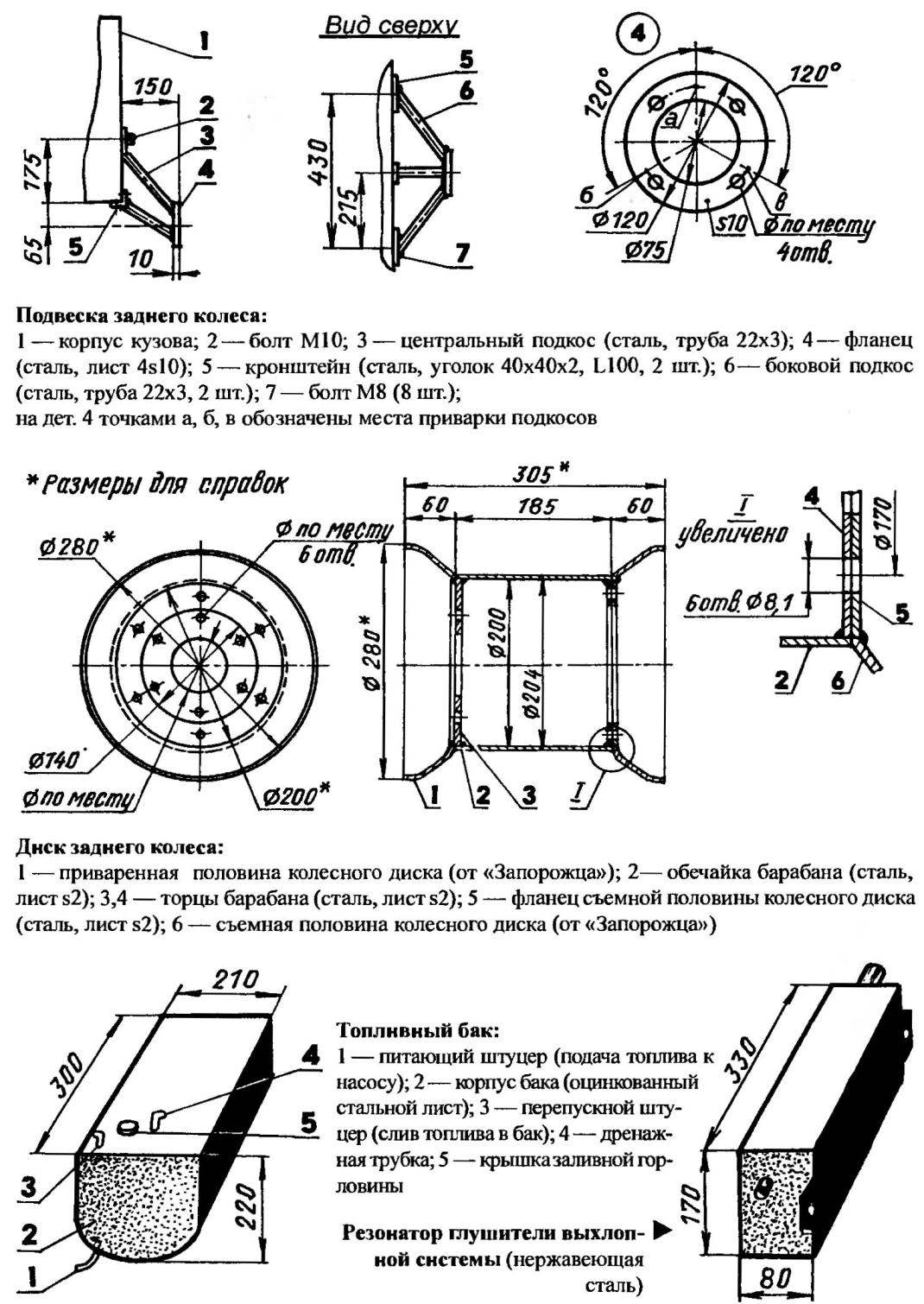 Axle Assembly with the wheels and the brake drums — also “Zhiguli”. Disks modified by Pneumatics, which consist of nested one within the other rubber chambers with dimensions 1065x457x420 mm (GAZ-66 truck or tractor).
Suspension of all four wheels of the vehicle rigid, tubular.
The front suspension consists of a design consisting of a horizontal rod / stockings, reinforced by three struts each.
Stockings homemade, made from steel pipe with a diameter of 50×3 mm To their inner ends welded flat flanges for attachment to the sides of the tractor and to the outer — flanges (bearing), cut from the beam of the rear bridge Lada. These housings are welded braces diameter tubing 22×3 mm.
To the body of the tractor stockings attached flat flanges using gaskets of a rubber sheet with a thickness of 2 mm, and struts — using angle brackets, no shims.
The Rover is equipped with “the Zhiguli” hydraulic brakes only on the front wheels.
Suspension the rear wheels are not stocking and are both composed of three struts converging to a flat welded them to the flanges. In the Central holes of these flanges is inserted and screwed in the standard body bolts with bearing, hub, led by the forks and the brake drums from the rear wheels of the car “Zaporozhets”.
Struts rear suspension attached to the body of their body using angle brackets.
Pneumatic rear wheels consist of nested one within the other rubber chambers with dimensions 710×300 mm (cut in the outer chamber is made by the small diameter of the torus). The valve of the inner chamber placed in the hole with dimensions of 30×10 mm, cut in the drum detachable disk.
From turn on the drives are held every six pneumatic tires of rubber bands. To the edges of the discs bandages attached double hooks of the elastic stylistas wire. Holes for hooks drilled in place.
Rear wheels homemade. Each of them consists of a cylindrical drum, welded from sheet steel, the ends of which are attached half rim “Zaporozhets”: one welding, another six M8 bolts.
To control the Rover used the pedals and the steering gear from “zaporozhtsa”. All these controls are located on a spatial bracket in the cockpit. The bracket is welded from steel square tube and attached to the beams of the transmission frame, the top of his voice in the cockpit through its front panel.
The engine starts with dynastree powered by a battery, although you can use the kick starter. To avoid problems with the start motor even at — 15 °C in pipe in air filter provides a special throttle limiting when you start the access of air to the carburetor. Thus, the fuel mixture is enriched, and the engine starts very easily. Then he continues to work with the ignition from magneto.
Fuel tank capacity of 13 liters home-made, made of galvanized steel sheet. It is located in the engine compartment on the left side (right — battery) and drawn to the front of the cabin two metal retaining strips.
Since the tank is quite low relative to the carburetor, for uninterrupted supply of gasoline used a pump from a boat motor. To the carburetor in case of abnormal pressure increase does not overflow from the float chamber is made of the withdrawal of fuel back to the tank. The outlet fitting is inserted, a bypass nozzle with a calibrated hole with a diameter of 1 mm.
Resonator muffler exhaust system is also homemade. It is made of stainless steel in the form of a rectangular box with dimensions 330x170x80 mm and fixed on the right side of the tractor outside, between the housing and the wheel.
The Rover has an electrical system that includes one directional headlight, direction indicators, position lamps and stop signal.
However, life does not stand still. Better get used to it and once again start to want something new. So I all-terrain vehicle-the”kid” is nothing new. And to ride one fishing was boring. So the time came when I thought about the bench design.
Now I’m building four and already all-wheel drive all-terrain vehicle. Its design will be applied to the engine capacity of 40 HP from “Zaporozhets”, “transfer case” lock independent suspension all four “wazowski” wheels and wheel gearboxes.
The approximate dimensions of the Rover 4000x1800x1600 mm. Maximum speed of 70 km/h.
Inside the car, if you remove the rear seats, can sleep in a bed two people.
B. RYZHOV, the city of Sharypovo, Krasnoyarsk Krai