If “Attesi-TX” able to enchant you just the same as at the time, and me, I think I may be able to help you make this very simple, compact and as a result, cheap and affordable car. “Attesi-TX” is a double two-door car with the engine of the T-200M working volume of 200 cm3 and a power of about 14 BHP Machine four-wheel, but the rear wheels close together and the track is much narrower than the front. This is done in order to be able to get rid of the differential, the use of which significantly increases the cost and weight machine.

Little micro-car — frame construction; its frame is a space truss made from tubular elements, and the body — frame construction, with sheathing of plywood, covered with a layer of fiberglass on epoxy glue.
The engine is located in the rear and sends torque to the drive wheels through a two-stage chain transmission. Front axle — motorized FDD (or beyond), back — homemade, trailing arms and shock absorbers from the medium (or heavy) motorcycle.
If your future machine will be similar in ideology to “Atasi-TX”, then you will need the following: for frame — seamless steel tube diameter 40X2. 5 mm in diameter 36X2,5 mm, 30X diameter 2.5 mm, diameter 22 X 2.5 mm sheet steel 2.5 mm thick, 4 mm and 5 mm; rectangular tube ZB x 60 X ZMM; woodwork section 30X 30 mm, 25 X 50 mm 25 X 40 mm 30 X 50 mm, 30X60 mm; plywood or hardboard thickness 3…5 mm fiberglass.
Windshield is best used from the back door of the car VAZ-2108 and VAZ-2109: their configuration fits in the dimensions of “Attesa-TX”. Well, the back and side it is possible to cut organic glass of thickness 3…4 mm. With careful treatment and regular processing of organic glass cosmetics long lasting transparency.
From ready-made components and assemblies will need the following: engine type T-200M (scooter Tulitsa or motor scooter cargo “the Ant” TG-200), the front axle of the sidecar, rack and pinion steering mechanism with steering wheel of the sidecar FDD, a pair of motorized wheels (front axle) and a pair of wheels of the scooter with the tire of the sidecar (for rear axle); two shock absorber for the suspension of the rear axle (from motorcycle Dnepr, Ural or IZH); aluminum 10-liter Jerry can for fuel tank… and, of course, hundreds of all sorts of things that probably need you in the process of manufacture and which is almost impossible to mention in a journal publication.
FIRST OF ALL YOU NEED TO PREPARE PLASMA. For this you need to glue a few sheets of thick drawing paper and pull the paper flag on a shield, knocked together from plywood sheets. Strongly recommend to prepare accurately drawn on thick paper or cardboard silhouettes finished parts, components and assemblies, as well as articulated silhouette of a driver when rendering the frames this will speed up the design process.
Plaza drawing start with the front axle. The tradition of autocostruzione require to combine front axle machines with the intersection of the lines of the coordinate grid as a reference point. Accept and we make it a rule.
Suggest lofting on one sheet to draw as the loft frame, and 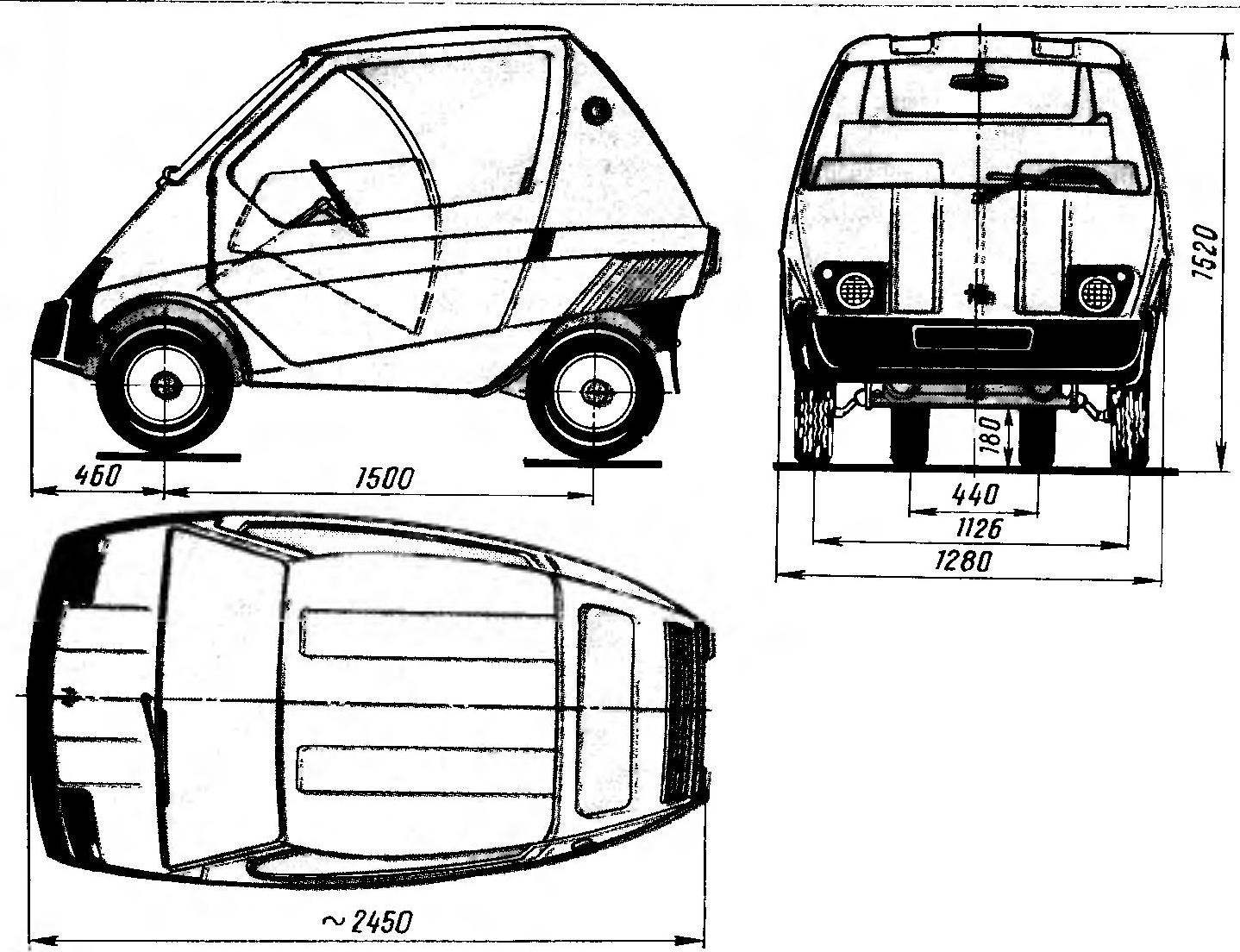 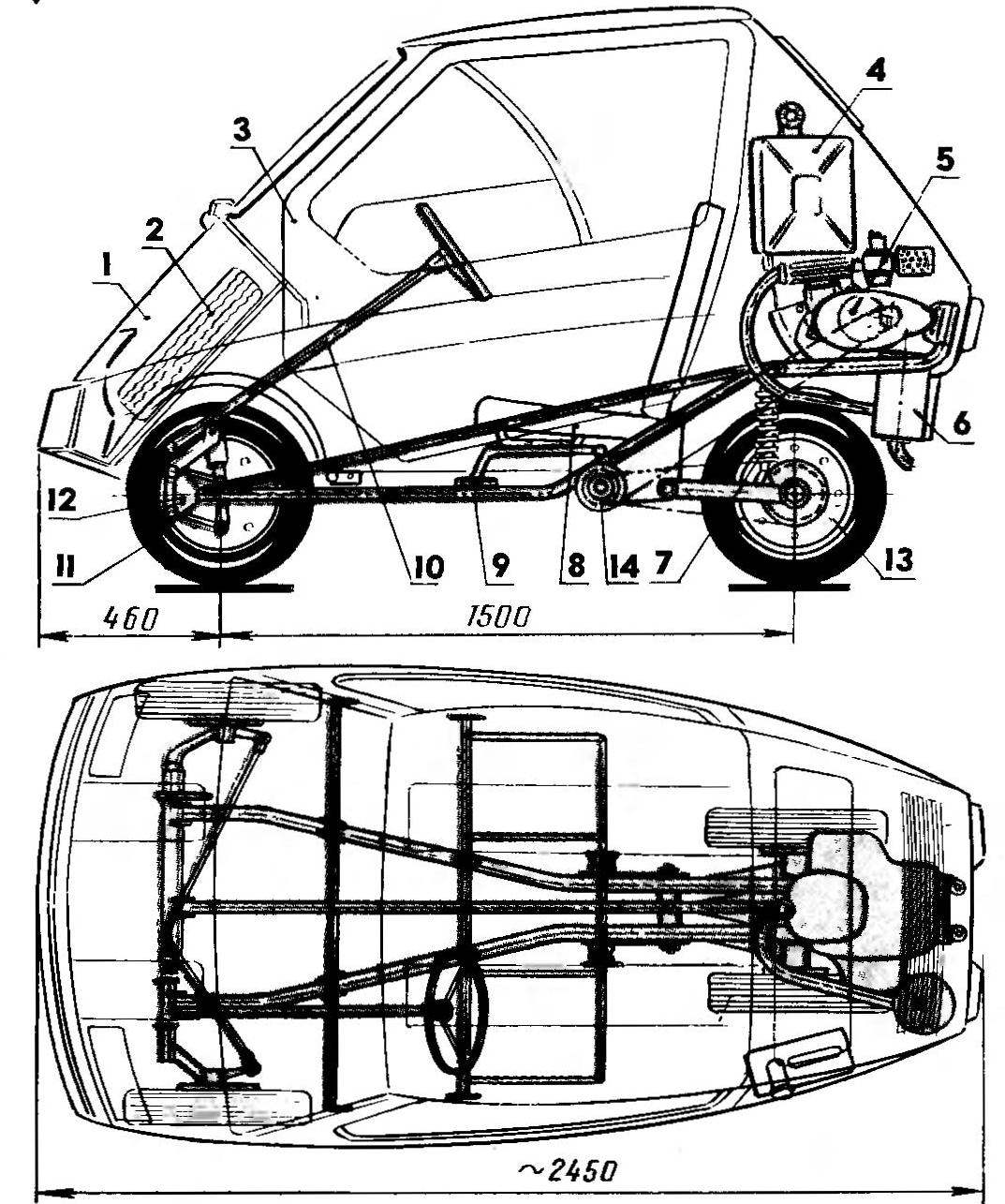 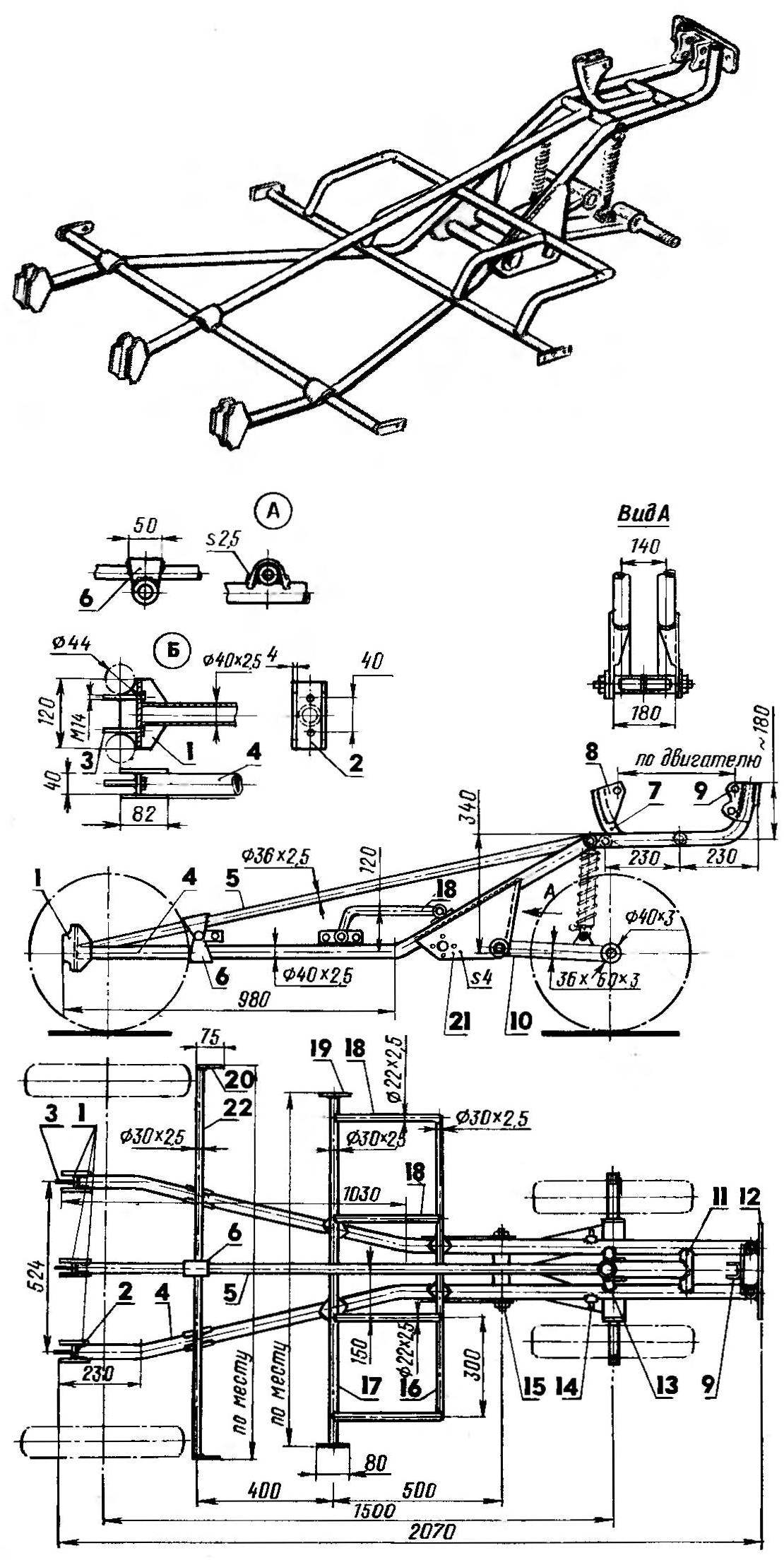 R and S. 3. The frame of the micro-car, only with levers of the rear suspension:
1 – cheek to the docking station frame and front axle, 2 — cross member to the docking station, the 3 — M14 bolts (welded to the crossmember), 4 — side-spar, 5 — the Central spar, 6 ferruled docking station, 7 — front tube sub-frame, 8 — cheek motor mounts, 9 — bracket rear mount engine, 10 — arm suspension for the rear wheels 11, 13 — Poperechny sub-frame, 12 — bracket rear body mounting on the frame 14, the upper bracket of the shock absorber of the suspension, 15 — the axis of the control arm for the rear wheels 16, 17 — cross brace 18 — support seats, 19 — middle bracket body mounting on the frame 20 to the front bracket body mounting on the frame. 21 — cheek block box intermediate of the sprocket and hinge mount levers of the rear wheels, 22 — cross front. And — strengthening hubs with hardware, B — design of the docking station frame and front axle. 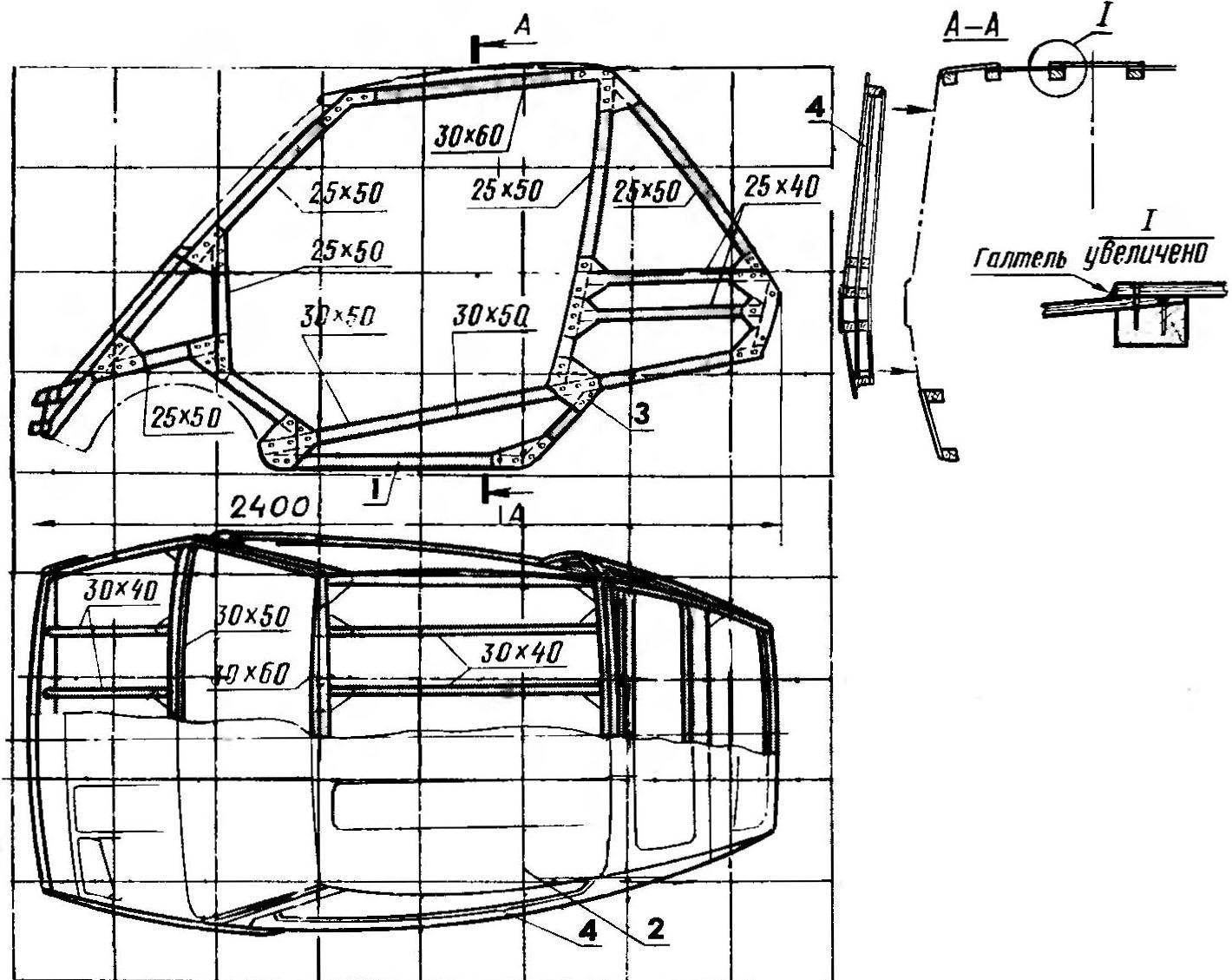 R and S. 4. The body of microwaveable. On the main view of the door and the sheathing body is conventionally not shown. The planned projection of the right door is not shown.