To fly like a bird, the strength of your muscles, very tempting; dreamed about it many of our ancestors. Already in the XV century, when on flights in the modern sense could not even dream of such a machine designed by Leonardo da Vinci. Unfortunately, he was not able to implement their ideas. And only today, after five centuries, people have achieved the first real success.
To promote the efforts of designers in the creation of such aircraft British millionaire Henry Kremer in 1959, established the award in 5 thousand pounds sterling to the first person who flies using only his own muscle strength, the distance of the eight length of one mile (1609 m). An additional condition was that the scoring flight must begin and end at a height of 10 feet (3.05 m). To fly under such conditions could not be anyone, and in 1973, the award was increased to 50 thousand pounds.
23 August 1977 the official flight occurred at the airport in California. 7 hours and 30 minutes, when the wind has abated, the pilot Brian Allen started to perform the flight. Device called the “gossamer Condor” slowly took off. Crediting the flight lasted 6 min 22.5 s, the Entire flight lasted 1 min 5 sec longer: the time needed for climb and landing.
The first official but unsuccessful attempts to pass this distance in England was made on 9 November 1961 at the machine, “Sumpak”. A week later was an attempt on a different device “Paffin I”. In late 1962, Derek Piggott overcame “Campeche” 20 meters and made a u-turn at 80 degrees. It should be noted that the turns were the most challenging elements of flight such devices. Later the British set up devices “Dumbo” scale of 36.6 m, “Jupiter” and double “Token”.
These experiments gave the impetus to the works of other enthusiasts of non-motorized flight. In Austria, Jozef Mallya flew in 1967 on a relatively small apparatus 70 m In Japan to address these issues Professor Kimura. Under his leadership, has created ten types of aircraft. The first was “Lynette I”. On it in March of 1966 he made a 15-meter flight. The most successful was type “stork”, which in 1976 flew in a straight line 2094 m. In the United States until 1976 was not done in this direction nothing serious, except for short spikes in the machine “Olympian”.
A good musolyamov technical data given in the table. You can see that the designer of the device “gossamer Condor” chose a different path than its predecessors.
Main technical data musolyamov

Aviation biography of Dr Paul Maccready is very rich. Champion and world record holder in gliding, he has a lot of hang-gliding and even fond of indoor flying models. Obviously, the last two types, sport has helped him in designing an aircraft, between room models and musculokeletal P. Maccready a lot in common. Room models it is very light with a fairly large size.
To create muscularity P. Maccready started in 1976. When solving aerodynamic issues he collaborated with Professor Lacsamana, which helped to calculate the profile of the wing and the propeller blade. In the future, he helped Lambi, known gliders, known for building copies of old airplane Wright brothers (1903) and flights on it. In September 1976 the first “gossamer gull” was ready. Its wingspan was $ 24.7 m and a weight of 22.7 kg, 26 Dec on it. flew 17-year-old son of the designer of porter — he stayed in the air for 40 s.
In February 1977 in the creative team took 24-year-old Brian Allen, who was involved in Cycling and hang gliding. Ergonomic measurements proved that a trained rider can develop power up to 1.1 kW, reducing it from 60 down to 0.52 kW. Allen was able for 7 min (the duration of the flight), to develop power of 0.33 kW.
The new device is “gossamer Condor” was required for level flight only 0,26 kW. This meant that the pilot will not have to pedal with all the force during the whole flight, it can save you power for making turns (turns are associated with loss of height due to the huge wingspan). 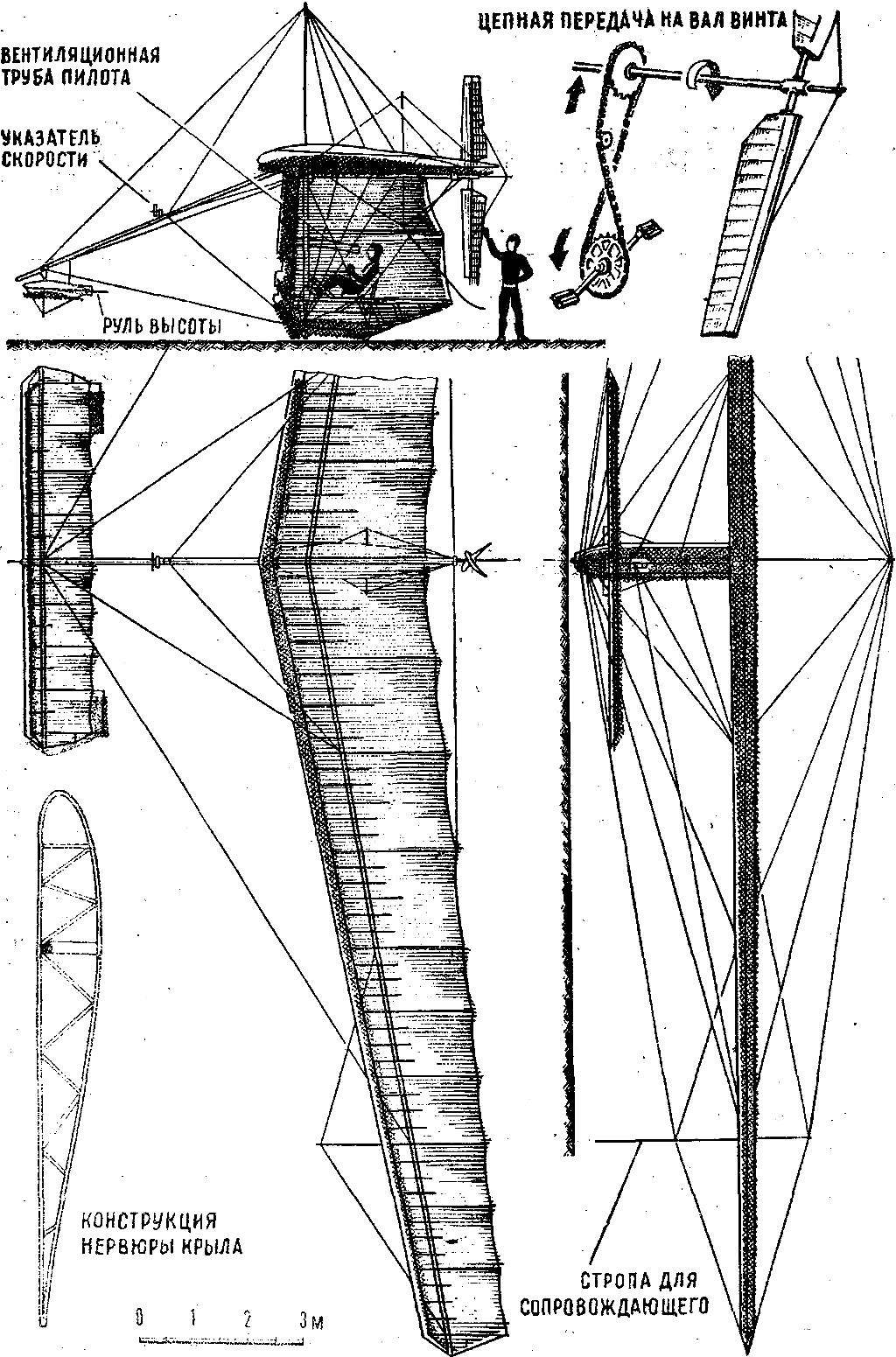 Muscolare “gossamer Condor”.
The construction of the “gossamer Condor” lasted two months. The flight speed of the apparatus is small — only 18 to 20 km/h, so it can only fly with very little wind, just above the ground, using the effect ecologicheskogo flight.
By this time G. Kremer established a prize to the first Englishman, who will be able to repeat the achievement of the Americans, and a reward of 100 thousand pounds to the first person who flies on muscularity across the channel.
Technical details
“Gossamer Condor” is a single verneplan type “duck” (stabilizer ahead of the wings). Powerful keel is also the cockpit. The drive mechanism is located in one plane with the seat. He rotates the pusher propeller Ø 3650 mm. Management with respect to the transverse axis of the Elevator on the stabilizer. Turns are made by tilting the latter, a control relative to the longitudinal axis deflection of the wingtips (similar to ailerons) using two levers.
Wing folding. The main spar is a dural tube Ø 50,8 mm with variable wall thickness of 0.56 to 0.33 mm. the Spar is located on the lower side of the profile. Ribs of duralumin tubes of Ø 6 mm. the balsa Polonaruwa. The front part of the wing covered in corrugated cardboard, the rest is transparent polyester (thickness 0.005 mm top, bottom 0.0025 mm). The whole structure rascalin steel wire Ø 0,6—0,9 mm. 1
The design of the stabilizer is similar, although its front part is made of foam polystyrene. The stabilizer attaches to the dural tube Ø 50,8 mm.
The front part of the keel — foamed polystyrene. To land under it has two wheels Ø 125 mm. wing Span 29.3 m, the device length is 9.14 m, height of 5.48 m, the area of the stabilizer of 8.92 m2, total area of 75.8 per m2. The frequency of rotation of the propeller 115-120 rpm.
A. LAPP