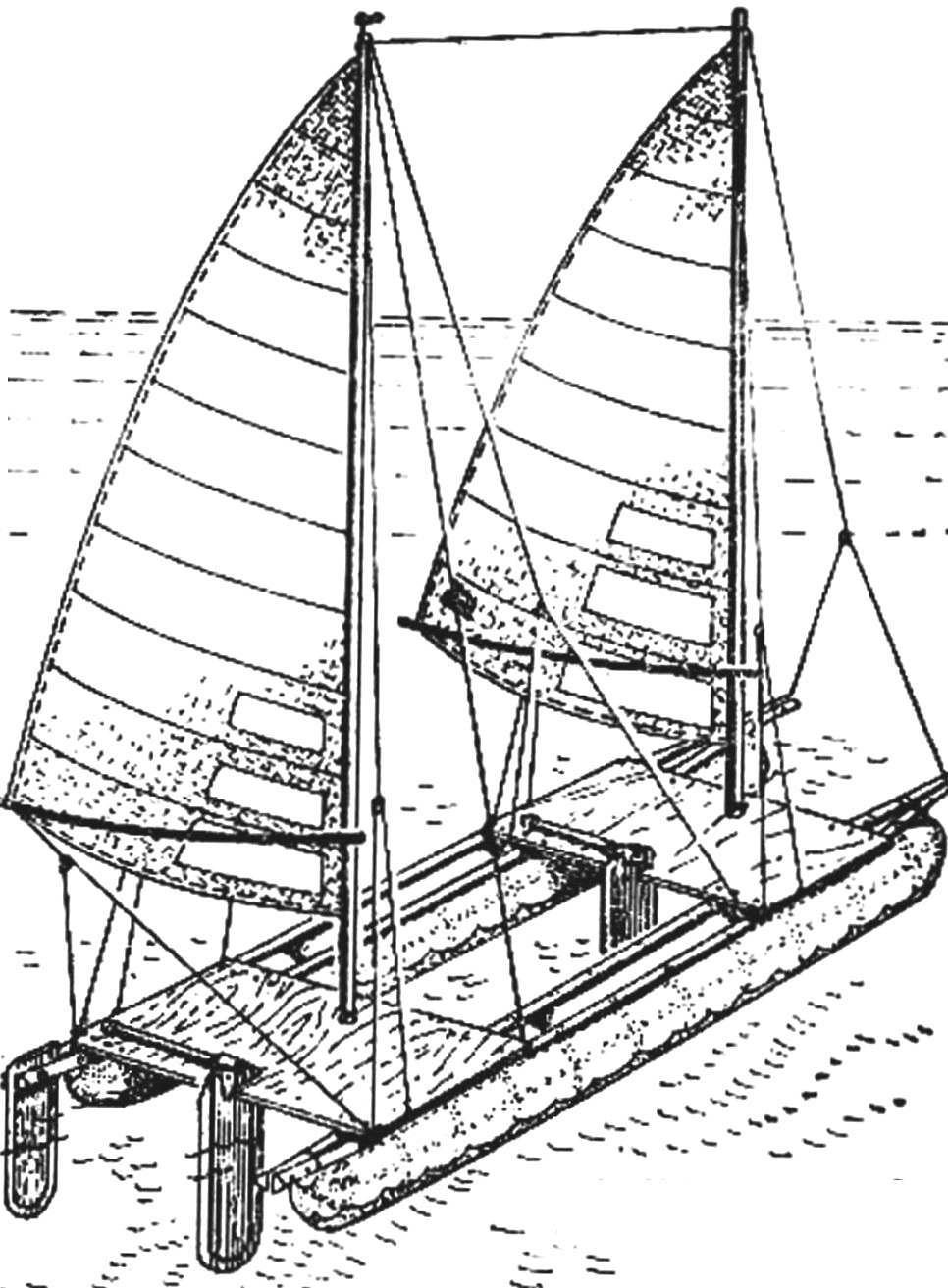 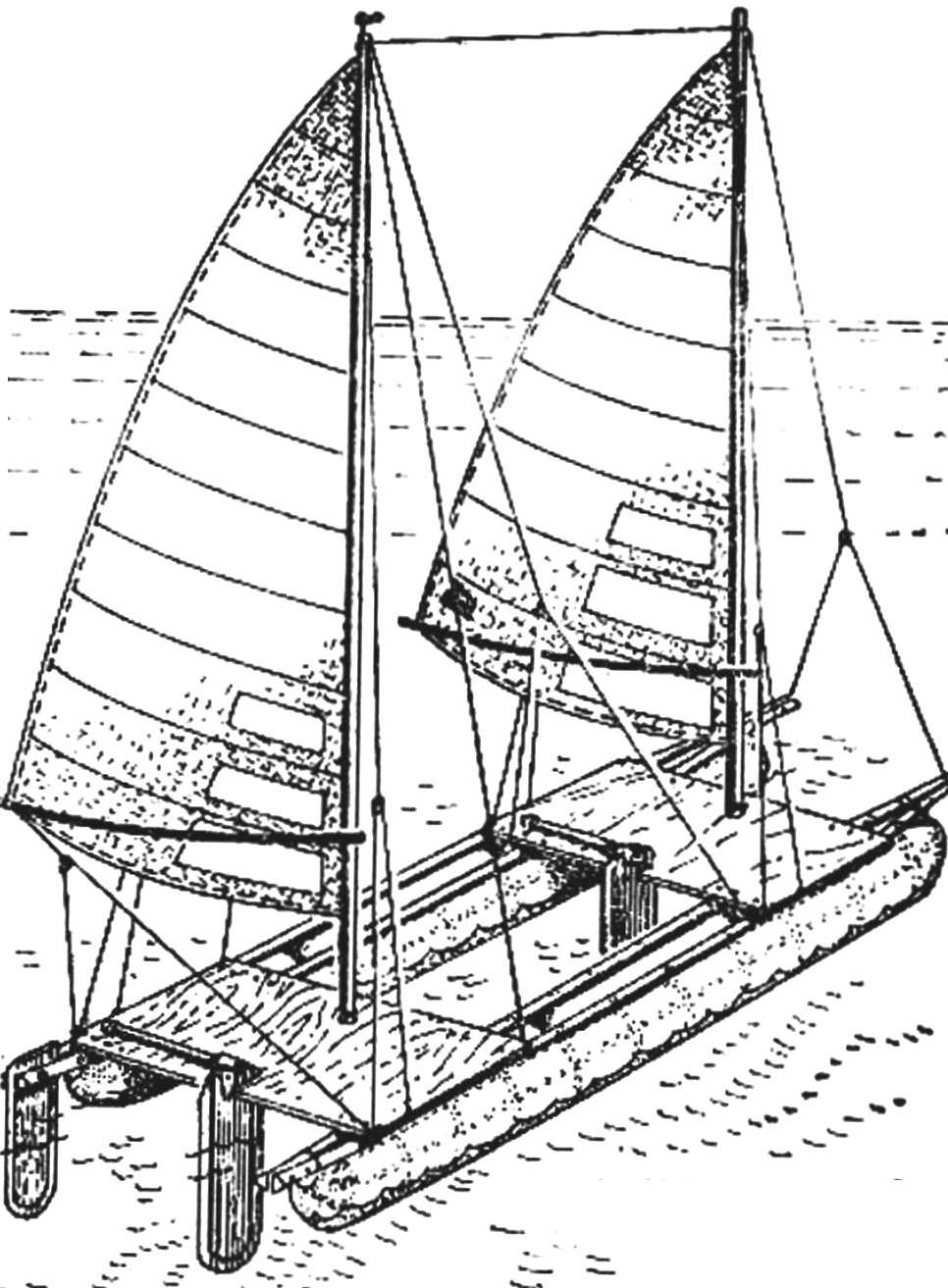 How easy and looks elegant sailboats on the water! Racing “the Flying Dutchman” and “Dragons,” recreational tourist “Gonna” and “Nephritis”. And here on the coast they lost these attractive qualities: even the rapid windsurfer — the smallest of them turns into a heavy Board, which is difficult to carry, inconvenient to carry, and most importantly, do not know where to store after the summer season. As for their construction, even the easiest surfer to make yourself is not everyone’s strength.

And I wanted to make a sailboat that would be devoid of such faults. Suddenly, all the search schemes of the vessel, its design decisions, even the choice of materials ended in the… shop toys “the Kid”, where on the counter lay baby inflatable “logs” for swimming. Dimensions: length 1.2 m, Ø 0.25 m and a weight of only 0.8 kg. Then it was just. From the beginning of taking the cloth 800×3700 mm marked out as shown in figure 1, has stitched on the sewing machine around the edges — it has the appropriate “pockets”. In two long inserted dural tube Ø35 mm and length of 4 m, and slipped in a short braid. Put cloth in the middle of the three “logs”, one after another in a line, wrapped them in cloth, bolts M6 connected between the ends of the pipes and then tightened the braid at the ends. Turned out the float: an inflatable, collapsible, with a shell made from ordinary plastic and frame from stringers-pipe, weighing about 5 kg, and the payload 90.
Two of these float formed body of the surfer and catamaran. Put them together rectangular deck (800X1000 mm) bakelizirovannoj plywood 5 mm thick, and fastened it to the stringers with clamps to the bolt M4. Sailing vooruzenie found normal for windsurfers — with an area of 5 m2. Back on the deck on a section of pipe planted pivoting centerboard size 15x300x800 mm, drank for a narrow groove. Weight of assembled housing accounted for 13 kg. But later I reduced it by 2-3 kg due to the replacement of bakelite plywood for aviation, 10 mm thick.
Surfer and catamaran has a large ‘capacity, because it is made up of six “logs”, so it was possible to install it on two decks and two masts with sails too, 5 m2 — it has a double option. The design was not introduced significant changes. Only deck steel square — 1000x X1000 mm, each received a centerboard. In addition, I decided in a single catamaran to reduce the volume of one of the buildings, wrapped in oilcloth, only one “log”. So there was a version of the surfer”Proa” with outrigger. On this deck is on the main float, but offset inward to maintain balance. Buildings are connected dural tube Ø22 and a length of 1100 mm, with a support made of aluminum strips with a thickness of 4 mm. Stringers of two steel outrigger ski poles, somewhat curved in its profile (Ø18 mm). A significant innovation of the option: ski placed under the outrigger and performing the role of its flat bottom. It is made of plywood, has dimensions 300×1200 mm, the front part is folded up and pulled in front to the stringers. Added another centerboard. 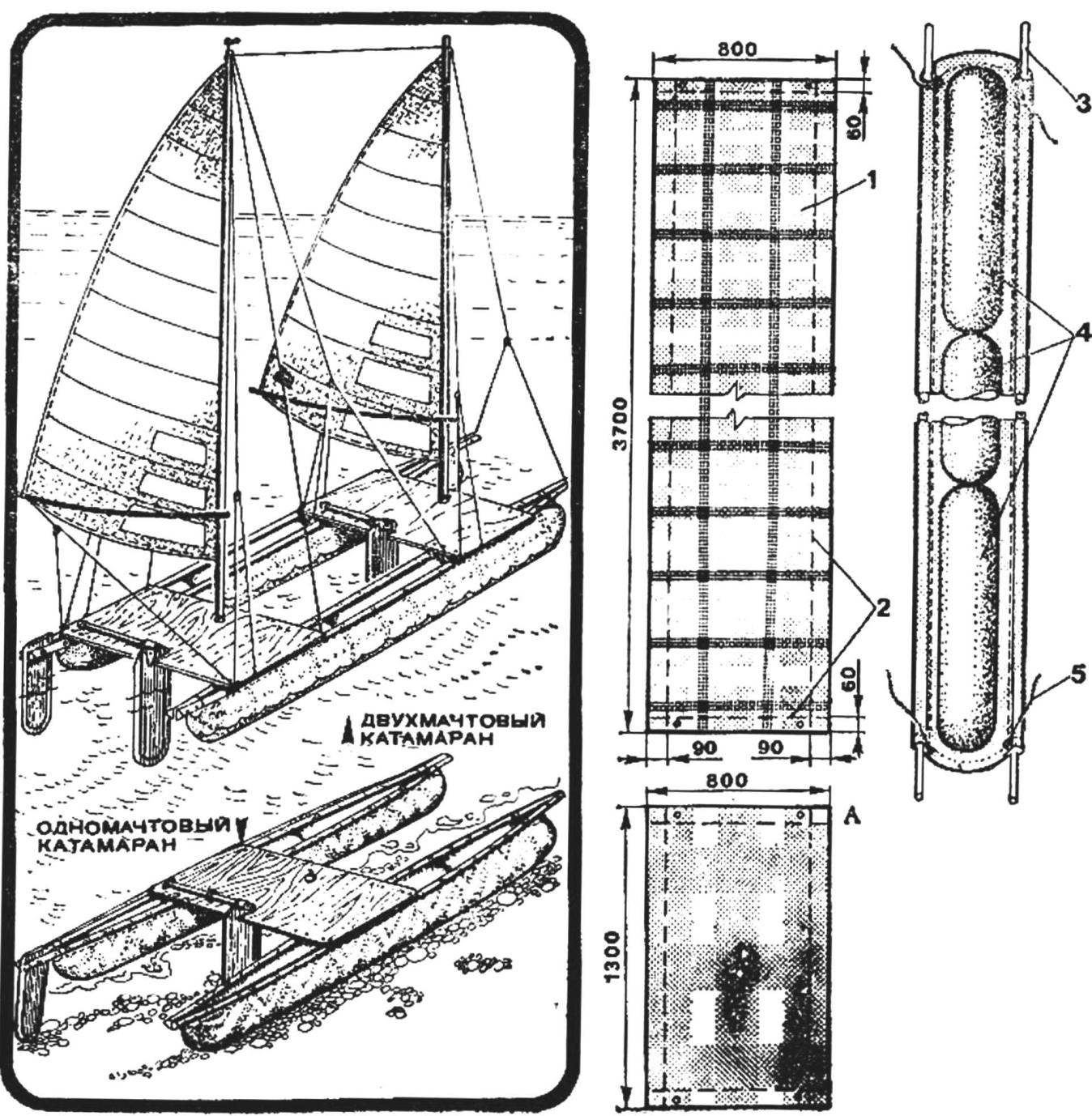 Fig. 1. Harvesting the inflatable body:
1 — cloth for the main float. 2 — seams pockets for the frame tubes and tsyuy, 3 — pipe-stringer, 4 — air springs, 5 — braid to tighten the cloth. A — panel auxiliary float.
Finally trimaran. It can be assembled according to the same scheme “Proa”, but with outriggers on both sides. The connection of the floats in one case running it through the cross beam. All attachment to the clamps.
Thus, based on the module “log”, it is possible to build several variants of a sailboat.
The design was tested in different water bodies of the Leningrad region: on small and large lakes, lake Ladoga and in the Gulf when winds are from one to five and often in heavy seas. It turned out that “Proa” the fast and easy on-the-go vessel, and its construction is cheaper than others, although it is slightly more complicated. However, for self-management requires certain skills. It is necessary to learn to balance so that it’s possible to unload the outrigger until the exit of the water, although he glissirovat on your plywood bottom in almost all courses and at all speeds. Installed the original float displacement type formed on-the-go high breaker and markedly inhibited the sailboat. The outrigger was better to put so that his nose was slightly elevated above the surface of the water; if the waters cool wave, try to increase its angle of ascent.
Trimaran is more stable, and it feel safer, particularly in small, closed water bodies. But the excitement turns to do the harder than the “Proa”. The fact that the floats are above the water surface, when the change of the gals, one of them almost always picked up by the wave and usually buries itself in her. Lower their arrangement improves the stability, but increases their resistance and therefore reduces speed. 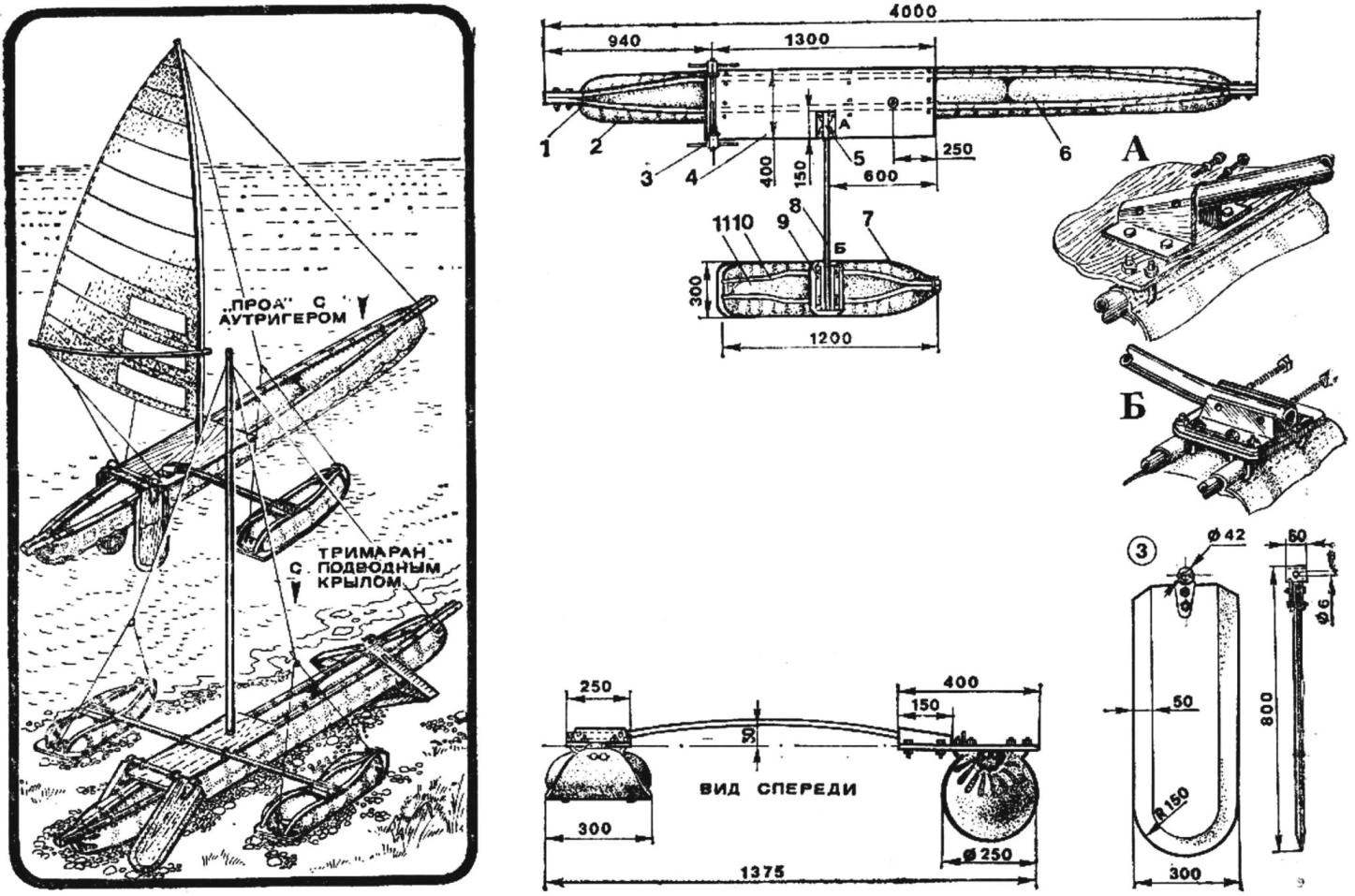 Fig. 2. A surfer with a Central inflatable hull and auxiliary float:
1, 10 — tube-stringer, 2 — oilskin pouch, 3 — swiercz, 4 — deck, 5 — clamp of the outrigger beams, 6, 11 — pneumocylinders, 7 — the case of the outrigger, 8 — beam, 9 — bearing platform beams. In the front view of additional parts is not shown, A and B, the fastening elements of the floats.
Catamaran is easiest to manufacture, it is resistant, comes in any wave, agile, rapidly moves on to another tack and turns. Finally, it is reliable, as it has a large reserve of buoyancy. Its only drawback — a relatively low speed.
It is worth to mention another experiment: on the trimaran and the catamaran was tested underwater diamond-shaped wings with a span of Enola 1300 mm each. The first was delivered one wing, the other just three, two under the deck and the third in the bow. With their help, sailboats markedly increased speed.
I confess all my sympathies belong to the “Proa”. As it is, can any other, I find it easier just managed to get away from the windsurfers.
M. YAKOVLEV, Leningrad