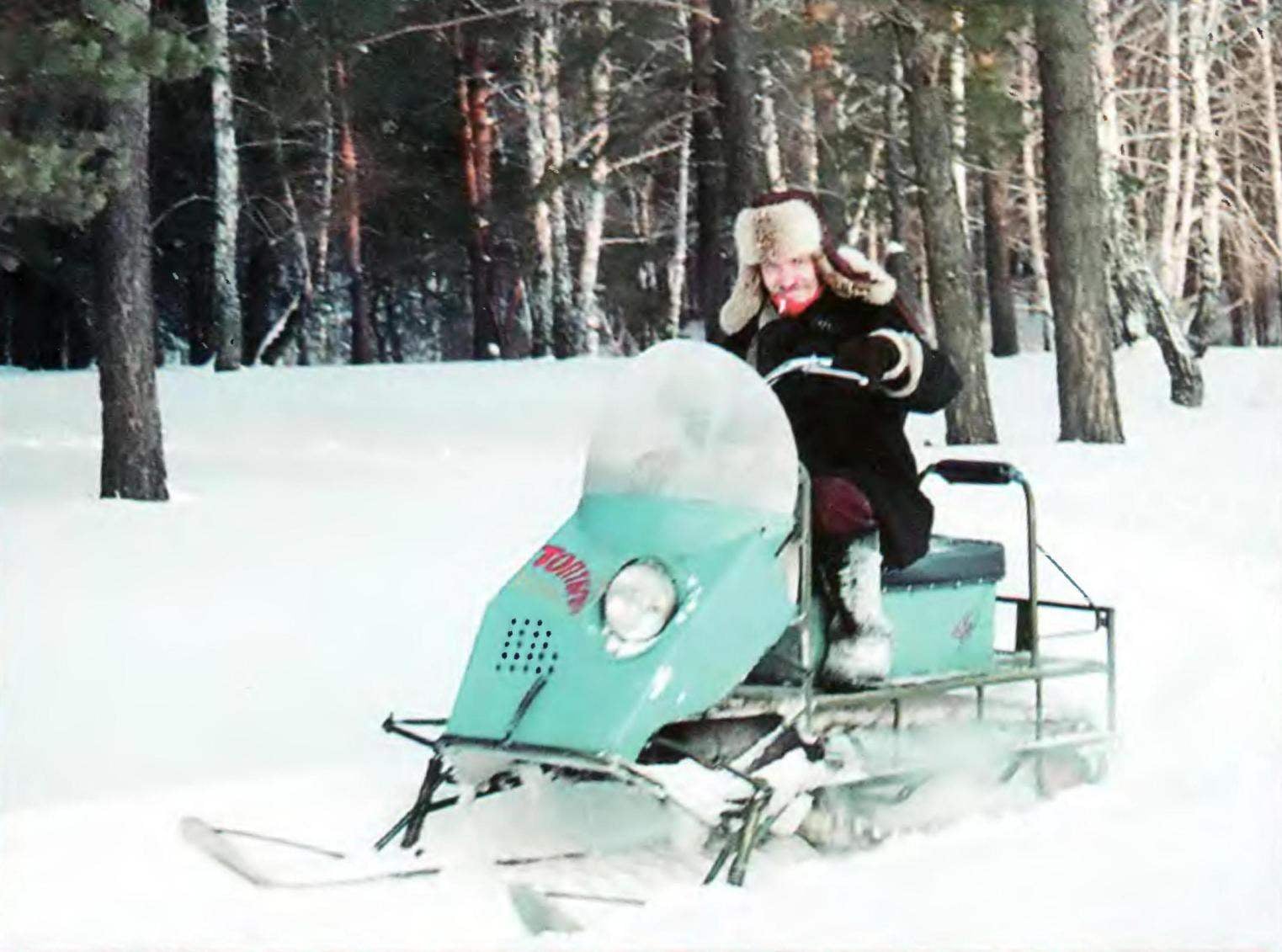 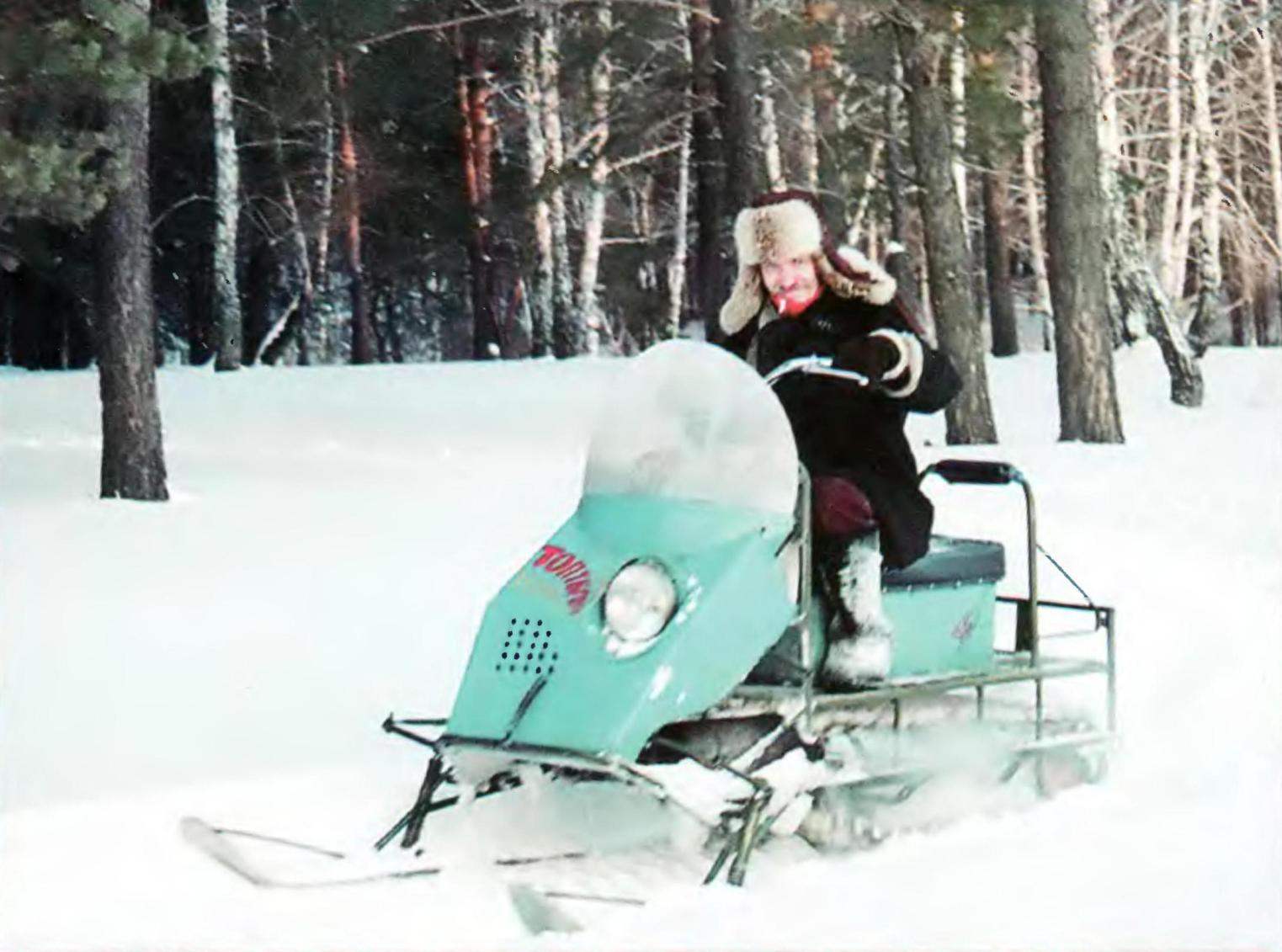 Snowmobile-stick “Bruins” with the engine IZH-P3. So, from the author of the popular among designers and fans of the series homemade snowmobile of the type of “Idea” — manufacturer’s description the latest and most powerful “stick insects” (snowmobile with caterpillar tracks made of wooden bars), nicknamed “the Bruins”.

Design. “Bruins” is a truck mount, double snowmobile with a crawler gear and asymmetrically located an engine from a motorcycle “IZH-Planeta-3”.
The engine is offset to the right from the axis of symmetry in front of the driver. With this arrangement, without intermediate shaft. However, in the transmission had an output sprocket output shaft to move out on the extension sleeve. Its length is selected such that the drive chain was held between the frame spar and a caterpillar. Deliberately do not give exact dimensions of the sleeve length — they depend on the location of the engine on the frame. The layout allowed for no alterations and adaptations to use the standard foot shift, driving it now with the right foot. And for the convenience of starting the engine mounted additional lever on the rack frame, and connected him a thrust with the standard starting lever of the engine.
The frame of the snowmobile made from water pipes and parts. It is welded with the help of household welding machine ADZ-150 electrodes SSSI. Pipe bending is done manually — a simple sleeve with a tube Bender with a long handle. Steering knuckles, mounting plate -reference of the ski and the ski support, are welded in place during Assembly on the slipway. The frame feature that it is trapezoidal (the distance between the two spars in front more than rear). But this is more a design decision than a design.
The arc’s reference and support ski I recommend to weld to the frame after installing it the driving and driven shafts and pre-tension track.
Caterpillar mover — such as those that were already on the previous niconico shafts kompensiruet use self-aligning bearings.
Leading gears are cut with a sharp knife from a sheet of rubber or the sidewall of the tire of a tractor K700, you only need to water the cutting place for lubrication. Accurate method of cutting is that first made the metal pattern sprocket with the mounting holes. Then on the axle is worn, the rubber blank with a template, is attracted by regular bolts and cut.
As already noted, the main difference between the mounting tracks on the frame “Bruins” from the old snowmobiles that the location of the drive shaft is much higher than the tension axis (for its fastening to the frame is welded, even an overlay). This design concept significantly increased the permeability of the snowmobile. 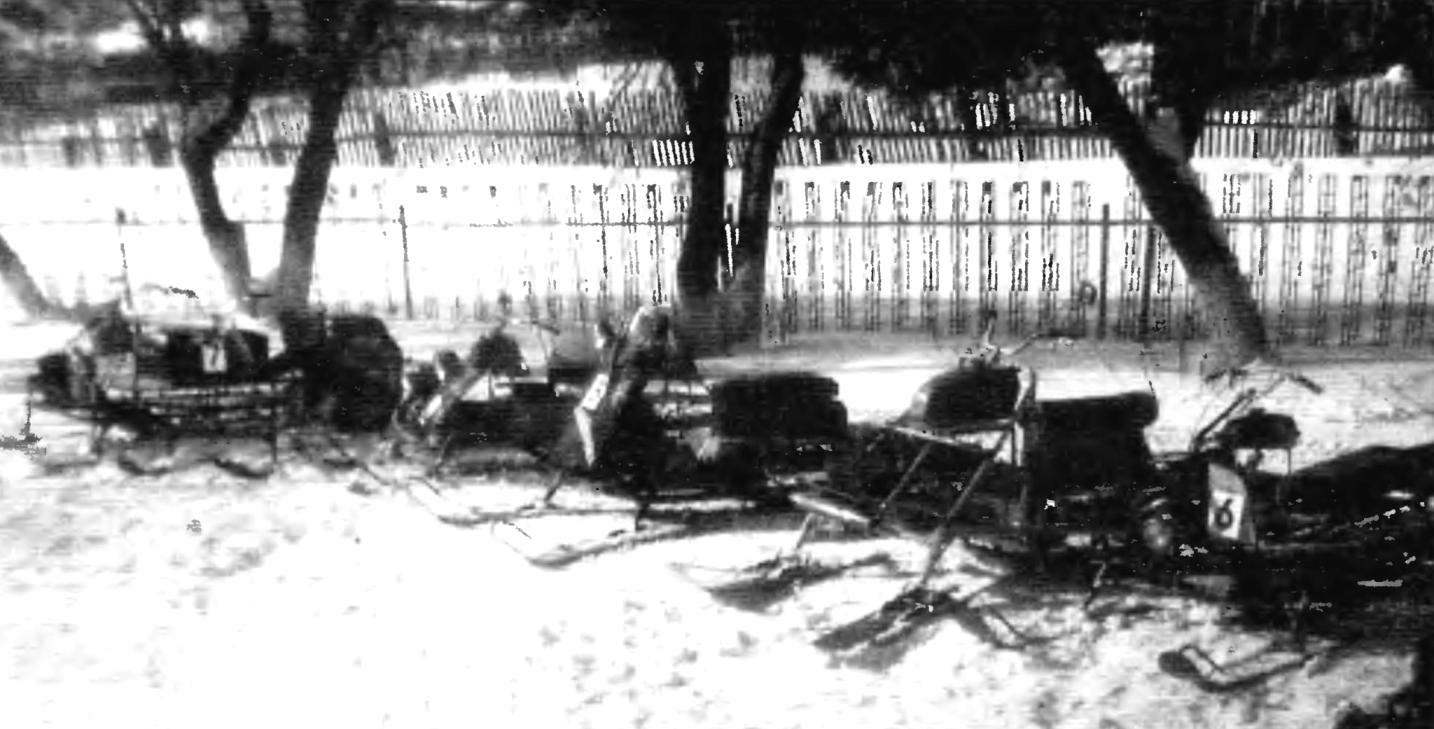 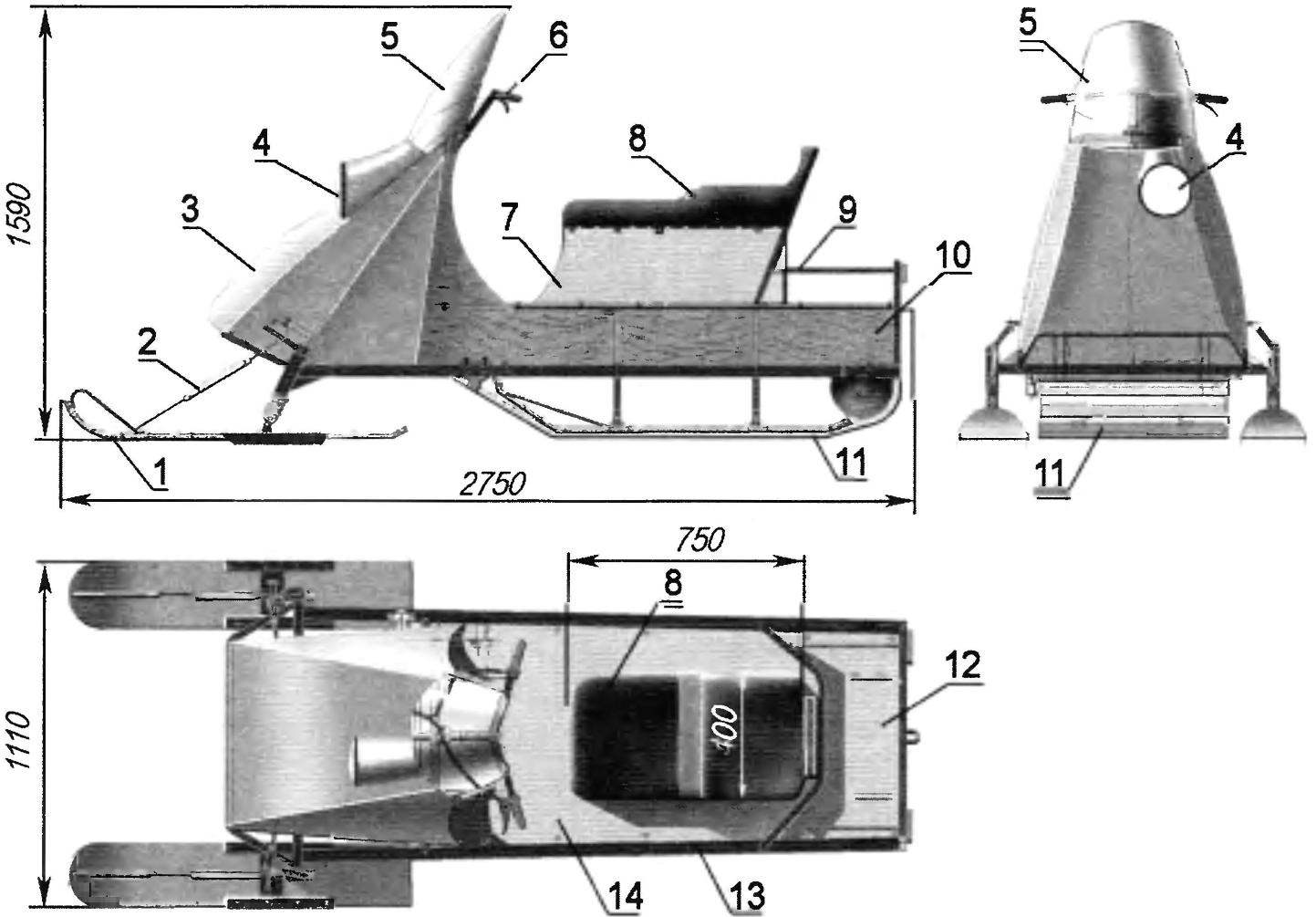 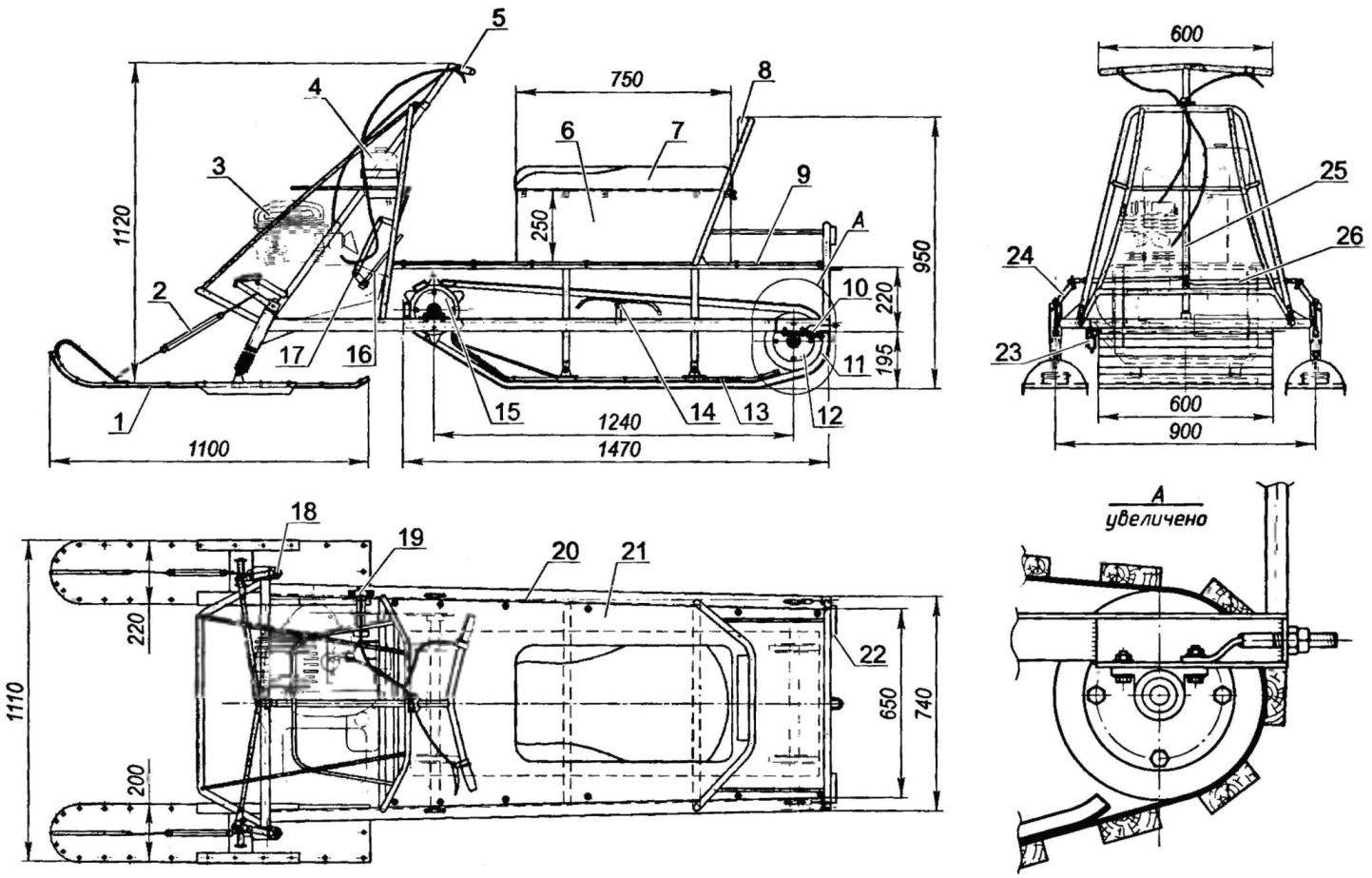 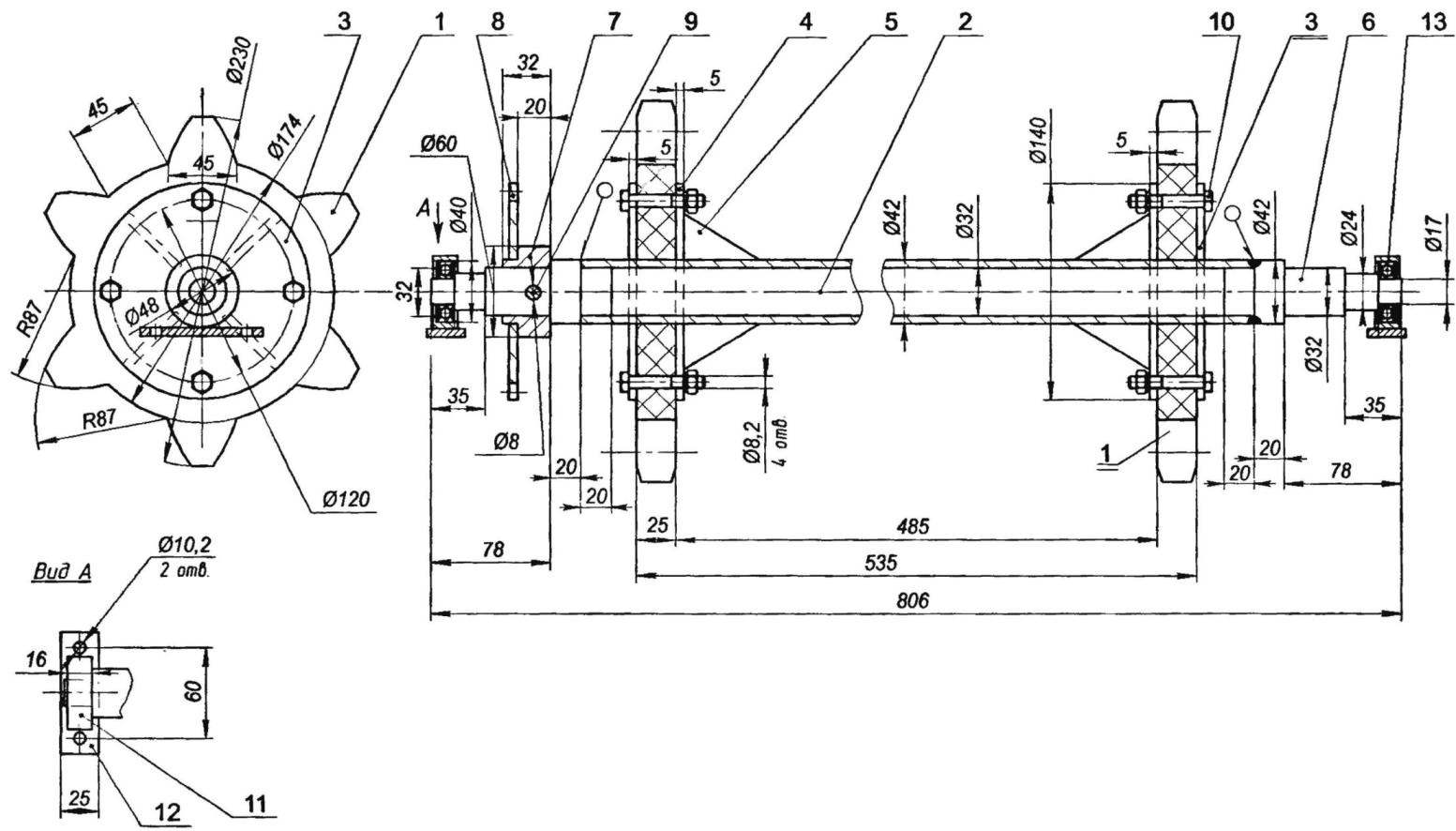 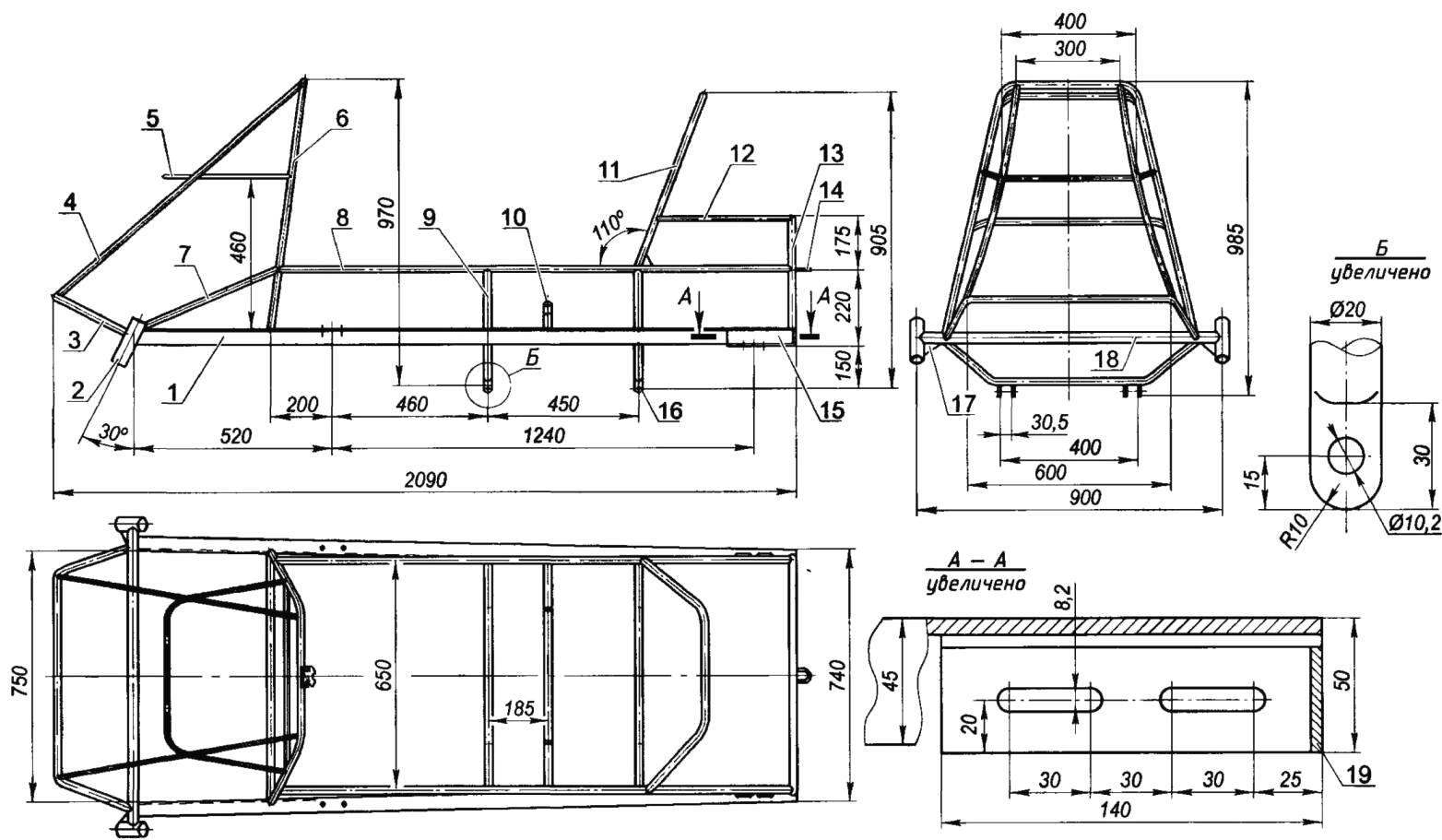 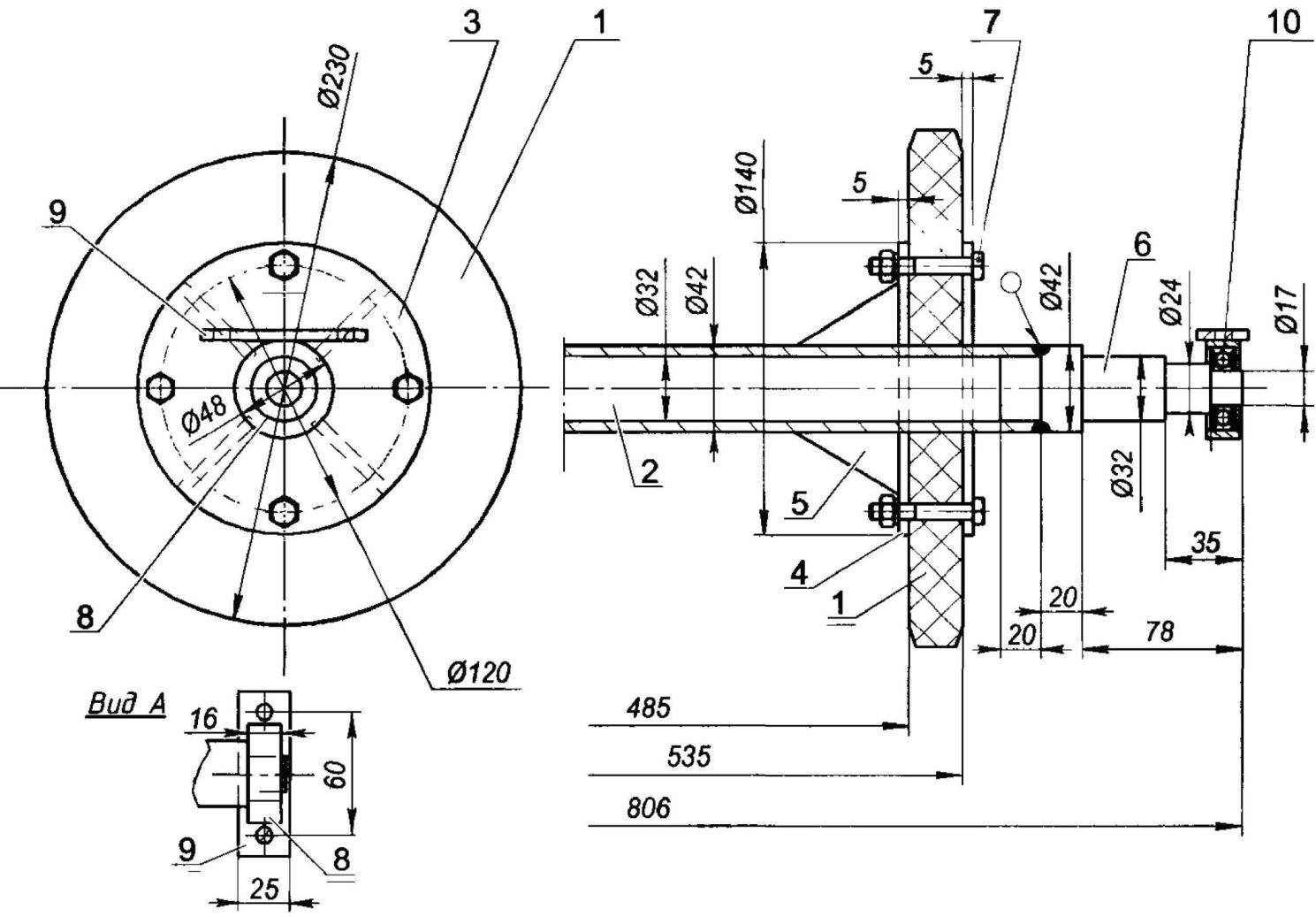 The node is the stretch axis:
1 compactor (rubber, sheet s25, 2 PCs); 2—axis (pipe Ø42×32); 3—clamping the drive roller (steel, sheet s5. 2); 4—cheek roller (steel, sheet s5. 2); 5—solitaire (steel, sheet s5, 8); 6 — shaft tip (steel, Ø42,2); 7—connecting with a cheek rink and disc (М8х46 bolt with washer and nut, 8 sets); 8—the bearing housing (steel, Ø48, 2 pieces); 9—the base of the bearing housing (steel, sheet s8,2 PCs) 10—self-aligning ball bearing 80203 (2 PCs.)
For mounting the crawler block on the frame in the first place are laid out and drilled for mounting bolts to bearing housing with the drive shaft. Then on the actual size of the track is defined by the rear tension axis, and shelf linings are cut oblong holes (slots) for tension-easing caterpillars by moving the bearing housings.
The tension of the tracks is produced by moving the bearing housings (when loosening their mounting bolts) driven shaft (or rather the rear axle) screw tensioners in the oblong holes (slots) in the plate of the frame spar.
Here I want to note that the bearing housings of the drive shaft and idler axis are mounted on the longitudinal frame in different levels and “mirroring”: the first two are installed on top of horizontal shelf area, and the second is attached to a horizontal shelf lining the bottom. This provided the desired excess of the position of the drive shaft with drive sprockets relative to the tension axis with the rollers.
Reference ski. She also has several functions: it distributes the load to the entire area of contact with the snow (like a truck, and directly in between them); is a guide for the track and the sliding surface for trucks.
Support ski made of ordinary birch plywood 10 mm thick, soaked in hot natural linseed oil. It is possible to make the reference ski from sheet metal and alapati on the perimeter of the plastic strips 10 mm thick.
An excellent material for lining the lower surface of the reference skis is sheet polyethylene. Its use provides a low friction and, as consequence, — low wear of the Shoe.
Ski reference:
1—snake (plywood s10) 2 sole (polyethylene sheet s5); 3 — support bracket (steel, sheet s5, 4x) 4 — bushing (from the car “Oka, 4x); 5—strut support bracket (steel, sheet s5, 8 items); 6 — brace (steel, pipe Ø12, 2); 7 — rivet (aluminum Ø3); 8—washer (steel set). 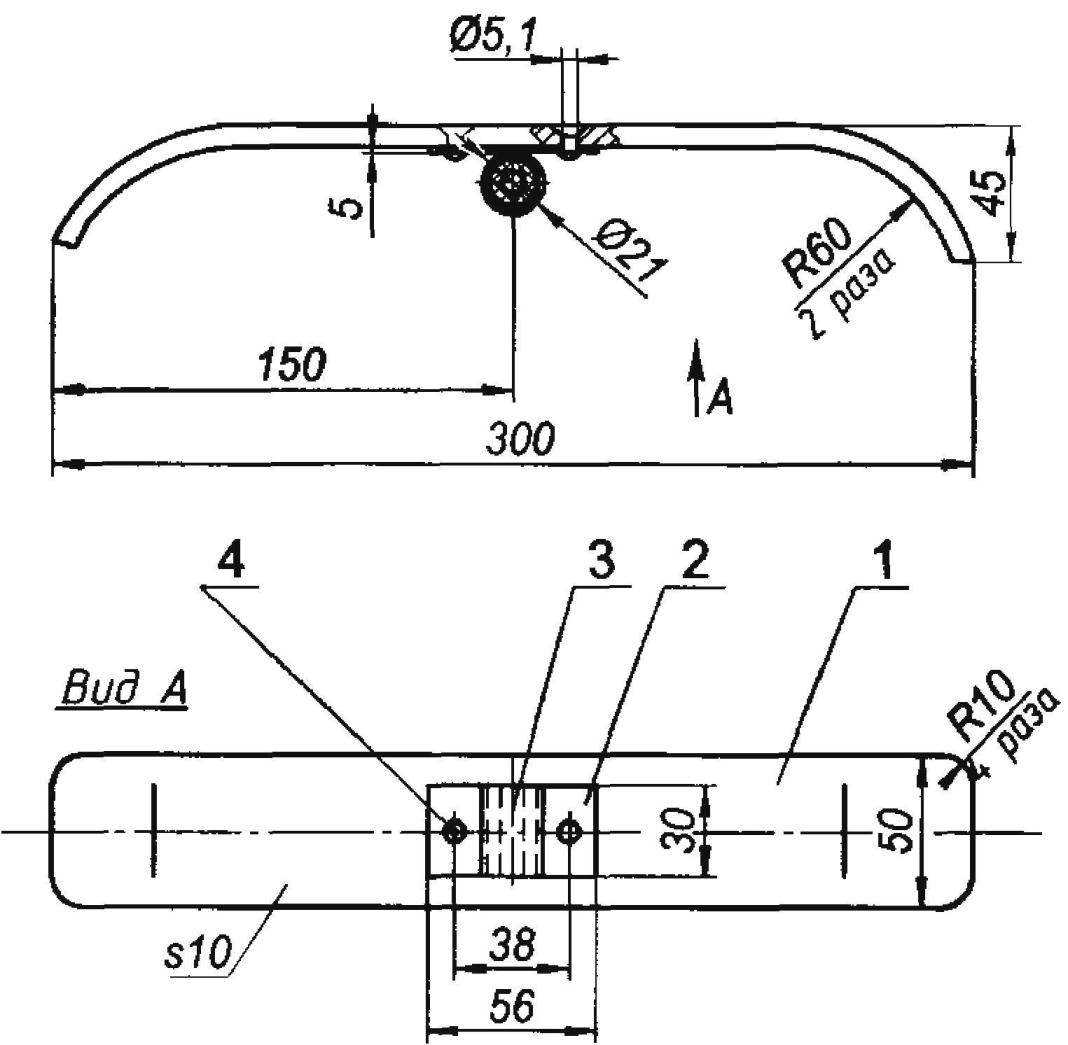 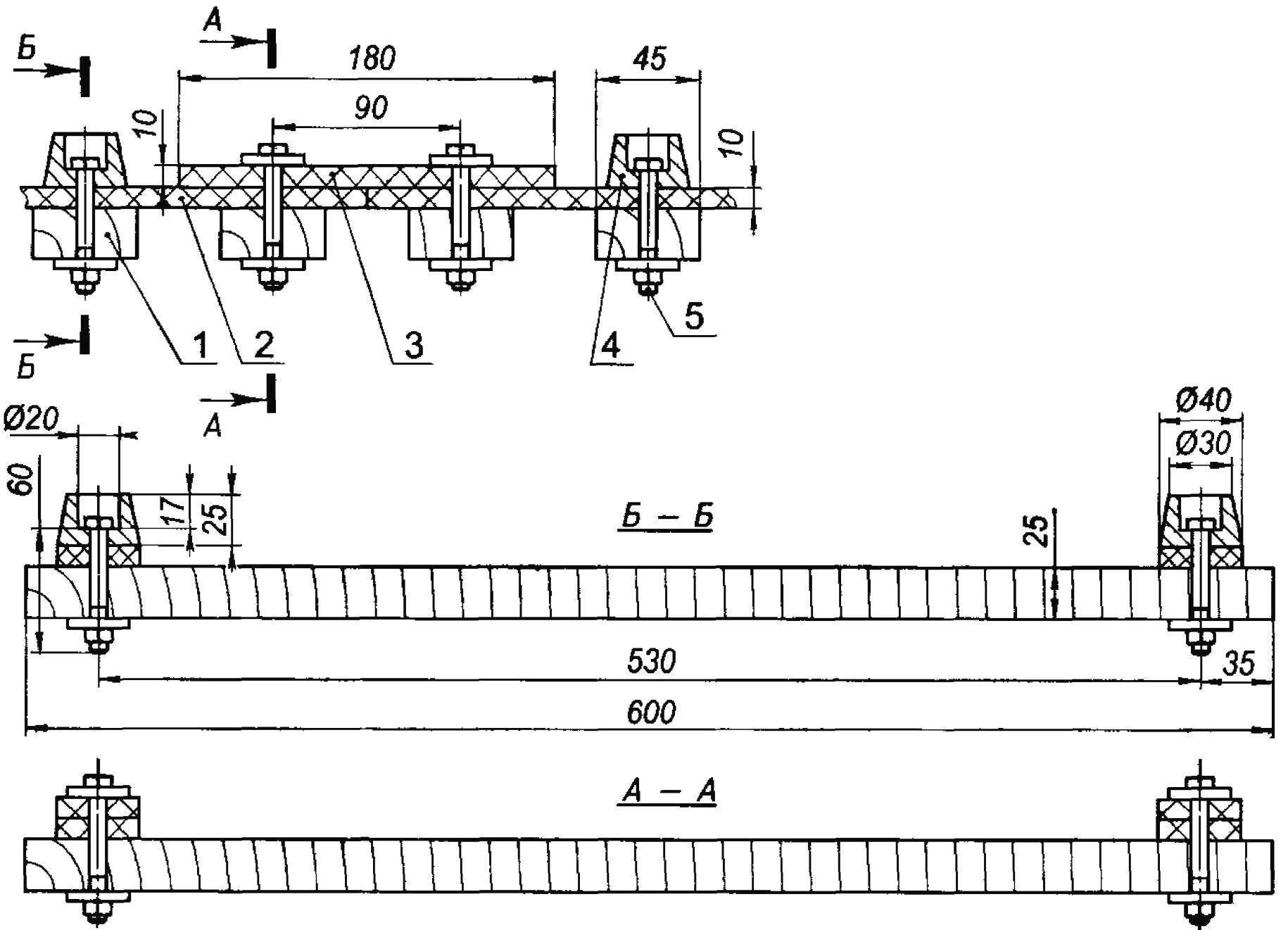 Caterpillar:
1—Trak (birch timber 45×25, compl.); 2—carrier strip (2); 3—connecting pad (rubber conveyer belt 40×10); 4—special washer “Bonk” (aluminum); 5 — fasteners
Ski support Assembly is attached to the frame via silent blocks. Rubber elastic elements in them to dampen the vibration and shock from heavy snow and especially ice clods, saving the wooden trucks from damage.
One of the important conditions of installation of the support skis on the frame are parallel to its lateral edges to the axis of symmetry of the frame and binding the location of her soles below the rollers of the driven shaft 15 — 20 mm.
The front (steering) skis of different width. The right one (while moving) is 20 mm wider than the left to compensate for the mass asymmetric arrangement of the power unit and the intermediate shaft. The basis of skiing, as support, water resistant 10-mm plywood. Socks ski heated with a blowtorch and bent. This position was reinforced tubular strut, which clings antiglaucoma spring. The sole is covered with a plastic sheet with a thickness of 5 mm, in the absence of such nylon. Each ski riveted on a pair of undercut boundary of the dural area of 40×40 mm.
The inclined location of the steering knuckle and guide the undercuts of the area on the soles of the skis make it easy to maneuver on the snow and rolled on the road. To protect the frame from shock loads and increase the comfort of the drive rack, the steering knuckle is worn enough hard damper springs.
To improve the performance of engine mechanical ignition has been replaced with electronic. Two-blade radial cooling fan is mounted on elongated bolt rotor ignition. Easy and very reliable!
“Bruins” is equipped with one front headlight, mounted in dural lining-hood engine compartment, and tail lights.
The windshield with the matched angle of inclination directs oncoming air over the top of the cap driver. It is also a flow of warm air from the engine cylinder to the legs and arms with fan forced cooling.
The control skis are made from ordinary 10-mm plywood, varnish impregnated, painted and covered the bottom sheet polyethylene. Bending the bow is achieved through a dynamic warm-up of the workpiece with a blowtorch, abundant irrigation water and smooth bending in the fixture. After cooling of plywood ski ready for further Assembly. Base plate, angles, lugs fastening the skis to the steering knuckle are made integral. Tubular lugs protect the ski from damage; serve as convenient handles when tilting of the snowmobile and mount the stretching of the springs. The stretching of springs saved from pecks and cuts in the snow when moving through snowy obstacles.
Concurrency control ski and undercuts on their soles as a prerequisite to the ease of management and improve cross snowmobile on a snow virgin soil. Adjustment of the parallelism of the ski runs threaded couplings on the steering rods.
Front hood-cowl manufactured from sheet aluminum, veneer tool kit under the seat, the floor, and subsequently the side flaps caterpillars of bakelite 4 mm birch plywood. The retaining lugs of the lining are welded in place.
The seat is made from plywood base, foam and durable waterproof leather. The seat tube to the tool box by a hook and bolt with the wing nut. 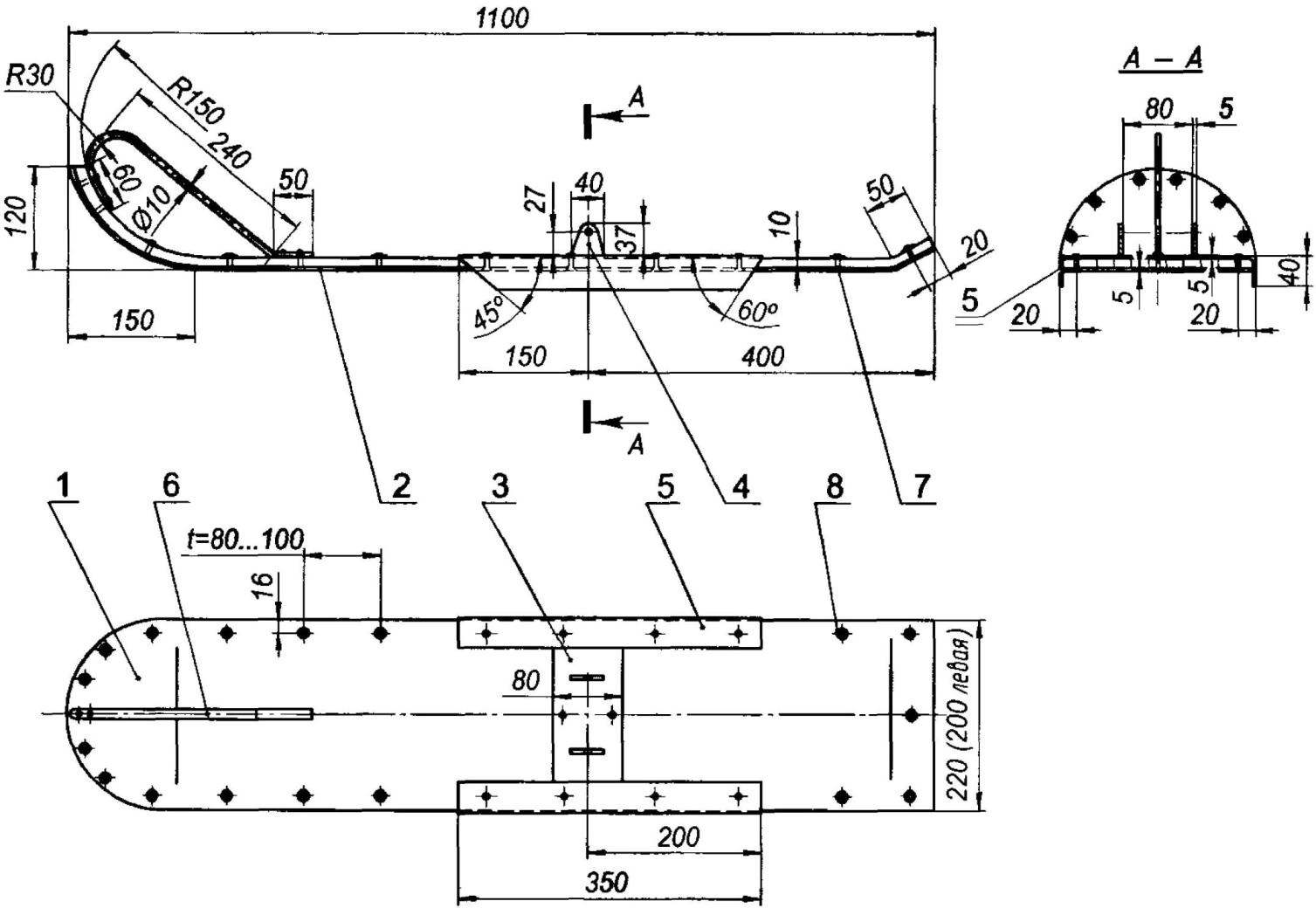 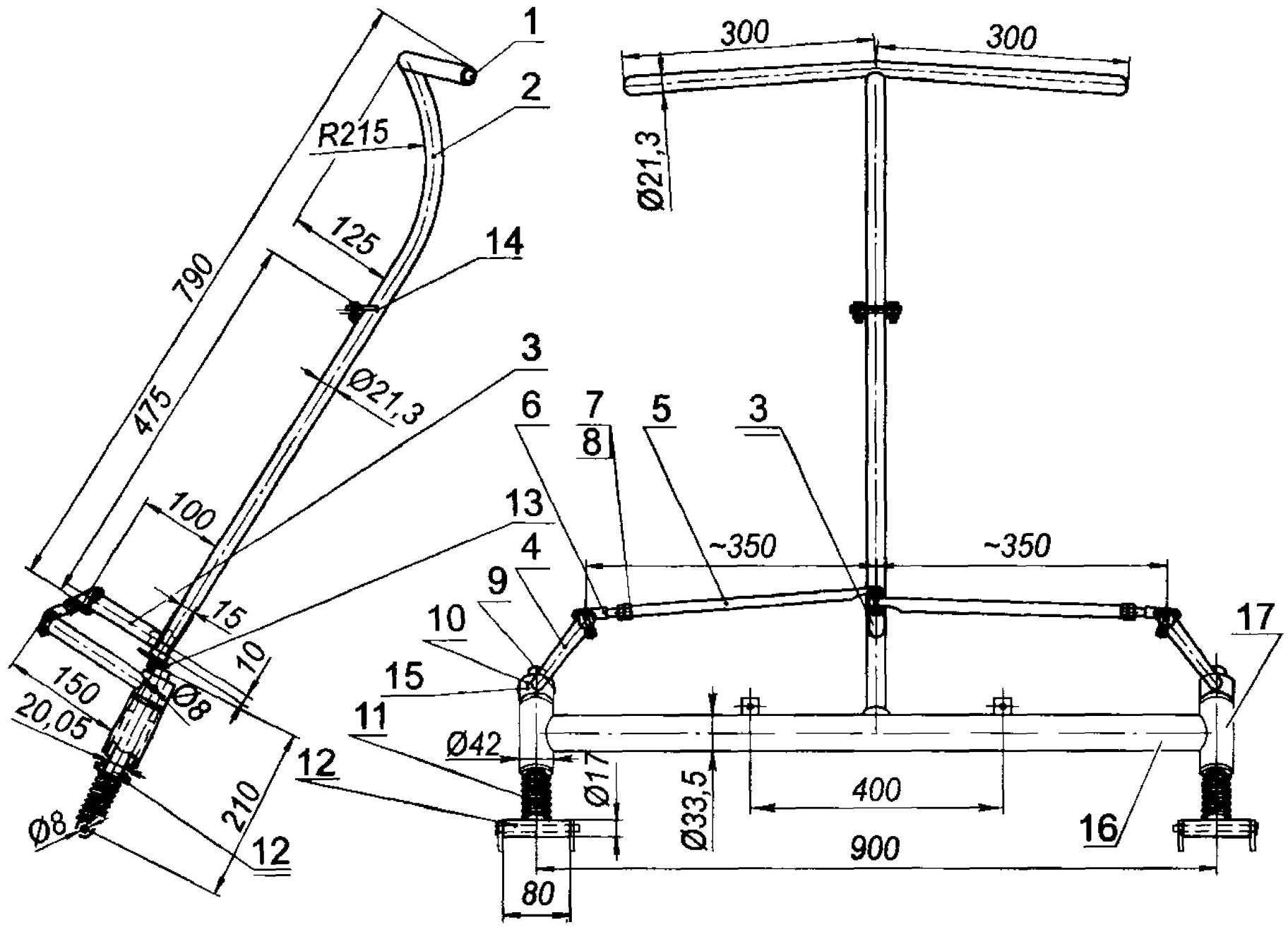 Node extension bushing output sprocket output shaft of the engine:
1—extension bushing (steel); 2—slotted insert; 3—the output sprocket; 4—bearing; 5—bearing; 6—rod linkage mechanism; 7—engine; 8—mounting bolt bearing housing to the frame spar
Largely “Toptygin” repeating the constructive solution of the previous snowmobile of the type of “Idea”, but it is from the author’s perspective on the subject and, in General, a fairly good prototype design. But compared to “Toptygin” all “thought” was something of his scale models. Powerful engine made it to “bear the rod” good dynamics, two swivel skiing — flexibility, as long and wide caterpillar — an enviable ride across the virgin snow.
The first trial tests of this winter (or early spring) of steel and last. The snow suddenly melted quickly. Following the heavy snow had to wait until the beginning of December. Only in December the following winter ran a full test on the snow covered fields and forests. They showed that the newly introduced in the design of the soft spring suspension supporting the ski did not meet expectations. Permeability was not up to par! The handling is unpredictable. Besides, and the motor starts with difficulty.
Dismantling a snowmobile, remade some of the units: returned reference lazaridou proven design — mount on four silent-block with four bolts to the brackets, the lugs of the supporting arcs of the frame (the specs for this upgraded option was offered to readers ‘ attention) . To improve engine start-up made a full bulkhead with landing joints with silicone sealant.
Another review homemade snowmobile equipment dedicated to the 23 February, “Bruins” was ready to show their best qualities. Re-running tests he went into the pine forest on the southern outskirts of the city on the way from home to the field where the competitions were held. Distance 8 miles on fresh neopterin the snow does not impede arrival to the beginning of the demonstrations.
The results of the competitive stages-tasks “Bruins” won the first place. And opponents were many. In fairness it should be noted that the majority of it was wheeled (on low-pressure tires) snowmobiles.
Subsequently worked on improving the design of your snowmobile at first made a few sketches of the General form. The most suitable embodied in the case. His quote in the drawing, since the photos “in full glory” and not made.
By next year, on a wave of enthusiasm in Zavodoukovsk were born with a dozen like “the Bruins” track snowmobile, which is confirmed by the photos of those years. 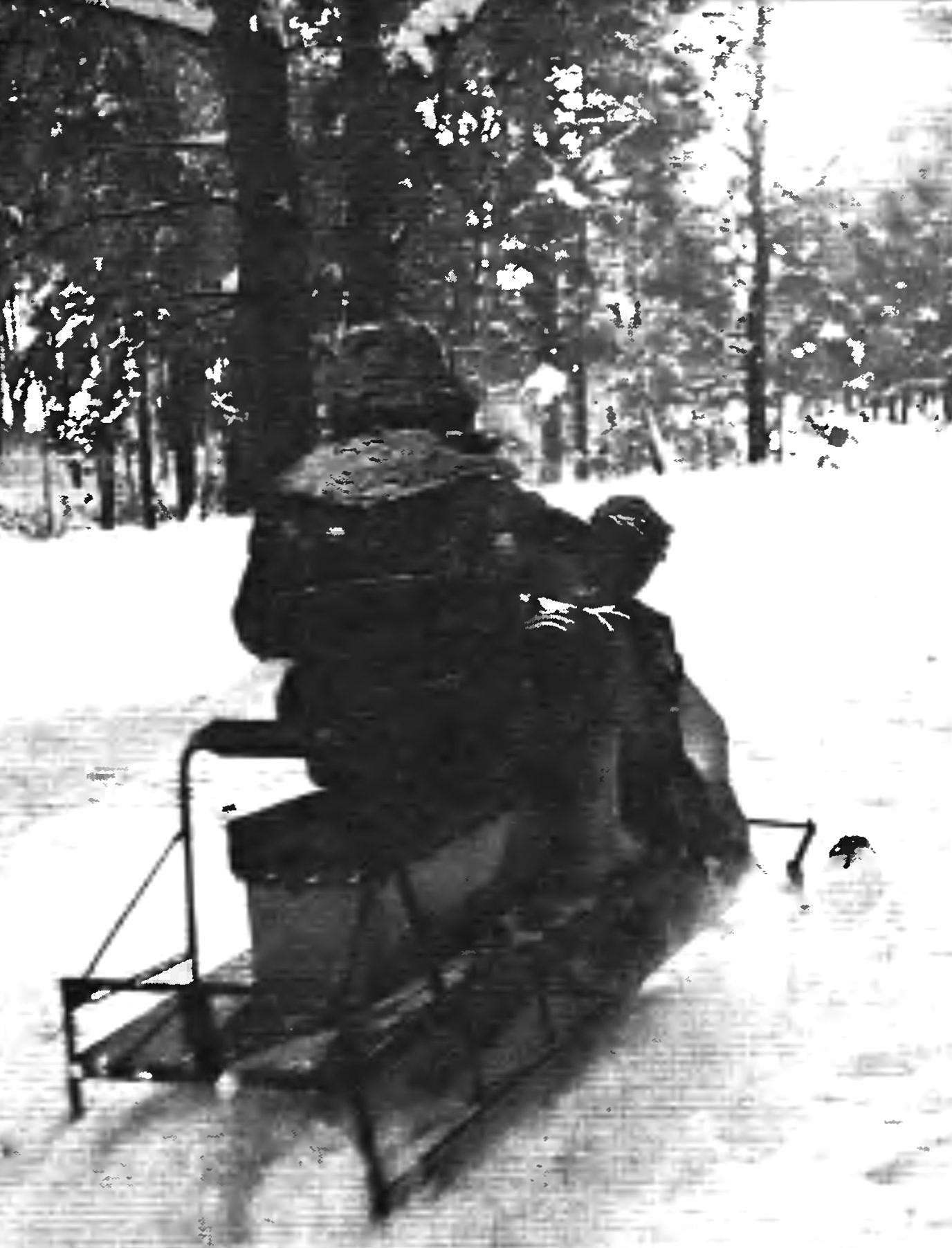 By next year, on a wave of enthusiasm in Zavodoukovsk were born with a dozen like “the Bruins” track snowmobile, which is confirmed by the photos of those years. It is a pity that the mass of interested spectators, for the most part, of course, male sex, and among them—the boys behind the scenes.
But these “cane” snowmobiles, in General, ended the era of snowmobiles on the tires. In terms of comparative tests have all had more all-terrain tracked “stick insects”, compared to “ka-measurers”, in soft snow of the forest zone of the Tyumen region.
But the “Bruins” did not stick in my garage. I’m not a hunter and not a fisherman. Found the option profitable exchange for scooter cargo “the Ant” and I agreed.
Those who think about to build the same snow motorcycle, I want to remind you that the homemade equipment with an engine displacement over 50 cm3 will have to take on the technical Commission and to put on record the supervision. Besides, to control and homemade snowmobile requires the certificate of the tractor operator-the driver or the driver’s category “A”.
A. MATVEICHUK, Zavodoukovsk, Tyumen region.