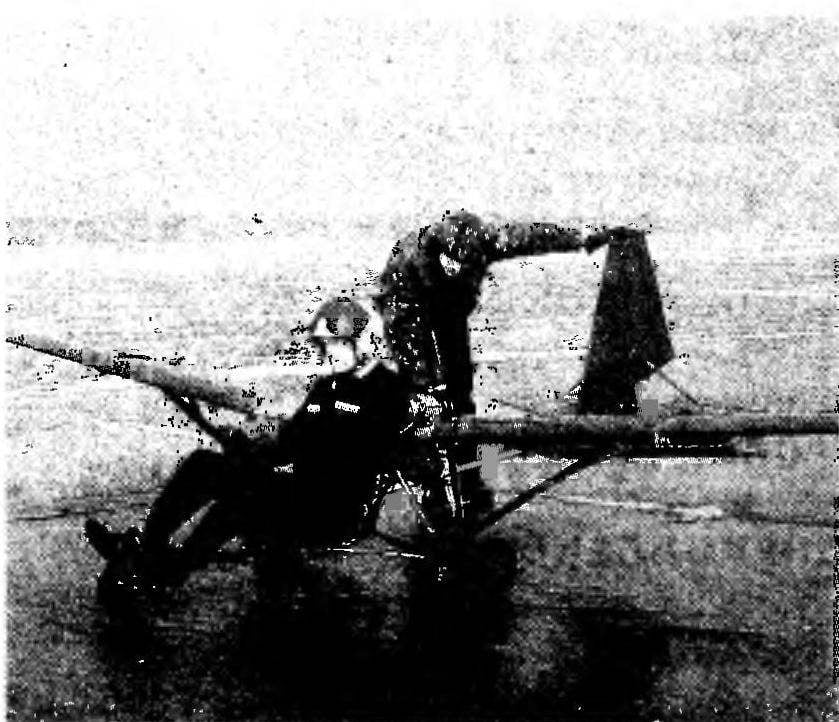 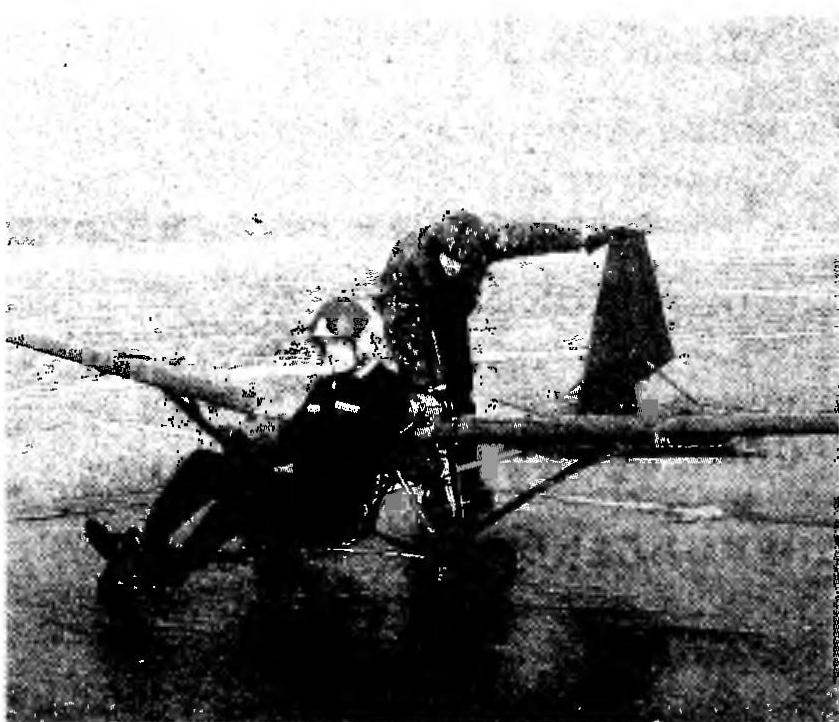 Ultralight aircraft V. Dmitrieva series X-14 a few years ago aroused great interest among aviation enthusiasts and professionals, attracting its originality. They exhibited at the international air shows, these were reported in the national and foreign press. I passed the information about these devices and in our magazine, however, is short. Deciding to bridge the gap, we have used letters, where the designer talked about himself, about how came to the idea of creating such aircraft.

From childhood I dreamed to follow in his father’s footsteps in aviation. Repeatedly tried to enroll in various aviation school or flying club Kyrgyzstan, but through no fault of my reasons this did not happen.
Then I decided to make my own planes and fly them. In the process, faced many challenges, including a lack of knowledge in special subjects, so I had to take tutorials to learn to build and to test.
The story of the creation of my planes long, but in short, I built about 30 aircraft and their modifications. For the most part they were of high quality, but some of them had unique characteristics.
Experience the aircraft also had to himself. Had developed a training aircraft, which practiced the technique of piloting.
Due to the limited financial capacity of the materials collected at Aviasalon, motors taken from a decommissioned sport motorcycles. Because these pseudo-motors more than 20 times in the air, with no “thrust”. And as a pilot I’m low class, you had to build airplanes with very good takeoff and landing characteristics. So on my “X’s” can fly even with a medium level of training.
Notable features of my aircraft are small, light and collapsible. To a large extent contributed to this “production area”, which I had. Thus, the wing of the plane X-14d falls freely in a box of length 1 m. 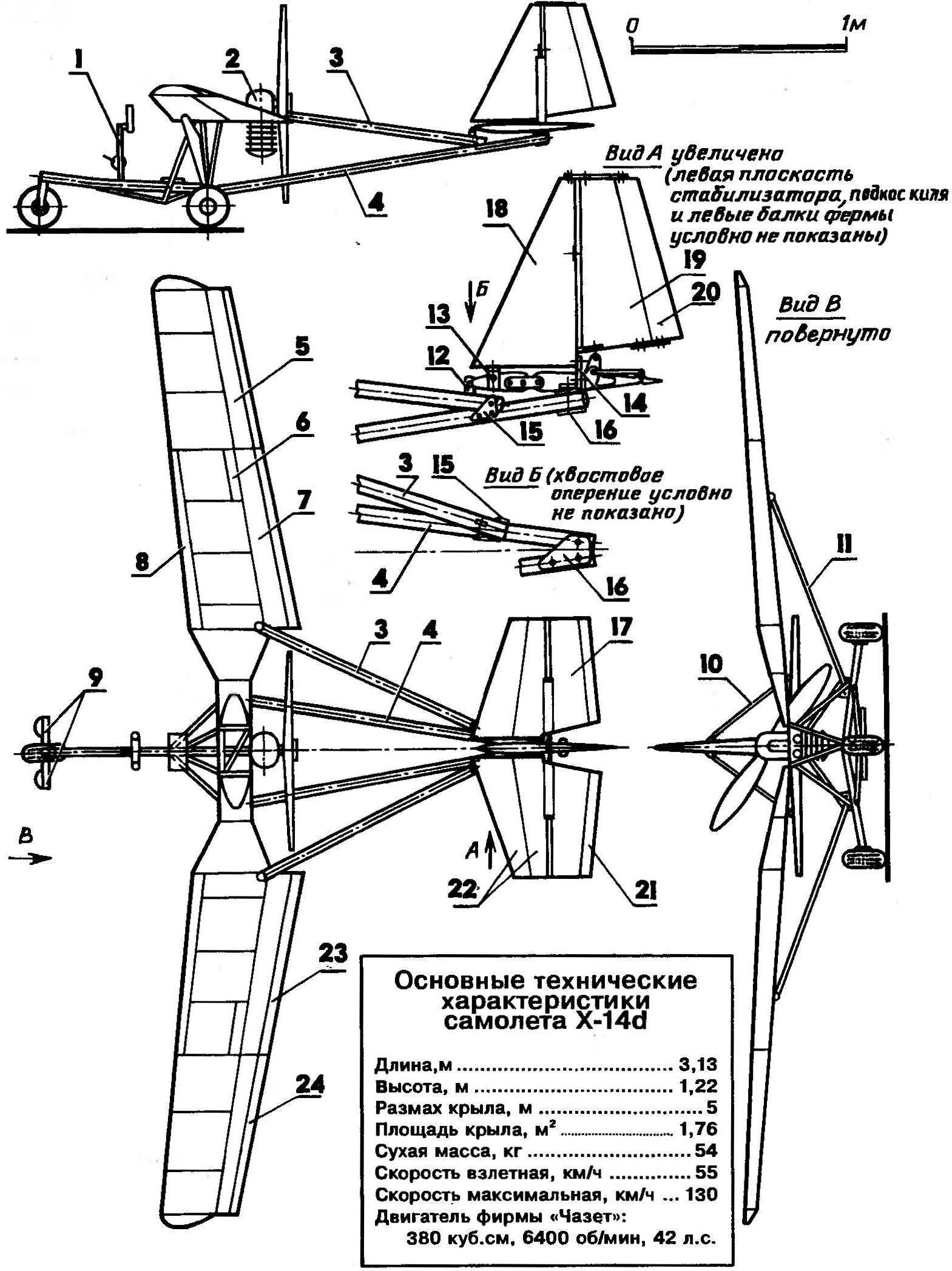 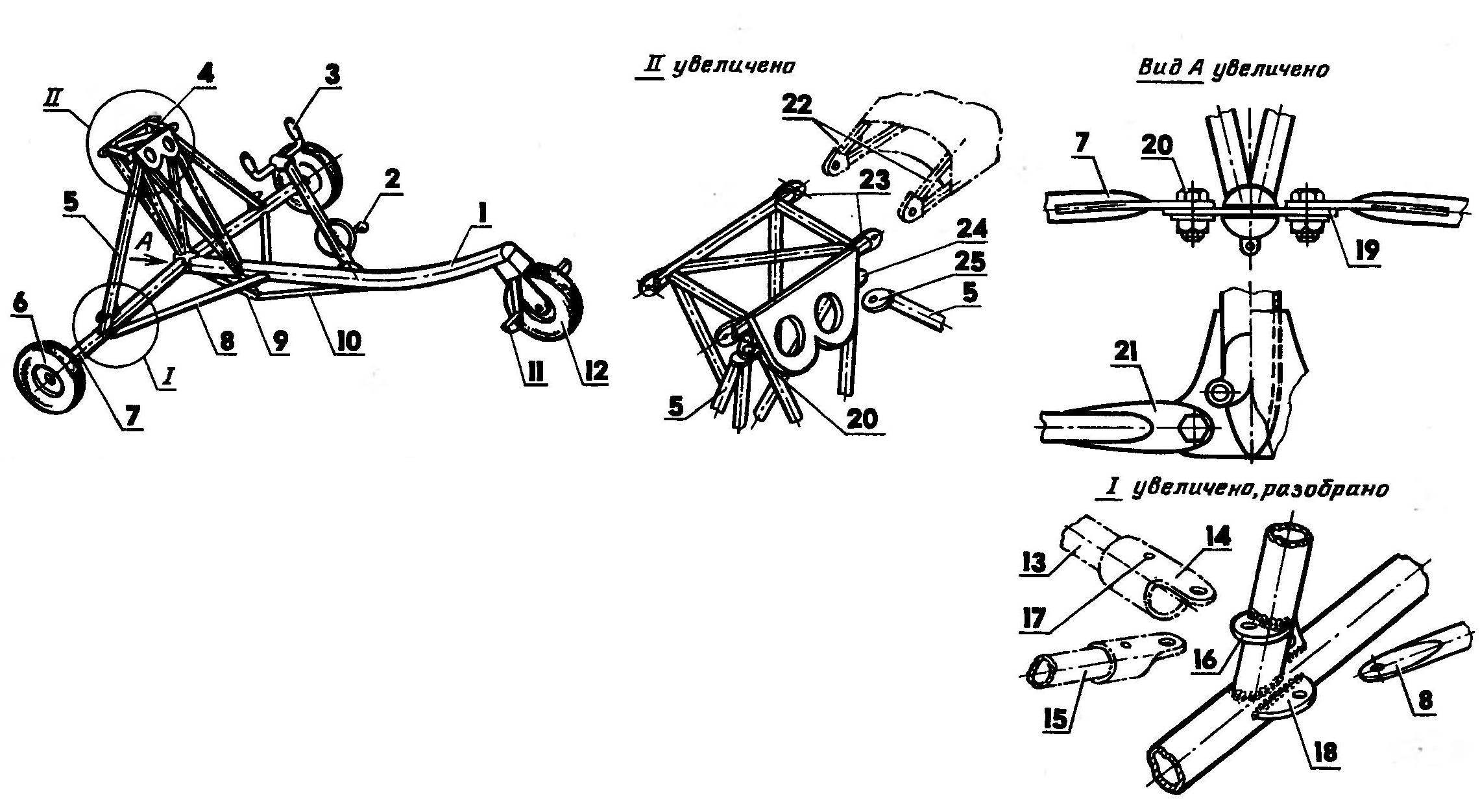 Scheme mechanization of the wing:
1 — slat, 2 — guide rollers cable harness, 3 — control cables, flaps, 4 — the first section of the flaps (rigidly linked to the second), 5 rocking flap which is 6 — second section of the flap, 7 — shank flap, 8 rocking of the shank, 9 —rod shank, 10 — control cables, slats, 11 — rocking chair slat, 12 — thrust of the slat.
For example, let’s talk about design that is machine X-14d. It embodies almost all of my ideas. She, like all the previous, modular and consists of the trike, wings and tail.
The basis of the aircraft is cart. Frame consisting of longitudinal beams and of the engine subframe (mounted on racks), welded from thin-walled khro-masilevich pipes 0 12…35 mm. attached To it: the beams of the main landing gear and the struts, wing, knot front turning landing gear, control column and engine.
The main beam supports and their struts are connected with frame by bolts and additionally fixed rods. Wheel set of skis (200×60 mm), two of them — the main — feature disc brakes. Although better would be “quilted”, calculated at the desired load.
When mounting the wing panels to their spar joined to the engine cradle, and then fixed with struts.
The front of the plane is connected with the tail of the farm, which is a four beams from dural pipes in diameter of 30 mm and a wall thickness of 1…1.5 mm. the Rear ends of the lower beams are fastened together by brackets, which are installed on top of the headstock to the tail
tail. The front ends of the beams (upper and lower) have ferrules, for connections with nodes hanging on the root ribs of the wing and the struts of the trolley. The upper beam are connected with the lower brackets pairs, too.
Mount the tail is assembled using three nodes located in the lower part of the rear wall of the keel and on the toes of the planes stabilizator.
Doing a lot of years to improve stability at low speeds and landing characteristics of their aircraft, came to the conclusion that the wing need to do the reverse sweep and a well-mechanized.
The basis of the power set of the wing are two I beam side rail with walls made of fiberglass 1.5 mm thick and shelves made from pine slats with a cross-section 18×12 mm to the root of the cross-section 18×18 mm at the site of attachment of the strut and section 18×6 mm — tail. Toe console sewn glass-textolite sheet of thickness 0.25 mm. the Rest of the surface (including tail) is covered with a nylon fabric, on which to stretch applied enamel. The relative thickness of the airfoil — 14%.
The front edge of the wing equipped with a slat, occupying 1 m in length and 15% of SAH (mean aerodynamic chord). Slat and flap are interconnected via rocking two cables that provide their simultaneous extension and retraction.
Trendeleva flap (34% SAH) is deflected downwards by 60°, and the shank 22° 30′.
Double slit Aileron (35% SAH) is deflected upwards by 23°, and down to 16° (the shank at 16° and 11° respectively). It is associated with the spoiler, which after raising the Aileron at an angle over 10° opening upwards by 45°.
Stabilizer empennage is made in the adaptive scheme, according to which the deviation dvuhmetrovoe of the Elevator up to 35° down 23° (shank 17° and 11°, respectively) is the deflection and the middle part of the stabilizer 6…9°, which leads to a change in the configuration of the profile and angle of attack. This scheme allows, for example, the pilot quickly restore the horizontal flight regime when the inevitable “peck” of the aircraft at the time of issue of mechanization of the wing.
Management system rudders, and the elements of mechanization are practically identical — to the root ribs she rope (steel wire rope diameter is 1.8…2.0 mm), after them is hard, consisting of rods and servo horns (D16T sheet thickness of 1.5…3.0 mm).
Of course, the disadvantages enough, but on the basis of the design of this apparatus, it is possible to build planes special purpose.
V. DMITRIEV, Mikhailovka, Volgograd region.