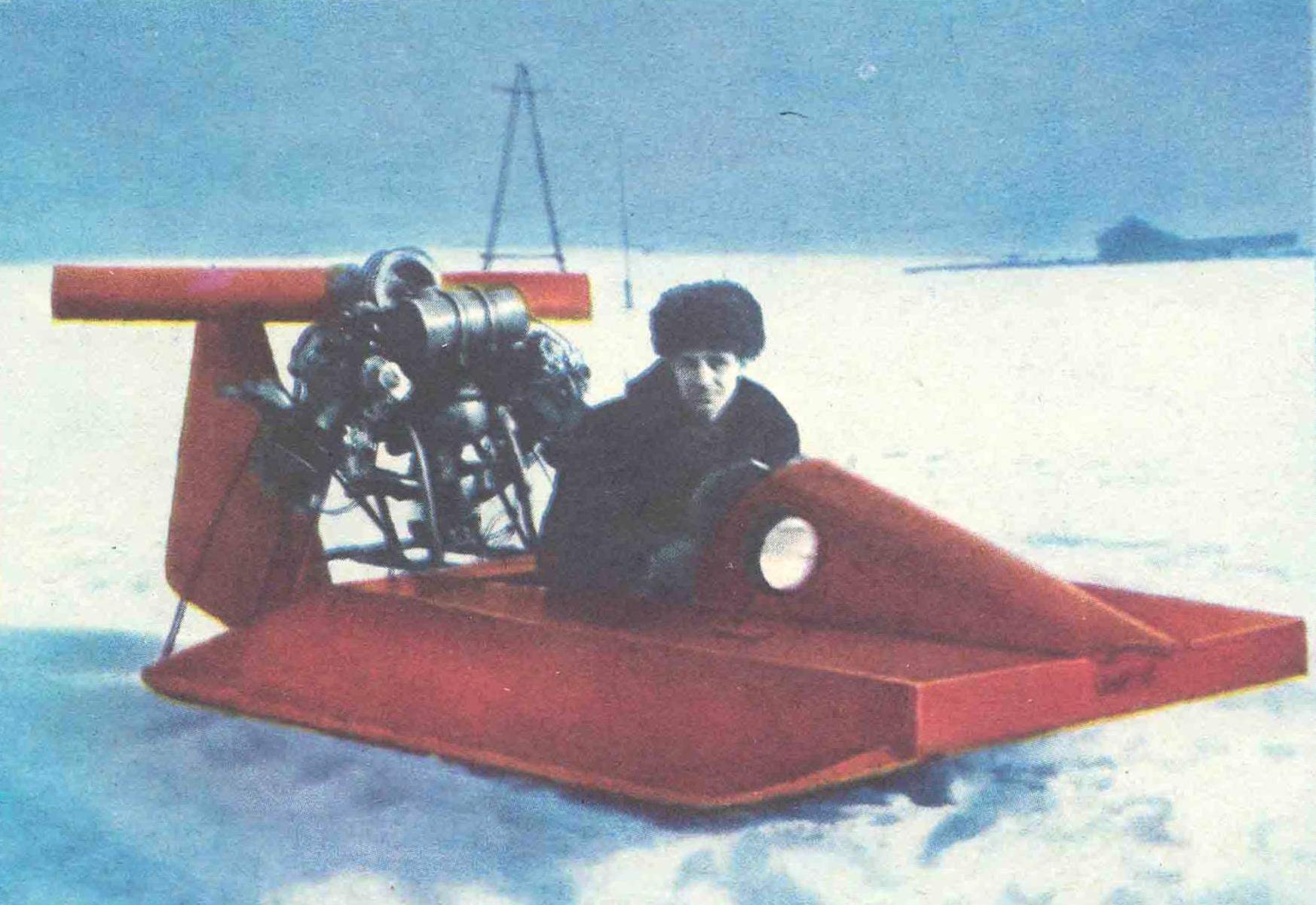 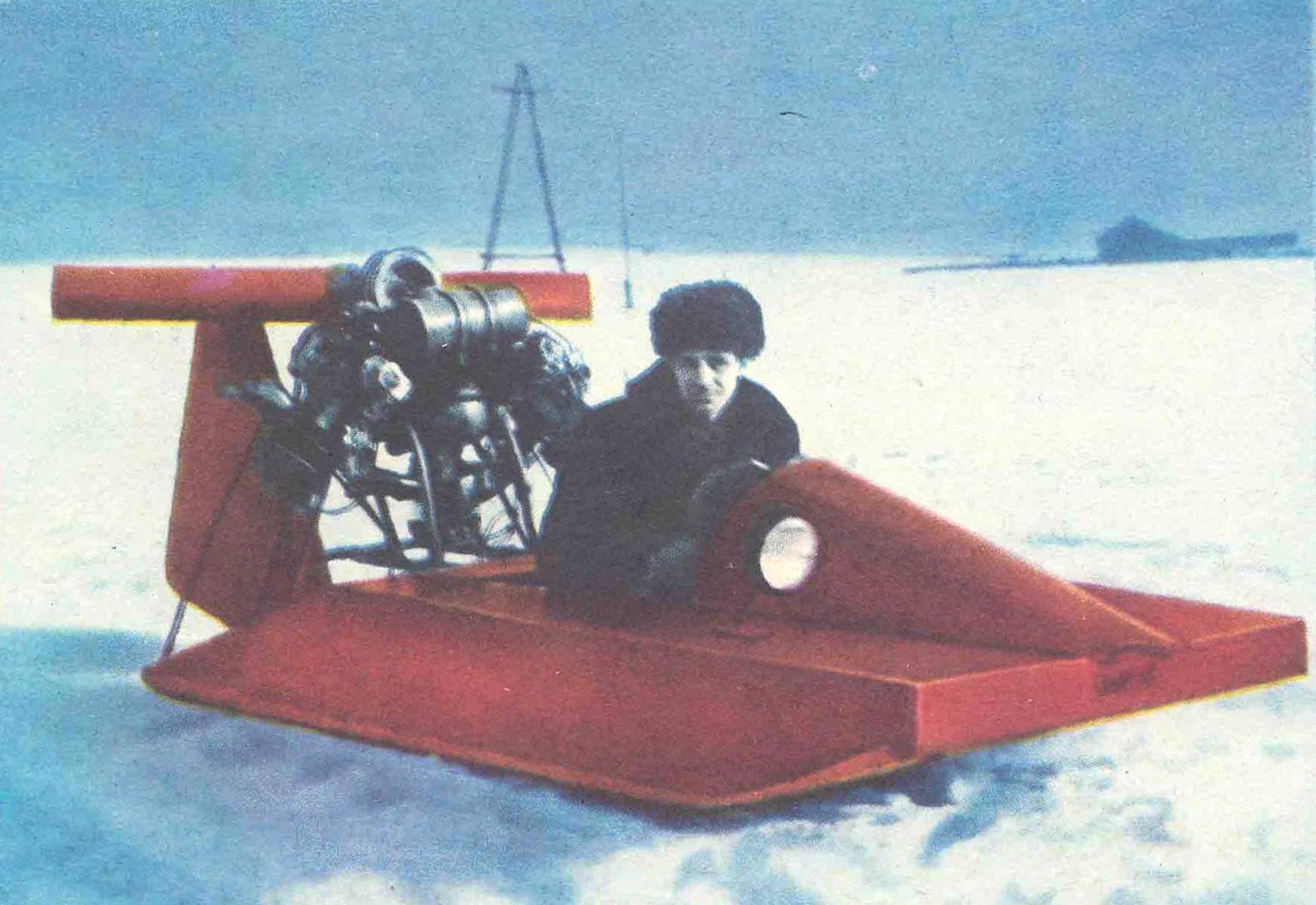 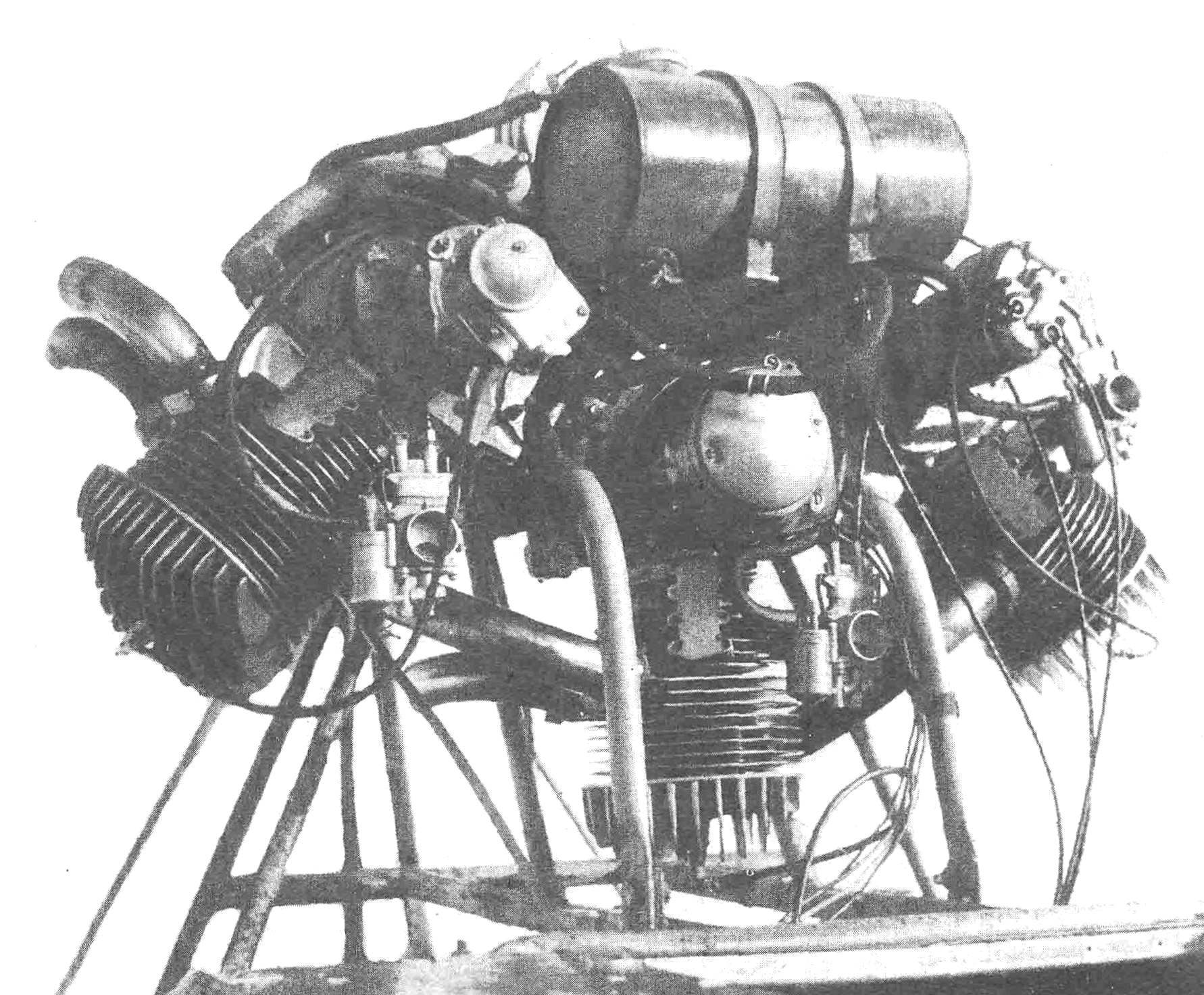 Our magazine wrote many times about the reader’s development of engines for different homemade cars, planes, cars, hovercraft, and even for aircraft operated with the process of technical creativity. These enthusiasts pursue basically the same goal — the creation of relatively light weight of the engines, which power would fill a gap in the row engines of industrial production and would achieve the diys satisfactory performance.
The power range is achieved Amateur designs, is in the range from 20 to 160 HP
Every Amateur designer before starting the engine of the available ready nodes, addresses are usually private, specific objectives, which usually boil down to the following.. Create an engine needed for the construction of the machine capacity and the lowest specific weight (i.e. weight per 1 HP received power); with minimum dimensions or convenient, for. this machine features the design of the engine and its components; with maximum use of prefabricated parts and units of engines produced by the industry and commercially available. The last task faced most frequently since the production of engine parts at home, of course, very difficult.
Many fans of technical creativity in solving these design puzzles “” to find a pretty original moves. For example, this one, not the usual engine installation for snowmobile-amphibian made by the reader Valery Plantinum from settlement Lenin the Kirov region.
First we built the snowmobile amphibian with motor motorcycle M-72 with the capacity of 22 HP, However, on tests with a rather large own weight of the structure and two passengers, the machine showed satisfactory qualities. The speed was low, the permeability is restricted, the engine was at the limit and quickly overheated.
Then came the idea: to get more power motor installation, combining in one unit three motorcycle engine “IZH-Plaketa” and forcing them together to turn a single propeller.
And so the work is completed. The total weight of the unit compared to the M-72 grew by only 10-11 kg, but the power has more than doubled and reached almost 50 HP
Engines “IZH-Planeta” was used in its entirety, but without the box changes gear.
The most difficult part was to connect the engines. It had to be made to repay the resonance that inevitably arise during the work (after all, engines “ustraivayutsya” without hard, consistent connection and operate independently from each other). 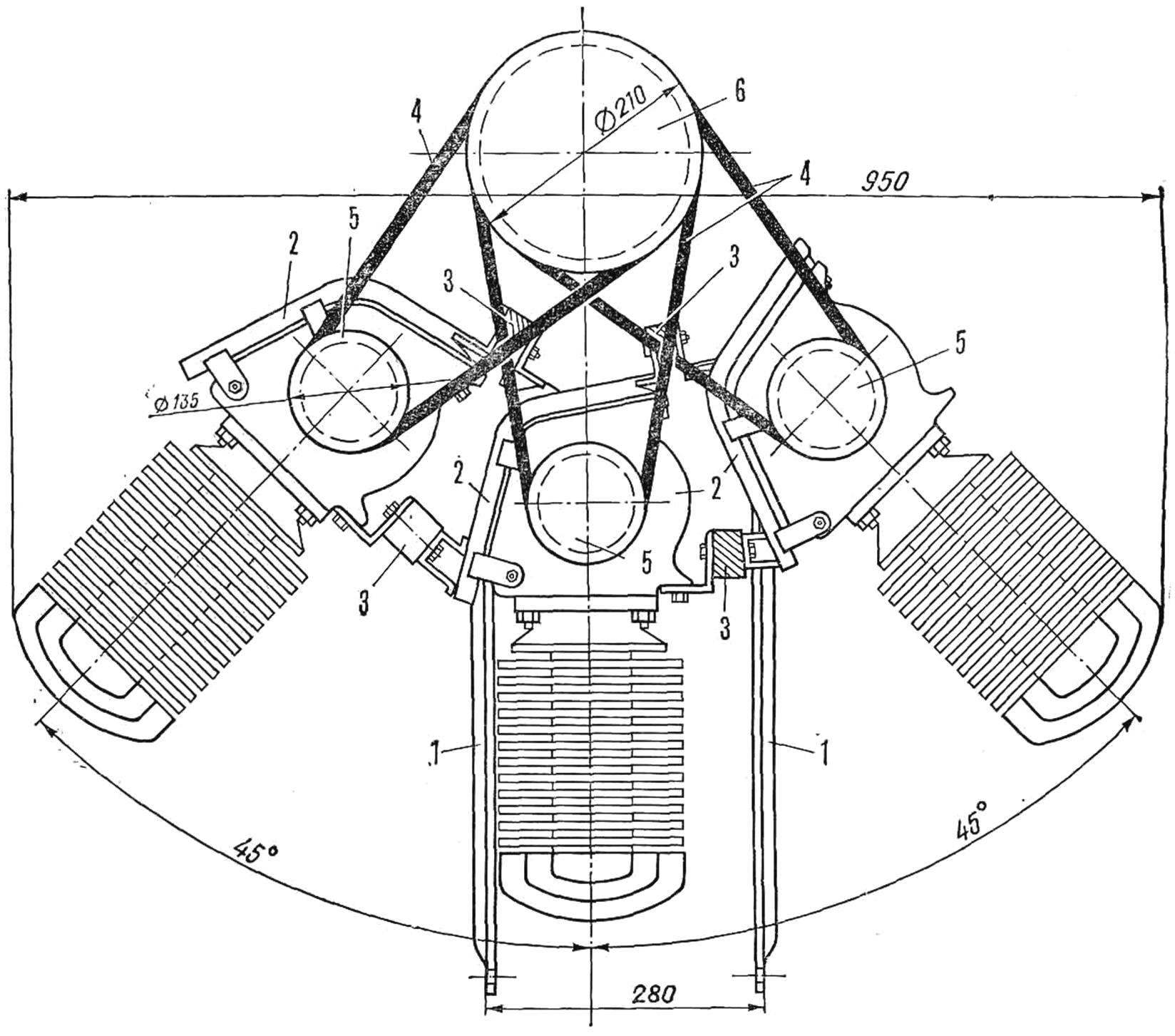 The scheme of installation of three engines IZH:
1 — vertical rack motor; 2 — brackets, l-shaped, bearing on itself the engines; 3 — elastic elements of the suspension; 4 — power transmission V-belts; 3 — drive pulleys on the motors; 6 — driven pulley on the shaft of the screw.
Each engine was installed in that frame, made of pipes of the arcuate shape to which the motor is attached through available for this in the crankcase holes at three points. The subframes are interconnected through a rubber suspension cushions and are attached to a common frame W motorboat four points: two above and two below.
The drive shaft of the propeller is located above the engines, carried out by V-belts. On the shaft this is mounted on the dowel dural pulley having three grooves running profiled.
From each engine (with pulley fitted on the shank of the crankshaft) transmission pulley shaft of the propeller is made of a V-belt, within its groove without distortion. To do this, the engine in the longitudinal direction have a small offset. Belt tension is ensured by installation of auxiliary rollers.
The shaft of the propeller is placed in a metal enclosure and supported on two angular contact roller bearings N° 7205. They work in oil, wash down in the body through a special tube. To prevent leakage of oil over the bearings installed stuffing rubber cuffs.
On the outer end of the screw shaft in a special sleeve, seated on the keyway on tapered shank placed the propeller. It has a Ø Of 1.6 M.
Each engine has its carburetor type K-36И. The air is supplied thereto through inlet tube welded from sheet steel. The inlets they are deployed in the direction of motion. This allows for the pressure of oncoming air slightly increase the filling of the cylinder with a combustible mixture. Carburetors adjusted for synchronous operation and the same air-fuel mixture. Management is made through the junction box.
Fuel in the sled is placed in two tanks: a main — down in the machine frame, and further fixed above the engines. Fuel supply secured car diaphragm pump operated by eccentric shaft.
Ignition system for two engines has undergone a change — they have magnetos. On one left the old scheme with the generator. Electrical equipment is designed for motorcycle scheme, using relay and battery. Mounted on the snowmobile motorcycle headlight provides illumination of the road when driving a vehicle at night.
The engine start is carried out from one, “launch”, the extreme, the engine on which the pulley has an extra groove for the winding cord.
Run in that order.
First, tensioner pulley V-belt “trigger” motor is out of position. The strap is weakened and the pulley is free to rotate. It is wound on the winding cord, and jerks run this engine. When the motor is sufficiently warmed up, the two other engines open the decoder, and the tension roller belt “starting” the motor into operating position. The belt starts to rotate the screw shaft, and through it — the two are designed to start the motor. Sequentially disabling the decoder, start the remaining engines. All three start to work on one propeller.
As shown by the operation of this motor, it provides steady work as on small, and at high speeds; has good throttle response and quite sufficient for this machine’s power.
The total weight of the snowmobile-amphibian about 200 kg, the speed of her movements on virgin snow up to 50 km/h.
V. PLENKIN, village Leninskoye in Kirov region