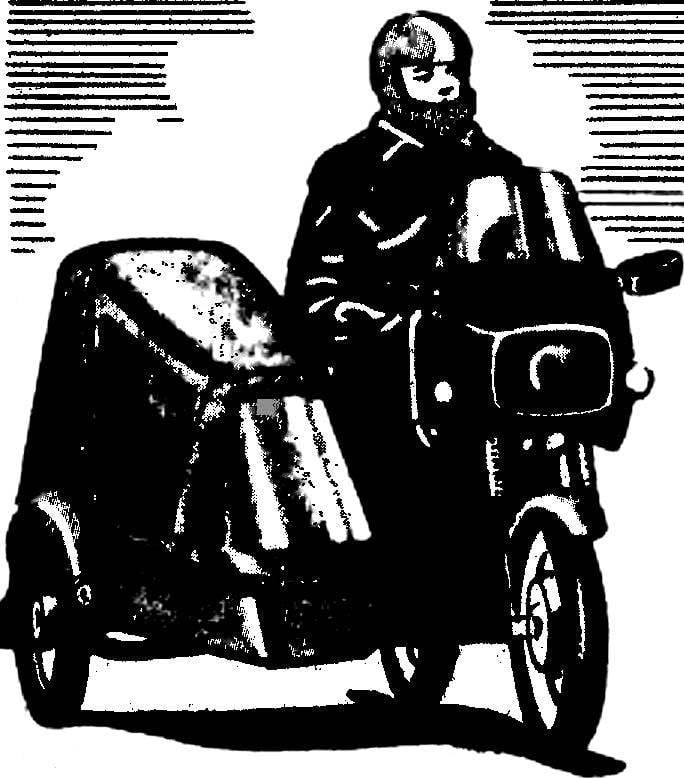 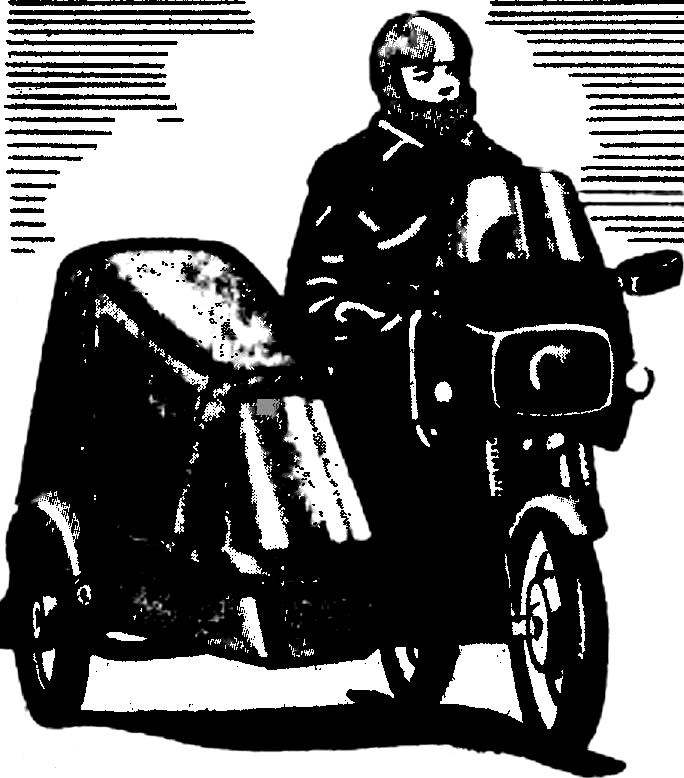 Of most interest to the weather reports for tomorrow show… motorcyclists. Indeed, unexpected rain or, God forbid, snow transform trips on a two – or three-wheeled cars in torment. While it is not so much the driver (he knew what was going on, getting open to all the elements the car), how many passengers. Even in a side trailer can’t hide him from the weather troubles. That is why many motorcyclists are trying to solve this problem, creating on the basis of the serial side of the trailer closed cockpit with a particular level of comfort.
I want to acquaint the readers of “M-K” with one of their developments. It’s a closed cabin to the side of the trailer a motorcycle “IZH-Jupiter-5”, constructed with the use of standard strollers VMZ. To turn her into the cabin, it was dismantled the tailgate and front hood; the base of the trailer with the passenger seat alteration were not exposed. Homemade top can be easily removed, so that at any time there is an opportunity to return to the original open version.
The upper part of the stroller is solid wood. Almost all of its elements such as the frame, and paneling is made of plywood and hardboard. The cockpit has a developed glazing, lifting the hatch to the embarkation and disembarkation of the passenger and the door in the back of the cab, opening up access to the voluminous trunk.
Work on creation of the closed cockpit suggest to start with drawing the appearance. Because it should be combined with the composite by bike, we can recommend the following method of operation on its design.
For a start , you need to take a picture of your motorcycle in three or four different angles: front, rear, side from side, back and front “three quarters”. After that photos taken, for example, on paper 18X24 or 24X36 cm, overlaid tracing paper or glassine paper, and on this translucent paper is drawn look of the cabin. It makes sense to draw it in several ways: imposing then each figure in the photograph, you can select the best — alone or with like-minded friends.
Having selected the final version of the cockpit, you can begin drawing the designs, choosing convenient scale, e.g. 1:5. We must start with the side view: first, to portray a regular basis stroller, precisely removing its size, then the passenger seat and sitting on it man — make it better than using the standard articulated mannequin made of transparent plastic (of course, it needs to be done in the same scale as the drawing). In addition, it is necessary to “force” a hinge man to lean forward and stand up in the stroller and lock in all three positions in the drawing.
Enclosed cab my trailer has the same windshield as a production wheelchair, so when drawing you must consider the size and shape of this glass. All other cut from the sheet of organic glass thickness of 4 mm.
When drawing midleware section of the cabin should take into account that the regular base of the stroller is quite narrow, therefore it is not advised to get carried away with excessive collapsing of the side walls tilt them to vertical should not be more than 5°. 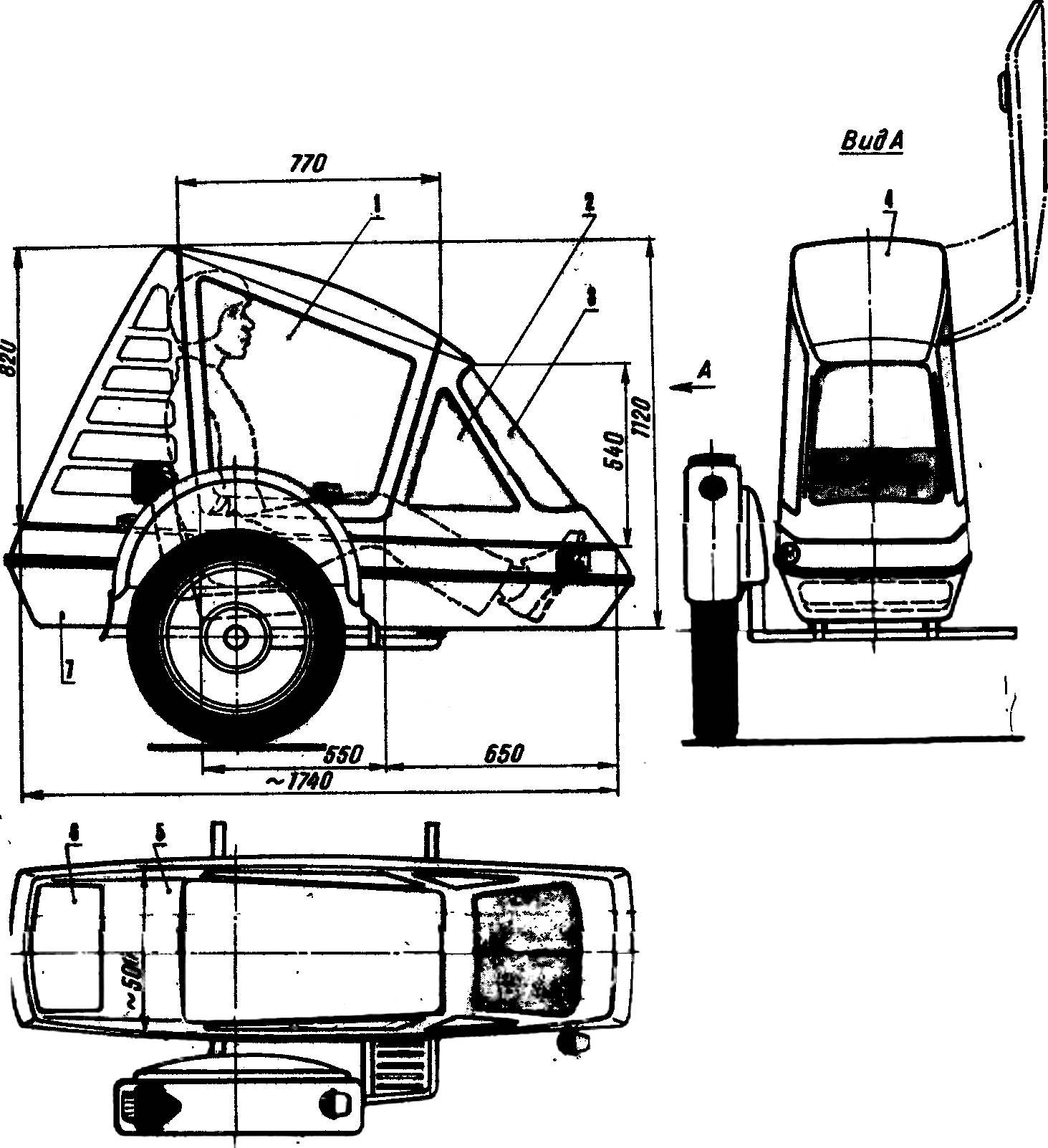 The passenger cabin is”luxury” for the side of the trailer motorcycle:
1 — door window-sun roof (plexiglass thickness 4…5 mm), 2 — front side window (plexiglass thickness 4…5 mm), 3 — front window (regular glass rock trailer VMZ), 4 — lift door-hatch, 5 — improvised upper part of the cabin, 6 — tailgate 7 — side trailer VMZ is removed from the hood.
When you are finished drawing, you must draw Plaz — external contours of the frames in full size. For making the Plaza quite suitable any sheet of plywood or even drawing paper, cardboard of suitable size.
Plaz is fixed on a level floor or panels of chipboard; along the outer contour of one of the frames hammered the nails so that the outside was about 60 mm. is Then from 4 mm plywood cut into strips with a width of about 50 mm from these strips and press the frame, as shown in the figure. Strips promazyvaetsya with an epoxy adhesive and gently laid along the line labeled in the loft hammered nails. Each of the next bands first fixed temporarily hammered into the shield long nails, and then, after putting some of the frame of the desired thickness, package plywood strips cinch clamps.
If you do the cab like mine, you will need two of these bulkhead, as you can see from the pictures, they together with the base frame to constitute the power basis of the framework. By the way, the base frame of the cab wikiepedia the same way as the frames. The form needs to fit the contour of the docking area regular stroller bike, so plazovy drawing should be performed strictly in accordance with its size. As with the frames, the frame is laid out from strips of 4mm plywood with a width of 50 mm on the epoxy binder; the total thickness of a set of 20…25 mm.
Docking of the base frame and two key frames is done using plywood gussets and wood inserts, as shown on the drawings. Then installed the strut forming the frame of the windshield; on the racks, which consists of wooden slats with a thickness of about 25 mm and a width of 40 mm, then the so-called “quarter” — a groove for installation of the windshield. Similarly set and rear rack, form the frame of the tailgate, as well as longitudinal (left) stringer roof.
Now the frame should be placed on the base side of the trailer and temporarily mounting bolts, using standard mounting holes of the hinges front and rear hoods, and you can start making a lifting hatch. The frame is also assembled from plywood strips, put in place (in the frames of the door opening) and fixed with small nails. Strips pre-promazyvaetsya with epoxy glue. Bends are applied pre-cut letter G and bent billet, which they soaked in water, bent around a suitable – shaped block of wood, were fixed on him carnations, and in that position dried. When vitlake the joints between the strips must overlap adjacent plates. So the billet frame Luke turned solid, pull on her clamps, using wood blocks as spacers. Below the hatch is easily opened and closed, before laying the plywood blanks frame of the hatch lay in the doorway strip of cardboard and plastic film. The latter will not allow the blanks to be glued to the frame of the cab. 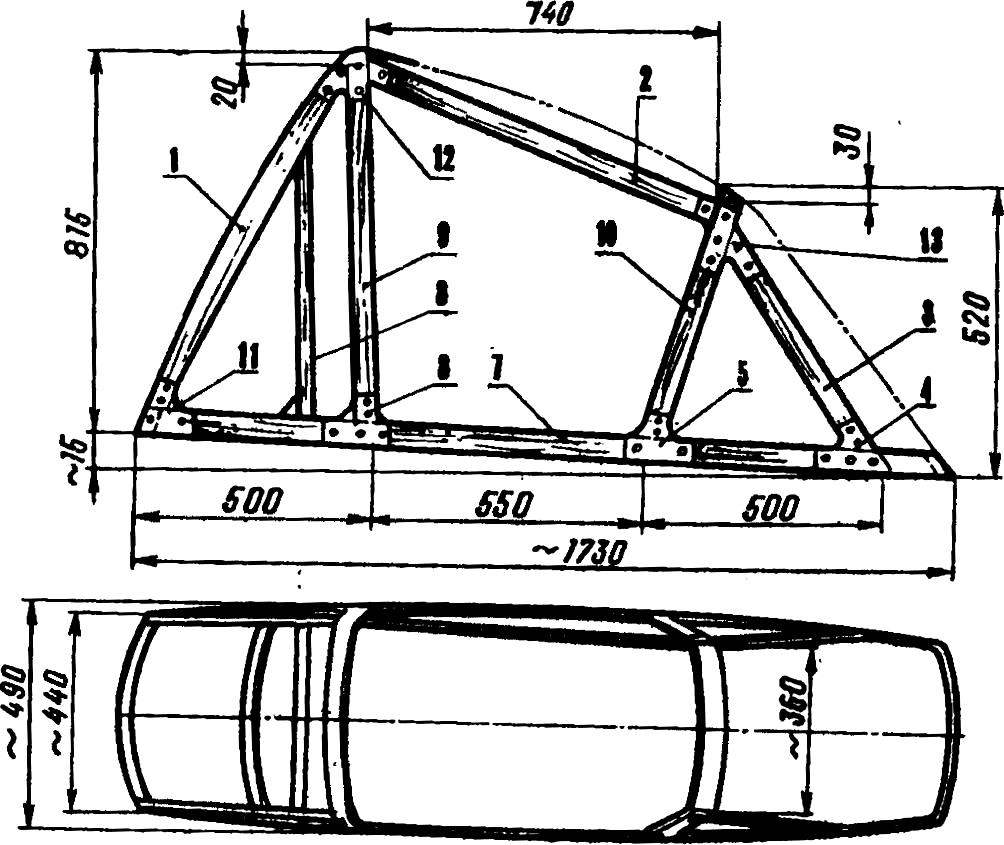 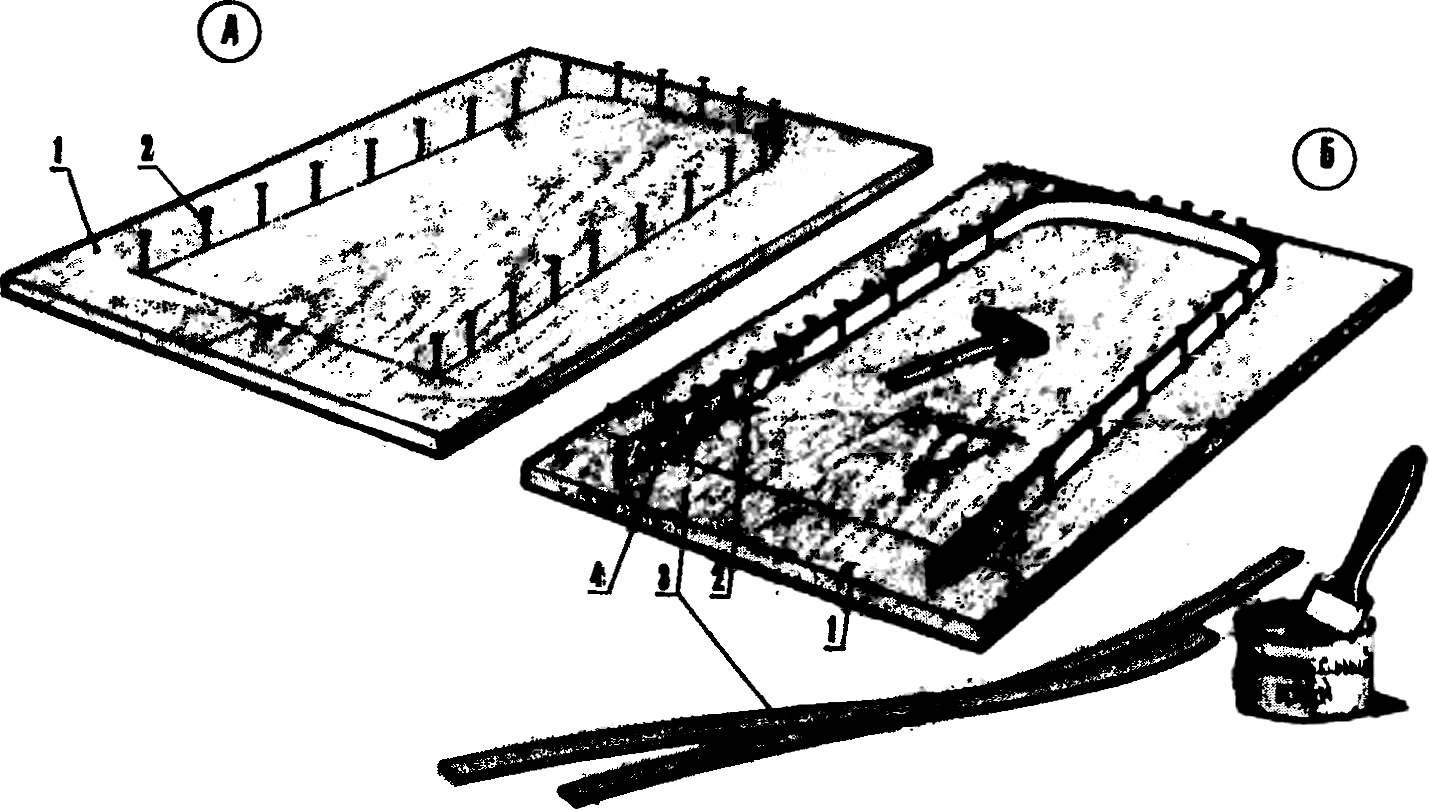 Scheme vyklicky frames and the base of the cab:

After curing of the resin frame is processed with a plane, rasps and sandpaper, and then the entire frame (including window openings) is sheathed with plywood or hardboard; pasted also the partition between the passenger and Luggage compartments.
To secure the hatch and the cockpit Glass (remember — all of them organic), first are cut in the openings of the holes of the appropriate form (you must leave a collar of a width not less than 20 mm), after which the window openings are processed with a file and sandpaper.
A regular windshield has a fairly complex form, so to make it under the frame, repeats its shape, is not easy. But here can help out a method of producing parts with complex shape Villenoy it from plywood strips, pre-cut and customized directly on the windshield.
Carefully processed and vishkarev cabin — both outside and inside, all the external surface pasted with a layer of fiberglass in epoxy resin, after which the cabin again vyshkurivaetsya outside, primed and painted in two-three transition.
To secure the glass, flanging window openings are marked a “Moment” rubber strip and each of the glass is fixed by screws and nuts with plastic washers from the side of the glass.
In conclusion, the cabin inside is pasted over with foam rubber or foam and upholstered with leatherette or artificial leather. Suggest also to take care of the ventilation of the cabin — it is possible, for example, to make the rejected cover in the upper part of the entrance hatch.
V. IVANTSOV, engineer, Voronezh