Doing for a long time, the construction and operation of velomobiles (was a prize winner of all-Union velofestivalya in šiauliai), I was convinced of their lack of practicality. The large size of the velomobile exclude the possibility of its storage in the apartment. Known foldable construction is complicated to manufacture and quite cumbersome. Used them on wheels, usually a Bicycle, not designed for the lateral loads experienced by the velomobiles on the bends.

The desire to reduce the dimensions of the recumbent assembled led to the idea of creating a vehicle based on a bike with a side trailer. Such structures are known, but they exhibit the same drawbacks as the velomobiles, since the trailer is rigidly mounted them to the bike. In the developed embodiment, the side folding trailer; it is equipped with a horizontal hinge in the plane of symmetry of the Bicycle, connected to them using quick disconnects. Another feature consists in fixing trailer wheel on the console vertical hinge (piano type).
To the frame of the Bicycle trailer is secured by two clamps (POS. 2 and 3 in the figure). A horizontal hinge in the plane of symmetry of the Bicycle provides the ability to tilt in curves and “swing” of the trailer on rough roads. Mutual angular displacement facilitated by the self-aligning wheels rotate around a vertical hinge. 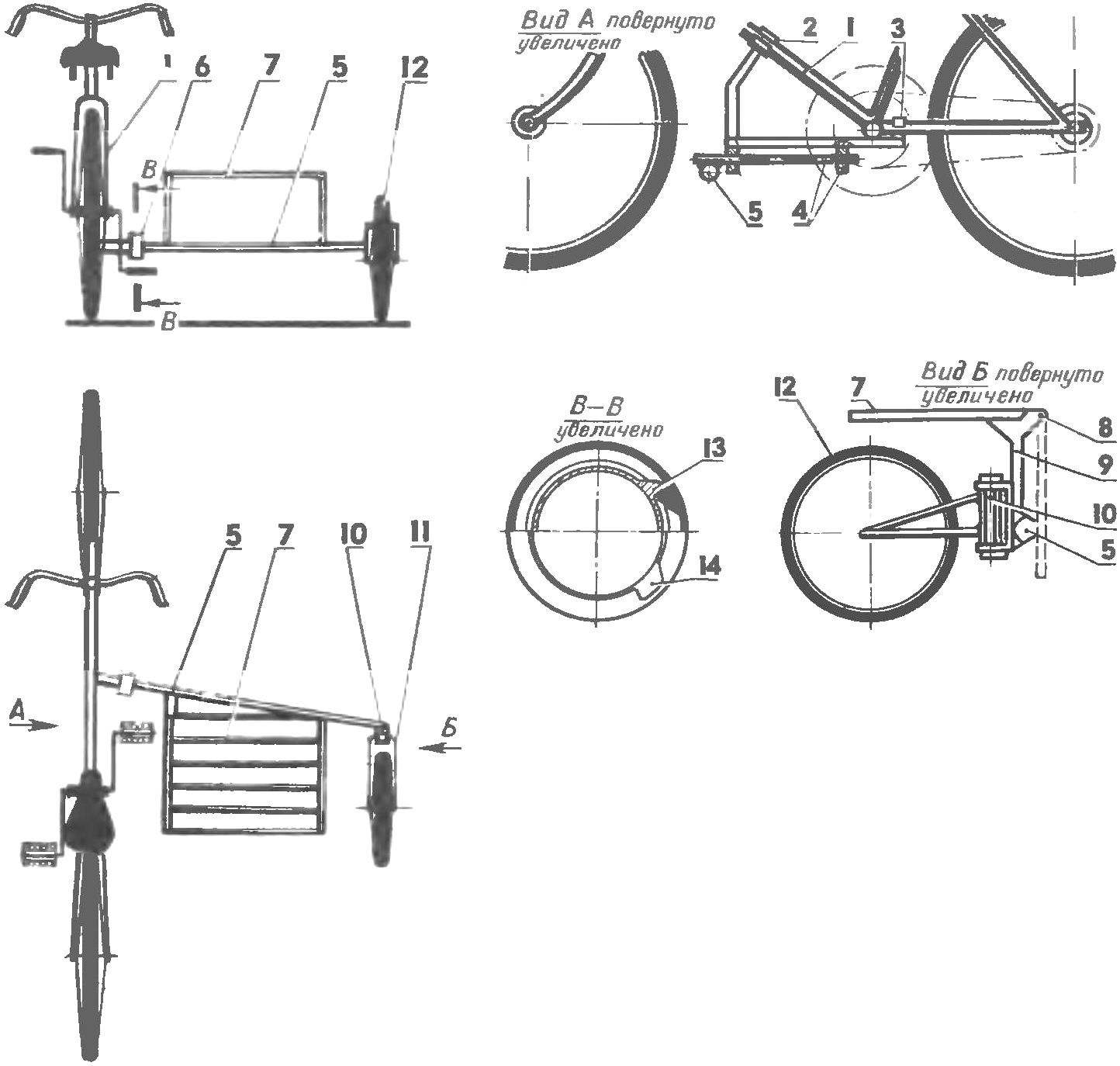 The scheme side of the trailer and its installation on the bike:
1 — the frame of the bike, 2, 3 — retaining clips 4 — hinge horizontal, 5 — the frame of the trailer, 6 — bayonet connector, 7 — load platform trailer, 8 — joint, 9 — stand, 10 — vertical hinge, 11 — console, 12 — wheel trailer 13 lug bayonet connector, 14 — groove bayonet connector.
The side of the trailer folded.
For folding load platform tilts 270° forward. Frame is moved 90° around a horizontal hinge while turning it into quick-release bayonet connection in a counterclockwise direction. The trailer wheel under its own weight is dropped down. Thus the wheel, and a platform for goods to be in the plane of the bike without going across the width of the dimensions of the rudder. In this position, the tabs bayonet connection will coincide with the grooves, and if necessary, you can disconnect the trailer from the bike. This operation takes a matter of seconds.
Folded lateral dimensions of the trailer does not exceed dimensions of a Bicycle wheel that enables storage in cramped urban conditions.
The technique of driving with a trailer is no different from traffic on a conventional bike. The presence of hinged connections in the vehicle eliminates side loading on the wheels when tilting the bike. To improve ease of use (when driving at low speed in the Parking lot, loading) provided with a catch locking swivel.
The trailer can carry all possible loads, the big stuff (TV, fridge) or use it as a passenger. Its own mass to 10 kg payload capacity more than 100 kg. the Trailer can be operated with any serial bike, the only difference is the mounting bracket. With intensive use with “Fireworks” within six months there was not a single failure. Believe it to be an indispensable vehicle for gardeners, residents of rural areas, and for many residents too.
I. GRITSAEV, Klimovsk, Moscow region.