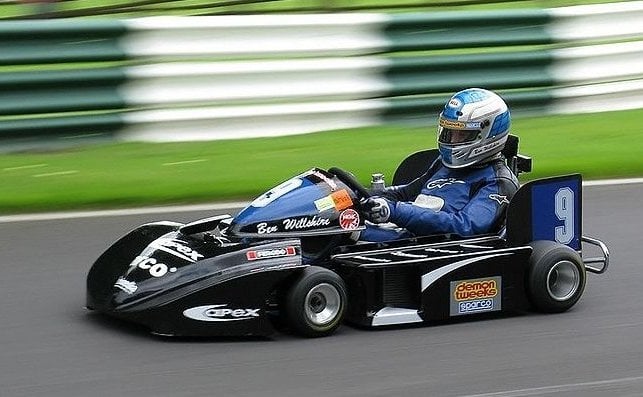 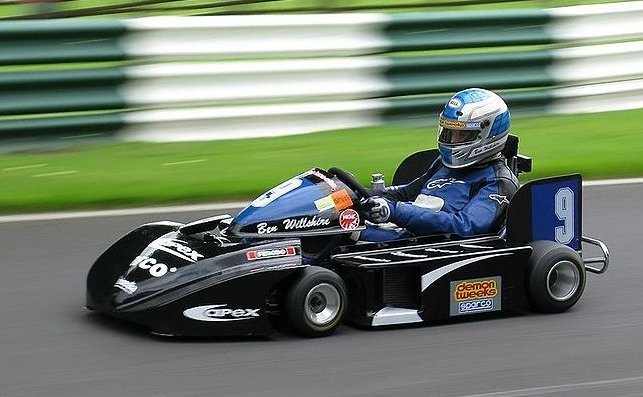 Since the invention of engineer D. Zimmerman of the GDR flat disk of the spool to control the inlet of the working mixture in two-stroke engines, slide valve gas distribution has found wide application in racing engines for many leading companies.
The use of the valve allows to the asymmetric phase of the inlet of the working mixture and the advantageous shape of the intake tract by shortening its length and increasing radius turn the flow of the working mixture. Under other equal conditions, it gives the opportunity to achieve greater filling ratio of the cylinder with fresh mixture, and hence more power.
Work on boosting the engine, providing the installation disk of the spool, of course, more complicated than the same operation with a piston gas distribution. But spool the engine is easier to choose the optimal phase of the beginning, end and duration of intake. This engine is easier to adjust for maximum power and throttle response.
The article describes a high-powered racing motor with spool distribution based on mass-produced domestic motorcycle engine “Sunrise” with a displacement of 175 cubic inches.
Speaking on the map with this engine, the author in 1973 and 1974, has repeatedly won prizes at the winter Championships of the USSR and RSFSR. The engine is created in the experimental laboratory of micro cars of the Kursk Palace of pioneers.
ENGINE PERFORMANCE
Maximum power, HP — 24, at 8800 Rev/MIA.
Torque on the shaft KGM — 2,73 (max.).
The geometric compression ratio of 12.5.
Diameter of cylinder, mm — 60,5.
Piston stroke, mm — 60 working volume, cm3 — 172,4.
Spark advance, before TDC mm — 3,2.
Carburetor: Mcet with a cone diameter, mm — 28.5 in.
Candle: 14-15 FALLEN, Lodge — 49 or COP-28.
Fuel: gasoline B-91 mixed with oil MS-20 in a ratio of 1 : 18.
The engine used without rework, almost all the details of the transmission, the trigger and the left case cover. To increase the reliability of the transfer site used a double-row chain, engine sprocket, clutch drum and input shaft from the engine To the sports-175 SC with a gear ratio of 1 :2,75. The device and the location of the main elements of the engine shown in figure 1. 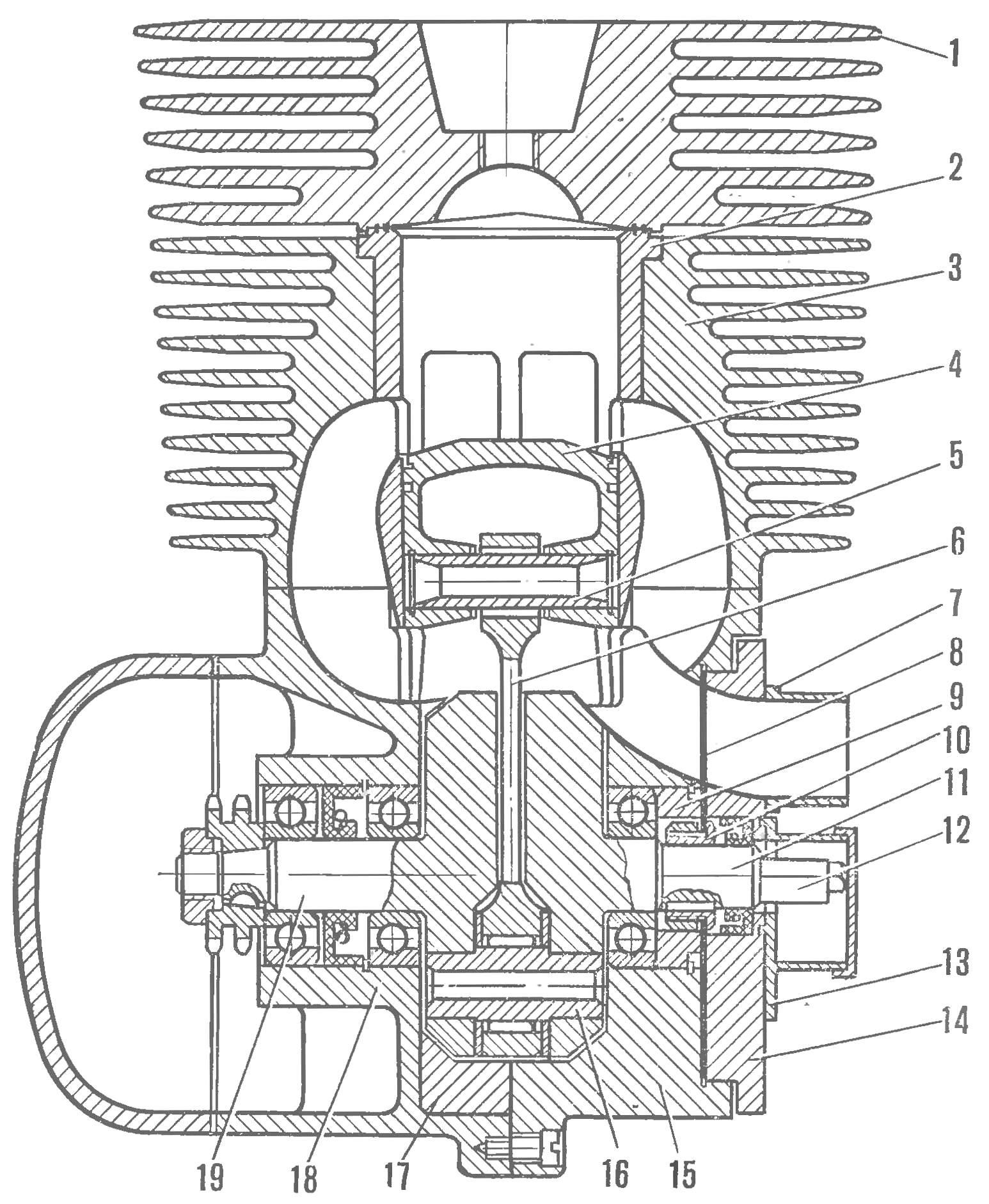 Fig. 1. The motor section (rear view):
1 — cylinder, 2 — sleeve; 3 — shirt cylinder; 4 — piston; 5 — finger; 6 — rod; 7 — a branch pipe of the carb, 8 — valve; 9 — spacer; 10 — bushing mount valve; 11 — the right half of the crankshaft; 12— Cam of the circuit breaker; 13 — the case of the circuit breaker; 14 — cover Zolotnik camera; 15 — right half crank chamber; 16 — finger of the crankshaft; 17 — ring crank chamber; 18 — the left half of the crankcase; 19 — left side of the crankshaft
The crankcase is subjected to significant alterations. From the mating plane of the cylinder left half of the crankcase was cut to a size of 79 mm, measured from centre of bearing seats of crankshaft (Fig. 2). New the mating plane should be strictly parallel to the old one.
Around the neck of the cylinder on the left half of the crankcase (where indicated by the arrow) is welded aluminum alloy in such an amount that the gasket manufactured according to the specified in figure 3-dimensions of its left half everywhere relied on the metal. The welding should preferably be carried out using argon-arc welding machine. Then milling it is necessary to align the mating plane of the cylinder.
In the crank chamber of the left half of the crankcase pressed into the ring made in accordance with figure 4. The place of its installation is shown in figure 2. It is sometimes necessary to pre-machined crank chamber on a lathe to give it the correct geometrical form. In order to avoid turning ring is fixed with two screws M5. Part of the ring, protruding into the neck of the cylinder, is removed by using a boring head on a milling machine.
Both the plane of the connector converted the left half crankcase it is necessary to grind on the iron plate. Satisfactory is considered to be such a plane, which, being washed from lapping powder, it has a smooth matte surface and controlling the movement of the plate touches it in all points. 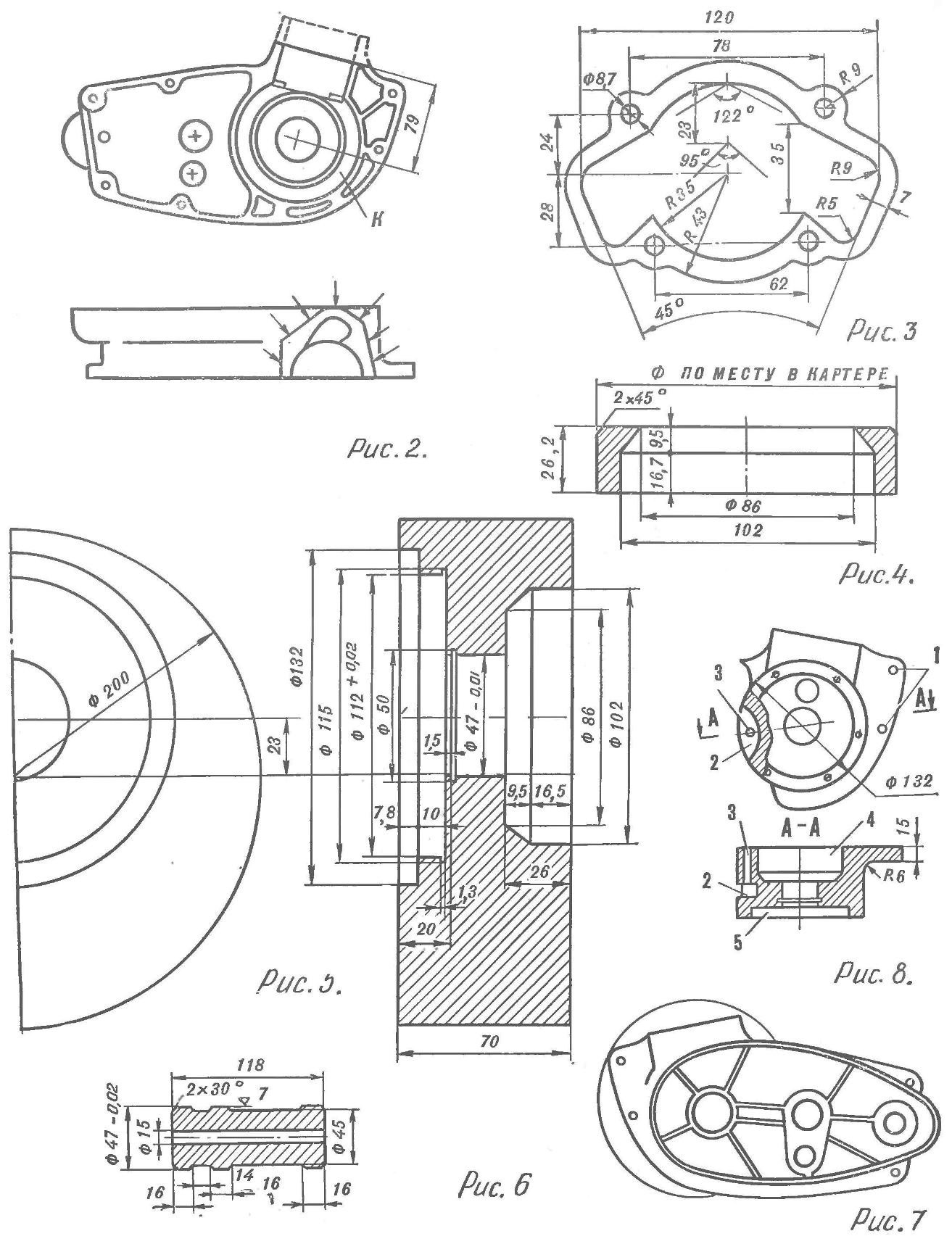 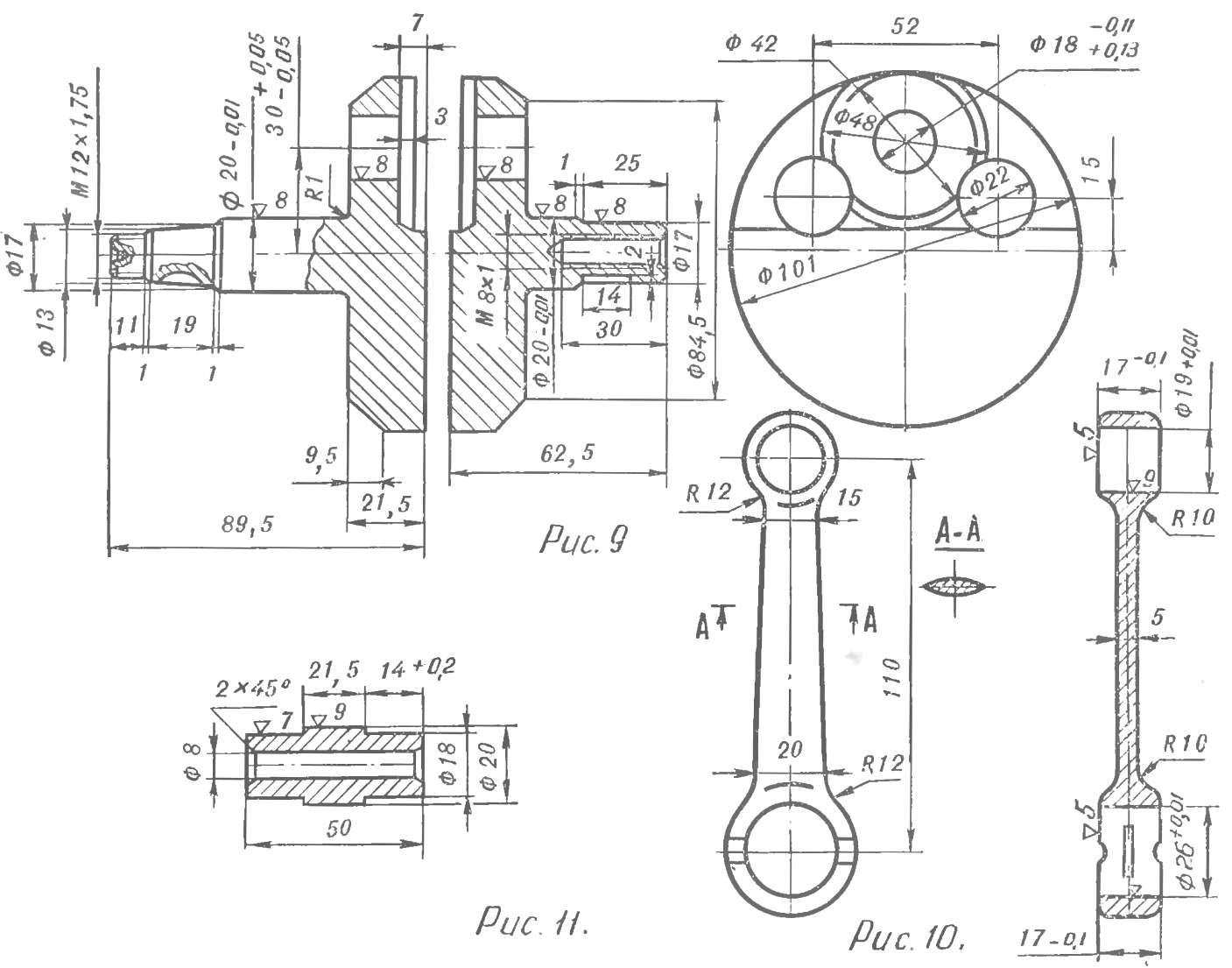 Fig. 9. Crankshaft.
Fig. 10. The connecting rod.
Fig. 11. Finger.
The coefficient of balance of the shaft chosen for the momentum close to the maximum of 0.65. (Measurement of the coefficient of balance crankshafts racing engines can be found in the book by A. N. Silkin, and B. S. Karmanova “Manual of motorcycle mechanics”, Publishing house of DOSAAF, 1970)
To obtain the desired ratio balance balance holes in the cheeks of the crankshaft are filled with tubes of aluminum or magnesium alloy, or caprolon. Selection of material with different specific gravity will allow you to compensate for possible errors in the balancing made during the manufacture of the balancing holes in the cheeks of the shaft.
In the upper end of connecting rod-used needle bearing without cage, with needles Ø 2 mm and a length of 17 mm. Axial displacement of the needles ±1 mm is limited by hardened washers of steel U8A 1 mm thick, loosely fitting the piston pin. The radial clearance in the bearing upper connecting rod of 0.01 ÷ 0.015 mm. Piston pin 15 mm diameter used from a motorcycle “IZH-Planeta”. Finger cut the length to size 52 mm.
(To be continued)