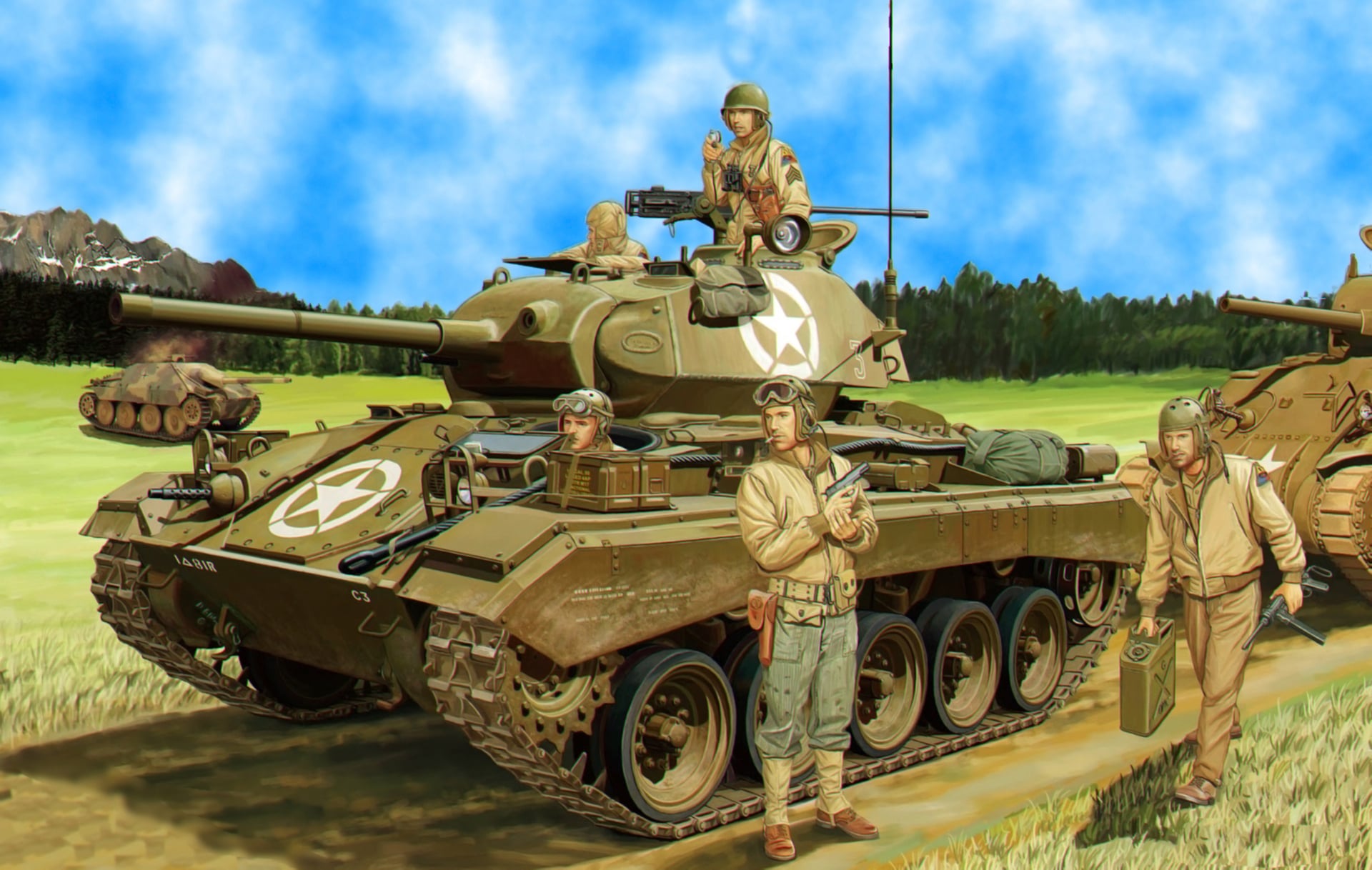 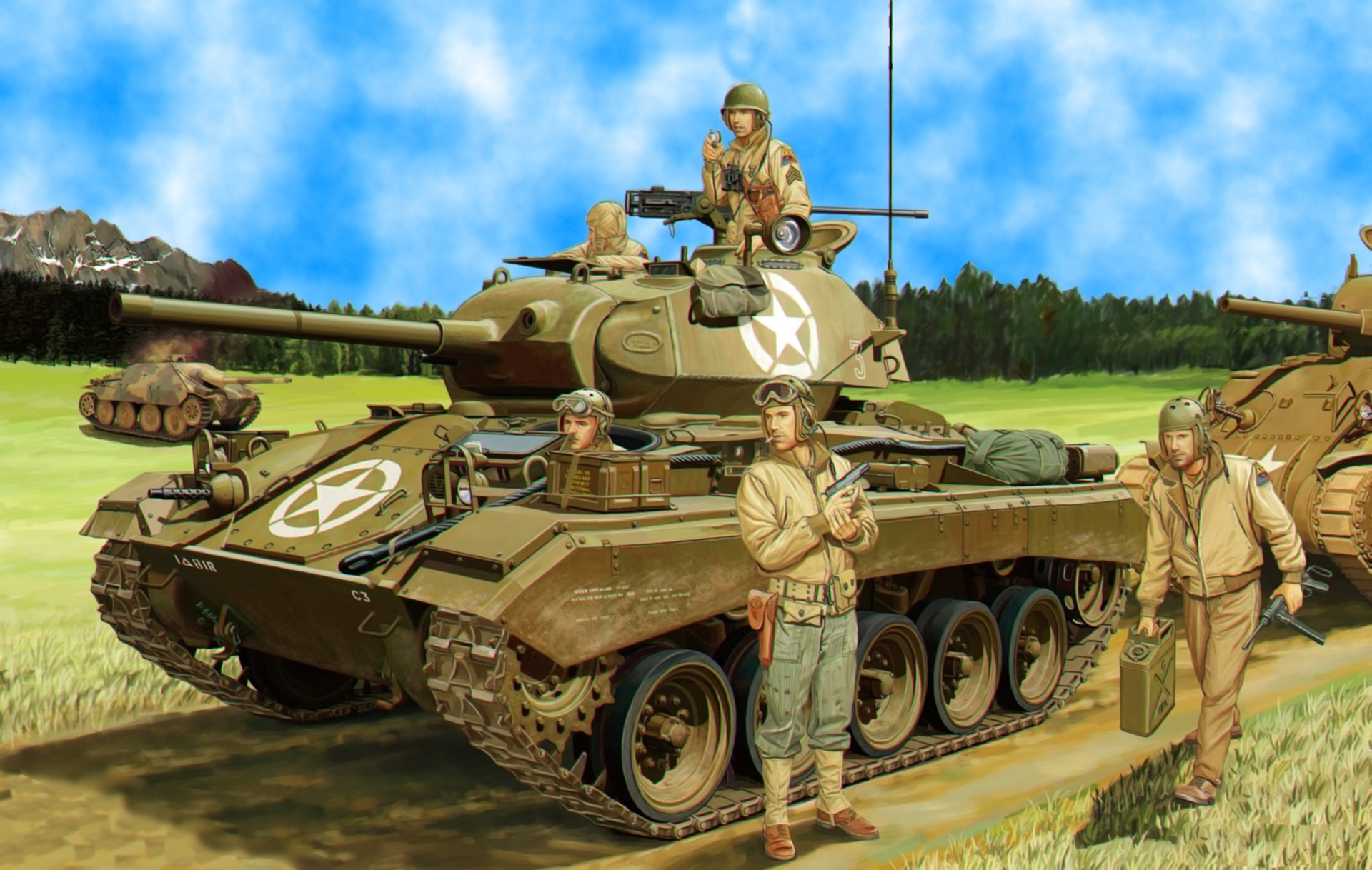 At the end of 1942 armored division of the US army on the state was a third armed light tanks M3/M5 “Stuart”. The weakness of their reservation and weapons quickly revealed in November, when American armored units in North Africa for the first time joined the battle with units of the Panzerwaffe: the fighting machine was completely powerless against medium German tanks.

Taking into account the sad experience of the North African campaign, the Americans went on a significant reduction in the number of divisions equipped with light tanks and reducing their numbers. However, to give up entirely on the use of military vehicles in this class they wouldn’t. On the agenda was a question of creating a new light tank.
In fairness it should be noted that work on the fighting machine designed to replace the “Stuart”, was conducted in 1941. That’s when the state Arsenal in Rock Island began the design of a light tank under the designation T7. Initially, all the experiments designers and engineers focused on engine-transmission installation and workmanship of the hull and turret.
In Rock Island was made four prototype. First — Т7Е1 had fully riveted construction which has been dropped on the next prototype. Tank Т7Е2 got a cast hull and turret. It installed a 9-cylinder radial engine Wright R-975 with a capacity of 340 HP the Hull and turret Т7ЕЗ was made welded, and the power plant consisted of two diesel engines Hercules. Finally, Т7Е4 equipped with automatic transmission company Hydra-Matic and two petrol motors Cadillac. In December 1941, after extensive comparative testing of all prototypes it was decided to choose the option Т7Е2. However, by this time, the military revised its requirements to the service — now the tank would be armed with an English 6-pounder (57-mm) gun.
The US entry into the Second world war, and appeared even limited military experience led to new adjustments: the installation of the 75-mm guns and increased armor thickness up to 63 mm Combat weight is made according to these requirements the tank reached 25 tons as a result of its reclassified from easy to average and standardized under the name Medium Tank M7.
In August 1942, was issued an order for 3,000 tanks M7. Later, however, the military had serious doubts in expediency of this step. The fact is that since February, 1942 from ten U.S. plants had developed the mass-production medium tank M4 “Sherman”, to which medium, but rather, “rides again” M7 had no advantages. Another medium tank of the us army was not needed, order is cancelled, all work on the M7 has stopped.
The failure to M7 only spurred other developers. The design of the new tank in early 1943, came to grips with the specialists of the company “Cadillac” — a major producer of light tank m5a1 variants. The new machine was given the index T24.
Engine-transmission setup for T24 borrowed from the m5a1 variants, and the chassis — self-propelled artillery unit M18. The thickness of the armor plates of the hull have preserved approximately at the level of “Stuart”— 25.4 mm (1′). However, put them under much larger angles, which provides higher sharedetails. New double welded tower streamlined defended 38 -, and 25.4-mm armor. 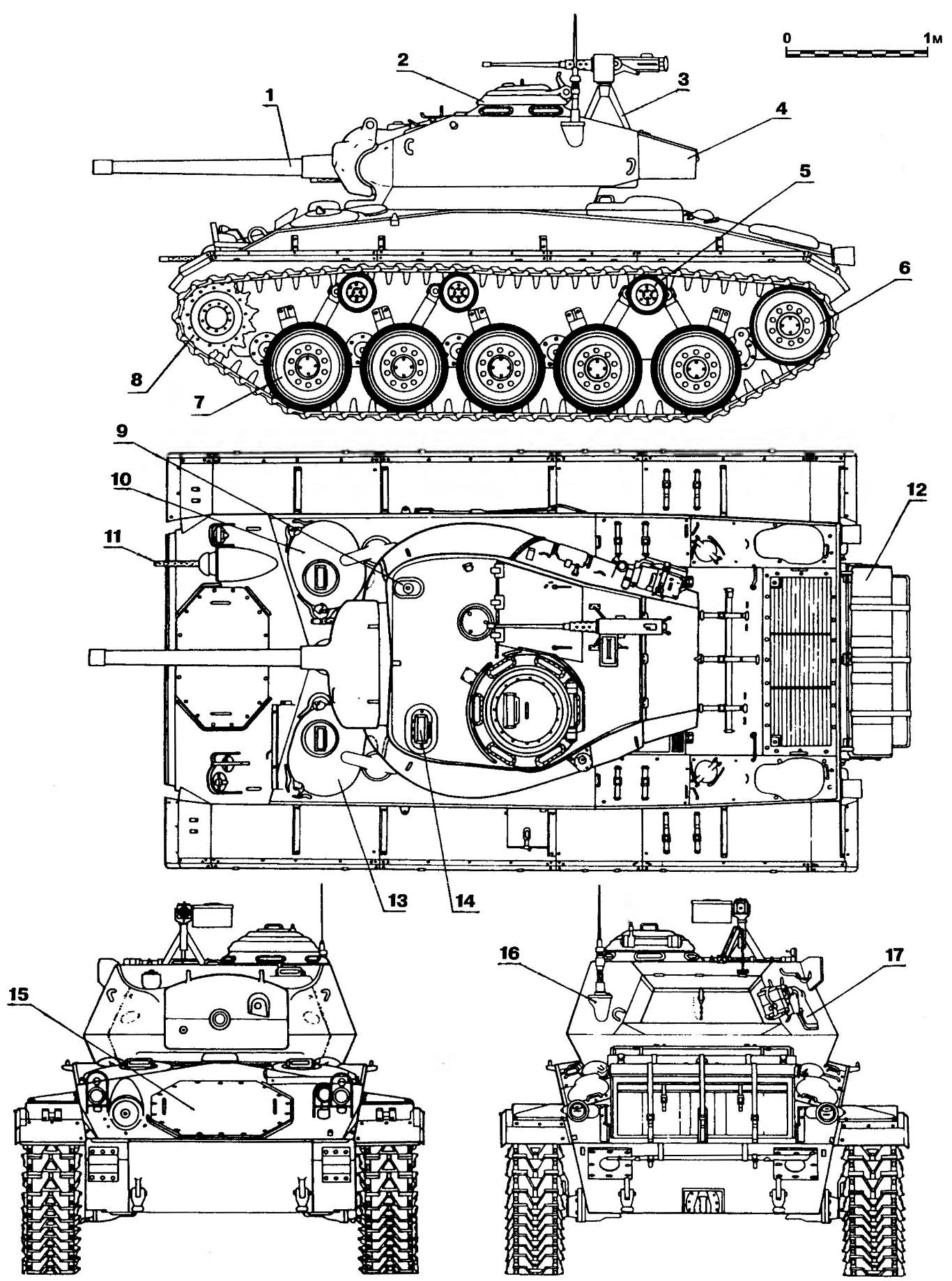 Light tank M24:
1 — 75-mm gun; 2 — commander’s cupola; 3 — install anti-aircraft machine gun М2НВ; 4 — drawer for ammunition; 5 — supporting the rink; 6 — a steering wheel; 7 — support roller; 8 — driving wheel; 9—recess two-inch mortar; 10—Luke gunner; 11 — a machine gun course; 12— installation of canvas covers (in the side view is not shown); 13 — driver’s hatch; 14 — surveillance device with a built-in periscopic sight; 15 — cover of the transmission hatch. 16 — antenna input; 17 — Luke for firing personal weapons
A particular problem was the weapons, the strengthening of which was the main demand of the military. The British offered to equip the tank with its 6-pounder gun, already used on the “Crusader” and “Valentino”, but the Americans rejected this proposal. For T24 decided to use aircraft 75 mm gun, which was mounted on the b-25. This weapon, which had a small mass, could not be better suited for the armament of a light tank.
The first prototype of the T24 was manufactured in October of 1943, and immediately began its intense testing. They ended quite well, and the tank was designated as the index M24. The car has received the name “General Chaffee” — in honor of the founder and first commander of the armored forces of U.S. army Brigadier General, Adia Chaffee.
After some delay related to the testing of the prototype Т24Е1 equipped with alternative propulsion from the ACS M18 — cooled engine Continental R-975C-4, Office of arms issued an order for 1,000 tanks M24, later increased to 5000. The first production M24 was assembled in the factory of the company “Cadillac” in Detroit in April 1944. In June 1945, his workshops left 3300 tanks M24. From June 1944 to the production of “Chaffee” joined works by “Massey-Harris” in Milwaukee. In may 1945, he released the 770 combat vehicles of this type. Thus the total serial production of tanks M24 amounted to 4070 units.
Serial tanks differed somewhat from the prototypes. Changes, however, affected mainly the design of the tower. She received a commander’s cupola with six observation devices, exhaust fan and heavy duty bracket for mounting large-caliber anti-aircraft machine gun.
The tank’s armament consisted of a coaxial 75 mm gun M6 and a 7.62-mm machine gun Browning М1919А4 placed in musk-installing the M64. Another М1919А4 Browning machine gun was mounted in a ball mount front plate of the housing. In the roof of the tower was installed 50,1 mm martika for firing smoke and shrapnel mines, and on the roof is a 12.7 mm antiaircraft machine gun Browning М2НВ.
Feature of the gun was a concentric arrangement of recoil devices spring-hydraulic type relative to the barrel. They were enclosed in a hollow cylinder, through which passed the barrel of a gun. When fired, the barrel, sealed with hill-start assist devices, moving in the cavity of the cylinder, simultaneously performing the role of a guide when you roll back and roll forward. This design gave the opportunity to significantly reduce the dimensions of the breech of the gun. The length of the rollback in this case was reduced by almost half. 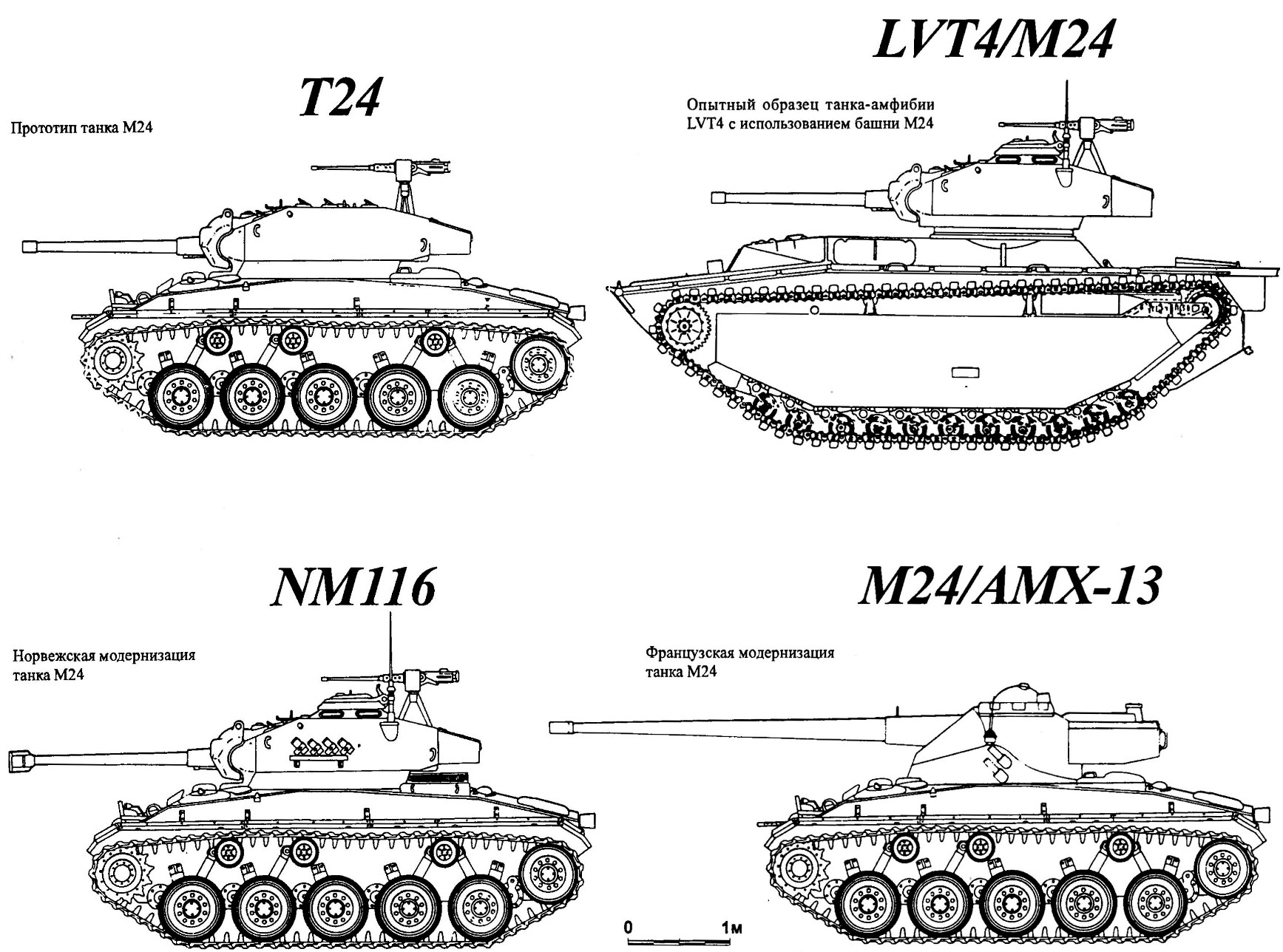 The gun was equipped with a gyroscopic stabilizer guidance in the vertical plane of the company “Westinghouse”. A gunner was situated to the left of the gun had a telescopic and telescopic-periscope sights. Vertical control was operated manually, and horizontal (turret) — with manual and hydraulic actuators. Arm control the rotation of the tower were the commander of the tank, and when working it will automatically shut off the drive gunner. Ammunition of the tank consisted of 48 artillery rounds, placed in containers, the so-called “wet” ammo rack, 440 rounds 12.7 mm and 3750 — 7.62 mm.
On the tank the M24 and M5 series tanks, equipped with two V-shaped diesel 8-cylinder liquid-cooled engine of the company “Cadillac”, which was mounted in the rear of the tank. Their total capacity is 220 liters .with. (2×110).
The torque from the motors through two fluid couplings, two planetary gearbox with hydraulic control is transmitted to the single two-stage gearbox (dual) with manual gear shift. From demultiplicator torque is transmitted via a propeller shaft passing under the rotating floor of the tower, rotation mechanism, which served the double cylindrical differential, and then through a single-stage side gears to the drive wheels, located in front of the tank.
The units of the power transmission (gearbox and clutch) tanks M24 structurally similar units of the power transfer tanks series M5. The difference was only that in gearboxes M24 was missing planetary unit reverse, which was due to the mechanism of the reverse shift stage, and were installed pedal neutral required for noiseless and shock-free switching dual.
Feature of M24 was also the presence of redundant actuators control the tank from the gunner (assistant driver). And in the fighting compartment was an additional (fifth) a seat for the commander of the unit.
The tank was set individual torsion-bar suspension and sloped telescopic shock absorbers unilateral action on the 1st, 2nd, 4th and 5th supporting rollers.
To ensure a constant tension in the crawler track when the movement of the tank over rough terrain between the crank guide wheel and the rear balancer carrier roller carried by a rigid connection of the compensation traction.
The tank was installed radio SCR-538 and tank intercom for five subscribers.
At a combat weight of 17.6 tons, the tank has a top road speed of 55 km/h. cruising range was small — 160 km.
Since the summer of 1944 tanks the M24 started to enter the army and rapidly forced out of combat units obsolete “Stuarts”. M24 combat debut took place in December 1944 in part 740 th tank battalion of the 82nd airborne division, during the reflection of the German offensive in the Ardennes. These battles showed that neither the armament nor the reservation “Chaffee” could not compete with German medium tanks. And while fighting through new American cars and recorded several padded “Panther” and even “tigers”, this luck can be attributed to the accidents. However, the M24 is quite heavily used by the Americans and British (the latter has received from the U.S. nearly 300 vehicles of this type) until the end of the war. 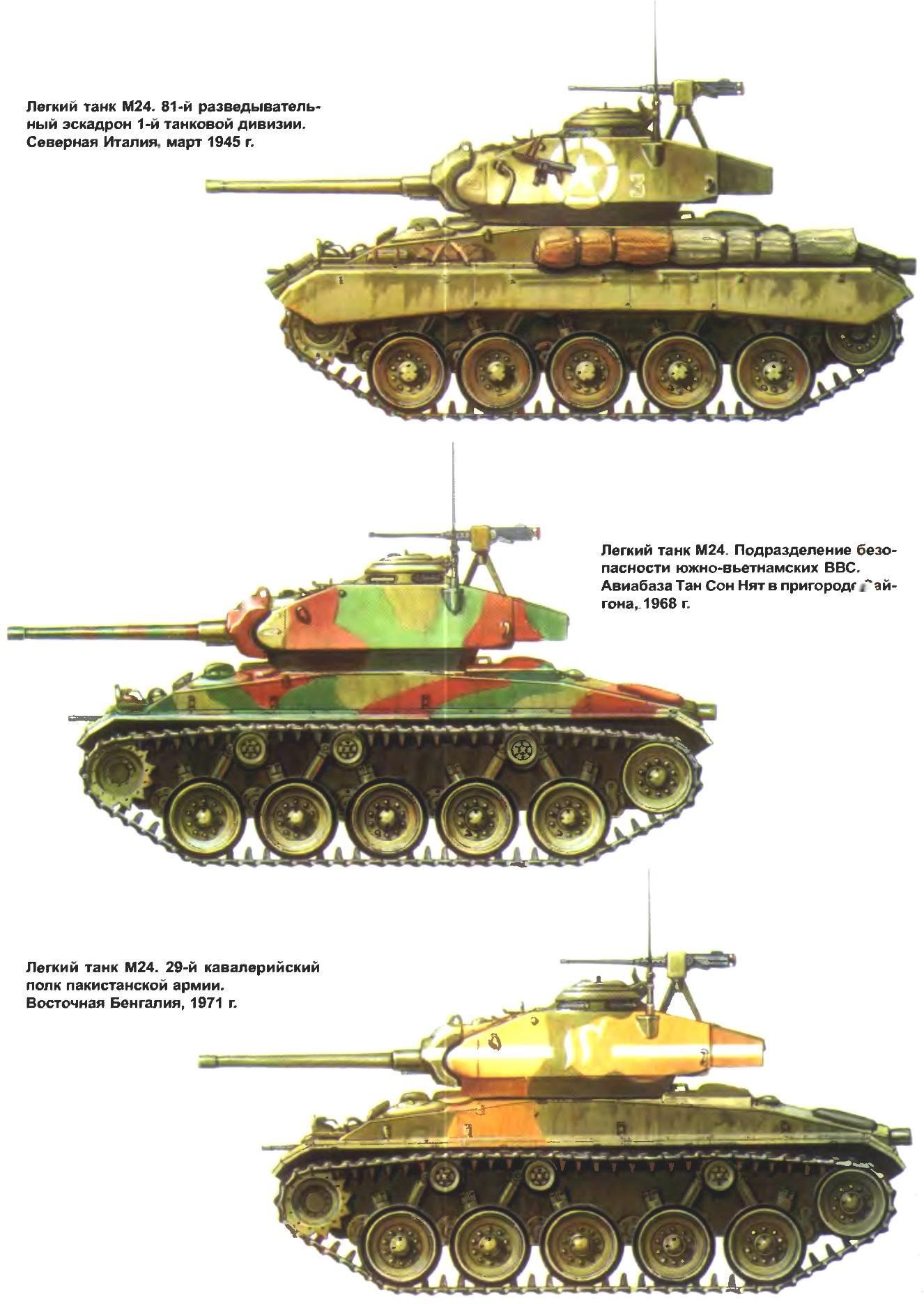 When transporting by air tower “Chaffee” was supposed to be transported inside the aircraft C-54, and everything else on the external sling. Only the emergence of a transport aircraft C-82 carrying capacity of 10 tons allowed to transport a tank without a turret inside the fuselage. Because of the complexity of transportation M24 not found wide application in the airborne troops of the U.S. army.
The tank served as a base to create multiple samples of self-propelled artillery.
After the second world war the M24 was used by U.S. troops in Korea, and the French army in Indochina. In 50-ies of the tank was exported intensively and for a long time was (and in some places still is) in service in Greece, Norway, Pakistan, Portugal, Taiwan, Thailand, Turkey, Uruguay and Vietnam.
In different countries attempts have been made to upgrade the M24. For example, the French, it has significant number of tanks of this type, tried to establish in the “Chaffee” tower from your light tank AMX-13 with a powerful long-barreled 75-mm gun.
The most successful upgrade was the Norwegian. By order of the army of that country from January 1975 to October 1976, was upgraded tank 54, which received the designation NM-116. They installed a French 90-mm gun D925 and laser rangefinders. Paired 7.62-mm machine guns were replaced by 12.7-mm. machine guns Coursework eliminated along with seats for gunners. Instead, they deployed additional combat pack of 20 artillery rounds. On both sides of the tower mounted on four West German smoke grenade launchers. Two petrol engine was replaced by one brand diesel Allison 6V-53T 250 HP was Replaced and the gearbox and suspension used hydraulic absorbers. In addition, when modernization has taken into account the climatic conditions of Norway: the power plant is equipped with preheaters, provided the heating device on the floor of the fighting compartment. For the convenience of charging a part of the ammunition was moved in a niche of the tower.
This upgrade is actively offered on the foreign market countries, which had adopted the M24, in particular, Taiwan. But because of the obsolescence of chassis buyers to it was not. At the beginning of 1990-ies tanks NM-116 began to retire of the army of Norway, and is currently a member of its armed forces, they are not included.
M. KNYAZEV